Here’s 7-2, 7-4 and 7-5-1938. In 7-2, I would swear that Garge used this joke before, in the 1920s. In 7-4, a double reconsideration results in inaction, sounds like the federal government, doesn’t it? In 7-5, I love the personification of “conscience” in the third panel, and the staging on floor planks. I love the hole in the floor, maybe that’s where “conscience” exits and enters. This seems to convey that Garge thought of this idea as a parenthetical aside, so it takes place in “the wings” of the strip, or off-stage.

Aw, c’mon have a coupla more!

Here’s 6-30 and 7-1-1938. When the anti-smoking police get down cutting out all of the smoking scenes in all the old movies and cartoons, maybe they will get around to the old comic strips! Krazy’s gang all seem to love a good stogie, even if it’s used! 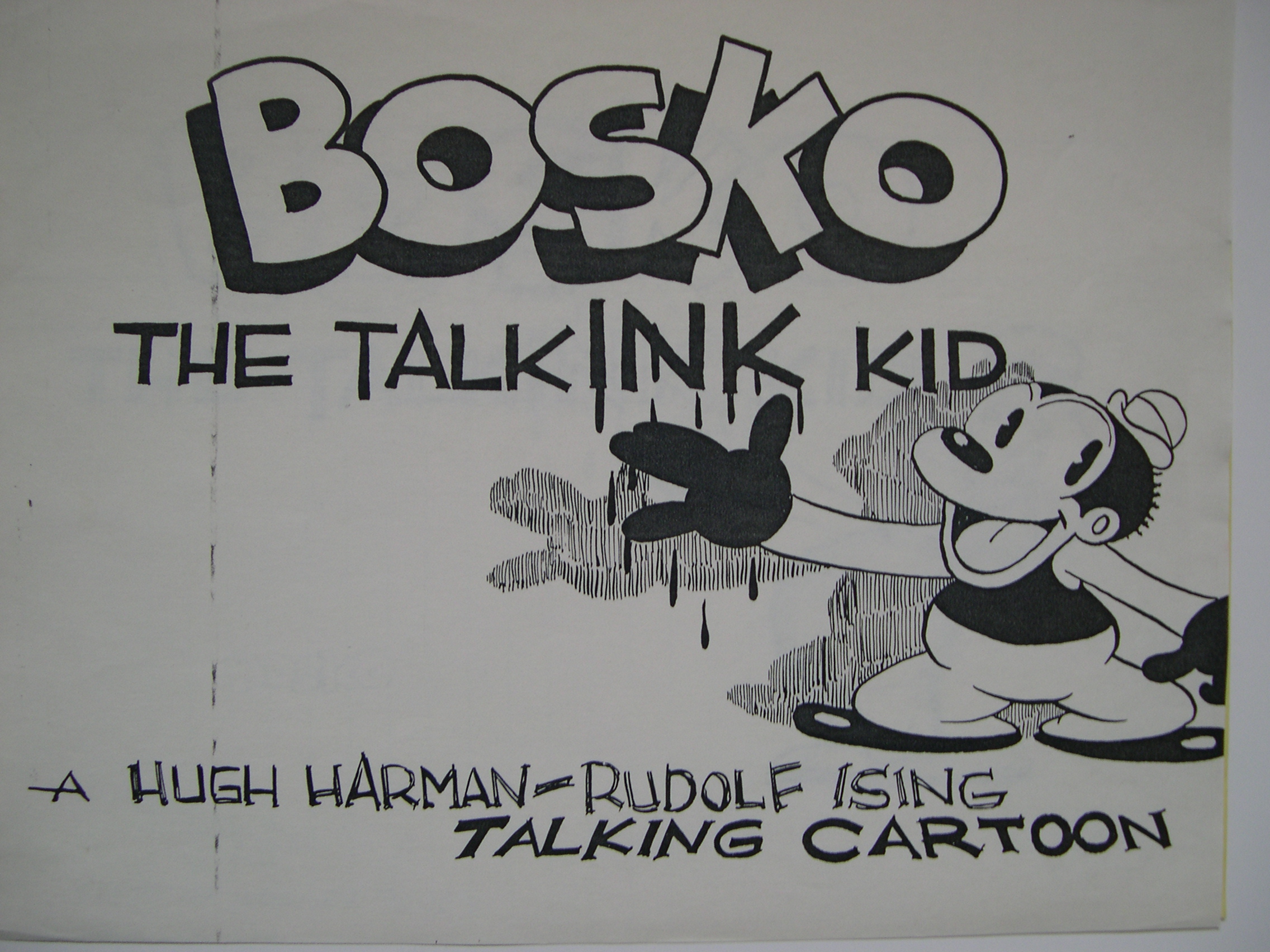 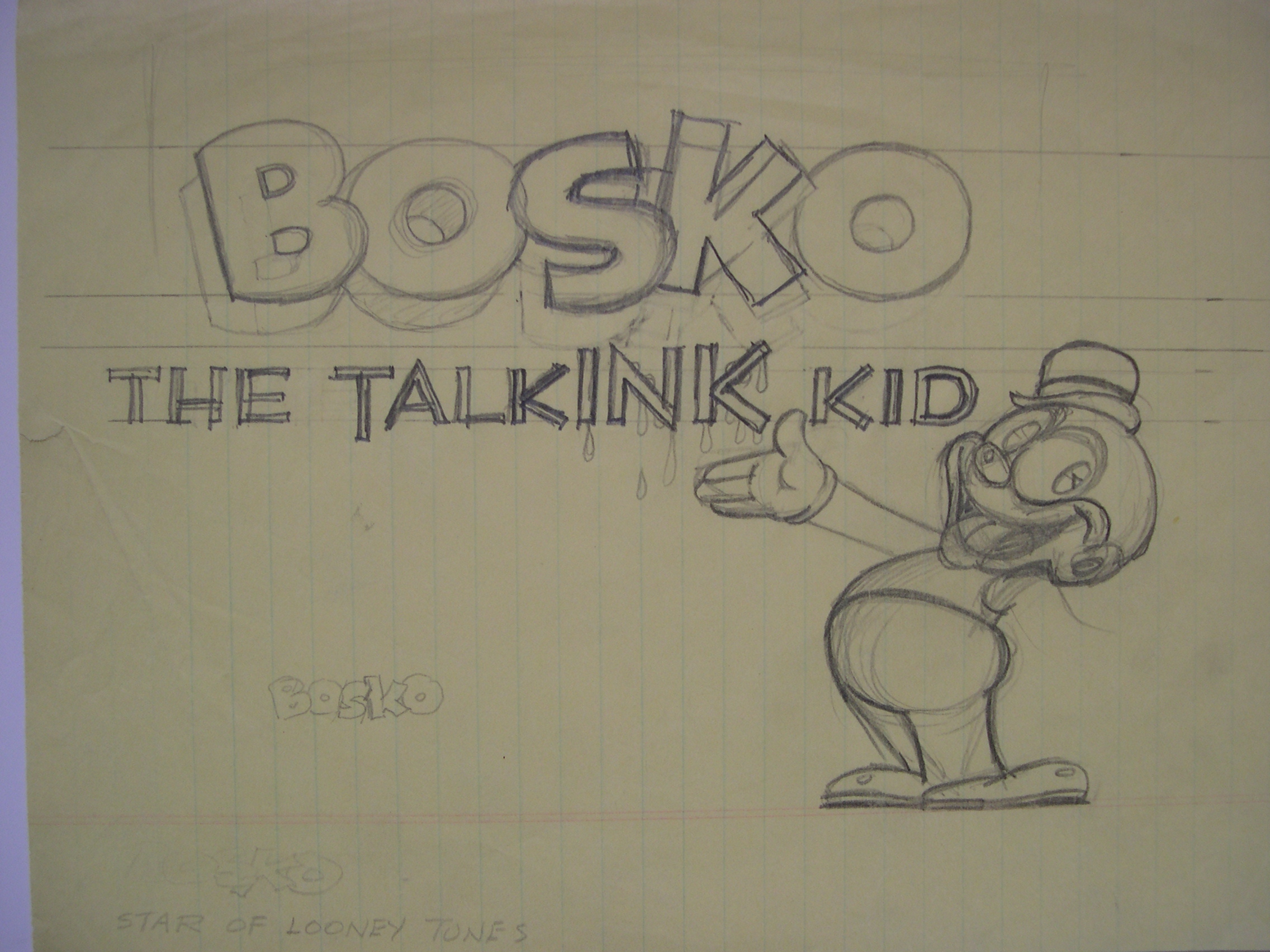 What a great experience it was to get to know Hugh Harman. In the early seventies, Bob Clampett introduced me to Hugh. It was a lot of fun to eat breakfast or lunch with him at his favorite restaurant, The Old World in Beverly Hills. However, Hugh did not live in Beverly Hills, but in an old apartment building on Selma and Cahuenga in Hollywood. Hugh preferred to come over to my house, or meet me in Beverly Hills. He did not own a car, took the bus everywhere and never invited me to his rooms. You see, he was poor. I tried to help him by selling artwork he had from the Bosko comic strip of the thirties, and some Red Ryder prints that his brother, Fred Harman had created. Hugh would always bring something every time he came over, like a sack of donuts. Then he would borrow a hundred dollars or so. Up to the time I met him, no print of the legendary Bosko pilot: “The Talk-Ink Kid” existed. Then mysteriously, a nitrate copy turned up out of a friend’s garage. We made a safety negative in 16mm, but the print had no main or end titles. So Hugh designed the main title (the sketch on yellow lined paper). I then re-drew and inked the design to look like the earliest model of Bosko (sketch on white paper). Hugh was pleased with the result, but I can’t remember if we ever photographed the title cards or not. Later my friend Dave Butler, made a final negative and put the new title cards on it. I just recently saw a copy of “Bosko the Talk-Ink Kid” on DVDr and I saw my titles on it. All the memories of Hugh Harman came back, and I smiled. Can you imagine how much fun it was to work with one of my childhood heroes, creator of such a beloved character as Bosko? It always amazed me how tough Hugh was on himself, and in how little esteem he held all the great old cartoons he had helped to create, except for “Peace On Earth”, one of his MGM cartoons. What an honor to have known him, and to have helped him out a little. It’s a sobering thought to know that such a key creator and one of the greatest animators of the 1920s lived the last years of his life in such reduced circumstances. He didn’t save his money, and was forgotten by Hollywood. Residuals for animators! 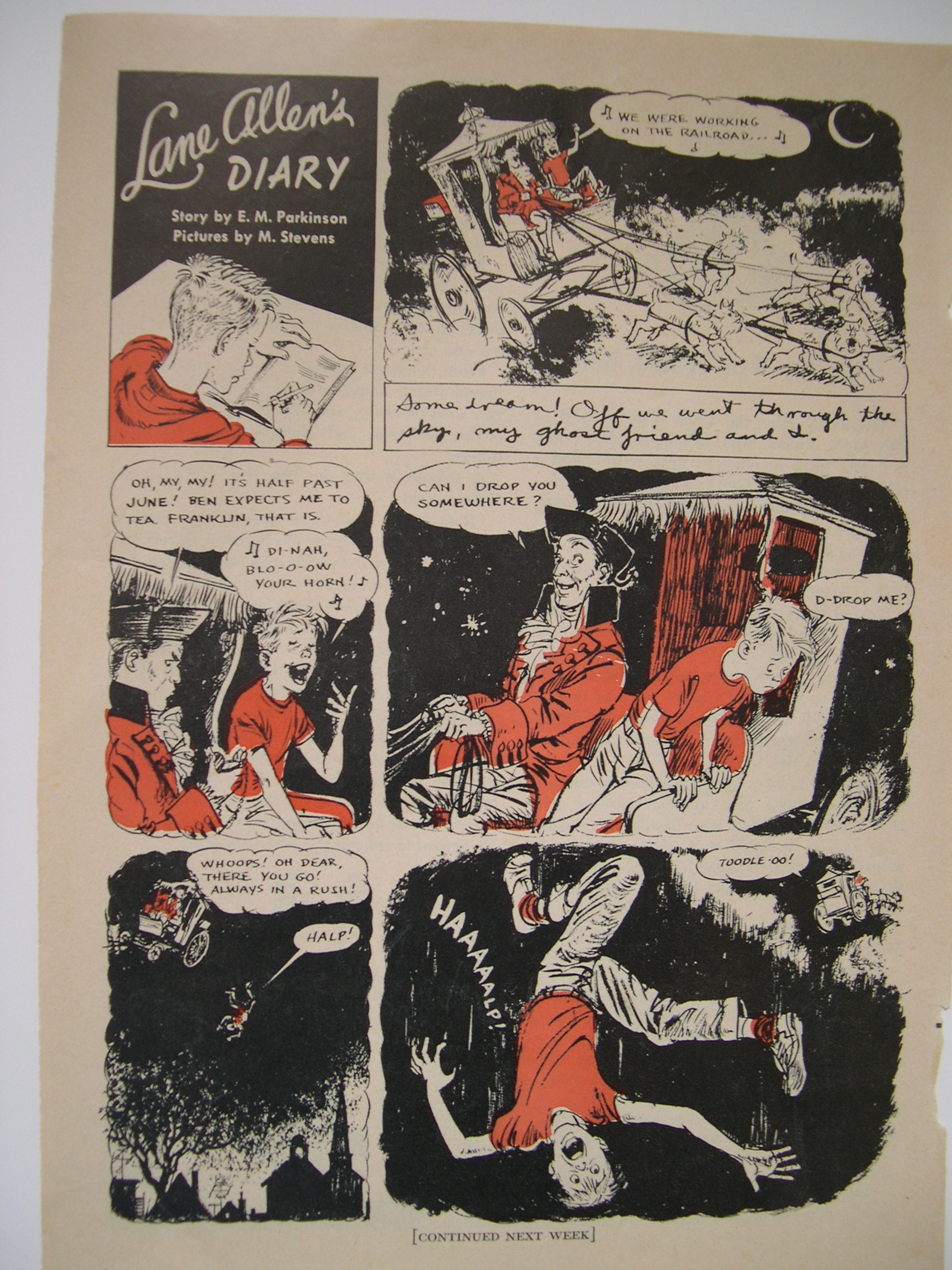 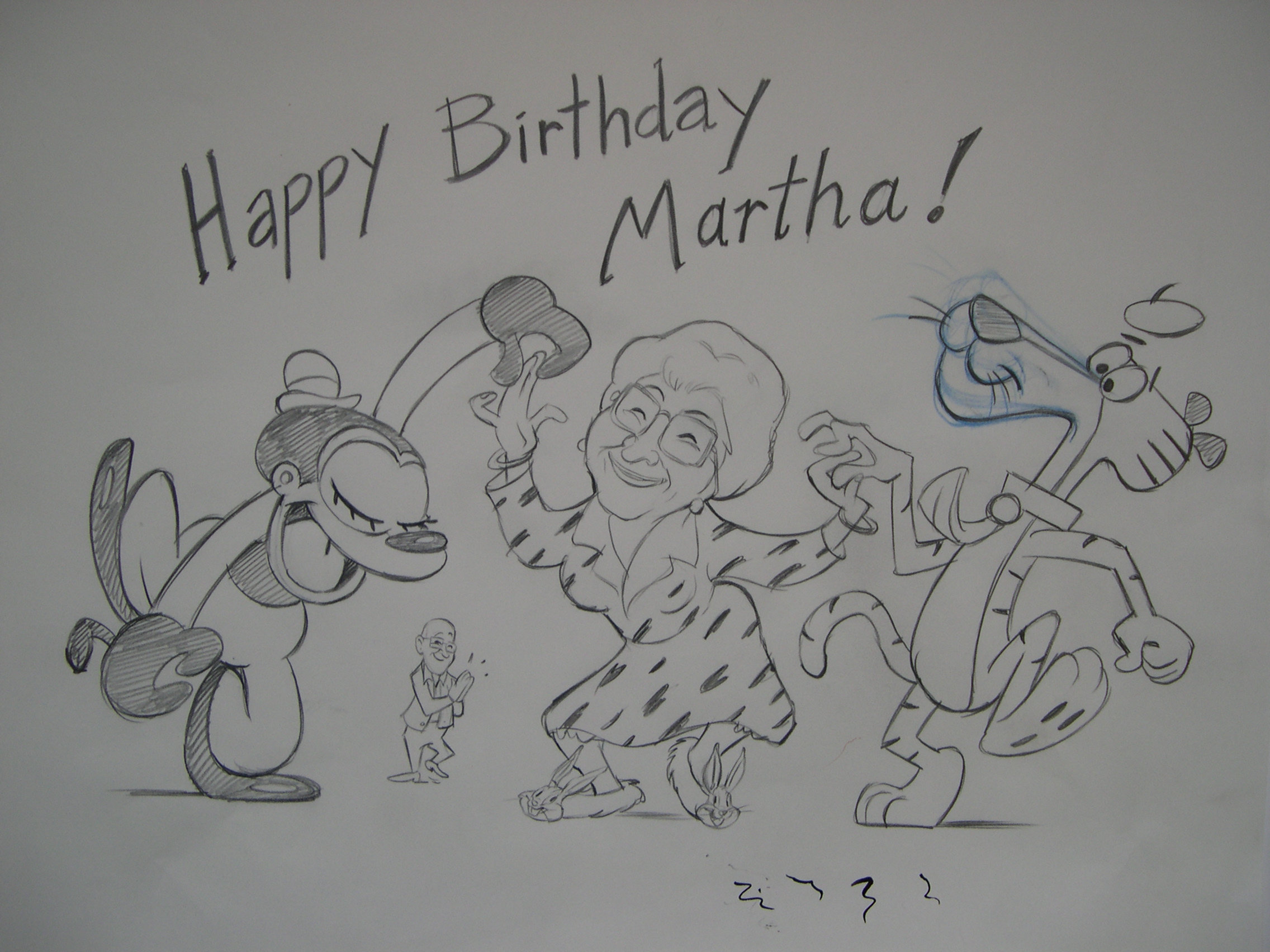 Here is the pencil ruff I made on Martha Sigall’s 90th birthday card. I thought it would be fun if she could be dancing with the first and last theatrical Looney Tunes and Merrie Melodies characters. Her husband Sol is keeping time in the background. Martha has the inked and watercolored final card. Thrown in are the next episodes of “Lane Allen’s Diary”, (still looking for info about this feature, how about it, Stripper’s Guide?) and KK.

Here’s today’s Krazy. My wife Cathy and I went to Martha Sigall’s 90th birthday party in Culver City on Saturday. Martha, asÂ you know, is one of the last living links to the Schlesinger and MGM cartoon studios, having worked as an inker and production supe at both shops. Of course, you know her book: “Living Life Inside the Lines”, highly recommended. She had so many guests, both family and cartoonists, that she scheduled her party in two shifts, 1-3 PM and 3-5 PM. A lot of us stayed a little after 5, like until 6:30! One talented member of Martha’s family put together a 9 minute video of family photos, concluding with an image of 100s of photos morphing into a great portrait of Martha’s face. I did a little drawing of Martha for her birthday card, I’ll post it when I get a chance. Tom Sito and Art Leonardi also did personal cards for her. What a great time we had!

No wonder Offisa Pupp’s been absent, too many robin jokes! I love that monument with the Indian runes in panel four!

Sorry I was too tired last night to post.Â  Here is the next episode of our Krazy, 6-22-38.Â  Pretty good “mistaken identity” gag. The birds seem to be taking over the strip this week.

A sterling example of Garge’s cross-hatching and scraping techniques. He scratched through his ink on the bristol board to get the drops and lightning effect in the fourth panel. Herriman loved Scotch Terriers, (heÂ was owned by two of them)Â so he put a Scotty in this strip. The tall dog resembles an aardvark with long legs. Herriman’s umbrellas and parasols are always funny props. Good night now!

IÂ love the design of the dog with the fedora and cane, he may have been a caricature of a late 30s celebrity. Note the subtle play on words going on here.

Always, Ofissa Pupp intrudes on Krazy’s conversations, understanding and completely misunderstanding them at the same time.

By the way the poem: “The North Wind Doth Blow” (AKA “The Robin”) was written in the 16th century by Anonymous, and did he or she write a lot of poetry! 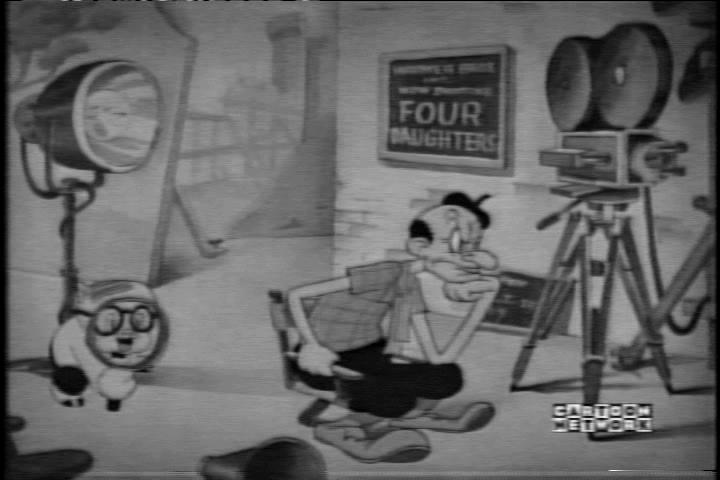 This is a jpeg image from “Porky’s Movie Mystery”. It is the last frame of a scene which is mysteriously cut-off. Porky as “Mr. Motto” is investigating the Phantom on a movie set and comes up behind a director sitting on a director’s chair. On the wall behind him is a sign reading “Warmer Bros. presents Four Daughters”. I wonder how this gag originally finished, and was it cut from the original negative? Maybe this will come out uncut on a Golden Collection someday, but until then, wha hoppen?

The Mystery of “Lane Allen’s Diary” 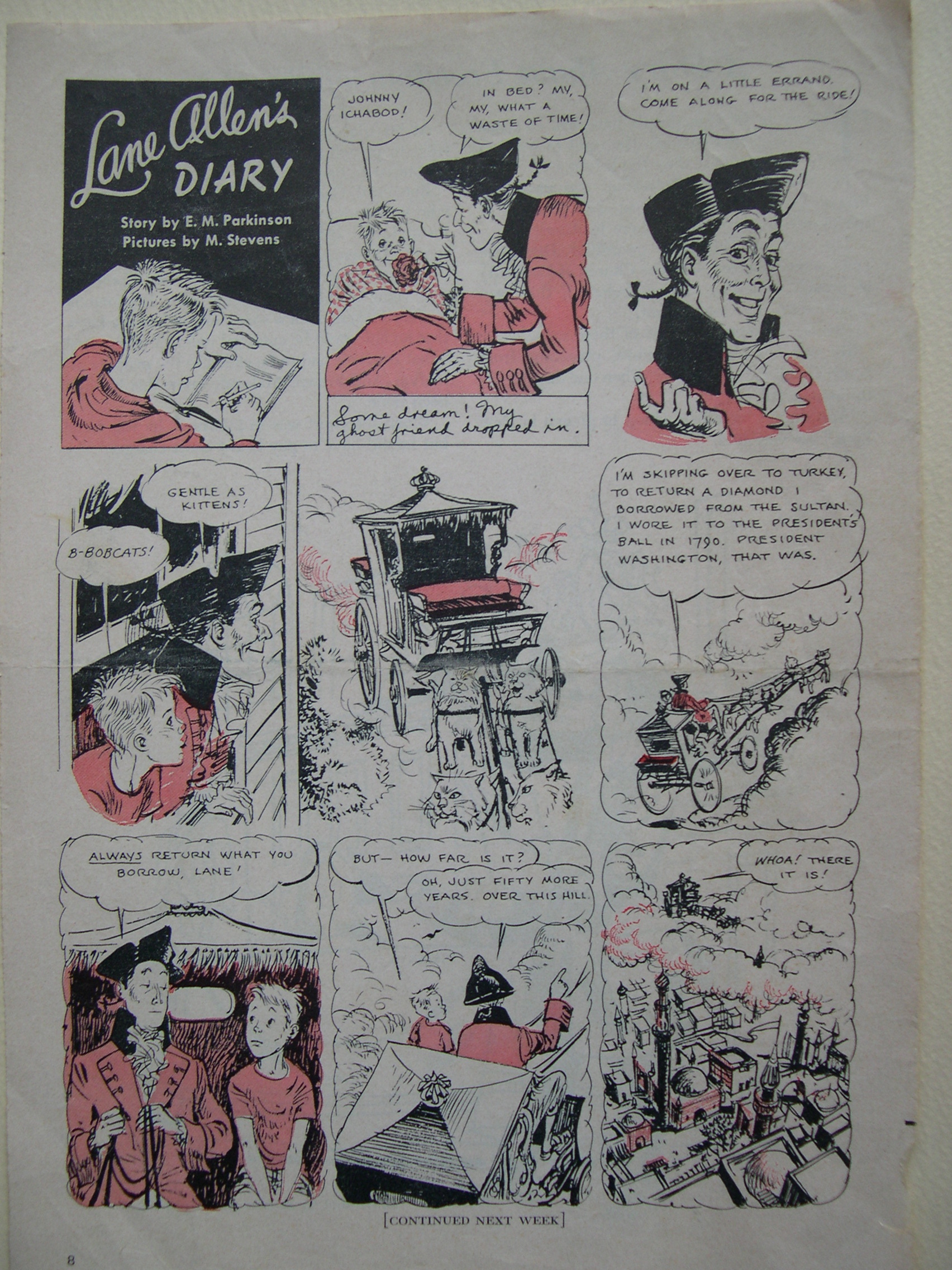 I saved a bunch of these pages from some obscure kid’s religious or inspirational mag. when I was a kid. I have always loved the drawing and the imaginative stories in these, the diary format puts you inside Lane’s head in many instances.Â  Who is “M. Stevens”, who did the art? Does anybody know anything more about this comic? It’s kinda fun posting this kind of stuff, nobody’s stopped me yet! Wheeeee!

Hope you all had a great Easter and Passover, we had Matzos and ham! Of course you all know that Garge is referencing the poem: “The North Wind Doth Blow and We Shall Have Snow, and What Will Poor Robin Do Then, Poor Thing? He’ll Sit in the Barn, and Keep Himself Warm, and Tuck His Head Under His Wing, Poor Thing.” I don’t know offhand who wrote the poem, do you?

To me, Garge is a god. I spent hours and hours as a child with the few examples of the strip I could get from the library, just copying Herriman’s LETTERING. I loved the way he made his “E”s. These late 30s Kats were my favorite drawings of Krazy and company. Years later when Cathy and I visited the Navajo Tribal Park in Monument Valley and saw the formations I was in Herriman Heaven. We also saw what remained of the old Wetherill Dude Ranch where Herriman and Jimmy Swinnerton used to stay. My favorite monument? “The Thumb”, what else?