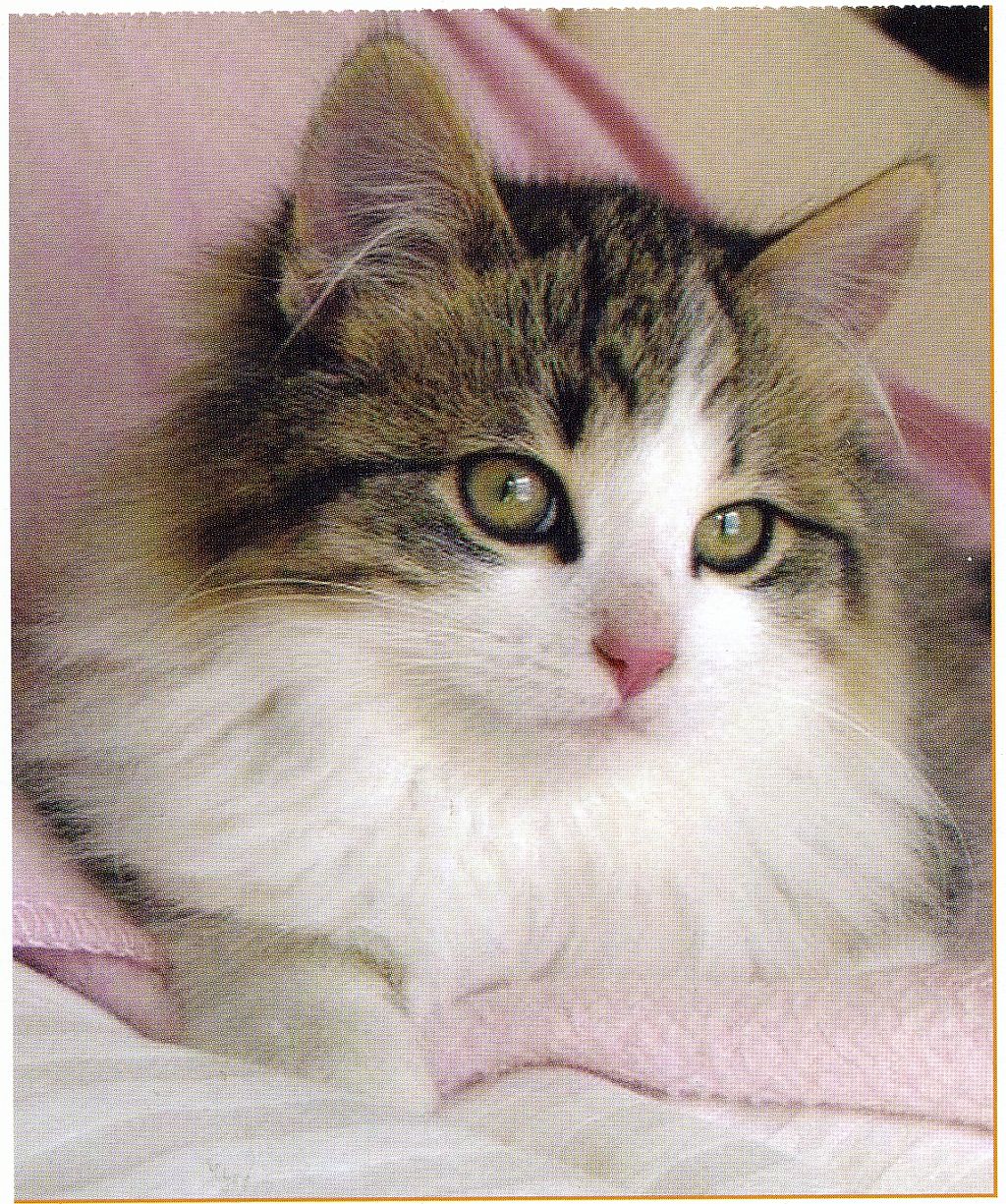 Â Cathy loves this little girl. Her name is Rosebud and she’s a rescue. She fellÂ from the back tire of a bus in Springfield, Illinois, to the horror of two women who took the 8 week old kitten to a local animal shelter. She was adopted by Teresa Gregoir, who says that Rosebud has become the “bosscat” of her two Toms at home. The affectionate Rosebud likes to roll on her back and look up as if to say: “Look at me, I’m beautiful!” She has a face to launch a thousand kits!

Â Felix is from 1-8 to 1-14-33 this time. In the Sunday, Messmer has fun drawing outlandish dogs and rabbits for a Magician’s act. In the dailies, Felix is jealous of little Doris, Danny Dooit’s new love. We’ll see if the spirit of altruism hits Felix next time and he will accept Doris as a pal.

Â Myrtle is from 10-11 to 10-17-1948 this batch. No Hyacinth this time. I like the 10-13 as Myrtle’s Mom lolls all over the easy chair like a teenager figuring out a math problem. Bingo is funny in the 10-16 as he wears all of the necktie salesman’s product. The Sunday is a flight of fancy, as Freddie dreams that he is back in prehistoric times, complete with a dinosaur. 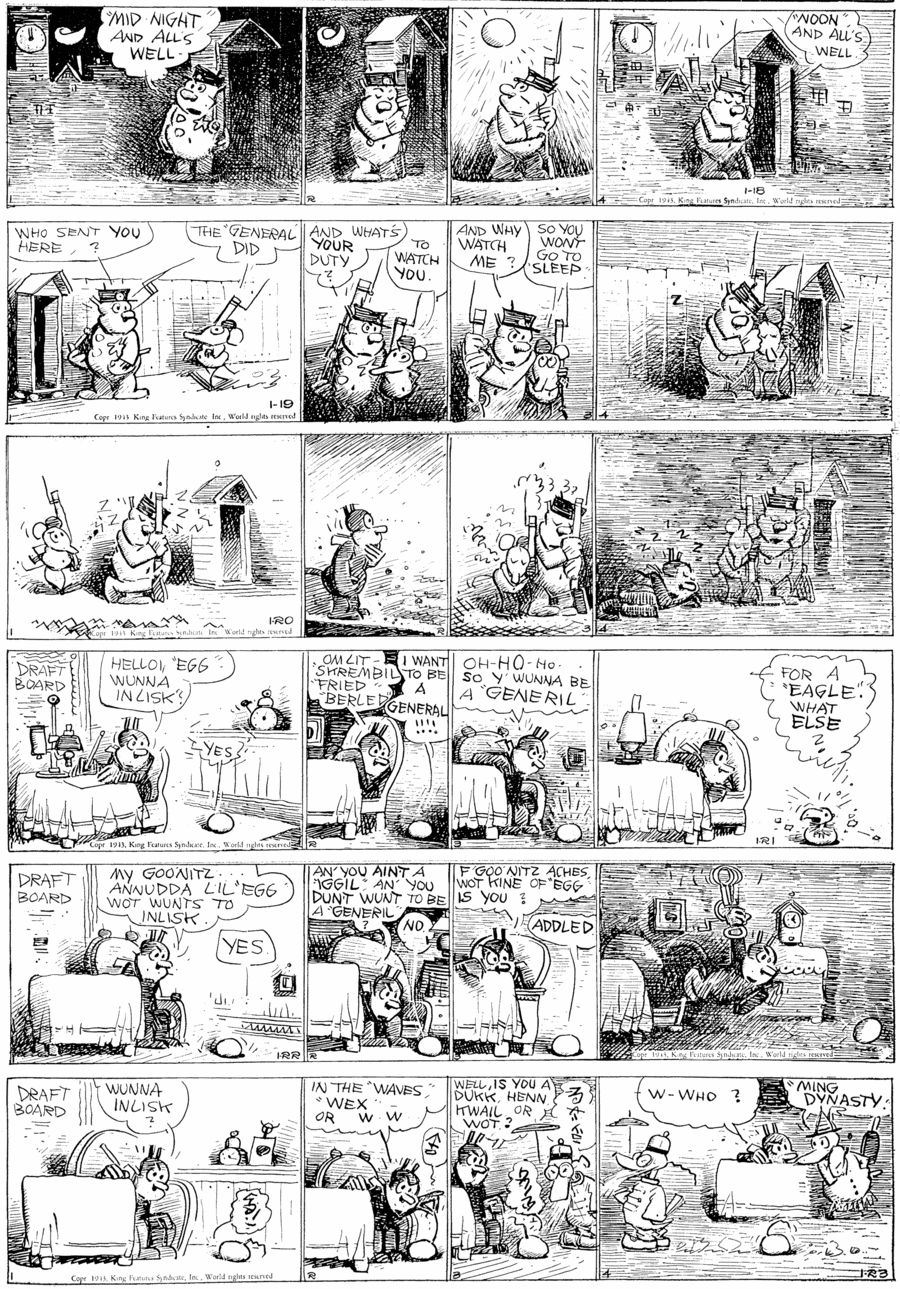 Â Krazy is from 1-18 to 1-23-43 on this tour through the Coconino. The first three strips are about a guard shack and a sleepy Offissa Pupp, and the final three revisit the Draft Board as Krazy tries to rob the coop by drafting eggs, including an “addled” egg and a Chinese thousand year old Duck egg. Herriman is beginning to blend his brand of nonsense with the topicality of the war.

Felix projects back in time to Jan. 1, 1933! He is once again the family pet of the Danny Dooit family and having his problems with space and feline respect. Felix could be a fanciful adventurer and traveller, but his 1930s strips were really family strips, the most common and most profitable newspaper comics format. In the 1920s, domestic situations were less common, but by the time of Bringing Up Father, and even more so, Blondie in 1934, a cast of Mom, Pop and 2 kids were comic gold. Sometimes Felix is crowded out of his own strip by the family or machinations of the human characters. We’ll see how he prevails in 1933.

Â Speaking of family strips, here’s Myrtle from 10-4 to 10-10-1948. My favorites are the 10-8 and 10-9, as Myrtle is reduced to knitting at home as Sampson deserts her for a Boy Scout meeting, and when Myrtle is given the go-by as Sampson declines to offer her a ride on his new bike. Her retort is pure Dudley Fisher: “I hope you fall off and break the continuity!” Hyacinth the Cat is not with us this time, not even in the Sunday page, as Myrtle performs an unlikely Juliet to Sampson’s Romeo in amateur theatrics.

Â Krazy dailies are from 1-11 to 1-17-1943 and continue to reflect World War 2. Krazy is now in charge of the Coconino draft board and is trying to recruit early birds, worms, snipes and several comical dog characters. I especially like the dogs in the 1-14 and 1-15 strips, as they remind me a bit of Segar’s Wimpy. These dogsÂ are the type to dive for half-finished cigar butts, like Uncle Willie in the Moon Mullins strip and Barney Google in his down and out phases.