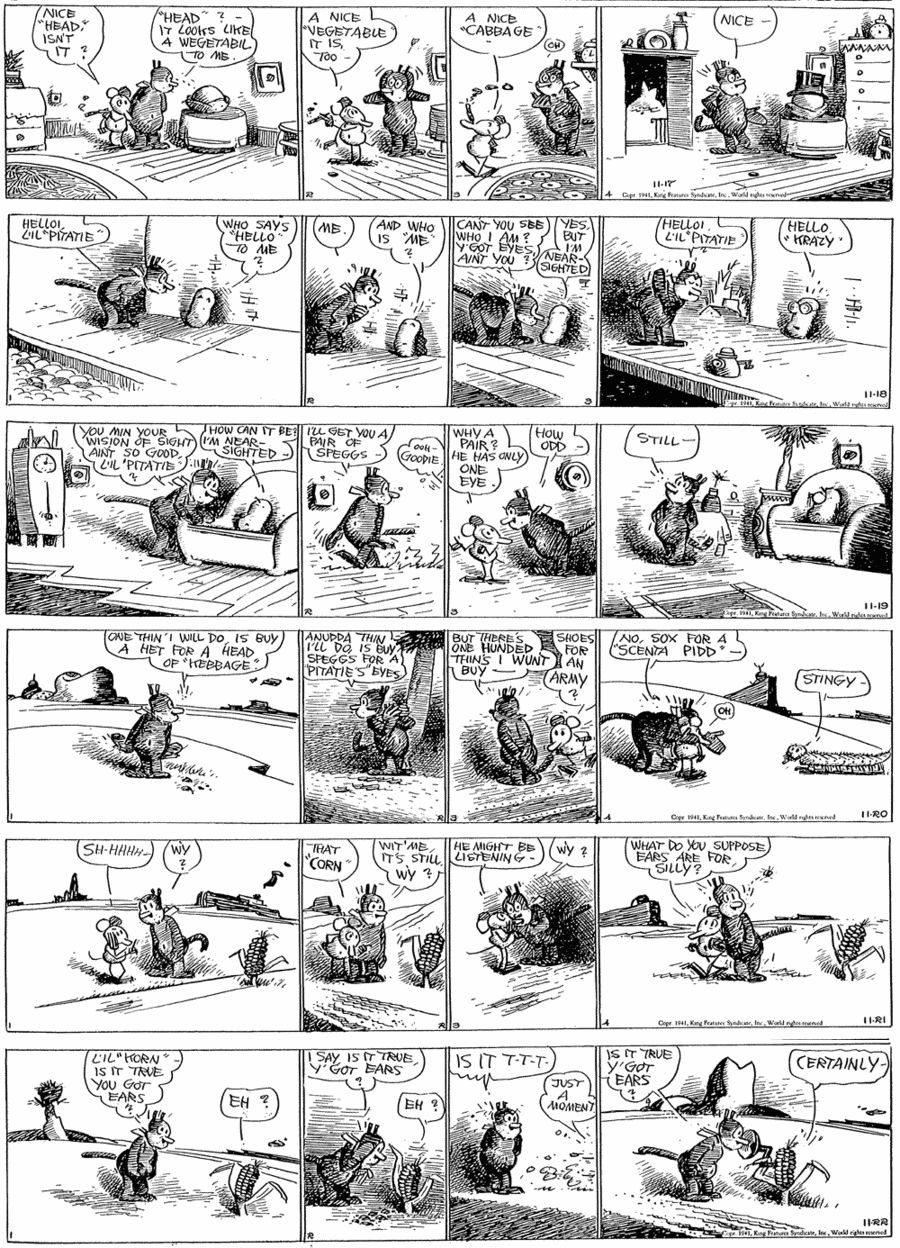 Â In Myrtle, from 8-11 to 8-16-1947, Dudley Fisher maintains some continuity as Snoggons mails Myrtle’s braid back to her in the 8-11, writing to her that he “loves another now”. Bingo continues to use his door opening abilities to his advantage in the 8-13, as he raids the refrigerator for Popsicles. There is a deft reference to radio sound effects as Sampson and Myrtle trick her Mom into thinking she is washing her face by creating the sounds of washing, using a Hollywood sound effects kit that Sampson received from his uncle (8-15 strip). Those of us who grew up outside the era of dramatic radio don’t prize the ability of a good sound effects technician, but Myrtle sure did, in 1947!Â 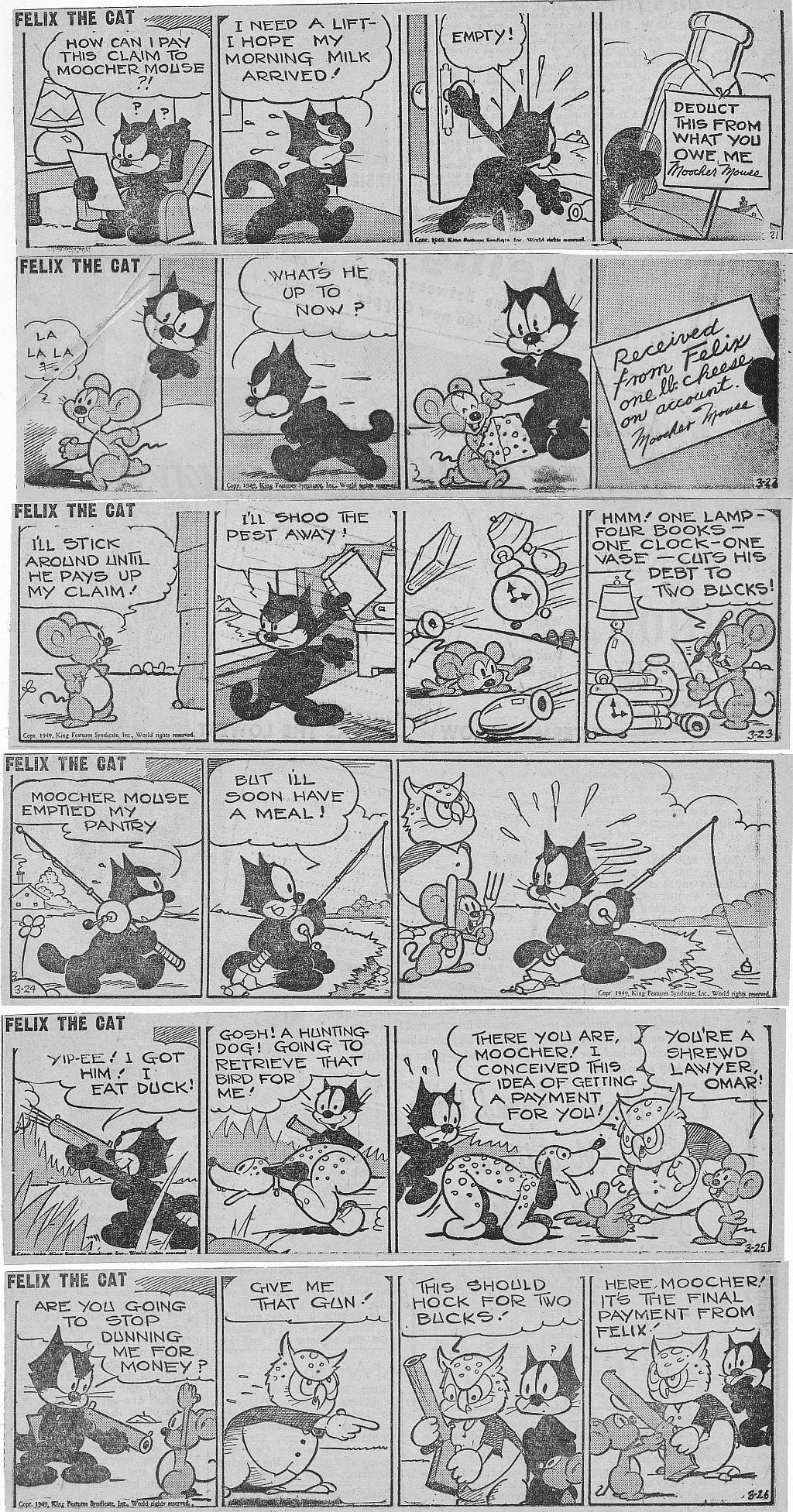 Â Felix, from 3-21 to 3-26-1949, continues Moocher Mouse’s dominion over Felix. In some of the strips from 1936, there were times when Felix was omitted from his strip for days at a time. By 1949, it seemed funny to have Felix continually frustrated by Moocher, and Omar the Owl, Moocher’s personal shyster. Moocher has the effect of reducing Felix’s importance to his strip. This is not unlike the Popeye cartoons produced in the late 1930s by Fleischer and into the 1940s by Famous Studios, in which Popeye became a patsy for his nephews, his Pappy and Wimpy, in effect being overshadowed in his own cartoons by the supporting cast. I guess that’s what happens when you’re a big cartoon star for too long, they run out of ideas for you. Look what happened to Mickey. 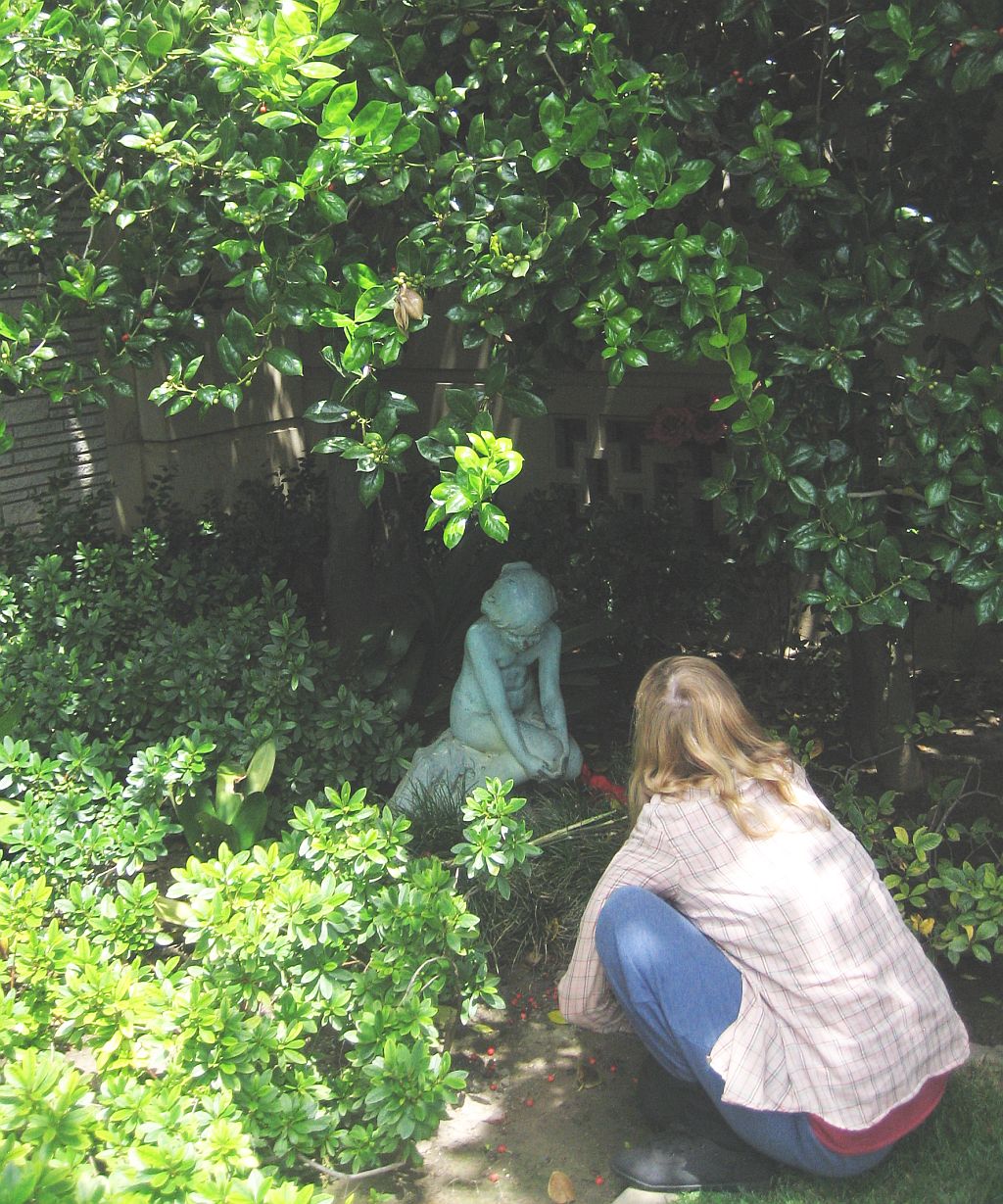 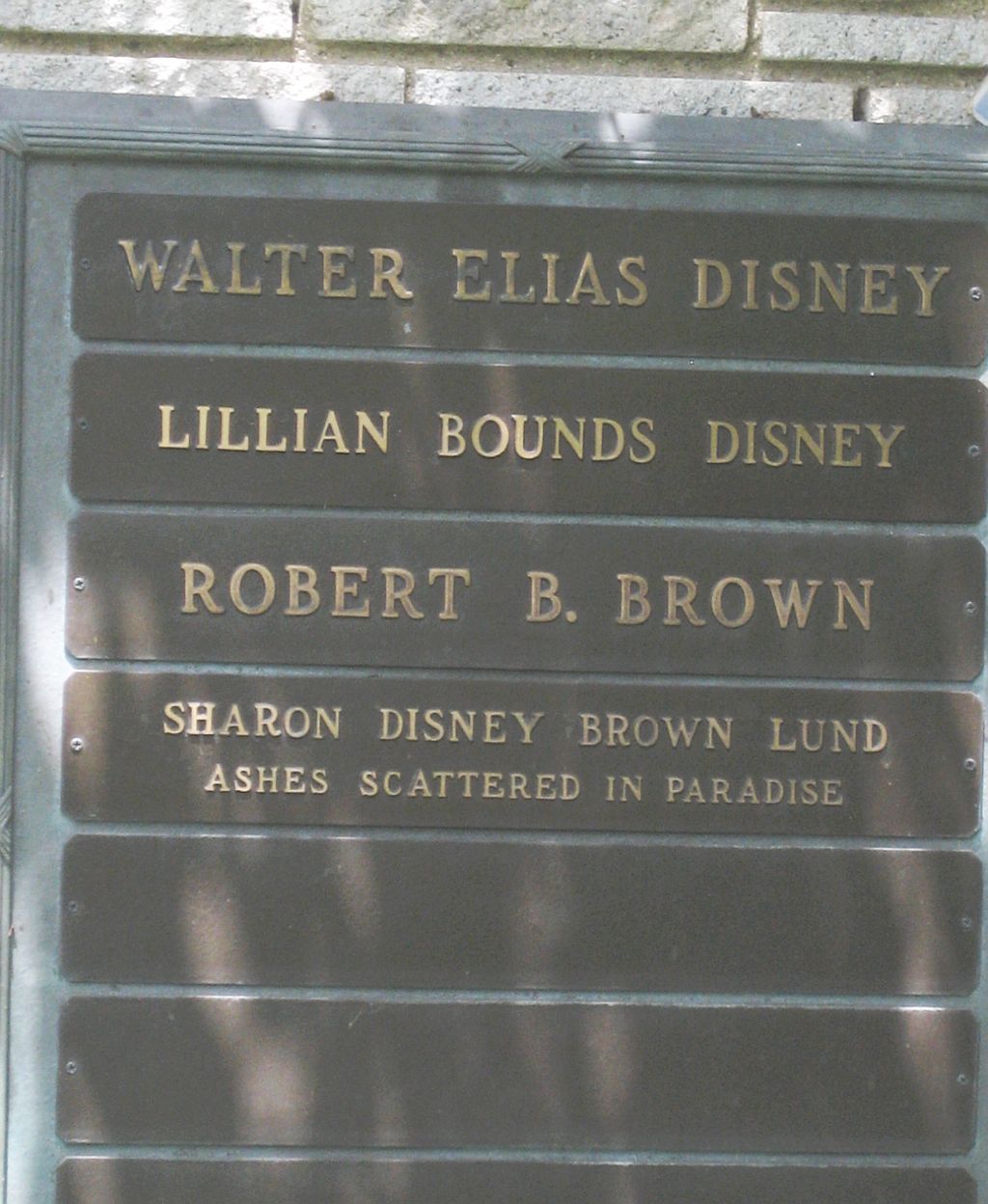 Â Speaking of Mickey, a few weeks ago, our Thursday painting group visited the Glendale Forest Lawn cemetery, where Walt Disney is buried in a little enclosed garden outside the Freedom Mausoleum. (That’s Cathy in the garden.) It’s interesting that in addition to Walt and Lillian being there, Sharon Disney’s first husband, Robert Brown is there, and Sharon’s ashes are mentioned as being “scattered in paradise”. That makes three names added to the family crypt since the last time I visited Walt’s last resting place. He’s still sadly missed by all us fans. 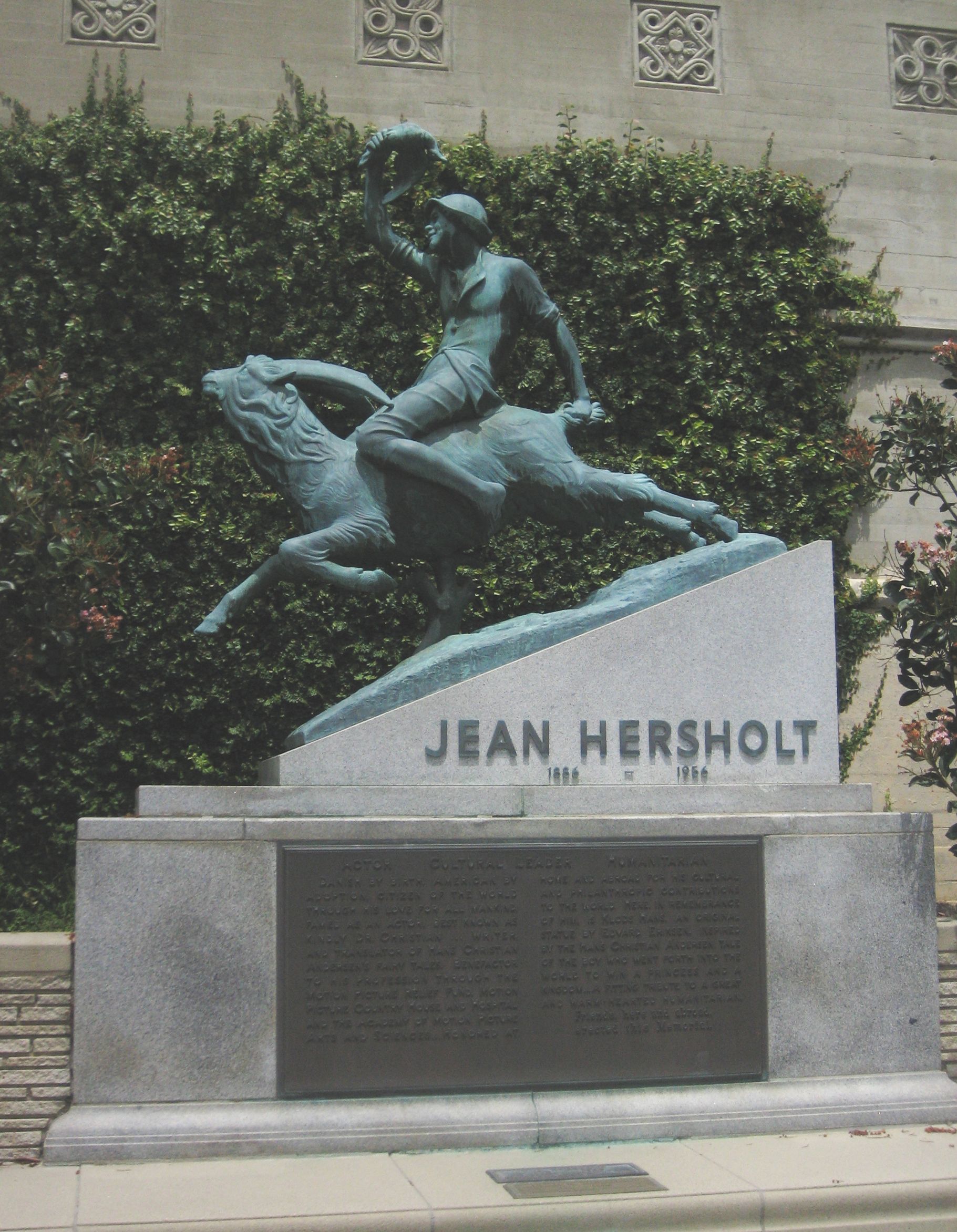 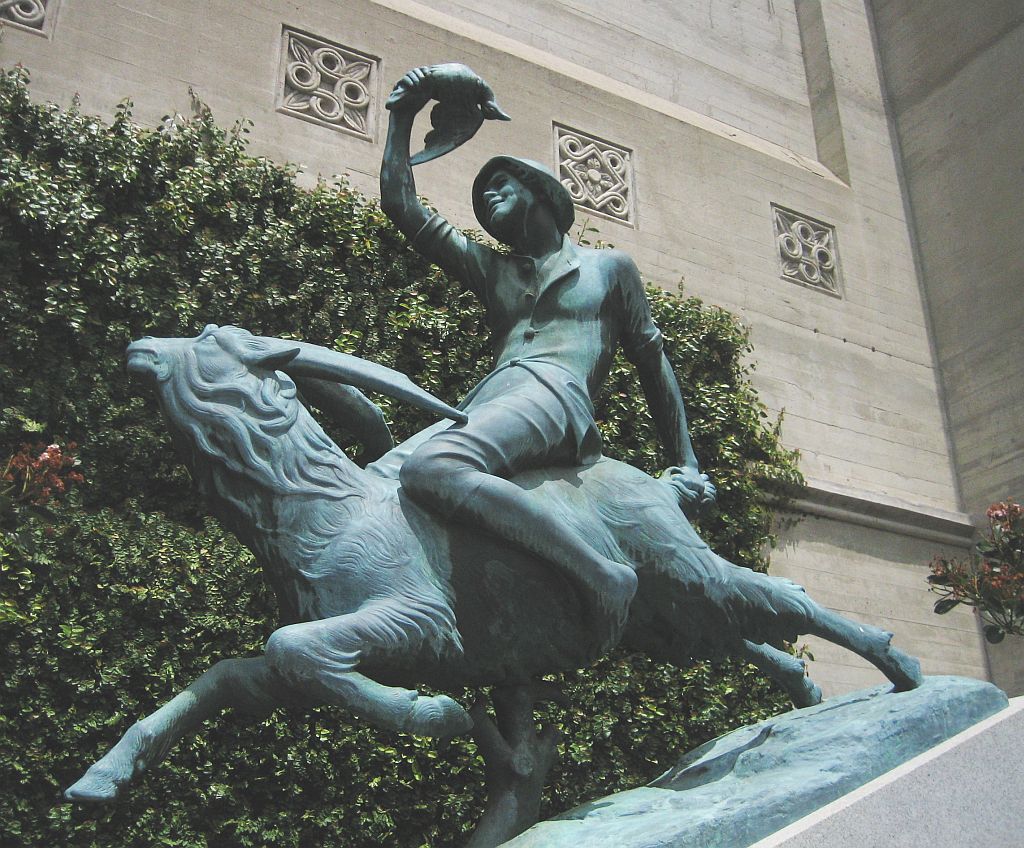 Â Here’s my favorite memorial in the whole Glendale Forest Lawn, Jean Hersholt’s marker. That’s the character “Clumsy Hans” riding the goat, a favorite Hans Christian Andersen story of Mr. Hersholt’s. A few members of our painting group were incredulous at the mention of Mr. Hersholt’s name (“Who’s Jean Hersholt?”) What a sad thing to be forgotten. Mr. Hersholt died in 1956, and since he was the founder of the Motion Picture and Television Relief Fund (still around today), the Academy of Motion Picture Arts and Sciences established the “Jean Hersholt Memorial Award” in 1956, rewarding outstanding philanthropy. Hersholt was famous for the character “Dr. Christian” (named after Hans Christian Andersen) which he performed on radio, the movies and into early television, and the Grandfather in Shirley Temple’s version of “Heidi”, as well as in “Grand Hotel” and many other fine performances. I think he was most proud of his work as a translator of Hans Christian Andersen’s stories from Danish into English. He did 160 of the tales, and they stood as the standard translations for many years. (Go read some Andersen, for heaven’s sake! My favorite story is “The Travelling Companion”, but there are many good ones.) I’m glad that the Academy still keeps the Jean Hersholt Memorial Award going, let’s never forget this wonderful actor and great humanitarian. 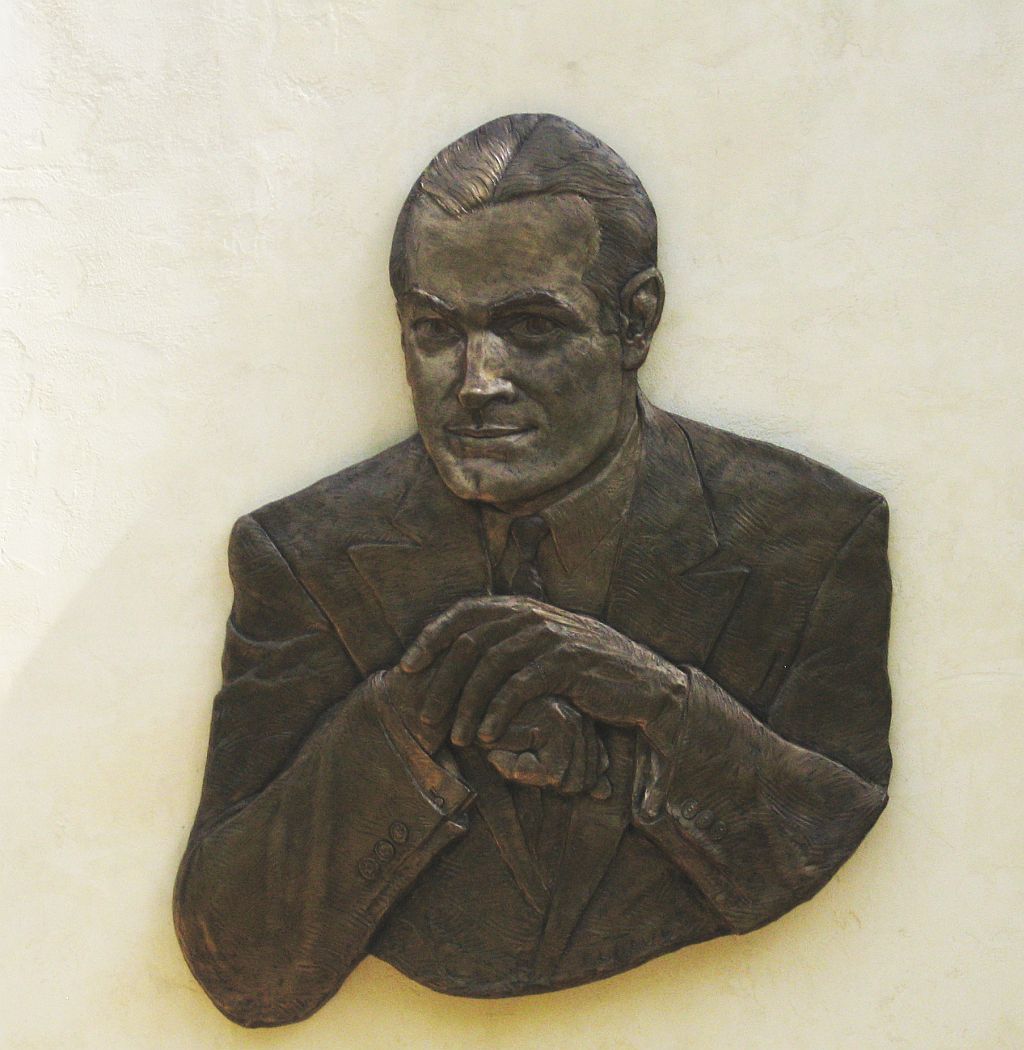 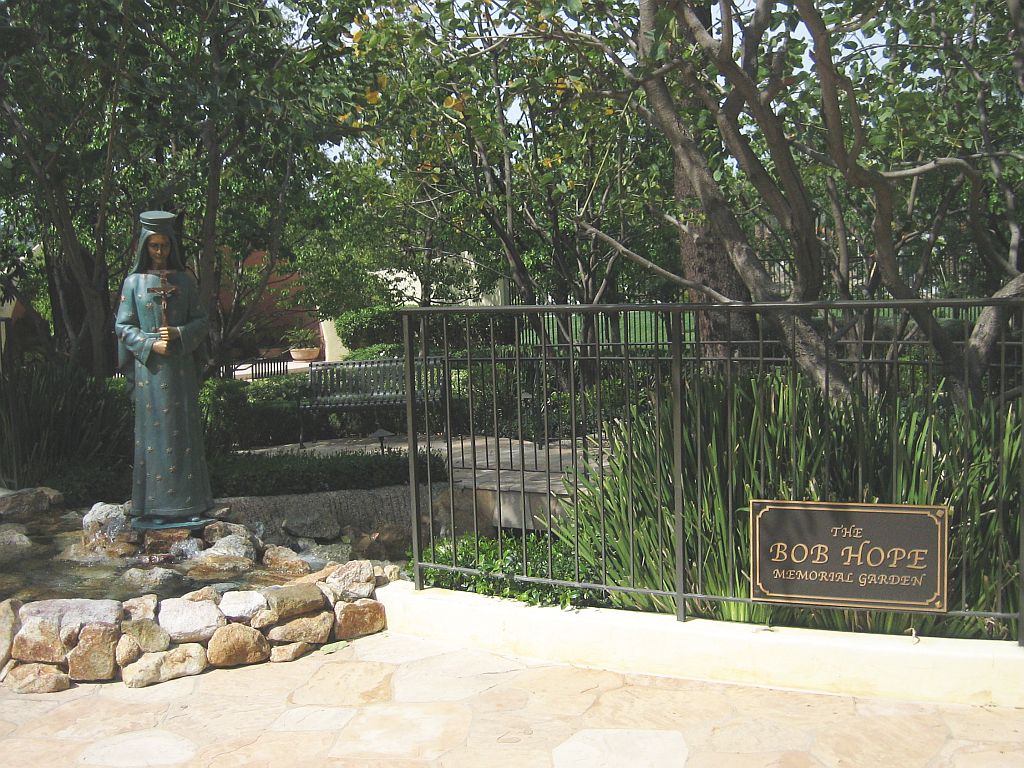 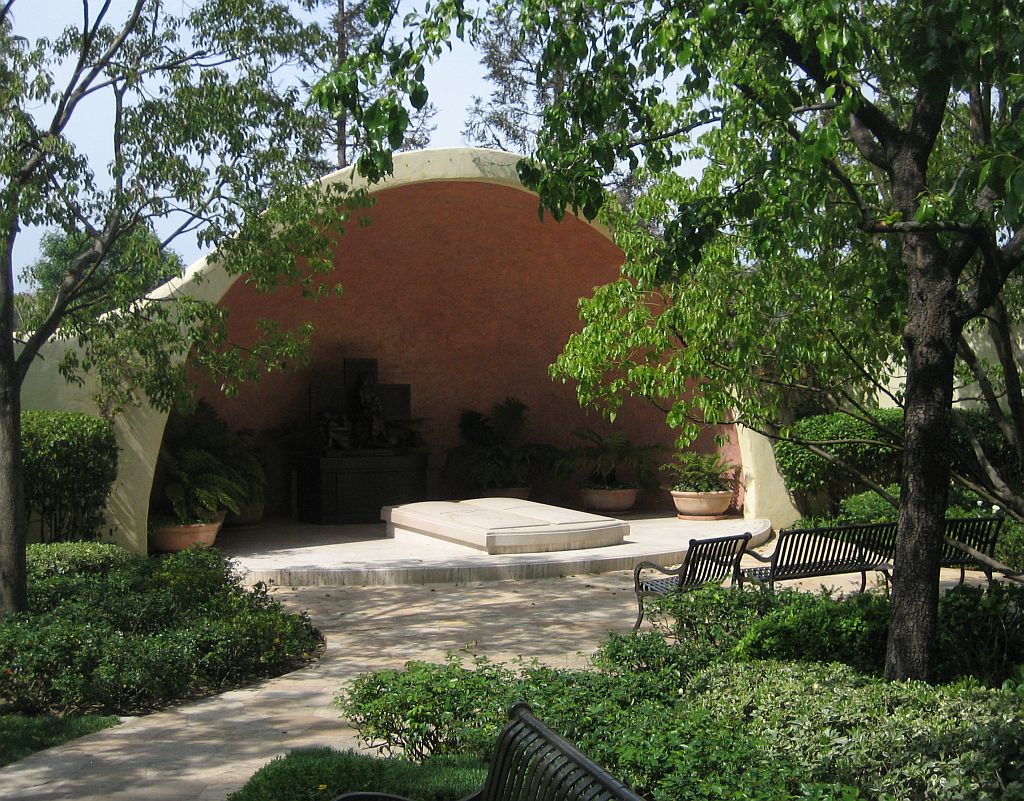 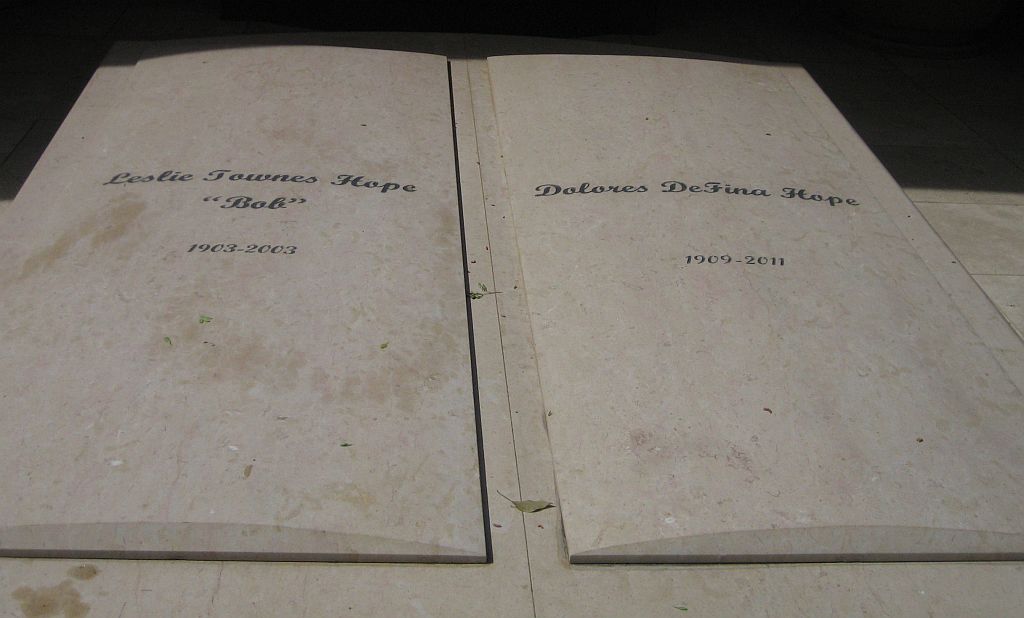 Â At the San Fernando Mission, another plein air painting destination, Cathy and I blundered into the Bob Hope Memorial Garden, not far from the main entrance to the Mission. It was guarded by a pretty stern Mission cop, who spoke harshly to us for “walking on the grass”. It’s a pretty garden, and on the inside, Bob and Dolores Hope’s graves are set up inside a structure that resembles the Hollywood Bowl! The brass wall decoration is the only actual image of Bob Hope in the garden. Bob passed on in 2003 at the age of 100, Dolores passed on in 2011 at the age of 102! Speaking of Jean Hersholt, Bob won the Humanitarian Award in 1960. Bob’s greatest comedy was in his radio show in the late 1930s and early 1940s, as well as the “Road” comedies and “The Paleface”, co-starring Jane Russell. I think that Jerry Colonna remains the funniest part of the Hope legacy, you can read about him on Wikipedia. If you hear any of the early 1940s Bob Hope radio shows, Mr. Colonna was the silliest member of the cast, with his “Who’s Yehudi?” and “Ah, Yes…” catch phrases. One of my earliest memories of funny voices was the Jerry Colonna Capitol children’s record: “Colonna’s Trolley”, which I heard in pre-school back in St. Louis. I only recently managed to snag a copy of the original 78 recording on Ebay. Billy Bletcher is in the cast as well. Jerry Colonna had a stroke in 1966 and was effectively in the Motion Picture Country Hospital until his death in 1986. Bob Hope visited Jerry there often, and it’s interesting that Jerry Colonna is also buried in the San Fernando Mission cemetery, not far from Bob Hope’s garden. Let’s not forget these fine comedians. 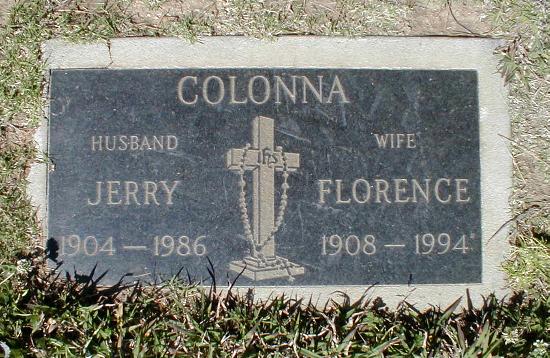