A visit from Tuxy! 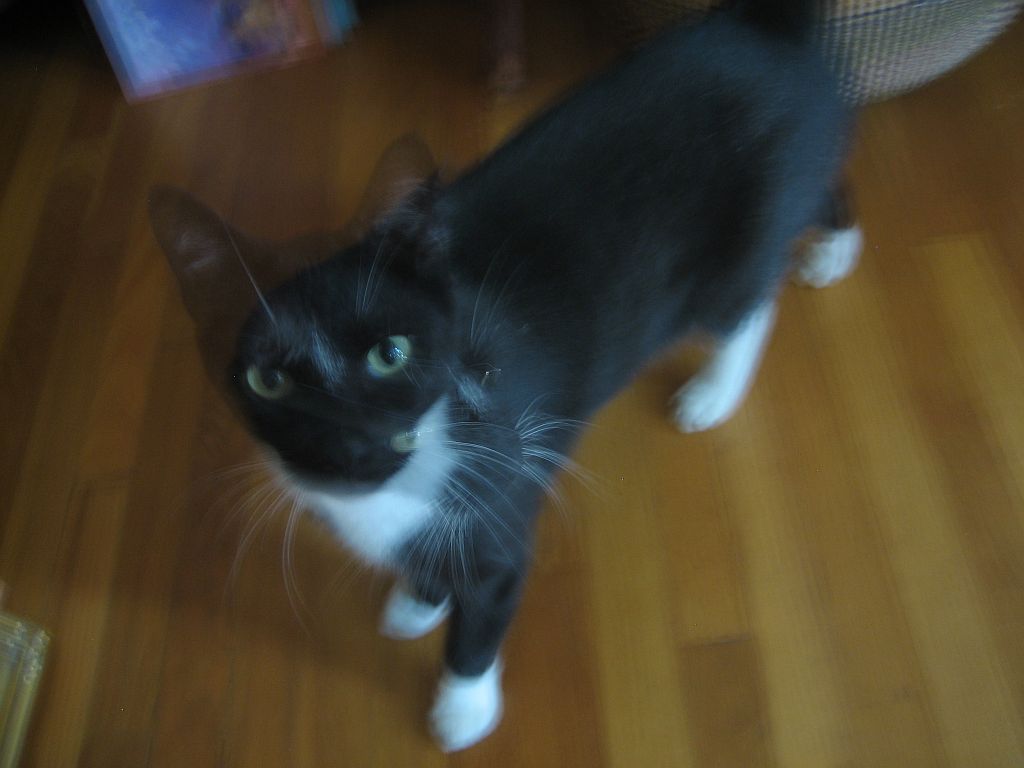 Â Here’s a photo of an infrequent, but very welcomed visitor to our vicinity, Tuxy the Cat! Tuxy’s owners call him “Jet”, and live about three blocks from here, downhill. I call him “Tuxy” because I made his acquaintance a long time before I discovered where his real home was, and I needed a name to call him by. Every once in awhile, a couple of times a year, their cat appears in our front or back yards and wants some attention. He loves to be petted and I give him some organic cat snacks. He likes to come inside for awhile and explore. The photo above was snapped during his most recentÂ sojourn around the living room. If you look closely, you’ll see a faint image of Tuxy’s head as it starts to turn to stage right, so I caught him in motion. He’s got such an appealing face, black and white markings and a rather short tail. I just love having him around. Sometimes he shows up at the back door at night and enters the computer room. He jumps up in my lap and stays for a few minutes while I type or read. After he becomes bored with our house he faces the door and I let him out so that he can re-join his folks. They take excellent care of him, his coat is always brushed and he’s well-fed, although not too fat. If he were my cat, I would not let him roam the neighborhood, too many coyotes and cars around here. When a long time goes by and I don’t see him, I’m fearful that he’s worn his Tux into cat heaven, but he always re-appears. Long live Tuxy! 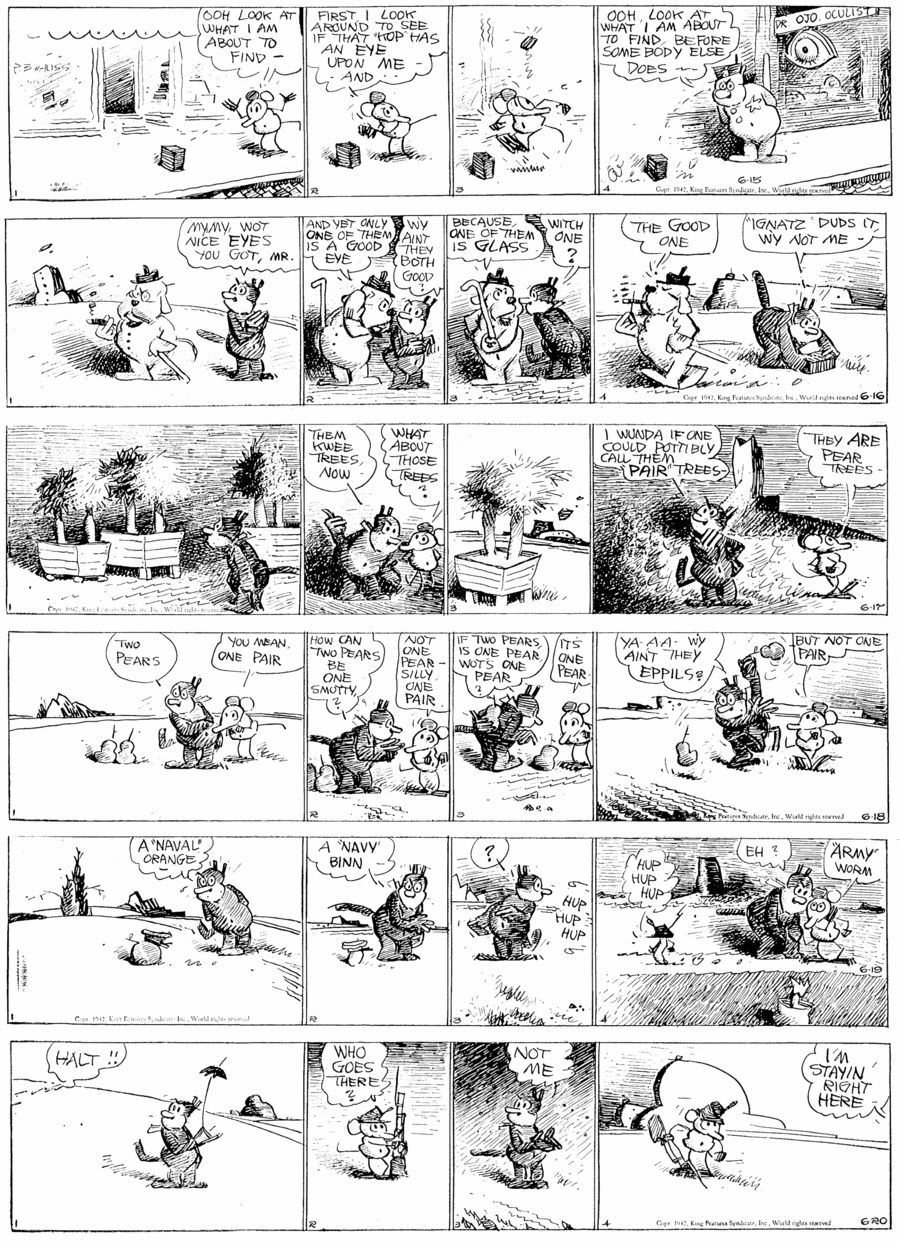 Â Here’s Krazy from 6-15 to 6-20-1942. The second World War was starting to show up in Coconino by this time. In the 6-19 and 6-20, an “Army” worm shows up after a “Naval” orange and a “Navy” bean, and Ignatz dons a Civil War cap and tries to interrogate Krazy, who remains obdurate. Krazy does not take the War very seriously in the strip, it’s just something to use for gags and props. I love the last panel in the 6-16, as Krazy picks up a brick to throw at a wise-cracking dog, “Ignatz duds it, wy not me–“.

Â Myrtle from 3-8 to to 3-13-1948 is full of Dudley Fisher’s unique turns in logic. My favorite strip features Hyacinth the cat scaring a very nervous Sampson out of his ice cream cone (the 3-9). Cats really do like to lick melted ice cream off a sidewalk or a dish. The 3-11 has Fisher’s comedy timing, as Freddie gives Sampson a lecture on economy and credit, then borrows a dollar from the boy. Fisher reveals Freddie’s taking ways in the last panel: “Your Pop borrowed it!”

Â Here’s Felix from 6-4 to 6-10-1934, continuing his time with the Yiminy family on their farm. The family continues to be suspicious of Felix as more eggs and milk disappear from the place. All this thievery is really the work of a crook who hides in Yiminy’s field disguised as a scarecrow. What a great way to hide out in plain sight! Felix continues his Arctic adventures as he cleverly eludes the sled dogs. What would Yukon King do in a case like this?

Â Here are the Yogi Bear Sundays from September, 1964, art by Harvey Eisenberg. These are of course, the third page versions. Yowp, at www.yowpyowp.blogspot.com, will no doubt be presenting the half-page versions of these comics at his blog in black and white. Keep checking over there to see the strips and his commentary. Yowp has one of the best cartoon blogs around, he even mentioned Carmen “Max” Maxwell in his latest post, so put him in your favorites. I like the 9-13 (click to enlarge), which has a rare view of Yogi without his pork pie hat, and a very stylized leprechaun, and the 9-27, which has a really old vaudeville punch line, probably used by the Marx Bros. in their skit “Fun in Hi Skule” back in the 1910s.

Too bad nobody filled me in on where Ducky Nash was in the photo I ran last post. Thad, one of my three readers, seems to think it might be an RKO Radio function feting an actress, but it’s only a guess. RKO Radio Pictures, of course, was Walt Disney’s distributor in the 1940s and early 1950s. 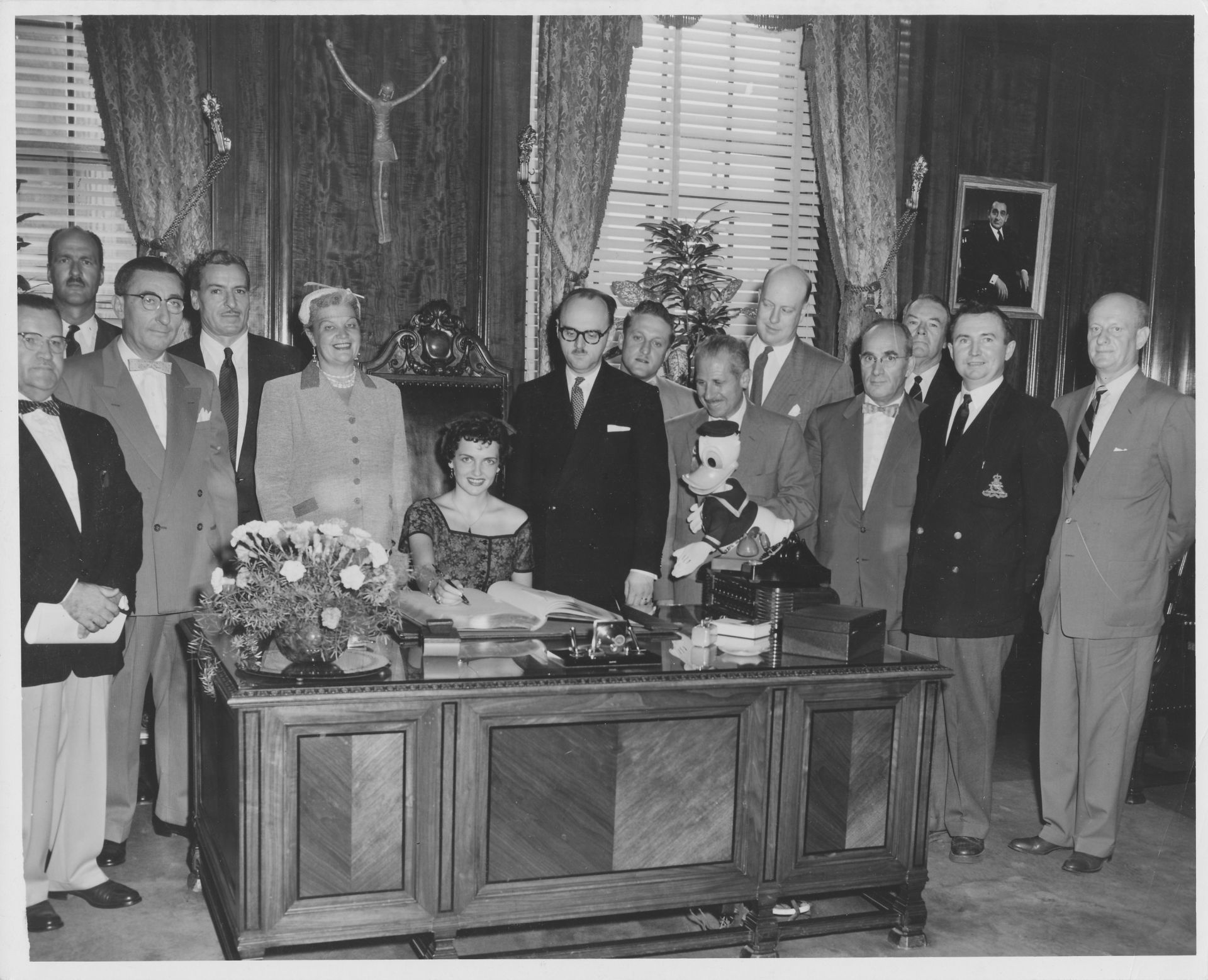 In imitation of Mike Barrier’s infrequent series over at his blog: www.michaelbarrier.com; he calls “Where Was Walt?”, I’m starting a one-part series called “Where Was Ducky?” This is a mystery photo with which my brother gifted me, that shows Clarence “Ducky” Nash with his Donald Duck ventriloquist dummy (Ducky was NOT a ventriloquist), at what is evidently a signing ceremony for the lady sitting at the desk. Was she an actress? My brother thinks she might be Jane Russell, but she doesn’t look like Miss Russell to me. Who are the rather grim faced bunch of gentlemen in the picture with the actress (?) and Ducky? Why is there a crucifixion wall hanging behind them, and who is the man in the framed portrait on the right side of the photograph? I think it must date to the 1949 to 1955 period, because that’s the later edition of the Duck Dummy.Â  If any of my readers can tell me anything about this photo, you’ll get a free subscription to this blog! (Oh, you say you already get that? We’ll give you the Stan Lee no-prize instead.) 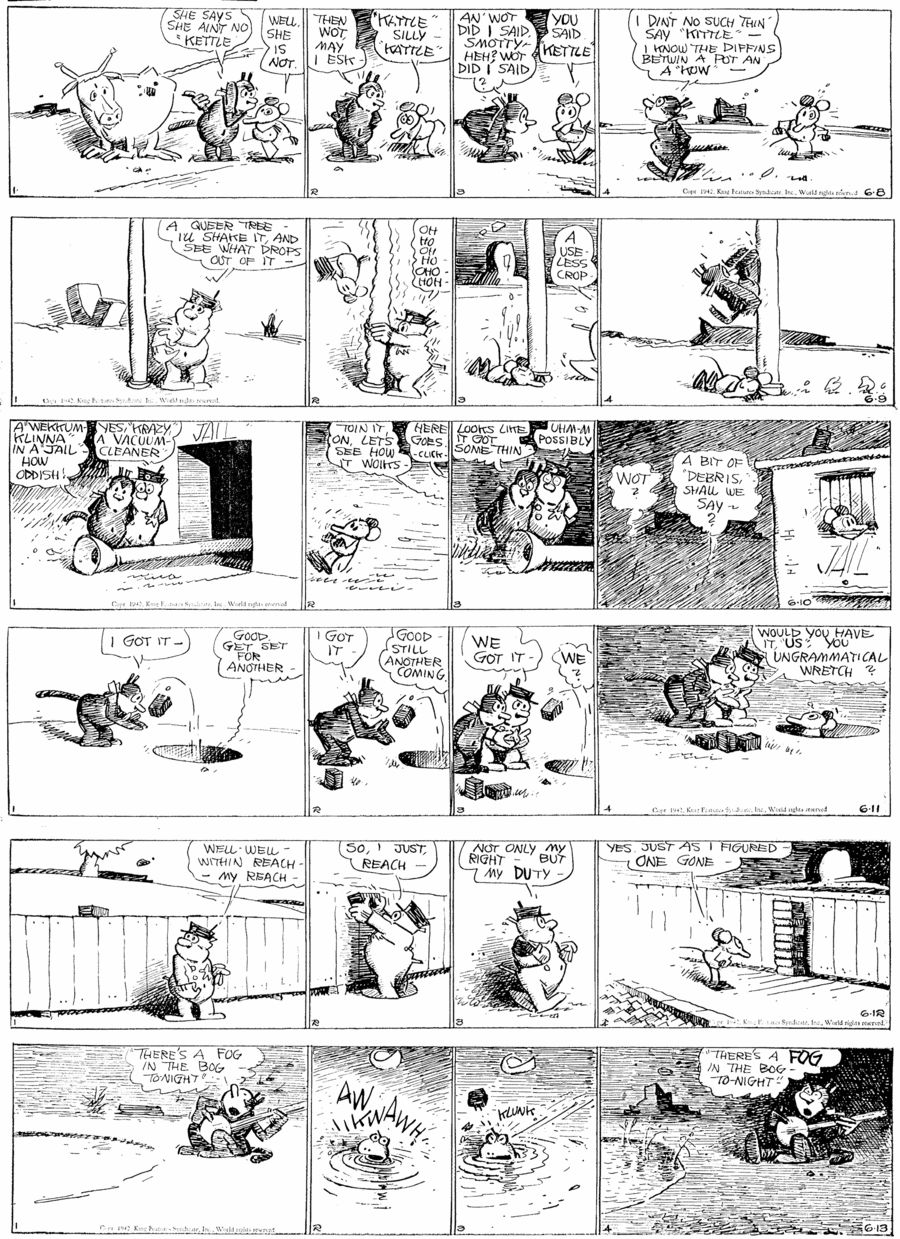 Myrtle is from 3-1 to 3-6-1948 this time. This being the Catblog, I will point out one of Hyacinth the cat’s rare appearances in the 3-3. In a typical Cat behavior, Hyacinth cozies up to Myrtle to get in on fresh milk. The 3-5 is very funny, as Myrtle’s Mom tries to lure errant husband Freddie back home from bowling with a lemon cream pie she hasn’t even made yet!

I predicted last time that Yimmy Yiminy would be Felix’s protector since the Yiminy family adopted him in the last batch of Felix the Cat dailies. In the strips from 5-28 to 6-2-1934, Otto’s proclivity for getting Felix in to tight jams continues and Felix is accused of stealing ducks and milk from the Minnesota farm. Here’s another prediction, Yimmy will find a way to clear Felix’s name very soon. In the Sunday, from 6-3-1934, Felix continues to be lost in the Antarctic blizzard and Danny Dooit and his kid brother want to save him with snow shovels.

I’ll be posting some new cat photos next time to cheer you, until then this is your faithful Catblogger, purrr-suing the mews!