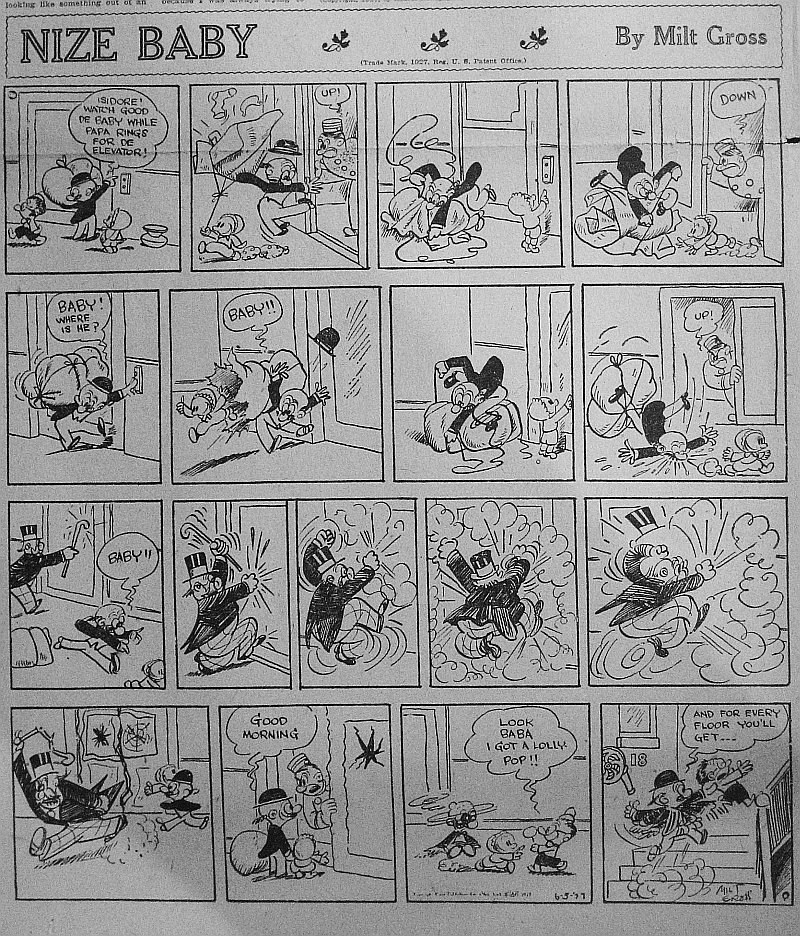 Hi Readers! Here’s Milt Gross’s Nize Baby from 6/5/1927.Â  Can’t you just FEEL the movement and the animation in Milt’s drawings? Papa wrapping the laundry with the baby inside, and the top hatted guy banging on the elevator door animate as you scan over the panels. Papa hitting IsidoreÂ on every floor of the hotel for buying a lollipop might seem like extreme corporal punishment in this day and age of “time-outs” for kids. That’s the “roaring twenties”!

In Krazy Kat, 10/16/1939 to 10/21, Ignatz tries celebrating his and Krazy’s birthday by tossing bricks, but Offisa Pupp celebrates his natal day by jailing Ignatz. I love the last panel in 10/18, a little tableaux as Pupp and Krazy set up a birthday cake outside the jail as Ignatz looks out. The balance of the week involves Garge’s love of puns, “peace” pipe /”piece” pipe, with Offisa Pupp getting away with it because he is the law, much to Ignatz’s disgust.

Marvelous Mike this week, from 5/27/1957 to 5/29 (5/30 missing) then 5/31 and 6/1, concludes the foundling home story with the crooks entrapped by Mike’s scheme. Mike generously gives little Billy, the runaway orphan, all the credit for the bust. Mike returns home from the “home”, then tries to coach Cliff Crump on the fine points of his golf game. Now Cliff ought to know better than to resist Mike’s kibitzing by this time!

Â Here’s the “conclusion” of the Felix story we began last time, from 12/11/1939. The spook runs off into the woods as Felix and the “gnomes” look on. I had a bit of positive reaction to Felix, so I’m “grooming” some 1936 strips to run here very soon. Watch for them! Remember to click on the small strips to view them at full size. 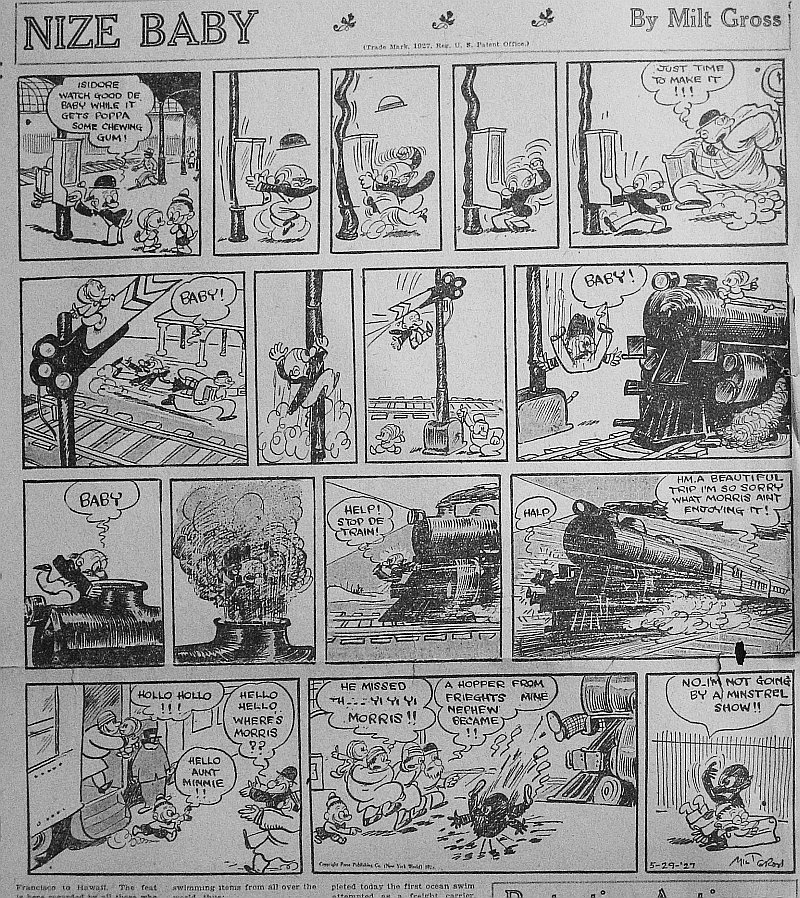 Here’s NIZE BABY from 5/29/1927.Â  In this episode Mr. Feitlebaum has a first name, Morris. Isidore gets a Katzenjammer punishment and Milt Gross leaves us with a blackface joke. This strip should definitely appeal to the rail fans out there, I love steam and diesel engines too.

Krazy this week is from 10/9/1939 to 10/14. A lot of Toot’n and Clang’n this week as Offissa Pupp devises a horn alarm to warn him of “sin” in progress. Ignatz winds up in jail for sending out a false Toot, but Krazy ends the week with a happy Glong Ka lang.

Marvelous Mike is from 5/20/1957 to 5/25 this time. The Black Market Babies storyline thickens as Mr. Smith, the gangster behind the Meadows foundling home, takes the stage. It’s interesting that Smith’s assistant originally suggests getting $1000.00 for Mike out of Cliff Crump, but in the 5/24 strip, Smith drops the price to $500.00 cash. Of course, Mike’s hep to the whole racket.

As a bonus, here’s a week of the Felix the Cat daily strip by Otto Messmer from 12/4/1939 to 12/9. It’s a spooky story line in which Felix gets rid of a pesky ghost by getting him so drunk that he is chased out of the castle by the goblin D.T.s! “Messmer-izing” art by the incomparable Otto. If you like this strip, maybe it will continue, it’s up to you. If there is no reaction, then no more Felix. This is the Catblog, after all. Have a great time in San Diego this coming weekend.Â  I won’t be there, but even if I was there, I wouldn’t see anyone I know in that Peripatetic mob! 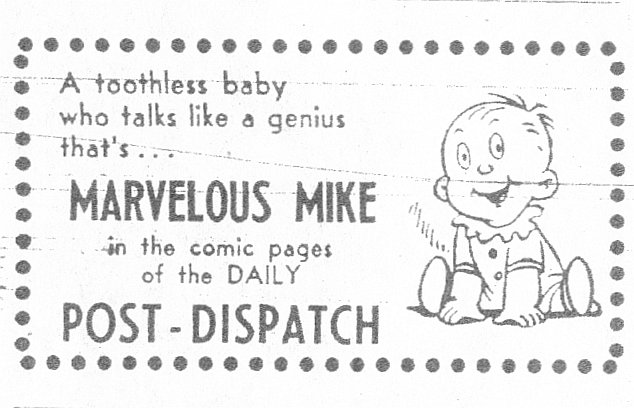 Â Â Â Â Â  Not much going on this week. We saw the newly refurbished Griffith Park Observatory on Thursday with our painting group. Cathy and I did a painting apiece of the newly rebuilt L.A. landmark while being regaled by a travelling musician, who composed his own songs about people’s bathroom habits (what else?). You owe it to yourself to see all the new things that have been added to the underground, downstairs portion of the Observatory, big solar system models, comparative size models of the planets (Pluto is still included), a new Leonard Nimoy theatre, Wolfgang Puck’s Cafe at the End of the Universe and a new gift shop! It took almost four years to rebuild, but it was worth it. Admission is still free, but it costs adults seven bucks to see a Planetarium show. 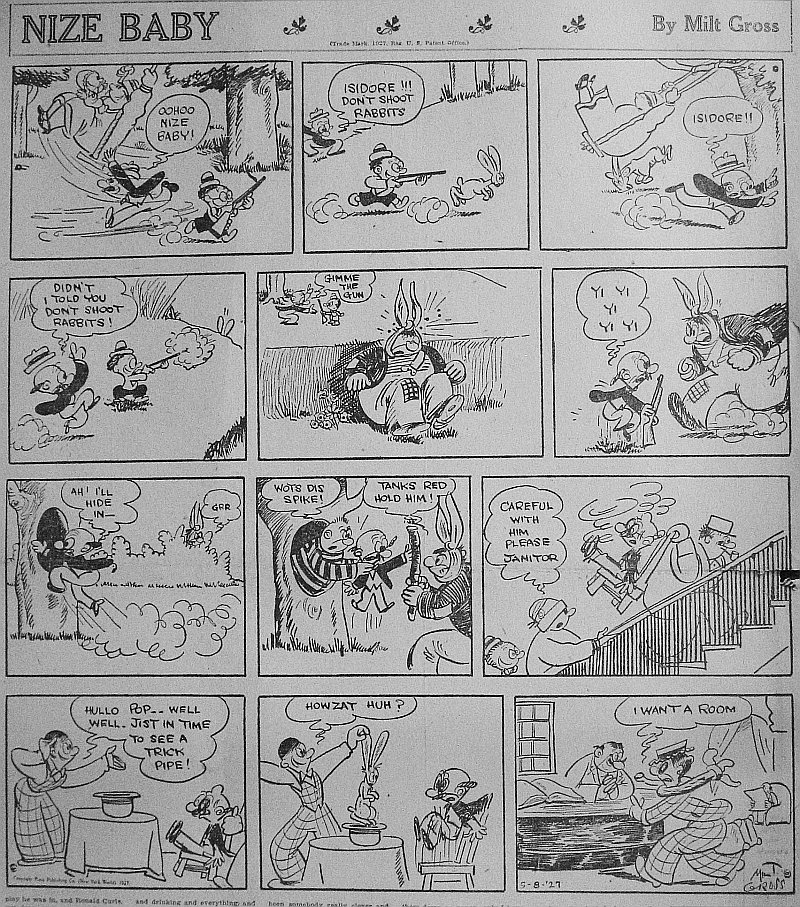 Poor Papa Feitelbaum definitely has a rabbit problem in this strip.Â  I love the third panel with Mama getting speared by a goat!

Ignatz can’t appease Offissa Pupp with apples no matter how hard he tries. Mrs. Kwakk-wakk’s no help either.

Mike uses the IRS and the FBI to put himself in the infamous Mr. Meadows’s foundling home. It looks like the baby-sellers are already on the move! I like how attached Cliff Crump has become to baby Mike. In the 5/12 strip, he declares that he “can’tÂ stand beingÂ without him (Mike)..” Cliff’s attitude is slowly changing from being jealous and suspicious of Mike’s intelligence, to becoming dependent on it, and loving the baby more. I made a numbering error in my San Clemente and Comics post last time, the Marvelous Mike strips were actually from May SIXTH through May ELEVENTH, not the Fifth through the Tenth, 1957. It’s sometimes a little hard to read the dates on the strips themselves, so bear with me. As always, thanks to my brother Kurt in St. Louis, the most dangerous city in the U.S.! Kurt braved the hostile atmosphere of the downtown St. Louis public library to print out the microfilm copies of Marvelous Mike that you are reading here. This is a really rare strip, which I hope you are getting a kick out of reading. The promotional ad at the top of the post this week was from April 3rd of 1957. Newspapers still cared about the comic strips in the 1950s. And today….the Los Angeles Times just reduced the Sunday comics from 8 pages to 6, dropping two strips but cramming the remaining strips into such a cramped looking layout that only the faithful will still bother to read. Remember to click on any strip here to see it at readable size. 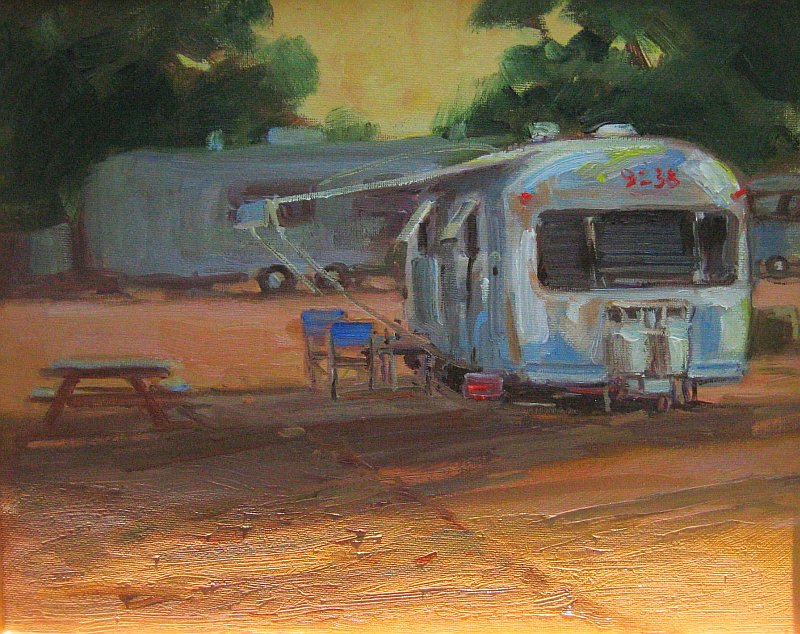 Cathy and I spent last weekend (June 26th and 27th) painting in the beach town of San Clemente at the annual San Clemente Plein Air festival. We painted from a model named Peter at the “Quick Draw”, at Ole Hanson’s (the founder of San Clemente) home: the Casa Romantica, and at the San Clemente State Park Campground, where Cathy did this oil study of an airstream trailer. She loves the streamlined classic look of these old trailers. Click on the image to enlarge it and study how she created her twilight lighting effects up close. 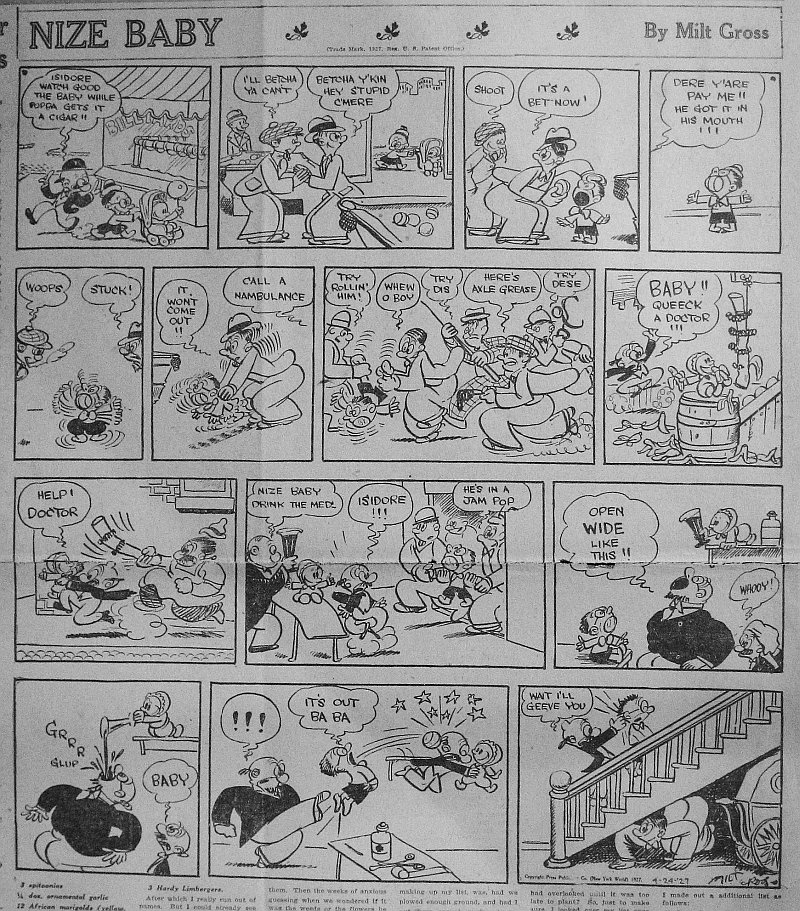 It looks like Looie Dot Dope is at fault for stuffing Isidore’s mouth with that pool ball. I love the panel with the Italian grocer chasing and hitting Papa with a banana stalk. The last panel with Looie hiding under the stairs ties the story up well. This strip was really brittle, I had to piece it together to take the picture. I used to tape newspapers together when I was a kid, now I never get any adhesive anywhere NEAR old newspapers. The tape just winds up staining whatever it touches. Much better to just piece them together, then photo or scan. If I knew Photoshop, I could make the joins in that program, but it’s too expensive for me.

Krazy this week is from 9/25 to 9/30/1939. Garge does a whole week’s worth of gags featuring a half-a-brick. We get to meet a mouse pal of Ignatz’s: “Skweeky” (9/28)! I think this is one of Herriman’s more inspired strings of gags. He might have been tempted to do just half-a-strip for one of the dailies, but maybe his editor wouldn’t have understood.

In Marvelous Mike this week (5/5 to 5/10/1957) Cliff puts Billy the orphan in the foundling home. (By the way,Â did you notice that in the first panel of theÂ May fifth strip, Kuwahara drew the wrong arrow on the speech balloon, Mike isn’t talking, Billy is! Another clue is that the balloon isn’t lettered in Mike’s special font.) Mike feels like a fink for “ratting” on Billy, so he turns Cliff in to the IRS!Â  Talk about being a fink! We’ll see how this strange move fits Mike’s plans next time. Enjoy the strips over the Fourth of July weekend!

THIS JUST IN: Cathy and I were in San Clemente over June 26 and 27th, so we missed an historic Estate Sale in Van Nuys. It was the estate of Manuel Gonzales, the great Disney comic strip artist who drew the Mickey Mouse Sunday page for many years. His wife is moving into a care facility, so she sold the house and all the contents. There were many King Features Syndicate proof sheets on Mickey Sunday pages, Courvoisier cels from Snow White, many old art books, antiques, all sorts of things. If you go to www.AversaEstateSales.Com right away, you will find pictures of the three Snow White cels, all Dwarf images. They are still up for grabs. I met Manuel, or Manny as they used to call him, many years ago when I visited the ramshackle building that held the Disney comic strip department on the lot in Burbank. I also met Floyd Gottfredson that day, I was absolutely in awe of him. Meeting Floyd for me was better than meeting Clark Gable, or Ronald Colman! He was such a modest man, who drew his Mickey dailies with a crippled hand. Imagine that beautifulÂ ink line coming from a hand that was too crippled to be good for anything but holding the pen! Manny told me that Floyd was the grand old man of the department, and much admired by all. Manny and his wife lived at 15215 Marlin Place in Van Nuys, should any of you want to make a pilgrimage to the shrine!