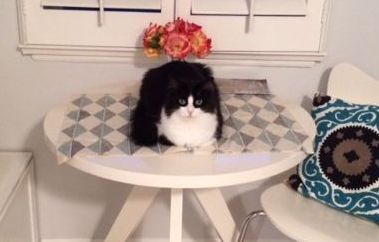 Scout welcomes you to sit down at her table and read another blog post with more of your favorite comics! 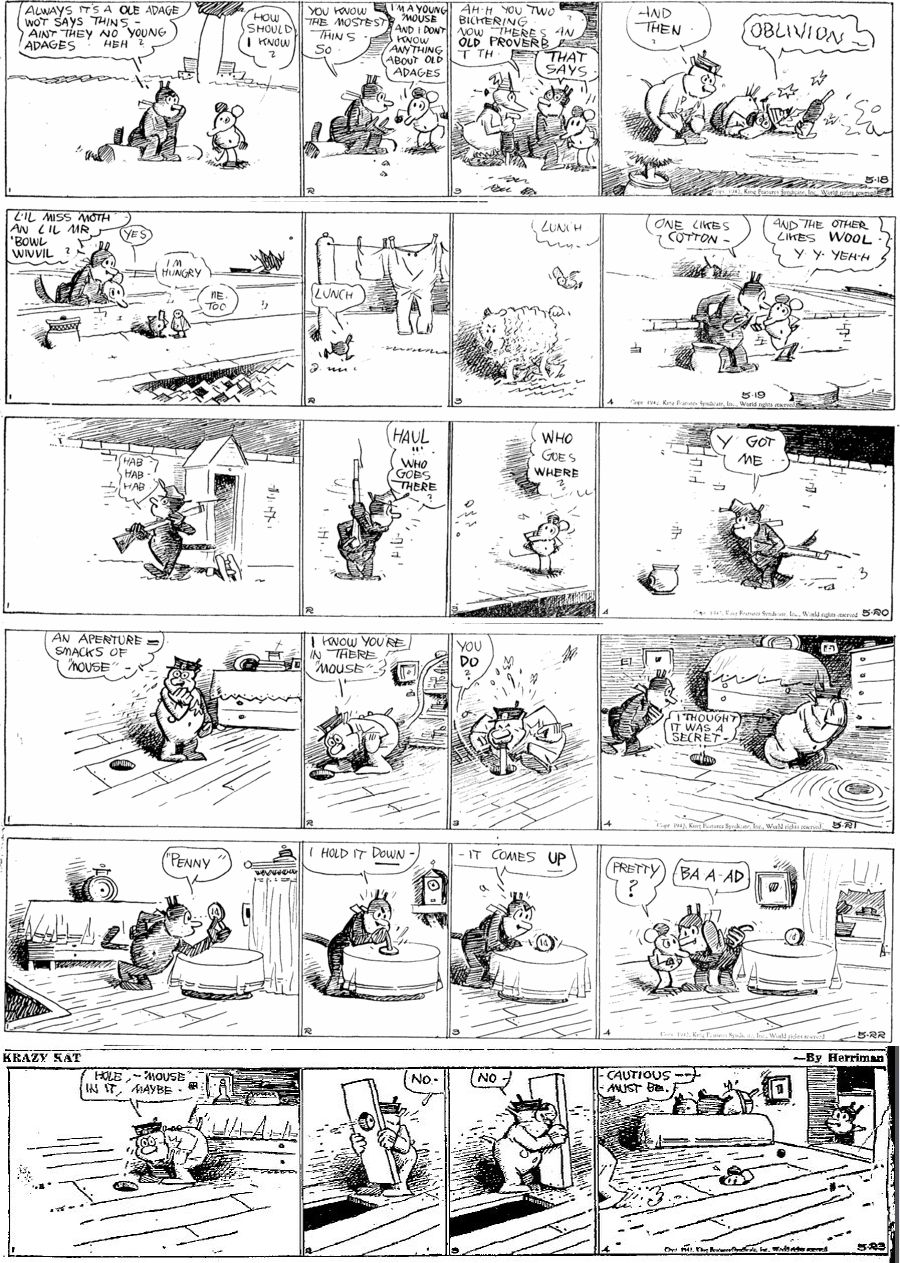 Here’s Krazy from 5-18 to 5-23-1942. It’s mousecellaneous gags this week, some featuring Ignatz and some Offissa Pupp. In the 5-21 and 5-23, Herriman uses his Coconino Stage idea for knothole gags in the floor. Can anyone tell me what Ignatz is poking Offissa Pupp in the face with in the 5-21? I guess it could be a billy club, but Ignatz usually uses bricks! The 5-23 Saturday strip was culled from the San Antonio Light of that date. It’s interesting that the King Features Syndicate archive has so many holes in it, and that the strips they use on their Comics Kingdom website rarely go back earlier than 1936. It’s also interesting that some times they claim not to have a strip in the archive, say an old Barney Google, only to find that the reason they claim they don’t have a particular strip, is because it contains an appearance by a comical black porter, or has an ethnic gag in it that they don’t feel comfortable in reprinting. Here’s another example of a big business, in this case the Hearst Corporation, making profit from comic strips and characters that in many cases are 80 to 100 years old, and yet not held responsible for maintaining a complete archive of their features and strips! I suppose that means that KFS relies on collectors and library sources and collections of old newspapers for the truly vintage material. It seems strange to me that they could be reprinting the early Segar material, like “The Five-Fifteen” or Thimble Theatre before Popeye, but because they don’t have that material, they resort to recent strips like “Quincy” or “Boner’s Ark” and try to convince us that they are old classics. I am a devoted reader of Comics Kingdom, but as an archive, it’s pretty chewed up. 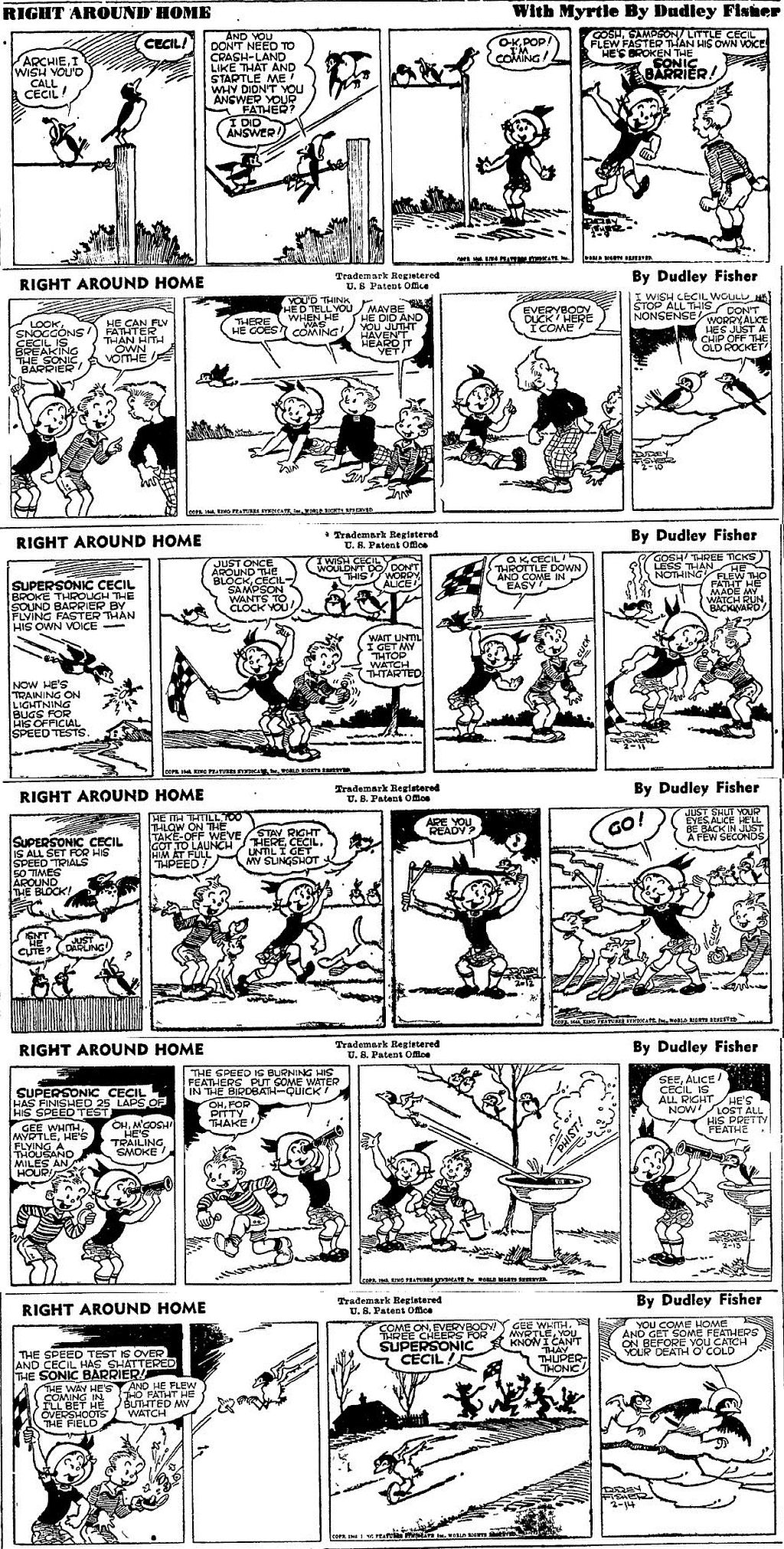 Here’s Myrtle, 2-9 to 2-14-1948. This week, it’s pure fantasy as Dudley Fisher presents Supersonic Cecil, the baby bird that breaks the sound barrier! Alice and Archie, the two sparrows who are running characters in “Right Around Home”, hatch out their offspring, Cecil, who demonstrates remarkable flying ability for a youngster. Cecil flies so fast that he breaks Sampson’s watch a couple of times. In the 2-14, Cecil comes in for a landing and uses a wheel from Sampson’s broken watch as landing gear.Â

Felix, from 5-7 to 5-13-1934, again eludes some crazy looking Messmer bulldogs, by providing them with a giant dinosaur femur to eat. The dogs are rounded up by the pound, but Felix steals a key from the dogcatcher and frees them all, saving them from the gas chamber. In the Sunday, Felix continues his adventures with the two aviators in Antarctica and makes a soft mattress for himself out of walrus whiskers.

Yogi Bear Sundays are from July, 1964, clipped from the St. Louis Post Dispatch back then. Yogi continues his Hollywood adventures in support of his debut feature film: “Hey There It’s Yogi Bear”. In the 7-5, we see a caricature of Zsa-Zsa Gabor, (real name: Gabor Sari, Miss Hungary of 1936) who evidently was a close neighbor of Joe Barbera in the Studio City neighborhood where he lived. The cartooning by Harvey Eisenberg is quite strong in the 7-26. I love Yogi’s disdainful attitude in the fifth panel, and Mr. Casholder’s attitudes in panels 4 and 7 are delightfully over the top. Layouts this strong would have been welcome in the Yogi Bear TV cartoons of the period, but often the background drawings were better than the character attitudes in those episodes.Â 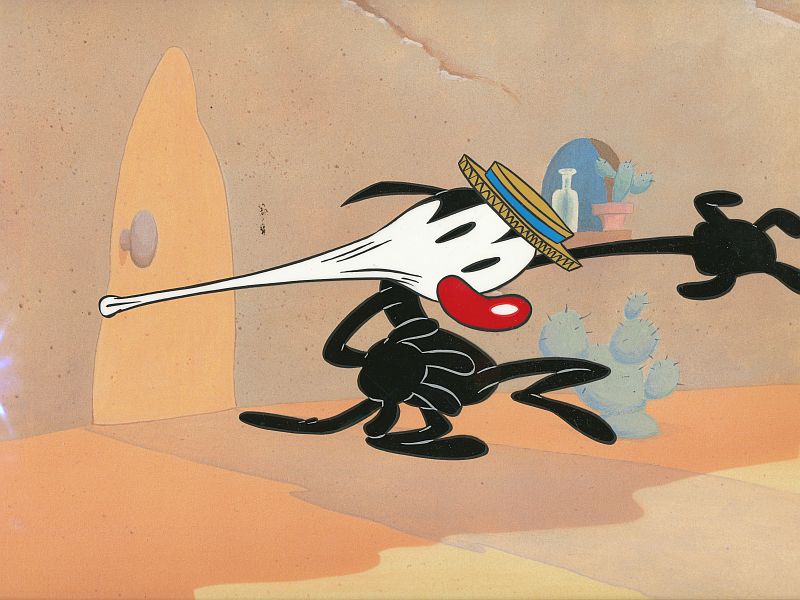 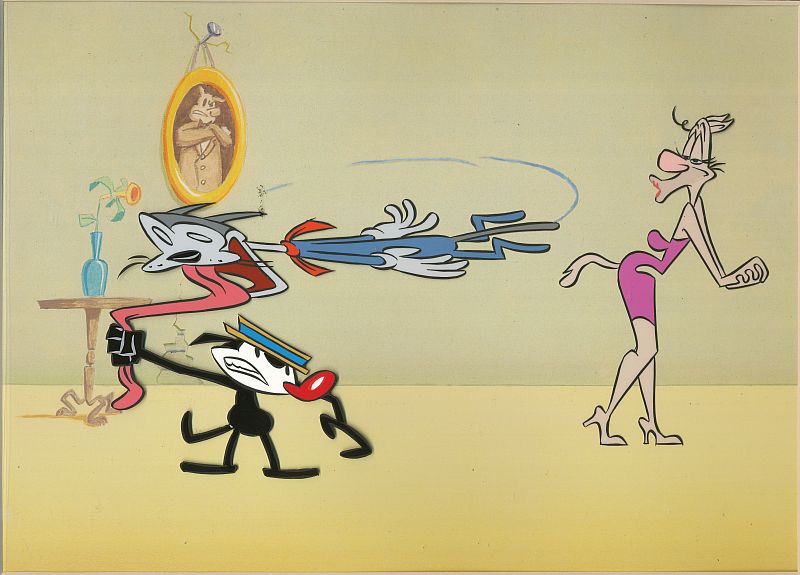 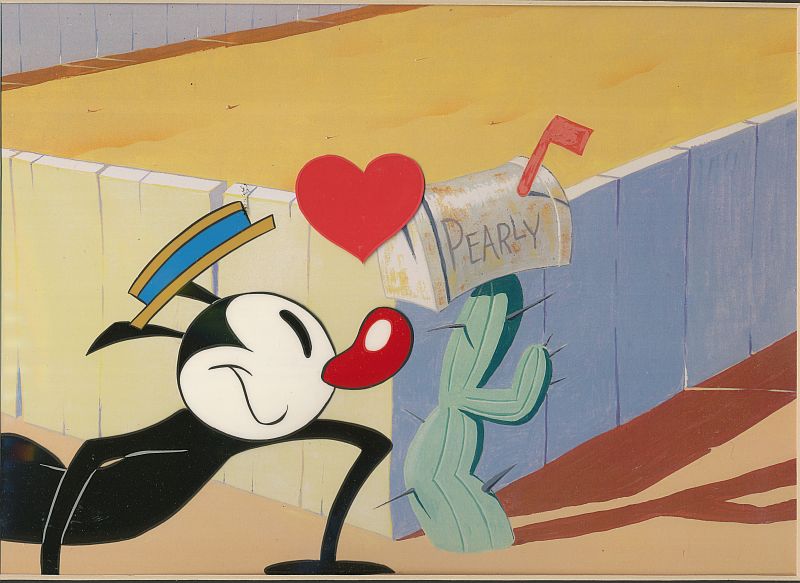 Â In response to at least two requests, we’re making six cel set-ups available from our 2013 production, “Some Other Cat”. These are some of the last of their kind, original, hand inked and hand painted cels created by some of the best in the business, notably our “Igor”, whoÂ inked nearly every cel with Itza Cat in it, and that’s quite a few. Just click on the thumbnails above to see them full-screen. The backgrounds are photo-reproduced, and each set-up comes with a DVDr of “Some Other Cat”. Three of the set-ups come with the original animation drawings mounted on the back: the silhouettes on the shade, Pearly’s hand about to grab Itza and Itza with the big heart over his head at Pearly’s mailbox. These one-of-a-kind art pieces are $100.00 apiece, or $80.00 apiece if you’re taking two or more. They make great gifts, and you’ll be helping to support a rare independent animated short that actually employed traditional ink and paint artists! If you’d like to take one of these cats home with you, just leave a comment below, or write to kausler@att.net, and we’ll make all the arrangements. 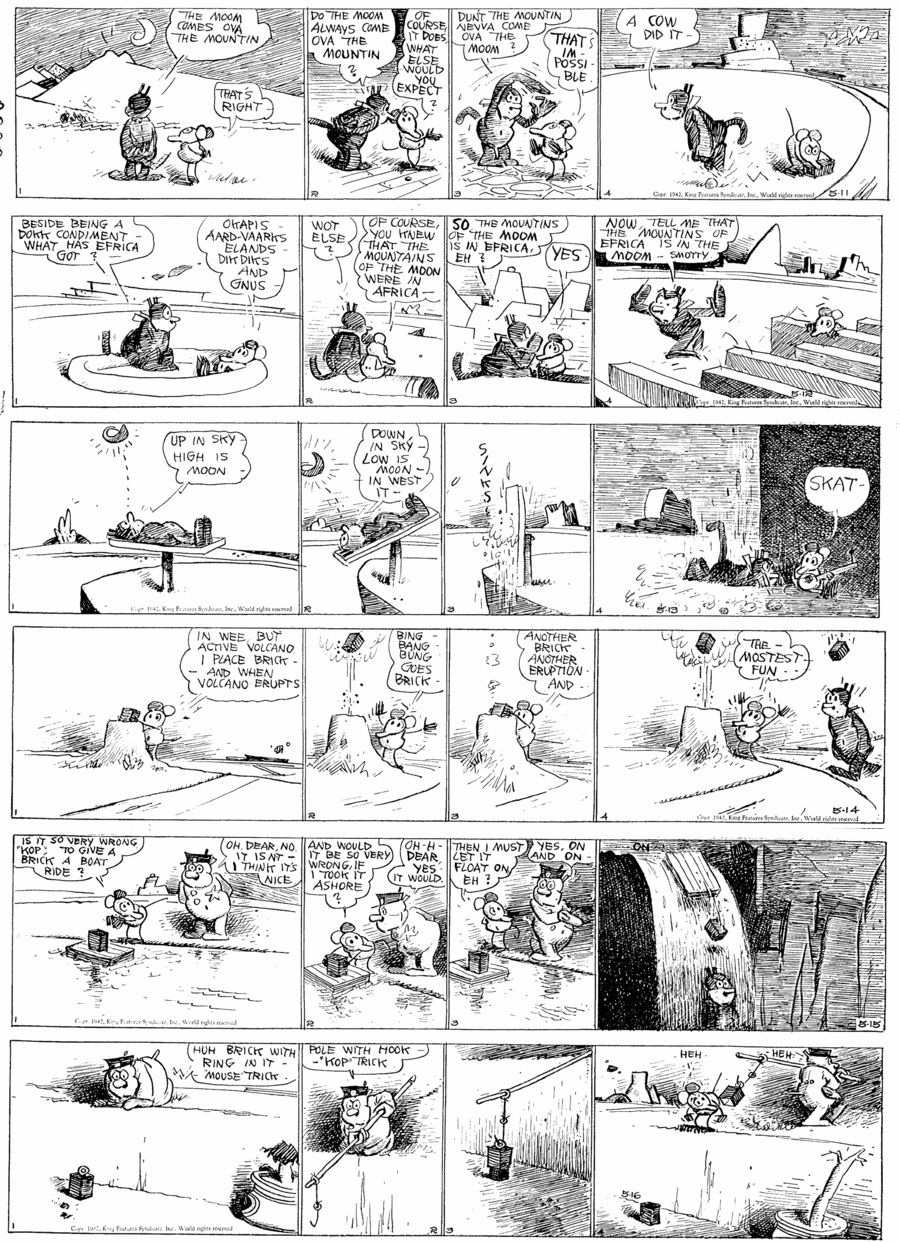 Â The Krazys are from 5-11 to 5-16-1942. In the first panel of the 5-12, Ignatz mentions many African animals by their correct names (smart mouse!) such as the Eland (Savannah Antelope) and the Okapi (zebra giraffe). I love the abstraction of the last panel, as Krazy hops over a lot of geometric hedges as Ignatz and K. discuss the “Mountains of the Moom”. The last three strips for the week show Ignatz’s brick ingenuity using geothermal,Â hydro-fall and a “nesting” brickÂ disguise in the 5-16. Next post I will discuss and criticize King Features Syndicate’s rather loose attitude toward their archives, which they exploit on the website “Comics Kingdom”. 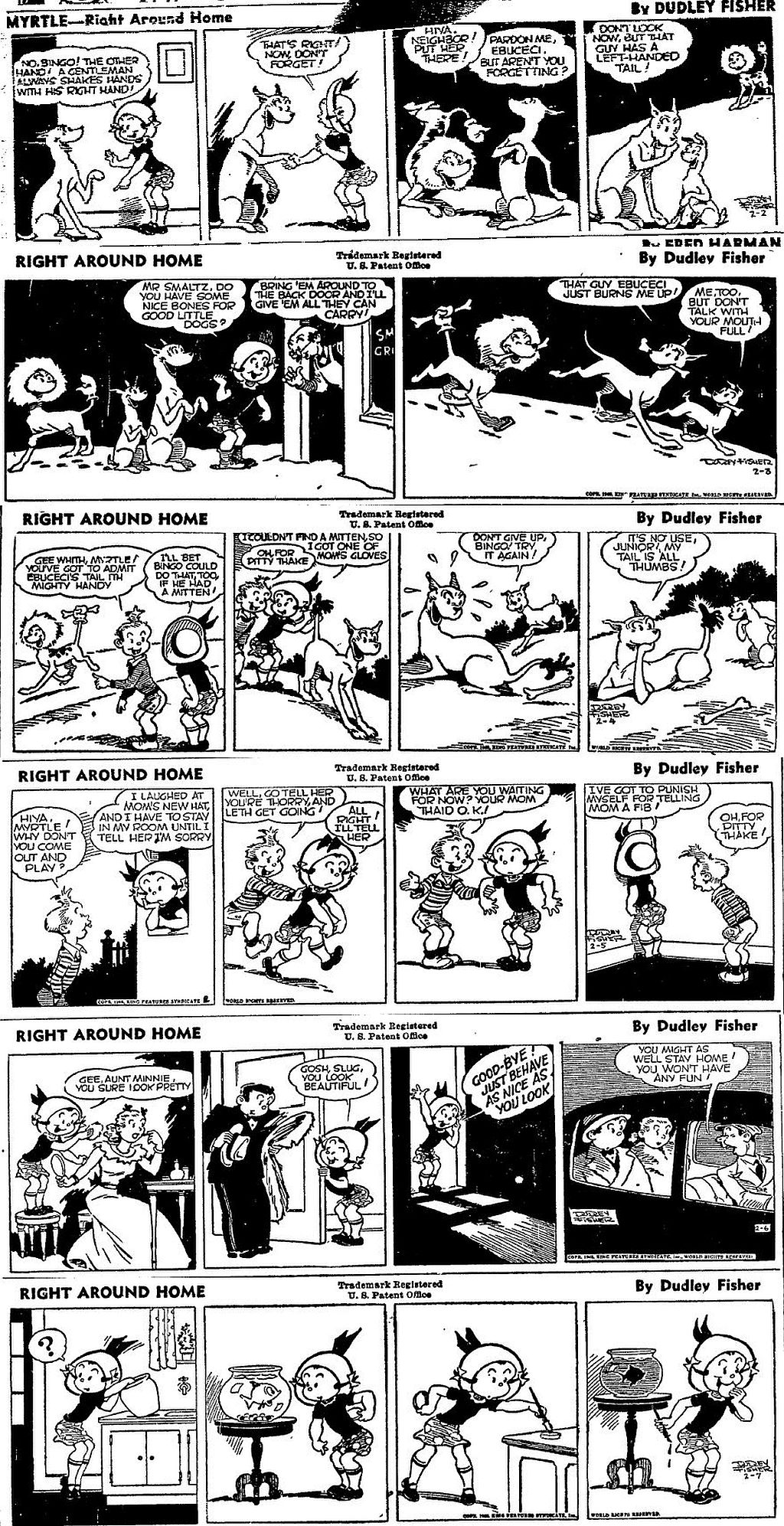 Â In the Myrtle dailies from 2-2 to 2-7-1948, Ebuceci the Alaskan dog has a prehensile tail that can hold bones when it has a glove attached to it. Of course Bingo is very jealous, for when he tries to hold a bone with a glove attached to his tail, he’s just “all thumbs”. In one of Dudley Fisher’s rare flubs at visual humor, the 2-7 is a little inept. It appears that Myrtle is trying to paint the fish bowl black so that the family’s pet goldfish can’t see her stealing cookies. In the third panel, I can’t make out exactly what Myrtle is doing, is she using a fountain pen, or a brush, is that an inkwell she’s dipping her pen into, or just a flat dish? If you readers can explain this one, please comment. Just click the thumbnail image above, to see it larger.

Â Felix continues his running battle with bulldogs in the dailies from 4-30 to 5-5-1934, and in the Sunday from 5-6-34, encounters walrus at the South Pole (is that possible?). Mr. Dooit tries to fend off the bulldog that’s been chasing Felix these last few weeks in the 4-30, then the owner of the Kennely Kennels shows up to pick up the miscreant dog, but leaves another one in it’s place. Messmer is just about as good at creating funny cartoon dogs as he as with felines. Just look at the crowds of canines in the 5-4 and 5-5. There is something quietly humorous about Otto’s dialog balloon placement sometimes, witness his little “bow” balloon in the last panel of the 5-4. In the Sunday, the Funny Films topper has a little lady who reminds me of the heroine of the silent cartoon: “Felix Busts A Bubble”. There is a sequence in that film in which Otto animates a whole range of emotions on the little brunette’s face as she acts for the camera. The faces in the Funny Films topper, resemble the brunette’s, even though this one’s a blond. Felix continues his travels beyond the Zodiac, as he lands at the South Pole as the Mascot of the two aviators introduced a couple of Sundays ago. I love Otto’s funny walrus who show up in the last panel of the 5-6 Sunday. I hope you enjoy these wonderful comics, let me hear from you.