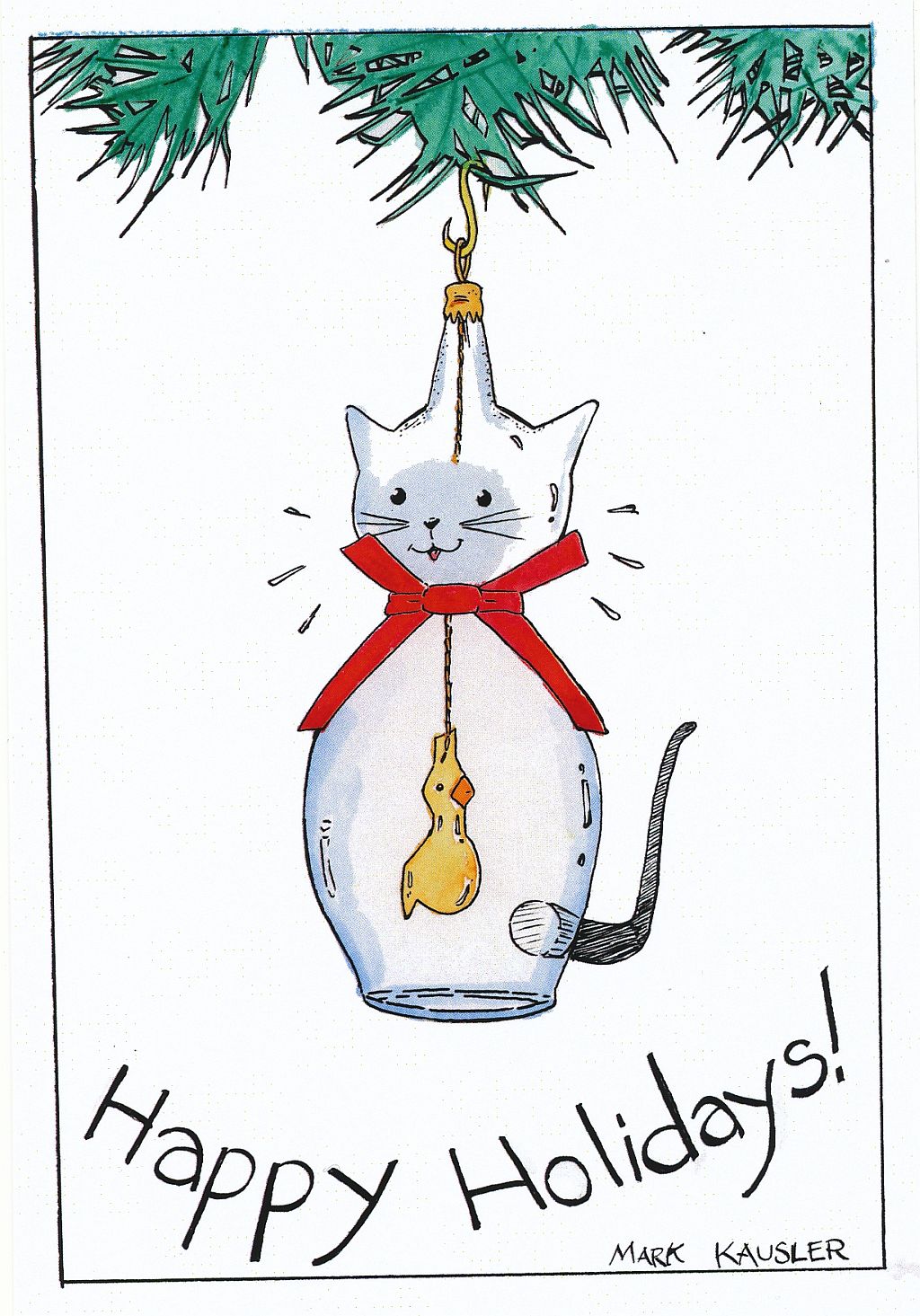 Â Wishing you a Merry Un-Christmas and Chanukah! I’ve been spending a lot of time sending out our annual Holiday Card and writing a message on each one. This year the card was based on an actual ornament, which we thought was a very cartoony and quietly subversive one. This is one of the few cards we’ve done that has actual color printing on it, usually I hand-color them. We stalwarts who print and send our Holiday Cards through the mail are a dying breed. More and more greetings are sent out by Email these days. I really appreciate the effort behind an artist-produced Holiday greeting, printed on paper. I especially like the cards that are sent by cartoonists and friends in the “business”. Here are a few of my favorites: 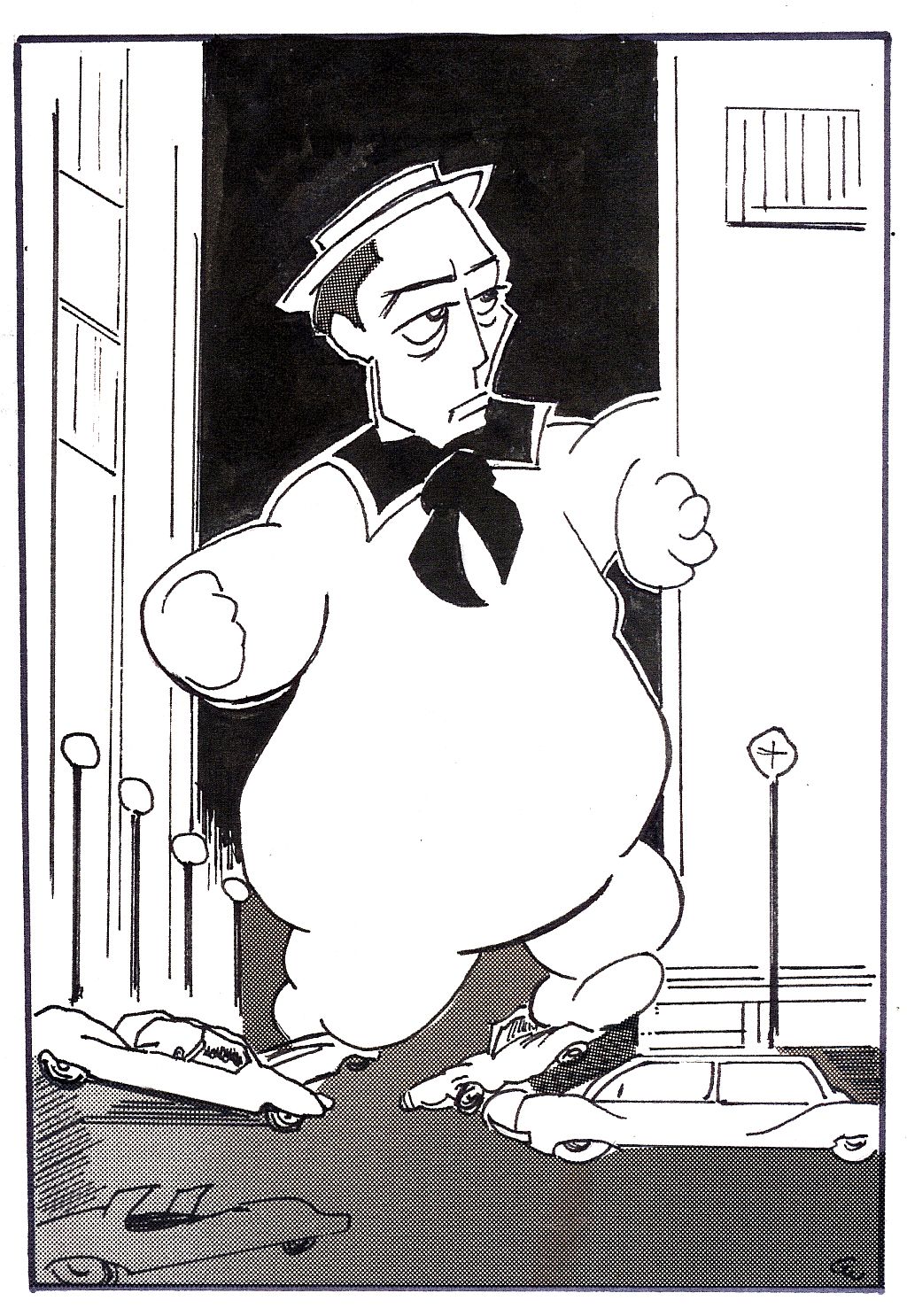 Â Here’s my friend Graham Webb’s card. Graham is a tireless researcher on animation history, he’s published two editions of TheÂ Encyclopedia of Animated Shorts, and now he’s working on an Encyclopedia of Live Action Shorts of the Twentieth Century. He likes to draw caricatures and turn them into cartoons, this year he’s drawn “Ghost Buster (Keaton)” and says “Have a Spook-Free Christmas”. He could also have called it “Sta-Puffed Buster”.

Â June Foray’s card this year showcases her versifying and her dogs! She is a wonderful friend, both personally and for the animated film. She’s been doing voices for radio and cartoons since the 1940s and still continues to do them. My favorite voice she’s done? Midnight the Cat in “The Buster Brown Show” on radio, written by Hobart Donavan. The Annie awards were her idea. She’s recovering from a fall right now, so I wish her a quick recovery. 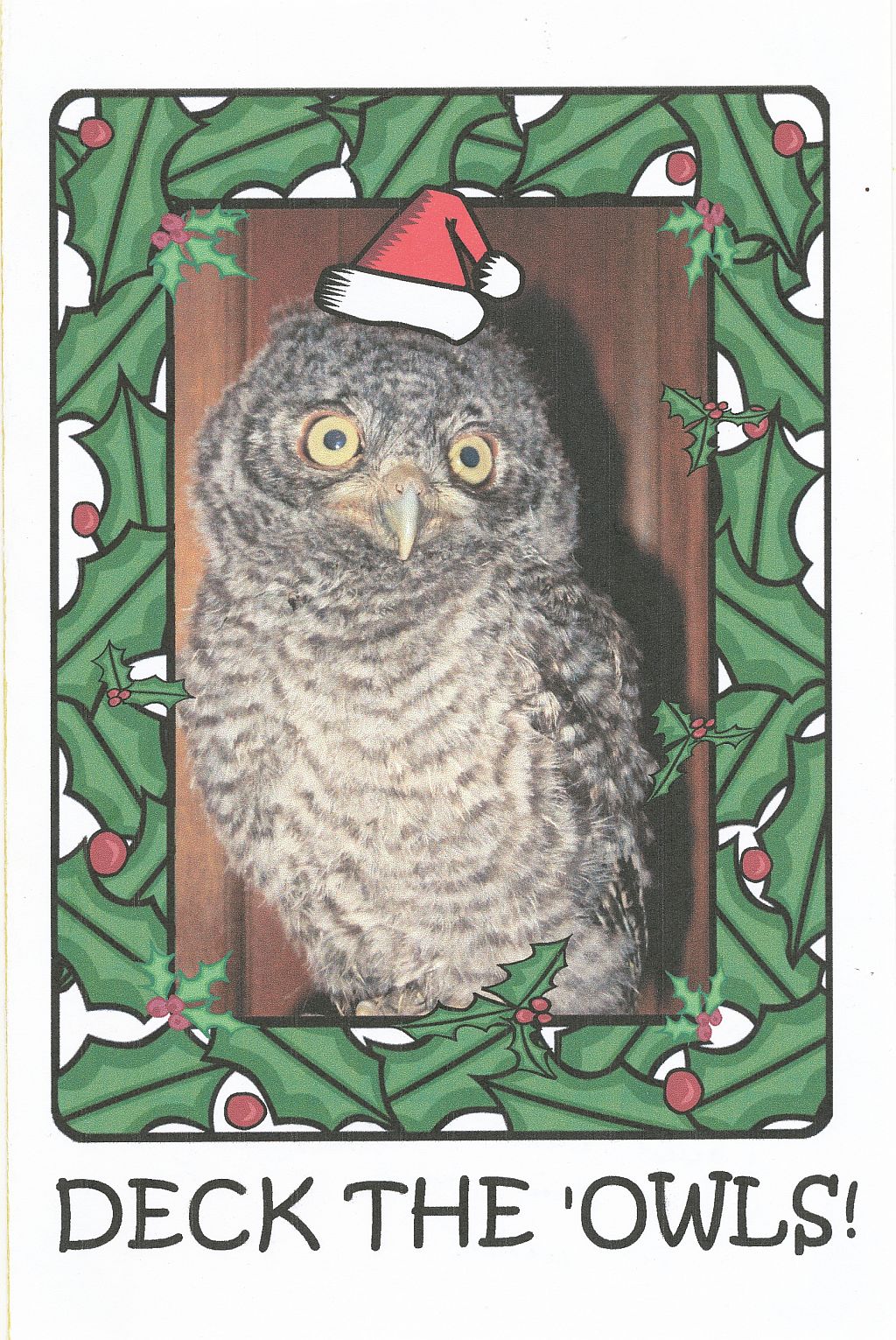 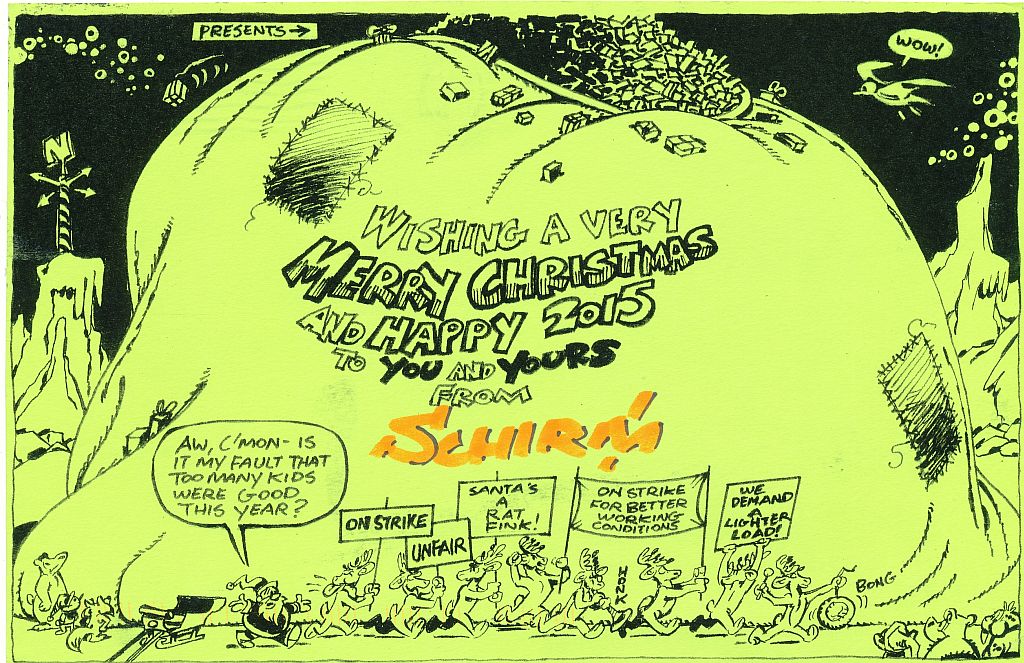 Here’s Roy and Dann Thomas’s card. Roy, of course, being a long-time writer of comics, mostly Marvel. He’s quite the historian and collector of comic books as well. Roy and Dann (his wife) live on a farm and love to take care of animals. They found theÂ owl on their card lying face-down in the courtyard, and nursed him back to health. Then he was released back into the wild.Â  The light green tinted card is from Marc Schirmeister, a veteran cartoonist and story artist, he almost always draws his own card each year, sent out as a postcard. Santa’s pack seems to look like a giant ass in this one! There’s also a little labor union humor here. 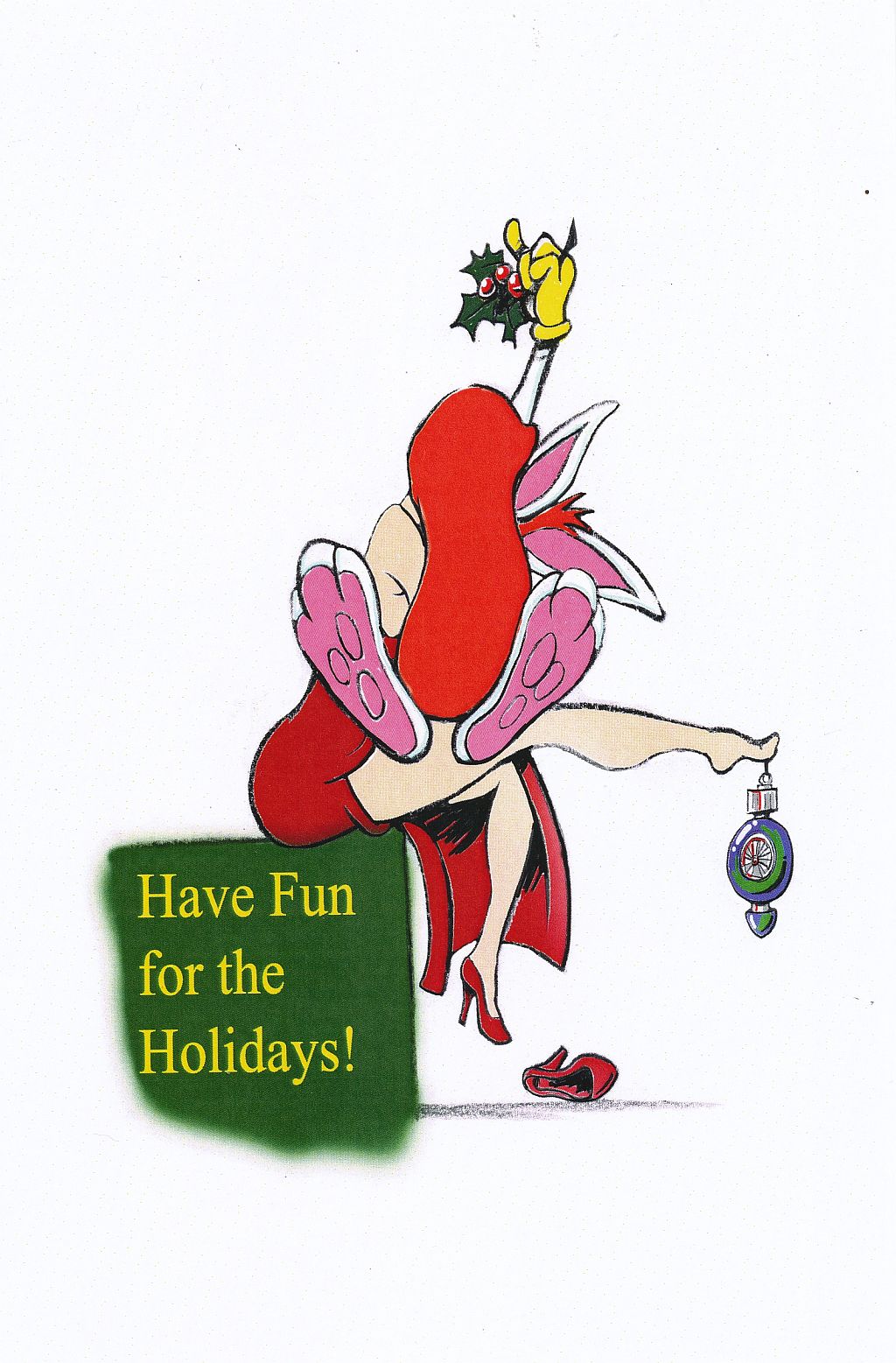 Â Here’s Tom and Pat Sito’s card, showing us how Roger and Jessica Rabbit have fun! Tom Sito is a world-class student of world and animation history, a director (Osmosis Jones), animator (Roger Rabbit) and story artist. He is teaching at USC and hoping to be a tenured professor there one day. 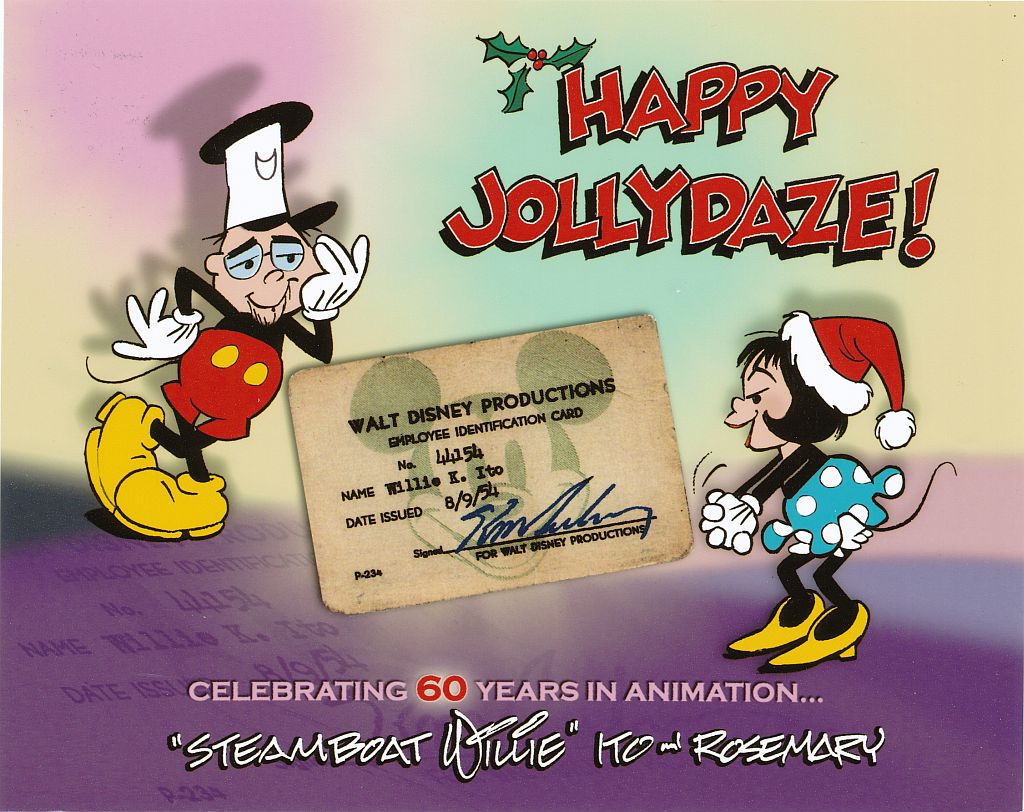 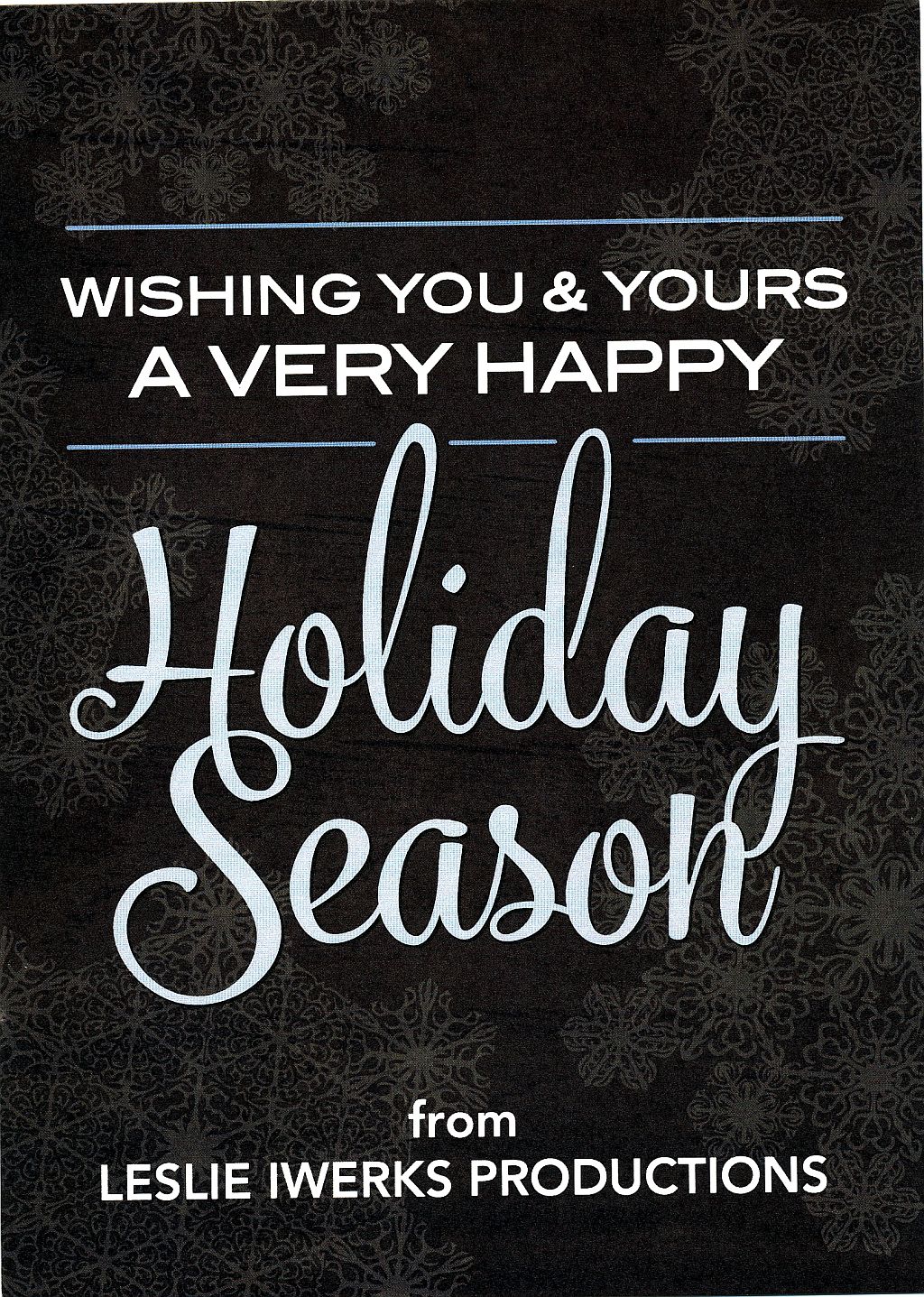 Here’s good friends Willie and Rosemary Ito’s card. It shows the legendary layout man’s Disney Productions ID card from 1954, when he was working on inbetweens for “Lady and the Tramp” under the World’s Greatest Assistant Animator: Iwao Takamoto. Willie sent me some Magilla Gorilla layouts he did when I was a kid, and bowled me over with his generosity. He now does wonderful children’s books likeÂ “Hello Maggi”, about the life of a child confined at the Manzanar camp during World War 2. Willie has a wonderful collection of Mickey Mouse memorabilia, so now he’s “Steamboat” Willie!

Â Â Â  Leslie Iwerks is another good friend who is the grand-daughter of Ub Iwerks, ( I was lucky enough to meet him in 1968), who remains one of my greatest cartoon heroes and influences. Leslie is a wonderful documentary film-maker, she’s done one on her Grandpa, “The Hand Behind The Mouse”, one on Pixar (“The Pixar Story”)Â and a great piece called “Recycled Life” on theÂ people who liveÂ on the trash dump near Guatemala, Mexico. She’s currently working on a doc. about the Imagineers at Disney. 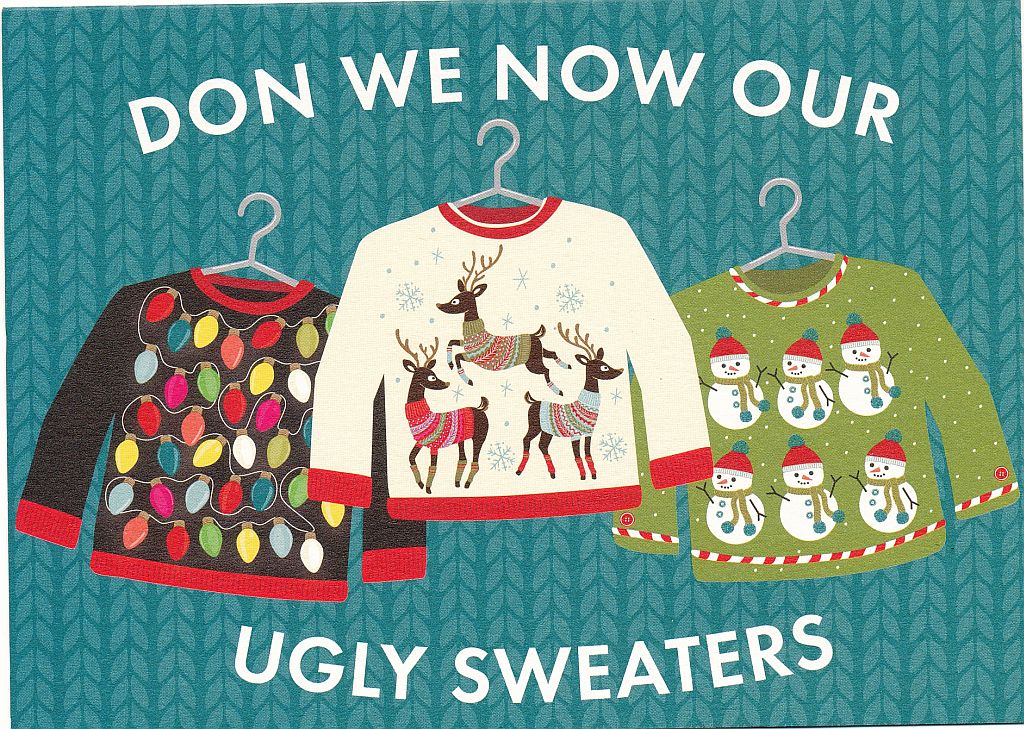 Â I’ve included my friend Bob Jaques’s and Kelly Armstrong’s card, even though he did not draw it, because I think the idea’s funny (and Bob could easily have drawn it). Bob is a long-time animator and animation director, best known for his contributions to “The Ren and Stimpy Show” and the modern update of “Baby Huey” alongside many others. He has a terrific blog on Popeye animators: http://popeyeanimators.blogspot.com , go over there right now and read his post on the Fleischer Popeye cartoon “Onion Pacific”.

Felix, from 7-16 to 7-22-34, continues the Scarecrow Bandit adventure. The Bandit escaped jail last time, and continues to elude the cops and the bulldog. He abducts Felix and manages to pin his subsequent crimes on the hapless cat. Scarecrow can’t get away with this forever! In the Sunday, Felix is stuck on a deserted ship, as the crew leaves for shore with their new-found riches, provided for them by the lonely cat.

Â In Myrtle this time, from 4-19 to 4-25-48, Dudley Fisher features mischievous Myrtle mixing up her mater and pater as always. I like the 4-21 as Myrtle is too busy taking a bath to take a gift of an ice cream cone, so Sampson shoves it in the mailbox! The 4-22 is a favorite also, as Freddie tries to lure Bingo to his bath by making a noise like a rabbit, then consulting with a realÂ bunny (“Let’s hear you say something!”) to find out what a rabbit sounds like. We also found the Sunday page this time, as Freddie poses for a picture. 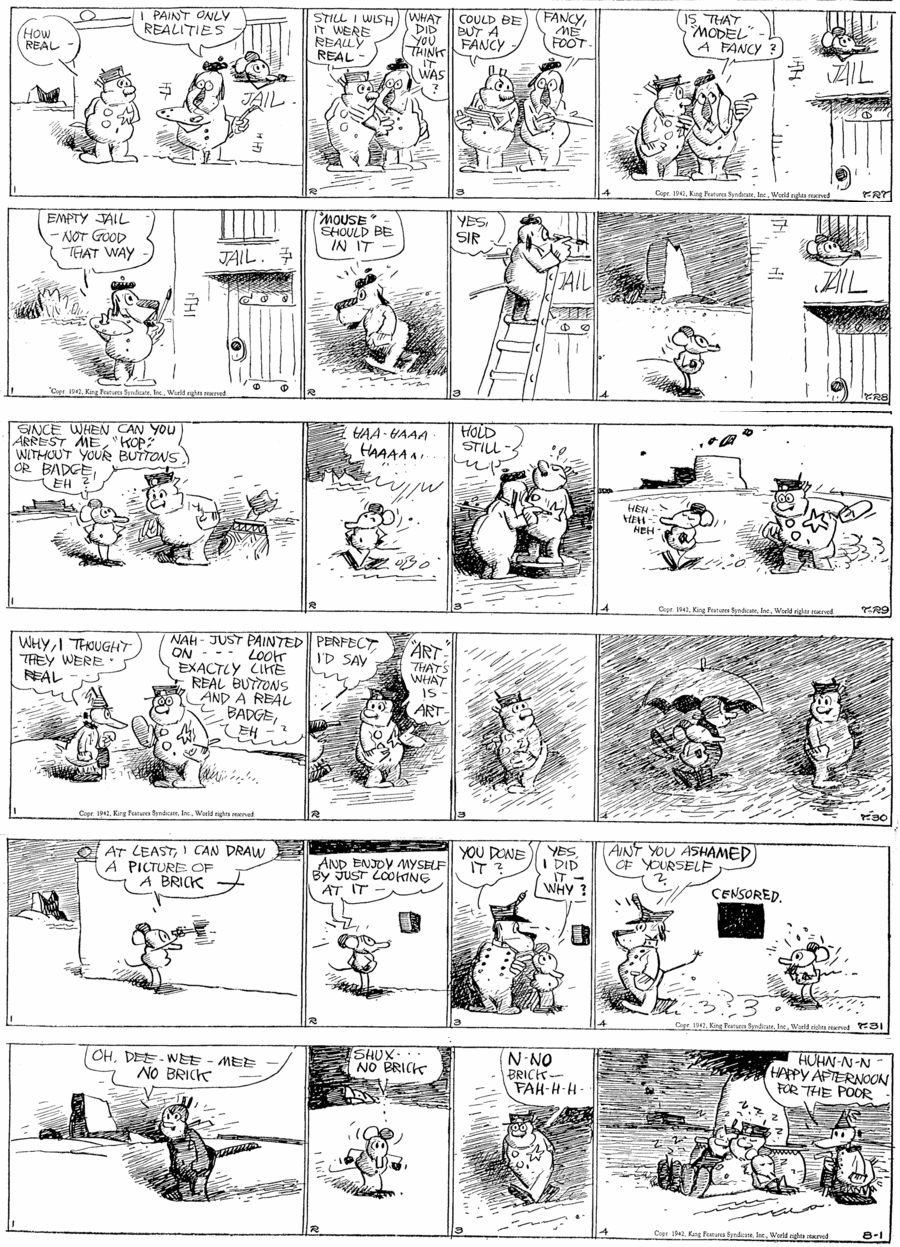 Â Krazy, from 7-27 to 8-1-42, explores the half-way point between lines on paper and solid objects in the strips this time. A dog artist draws Ignatz in his cell so realistically that it puzzles the “mice” himself. Offissa Pupp’s badge and buttons appear and disappear as the lines they are drawn with wash away. Ignatz draws a realistic brick on a wooden fence, but another Law Dog censors it. In the 8-1, there are no bricks at all, due to the War materials shortage, and the three featured players take a nap under a tree.

Â The Yogi Bear Sunday pages are here from January, 1965, the third-page versions. Yowp, at http://yowpyowp.blogspot.com/ will be posting these pages at half-page size in black and white very soon, so keep an eye out for those. Remember to click the thumbnails to see the comics at full screen display. Harvey Eisenberg still has the feel of momentum and action in his drawings in these pages that he must have had in his layouts in the golden days of the MGM cartoon studio. The pose of Yogi throwing the snowball in the 1-3, has that Tom and Jerry quality to it, as does the sled dog being cracked with the whip in the 1-10.Â  The stampede of animals (with the moose silhouette) in the 1-17, and the Ranger sailing on the ice in his ice boat in the 1-31, passed by Yogi with an outboard motor strapped to his back, also have the lively animation layout quality.

Here’s hoping that all my readers will enjoy New Year’s Eve, and that we will all quaff a root beer for Auld Lang’s Syne. See you next year!