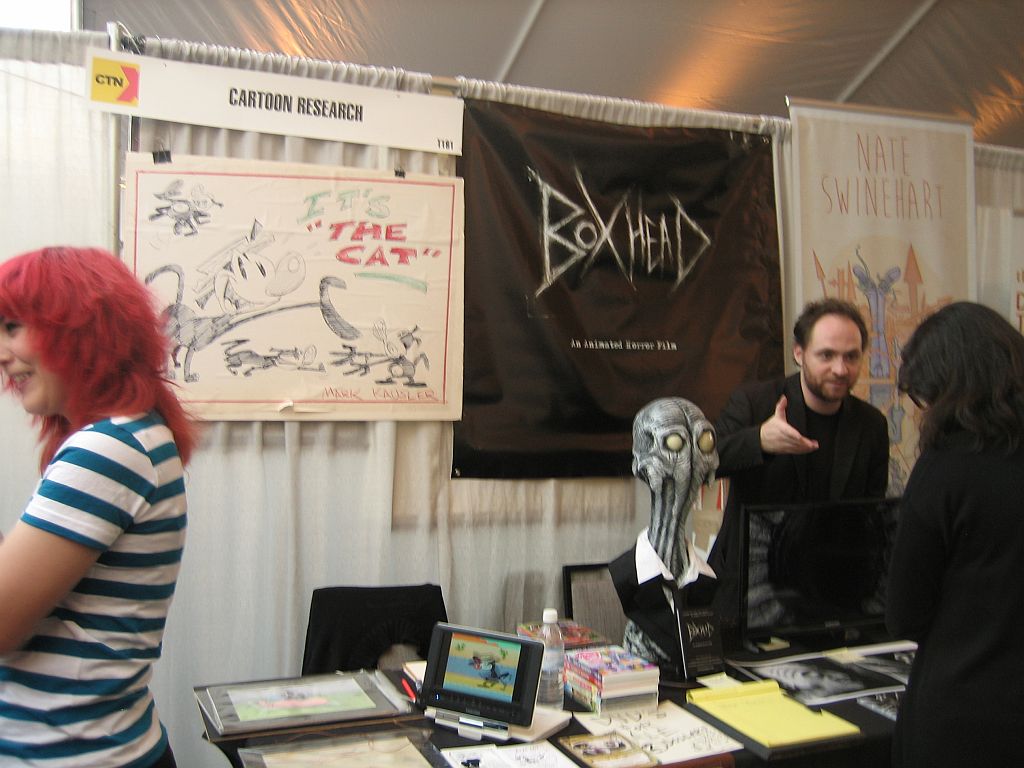 CTN Expo (11-21 and 11-22-2014) Randall Kaplan explains his proposed feature length macabre cartoon, “Boxhead” to a prospective supporter. That’s a sculpture of Boxhead on Randall’s right. Randall is the son of animation director Yvette Kaplan, and he’s quite a visionary. Years ago, some friends and I pipe dreamed about a “horror” animated feature and sort of laughed off the idea as not having a chance of a hot tamale in Iceland of being sold in the mindset of the then-current animation market. Now time has rolled along and there finally might be enough of a market for a true “scare” or “horror” animated feature to take theaters by storm. Randall has a lot of guts to want to make a feature on his own, all hand-drawn; he will need some help. I told him that David Lynch (director of “Eraserhead”) might really be impressed with the project. If anyone reading this can get in touch with Mr. Lynch, please let me know. It was fun sharing a table for a couple of days with Randall, we had some good talk. Itza and I wish him the best. By the way, Randall animates houseflies really well! If you see his presentation trailer for “Boxhead” you’ll see what I mean. 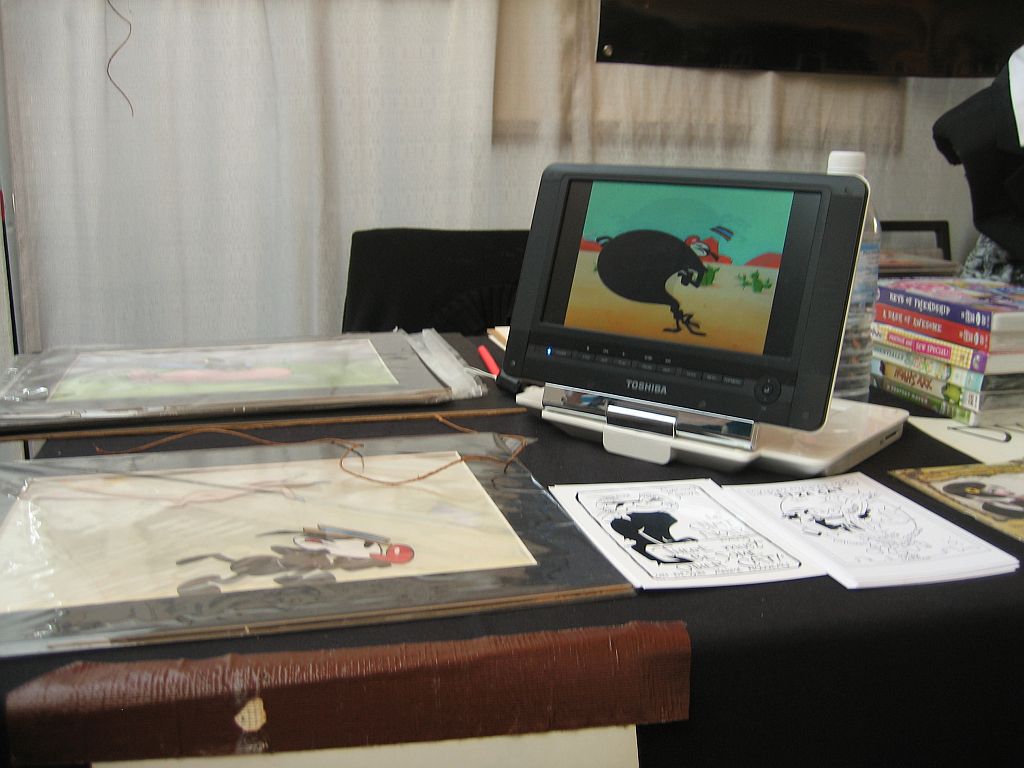 My half of the Cartoon Research table at CTN Expo. I had many cels from “It’s ‘The Cat'” and “Some Other Cat” for sale and managed to sell three. The faithful Toshiba miniature DVD player completes the “point of purchase” display. I didn’t have much notice that Jerry Beck would have space for me at the Expo, so didn’t bring any “new” cel set-ups, but I still have a few of the older ones. You can buy them too, just click over to the “It’s ‘The Cat'” website: www.itsthecat.com .

The Expo was the usual crowded madness, only more so. There are soÂ many young women and men with good portfolios (most on Ipad display), and I’m afraid most of them are not in the least prepared for the often uncreative and high-pressure environment that the profession can be. To keep your vision and believe in it with all the negativity that can be directed at you, can be quite anÂ exercise in tenacity. If you are not stubborn and have too many self-doubts, you may as well seek other outlets. Remember it’s easier for a big corporation to green light yet another Marvel superhero, Batman or Bugs Bunny resuscitation, than to take a chance on a young filmmaker’s new dream. I noticed that many young people draw in a Glen Keane/Cal Arts character style, maybe too many. I didn’t see a whole lot of graphic originality at the Expo, so Randall’s project really stood out to me as aÂ lodestone that might just pull some risk-takers into it’s orbit.

Felix (7-9 to 7-15-34) just can’t get no respect. After giving the reward for the capture of the Scarecrow bandit to the Yiminy family, Felix finds that they have gone “high-hat”. They don’t want him in the house damaging the “snappy” furnishings (“snappy” was a popular slang word of the 1930s), the pasture has become a golf course, and the horse, cow and goat don’t like their gentrified barn. To top it off, the Scarecrow bandit breaks jail and uses Felix’s tail for a fake jail bar (see the 7-14). In the Sunday, Felix continues his fish ride away from the Antarctic, and winds up under the sea. Felix must be part cat-fish, as he is able to breathe underwater. He finds a treasure chest and becomes a hero to the crew of a passing ship as they pull him out of the sea, chest and all.

Myrtle (4-12 to 4-18-1948) is her irrepressible self in the strips this time. She’s punished for making faces in the 4-14 by standing 20 minutes in the corner. In the 4-16, she has a bet on with her Dad that she can’t sit still for ten minutes without giving the impression that she’s sick, and in the 4-15, Myrtle gets scolded for talking curtly to Hyacinth the cat! The Sunday page is included, Freddie’s driveway gets no respect from his neighbors, SampsonÂ or Bingo the dog. 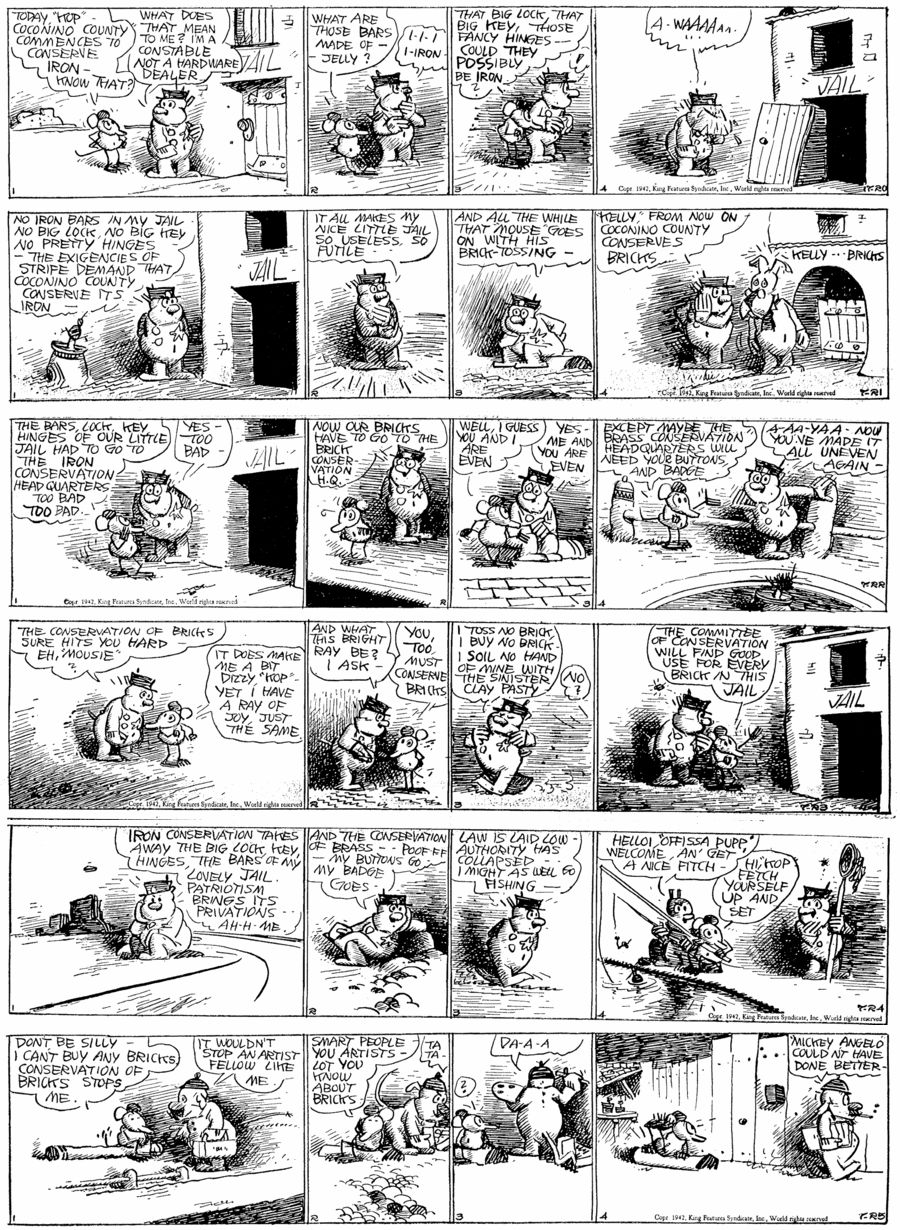 Krazy (7-20 to 7-25-1942) is influenced by WW II’s rationing of essential materials this week, notably, iron, clay and brass. Offissa Pupp’s jail is missing it’s bars, locks and hinges because they are iron and collected for the scrap drive. Ignatz’s bricks are gone, because clay had to be conserved as a rationed substance, and even Pupp’s badge and buttons are in danger of being collected, since they are made of brass. But in the strip for 7-25, an artist cheers up Ignatz by painting a very realistic brick on a wooden fence. “Mickey Angelo couldn’t have done better”, sez the artist. The gentle and hopeful artist might have been George Herriman, himself. 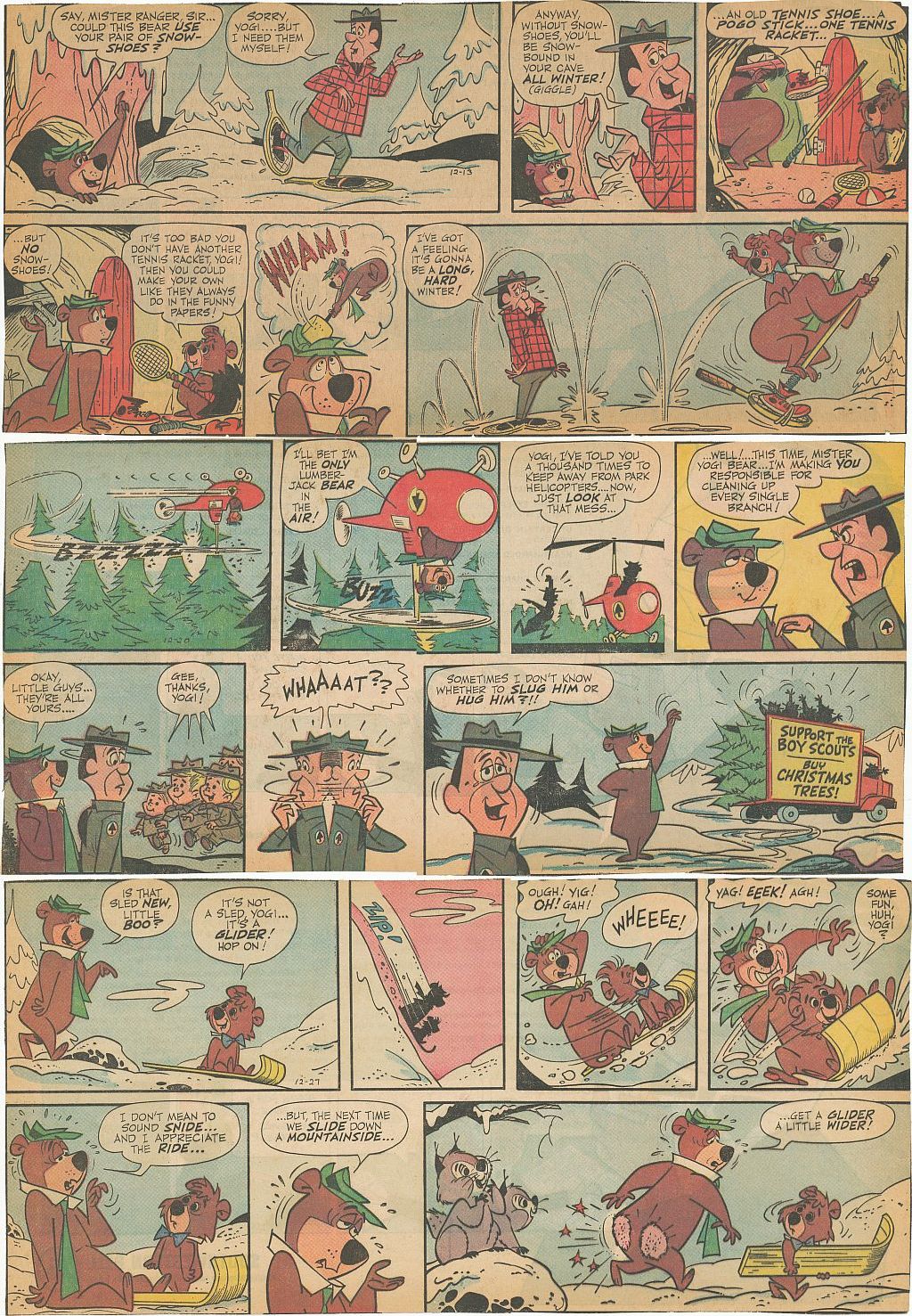 Yogi Bear (December 1964), with the strip for 12-6 missing. Maybe we didn’t get the paper that day, ’twas a long time ago. In the 12-13, I love the panel where Yogi gets his tennis racket/snowshoe idea suggested by Boo-Boo.Â Â A miniature Yogi hits his head with a mallet (Panel 5)! The Christmas tree gag in the 12-20 is kind of heartwarming, as Yogi donates his ill-gotten shrubs to the boy scouts (I’ll bet Bill Hanna liked that). I love Yogi’s super-tolerant expression in the 4th panel as Mister Ranger chews him out. Harvey Eisenberg was great at drawing story-telling faces. The 12-27 is a wintertime butt joke, as Yogi’s fur gets worn off in two strategic spots. 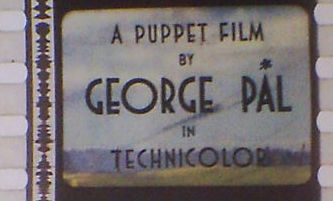 I heard today that a good friend of puppets and animation, Bob Baker, has passed away. Bob ran the Bob Baker Marionette Theater in downtown L.A. for many years, putting on some imaginative shows, like his version of “The Nutcracker”. I first met Bob when I was part of an animation peer group at the TV Academy. If I had known then that Bob was one of George Pal’s stop-motion animators on the Puppetoons, I would have asked him more questions! Later on, I got to hear more of his stories as we chatted on the phone every year at Christmas after he got my card. Bob was also a big fan and supporter of Itza Cat; I sent him screeners of the two shorts, and he thought they were funny. When I worked at Renegade Animation, the whole studio went to see the Marionette Theater’s holiday show, followed by Balian Ice Cream in cups! (Balian ice cream is a Los Angeles institution.)Â  Bob told me an interesting story about the making of a Puppetoon called “Jasper’s Booby Traps”, which called for miniature props that used real food loaded with Puppetoon dynamite. There were miniature (and some full size) steaks, pies, pork chops and a Technicolor maraschino cherry. Bob was in charge of all the props, and he left them out in the studio overnight to prepare for an early morning shoot the next day. When the animators and cameramen showed up, all the food had been consumed by the studio rats while theÂ building was closed. It caused quite a delay in production! Bob, you will be sadly missed. 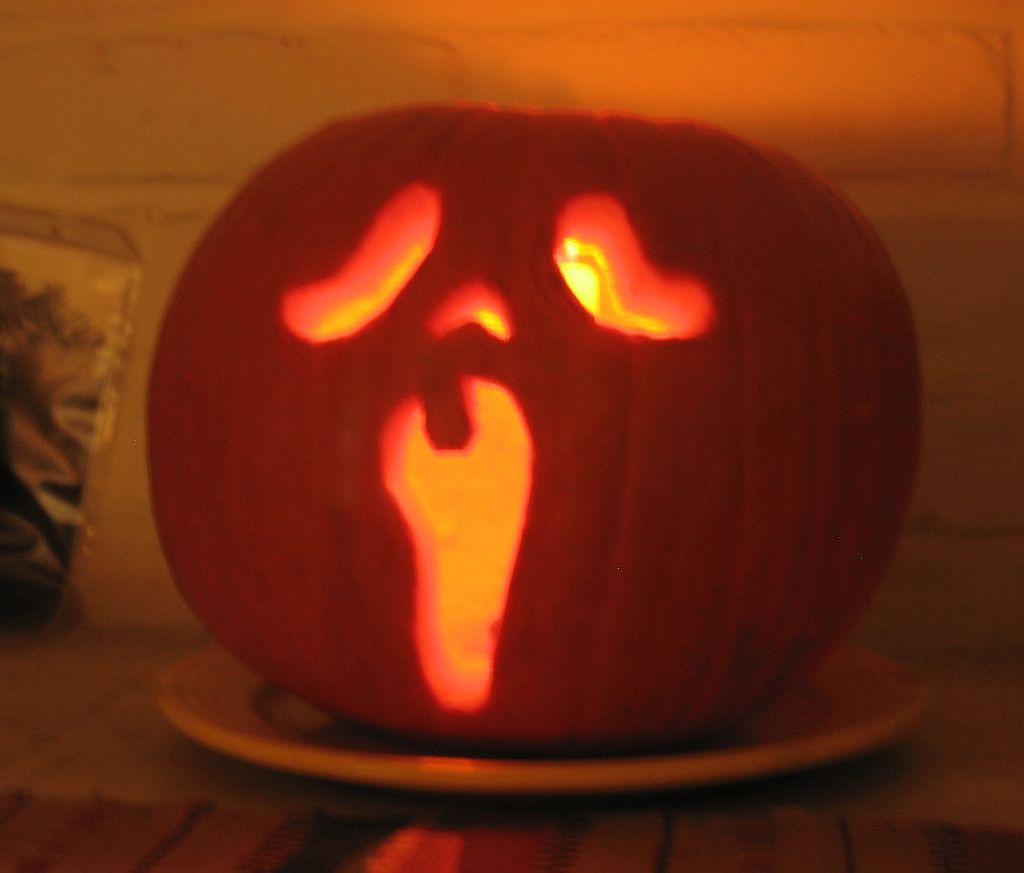 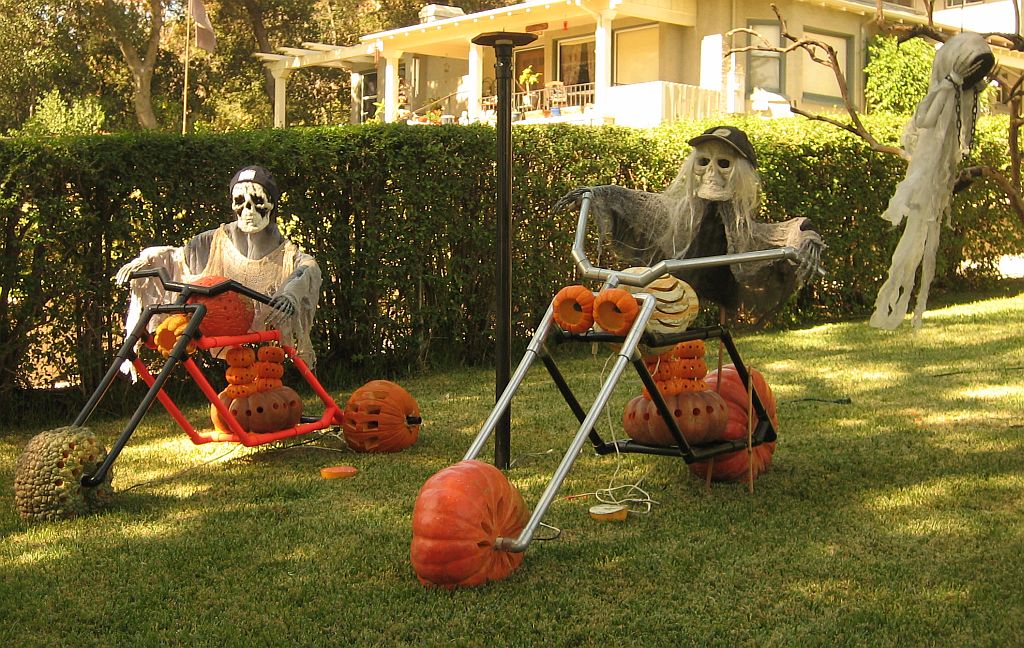 Â I think the years are passing by with incredible rapidity, so let’s slow down just a little before we crash into Thanksgiving and remember Halloween! Cathy and I had fun on Halloween, and I’m not over it yet, so here’s a photo of our pumpkin and a pair of skeleton bikers. The pumpkin is a tribute to “The Scream”, the painting and the movie, and the bikers were among the street decorations on Alegria Street in Sierra Madre, Ca. I love how the wheels and the motors of the motorcycles are made entirely of carved pumpkins. The folks who put these up go all out every Halloween and even grow their own giant pumpkins in the back yard for carving. They put up a dragon on their front walk which was composed entirely of carved pumpkins tied together to form the long, segmented body. You can see why I’m still back there on Oct. 31st!

Â It looks like Felix has finally escaped from Antarctica in the Sunday from 7-8-1934. The explorers put him out of the igloo for the night, but the nights are six months long in Antarctica, so Felix flags down a big fish and gets a rideÂ out onÂ the Arctic ocean. In the dailies from 7-2 to 7-7-1934, Mr. Yiminy gets a big reward for Felix’s capture of the scarecrow bandit, and ties up an IRS man when he shows up to collect the taxes on it. Mr. Yiminy is showing his country gentleman side, now that he can afford it. How much longer will Felix keep his new home, before the Yiminys decide that he isn’t “chic” enough for them with their newfound one-percent status?

Â In Myrtle, from 4-5 to 4-11-1948, Dudley Fisher entertains us with the newly discovered prowess of Bingo, Myrtle’s dog, as a baseball pitcher. In the 4-8, Bingo learns to fetch and brings Papa the garbage, in the 4-9 and 4-10, the talented Dog is actually able to toss a ball with his front right leg just like a human. I like the 4-10, as Myrtle’s folks try to take all the credit for Bingo’s pitching, but all Bingo gets out of it is a sore leg! The Sunday page is here, too, with a wonderful Fisher 3/4 downshot of the Right Around Home gang finishing the repairs on their fishing boat. 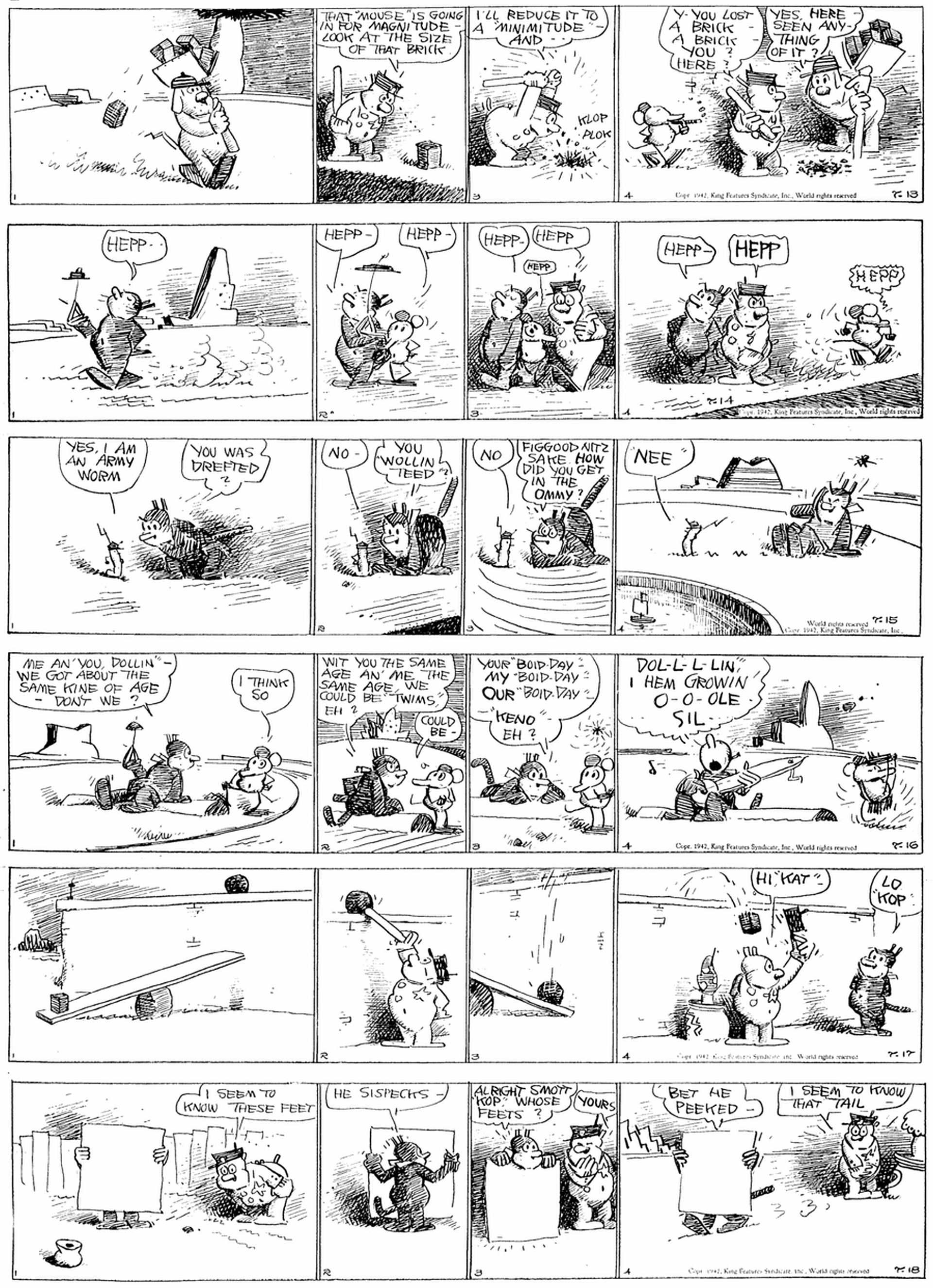 Â In Krazy from 7-13 to 7-18-1942, there isn’t much continuity. I like the 7-14 strip, composed of one word of dialog, “Hepp”, started by Kat and picked up by Pupp, ending with a disgruntled “Mice”. Hepp-Hepp was an oft-repeated swing era phrase, used in a popular song called the “Jumping Jive”, maybe Garge was reflecting it’s influence here. In the 7-15, there is a nice little exchange between Krazy and an “Ommy” worm, reflecting the military timeliness of 1942. There is a choice bit of Kat Langwitch in the third panel as Krazy says “Figgood Nitz sake, how did you get in the ommy?”, to which the worm replies “Nee”, meaning he was born into the “Ommy”.Â  In this daily we also can see the little stage set footlight decorations that Garge favored, evolving into the edge of a pond. The cross-hatching in the first panel with Krazy emerging from it’s midst, conveys an ethereal existence for the Kat, heÂ materializes out of ink lines! See you again very soon!