The Duane Crowther Letters Part One 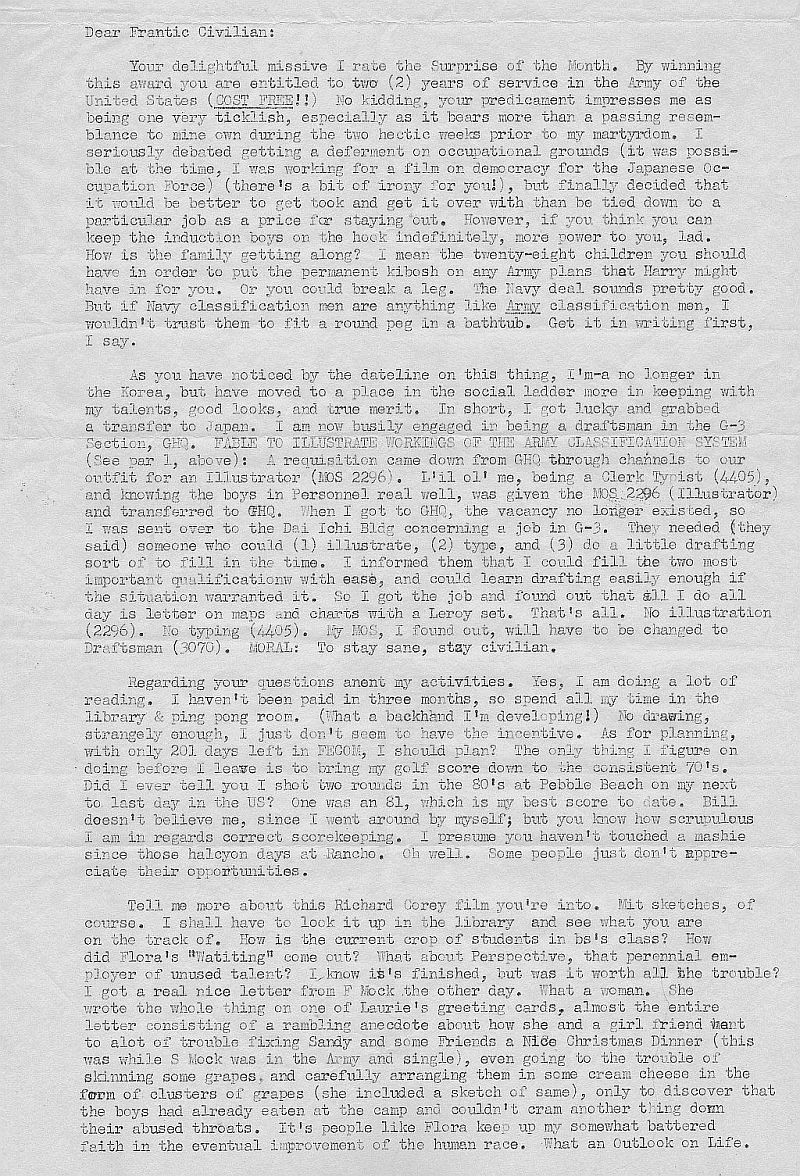 From the collection of Robert Balser, we present a few letters that my late friend and boss, Duane Crowther, wrote in the early 1950s mostly to Robert Balser, or as Duane called him: “Bobbert”. The first letter from 1-29-1951 is written to a Major Harback, who evidently had some kind of Armed Forces Animation studio. Duane had been inducted into the Army as a Corporal (Korean War era), and was trying to get aÂ job doing animation. Duane had been working for Les Novros (Graphic Films)Â for 4 years and names the titles of some of the early training films he worked on. He also mentions his stint as an inbetweener at UPA, where he worked on “Georgie and the Dragon” among other cartoons. Duane was well-versed in the technical side of animation, could do “technical animation” which nowadays is 100% digital, but in the 1950s was done with drafting tools and elipse guides and usually illustrated how motors worked. In the second letter, written to Bob Balser from Tokyo, Japan on March 5, 1952, Duane gives a snapshot of his experiences stationed in the Rising Sun land. He was classified a Clerk Typist (!) but kept trying to get animation work. He wound up playing a lot of Ping-Pong and Golf, a sport he continued to play for the rest of his life. He evidently knew and admired the early avant garde filmmaker, Flora Mock (he calls her F. Mock), who made “Paper Moon” in 1949 and “Waiting” (Duane calls it “Watiting”) in 1952. Duane produced his UCLA student film, “Blum Blum” about that same time, 1949. Maybe he met Flora Mock at UCLA. As to what “Richard Corey” is, an educated guess might be that it was an experimental film Bob Balser made in the early 1950s illustrating the poem of the same name. You can read it on Ixquick or Google. It’s about an apparently well-adjusted man who commits suicide. I love Duane’s little gag on the second page of his letter to Balser. These letters are coming to you with the kind permission of Duane’s widow, Cathy Karol Crowther. You will read about Duane’s early years at UPA New York, working with Gene Deitch, Grim Natwick and other folks in subsequent letters.

Â Krazy Kat this time is from 8-4 to 8-9-1941, Krazy adopts a Jelly Fish, who he names “Current” AND “Currant”. Krazy and Ignatz spend the whole week trading quips and puns about Krazy’s new pet. I like the wind-up to the series as Ignatz gets in the final pun: “In a Jam, eh?”

Â Felix, in the strips from 9-23 to 9-29-1935, paddles out to the ship from the Ape’s Island, and dons the Idol’s clay shell to disguise himself as he stows away. In the Sunday page, Felix helps a comic artist get a job as he sprays the comics editor with laughing gas from the Professor’s lab. The Nitrous Oxide induced guffaws land the cartoonist a job. Felix always looks out for the little guy.

Â To help Yowp out, we present third page versions of “The Flintstones” Sunday pages from Oct. 1962 in color. According to Mark Christiansen who commented before, these are the work of Dick Bickenbach, ace layout man, animator, and Joe Barbera’s right hand man in the MGM days. If you visit Yowp’s blog, you can see the top tier of these strips and read his comments on them. These were all snipped from the St. Louis Globe-Democrat in the days when “The Flintheads”, as my Dad called them, were fresh and new.

Â Â Â  It’s good to be posting again, sorry for the long hiatus, but after our trip to San Luis Obisbo and driving more than 800 miles, I just didn’t feel like concentrating on the weblog the way I should. More to come, pretty soon readers! Remember to click on the thumbnails to blow them up, this is especially important to read Duane’s letters.