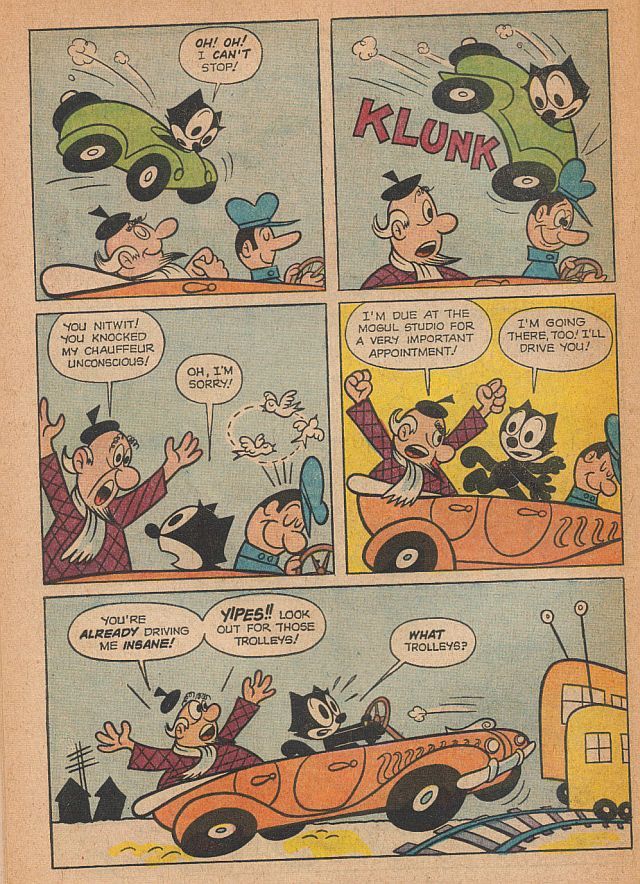 Girls and Boys, I have dried my eyes and now present the next two pages of Jim Tyer’s “You Auto Be In Pictures”. Mike Kazaleh, a regular reader of this bag of spaghetti, wrote this comment about Felix: The current Felix comic story you are printing seemed familiar to me somehow. Then it hit me… so far the story is just like a Muggy Doo cartoon (animated by Myron Waldman)Â that goes by the same name! Did Hal Seegar borrow the story from Tyer (who was working for him at the time)? The cartoon has no story credit.Â

If Seeger asked Jim Tyer for the story,Â Jim probably gave it to him to oblige, after all, why alienate your steady employer? Thanks, Mike for writing this comment. I have seen precious little MILTON THE MONSTER, MUGGY-DOO BOY FOX or STUFFY DURMA, so it’s hard to speculate about these things.

Also in this post are the MARVELOUS MIKE episodes from 4-16 to 4-21-1956. WillÂ  Cliff Crump and his wife be torn to bits by the enraged members of the P.T.A.? You will note that this is the first time that Mike speaks directly to Cliff. At this point, Cliff doubts his sanity and doesn’t believe that the infant quoted Sir Francis Bacon to him. Their relationship changes around as the strip progresses. I’ll be posting again soon, ’til then enjoy the strips!

I Can’t See Ya, Wranglers! 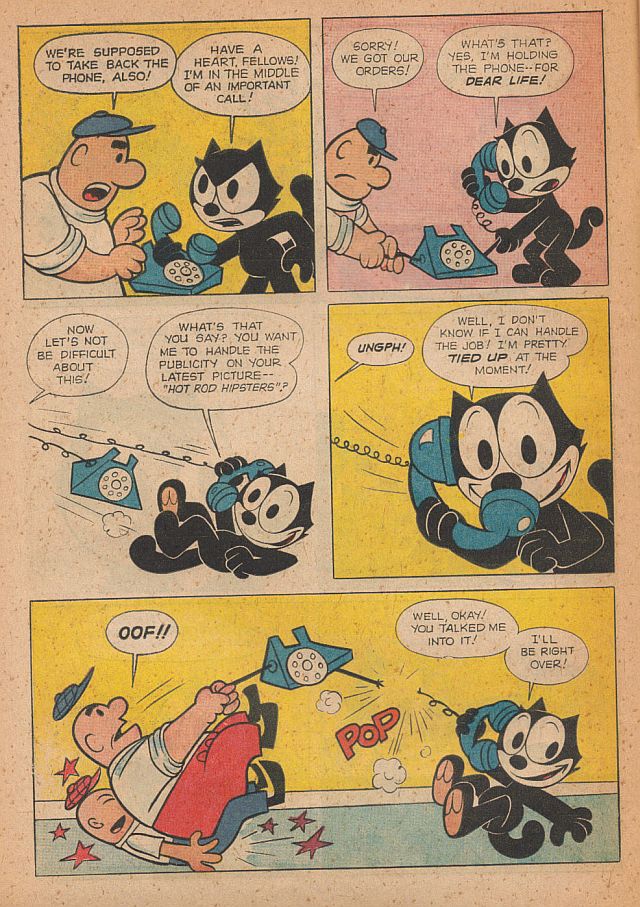 Whew! I accidently deleted last week’s post this morning. I was attempting to delete an unwelcome comment, and scrapped all my text! At least all the comics were saved! If any of my readers copied my post, please mail me a copy of the text and I will re-type it.Â  The post contained “Marvelous Mike”, 4/9/1956 through 4/14, “Wee Pals”, 2-19-2008 and the next two pages ofÂ  “You Auto Be In Pictures” by Jim Tyer from Felix #3, Dell 1963.Â  That’s a very dark photo of Harry Gibbs, alias Texas Bruce, reproduced from the St. Louis Post-Dispatch of 1956. Harry had a show on St. Louis television called the “Wrangler’s Cartoon Club”, thatÂ poisoned my mind with countless old cartoons, Looney Tunes, Betty Boops, Little Lulus and the Fema Noveck Flamingo package including many Soyuzmultifilm and Zagreb productions. That’s about as far as I want to go in re-creating this post for now. I will do a new one very soon; right now, I’m going to go someplace and cry a lot!

Alright you computer scientists out there, what causes “runtime error”s? I keep getting a pop-up window supposedly from Microsoft that says there is a C++Â  Visual Runtime Library “runtime error”.Â  The address seems to be: C:\Program Files\Internet Explorer\IEXPLORE.EXE R6025 -pure virtual function call. Is this a virus? It doesn’t seem to be causing any slow-downs or any other problems, just an annoying pop-up window every so often. It may be connected with streaming radio, I don’t know. Any offers of help would be gratefully accepted.

Last week, Cathy and I went to Claremont and a new housing development near the Padua Hills Theatre, an old theatre building dedicated to live performance. It was a beautiful place, we painted the side entrance to the theatre, a series of white columns receding into the distance, surrounded by a dark grove of olive trees. Cathy’s painting was well-composed and well-balanced, with the columns on the left and the Padua Hills Theatre sign on the right. She got some beautiful yellows, olive greens and violets into her painting, and good dark values. I got some good darks into my painting as well, but balanced the composition so that the image was split right down the middle of the page, with the columns on the right and the dark olive trees on the left. Brenda Swenson, our crit master, pointed out that I could re-mat the painting and take the curse off the evenly spaced composition. We’re all getting a lot of valuable advice and experience painting with this great group. After we painted we were invited to the nearby home of Karl and Sandy Flores for lunch! They displayed digital photos of all of the painters at work on the biggest DLP (?) television screen I have ever seen! It was so big and dominated the room so much that it was hard to concentrate on the paintings and the critique. After lunch, Cathy and I drove up to the Mt. Baldy Lodge and village center, hoping to find a little snow. We even brought our snow boots, but only found a few dirty patches of snow, most of it had already melted off from the storms in January. That didn’t stop us from putting a little of the cold stuff down each other’s necks!

This week’s “Marvelous Mike” episodes are from 4/2 to 4/7/1956, and continue the story of Mike’s entry in the school’s first-grade paintingÂ contest. Mr. Crump, Mike’s “father”, has to get Mr. Van Goth, the company’s art director, to be the judge of the contest, which puts him in an uncomfortable position. Again, Mr. Crump is usually the victimized clown in these early Mikes. His adopted son almost always extricates Crump from his convoluted schemes. We also have the last page of “Fair Weather Enemies” and the first page of “You Auto Be In Pictures” from Felix The Cat #3. Jim Tyer, one of the world’s most creative cartoonists, is once again at the helm.

Last week, I did a little tribute to Al Scaduto, as King Features ran his last “They’ll Do It Every Time” strips. A note on the King Features website explains that the last TDIE Sunday page was 2-10-2008. The last one they ran on the website was 2-3, so what happened to 2-10? I’ll let you know when I find out. KFS also says that Scaduto has been doing TDIE since 1948, and that the strip was in 100 papers. I’ll bet that’s one of the main reasons, besides Mr. Scaduto’s unfortunate death, that King is ending the strip. Not much income fromÂ those fewÂ outlets.

In our comics this week, we pay tribute to the late Al Scaduto, who drew and wrote “They’ll Do It Every Time” for King Features Syndicate for many years. He continued the feature started by Jimmy Hatlo in 1929 for the sports page of the San Francisco Call. Scaduto used gag suggestions from his readers as did Hatlo and Bob Dunn before him. Hatlo’s family, the Tremblechins originated in TDIE, as did his devilish little girl: L’il Iodine. TDIE was syndicated in 1936 and continued up to Feb. 3, 2008, the last Sunday page, a run of 72 years! (That’s the last daily, Feb. 2nd, and the last Sunday page above.) Hy Eisman and Scaduto were assistants to Hatlo and Dunn originally, now Hy Eisman is the sole surviving member of the Hatlo “gang”, he still draws The Katenjammer Kids and Popeye for King Features. Milt Gross is tacitlyÂ connected to this gang, as Bob Dunn was Gross’s assistant for awhile.

Here is the text of an e-mail I wrote to Al Scaduto’s family:

Hi Scaduto family,
> Please accept my sympathies on the passing of Al Scaduto.
> I’ve been a fan of Al Scaduto, Bob Dunn and Jimmy Hatlo for a
> long time. I’ve noticed that “They’ll Do It Every Time” is
> continuing under his by-line. Are these strips that Al Scaduto
> back-logged, reprints or done by a new artist under the Scaduto
> name? I really have enjoyed the feature, and hope it can
> continue, if only My Daily Ink would display the Sunday page
> larger with more detail! Again, I think Al’s work was funny and
> I love his drawing, his attention to detail in props was
> especially impressive. He kept pretty much up-to-date with the
> feature right up to the end. He will be missed.
> In Sympathy, Mark Kausler, a fan

Mr. Kausler:Â  Thank you for writing.Â  My father worked approximately two months ahead of schedule so the strip will continue until February 2nd which is the last piece of artwork that he submitted.Â  From what King Features says, they will not have another artist continue with the strip.Â  I can’t imagine anyone else doing it.Â  My dad was one of a kind.Â  I wish you could have met him.Â  He was one terrific guy.Â  Thanks again for your sympathy.Â  Pat Violette

Â Â Â Â  It was very nice of Pat to write me back, I really didn’t expect a response. I think this is an important milestone; the conclusion of a strip that ran a total of 82 years going back to the local run! Scaduto’s drawing remained pretty strong all the way up to the end, I liked how the characters always looked a little like the 1940s, even though they were using cell phones and Hi-Def TVs. I noticed that the hospital jokes were more numerous in the last few months, maybe Mr. Scaduto did some of those strips from his sick bed. I wish I could have met him, as Pat said. It’s very unusual that King Features elected to discontinue the strip, look how long they’ve continued The Katenjammer Kids, for instance. King Features must have recognized howÂ personal Scaduto’s version of the strip was. So long, Al and goodbye to “They’ll Do It Every Time”.Â

Also this week, I have reprinted the next two pages of “Fair Weather Enemies” from Felix #3, by Jim Tyer. Jerry Beck thinks that maybe Joe Oriolo did clean-up on Felix, because he seems to be drawn “on-model”. That may be so.Â  “Marvelous Mike” continues with the strips from 3/26 to 3/31/1956; the next episodes of the “Kimball Ad Agency” storyline. That Mike was a genius, he could write and he could draw. I have started to do real scans of the strips, but they are from inadequate microfilm copies. They are murky, but you should be able to make most of them out.Â  This is probably the only reprint you will ever see, so enjoy.

Cathy and I went out to Encanto Park in Duarte, Ca. last Thusday to paint with our group. We did studies of Mount Baldy all covered with snow. Snow is rare around here, so we all thought it was worth turning out to paint. That brilliant white mountain with dark hillsÂ and Eucalyptus trees in the foreground was quite a challenge. I did two watercolors, and was criticized for leaving too many white outlines around my trees. It was a good call, I do tend to carefully brush around my tree branches and left gaps. Cathy did a very nice oil of the scene, using a lot of purples for her foreground hills. Afterwards we were all invited to a nearby artist’s house for the critique led by Walter McNall and Brenda Swenson. Hot tea was provided, very welcome on a cold morning. An old friend of ours, Dick Tarkington, visited our group from Arkansas, where he lives in a house that’s buried in the side of a hill, on 30 acres. Dick does some of the best figure indication I’ve ever seen in watercolor, he can really give a great impression of humans and animals in action with only a few strokes of a brush. He looked a little thinner and has developed a cough, but still had his old sense of humor. It’s so inspiring to paint with all these great artists! You should come to Encanto park and paint for awhile, now’s the time. While you’re there, visit the Duarte Museum, a beautiful little building on the park grounds. See you soon!