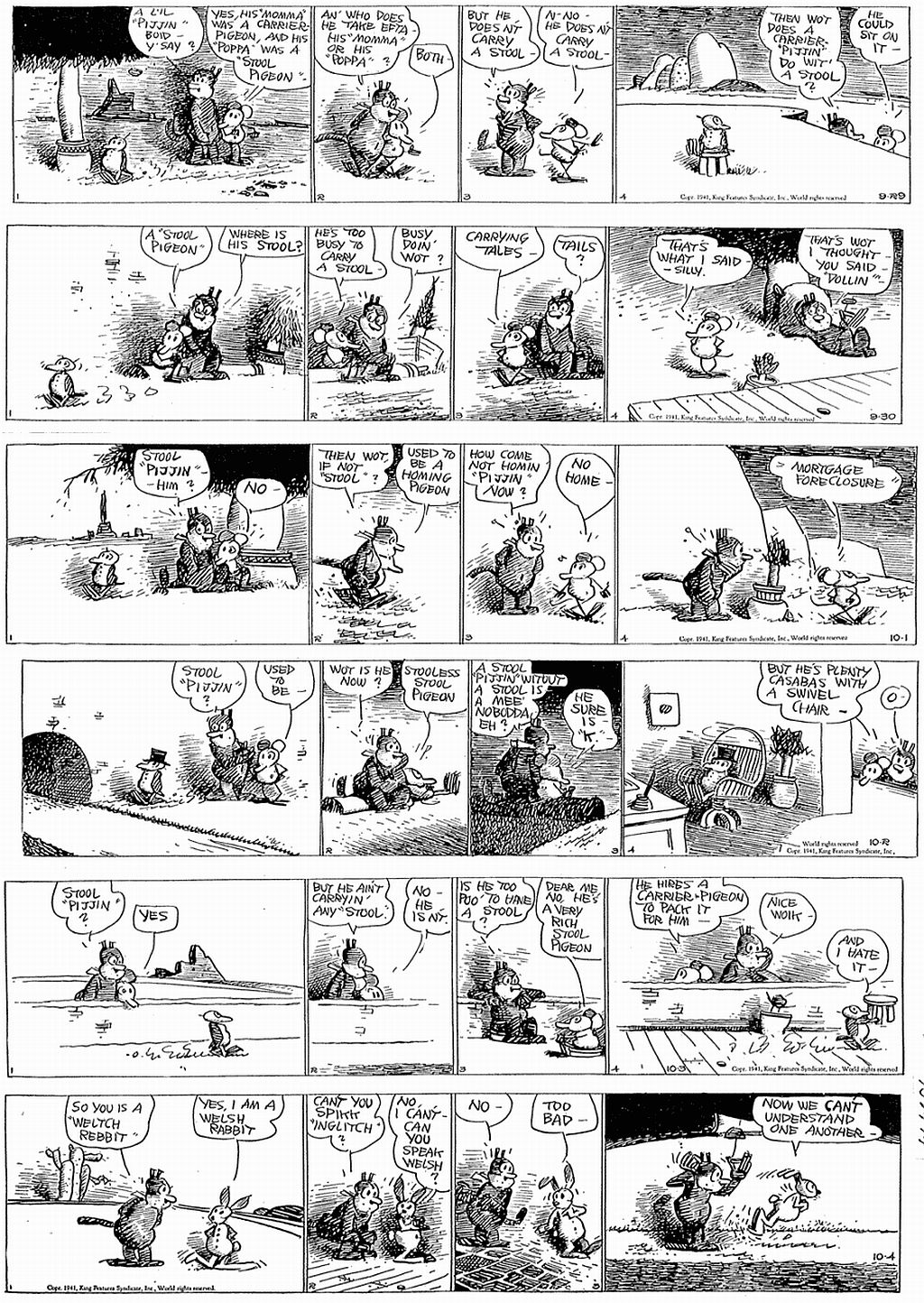 Â From 9-29 to 10-4-1941 comes Krazy Kat with a lot of pigeon jokes for the week. “Stool” pigeons, “Homin'” pigeons and Carrier pigeons have a hierarchy that Garge explores thoroughly, ending with a neat little “Welsh Rabbit” joke. Garge designed rabbits very well, this one could have been a recurring character, perhaps in tandem with a desert jackrabbit.

Felix is from 11-18 to 11-24-1935 this time out. He continues to elude the sailors by hiding in a bag, but is eventually flushed out and he surrenders his precious diamond under ether. Once again, he loses control of the peculiar oblong gem that propels the action into 1936. I love Felix’s crouched position in the 11-22 and 11-23 as he tries to hide the diamond by hunching up around it. He really looks pathetic. In the Sunday, Felix thinks he has a Thanksgiving Turkey dinner courtesy of the Professor, only to find that the Prof. just wants a turkey for two feathers to round out an Indian costume he’s making. Felix’s frustrated attitude in the last panel is quite funny as he searches for a fish dinner as he’s forced toÂ trade L-Triptophan for Omega 3’s.

Â Myrtle is from 6-23 to 6-28-1947. Dudley Fisher continues to produce great looking dailies. Freddie wears a sports shirt three times during the week, but only in the Saturday, 6-28, strip does a real gag come out of his change in wardrobe. Victor, a neighborhood boy, looks better in the sports “muscle” shirt than does Freddie, so he goes back to his long sleeve dress shirt. I also like the 6-26, whereÂ BingoÂ shows his true opinion of Mom’s taste in lamps; “You can’t fool a dog!”

Â Â Â  There’s a current class called “Blogging for Fun and Profit” offered over at the Glendale Community College right now. If it didn’t cost so much, I’d take it, simply to get ideas of how to “profit” from a Blog. I know all about the fun part. Have you visited Jerry Beck’s new and improved Cartoon Research blog? Here’s the link: http://cartoonresearch.com/. Jerry really works hard at his blog, posts every day, sometimes more than once. I like to put a post together every so often, but it’s hard to be dedicated to sitting in front of a screen for so many hours a day. See you soon. 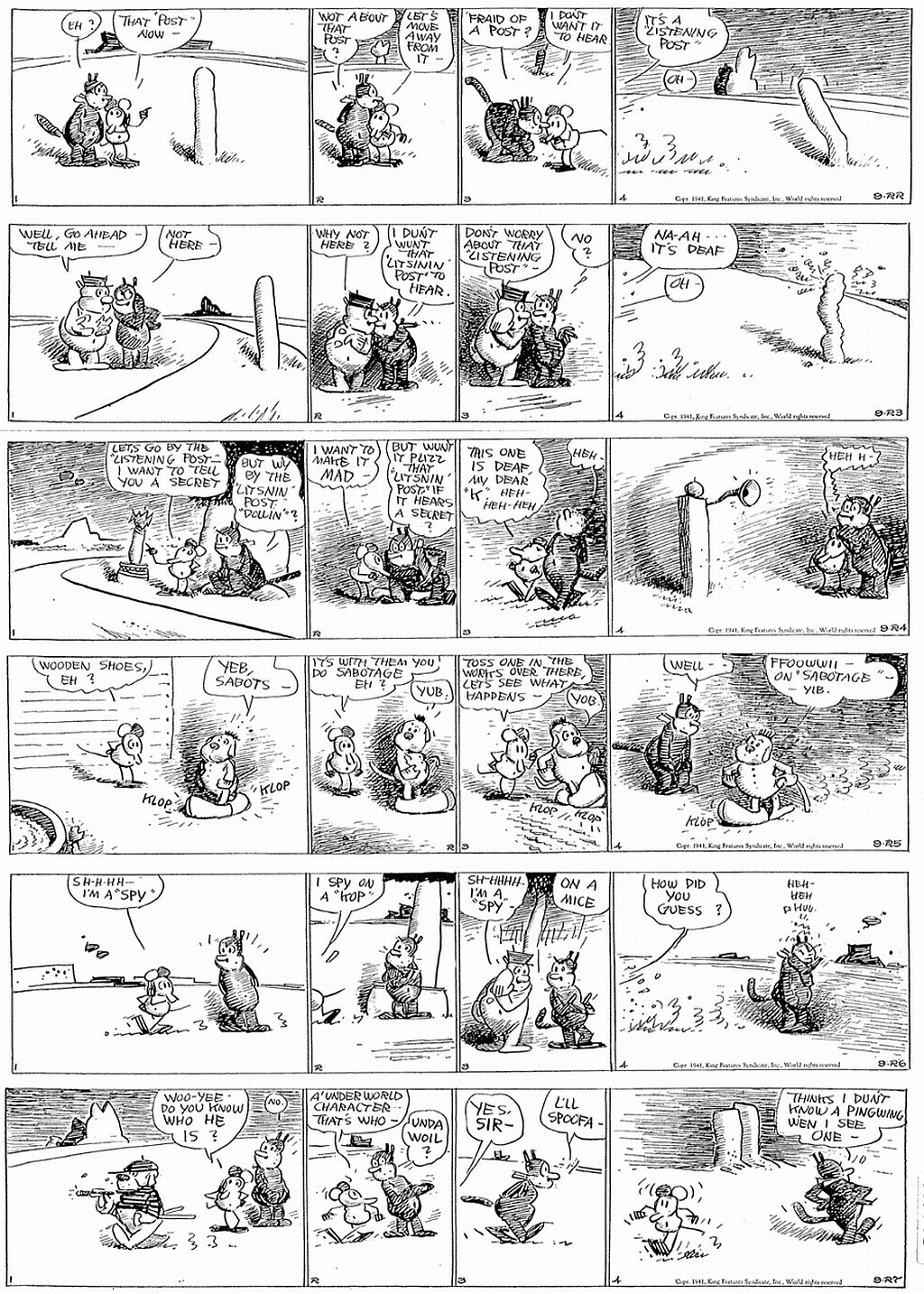 Â Our Kat this time is from 9-22 to 9-27-1941. Wartime consciousness begins to seep into Coconino County as there are three “listening post” gags,Â  and a saboteur dog who wears wooden shoes, but calls them “sabots”. Is he from Holland or France? Ignatz and Pupp refer to themselves as “spies” in the 9-26, and in the 9-27, Krazy’s convoluted logic lets him believe that an “underworld character” is a “pingwing” (penguin).

Â Felix is from 11-11 to 11-17-1935 and continues Felix’s adventures aboard Danny’s ship. He dives to the bottom of the sea to get the sailor’s pipes back to them, and the diamond becomes an ingredient in Wong’s stew. Felix hides in the Captain’s grip with the diamond, but the Captain locks him in. The “Silencer” machine continues to provide a continuing plot for the Sunday page. However, the Professor’s handy device makes robbingÂ his safe a little TOO handy for a thief.

Â Myrtle is from 6-16 to 6-21-1947. I like the gag in the 6-18, as Bingo the dog fakes out Freddie, and the 6-20, as the timely appearance of Myrtle’s boyfriend Sampson at the front door, galvanizes a reluctant Freddie into making vacation plans to get away from the lisping little creep.

“Stop That Crazy Bear!”Â I’m gonna get ahead of that sly dog, Yowp, this time. Here are the 1/3rd page versions of the Yogi Bear Sundays from March, 1963. I like the long panel with all the props that get attached to Yogi in the 3-3. I’ll bet Yogi watched a trapdoor spider emerge from his underground home in the original top row of the 3-31, as he refers to the spider in the last panel. That’s nice use of color in the 3-31, too, as Yogi is a shade of Cerulean Blue and Yellow-Green in his underground lair. These all look like Eisenbergs to me. Keep checking with Yowp’s site in the Blogroll, as he’ll probably be posting the half-page versions of these strips any day now! Yuk-yuk! 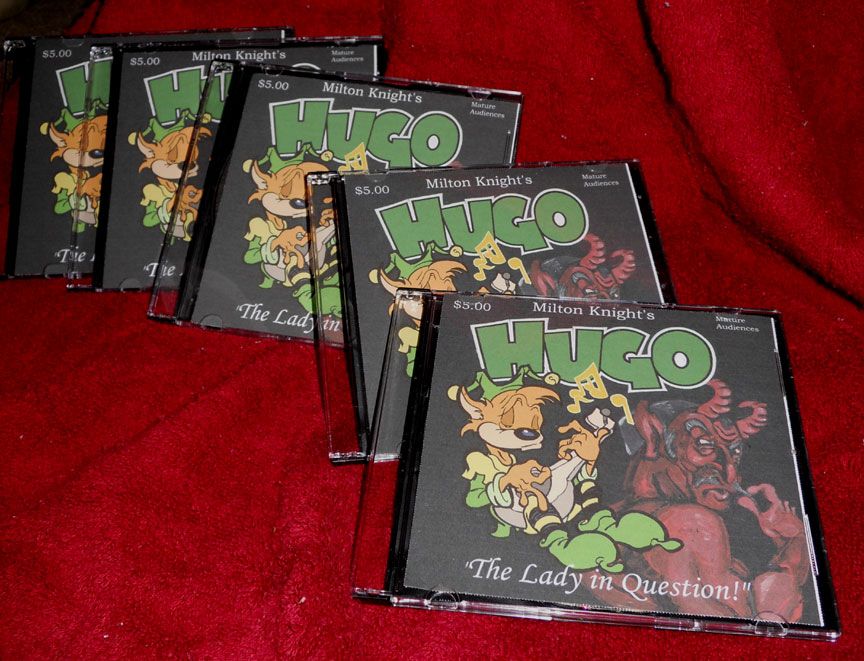 Â Here’s something else to click on the Blogroll for, Milton Knight’s “Hugo” in a brand-new story called “The Lady in Question”! This is the first Hugo comic not to be printed on paper, but burned into a CD-R disc. Get a preview at http://miltonknight.net/previews.html. You can probably order it through Milton’s website, which I directed you to visit a little earlier in this paragraph. No doubt it will contain Knight’s own unique blend of delicious dames and devils. It retails for a mere 5 bucks a copy. Tell him “Itza Cat” sent you!