All is illusory with Garge this week. In 9-2 and 9-3, he finishes off the eyeglasses idea he started with Offissa Pupp using phony specs to make himself look wide awake. This reminds me of the Tom and Jerry cartoon “Sleepy Time Tom”. Remember Tom painting pupils on his eyelids to fool Mammy into thinking he was alert? I’ll bet this gag has it’s roots in vaudeville. In 9-5 through 9-8-1938, Garge is anticipating Crockett Johnson (“Harold and the Purple Crayon”). What is the difference between a real brick and a brick drawn with a pencil in a pen and ink world? I love the gag in 9-8: Ignatz draws lines to indicate rain and then Krazy (offstage) draws an umbrella to shield himself from the ink-line raindrops. The fact that Krazy draws the umbrella for himself off-stage heightens the mystery, Garge is asking his readers to participate in the gag.

I shot the first take of Sc. 24 last Sunday, and it’s going to take at least two more passes to get it right. I have a few too many poses and ideas that don’t support the main idea of the shot. SoÂ  I have to take them out, re-time and revise. I still haven’t done the effects of Pearly (the cat’s object d’amour) crying. Cathy and I did get out to Monrovia, Ca. this week to paint a charming old neighborhood. Cathy drew with pencil this time, and I did two watercolors of Tudor style homes, with the San Gabriel mountains behind them. One of the paintings almost worked! I would love to get scans up of some of my paintings, maybe one day I can afford a good art quality scanner. Any experienced bloggers out there have any recommendations? Have a great Independence day week!

Here are the KKs from 8-26 to 9-1-1938. The finish of the wall sequence from last post and a new character: “Mr. Beaver”.Â  Mr. Beaver’s tail makes a good comic prop in 8-31 and 9-1, serving as bothÂ defense of Krazy’s bean and offense on Offisa Pupp’s noggin. There’s the “cobble rock” again in 9-1, note the beautiful shading in the last panel. I like Krazy’s “stend-in” inÂ 8-30, is he a dog or a cat? I have been working on Sc. 24 most of this week, am almost ready for the first test of the scene. I will have another pass to add the effects once the characters are moving well. When I spend a long time animating a scene, this time months, I sometimes don’t want to see a test. I’m afraidÂ that the scene in “real time” won’t live up to my expectations. If it doesn’t, there’s a lot more work to do until it does. At least full animation is relatively easy to shoot, it’s limited stuff that’s hard, with it’s muti-levels of seperate mouths, heads, arms, cycles, etc. It used to be quite a job of book-keeping doing limited TV stuff.Â  Flash animation looks about as complicated, level-wise, except now they call it “layers”.Â  Once again, no painting this week, maybe next if the Lord allows. Don’t miss Allen Holtz’s “Strippers Blog” for the 1906 Herriman political cartoons. In those days, all the guys dressed in black and looked like the villain in “The Drunkard”, at least that’s the way Garge drew ’em. The link to Allen’s page is on this blog.

Some More for you Ailurophiles out there 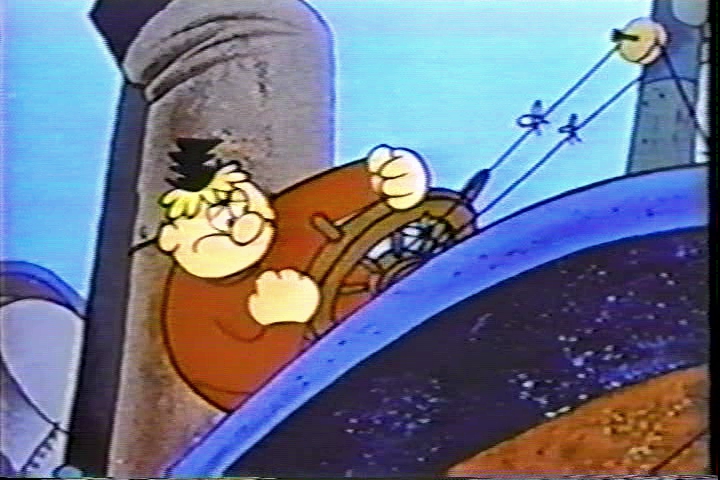 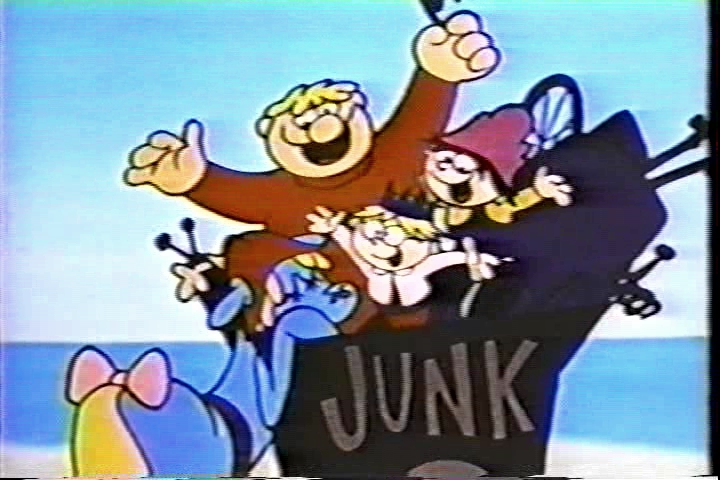 Okay folks, here’s the strips from 8-19 to 8-25-1938. In 8-23, Herriman uses a gag and concept that he went back to several times: Krazy feels naked without the neck ribbon! Also the ringing brick storyline from last weeks concludes and a new one starts with K and I standing behind a wall. 8-22 is kind of obscure, looks like Joe Stork scared himself away! Looks like he can dish (the kids) out, but he can’t take ’em! It’s been a quiet week, animated about another two feet of Sc. 24, didn’t do any plein air painting, sob! Thanks to Milton Knight, I got to see a Gene Deitch “Samson Scrap” cartoon. It’s called “Old Tin-Sides” from 1962. (See stills at top.)Â It is a sequel to the first in the series called “Samson Scrap”, released as a Paramount Modern Madcap in 1962. “Old Tin-Sides” makes fun of the U.S. military, in a “Munro-esque” fashion. Samson sounds and acts a lot like Clint Clobber, Dayton Allen did Samson’s voice. In 1962, I saw the original Samson Scrap cartoon in a movie theater in Steamboat Springs, Colorado. Our family car broke down there after a trip to California! My mother, my brother and I were stuck there for more than a week, while Dad went in search of parts for the car (there were none to be had in Steamboat Springs). Samson made a big impression on me, as I loved Tom Terrific, and recognized Gene Deitch’s credit. Were there any “Sampson Scrap” comic books? Make sure you see the “Stripper’s Guide” blog for the Herriman editorial cartoons from 1906!

In the strips from 8-12-38 to 8-18, we have the finish of Krazy’s canoe, and the beginning of “Pupp’s Glue” storyline. What is a “kobble rock” anyway? That’s what I call those little porous rocks in the bottom of our bar-b-q pit, but that may not be correct. I am still working on Sc. 24 of the new cat cartoon, did about three feet this week. Cathy and I went to the Rubel farms on Thursday out in Glendora, for our painting group’s weekly outing. Mike Rubel, whose dad was Heinz Rubel, is the owner of the “farm”. It’s a great place, with a castle built of big stones and rocks, many odd-sized apartments for rent, with a big clock tower that chimes on the hour and half-hour;Â  works imported from England. Mike is a train buff, and has a full-sized Santa Fe caboose on the property which we painted “en plein air”. There are many rooms throughout the estate, one is called the “tin palace”. It contains some nice H.O. scale miniature trains, and many books and display cases about Mike’s family history. His dad Heinz, under the name “Hal Raynor” wrote for Joe Penner’s “Baker’s Broadcast” radio show in the early thirties, writing the songs that Joe sang every week. The articles on display in the tin palace even give Heinz Rubel credit for the line: “You wanna buy a duck?” My personal theory is that the popularity of Joe and his duck, Goo-Goo, laid the comedy tracks for the funny ducks of the cartoons: Donald and Daffy. Mel Blanc even claimed that he did Goo-Goo’s voice on Joe’s radio show. However, none of the existing Penner shows has Mel doing the duck’s voice. It’s sad that there are onlyÂ eight Penner Baker’s BroadcastÂ shows that survive today, the earliest being from 5/13/1934. A study of the “Baker’s Broadcast” show is essential for a student of 1930s comedy, which is certainly a big part of the humor of the animated cartoon. Heinz RubelÂ was one of the writers of this seminal program, with it’s blend of crazy puns, non-sequiters and slapstick.Â At one point, Heinz Rubel was an ordained minister, with his own church. It could have been the church of Goo-Goo! In the tin palace there are also artifacts from Heinz’s ministarial days in a display case. Mike Rubel, who built this incredible castle mostly by himself, can no longer walk and doesn’t live on the property anymore. Cathy and I used to come to the Rubel farms to paint years ago, and at that time Mike was walking around and greeting people in his farm outfit, denim overalls and an engineer’s hat. Mike used to hold court on one of the balconies of the castle and a bunch of Glendora good ol’ boys would get together for iced tea and “train talk”. Mike’s collection of roosters, hens and horses still roam about the estate; the crowing and whinniing keeps you awake! The Rubel farms are a great eccentric treasure of Glendora, and are available for tours, if any of you are interested. It’s worth seeing and there are a lot of subjects to paint and draw! Mike also collected lots of old cars and farm machinery, some of the walls of the castle are made up of old bottles set into the concrete. I’m looking forward to our next visit.

In this series of strips from 8-5 to 8-11-1938, the boll weevil and moth story concludes with both of Krazy’s hats devoured. Then Krazy has some trouble distinguishing a canoe from a boat. I like the poignancy of Offissa Pupp in 8-11, standing on the bank saying “Goodbye, Sailor, Sail far, Sail Wide, Sail On…”. Then Garge reveals the inevitable gag in the last panel,Â deflating Pupp’s poetic send-off.Â  Today, I actually got to record a tandem commentary with Leonard Maltin for another Oswald cartoon. I think we had a good time doing it. Then I did an interview on camera for the third volume of THE CHRONOLOGICAL DONALD. We talked about Donald’s treatment by the studio as a “star”. IÂ won’t go into any more detail then that, but buy or rent the DVDs and find out. It was great working with Leonard, I’ve been corresponding with him since I was a kid. I wrote the first version of my Film Comment Tom and Jerry article for Leonard’s Film FanÂ Monthly when I was 12 or 13. Do any of you get his “Movie Crazy” newsletter? I always enjoy reading it. He has a thoughtful article in the current one about how he discovered silent comedy through his exposure to early television and talks about how silent comics such as Snub Pollard and Andy Clyde were given extended leases on their careers by television. The photo gallery on Andy Clyde is worth seeing,Â Andy was certainly a master of makeup! See you all next week.