Happy New Year, everybody! As we ring out the old one, let’s welcome the new year with some old comic strips. Here is Barker Bill from 11-15 to Sunday, 11-28-1954. The first six dailies were sent to me by Yowp and were culled from the Winnipeg Free Press. The second batch of six dailies and the Sunday page are by courtesy of the Glendale Public Library and the ProQuest collection of the Boston Globe. Barker Bill and Puddy try to exhibit the money-eating Gelt as a circus attraction, but he literally eats up all the profits. The Sunday page from 11-28 was the earliest one that the Boston Globe carried, featuring Ironhead the Invincible. The Globe ran Barker Bill for only about 6 months and used the Sunday page infrequently, but it’s a revelation to me that Barker Bill even HAD a Sunday page. I have no idea if this is the firstÂ Sunday or not, perhaps one of my readers can fill us in.

Felix (from 4-29 to 5-5-1935) continues the “Ape” saga, as Danny notices that Felix has been catnapped and pursues the Ape to the island, only to be caught himself. The Sunday page continues the adventures of Felix in Dreamland, using lots of cherce puns as Felix uses doughnuts and playing cards (“When it comes to gliding, I’m an ace!”) to elude the Giant. I like the gag in the “Laura” topperÂ as the hapless parrot sings “I Cover the Waterfront” to a corpulent lady bather.

In Krazy (3-10 to 3-15-1941) the handsome Don Jose Kiyoti cuts a wide swath through the women of Coconino. He flirts with Krazy, Mrs. Ignatz Mouse and Mimi, the Poodle. The Don hides under Mimi’s table in the 3-15, after all, she’s the lady nearest in size to the “Dawn”. 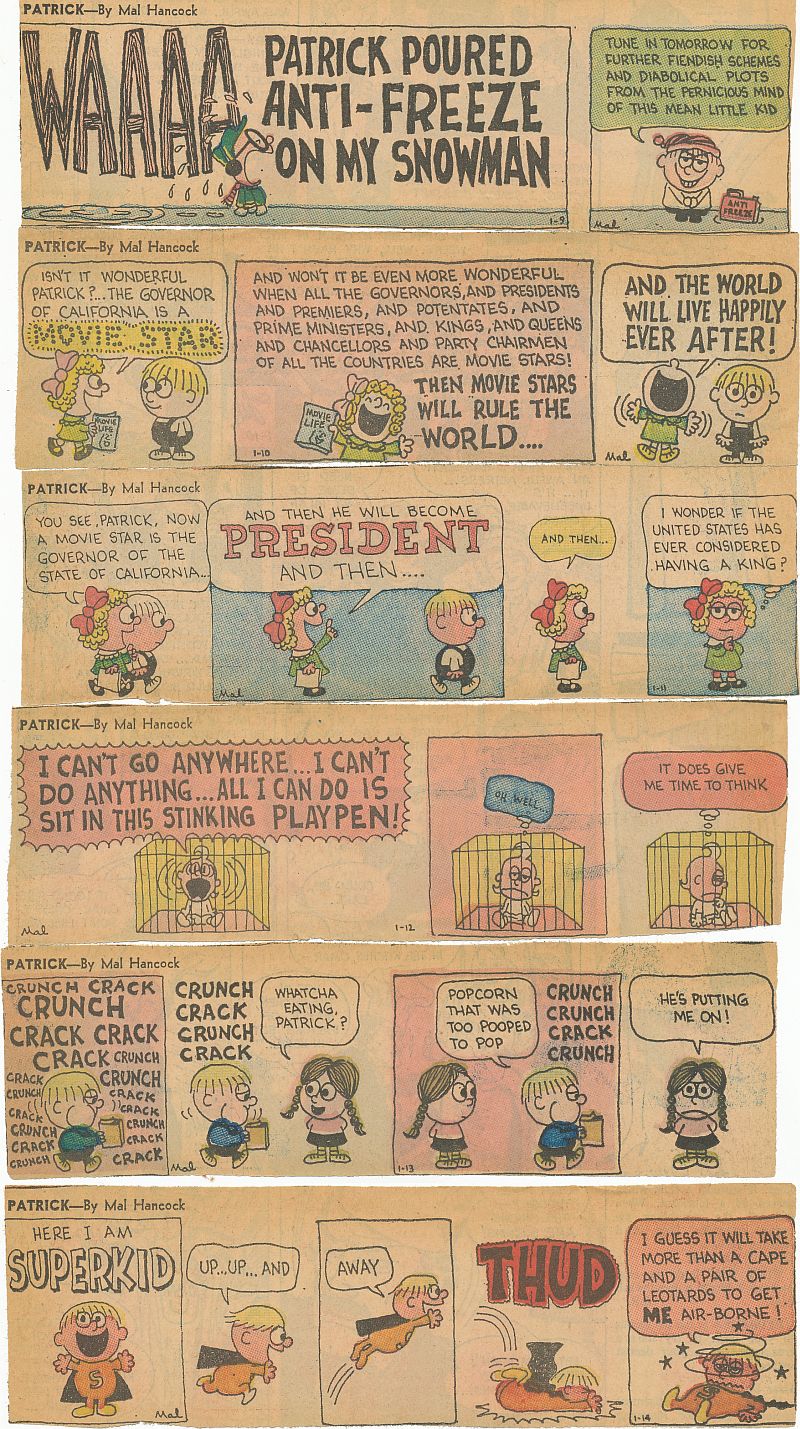 In Patrick (1-9 to 1-15-1967), Elsa predicts the future in the 1-11 strip. Ronald Reagan became the Governor of California in 1966, and won the Presidency in 1980. It might have seemed silly and funny that a little star-struck girl was wowed by a MOVIE STAR as Governor in 1967, but she was certainly accurate in anticipating what would happen to that STAR. In the 1-15, we have the first appearance of Patrick’s alter ego: “Superkid”. Over the next few months, you’ll see Patrick use and abuse that alias. A little side note, I was attending the Kansas City Art Institute in 1967 and had no access to the St. Louis Post-Dispatch, so my “kid brother”, Kurt, was kind enough to clip these strips for me, and ultimately, you! We all owe him big time. It’s been another year of hopes and delayed hopes, let’s give several Elmer Blurt imitations for 2012. See you then. 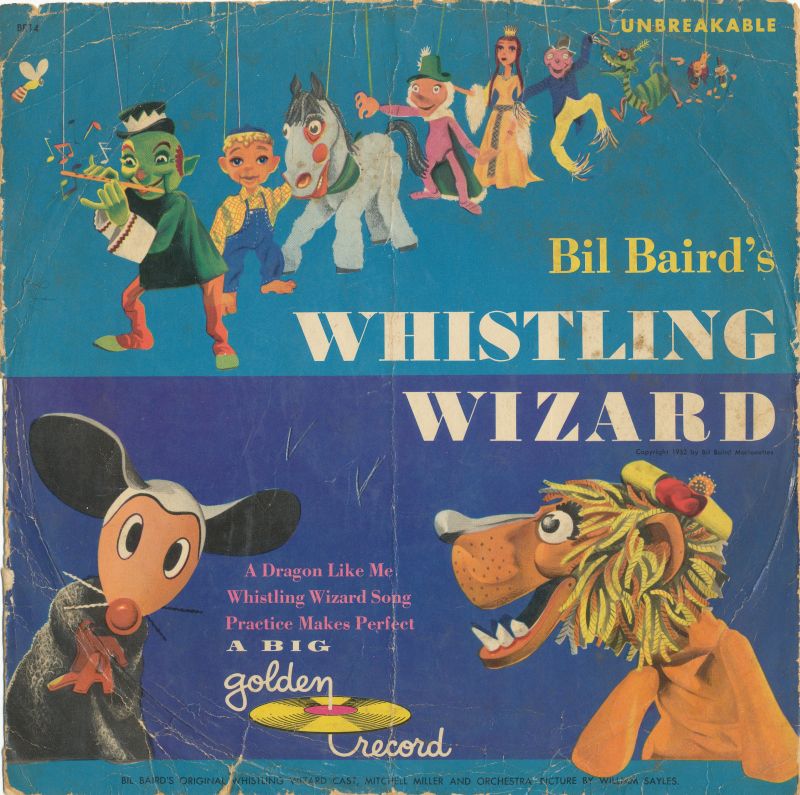 Â Merry Christmas, Happy Chanukah to all my readers! The record cover pictured here is one of those childhood memories that refuse to leave the brain. The song “Practice Makes Perfect”, on side two, sung by Bil Baird as The Dooley, pops into my mind almost every week, mostly unbidden. If you listen to the record: www.archive.org/details/TheWhistlingWizardGoldenRecord, you will hear Practice Makes Perfect about half-way in, the record runs six minutes. Please excuse the hum in the background, as this was recorded off Cathy’s old turntable at 78RPM. My mother must have bought this record for me when I was two or three years old. She probably sang “Practice Makes Perfect” along with the record to encourage me to practice the piano. In those days I had a little 78 phonograph that was shaped like a tall cylinder with stars on the side of it, and with a rather large tone arm that probably damaged the records asÂ I played them. I loved repetition, and literally played most of my records to death. Thanks to Ebay, I found a beat-up, but still playable copy, and the memories came flooding back. I remembered “Practice Makes Perfect” as a lot more shrill and silly than it is here, but the melody and most of the lyrics are the same as I remember. The shrill overtones that I thought were on there might have come from the tinny little amplifier of the old Star sided record player. “The Whistling Wizard” was one of the few Big Golden Records releases, most Golden Records were little. It featured the cast of the first color television series, broadcast on CBS in 1951. The color system used, “field sequential”, was cumbersome and ultimately not adopted for regular telecasts. There don’t seem to be any kinescopes available of the show, certainly none in color, and I can’t remember if I ever saw it broadcast or not.Â  I loved Bil Baird’s marionette and hand puppet designs, especially Heathcliff the horse and Charlemagne, the lion. Charlemagne later on morphed into Champy the Lion, who starred on the old Wheaties TV commercials from 1956. Baird’s puppets looked like a combination of Tony Sarg (Bil’s mentor) and Eastern European puppet design. Baird’s first show before “Wizard”, was “Life With Snarky Parker” directed by Yul Brynner. Heathcliff the talking horse was a holdover from Snarky’s show. Baird was a big deal on TV in the mid-1950s before the puppet world was eclipsed by Jim Henson’s Muppet designs.Â Baird did a couple of specials with Art Carney, one of which was “Art Carney Meets Peter and the Wolf”. Copies are available of that one, and the marionette work was impressive, especially the wolf. Carney really entered the spirit of the story and made the puppets seem even more alive by his very warm relationship with them. Look around on You Tube for it.

A while ago, I experimented with reading Dorothy Parker and other stories aloud, and making them available on the blog. They weren’t too popular, maybe I’m not much of a reader, but here’s a “Christmas Leftover” that I’m handing out, Chapter 24 of Felix Salten’s “Bambi”. In Salten’s original, Bambi does not live happily ever after with Faline, and the old Stag is almost at the end of his life. Bambi’s father takes Bambi to a lonely place in the forest where a man has died as the result of a shooting accident. As he observes the bleeding corpse, Bambi learns that man is not all-powerful, as many of the animals believed, but vulnerable, and capable of being killed like all the other creatures of Earth. This idea isn’t featured in the Disney cartoon; Salten’s story is quite a lot darker. If you care to hear me read it: www.archive.org/details/BambiChapter24ReadByMarkKausler. Click over to Archive.org and listen. It runs 7.40Â minutes or so.

Â Barker Bill from 11-1 to 11-13-1954, comes to us by courtesy of Yowp, remember to click on the Blogroll to your right to access his two fine blogs, Yowp and Tralfaz. Bill discovers the Gelt from the African Veldt in the beginning of the story that I started two posts ago with greatly inferior copies of the strips. The missing episodes are now filled in, and we will continue the money-eating Gelt’s adventures next post.

Â Felix, from 4-22 to 4-28-1935, is hauled away to the Ape’s den. Felix makes his escape from the den, and is picked up by Danny and the ship’s crew. In a silhouette panel that reminds me of the movie “King Kong”, the Ape sneaks aboard ship in the 4-27, and takes Felix to his den once more. In the Sunday, Felix is still in Dreamland, and escapes from the Giant by bouncing away with the help of the eraser end of a giant pencil!

Â Krazy, from 3-3 to 3-8-41, features one storyline for the week: “The Duel”. Don Kiyoti encourages Offissa Pupp to fight a duel with Ignatz after IgnatzÂ defiantlyÂ snaps his fingers at the Pupp. Don Kiyoti serves as Pupp’s second and Ignatz’s wife and kids serve as the Mouse’s seconds, thirds, fourths and fifths. The duel ends in a brick toss which misses Offissa Pupp and hits….should I tell you? 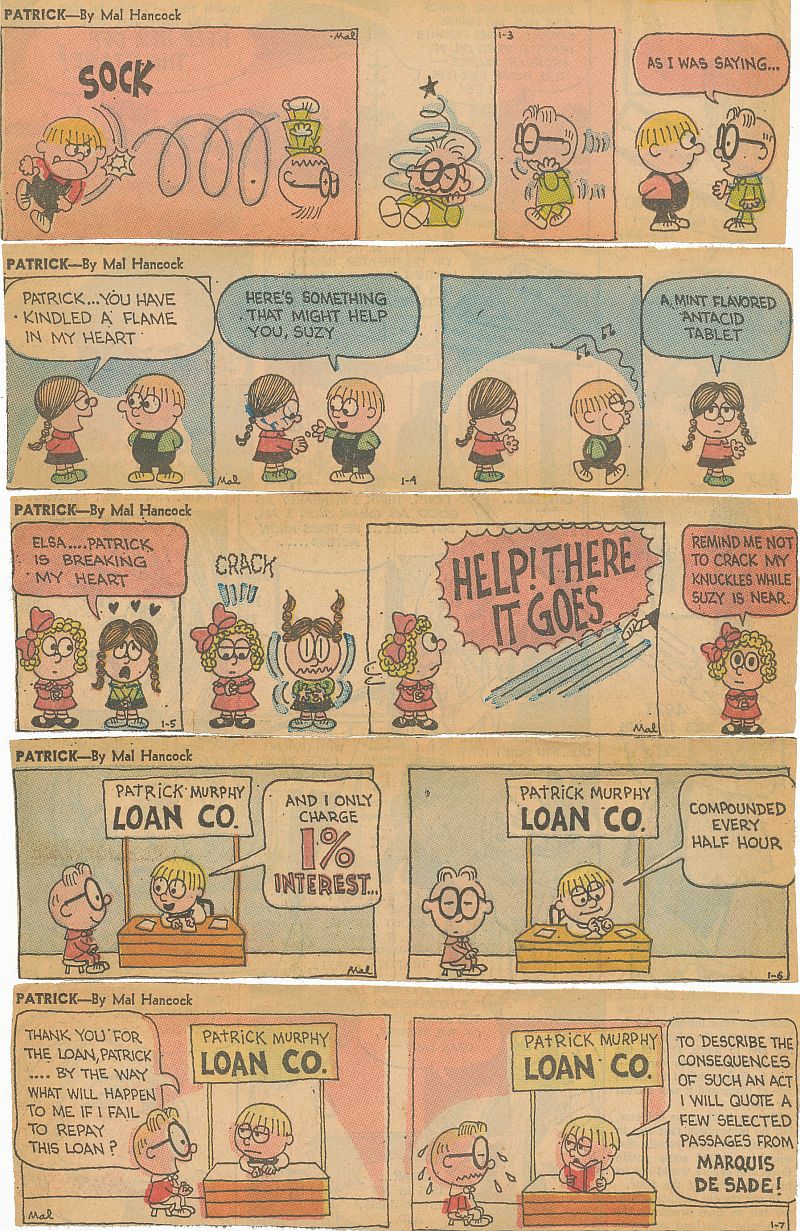 Â Patrick, from 1-3 to 1-7-1967, really has a Schulz flavor this time. Elsa and Suzie’s antics in the 1-5 remind me of Violet and Patty, if a bit more manic, and Patrick’s loan company reminds me of Lucy’s Psychiatry Booth, and even more of Skippy’s various businesses in the 1930s. I don’t remember if Skippy threatened Marquis de Sade tactics on his clients, but maybe Percy Crosby didn’t think Skippy should be that precocious. Stay away from undercooked Christmas Goose folks, and recycle your wrapping paper. We’ll see you again after Ol’ Sam Nicholas has returned to the Toy Factory.

Â Thanks to Yowp, who downloaded these strips, here are the Barker Bill dailies from 10-18 to 10-30-1954. In the last blog post,Â during the 10-8-54 strip,Â Barker BillÂ Â speculated about Dog Biscuit’s resemblance to a TV personality. That would have to be Dave Garroway, who was known for his big smile and dark, horn rimmed glasses. Dave was the host of NBC’s Today show from 1954 to 1961, so this would have been during his heyday. In these strips, Dog Biscuit the horse, breaks his glasses and loses the race, upping the odds on Glue Foot, the slowest horse. Glue Foot wins, and “Longshot Louie” pays off to Barker Bill!

Â Felix, from 4-15 to 4-21-1935 continues his adventures on the tropical island. Felix has to babysit the big ape’s little ones, but the ship is not far behind and spots birds flying toward the island. Will Felix be rescued? In the Sunday, Felix continues to stick to Dreamland, and rescues a little fly with the help of the Giant’s glasses.

Â In the strips from 2-24 to 2-19-1941, Krazy casts his bread upon the waters, and Ignatz gets away with a brick toss during Offissa Pupp’s “see no evil” routine. Ignatz spends time in Jail and razzes Pupp in the 2-29. 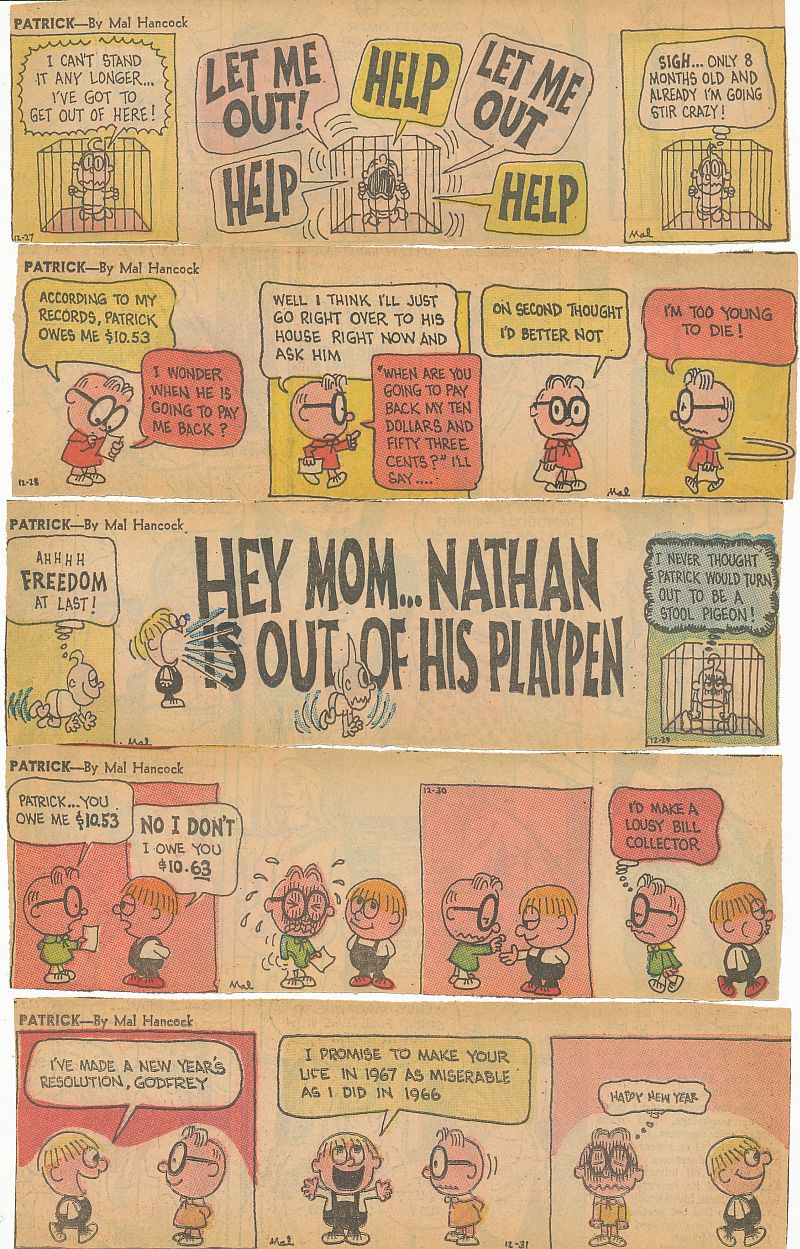 Scanned off my collection of clipped Yogi Sunday pages from the St. Louis Post Dispatch, are the December, 1961 strips. Go over to Yowp’s website and read his notes on them, then kindly come back here, click to enlarge,Â and read them in color and mostly half-page size (the 12-3 is only third-page).

Patrick this time, finishes off the strips from 1966, 12-27 to 12-31. Nathan is going stir crazy, and Patrick tricks Godfrey out of a dime at the same time that Godfrey tries to collect $10.53 from Patrick. Patrick promises that Godfrey’s new year will be as miserable as 1966 was in the 12-31. The Post-Dispatch did not publish on Jan. 1st, 1967, so the next Patricks will start with the 1-3-67. I hope to do a special Christmas post next time.