John Sparey on “The Funny Company”, and the end of 1936 Felix 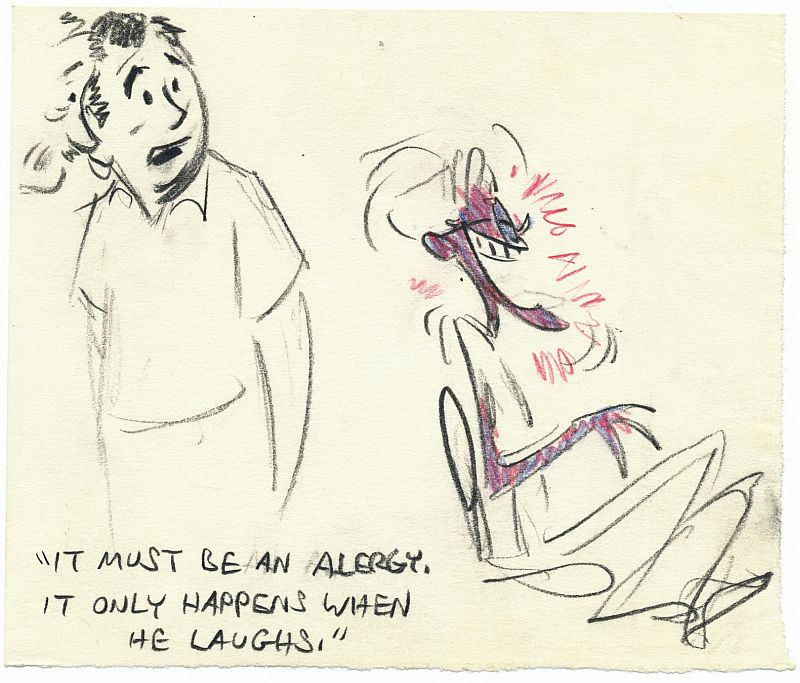 Hi Readers, here is another 1969 John Sparey gag cartoon about my crazy laughter. That’s John and Mike Sanger to the left of the panel. Sometimes I’d get to laughing so hard that I would literally turn purple, and that’s what John is commenting on here. Actually, in laughing that hard, I would feel so embarrassed that I would blush at the same time I laughed. I still have a complex about blushing today, it’s just not “macho”, muchachos! Here is the text of a letter that John wrote to me in 2001. He remembers the heady freelance days of the 1960s when he worked for TV Spots and Sam Nicholson. He gets into some pretty technical talk about camera mechanics, but I feel that those “in the know” will be amused by it, and everybody else skip to the comics! Here it is:

I generally hole up in my apartment on Sundays to take care of accumulated bills and correspondence (dated for the outgoing mail on Monday). (Mark here: I think that John lived either with his mother or by himself most of his life.) Although Lee Mishkin joined TV Spots (later Creston) during my time there, I cannot recall actually working on any of the same pictures with him. I tend to associate him with the “Fractured Fairy Tales” there, and chances are that he was on “Calvin and the Colonel”. He seemed pleasant enough and I liked his personal cartoon style of the time, but layout and animation tended to maintain separate cliques. As head of layout, Norm Gottfredson seemed to look down on animation as a necessary evil. (Mark here: I think that Norm felt about the same way when I met him at Fred Calvert’s studio in 1968.) But to me, he couldnâ€™t draw a character the same way in two consecutive layouts. I felt that his heritage from his father consisted primarily of his strikingly similar build and the family name. His childish drawing style seemed a precursor to the prevalent styles today. I had little contact with Lee, and since that time have only seen him on rare social occasions.

As for “Linus the Lionhearted”, I donâ€™t know where to start digging to find my TV cartoon references to see where that was animated. At TV Spots, we had the first season of “The King and Odie” (AKA “King Leonardo and His Short Subjects”). Shull Bonsall must have underbid the Mexicans for that one.

After Creston closed, and a year on “The Man From Button Willow”, came a year with Sam Nicholson on “The Funny Company”. He was then located at the animation center on Homewood, south of the Cinerama Dome. Libby Simonâ€™s mother was a partner in a cel service in the same building. They worked on “T.F.C.”. Jerry Nevius rented a studio there, and while we were there, he hired Bill Littlejohn to work with him on the first Tiger Paws commercial. But then Bill got all the following Tiger Paws spots. And Chuck Jones set up there before moving to Tower 12. (But that must have been a later time.) Bob Bemiller and I rented space there to work on “Funny Co.”. He provided the desks. That was my only job on which I could deduct business expenses. We were the entire animation staff, working on separate episodes. I never saw who did storyboards or layouts. (Iâ€™m not sure we had layouts.) Dave Hoffman worked in Samâ€™s office doing animation checking. I donâ€™t recall who did backgrounds.

The show had less than a shoestring budget. In one shot, I had Belli LagoonaÂ (Mark here: Belli Lagoona was the Bela Lugosi type villain of the series.)Â peering out from behind a pier piling. I gave him two dialogue positions with one inbetween. When we saw it on screen, Belli did an odd hop between lines. The man from Mattel (which bartered the show) turned quizzically and almost asked something. But he held his tongue. The scene aired that way. I tracked down the cels and drawings and found that it (the inbetween) was inked with the drawing resting against the pegs and then was registered to the B.G. (Mark here: In other words, the drawing was not on the pegs when it was inked.)

In another episode, a British chap had a held body and separate head positions. To avoid bad registrations, the head was exposed on a level below the body, with the neck painted generously below the collar line. So it was shot with the head on top of the body and the flesh color slopping down over the shirt. I was glad it wasnâ€™t one of my shows. It aired that way.

I had another shot of Belli screaming as the plane he was flying headed right at camera. Limited to a 12F setup, and with no copier or enlargement facilities, I used a center to center truck from a 12F to a 4F, one field at a time. Then enlarging what would have been a 3Fâ€“using the squares method of enlargementâ€”and trucking from 12F to 4F in half as many frames as before, then enlarging the 2F and trucking in about 2 frames. Then I had to go onto ones until the screen was the black of Belliâ€™s mouth interior. It was hardly the worldâ€™s smoothest continuing truck, but it matched the product.

I donâ€™t see myself enjoying the Smokehouse packed mostly with strangers, but thanks for asking. (I think I tried to invite John to lunch at The Smoke House, a North Hollywood eatery on Caheunga Blvd., but can’t remember why.)

Turning out a 3 minute animated film in this day and age seems a rather masochistic project. Who gets to see it? But if “Itâ€™s â€˜The Catâ€™” is ever released for the public, please let me know. I canâ€™t see it on the Internet, I donâ€™t have room for a computer.

I think it’s rather funny that John thought I was a masochist for making “It’s ‘The Cat'”, maybe he was right! The second short still has not gone before the cameras as yet, but ol’ masochistic me still lives in hope that it will happen soon!

Felix is from 5-11 to 5-17-1936 this time with a copy of the daily for 5-20 thrown in. Snobbs the butler comes to the fore as Felix’s menace this week. Socky McSwat, the bodyguard appears for the first time in the 5-13, and keeps beating up Snobbs. The Sunday, has Snobbs believing that Felix is a jinx, then loving him after Felix causes Snobbs to lose ten pounds. Unfortunately, I still haven’t found the Felix dailies for 5-18 and 5-19-1936. If I find them, or one of my readers could send them to me, I would be very grateful. If you now go to the post for August 15th, 2009, you may read the entire Felix year of 1936 minus the two dailies. Next time, we will still have Felix with us, but fromÂ a different year.

Krazy is from 10-28 to 11-2-1940 this time. Bricks and Jails take a big part of the gags, and a tourist drops in on 11-1 and gets the grand Coconino tour from Ignatz and Offissa Pupp. I wonder if any enterprising souls ever considered building a real adobe “Jail” near the Navajo Tribal Park in Monument Valley, with Herriman artifacts inside? Garge fans from all over the world would come there, I betcha. By the way, what does Ignatz mean by “Kay Fotchi” in the 10-31? 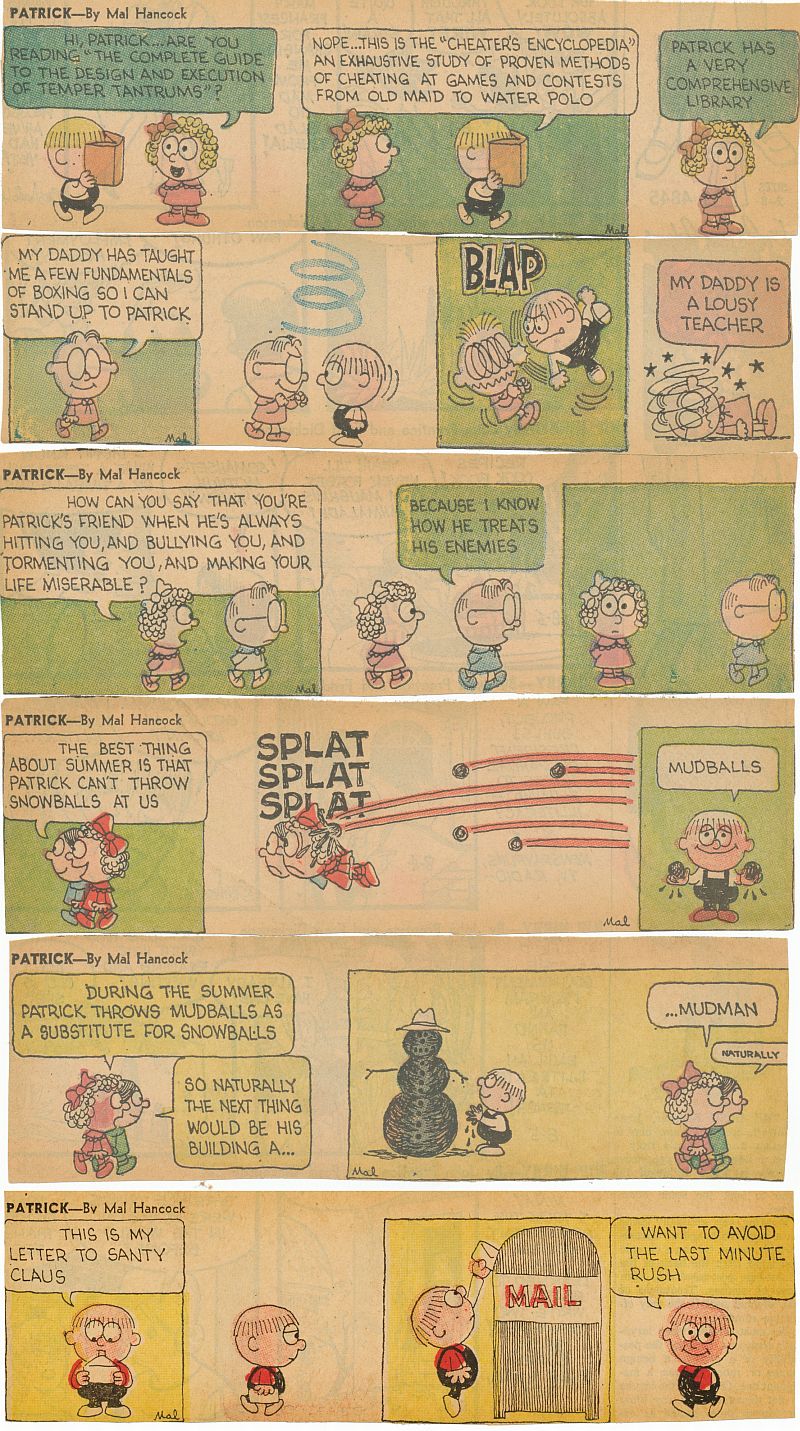 Patrick is from 8-1 to 8-6-1966 this time. My favorite gag is the 8-3, as Godfrey explains to Elsa why he remains Patrick’s friend, even though Patrick is abusive. This kind of gag shows that Patrick’s mystique is growing, he is a potent character even when offstage. The last strip remember is from August 6th, exposing the depth of Patrick’s greed. More of Patrick from the St. Louis Post-Dispatch next time.