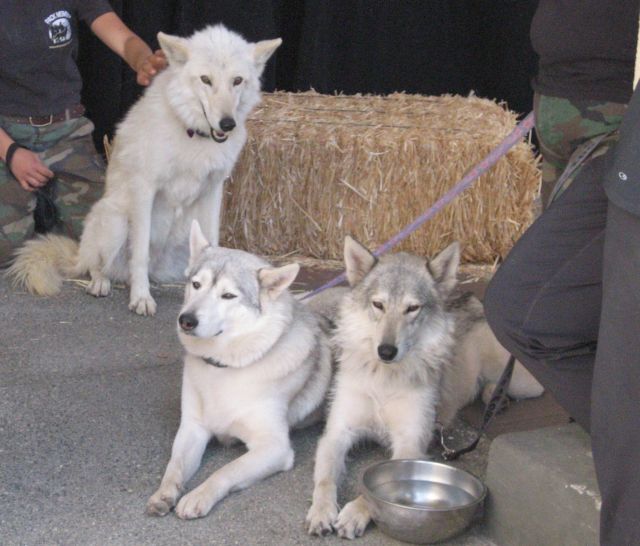 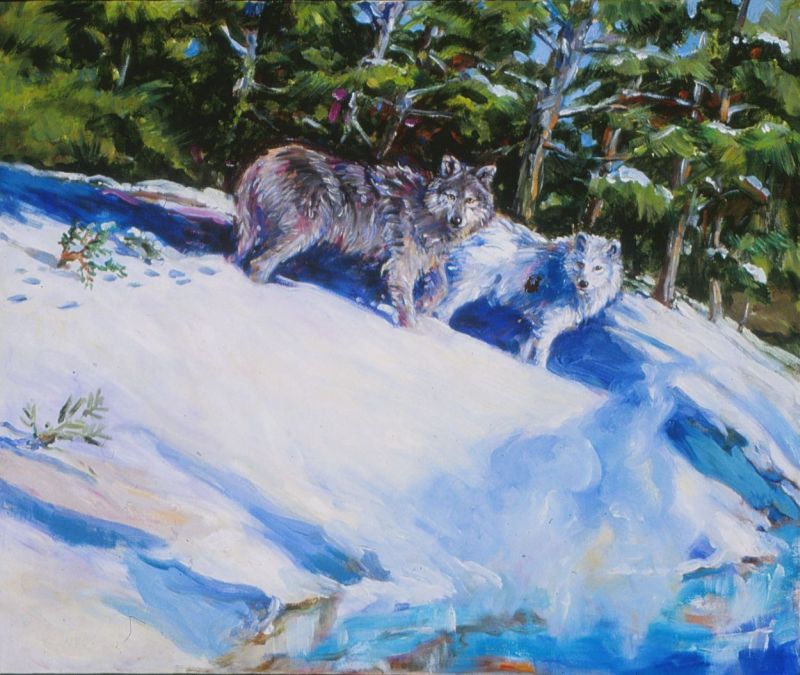 Cathy and I visited the Wolf Creek Tavern in Valencia last Saturday, not to indulge in beer, but to see a live wolf and wolf-dogs! They were supplied by the organization www.wolfconnection.org. The purpose of the group is to foster more appreciation of the animals by making it possible for the public to interact with them. One of the animals was a genuine Alaskan She-Wolf, that’s the thinner white wolf in the top photo on the upper left, and the rest of the critters were Wolf-Dogs, a cross-breed. They were all very friendly, and seemed to enjoy being petted. They liked to lick the faces of the folks who paid 8 bucks apiece for the privilege of being snapped (not bitten, but photographed) by the Wolf Connection group. I’ve also displayed one of Cathy’s oil paintings featuring wolves in Yellowstone National Park, called “Mates For Life”.Â In touching the wolves, we were surprised at how wiry their coats were, not like domestic dogs at all. The Alaskan wolf has a sort of “wild” look in her yellow eyes, the pupils were vertical slits, while the Wolf-Dogs had more “domestic” eyes, pupils were wider, and they squinted their eyes a lot. Click on the link to find out when Wolf Connection’s next event will be, and on the pictures to see the Wolves and Cathy’s painting larger.

Felix (9/28 to 10/4/36) in the dailies is trying to return the handbag thatÂ he fished out of the drink last time. The tramp tries to get it from him, but Felix finally gets the bag to a shrewish woman who clobbers him with a rolling pin. Her husband perceives that Felix “took the rap” for him and actually treats him to a “quart of cream” at the local greasy spoon. In the 10/4 Sunday, Felix stays with the Dud family for another week and dries Mrs. Dud’s laundry for her. She says what all of us Felix fanciers feel: “What would I do without Felix the Cat?” It’s Felix appreciation week!

The Krazys this time (3/18 to 3/23/1940) are mostly about sleep-walking, with a road-runner appearing in the 3/18. I love the sleeping brick in the 3/19. There is a sleep-traveller going to Chilchinbito, Arizona in the 3/23, it is not far from Kayenta and Canyon de Chelly. As of the year 2000, less than 500 people lived there, mostly Navajo. There do not seem to be any paved roads going into the town. I wonder if Garge rode there on horseback when he used to visit Coconino County so many years ago. 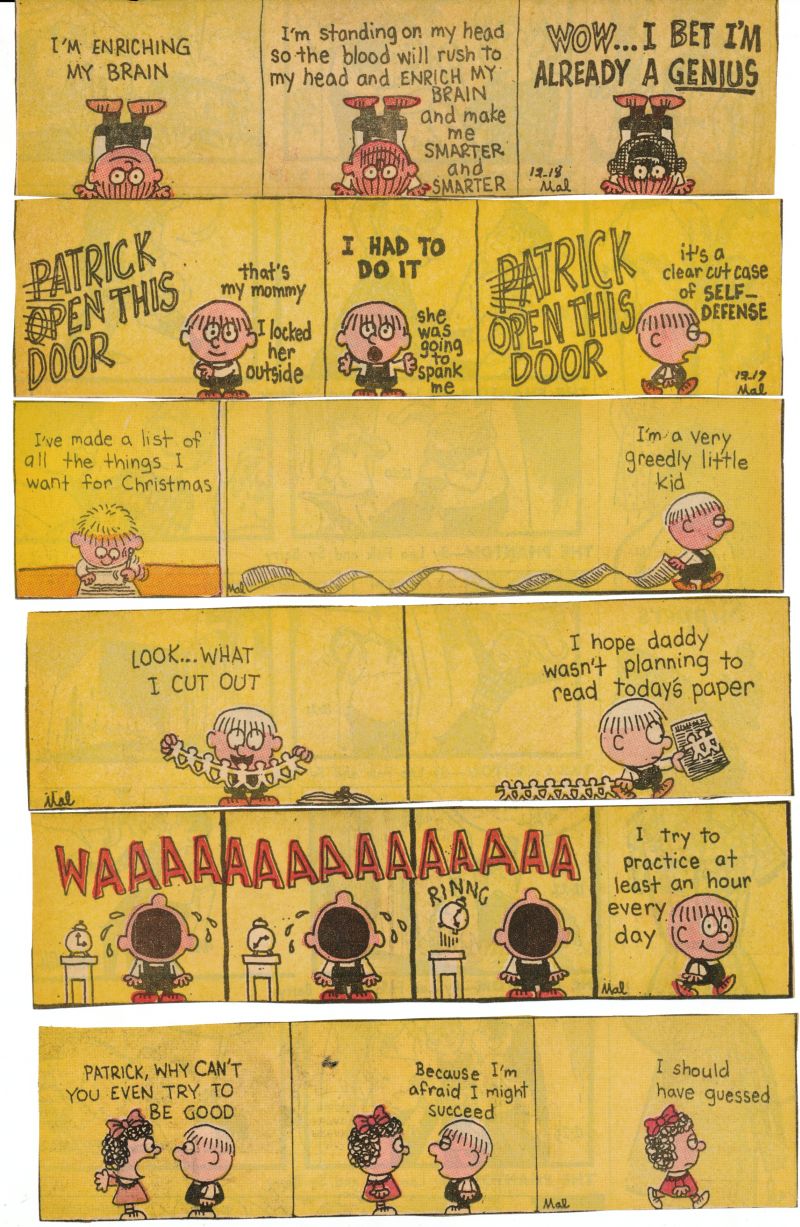 Wow, there are SIX Patrick dailies this time, from 12/18 to 12/23/1965. You can tell I was home from school for Christmas, no papers got away from me that week! Patrick has his own language, calling himself “greedly” in the 12/20. Patrick practising his screaming in the 12/22 reminds me of Lucy practicing her “fuss-budgeting” in the PEANUTS strip. I wonder if Patrick ever used a “throat-mike”? I’m working on another Oral Tradition story for next time, it’s a true relic. Remember to click on any image to see it larger, and write to me. 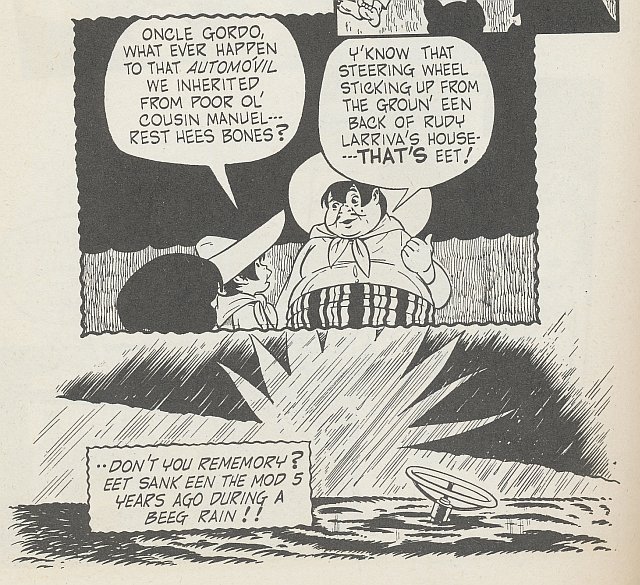 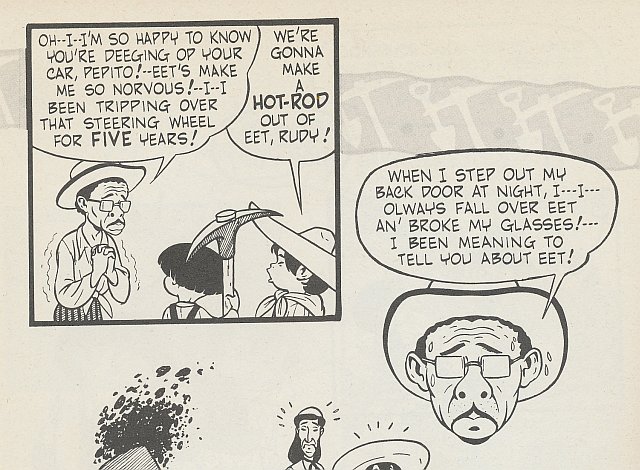 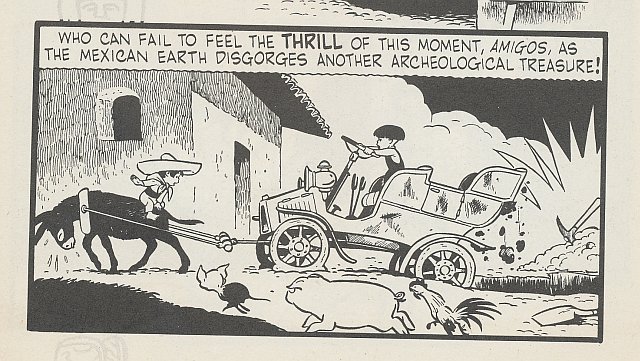 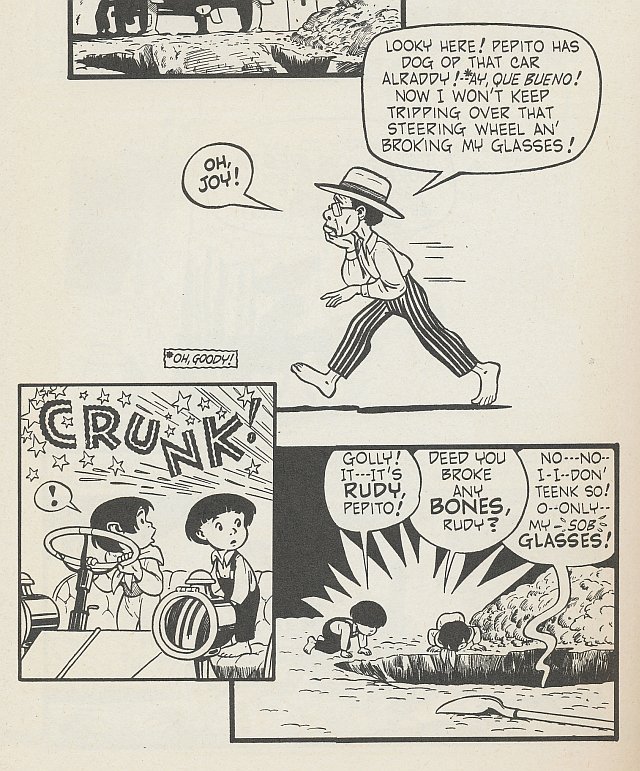 InÂ  tribute to my late teacher and amigo, Rudy Larriva, who recently went to cartoonist’s heaven, here are a few panels from a sequence in Gus Arriola’s GORDO from 1946. These feature Gus’s caricature of Rudy as a near-sighted little nebbish, constantly falling into the hole left by the excavation of Gordo’s 1912 Michigan Meteor antique carÂ from Rudy’s back yard. Rudy was a great animator, and teacher of animation when I was going to Chouinard Art Institute. I was animating aÂ  student film called “The Twenty-Second Tragedy” featuring a frightened little dog. I used a two-drawing shiver cycle of the dog as he confronted a scary axeman. One drawing had shaky lines, the other had normal lines and I exposed them on twos. Rudy discouraged me from using such simple tricks, he advised me to ANIMATE the shiver and really think more about the dog’s emotions. I made a whole lot more drawings, and had to admit that the scene had more impact that way. Rudy animated on such prestigious films as SONG OF THE SOUTH and MELODY TIME for Disney, he animated the tug-boat “Little Toot” in that picture. In SONG OF THE SOUTH, Rudy has draft credit in the “Laughing Place” sequence forÂ Sc. 9,Â  shared with Ollie Johnston, close-up of Bre’r Rabbit tied up on a spit, Sc. 30, shared with Eric Larson, close-up of Bre’r Rabbit starting to sing the “Laughing Place” song: “Hee-Hee-Hee-Hee, Ho-Ho-Ho…” and Sc. 31, also shared with Eric Larson, Long shot of the Rabbit, Fox andÂ Bear with Bre’r Rabbit leading them, tied to a rope. Some experts give Rudy the credit for Sc. 66,Â 67 and 68 of the “Tar Baby” sequence, as well, but the draft credits Eric Larson. These scenes transitioned back to a shot of Bobby Driscoll listening to the story asÂ Bre’r Fox and Bre’r Bear danced around the tar-bound Bre’r Rabbit.Â Â Rudy was also one of Chuck Jones’s early animators at Schlesinger, notably on ELMER’S PET RABBIT and GOOD NIGHT ELMER from the early 1940s. When I met Rudy he was directing at Filmation. He admitted that his Road Runner cartoons of the late 1960s were not as well-animated as Chuck Jones’s, but he felt that they had superior camera work by Ray Thursby, who shot those cartoons at Format Films, where Rudy also directed portions of THE ALVIN SHOW. Rudy was a smallish, soft-spoken man, not quite as helpless as Arriola depicted him, but not prone to histrionics. He lived to the age of 94. I wish I had been in touch with him all these past years, since Chouinard. My friend Vincent Davis, visited Rudy often. Evidently he was reclusive in his last years and discouraged visitors. He was really a grand person and a wonderful talent, you will be missed mi amigo. Adios, requisat in pace. We will continue the Gordo strips next post with more panels devoted to Rudy Larriva.

Felix this time is from 9/14 to 9/20/1936. Danny Dooit, Socky, Snobbs and the whole Dooit clan vanish from Felix’s life now, as Felix manages to escape from the zoo. The fisherman in the Sunday page is a precursor to more fishing gags to come in the succeeding dailies. 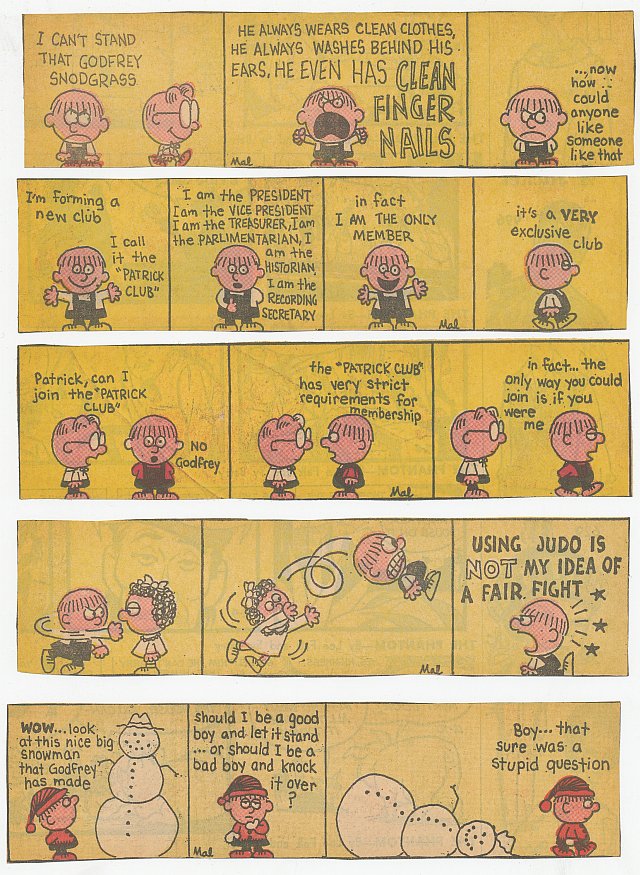 In Patrick, from 12/6 to 12/10/1965, Patrick organizes the “Patrick Club”; so exclusive that he is the only member. No Groucho, he. The gag for 12/10 reminds me of Red Skelton’s radio character, “The Mean Widdle Kid”. Patrick arguing with himself over whether to be good or bad is reminiscent of Skelton’s “If I dood it, I get a whippin’…I dood it!” Sometimes when the “Mean Widdle Kid” was contemplating a malicious act, he would say, “I don’t know why I’m wasting time arguing with myself, I’m gonna dood it anyway!” Mal Hancock’s Patrick is unapologetically mean-spirited, unlike a lot of contemporary comedy which IS mean-spirited, but lies about it’s intentions.