Howdy Readers, if you want a quick and easy way to enlarge the pictures on the Catblog, just hold down your “Ctrl” (Control) key and click the + (plus) sign to enlarge and the – (minus) sign to reduce them. Remember to HOLD DOWN the Control key while you are doing this. Enjoy! 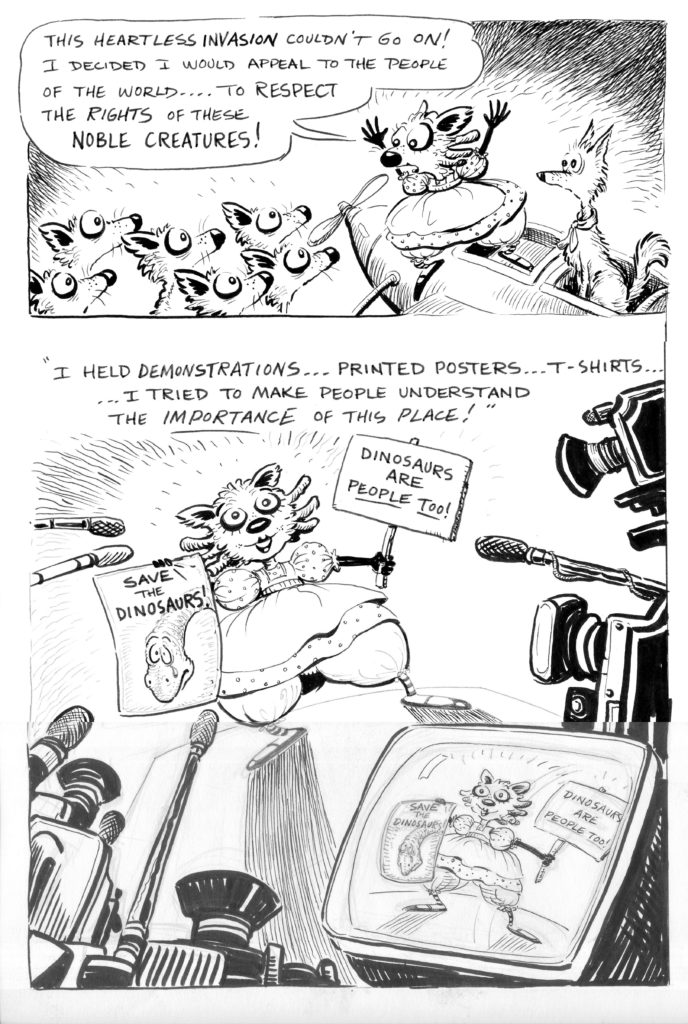 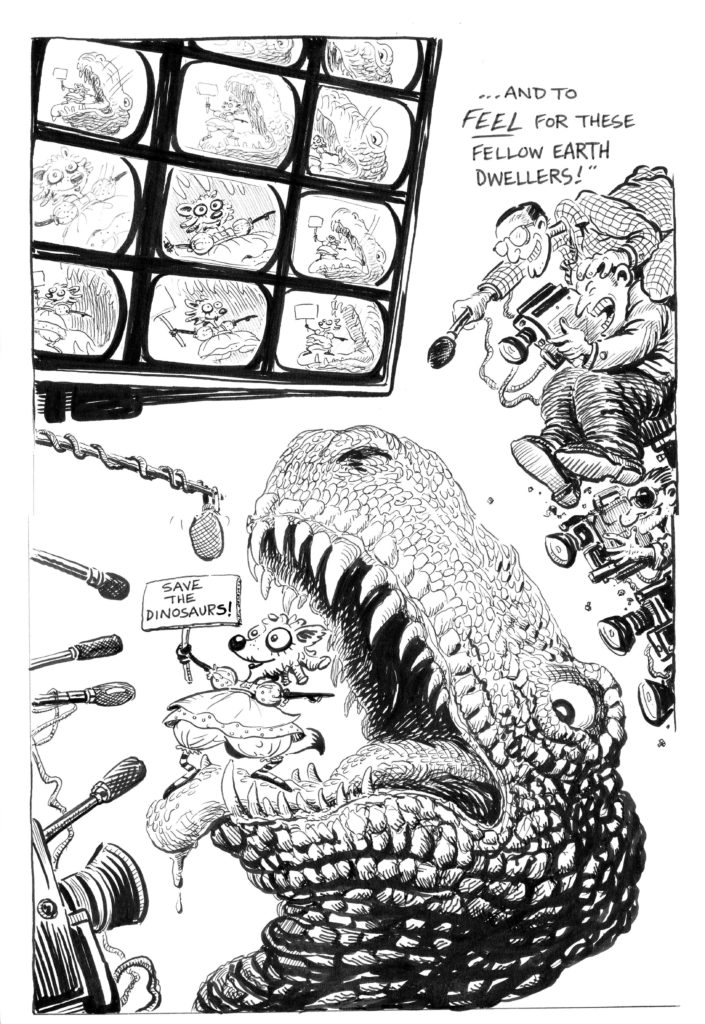 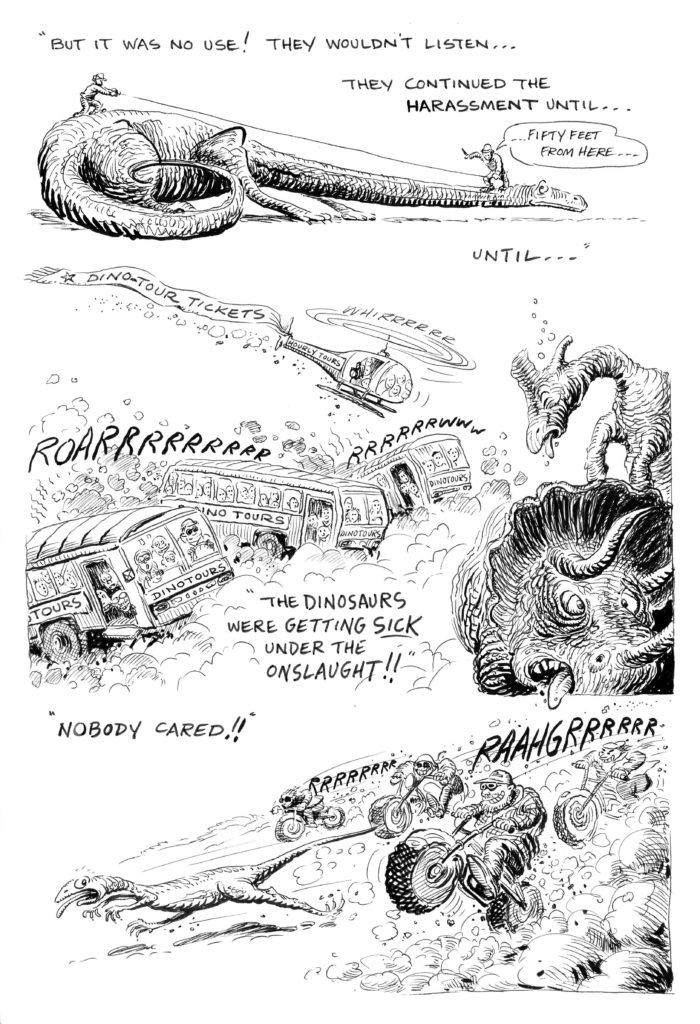 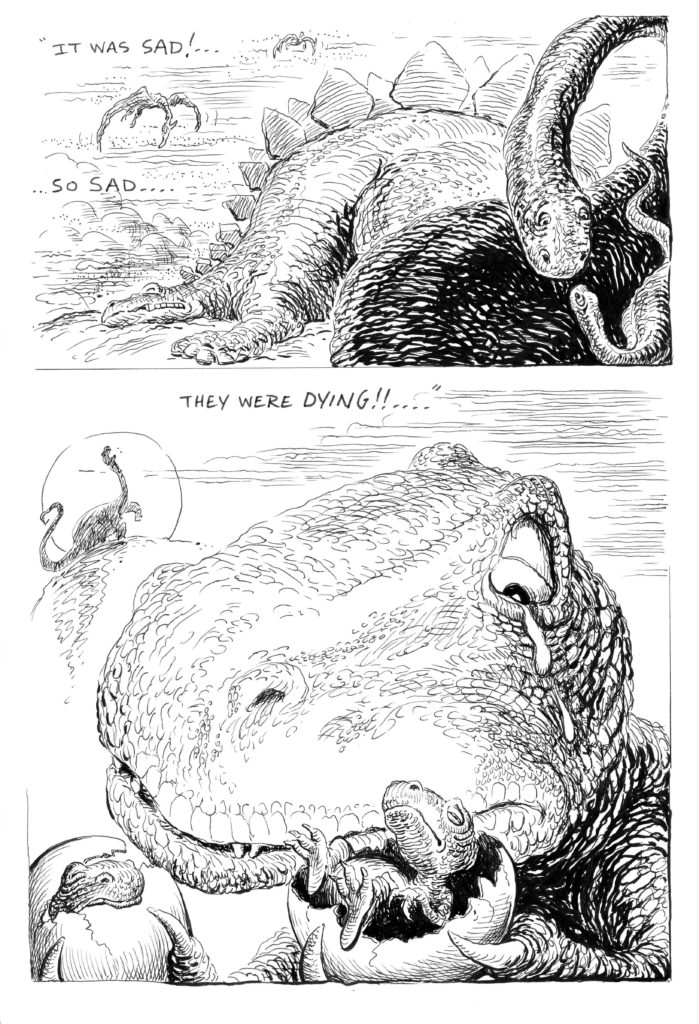 Here’s part four of Cathy Hill’s unpublished comic story: “Racketty Ann and The Lost World”. Cathy was truly a prognosticator of our current dilemma, as she attributes the dinosaur’s mortality to the human encroachment of their island. She combines comedy, comment and empathy as she uses comic drawing on pages 14 and 15, and a more sympathetic treatment on page 16. The first panel shows a stegosaurus collapsed in the background while a brontosaur looks after her little one in the foreground.Â  InÂ  the second panel, Cathy uses dinosaur tears as a mother tyrannosaur looks over her ailing progeny still in the shell.Â  As you wipe away the tears, enjoy the multiple screens of the videographers on page 14, and the intrusion of the buses, helicopters and motorcycles on page 15. Coming soon, the final chapter of this epic tale.

Felix is from 8-14 to 8-20-1933 this time. Felix saves Danny from the forest fire, much to Papa Dooit’s relief.Â  However, Pop’s money was burned in the fire and he faces financial ruin, but Danny gets a 200 dollar bonus from the logging company for saving their logs, so Papa is rescued. Poor Felix, however, is left out in the rain and seeks refuge in an empty boot. The Sunday page continues the adventures of Felix and Danny at the circus, trying to dry clean a bear!

Myrtle is from 5-16 to 5-22-1949 this time out. In the 5-16, Myrtle looks kind of like a boy in the first panel as she lifts weights, then reverts to looking like a girl as she puts on her hat with the braids attached. She does this to impress “Walton”, a very rich boy who likes “proper” behavior. Myrtle starts to loosen him up by 5-21, as they are both blowing bubbles in their sodas. The Sunday page features a beautiful Fisher layout, as Freddie spray paints Myrtle, Sampson, Hyacinth and even the little Myrtle doll, much to Susie’s horror.

Krazy, from 11-29 to 12-11-1943, is mostly non-continuous gags this time, I like the reference to Kayenta, in the 12-7, and the feline subtext in the 12-10, as Krazy “puts the light out” by placing the lamp on her back porch, in a beautiful panel using intricately cross-hatched blacks to reveal Offissa Pupp’s bewilderment. You will note that the 12-4 to 12-11 strips are a bit taller, that’s because I got them from the San Francisco Examiner, which was one of the few papers to run the Krazy Kat strip in the 1940s, and probably the only one to run the full panels as Herriman drew them. Again, these panels show the little Coconino theater that Garge imagined, the little stage with the floorboards exposed, like in the 12-8 and 12-9. The KFS files don’t have the un-edited panels, but you will see them here in the Catblog! 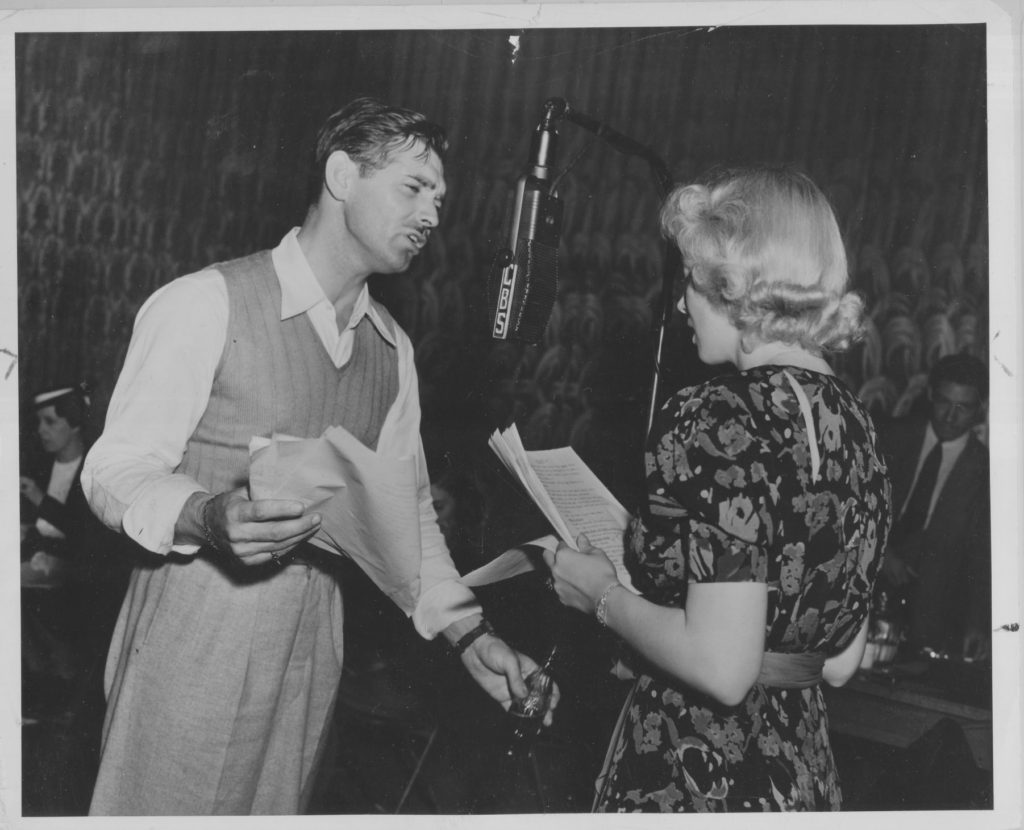 Here are more stills from my late brother’s library and his extensive files on Clark Gable. I chose these because they feature Mr. Gable’s checkered career on network radio. This one features Clark and Virginia Bruce performing the Oscar-winning motion picture “Cimarron” on the Lux Radio Theater, 9-26-37. Cimarron won best picture in 1931, and was the only Western which achieved that honor until “Dances With Wolves” in 1990. 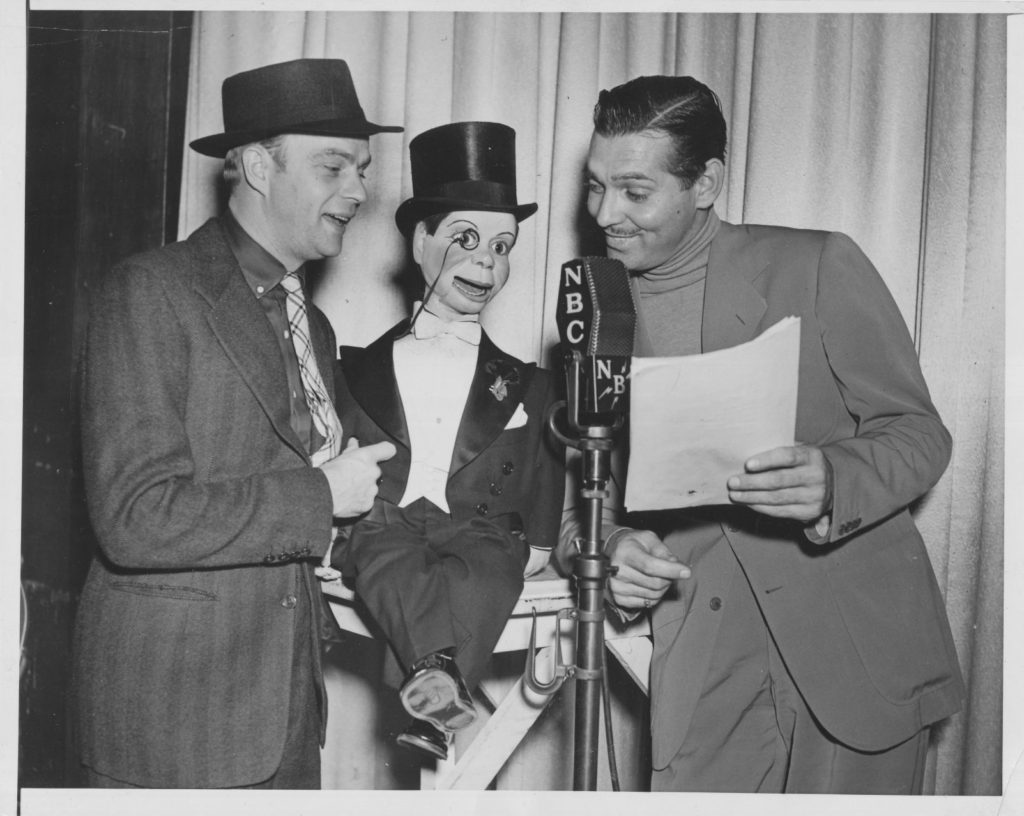 From that same year, 1937, here’s Clark on NBC, probably the Chase and Sanborn show, with Edgar Bergen and Charlie McCarthy. This would have been for the 10-17-37 broadcast, featuring the Stroud twins. This program still exists! Do a search for it. 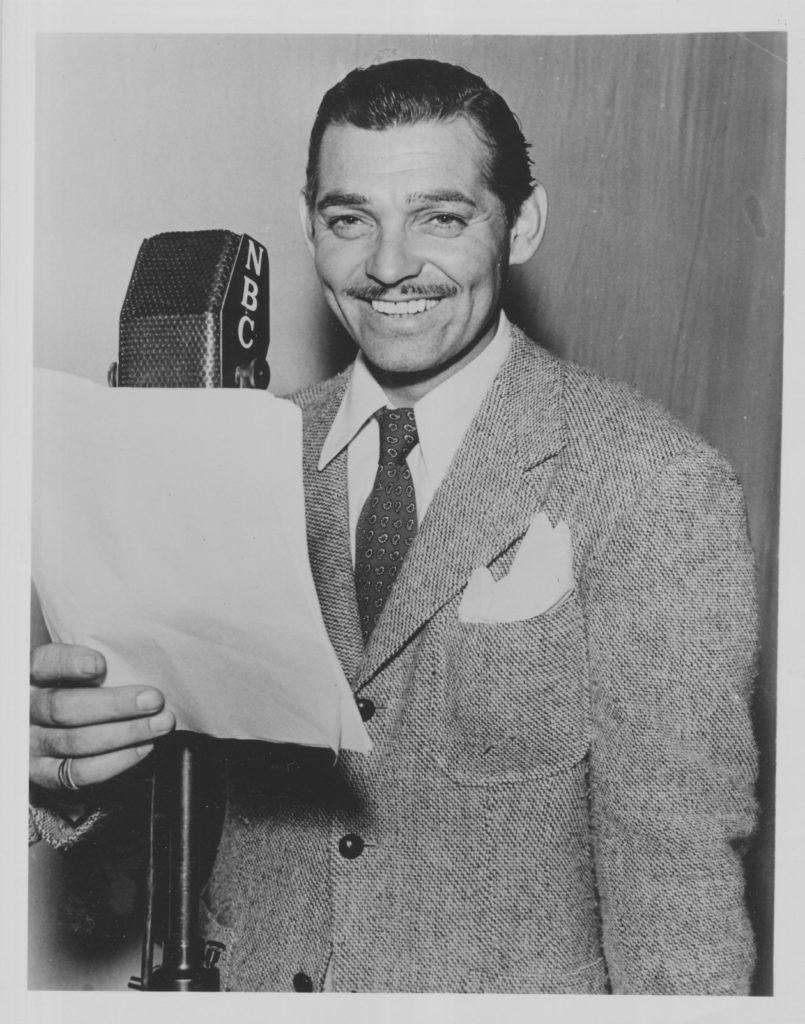 I’m not sure of the exact date of this great photo of Mr. Gable, but it is probably pre-World War 2. Clark seems to be very happy in this shot, maybe he enjoyed performing on radio, no make up necessary! 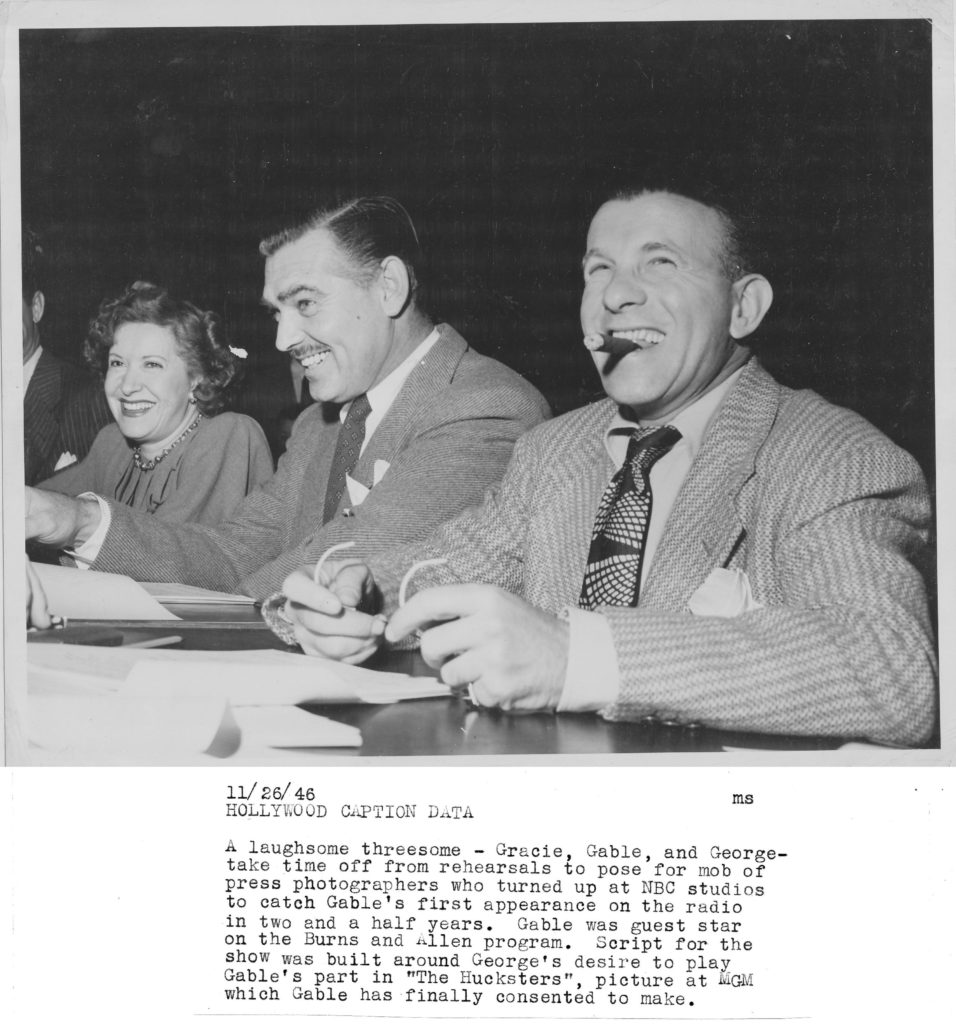 And last but not least this time, a rehearsal shot from the Burns and Allen show of 11-21-46, even though the photo is dated 11-26. This was Clark’s first network radio appearance since his World War 2 service, and he seems happy to be performing again. Sadly, this show has not survived, but maybe a collector has it on a reel to reel tape somewhere. “The Hucksters” was Gable’s second MGM film after his return, and he didn’t like the novel the screenplay was based on, saying “It’s filthy and it isn’t entertainment.” Read more about the picture here.