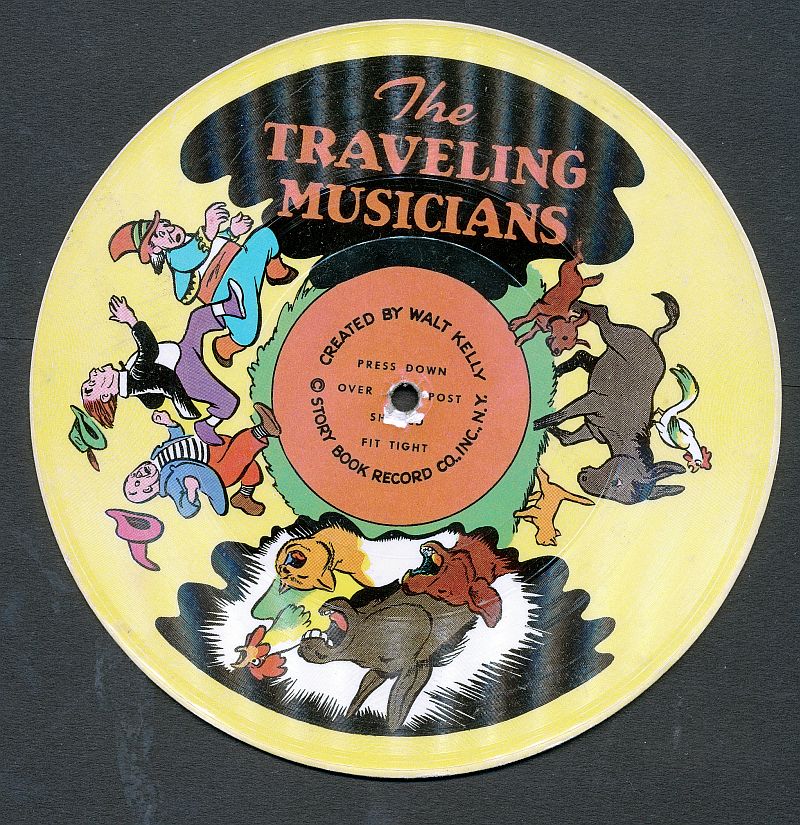 Â Here’s wishing the best of the Holiday Season to all my readers wherever you are! As a special “gift”, I’ve put up these two sides from Walt Kelly’s series of cardboard records for the Story Book Record Company. He recorded these in 1946, early in the wave of post World War 2 children’s records. He did 16 sides in all, they only run a little over a minute per side, because they turn at 78 RPM. These two stories, The Lion and the Mouse and The Traveling Musicians are good examples of Kelly reading and performing in his hysterical and histrionic acting style. Mike Barrier in his 2015 volume called “Funnybooks”, tells the story of these recordings on pages 226 and 227, get your copy for Christmas! What I love about these records is that I got to experience the younger Walt Kelly when he had his full range of bass and treble and could do squeaky mouse voices or grumbling, roaring lion voices and narrate the story in his “normal” tone of voice. As you listen to these, imagine you are watching Kelly pitch a storyboard, his pitching style was probably quite a lot like these records sound. His voice changed considerably by the time he recorded “Go Go Pogo” and “Lines Upon A Tranquil Brow” for the 1956 record album, “Songs Of The Pogo”. His energy fell considerably, he can barely bellow out “Break Out the Cigars, This Life is For Squirr’ls. We’re off to the drugstore to whistle at girls.” I won these records on Ebay, and digitized them from our old 78 turntable. The sound has an electronic “hum” in it, and The Traveling Musicians has a skip or two, but these are only cardboard base records with plastic grooves laminated on to them, so just go along with them. Consider it time travel! Click on the line below; that should get you over to the Archive.org website, where you will see a player bar. I hope you will enjoy them.

Â Felix is from 11-26 to 12-2-34 this time out. Felix loses his home with the wealthy dieting lady and her family after eating up too much of his mistress’s food. I love the 11-28 as Felix does a gag from which Tex Avery spun a lot of comedy gold in his 1940s MGM cartoons. The old “Hospital Zone” joke, as Felix gets swatted by a cop’s club and runs into the woods, before he can say “OW”. Tex used this in “Rock-a-bye Bear” for instance, as Butch the Bulldog has to continually run out of the sleeping bear’s hibernation house so that he won’t scream “OW” or “YEOW” and wake the bear up. The pose of Felix in the third panel ofÂ the 12-1 was duplicated on a strip of wallpaper designed for a child’s room in the 1930s. The Sunday page continues Felix’s adventures with the wealthy tycoon who adopted him. Felix scares a burglar away with a pair of huge arms whichÂ heÂ accidentally brokeÂ off of a statue.

Â Here’s Dudley Fisher’s “Right Around Home” from 8-30 to 9-5-1948. This time, Freddie worries about his bald spot in the first three dailies, and Myrtle has a problem with moving her chair, so that her Mother Susie can sweep under it, in the next two dailies. In the Sunday, “Bingo’s Birthday” Bingo and his dog friends have a picnic lunch, while Hyacinth the Cat, next door, misses her date with Thomas, the pet cat of Freddie and Susie’s next door neighbors.

Â Krazy is from 12-7 to 12-12-1942 and continues Mrs. Kwakk-Wakk’s Submarine Spy Center from last time. I love the last panel in the 12-8, as Offissa Pupp is shocked by an electric eel. The original art from this panel, is a great Herriman “scratch-off” demonstration. Garge paints a lot of solid black in the panel in question and begins to carve out his delicate cross-hatched look with a steel etching needle. He apparently lost his scratch board, so he had to start over again. So the next time you lose your scratchboard, just paint a puddle of ink onÂ a piece of Bristol boardÂ and scratch! You’ll be walking in the foot steps of giants and scratching with the best of them.

Merry Christmas and a Happy New Year to you all, Feliz Navidad and Prospero Ano Nuevo! Mark