Comments Off on Pencil Test is Finished! 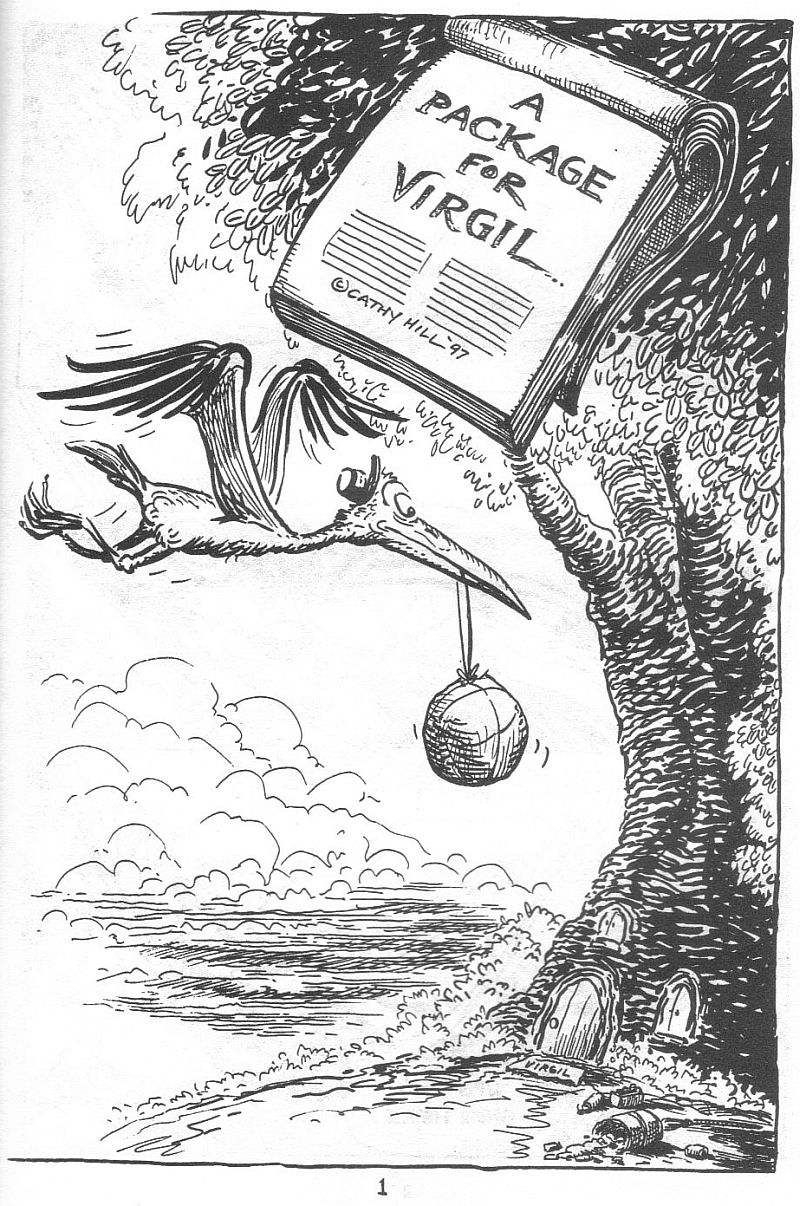 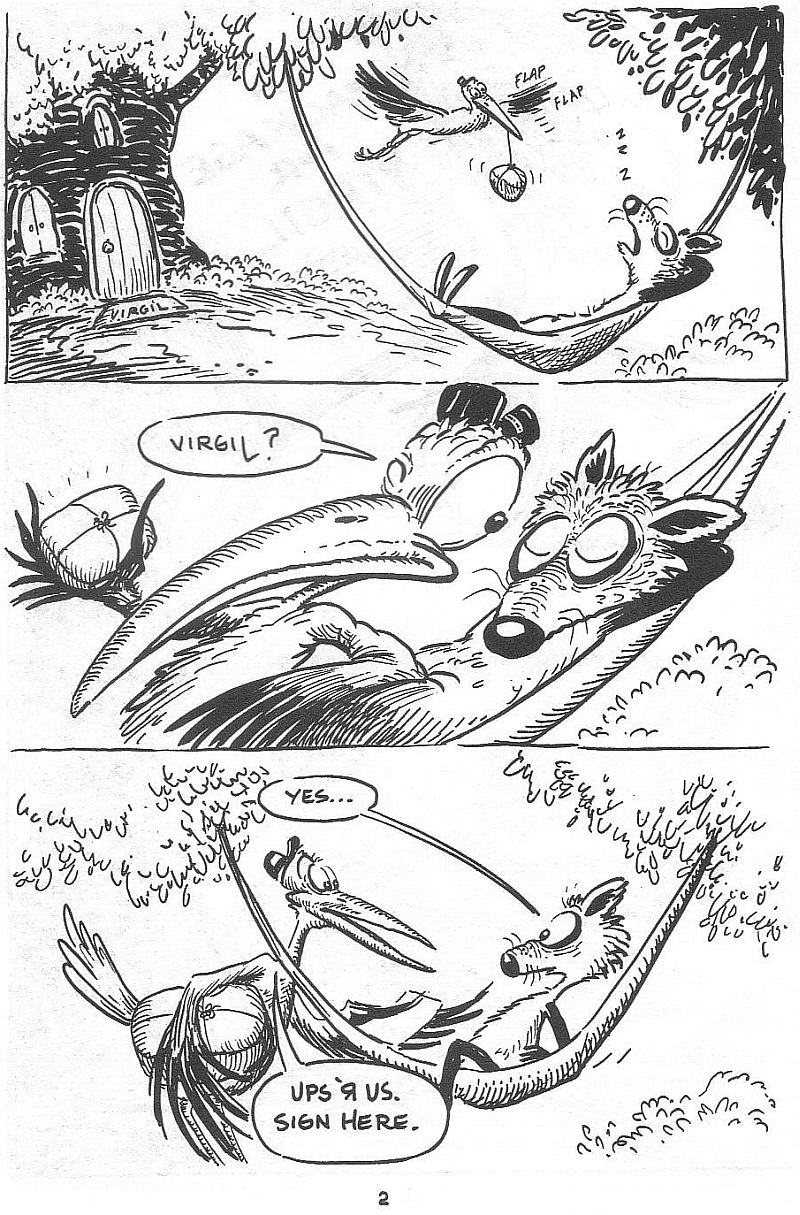 It’s hard to believe readers, but the pencil test for my short cartoon: “There Must Be Some Other Cat”, is cut together and synced up at last! Maybe some day we will post the pencil test on itsthecat.com, we’ll see. There are a few little adjustments, but the timing of the animation and the musical ideas work well. Greg Ford, Larry Q. and company worked hard and smoothed all the rough edges from my scribbled exposure sheets and did some first-rate camera work. Maybe some day soon I will see the first color scenes of the cat in his desert environment! I feel like taking everyone out for nopales at the Cacti Cafe!

In comics this week, I’m presenting the first two pages of Cathy Hill’s “A Package For Virgil” from Mad Raccoons #7. This story seems to star Virgil, but is really a showcase for Mangy as co-star. Mangy was originally just a back-up feature for the Raccoons, and in this story…..well, you’ll see. Marvelous Mike from 8/27/56 to 9/1/56 continues the story of “The Serenader”, Mike’s “Dad”, Cliff gets all the credit for playing Chopin like Van Cliburn, much to his wife’s disgust. Krazy Kat this week is missing Monday, 1/16/39, anybody have it? In KK from 1/17/39 to 1/21/39, it’s guest or “guess” week, as the action moves from Krazy’s house, to the Jail and back to Krazy’s house again. 1/20 is a bit obscure, Offissa Pupp and Ignatz emerge from Jail, only to see Krazy approaching and put themselves back in stir again. The “love triangle” theme was so well established by this point, that it only has to be hinted at to form a springboard for a gag.  From Felix #5, we have the first two pages of “Some-Her” by Jim Tyer. Kitty as drawn by Tyer, is one strange cat. I love the delicately drawn foot with the shoe dangling from her toes in the first panel. Kitty is more human than cat by this time; look at her profile on page two, panel two. Sometimes Jim puts heart-shaped “beauty marks” on her face making Kitty resemble Lilly Langtry or some Robert W. Service heroine. They only gave Tyer one story and a gag page in this issue, we’ll continue the story next week, if we can.

Remember if you wish to comment, write to me at molasses@earthlink.net. Remember to click on the thumbnail images to see them larger.

Comments Off on New and Old 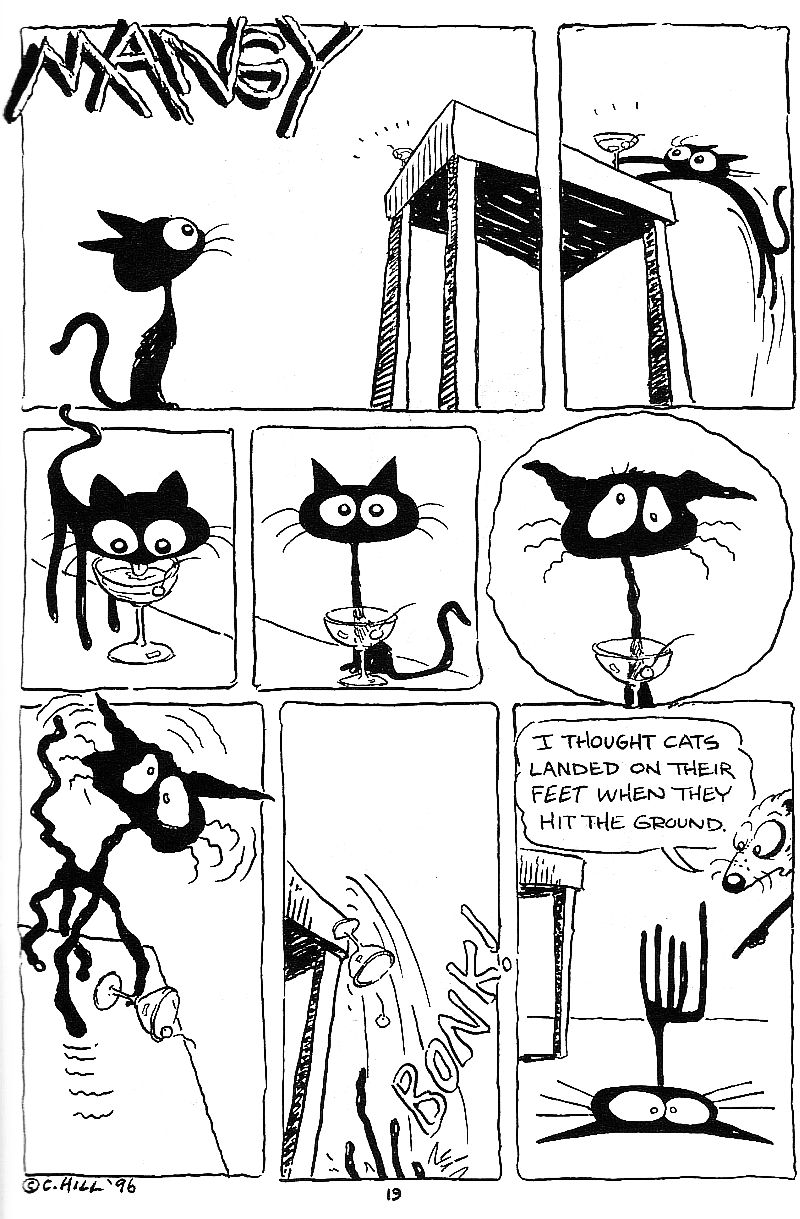 Hi Readers, hope you are enjoying yourselves at the San Diego Comic Con! Hello to my friend Ed Buchman, make sure you visit his Little Lulu Fan Club meeting at the convention. It will take place July 26th (Sat.) from 3 to 4 PM in Room 24A (on the top floor, off the city-side hallway near the South end of the immense building). Tell him that Mangy sent you! Here’s a “new” installment of Mangy written and drawn by my wife, Cathy Hill, which I call “Mangy’s Cocktail”, it’s from Mad Raccoons #6. Mike Fontanelli, cartoonist De Luxe, wrote in about Mangy. He thinks she’s “right up there with MUTTS..”! Wouldn’t Mooch be jealous? He thinks Mangy should be syndicated in newspapers. It’s an interesting thought, but for now we will be “syndicating” her adventures via this blog. Cathy was flattered by the compliment, thanks Mike.

In old stuff this week, we have Krazy Kat from 1-9-39 to 1-14-39. Krazy spends the week debunking old sayings, pretty much as he did last week. Marvelous Mike’s “dad” Cliff goes on a vacation to the Indian Rock Hotel (Catskills?) and Mike fills in playing piano for “The Serenader”. Of course, Mike plays an excellent Chopin. Here is the conclusion to the Rock and Rollo story we started last week: “A Moving Story” from Felix #4.  I love the sign pointing to Rock’s injured finger in the last panel on page two. It’s a Jim Tyer “understatement” as a coda to an overstated slapstick situation. This completes the reprinting of Felix #4.  In Felix #5, Tyer gets fewer pages, unfortunately. See you next week!

Comments Off on Latest Installments 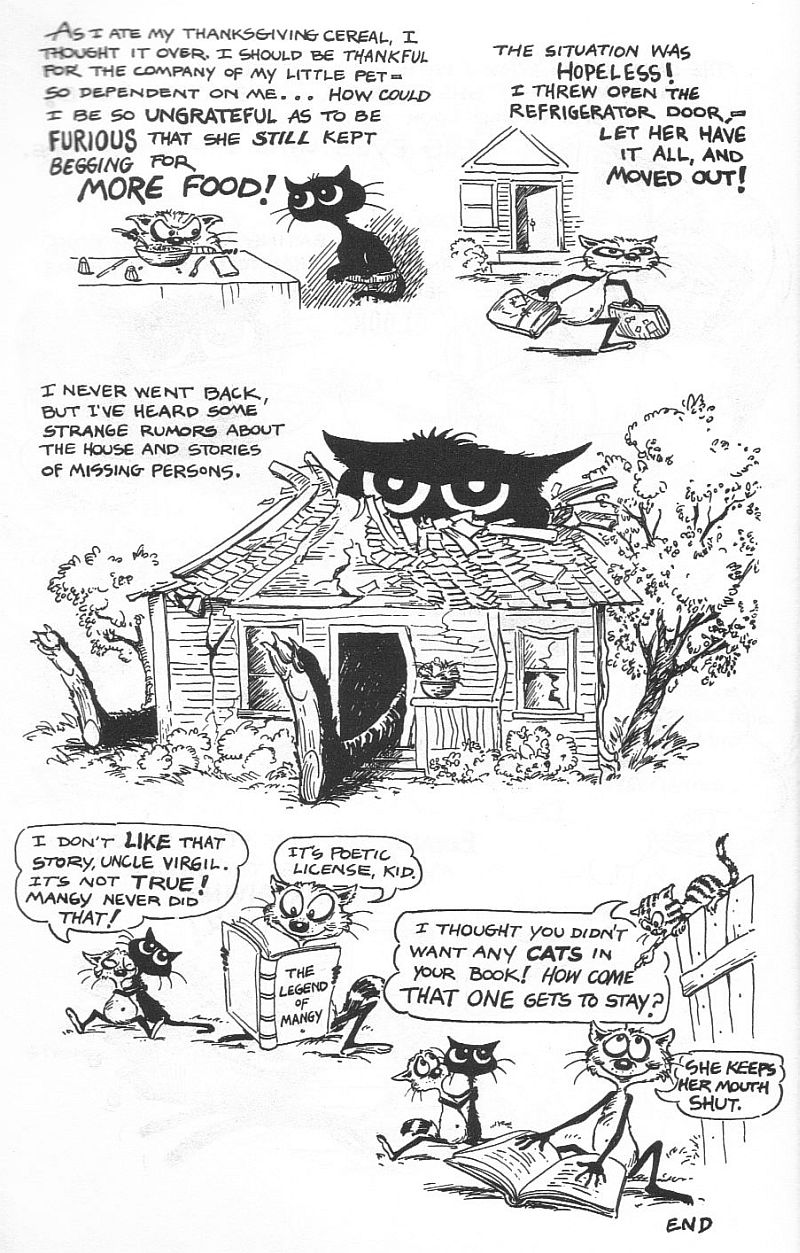 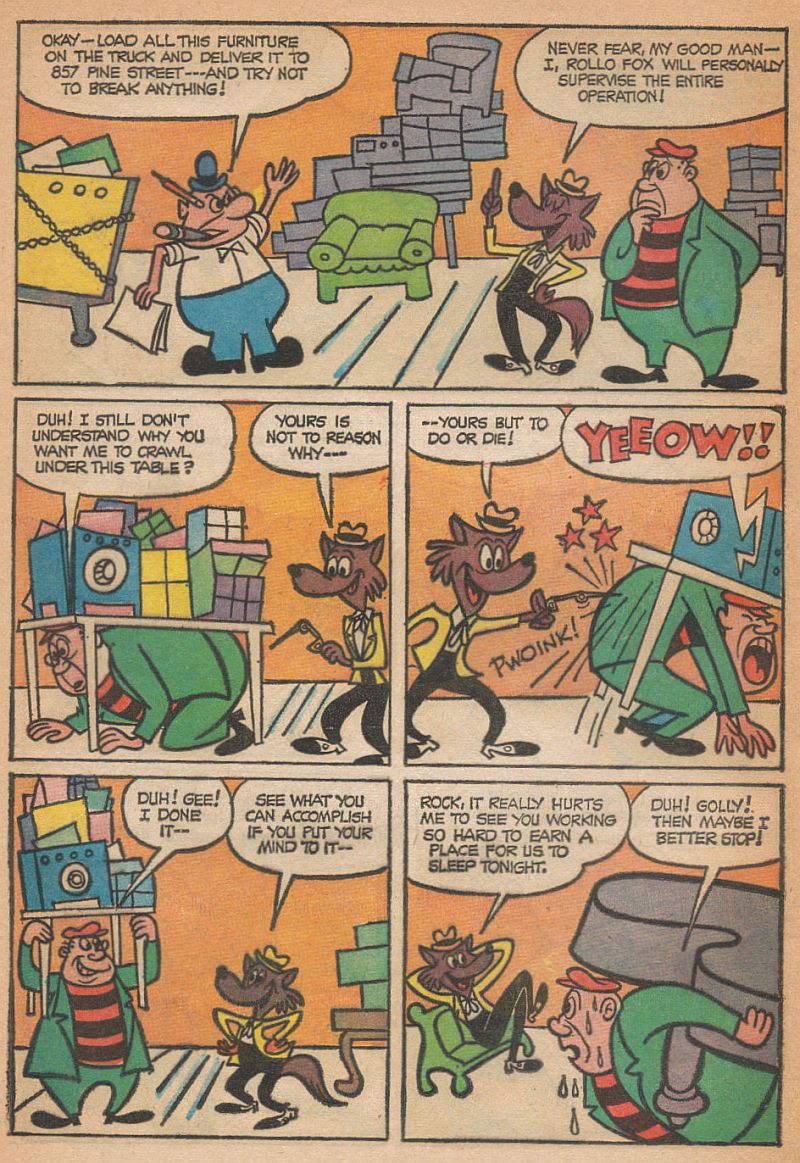 An old friend came back in out of the cold, Krazy Kat! He’s back with the first dailies of 1939: 1/2 through 1/7/39. Ignatz and Krazy spend the whole week declenching the words “Coat of Arms”. Marvelous Mike this week concludes the “Kitty Delight” cat food story. Cliff gets all the credit for Mike’s deft touch with a candid photo and a funny caption. All the little kittens get loving homes into the bargain, I love this strip! The Jim Tyer Felix department has a rare non-Felix story from Felix #4, “Rock and Rollo in ‘A Moving Story'”. Rock (no relation to Rock Bottom, evidently) is so dumb that he calls Rollo the Fox “Rock” on page one! Or is it a continuity error? The drawings of Rollo sticking Rock with a safety pin on page two are the essence of Tyer. I have no idea who created these two characters, their sole excuse for being seems to be the obvious pun in their first names. I still haven’t heard from any of you comics historians on whether Gaylord DuBois or some other scripter wrote these stories. I’d love to hear from you if you know anything about them at molasses@earthlink.net.  Not much else to report on this week, see you soon! 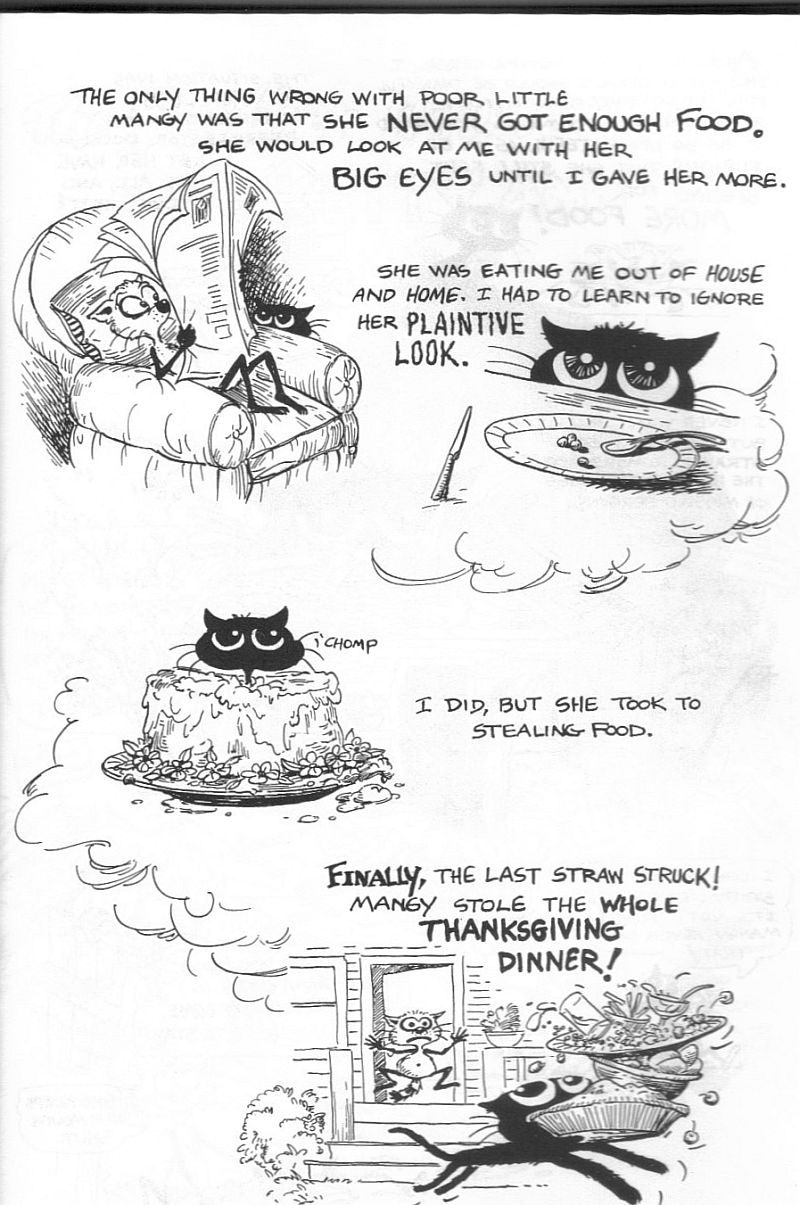 Hi Readers, sorry for the long absence. Cathy and I have been doing some more location painting, two weeks ago we sketched and drew an alligator, many dogs and a cackle of hens and roosters at the Pasadena Humane Society. We would have drawn and painted some cats, but they had a lovely air-conditioned enclosure all to themselves and didn’t have enough space around them to house painters. The Humane Society has had the alligator for almost 10 years. She has her own generous space, complete with bamboo wall, a waterfall and her own splash pond. No wonder she’s always smiling! Two weeks ago, we visited Ports O’Call in San Pedro, near Long Beach. Cathy did a nice oil of an old boat house with a sail boat anchored nearby. I did a WC of an old kid’s merry-go-round. I concentrated on two goofy-looking pink and magenta rabbits with saddles on them. Our crit-master Walter laughed at my painting and remarked that I could do a merry-go-round anyplace, why didn’t I do a marine subject, since I was in San Pedro harbor? I replied that I suggested a cabin cruiser in the background, but I don’t think that satisfied Mr. McNall. On July 5th, Cathy was invited to be an “artist-in-residence” for an afternoon at the Huntington Hotel in Pasadena. She set up her easel right near the tea room and did a study of water lillies in oil. She based it on a beautiful smaller painting she did some time ago. She also displayed several of her recent paintings, a Flamenco dancer, the wildflowers in Borrego Springs. The hotel helped her get set-up, and I put down the tarp on the floor. It was a delightful afternoon, like being in an elegant salon with live piano music in the background, and brides, grooms and wedding guests filing past (there were about three weddings going on that day). No paintings sold, but Cathy wants to go back soon and paint in the Huntington again. The Huntington loves oil paintings, many old canvases adorn its walls. We loved being there.

A few weeks ago, I got the sad news that the Cartoon Brew Films website is being discontinued. I found out when I tried to log on, I was just directed back to the Cartoon Brew website. Brew Films was certainly a noble experiment in the marketing of new animated short subjects, Bert Klein and I were among the first to be on it. It seemed to get a lot of hits initially, but then interest tapered off. I was surprised that so few cartoon makers were using the site. Here was a chance to have new cartoon shorts on view to the public for only two dollars a download, how could it miss? The answer, You Tube and its many cousins offering loads of new “animated” shorts for free! I was hoping that “It’s ‘The Cat'” would have a chance to earn back some of its negative cost on Brew Films, but it wound up paying very little. The failure of Cartoon Brew Films means that the Internet has not yet found a way to market new short films in a way that returns any significant income to the creators. It is my fervent hope that some day there WILL be a way to bypass theaters and television and create an Internet cartoon theater that will be healthy both creatively and FINANCIALLY. Brew Films just wasn’t it. Right now, “It’s ‘The Cat'” does not have a home on the ‘net. Eventually, I would like to see it embedded in the www.itsthecat.com website, bracketed with ads for our merchandise. Maybe that time will be not too far away. For the present, however, the concept of the paying customer for new short cartoons on the Internet has proven a dead end. It was fun, and an honor to have “It’s ‘The Cat'” be part of the experiment. Thanks to Jerry and Amid for trying it. Thanks to all of you viewers who paid to see my little labor of love. Anybody want to invest in my next cartoon? I want to continue to make them and I could really use the help. Write me at molasses@earthlink.net.

Comics this week include page two of Cathy Hill’s “The Legend of Mangy”. I love the panel with Mangy’s BIG EYES and running off with an entire Thanksgiving dinner in her tiny mouth. This story means a lot to Cathy and me, we loved Mangy and enjoyed having her with us. The “Corporal Crock” story in L’IL ABNER concludes this week, it originally ran from April 30th through May 3rd, 1973. Bullmoose thaws out, and the FBI confiscates all the comic books! Abner won’t be back on the Catblog for awhile, look for a new feature starting soon! MARVELOUS MIKE continues the cat food campaign storyline, from August 6th through 11th, with August 8th missing. The Post-Dispatch failed to print the strip on that date, anybody got it? Felix the Cat by Jim Tyer ends the comics this week with the last two pages of “There Auto Be A Law”, from FELIX THE CAT #4. Next week, there will be the start of a “Rock and Rollo” story by Tyer, don’t miss it friends!