Â Look out for “Some Other Cat”, coming to the Santa Fe Independent Film Festival, held Oct. 16-20th.Â It screens here:Â http://santafeindependentfilmfestival.com/Detailed/631.htmlÂ and here: http://santafeindependentfilmfestival.com/Detailed/726.htmlÂ on Thursday Oct. 17th and Sunday, Oct. 20th, in Santa Fe, New Mexico. This was one of the rare times when a festival actually requested our cartoon to be part of their shows. They like the SouthWestern setting, and all the cacti featured in Kim Miskoe’s backgrounds. “Some Other Cat” will also be playing at the New York Film Festival, in a tandem performance with Itza’s first appearance in “It’s ‘The Cat'”. The press preview is coming up Oct. 2nd, I’ll fill you in on the exact screening time when I get it. The New York Film Festival runs from Sept. 27th through Oct. 13th. It’s been a long-held dream of Greg Ford’s and mine that the N.Y. Festival would run our cartoons and this year they will be running both of them!

The presentation at the L.A. Shorts Fest was good, I was quite surprised at how sharp and clear a projected Blu-Ray disc can look, almost as good as 35mm. However, the last scene in the cartoon, where Pearly’s house rises up off it’s foundation, had some fairly severe breakup in the ink lines of the house, due to the Blu-Ray. The audience was small, being a Monday afternoon at 3PM, and seemed to consist mostly of film makers and invited friends: 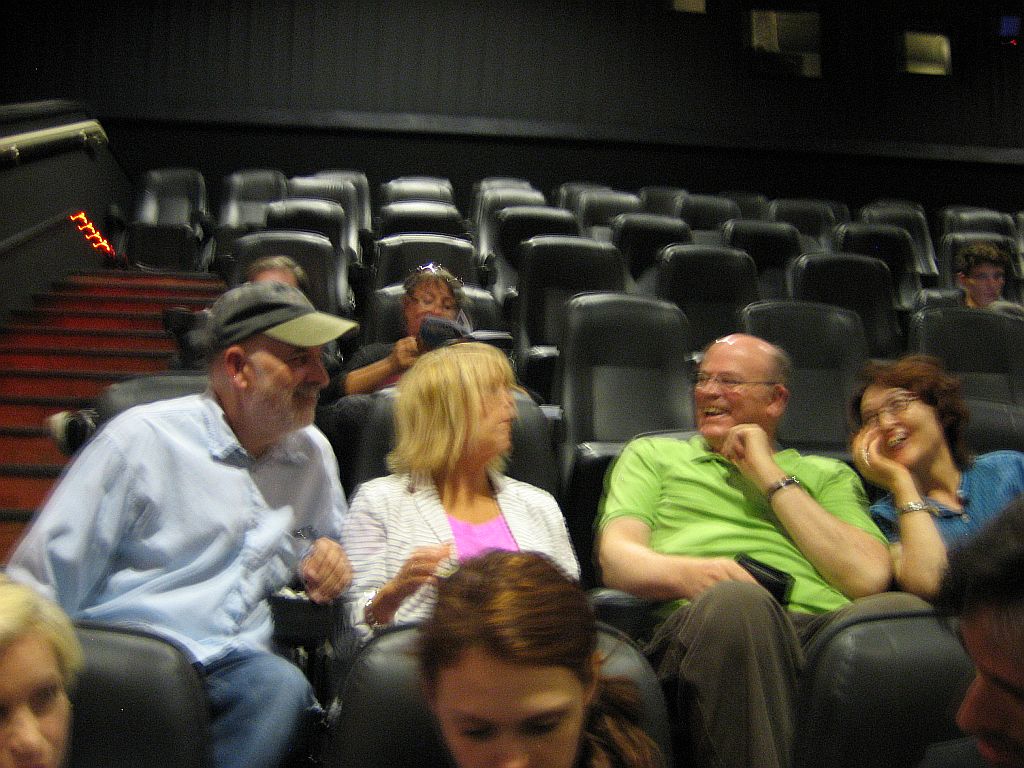 Â Here’s Tim Walker, Sue Crossley, Milt Gray and Katie Gray, no doubt convulsed by Tim’s dry wit. Here’s another shot of my wife Cathy, Bea Buchman, Ed Buchman (the foremost ailurophile), with Tim, Sue, Milt and Katie in the background of the theater. Notice the many unfilled seats.

Â Click to enlarge, this was at the Laemmle Noho 7 theater in North Hollywood. The audience didn’t laugh very much at the animated shorts, including “Some Other Cat”. Most of the other shorts were rather low-key and on the grim side, making Itza’s film seem very light-hearted in comparison. The final short of the program was called “Trusts and Estates” directed by a Cal Arts Student named Jeannette Bonds. The language used by the characters in her cartoon was so strong and over the top, that several members of the audience actually walked out! She told me that her cartoon was based on a conversation among “suits” at a restaurant that she overheard.Â After about 5 minutes of about the most graphic words I’ve ever heard on a soundtrack, the businessmen join hands in silent prayer! Jeannette explained that this was her “feminist comment” on male behavior, and she certainly made a point. Most of the audience’s questions were about “Trusts and Estates” at the end of the program. Jeannette was very nervous going in, not knowing what kind ofÂ reaction her film would get, butÂ the pictureÂ stood out mainly for it’s unexpurgated talk, not so much the drawing or animation, which was not as strong as the idea. As it turned out, none of the films run during the animation show won best animation, but “The Missing Scarf” made by Eoin Duffy from Ireland, shown opening night, took the prize. The Festival was run kind of haphazardly, on closing night, none of the winners received their certificates, as they weren’t printed in time.

However, I was very happy that the L.A. Shorts Fest accepted “Some Other Cat”, and that Cathy, Tim, Sue, Milt, Katie, Bea and Ed could all come and see it’s World Premiere. I wish we could have all talked longer, in a restaurant after the show, but not like “Trusts and Estates”! 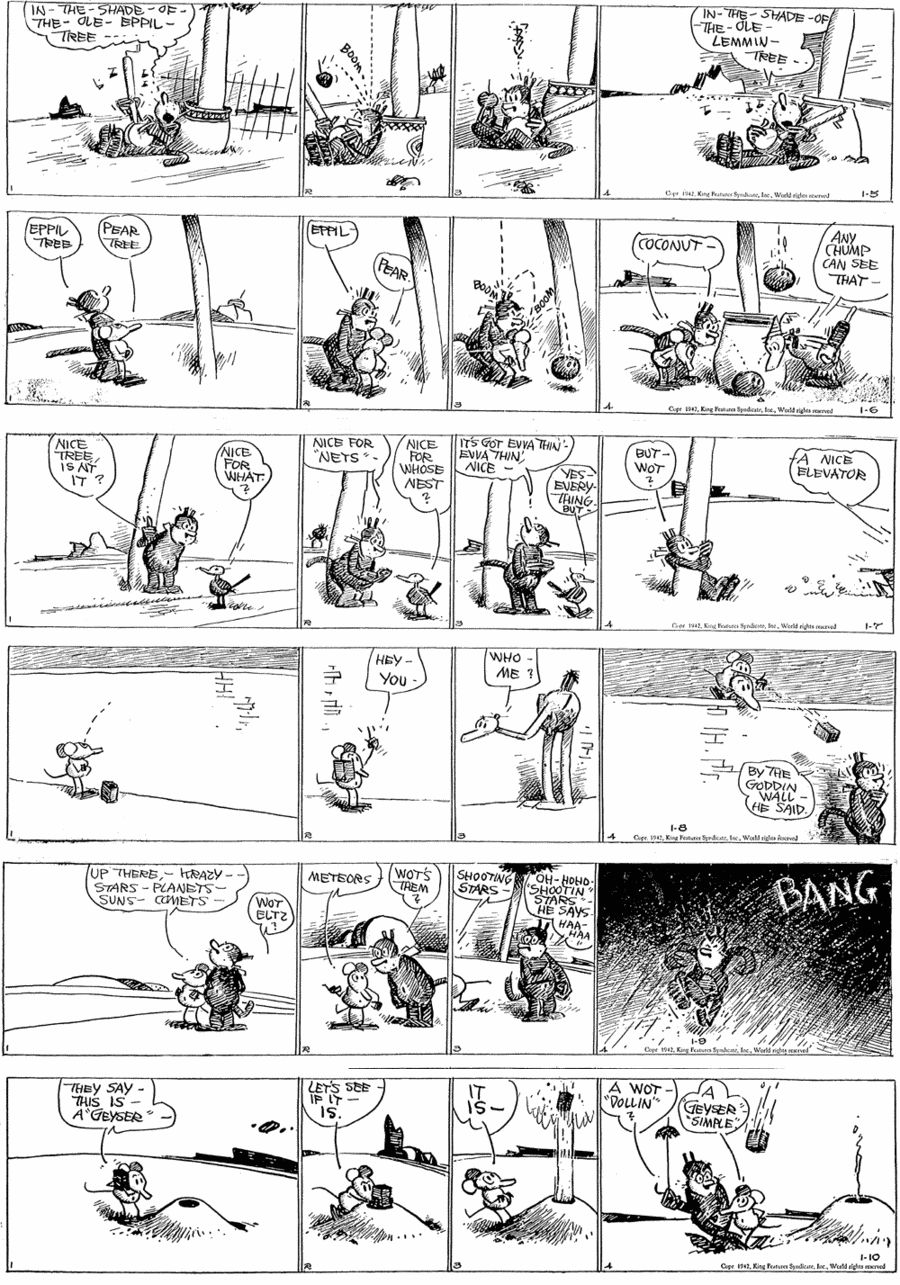 Â Krazy from 1-5 to 1-10-1942 is mostly about natural phenomena this time. 1-5 through 1-7 are gags about Herriman’s potted trees, but my favorite is the “shootin stars” gag of 1-9, where they all go “Bang” and startle Krazy in a beautifully shaded concluding panel. The original art probably used Garge’s scratching technique to pull graded shading out of the black ink. 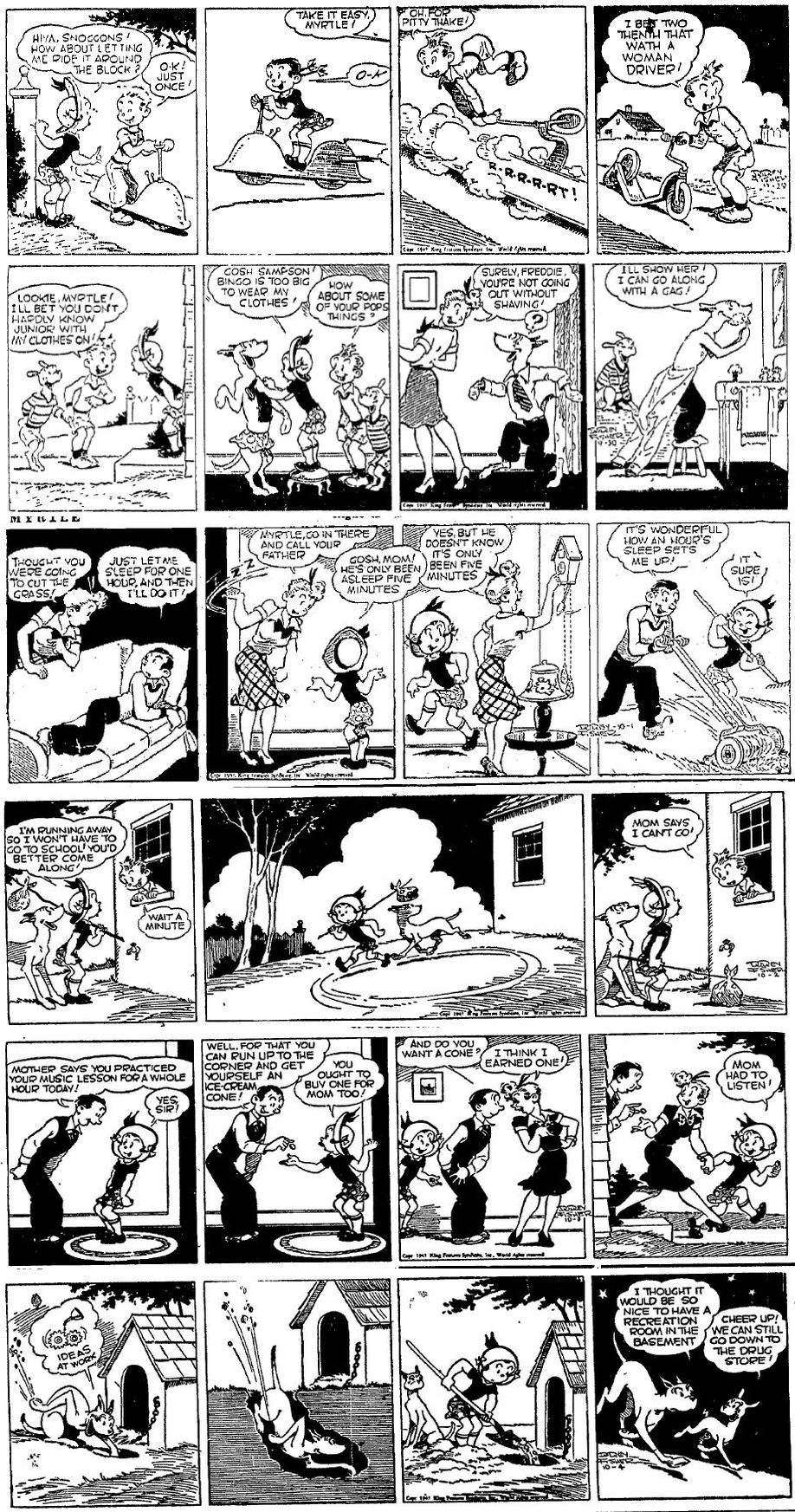 Â Bingo is the featured player in “Myrtle” from 9-29 to 10-4-1947. I love how Myrtle and Sampson play dress-up with Junior and Bingo in the 9-30. Myrtle’s mom seems to mistake Bingo for her husband Freddie, and Fisher carries the anthropomorphism to an absurd conclusion in the last panel. In the 10-4 strip, Bingo’s reasoning process is revealed as the slogan “Ideas at Work” hovers over his head in the opening panel. Bingo wants to dig a recreation room under his doghouse, but Myrtle fills it in. What Bingo couldn’t do in 1947, Snoopy did by 1970. I decided to just use the Myrtle strips I found on Newspaper Archive, without joining them with the tearsheets I have, I think they look O.K. this way, what do you think? 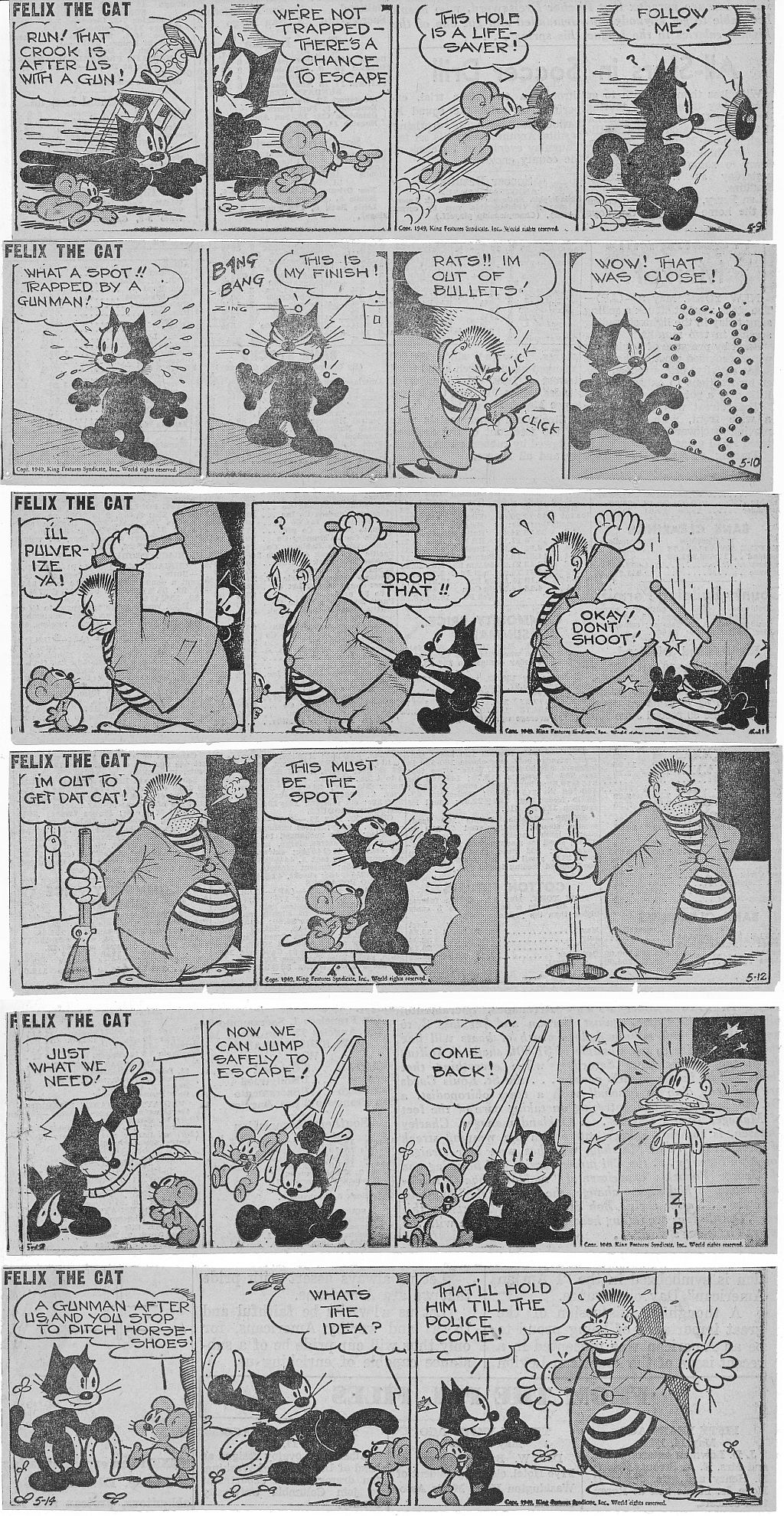 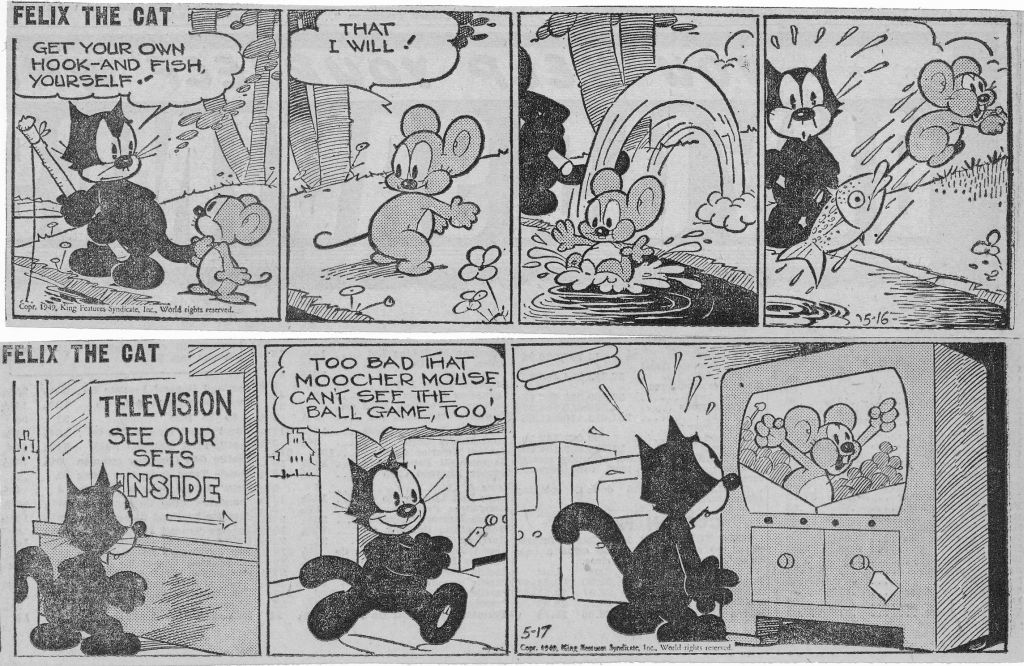 Â Here’s the last of the Felix tearsheets from 5-9 to 5-17-1949. From 5-9 to 5-14, Moocher and Felix continue to pursue the crook, and after a narrow escape, pin him to the wall with horseshoes. By 5-16, the crook is out of the story and Felix and Moocher go back to their rivalry, with television figuring prominently in the 5-17. In 1949, television was still not completely ubiquitous, but it was on the march, so Messmer found it fair game for gags. Next time, Felix will move backward in time, to 1934.

Â Here’s the Yogi Bear Sunday page thirds from October, 1963, drawn by Harvey Eisenberg. In the last two strips, we see the Ranger chain of command revealed and the General and the Captain both make appearances. It’s as if the U.S. Army took over the National Park Rangers. You can’t help but feel sympathy for Yogi in the 10-20, as he is blamed for the incompetence of the General Ranger. In the 10-13, there is a Native American gag involving a 200 year old peace pipe that still makes me chuckle, despite the stereotyping. See you all next time.

Count Down to September 9th! 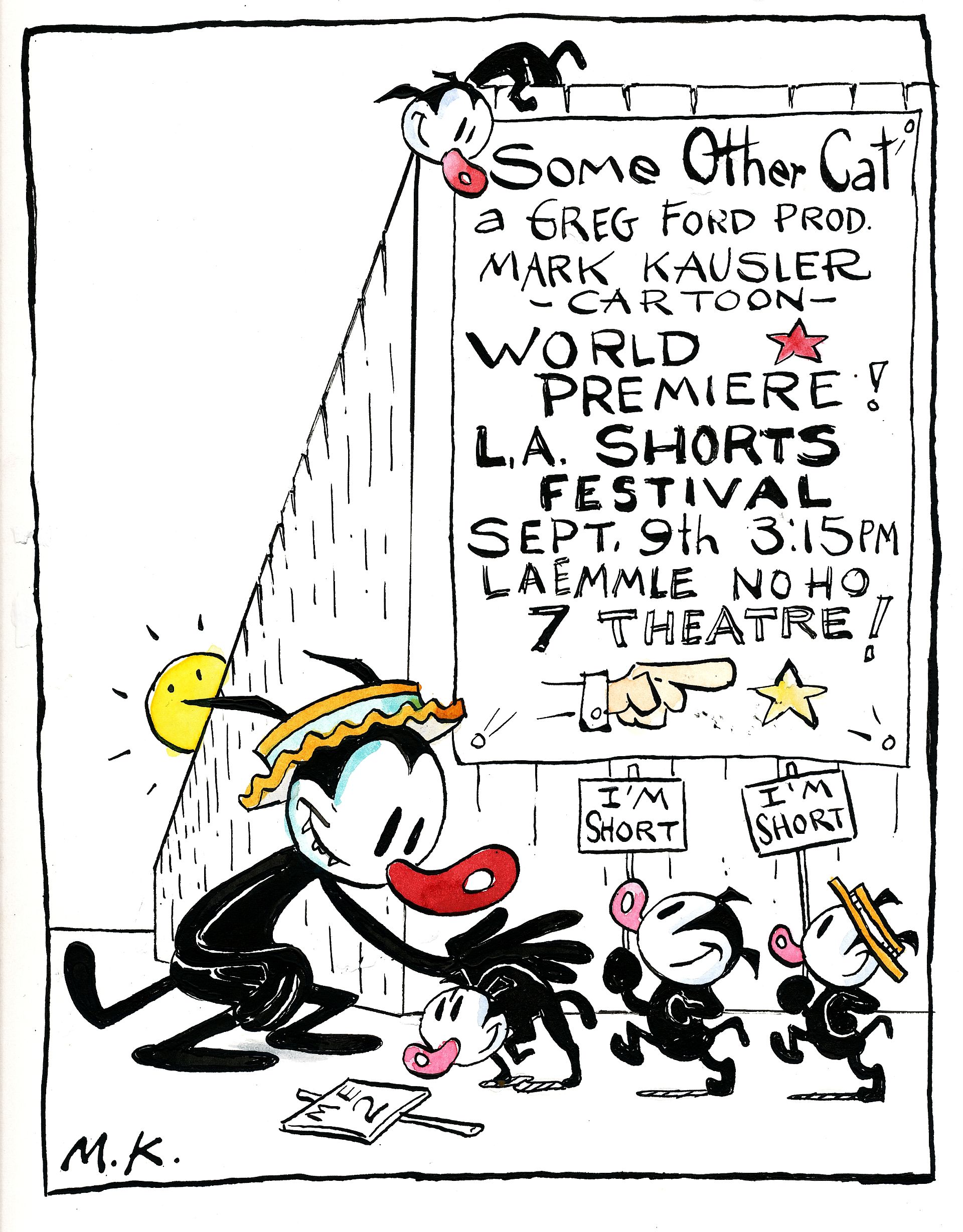 Â Don’t forget loyal readers and Itza Cat fans, that the L.A. Shorts Fest will screen the World Premiere of our new short cartoon: “Some Other Cat” on September 9th at 3:15 PM in Program 22, devoted to animated shorts. This program will screen at the Laemmle NoHo 7 Theatre, located at 5240 Lankershim Blvd. North Hollywood, 91618. Tickets are $12.00, and can be ordered from the festival website; www.lashortsfest.com. Itza will Meow and Hiss just for you! Come out to the L.A. Shorts Fest and cheer him on!

Friend of Itza Cat and Facebook moderator for his website, Charles Brubaker, is asking for your help. He’s making a cartoon short featuring his character, KoKo the Blue, a Junior-sized Witch. I’ve reviewed her comics here in past weeks, and now’s the time to show your support by contributing to Charles’s KickStarter campaign. Here’s the link to the KickStarter site: http://www.indiegogo.com/projects/koko-the-blue-animated-short-film/x/167841Â . This is an unusual cartoon, it will be inked and painted on cels, and shot in Super 16mm! Charles is really swimming against the digital tide, here, folks, so give Cel Animation a boost! Contribute today! 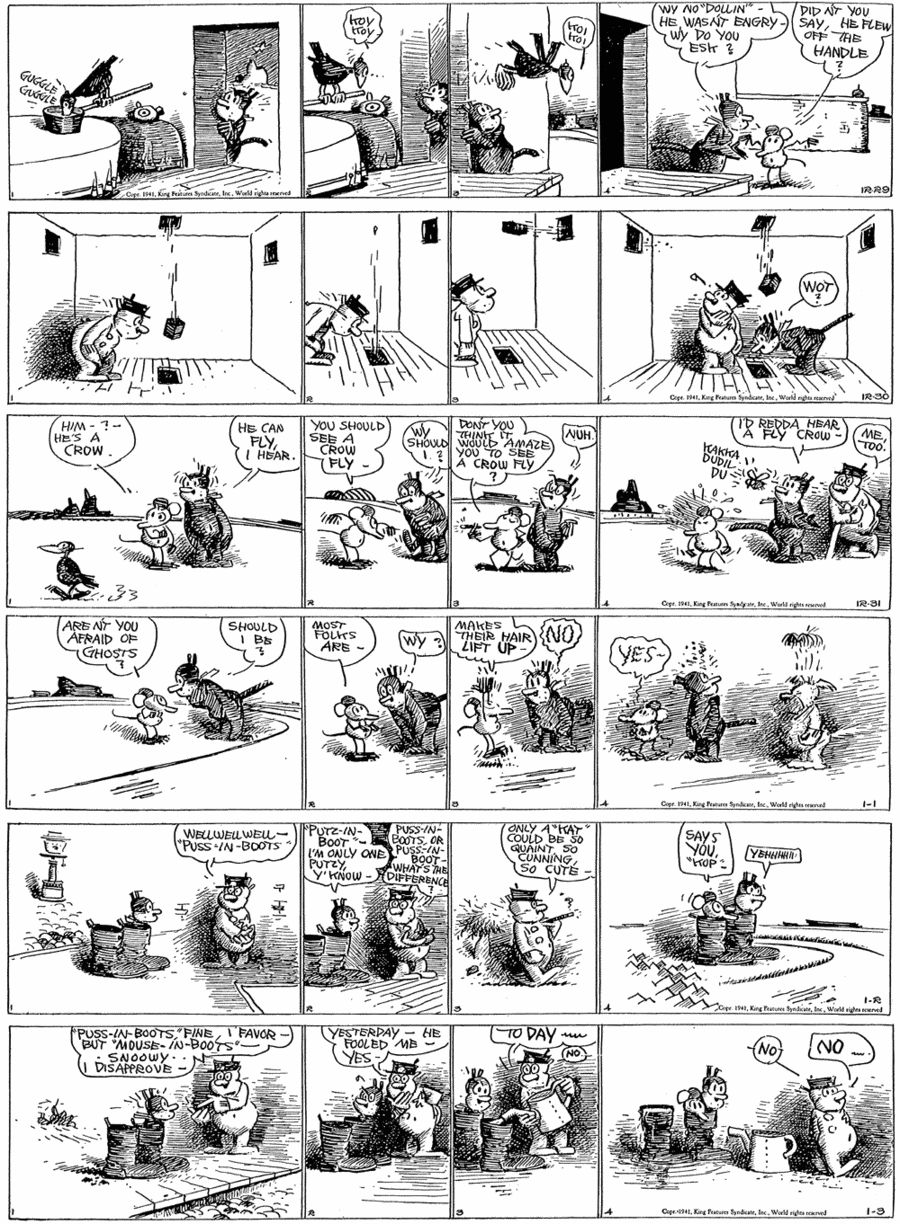 Â Here’s the last of Krazy for 1941 and the first three strips of 1942. I love the way Garge gives the feeling of a boxed-in little stage in the 12-30-41 strip, as bricks fly through the scene south and west. He’s off to a good start to 1942Â with the “Putz in Boot” gags in the 1-2 and 1-3 outings. I like the cozy feeling as Ignatz and KK both pop up in the same boot in the last panel of the 1-3. Remember to click on the strip thumbnails to enlarge them! 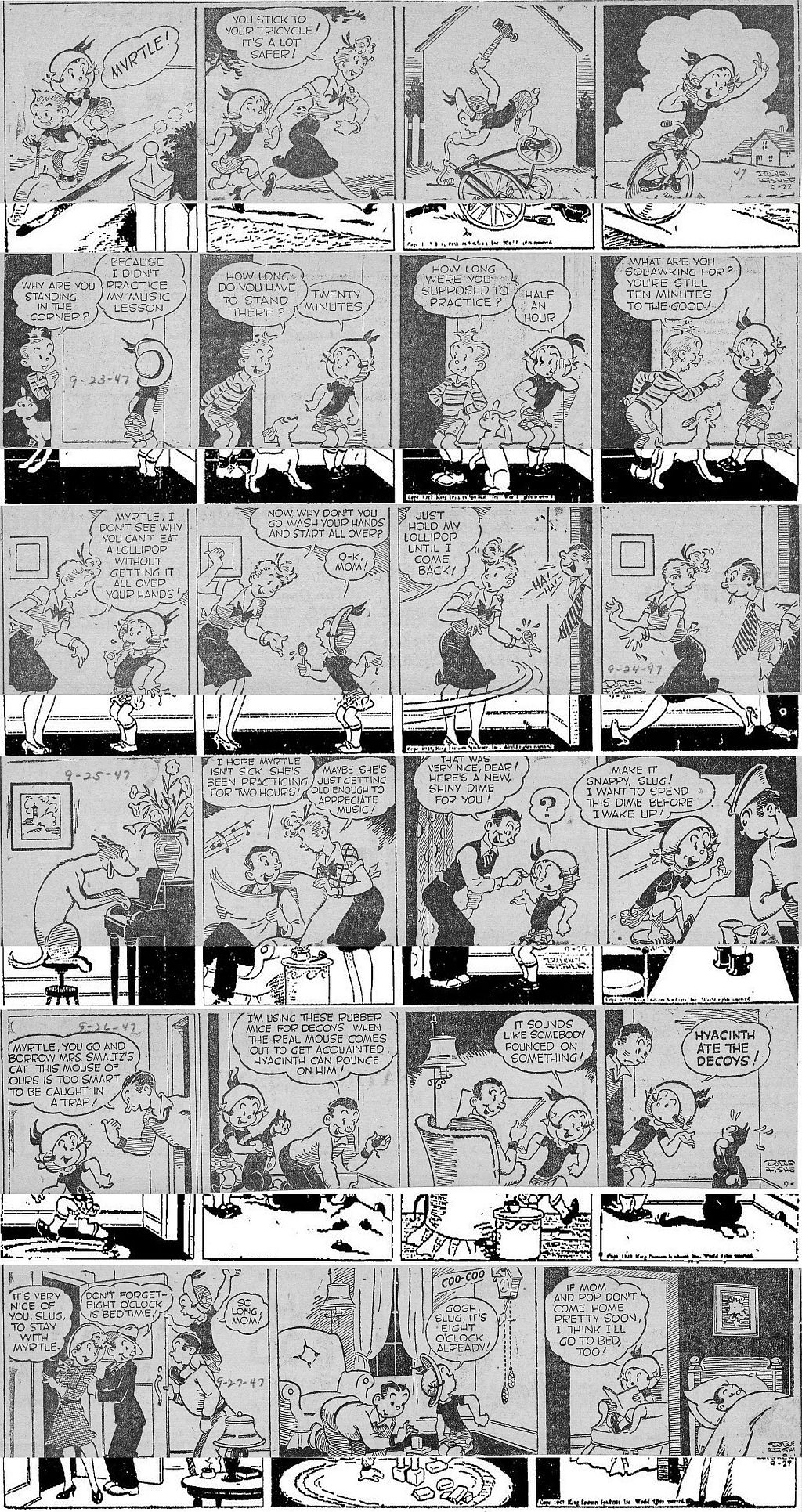 Â Myrtle is in great form this time in the strips from 9-22 to 9-27-1947. Favorites are, the 9-25, as Bingo plays the piano so well, that he fools Myrtle’s parents into thinking that Myrtle was practicing! She gets a dime for her deception, and promptly spends it on a soda. In the 9-26, Hyacinth the cat gets a rare spotlight, in which she eats a whole litter of rubber mice and in the 9-27, Myrtle wears out her babysitter, Slug, who goes to bed while Myrtle sitsÂ up and reads. I’ve pieced these together from my cut-out strips and the Newspaper Archive files. 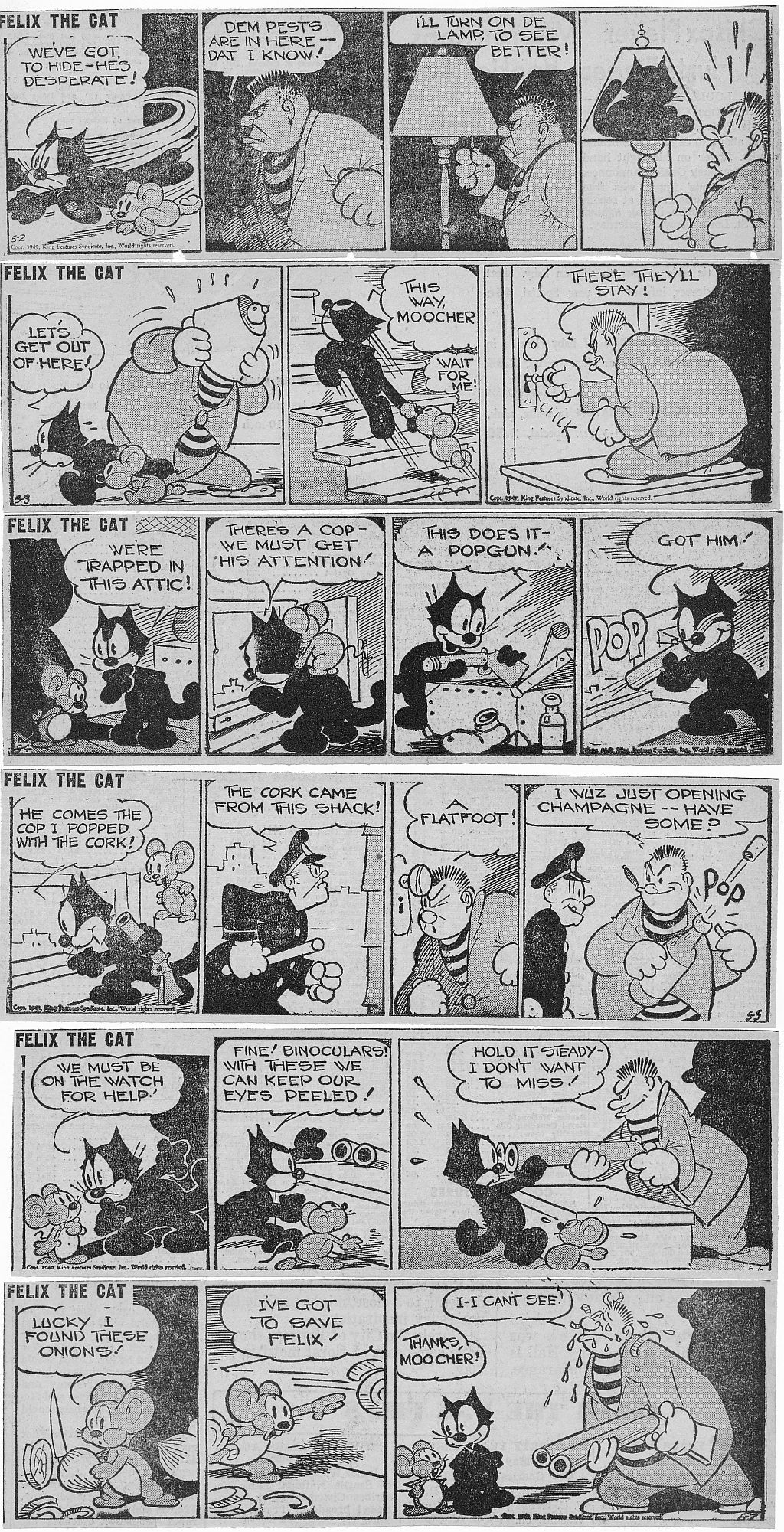 Â Felix from 1949 continues his detective work in the strips from 5-2 to 5-7-1949. I like the implied action between the strips from 5-2 and 5-3, in which the thief discovers Felix and Moocher’s silhouettes when he turns on the lampshade, and the first panel of the 5-3,Â showing theÂ thiefÂ  with the lampshade shoved down over his head, which implies that Felix and Moocher put it there without showing the action. The 5-7 shows the teamwork between the Mouse and Cat, as Moocher tear bombs the thief with onions.

Â The art of Harvey Eisenberg continues to adorn the Yogi Bear Sunday pages from September, 1963. Especially poignant is the 9-8 strip, as Yogi visits Washington D.C. and actually meets John (John-John) F. Kennedy, Jr. The caricature of J.J. looks like it was drawn by someone other than Harvey, as the lines are less bold, and a bit sketchy. A little more than two months after this strip was published, President John F. Kennedy was killed, November 22, 1963. Remember how John-John saluted his father at the Memorial Ceremonies? AndÂ the little boyÂ pictured in this stripÂ was killed in a private plane crashÂ  on July 16, 1999, 36 years later. Make sure you see Yowp’s blog, in which he has already posted the half-page versions of these Yogis: http://yowpyowp.blogspot.com/2013/09/yogi-bear-weekend-comics-september-1963.htmlÂ Tell him Itza Cat sent you! See you in North Hollywood next week!