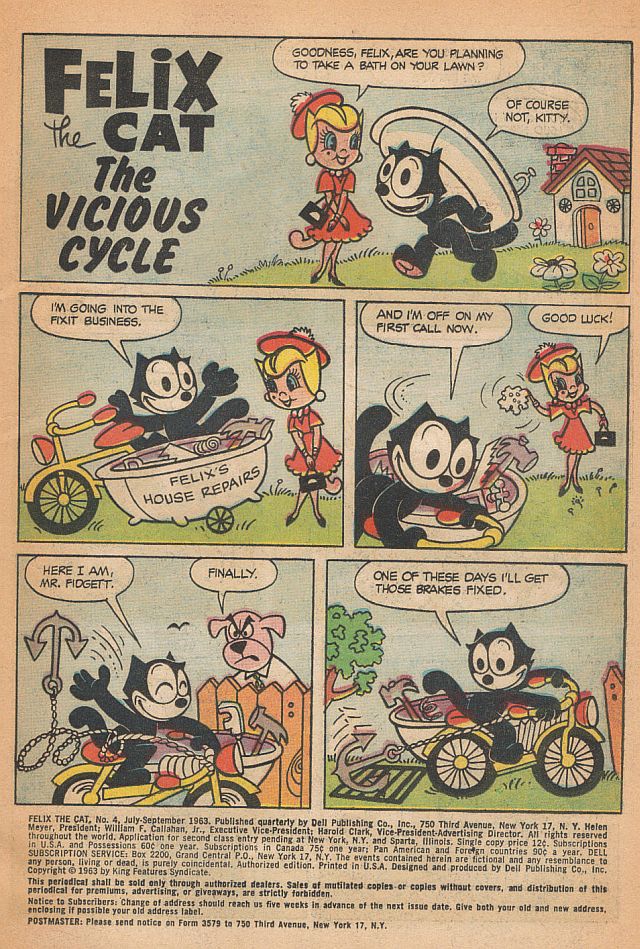 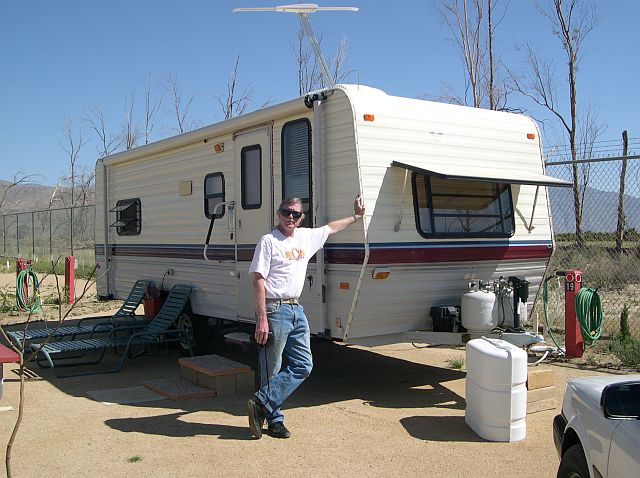 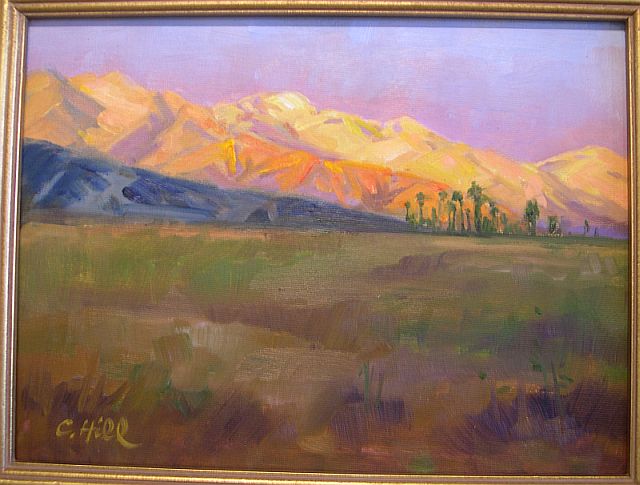 Â  Hi everyone! Cathy and I are back from the Anza-Borrego desert, where we spent Easter week as part of the Borrego Art Institute’s

Plein Air Painting Competition. CathyÂ completed 5 oil paintings duringÂ the week. TheÂ Airstream trailer painting is called “Silver Baby”, and the painting of the Coyote mountains is called “Fireworks At Sunset”.Â We stayed in a “Terry” trailer, on the same property as the Airstream. Cathy fulfilled a dream by painting the Airstream; she is in love with their streamlined design and silvery, shiny skins. Our hosts were Stuart and Bonnie Resor, just great folks; Stuart is not only an architect (dynamite at lettering and drawing), but is an expert in astronomy. He showed me the planet Saturn through his telescope one night, and it looked like the Saturns in an Al Capp swear word! Perfect circle and perfect little ring around it. The sunsets were magnificent! We painted the last day we were there at an old resort, called the Hoberg in the 1950s, The Palms, now. We saw our first live jackrabbits, they were very large animals and their ears wereÂ longer than their bodies! You couldn’t have wanted better Easter Bunnies than these wily desert jacks! They hop very slowly compared with their neighbors, the Cottontail rabbits, which are a lot smaller. It was hot in the sun all week (85 degrees), but cool in the shade, it got downright cold at night. The Terry trailer we rented for the week was small, but beautifully decorated by Bonnie Resor inside. I had to learn a lot of new skills to keep all the pilot lights running, had to make an LP gas run one morning to the hardware store, shades of Hank Hill. The desert culture is so peaceful, the birds sing different songs out there. The wildflowers were in bloom (yellow and violet) and people came from miles around to see them. It was the wettest winter they’ve had in Borrego Springs for years (over 4 inches). If you want to read more about the event and see the prize-winning paintings, go to www.borregoartinstitute.comand find the link to the Plein Air Competition for 2008.

Â Â Â Â  It’s almost the end of the temperate season in Borrego Springs, April is the last month you can visit with 80 degree temps, but the little town and the State Park are worth while seeing. We last visited ten years ago, and the only major changes to the town are the costs of an evening’s lodging in the local motels and resorts! The locals who live through the 120 degree summers are hardy souls indeed. One guy I talked to said he never has to wait in line for anything in July or August, he practically has the town to himself! Only 3000 people live in Borrego Springs year round, so if you like it hot, git out thar!

Â Â Â Â  This week’s comics are Marvelous Mike, May 7th through May 12th, 1956. Mike continues to baby-sit the lummox dog, Goliath. Too bad Goliath’s so hard to see! I have also put up the first two pages from Jim Tyer’s Felix the Cat #4, 1963. “Chairman of the Bored” features Pussyfoot in a one page b/w gag, he’s looking pixillated and more Tyer extreme! “The Vicious Cycle” also begins this week, an eight page story, page two next week. I will also tell you the story of our latest visit toÂ the late Mike Rubel’s castle in Glendora next week as well. Remember, if you would like to leave a comment, send it to molasses@earthlink.net. If it is an interesting comment, it will be posted. 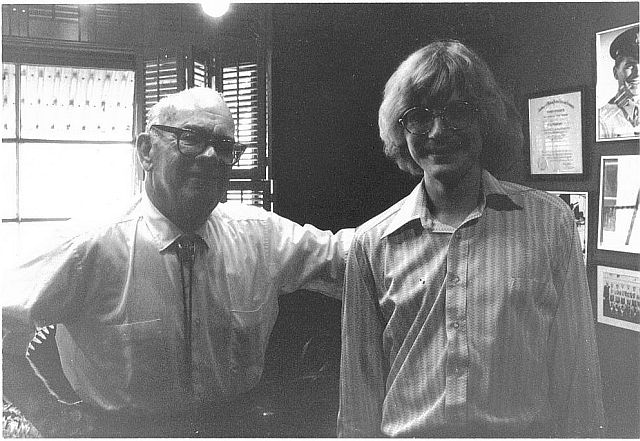 Hi folks, that old b/w photo at the top is of Tex Avery andÂ me in 1969. This was taken at his office at the old Cascade Pictures studio on Seward St and Romaine. Seward is where an animation museum should be located, what an historic spot! Â Walter Lantz, Walt Disney, Hugh Harman, Rudy Ising, Bob ClampettÂ ,Â Tex Avery and Gabor CsupoÂ all made pictures on this street. I used to visit Tex at Cascade every once in awhile hoping to pick up free-lance work, but he never used me.Â I was a pretty gawky stringy kid in those days, but Tex put up with me. I think he could tell that I was a really devoted fan. Sometimes Tex let me hang around the studio until the early evening watching him shoot a Pillsbury doughboy commercial. Tex actually manipulated the puppet frame by frame! He could do almost anything in animation. Tex was developing a pilot for Playboy at the time I met him, animating gag cartoons from the magazine in short film vignettes. They were very limited animation, and unfortunately, didn’t really plus the humor in the original magazine cartoons they were based on by very much. Tex had already done most of the Raid and Bugs Bunny Kool-Aid spots that were so popular by that time, so now he was just trying things to bring in business to Cascade. I think that’s aÂ picture of Ronald Reagan onÂ Tex’s officeÂ wall at the extreme right hand side of the photo. I remember Irv Spector visiting Tex one day at Cascade. Tex seemed to have a lot of respect for this Easterner and gave him a big welcome. I don’t know if Irv was anymore successful than I was at picking up work from Tex, however.

This post’s comics are MARVELOUS MIKE from 5-1-56 to 5-5-56. I am missing April 29th, the Saturday episode, and May 6th, another Saturday. This is a new storyline introducing a pesty dog, “Goliath”. Unfortunately, the Post-Dispatch assigned a color to Goliath that renders him almost invisible in most of the strips, but bear with me. If anyone can supply missing Mikes, please write me at : molasses@earthlink.net. I also have finished reprinting the Jim Tyer Felix story: “You Auto Be In Pictures” from Felix #3. Jim’s style has been a bit subdued up until now, but he really busts loose in Felix #4, coming soon. Hope the bunny brings you all some nice healthy DARK chocolate, full of antioxidents, for Easter. Gotta Hop-a-long now, Cassidy!

Hi Folks, I’ve been a prodigal blogger again. It’s starting to dawn on me that writing a blog is kinda fun, but MANAGING a blog is like presiding over a remedial classroom, a classroom the size of the WORLD! In other words, the comments have been hacked. I have had to turn the access to the comments off from all un-registered people. However, I don’t know how to turn the registration process ON for those who wish to participate in a reasonable way. In the meantime, please communicate with me by my special email address: molasses@earthlink.net. I will manage comments from there. I will keep reminding readers to use this address in future posts, also, don’t forget to click on the small images you see on this page to see larger versions of them.

The MARVELOUS MIKEs this week are from 4-23-1956 to 4-28-1956, the Felix pages are from Felix #3, the next two pages of “You Auto Be In Pictures” by Jim Tyer. Cliff Crump is so astonished by Mike’s ability as a painter that he winds up in the police station!Â  Of course, allowing for today’s inflation, “Whistler’s Father” would now command a price of fifty grand.Â  Felix drives Mr. Mogul’s Alpha-Ravioli luxury car down to the power train in this week’s pages. You can easily feel what these pages would look like moving in Tyer’s animation style, lots of flying debris and staggered contacts as the Alpha-Ravioli falls apart, with those little black lines that break off and whirl around.

Cathy and I went to paint at Eaton Canyon in Pasadena last Thursday, March 6th. It was ideal weather down there, not much wind andÂ plenty ofÂ light. Cathy did a great little 9″ by 12″ oil painting of a sycamore and an oak tree side by side. The sycamore was a warm white and the oak tree was in dark raw umber, topped by accents of orange leaves and a faint suggestion of violet mountains in the distance. Not so long ago, Cathy wouldn’t even TRY to paint an oak, they present too great a challenge in value and detail, but now she’s fearless. I titled her painting, “The Finish Line”, as the trees resemble a horse race, with a white and a black horse in a photo finish. I think she liked the idea. I still haven’t learned how to edit a complex environment like Eaton Canyon in watercolor and I produced a real mess. When that didn’t work, I made two MORE messes! It was one of those days when you just want to chuck all the paints in the nearest waste can and swear off! I didn’t put the garbage into the critique at the end of the session, not worthwhile.

I think I have seen just about all the Tex Avery MGM cartoons complete now, I finally saw the uncut GARDEN GOPHER. This one has a scene which is always faded off prematurely. Spike puts a big can of dynamite over the Gopher’s den and lights it. In the meantime, the Gopher pours a slippery pool of grease under Spike’s feet. When Spike turns to run, he can’t get traction in the grease and is caught in the explosion when the dynamite can blows up. ThisÂ is where the action always fades out, in the middle of the explosion clouds. In the original, the clouds clear and Spike is burnt black, (with big lips and spit curls, natch) and running on the grease, VERY SLOWWWWLY.Â  It’s a black stereotype gag, but it is also animation based, going from a fast run pre-explosion, to a slow run, after the blast. It works on two levels at the same time, the Stepin Fetchit reference, and the natural drag that being blown up has on the dog’s body.Â  I will admit that I laughed, but I love Tex’s humor. I used to write Tex fan letters when I was a kid, sent in envelopes illustrated with my crude drawings of Screwy Squirrel, to which he never replied. Â When I met Tex years later at the Cascade Pictures studio on Seward St., I reminded Tex of those letters, and asked him why I never heard back from him. He told me, “If I got letters from anybody with Screwy Squirrel on ’em, I’d pitch ’em in the wastebasket!” I have a few more little stories about Tex, but I will save them for another post.