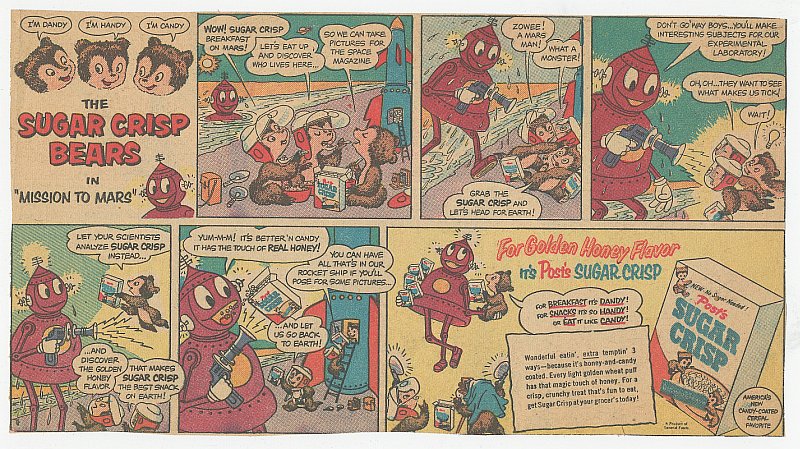 It’s been cold and very wet here in old Glendale this past week. Let’s look at some dry comics, shall we? This Sugar Crisp ad is posted (Post’s) by request of old friend Marc Schirmeister. He wanted to see the original bears, Dandy, Handy and Candy, before they were merged into the singular Sugar Bear we know today. This was clipped from a Boy’s Life comic section of the mid-1950s. The bears encounter a Martian robot and are lucky that he likes Sugar Crisp. This was before “sugar” became a dirty word in cereal-land, now the product is called Golden Crisp. Rosemary Clooney had a hit record for Columbia of “Dandy, Handy and Candy” in the early 1950s, which was about the home life of the bears, maybe I’ll link to it next “Post”.

Felix is from 8/17 to 8/23/1936 this time. Danny Dooit is determined to rough it by camping in the woods with Felix. Snobbs and Socky follow Danny and his cat around with treats and luxuries, embarrassing him. In the 8/22, Danny and Felix encounter a Messmer elephant as they try to sneak off into the woods. I love Messmer’s elephant drawings. The 8/23 Sunday page punctures Snobbs’s dignity as he takes a dip in the old swimmin’ ‘ole on his “awfternoon h’off”.

Krazy this week is from 2/5 to 2/10/1940. No real continuity this week. I love the Kat Langwitch in the 2/8, Krazy mangles the names of famous men, “Watchin’ Ton”, “Cizza” and “Hanna Bill”, remarking on their “crossmints”. Then the famous Chicken Who Crossed The Road shows up to deflate K’s hero “wort-ship”. The Chicken makes a repeat appearance in the 2/10, note the elegant little umbrella Krazy’s carrying in the last panel. 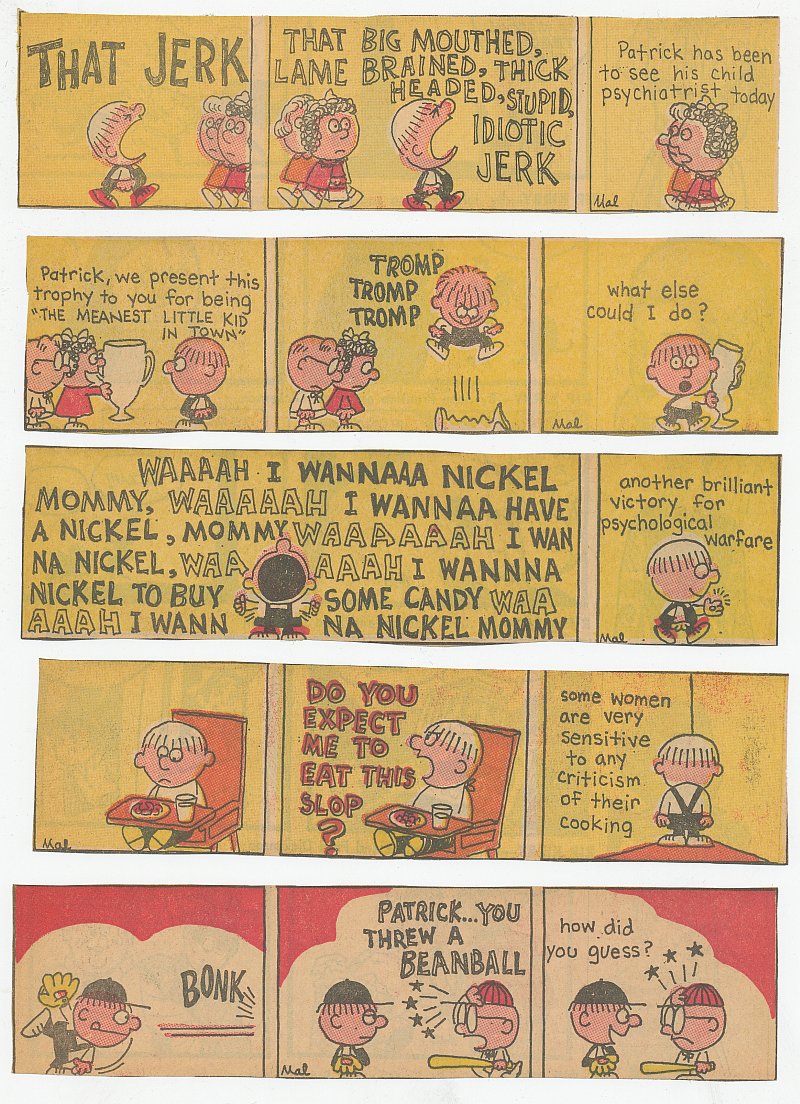 Patrick this week is from 11/8 to 11/12/1965. Panel two of the 11/8 almost looks like a Schulz drawing if you don’t look at it carefully. Patrick is no Charlie Brown, however, he is a master of psychological warfare and is a really “mean” baseball player. He’s a funny character, but ultimately doomed to a short run in the newspapers. Being a real mean little kid is a bit one-dimensional and it’s tough to sustain a run of years in a comic strip without a sympathetic character. Until the next time, don’t leave any newspapers out in the rain.

To start outÂ  this time, Felix dailes and Sunday from 8/10 to 8/16/36. Doin’s at the Dooits continue, as Felix is constantly put out and taken in. The 8/13 has a funny finish as Mr. Dooit is banished to the dog house by the Mrs. for burning a hole in her beautiful rug. “Move over, Cat,” says Mr. Dooit to Felix in the final panel. 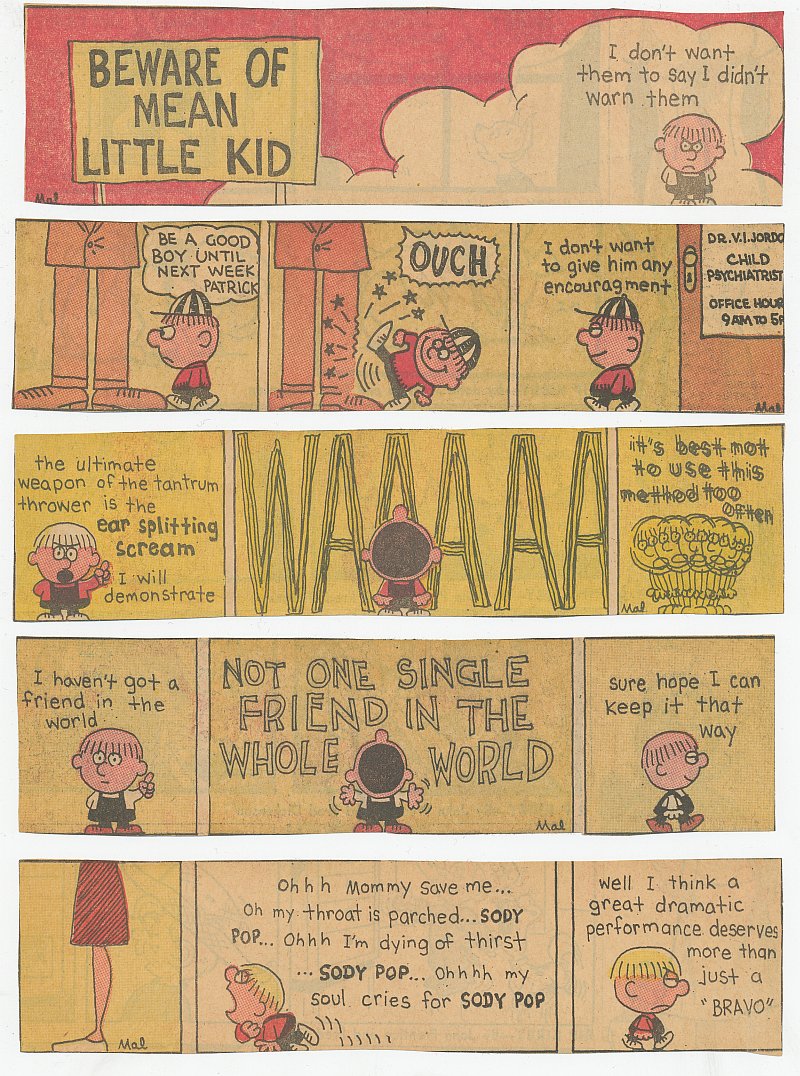 Patrick by Mal Hancock is from 11/1 to 11/5/1965.Â  Patrick is such a cynical little kid, witness his attitude toward friends in the 11/4, “Not ONE SINGLE FRIEND IN THE WHOLE WORLD, sure hope I can keep it that way…” This almost feels like a W.C. Fields line. My friend and reader Jerry Beck likes the “Patrick” strip so far, keep readin’ Mr. Beck! By the way, the reason there are five instead of six dailies in this collection, is that my Dad didn’t work on Saturday, so he didn’t bring home the evening Post-Dispatch that night. Hence a lot of my clipped runs don’t have the Saturday episodes, I was too poor in those days to buy any papers for myself. So far there have been about 20 hits on my recorded “stories”. Not an overwhelming response, but better than no listeners at all. I’ll try to do another one maybe next month.

If y’all can lay off the spirits long enough to read my blog, here’s the last of my Webb Smith articles from Aug. 21st, 1927 called “Premier Foils Sol on Sword”, originally published in the Los Angeles Examiner.

Felix is from 8/3 to 8/9/1936 this time. Snobbs the butler’s troubles with Mrs. Boo’s baby continue, and Felix goes fishing with Mr. Dooit. The Sunday 8/9 page is beautifully drawn as Socky the bodyguard gets in to the act, punching out Joe the Tailor, who has to prove his identity the hard way!

Krazy Kat is from 1/22 to 1/27/1940 this time. Mrs. Kwakk-Wakk and Ignatz fool around with the pun: “You Can’t Shoo (shoe) a Horsefly”. This same line was used in the Max Fleischer Color Classic of 1940, “You Can’t Shoe A Horsefly”, featuring the song of the same title by Sammy Timberg. My guess is thatÂ the gagÂ was started on radio in 1939! The next two days are taken up by a visiting ventriloquist who makes eggs and bricks talk, and then some brick gags. Ignatz gets a rare sock on 1/26. 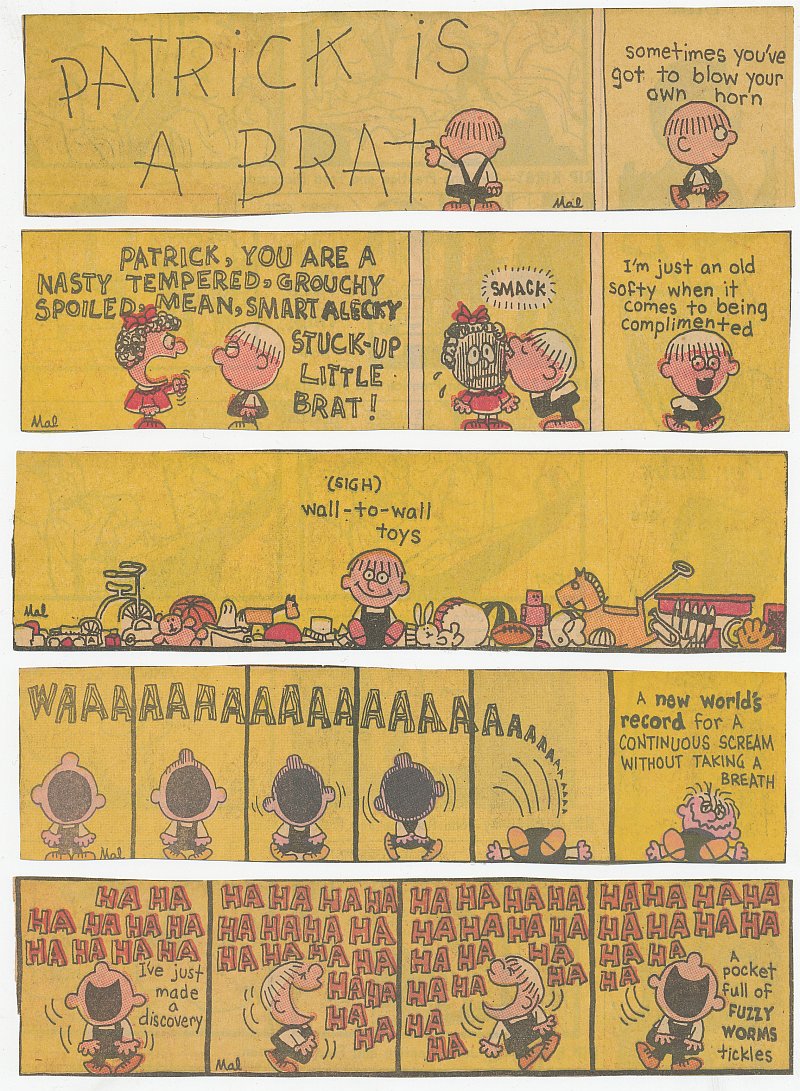 Here are the first 5 “Patrick” daily strips by Mal Hancock, carefully cut from the St. Louis Post-Dispatch by yours truly. These are almost certainly from 1965, 10/25 to 10/29. Mal Hancock drew several daily strips, Patrick was the second one he did, it lasted until 1969. I thought of it as the “Anti-Peanuts”, Patrick was mean and maladjusted and proud of it. I love the cartooniness of the drawings, and how Hancock uses lettering as almost another character in the strip. Mal or Malcolm Hancock, was born in 1936 and died of cancer in 1993. He suffered an accident as a teenager which paralyzed him from the waist down. He evidently was in quite a lot of pain throughout his short life, which may have influenced the sardonic tone of his humor. He was best known for his magazine cartoons for the National Review, and other magazines. This shows what the Post-Dispatch comic section did to a lot of the dailies; they printed them in color! I spent a lot of time (too much time) cutting these out and storing them in envelopes. At least you can see them in good scans and in color this way, instead of (ugh)Â  microfilm!

Hey Folks, it’s story-telling time once again! I thought I’d kick off 2010 by telling you one of my favorite stories from the book “Short Stories for Short People” by Alicia Aspinwall. Alicia was a great fantasist, and unjustly forgotten today. “Short Stories” was published in 1896, and was in it’s 24th printing by 1929. The story I will read to you is called “Tula Oolah”, the story of a tiny elephant that Celia and Soft-Eyes the seal found on the beach. (Original illustration by Marie L. Danforth):Â 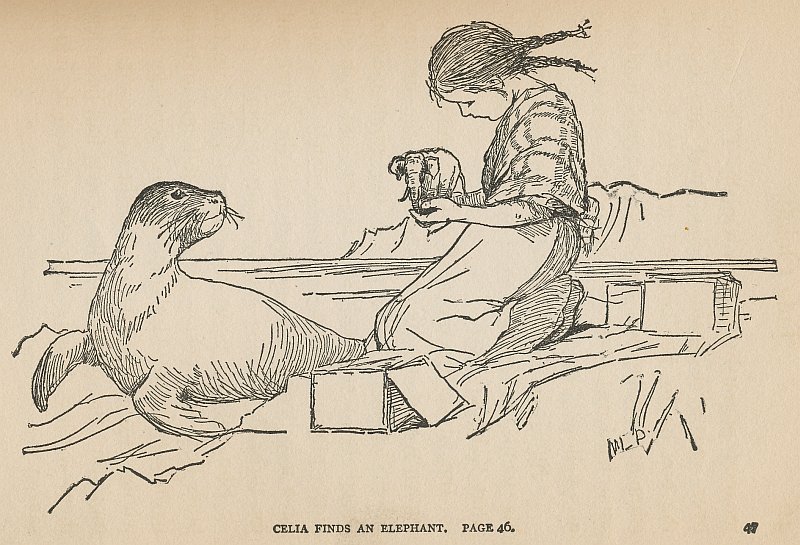 Â This is my clumsy way of trying to preserve the oral tradition in story-telling. Our world is so media-cluttered that I fear we are losing our ability to just sit down with each other and tell stories. I have so many favorites that will never have a chance to be filmed or animated, so maybe I can spark your imaginations in this way. “Short Stories for Short People” was introduced to me by ourÂ beloved Bristol School (Webster Groves, Mo.) librarian, Miss Bedell. Â Miss Bedell read to us, as I remember, several times a week in her magical school library in a special period, usually at noon. She didn’t teach a class formally, but just tried to give us a love of literature. She was a stern, strict disciplinarian who ruled by sharp looks and aÂ commanding voice. She oftenÂ stayed after school, re-binding the books herself with special cloth and glue. Her indoctrination into books didn’t quite work on me, I love literature, but it’s mostly antique juveniles that fill my cup with joy. How many of you remember collections of stories like “Told Under the Magic Umbrella”, or Andrew Lang’s “The Blue Fairy Book”? I hope you enjoy “Tula Oolah”, I’ve recorded it with a new digital microphone, with as few mistakes as possible: http://www.zshare.net/audio/707198640d964d03/.