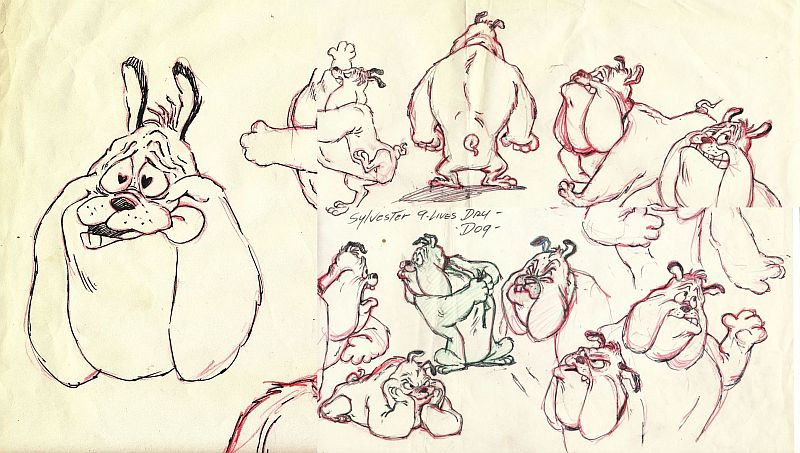 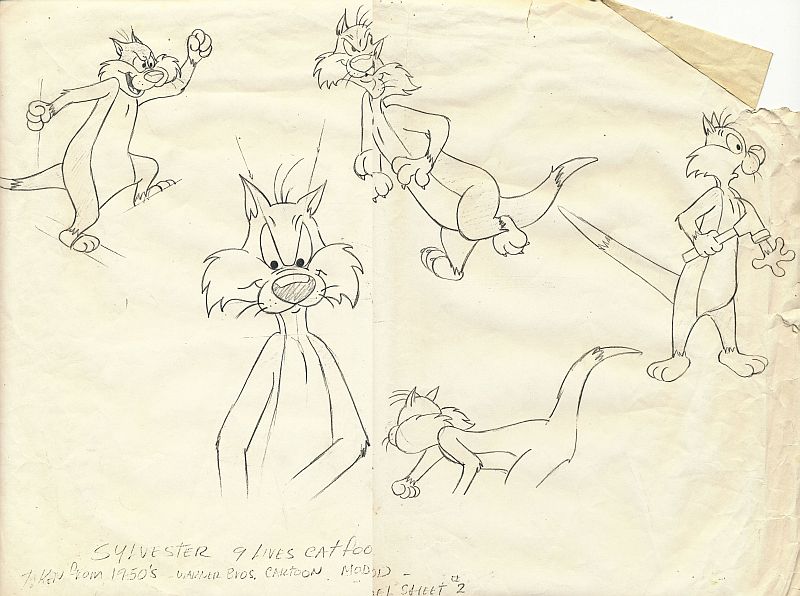 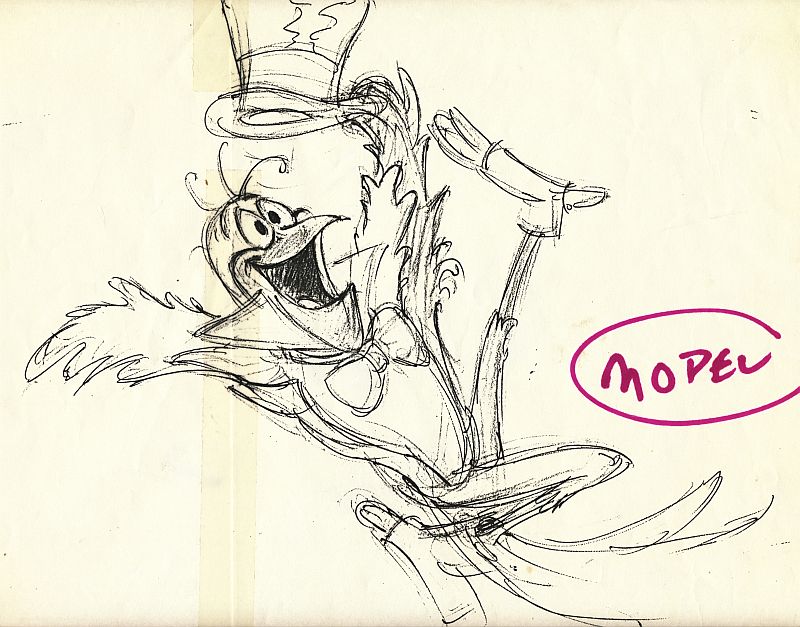 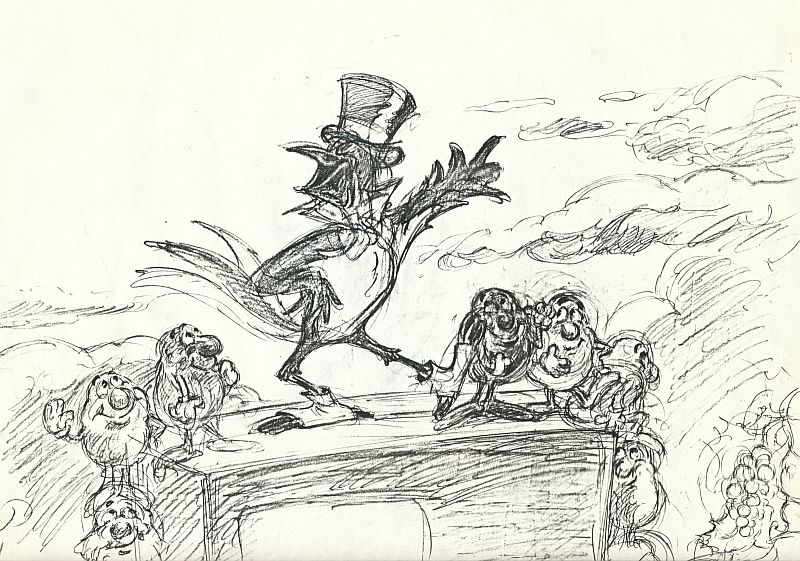 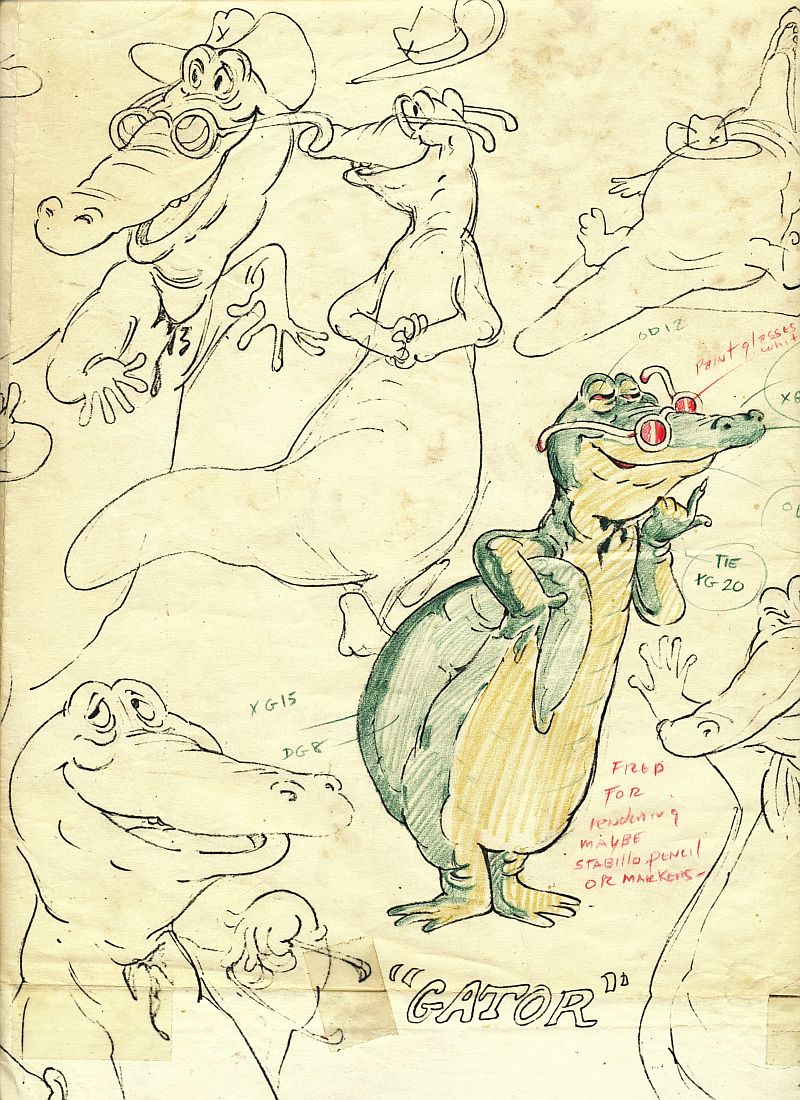 My old friend and “Drawing God” Cornelius Cole III, passed away August 8th, 2011. I’ve known Corny so long that I can’t remember exactly when we first met. I could have seen him for the first time picking up freelance layout from Fred Calvert, but I remember him best from the old Duck Soup Produckions studio on Main St. in Santa Monica. Corny had his own little studio on the same floor with Duck Soup which he called “Corny Films”. I think that Duane Crowther was his business partner for awhile. I’ve reproduced some of the model sheets and drawings that Corny produced for Duck Soup and Murakami-Wolf Films in the 1970s and 1980s. Duane directed a whole series of Nine Lives Dry Cat Food commercials with Sylvester the cat. Corny did the models for the spots on Sylvester and Marc Anthony (the bulldog). He did the rough models in ball point pen and clean ups in graphite. Corny could work both rough and tight, but he preferred rough. Corny always worked with an inking board in his lap, never on a light board. He preferred to do layout that way. Duane and Corny would sometimes fight over Corny’s 3 and 4 field pan layouts for the Sylvester and Froot Loops commercials. It seems Corny had a hard time drawing within a 12-field cut-off and let his pen range far outside the field to the right and left, sometimes even north and south! Corny would attach little pieces of paper to the top and bottom of an animation sheet to allow for his lines to escape the bonds of the field edge. We who had to animate to these layouts would often have to reduce the drawings mechanically so that they WOULD fit within a 12 field TV cut-off. The compositions looked a bit patchy sometimes after we got through making them fit. Also, Corny usually drew his layouts in ball point pen, with a lot of lines. We animators had to boil down all those beautiful pen lines down to one, hard, unforgiving graphite line for our character drawings. They never had the liveliness of Corny’s original drawings, but we had to have a good line for Kunimi, the great Duck Soup inker, to work from. (Kunimi was such a good artist that she could take a “pen haystack” like Corny or Duane would draw, and make a beautiful single line cleanup from the rough, right on cel!) The mockingbird that you see upstairs with a top hat was designed for a Kellogg’s Raisin Bran commercial, those little blobs in the layout are raisins. The Gator character was a Corny Cole design for Fred Wolf. I’ve forgotten now which product it was for, but Fred really liked this character, it lasted for several commercials. Here:

is a rooster character that Corny designed for a Duck Soup Froot Loops commercial. He was an inventor with a German accent, loosely patterned on Albert Einstein. It’s a good example of Corny’s rough pen style. We had a good time trying to animate overlap on the very loose shapes that Corny drew for his comb.Â  Corny loved to tell stories about his time at Warner Bros. with Chuck Jones. Many of those stories can be read over at Michael Barrier’s website, look for his interview with Corny. Corny especially liked telling me about the Daffy Duck storyboard he fashioned for Chuck, which the great director rejected, saying “this is notÂ MY Daffy Duck.” Corny disliked the lofty tone of this remark and told Chuck where he could shove his Daffy Duck. Corny always praised Friz Freleng’s timing and downgraded Chuck’s. But evidently, he reallyÂ admired them both, judging from the interview. Corny always was trying to loosen up the atmosphere at whatever studio he was working for. At Duck Soup, he frequently lured the animators out into the Santa Monica surf for a body surfing lesson. I went along for one such outing with Bob Seeley, Mel Sommer and a few other folks and swam a bit out to sea with Corny leading the way. I tried to float in on a wave, but when it hit the sand, I was tumbled about like the rinse cycle on a high speed washing machine. I emerged from the surf, with quite a few cuts and gashes through my skin. Corny laughed at my extreme surfing naivete, but did it in a sympathetic way. This is my best memory of Corny, he was a regular guy, but he was never lofty, never authoritarian. There was a real warmth to the man, he was just great to be around. He drew so well that he could fit in to any studio, any production. He was still teaching drawing at Cal Arts up to the time he left us. A few years ago, at a 2005Â Annie Awards ceremony, I saw Corny for the first time in many years, sitting in the audience. He said “hello”, almost as if it had been 10 minutes since I’d seen him last, not nearly 10 years. I couldn’t help noticing how slowly he walked up to the stage to receive his Winsor McCay award. The great surfer had foot trouble, according to Bob Kurtz. It was a real thrill to see Corny be recognized by his peers for what he did best, draw! Corny was never too reverent about the animation industry, and never held cartoons in very high esteem. He loved fine art. You know, I don’t know if I ever saw any oil paintings that he produced, so I don’t know what his grasp of color and light amounted to, but I always loved his detailed figure drawings. The poses always were full of action, seeming to fly through the air over the great space of the long pieces of paper that they were drawn upon. Corny made a few animated films of his own, including a great anti-Richard Nixon piece that he worked on for over a decade. I hope the family takes good care of his films and drawings. Please don’t turn them over to the ASIFA archives! We need to remember Corny for a long, long time.

Felix (from 2-18 to 2-24-1935) is an accidental underwater explorer this time. In going after Danny’s camera, Felix punches out a Carabuda fish which swallows the valuable instrument. When Felix and the fish are hauled up, the Captain develops the film and finds some photographs of sunken treasure ships. Some of the crew descend for another look in a diving bell, and the fish remark that it’s good to see humans in a globe for a change. In the Sunday, Felix continues his adventures in Dreamland, and the King of Dreamland pulls several mean tricks on the little cat to try to wake him up. I wonder if McCay contemplated a lawsuit over this story?

Krazy (12-30-1940 t0 1-4-1941) is for vegetarians this time. All the gags are about cucumbers, chili peppers, bell peppers and topped off with an eggplant gag in the 1-4. The 1941 strips came from a different source than the 1940s and are arranged vertically. I think the strip looks good either way, but I prefer the horizontal layout, preferably 8 columns wide, which I can’t do on this dad-blasted computee! 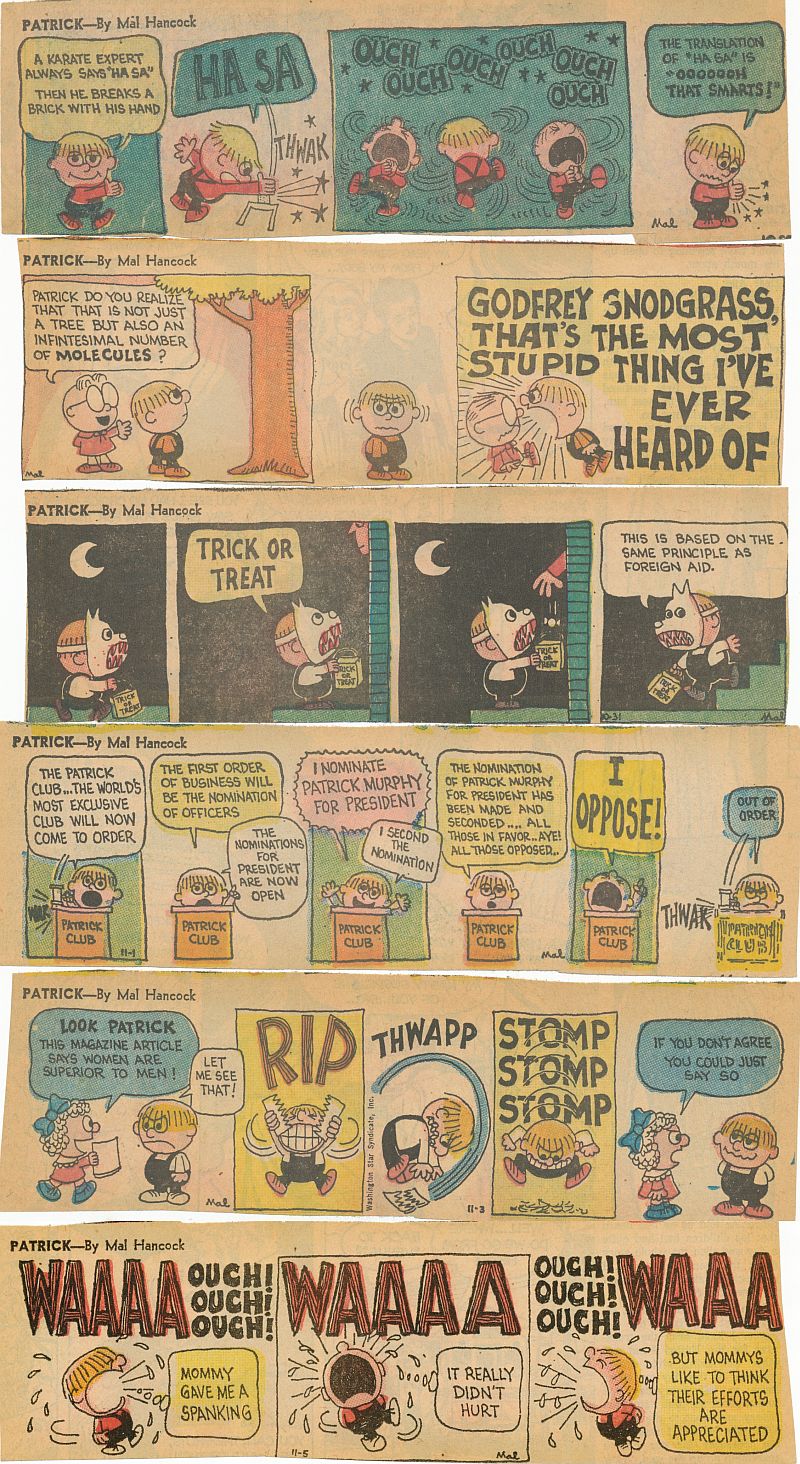 Patrick (from 10-28 to 11-5-1966) has a reference to the Hanna-Barbera cartoon, “Quick Draw McGraw” in the 10-28. Patrick steals Quick Draw’s signature line, “Ooh, that smarts!” You will notice that the Post-Dispatch starts printing the dates on the Halloween and subsequent strips. Now I won’t have to speculate so much on the days these were originally printed. I love the acting that Patrick puts on for his Mommy’s benefit in the 11-5. Enjoy the comics, my readers! I will write again soon. 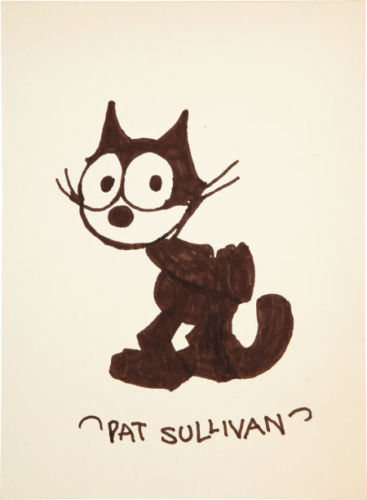 I’m not neglecting Cats for Bears, just did a special post for Yowp’s blog last time. Here are the Felix strips from 2-11 to 2-17-1935. The tough sailor’s name turns out to be “Tuffy Spinaker”, and he turns out to be a forgiving sort, rewarding Felix and Danny for saving him from the Octopus. Last week, the Octopus had “feelers”, this week it’s “tentacles” (see 2-11). Felix is fooled into thinking the Sargasso Sea is a patch of land in the 2-16. In the Sunday page, Felix solves his “Little Nemo” problem by taking a draught of the Rip Van Winkle potion. He’ll be in Dreamland for twenty years now, or maybe not.

Krazy is from 12-23 to 12-28-1940 this time. For the first two days, Offissa Pupp manages to suppress Ignatz’s reactions to Krazy’s bad puns, but KK gets a Christmas Brick in the 12-25. I’m not sure to who Pupp is referring in the 12-27, when his visitor asks him who should be in the Jail besides “mice”.Â Is Pupp referring to Mrs. Kwakk-Wakk, who beats a hasty retreat in the last panel, or Krazy, or ?? If it IS Mrs. Kwakk-Wakk who is potential Jail-bait, what has she done that’s against the Law? She mainly gossips and is a busybody. In the 12-28, Ignatz puts himself in Jail, as Offissa is suffering from gout, perhaps he had too much Christmas cheer. 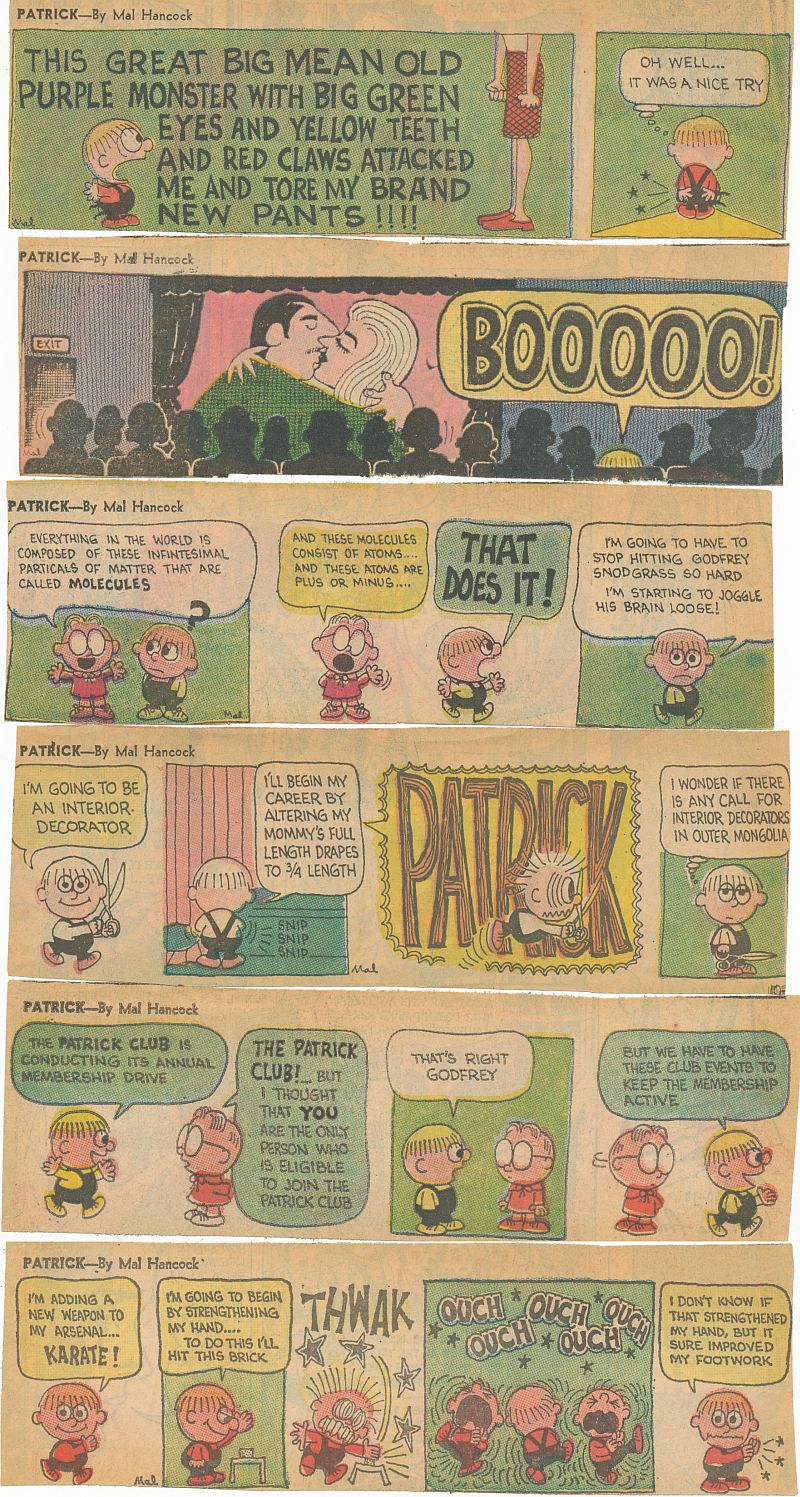 Patrick is from 10-20 to 10-27-1966 this time, with a strip or two missing. Patrick’s behavior in the movie theater in the 10-21 was probably considered eccentric back in 1966, but today with all the cell phone and texting going on, probably no one would notice. I like the “animation” in the fourth panel of the 10-27 as Patrick practices Karate.Â  I’ll try to post more often this month, now that my energy is coming back. See you soon!

An Answer To Yowp 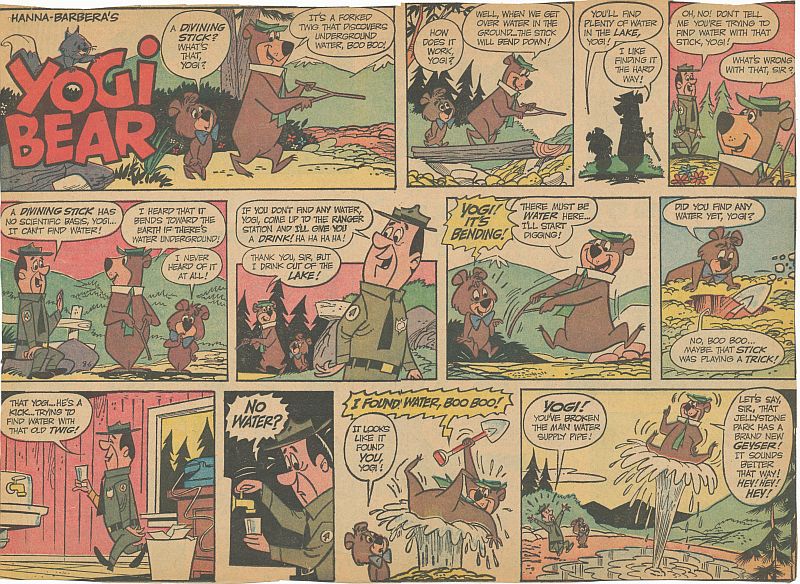 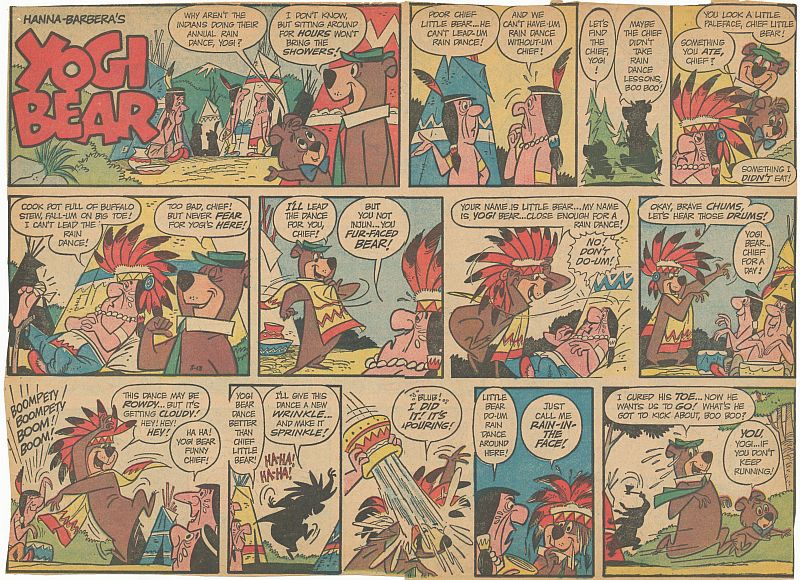 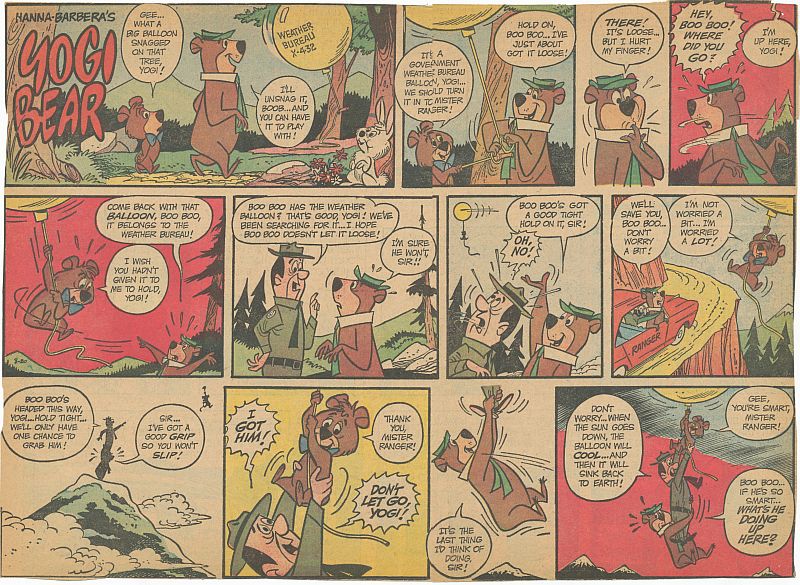 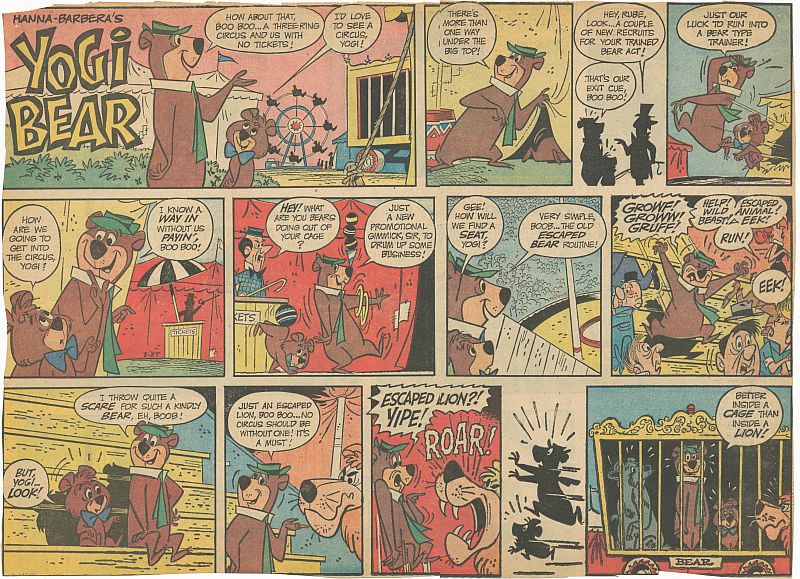 Well, here’s a “special extra” post, y’all! I really love Yowp’s blog, which is in my blogroll at the right hand side of this page. The cartoon dog does a unique and well-researched blog devoted to the early TV programs of the Hanna-Barbera studio. These cartoons, especially, Huckleberry Hound, Yogi Bear and Quick Draw McGraw were well-loved by my brother and I back in the late 1950s and early 1960s when they first aired on St. Louis television. The subject really doesn’t “fit” the Catblog, which is devoted to early animated cartoons and comic strips of the 1930s and 1940s for the most part (except “Patrick”). At the risk of incurring the wrath of Yowp (and getting dog-bit), the Cat dug into his files of old comic strip clippings and came up with the Yogi Bear Sunday pages of 8-6, 8-13, 8-20 and 8-27-1961, of which Yowp couldn’t find good copies for the current post on his blog. Here they are, the original half page versions in color, drawn by the late, the great Harvey Eisenberg, one of theÂ most accomplishedÂ cartoon draughtsmen of animation (and comics). He was the layout man on most of the best Tom and Jerry MGM cartoons of the 1940s, and starting in about 1947, started drawing comic books, first the “Red Rabbit” and “Foxy Fagan” books, co-produced by Joe Barbera. Then Harvey took over the “Our Gang with Tom and Jerry” comic book for Dell, and did the lead Tom and Jerry story artwork, and illustrated a lot of other stories in the book, such as Droopy, Spike and Tyke, The Adventures of Tom and even Flip and Dip on rare occasions! I’m not going to make this a long-winded screed, but I’ve offered Yowp help with the Yogi Bear Sunday pages he posts from time to time, and Yowp just growled and wasn’t having any. This time I couldn’t resist posting these strips which I cut out of the St. Louis Post-Dispatch in that friendly year of 1961. Enjoy, if you can, and Yowp, down boy, I hope you will enjoy them too!