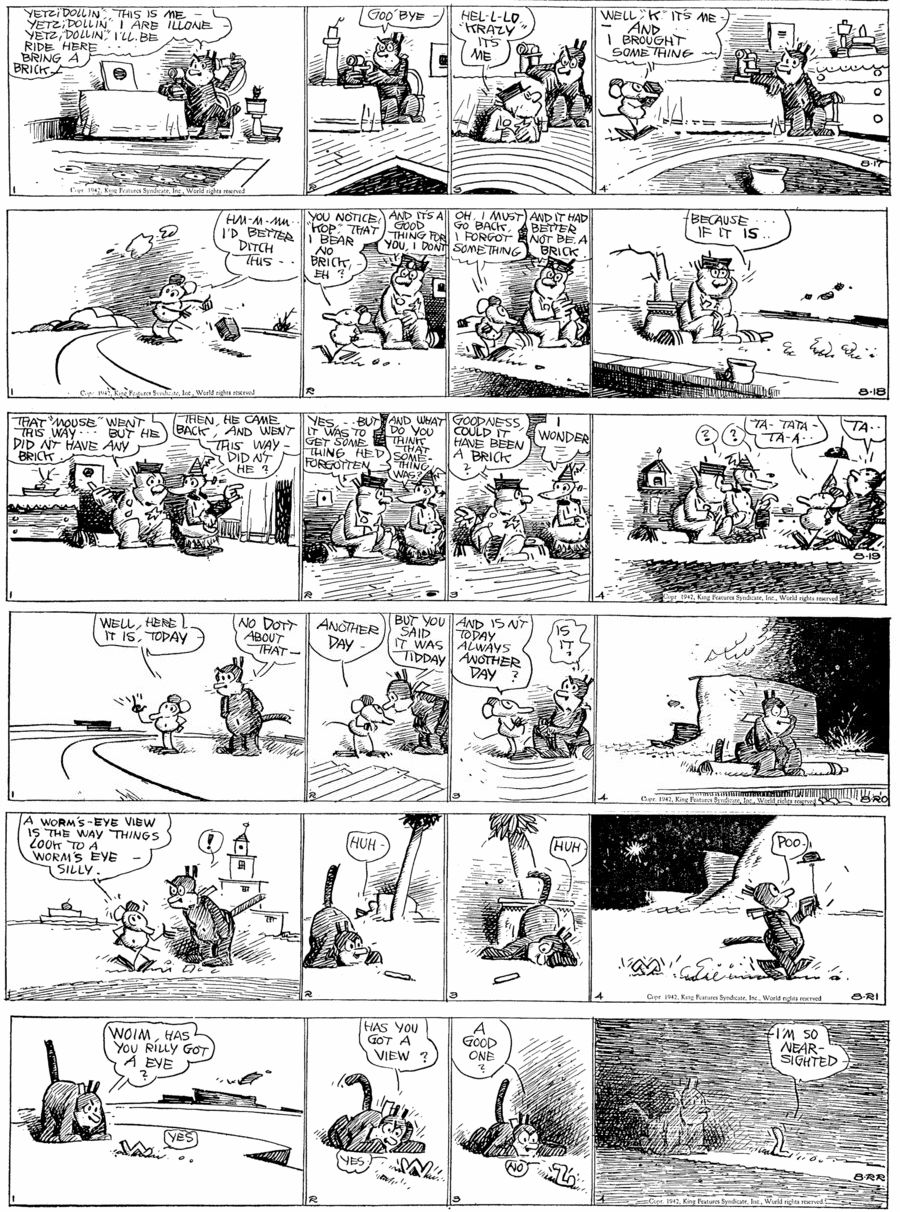 Gentle readers, here’s Krazy from 8-17 to 8-22-42. The sharp-eyed completists among you will notice that 8-20 is missing. King Features doesn’t have it, and I was unable to find it elsewhere, so if anyone can furnish the strip, you will get a free subscription to this website! (Our wonderful reader G. Heinlein has furnished the missing Krazy from 8-20-1942! Thanks, G.! You now have free access to the blog!) Herriman’s staging stands out to me in the 8-17 and 8-19 strips as the lower half (which was often cut-off when 1940s newspapers crowded 16 to 18 daily strips on a page) is adorned with rugs and dark spaces under the floor boards of theÂ  Coconino desert stage where the action takes place. I especially like the last panel of the 8-22 as Garge shows us what Krazy looks like to a near-sighted worm, the inking is a perfect representation ofÂ how a near-sighted person without glasses would see the Kat.

Â Here’s Felix from 8-6 to 8-12-1934. He is still the reluctant pet of a house-burgling crook. Otto gets into a bit of 1930s style racial caricature in the 8-10 and 8-11 strips as the crook paints Felix white and blacks his face up to foil the police. In the Sunday, Felix is still pursued by the ravenous animals on board the deserted ship. He sets a captive bird free, and the grateful avian flies out to land with a rope so that Felix can tightrope walk his way to safety.

Â Myrtle is from 5-10 to 5-16-1948 this time, complete with the 3/4 downshot Sunday page. My favorite is the bunny joke from the 5-15 strip, in which a picky rabbit wants mayonnaise on his lettuce. Dudley Fisher had a way with cute animals and birds, his gentle comedy has no counterpart in today’s nonstop snark that’s taken over just about all comedy outlets, including comic strips. 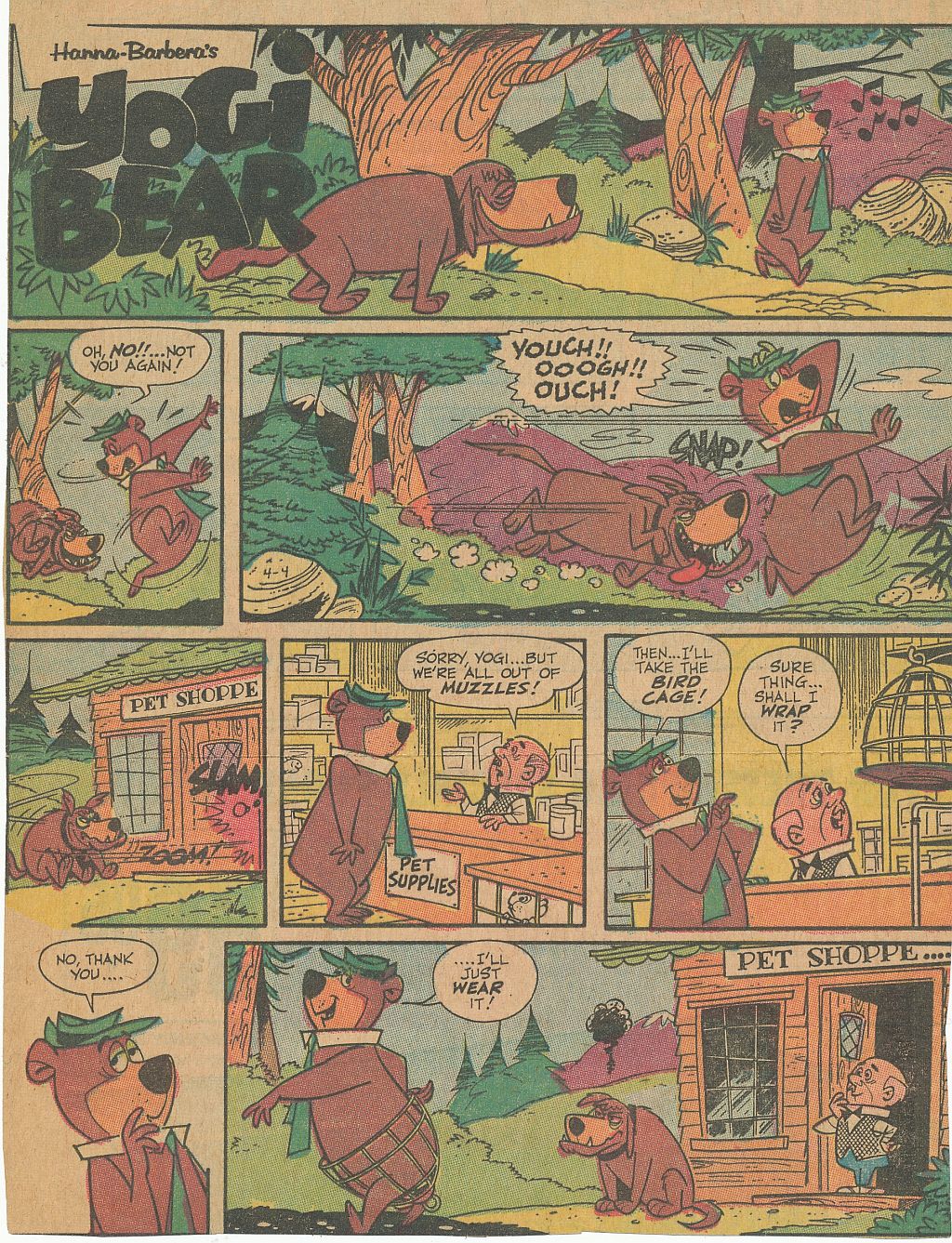 Â These Yogi Bear pages from April, 1965 appeared in the last month of Harvey Eisenberg’s short life, he died four days before the 4-25 strip reproduced below. The 4-4 and 4-11 pages feature “Mugger”, a snickering pooch designed by Iwao Takamoto for the “Hey, There, It’s Yogi Bear!” animated feature. Harvey was just as adept at drawing Iwao’s designs as Ed Benedict’s or Dick Bickenbach’s, so he exaggerated Mugger’s teeth and streamlined his body for action in a very pleasing way. Harvey’s poses and his way of arranging figures and action on a page always remind me of the best of the Tom and Jerry cartoons. Just click to enlarge the 4-18 strip above and you’ll see a tennis gag that is carried entirely by the action poses. 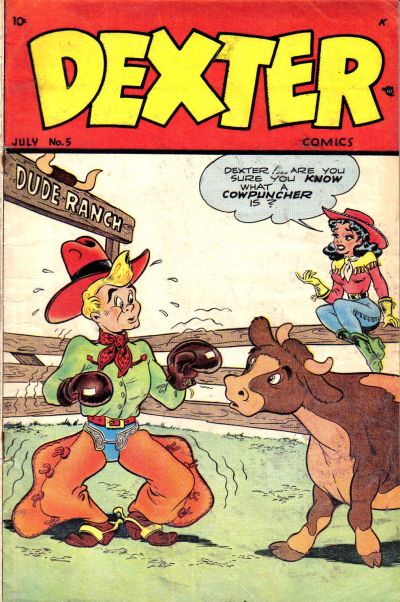 Â Here’s the cover of a “Dexter” comic book from 1947, that Harvey drew for the Dearfield comics company. Harvey was the co-owner of that company along with Joe Barbera, and they published many handsome looking comics with the characters “Red Rabbit” and “Foxy Fagan”. I had never heard of the “Dexter” series until I ran across them on the Internet. Harvey’s trying to tap the teenage comic market which was starting to catch fire post WW2. Archie comics, Mayzie comics, etc. were eating into the funny animal market, so Harvey and Joe tried to fill a niche. I don’t know how adept Harvey was at drawing teenage boys, but his girls are cute, and so is the steer. I’d like to see an issue or two of “Dexter” to see if Harvey drew the interiors. Anybody want to scan any pages for me to look at?

Â This was not the last Yogi Bear Sunday that Harvey would contribute to, as you’ll see in future posts, he worked about 9 months ahead, so his art continued through just about the rest of 1965. He died of a heart attack. My guess is that he put in so many hours at the drawing board, that he never got any exercise, and like most folks of the “greatest generation”, he probably smoked as well. He left us a grand legacy of beautiful cartoon drawings, animation layouts, comic books and comic strips. Yowp is no longer posting these Yogis on his blog, so this is the only place where you’ll see them from now on. See you soon!