Hello again, readers! I’m a lot better than I was at the last posting, fever is gone, and I’m breathing better. I can walk now, not quite as far, but I’m walking. I’m also doing some household chores like gardening and cleaning floors. Since I took all the antibiotics, I’m not quite as crabby as I was when I was “under the influence”. I’m hoping that my lung will be completely clear very soon.Â  Today’s lead strip is “Willie Woo” by the New York animator, historian and occasional columnist, Howard Beckerman. It was syndicated by NEA in 1961, this episode is from Jan. 22nd. I saved this strip from an out of town paper because I liked the style, it reminds me of Gene Deitch and Bobe Cannon. Howard Beckerman did not compose the music in this episode, but bought it from Marion Abeson. There aren’t too many comic strips that had sheet music printed into them: “Willie Woo” seems to have been an “activity” strip for children, probably had games and puzzles worked in to the strip at times. I have no idea how long NEA syndicated the strip or how successful it was. It’s one of the few strips actually drawn by an animator. Except for Floyd Gottfredson, Walt Scott, Harvey Eisenberg, Hank Ketcham, Walt Kelly, George Baker, Fred Harman, Gus ArriolaÂ andÂ Gene Hazelton, it’s hard for me to remember how many cartoonists who started out as animators migrated into the newspaper comics. There are many animators who drew comic BOOKS, and I don’t include Winsor McCay in this, because he started in newspaper comics. So with “Willie Woo”, Howard Beckerman joins a very select few who cracked a difficult market.Â Howard has his own website at www.howardbeckerman.com , but there is no information on “Willie Woo”. If any readers can add to this story, feel free to comment.

Krazy is from 12-16 to 12-21-1940. The week consists of three two-day continuities, the first has the Kat unable to say “chrysanthemum”, the second has Pupp seeing double Ignatzs after smoking a bad cigar and the third has Pupp trying to grab a fresh hot brick away from Ignatz. I wonder what kind of “tobacco” was IN the Offissa’s stogie?

Felix this time is from 2-4 to 2-10-1935. In the dailies, Felix is continually under attack from the “Bully Sailor”. It’s lucky for Felix that the sailor is so backward in his reasoning powers. In the 2-8, he mistakes an octopus tentacle for Felix’s tail, and in the 2-10, Danny dives to the rescue and ties knots in the octopus’s “feelers”. In the Sunday, Felix pulls a “Little Nemo” and winds up in “Dreamland”. The banquet Felix was going to be served winds up being consumed by the cooks after Felix vanishes from his dream, a McCay story twist if I’ve ever seen one. I love the “Fraidy Cat” and “Smarty Cat” characters in the “Felix Movies” feature at the top of the page. Otto had a real gift for designing cartoon cats. Please remember to click on the thumbnails to see the strips at readable size. 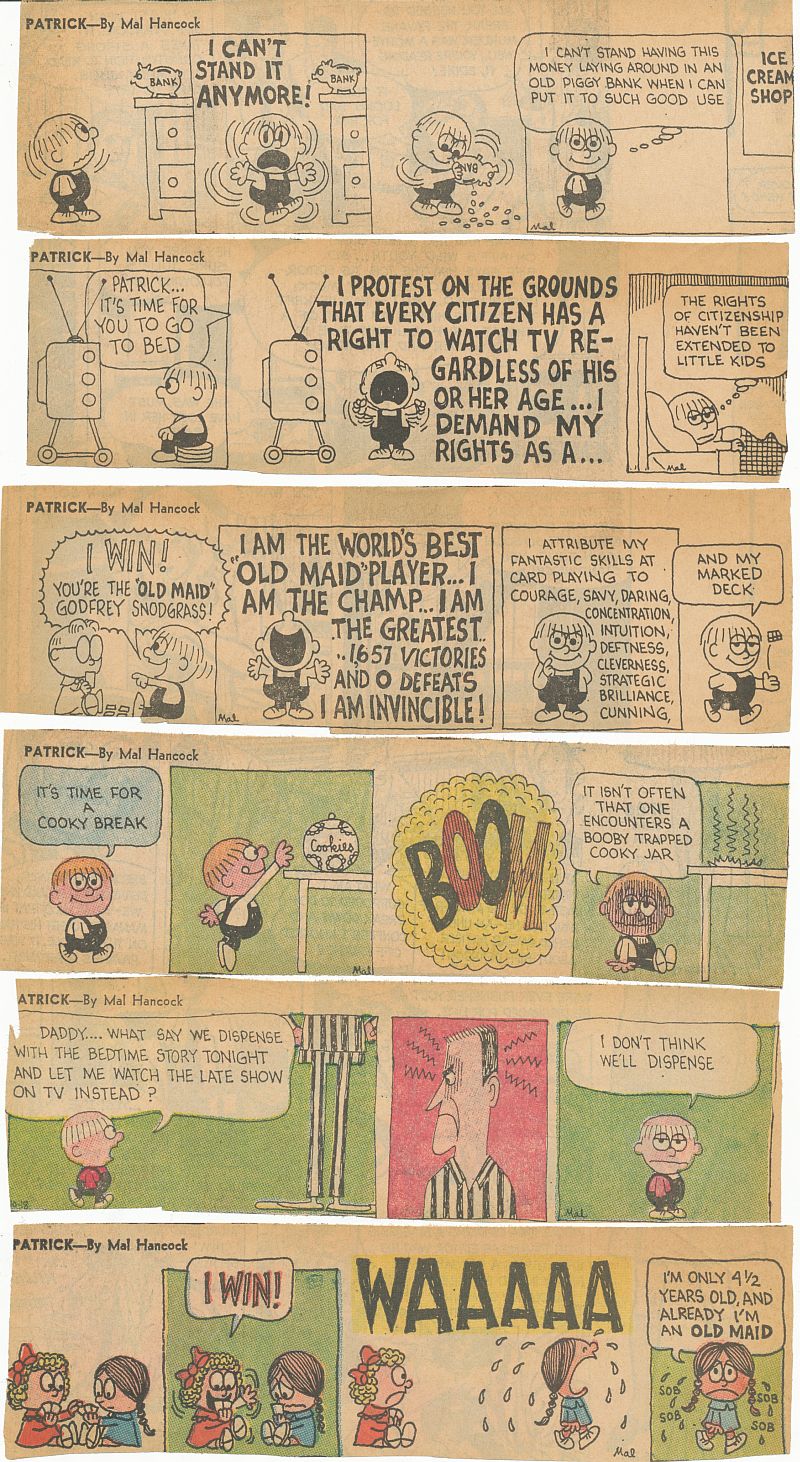 Patrick is from 10-12 to about 10-19-1966 this time. Patrick’s Dad appears in the 10-18, still mad at his son, over TV shows. Patrick’s “right” to watch TV is debated in the 10-13, with the kid finding out he has no rights. You will note thatÂ the first three strips in the Patrick section of the post are in black and white. This was the result of a press room strike at the St. Louis Post-Dispatch, resulting in a totally black and white newspaper for at least a week. I don’t recall if it affected the Sunday edition, but the daily lost it’s “unique” color comics for awhile. Does anybody reading this blog know of any other daily newspapers that ran their weekday comics in color? They look pretty if they are scanned from original clippings, but the color tends to mess up the microfilm. See you next time, I hope it won’t be too long.

Sorry for the long absence from the old blog. I caught pneumonia in San Clemente, perhaps from a bad vegi-burger. After I ate it, my stomach was very upset and a day or so later I started feeling sick, really violent chills just from air conditioning. I thought I had stomach flu, but all that really developed was a cough, and a fever that jumped from 99 to 103 degrees back and forth. I also have great shortness of breath, I can hardly walk two blocks without breathing really hard. I miss my two mile walks very much. I am now on antibiotics, which has tamed the fever, but my lungs are pretty full. The worst is when I get into a coughing jag, is I start choking because I can’t get a breath! It can be pretty scary! So please, all my readers, don’t eat any bad vegi-burgers!

Â Â Â Â  Have you visited my friend Pat Ventura’s new blog? It’s at www.patcartoons.blogspot.com. Kind of an odd address, no “@” sign! You will see many of Pat’s drawings of characters we worked on for the “What A Cartoon!” series of shorts produced by Fred Seibert at the old Hanna-Barbera studio. We, meaning myself, Julian Chaney, Robert Ramirez and many more, really loved making layouts for Pat’s cartoons. Sledgehammer O’Possum, Yucky Duck, his version of George and Junior, what happy memories! I remember I was continually ill from the air-conditioning system in the old plant. My supervisor, Larry Huber, was not happy that I made so many layouts for some of the scenes. I just couldn’t help it, Pat’s designs were so much fun to draw that I wanted to animate ’em! What matters now is, we had fun making them, a few people enjoyed watching them. Now we’re all unemployed and broke. Sometimes you pay for your fun in this business, big studios don’t like independent thinkers. Pat Ventura really thinks for himself, he’s been dreaming up cartoon stories with his own characters since he was a little kid. Go over to his site and maybe drop a comment, he’d love to hear from you.

I’m not too energetic this time, so I will just post my usual strips without much comment. 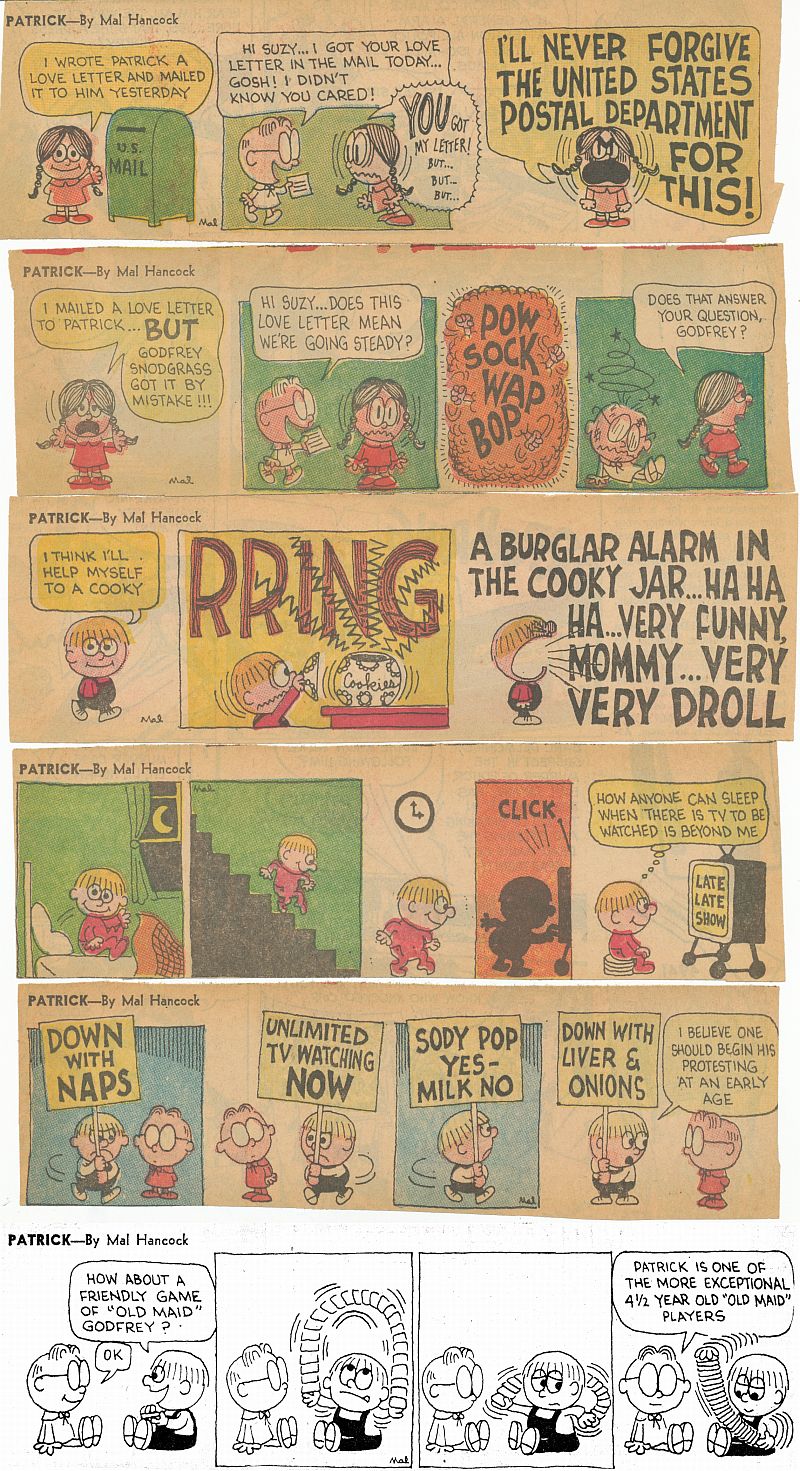 Patrick is from 10-6 to approximately 10-10-1966.Â Â  You will note that the 10-10 (?) is in black and white.Â  The St. Louis Post-Dispatch was on strike at that time, and the color engraving department was closed, so all the dailies were printed in black and white for awhile. The Post was always prone to strikes, back when workers had the backbone to demand better wages and conditions. Too weak to write more, see you again soon, I hope.