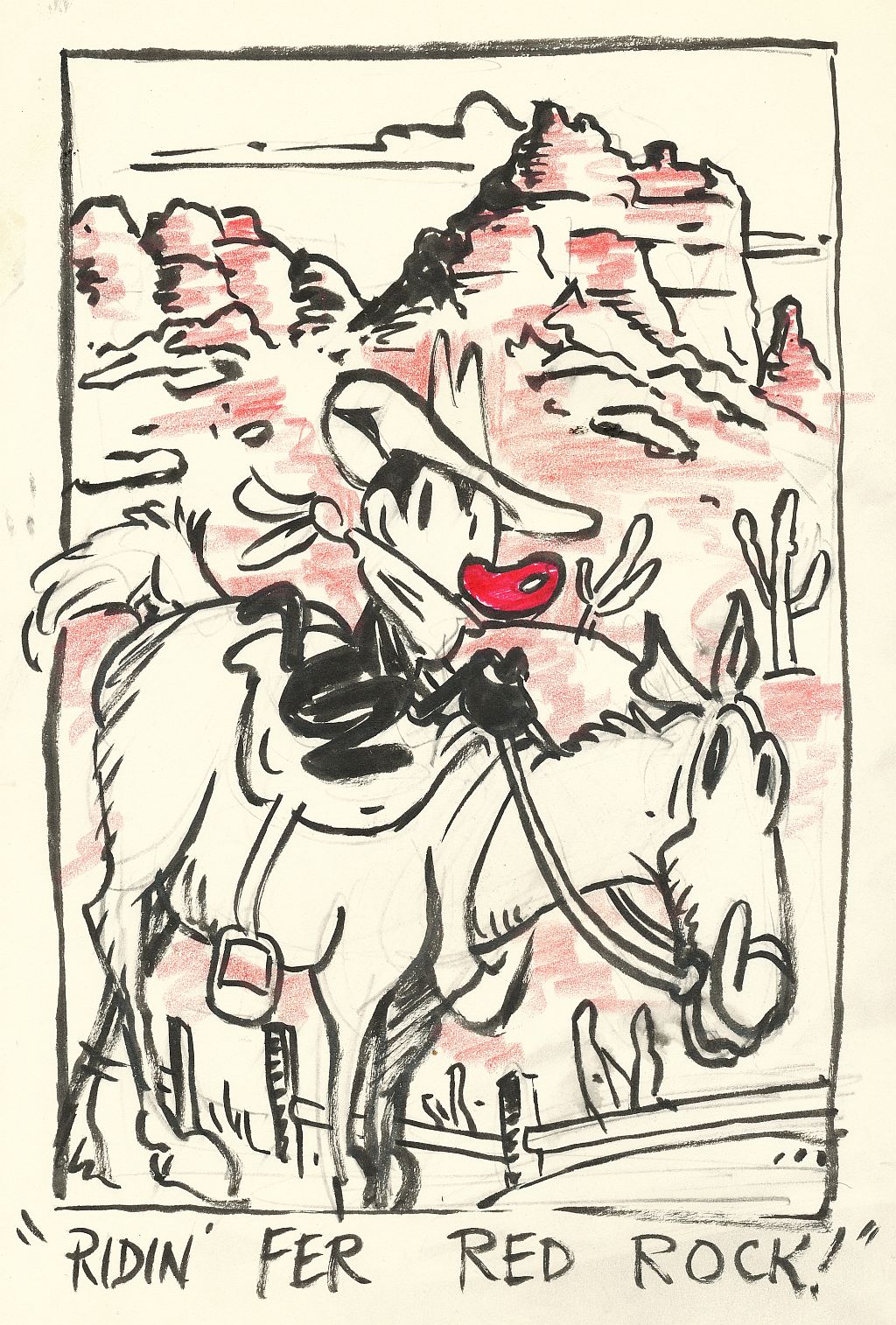 Â Folks, “Some Other Cat” has been accepted into the Sedona International Film Festival (www.sedonafilmfestival.orgÂ )! We’re screening as the accompanying short to the feature “Garibaldi’s Lovers” at the Harkins 2 Cinema on Monday, Feb. 24th at 12:10 PM and on Thursday, Feb. 27th with the same feature at 9 PM. We seem to be one of the few animated shorts at the Festival, maybe they liked the SouthWest backgrounds in the short. So head out there if you are so inclined. 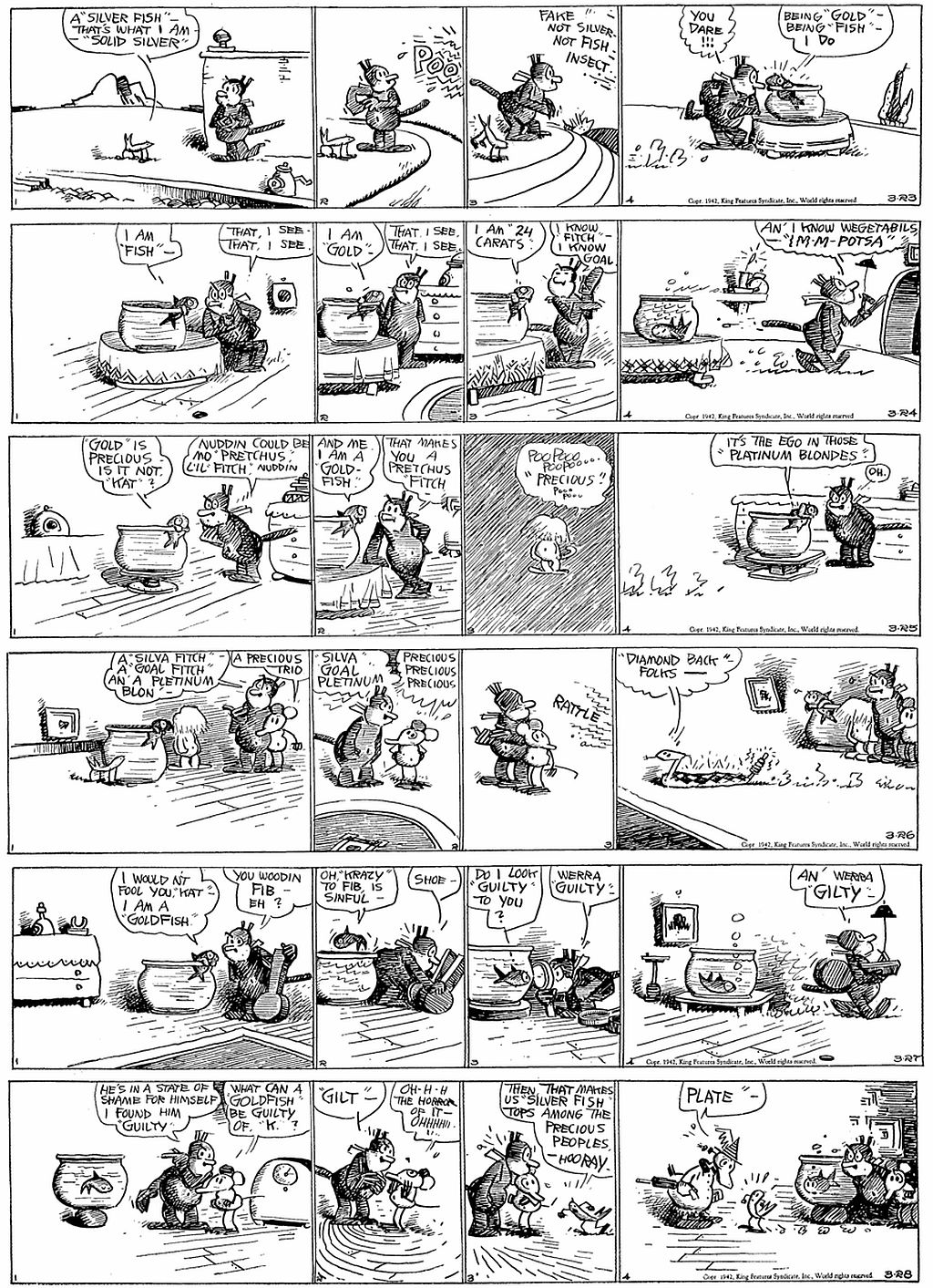 Â Felix is from 3-12 to 3-18-1934, he’s with the starving artist this week. Felix is fooled by a very realistic bulldog painting, and he restores the arms to a statue of the Venus de Milo (favorite statue of many cartoonists). In the Sunday, Felix gets blown off the planet Jupiter by the March wind and starts travelling through the galaxy.

Â Here’s the Yogi Sunday comics from March of 1964, all the work of one of my favorite cartoonists, Harvey Eisenberg! That flying squirrel in the 3-8 has been in the Yogi pages before, he’s “Harman-Ising” cute! The “Gambling Yogi” story is appealing in the 3-22, provided you’ve never lost at the gaming tables in Vegas! Seems like Mr. Ranger is mighty forgiving of Yogi as long as he’s winning! I’m keeping this post rather short and sweet this time, as we will be busy with Sedona for the next little while. See you soon! 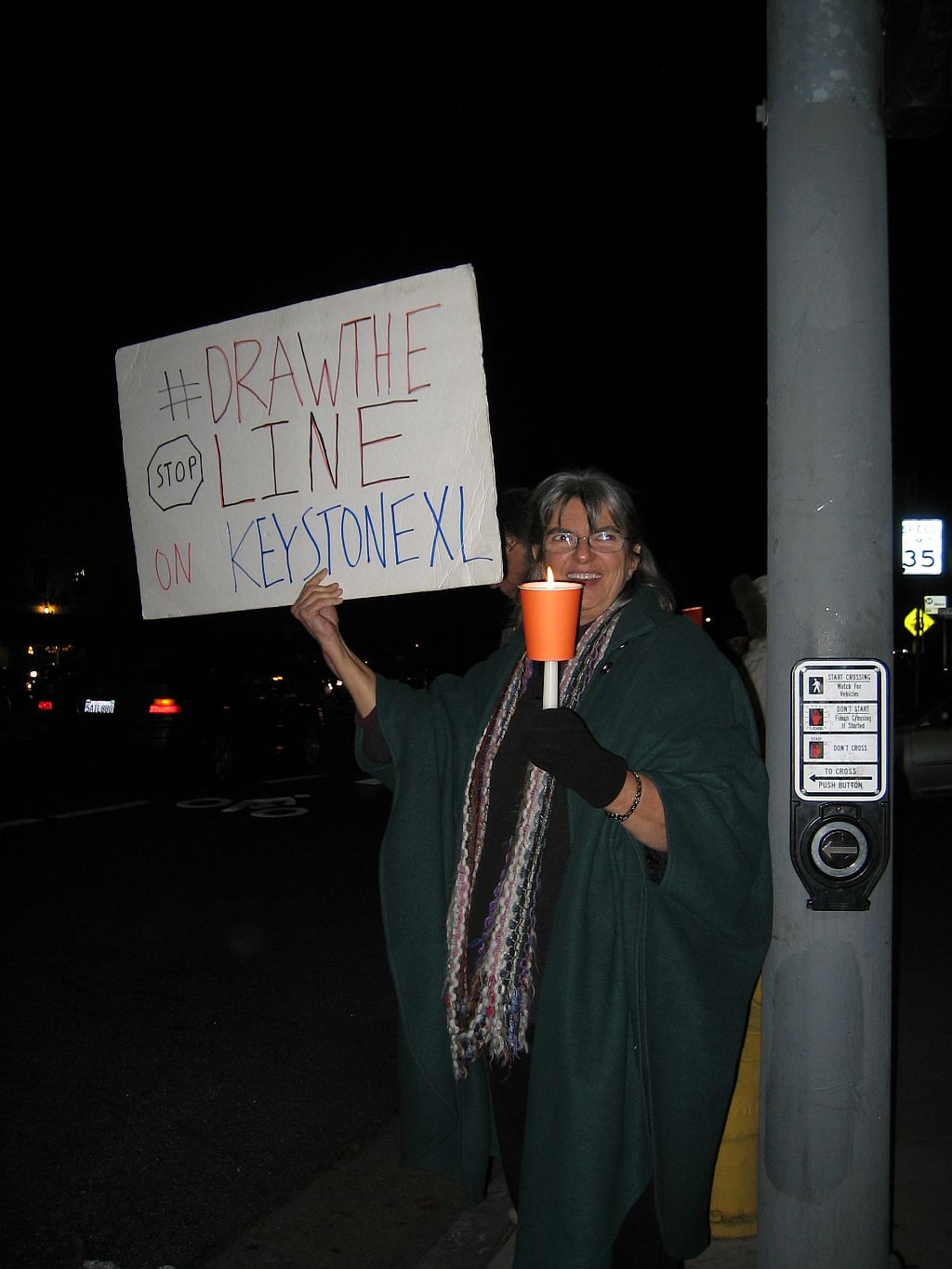 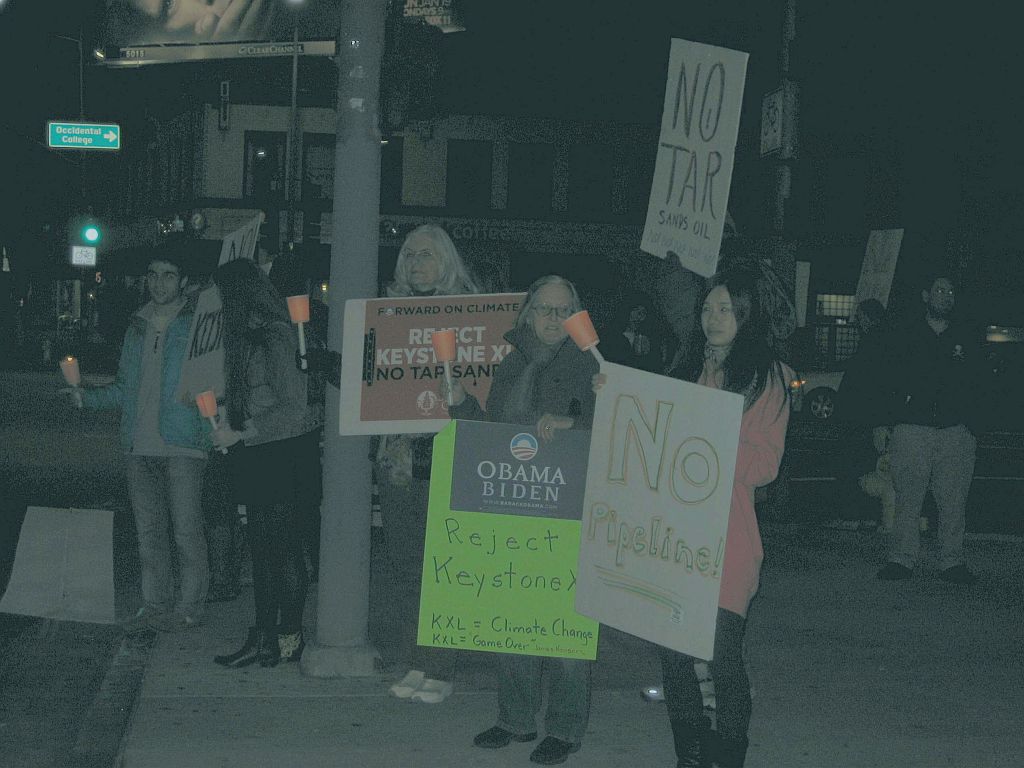 Â For the first time in Catblog’s history, this post is going to be a “political” commentary, so if you don’t like to be exposed to progressive thinking, just skip to the comics.

I participated in a demonstration last Thursday night to raise awareness of the impending construction of the Keystone XL pipeline. This pipeline is being financed by a coalition including many Chinese oil companies and the billionaire brothers, Charles and David Koch, to extract the world’s dirtiest crude: tar sands oil, in Alberta Canada and transport the oil in a pipeline built across the United States all the way to Corpus Christi Texas! Once there, the oil will be refined in a heavy-duty plant owned by the Koch Brothers and exported to China and other consumer countries around the world. The Koch’s refinery is uniquely positioned to reap the benefits from Keystone XL, since theirÂ Corpus ChristiÂ outfit is one of the few that can refine such heavy tar sands crude. We are being told that the tar sands oil will make the U.S. less dependent on imported oil, but the U.S. will get almost no benefit from this pipline, as the oil is not really being refined for domestic use, but for export. If approved, the Kochs, Canada and the Chinese Oil companies will be swimming in profits from this dangerous project.

How will this new fossil fuel development affect the World’s climate? Scientists have stated that if this pipeline is built and the tar sands oil is extracted on the scale envisioned, it’s “game over” for the climate, and probably for human life on Earth. With this much at stake, it’s saddening that our Clear Channel dominated media would rather feature stories about Miley Cirus and Kim Kardashian than the Keystone pipeline!Â During ourÂ demonstrationÂ against the pipeline,Â a gentleman told me that he thought that President Obama will eventually approve the pipeline due to the irresistible financial pressure of the oil interests. A lady informed me that the pipeline has already completed construction through Texas and Oklahoma, and is just waiting for the GovernmentÂ green lightÂ to connect to Alberta. I can’t find any confirmation of this rumor on the Internet, so if it’s true, that certainly demonstrates the Oil Industry’s arrogant certainty that Keystone XL will be approved! So it’s time to put aside your iPads readers, and take to the streets!

I went to nearby Eagle Rock on the corner of Eagle Rock and Colorado Blvds.Â on February 6th and met a lot of good people including many ladies from nearby Occidental college. It’s nice to see young people aware of an issue bigger than a cel phone screen! I grabbed a candle and a picket sign and waved and yelled “Stop Keystone” at the traffic passing by. Some motorists made obscene gestures, but many honked their horns in sympathy against Keystone, especially the bus drivers and riders. Several buses stopped in front of us and everyone on board was all smiles; of course most city buses here are powered by Natural Gas, which has it’s own issues, namely fracking, but is cleaner than tar sands oil.Â The Keystone pipeline would be prone to leaks due to the toxic corrosive nature of tar sands oil, threatening ground water tables and slashing through sensitive wildlife habitat.

Ninety minutes of sign wiggling won’t be enough to stop the pipeline or the Kochs, but it’s a start! This Thursday, 2-13-2014, President Obama will be meeting with Governor Brown and the Mayor at the Los Angeles City Hall at 200 N. Spring St., L.A. 90012, to discuss Climate and energy issues. There will be a demonstration there organized by Credo, NRDC, The Sierra Club and more to keep awareness of the poisonous Keystone pipeline before the President and State Officials. If you can put down your iPads for a morning and be at the L.A. City Hall at 11 AM, you may help toÂ extend the life of the Planet so that you may eventually return to your iPads and safely read comics! Be there and Help Yourselves! Look for Keystone XL demonstrations near to where you live, and if you can’t find one, ORGANIZE one! End of lecture for this post. 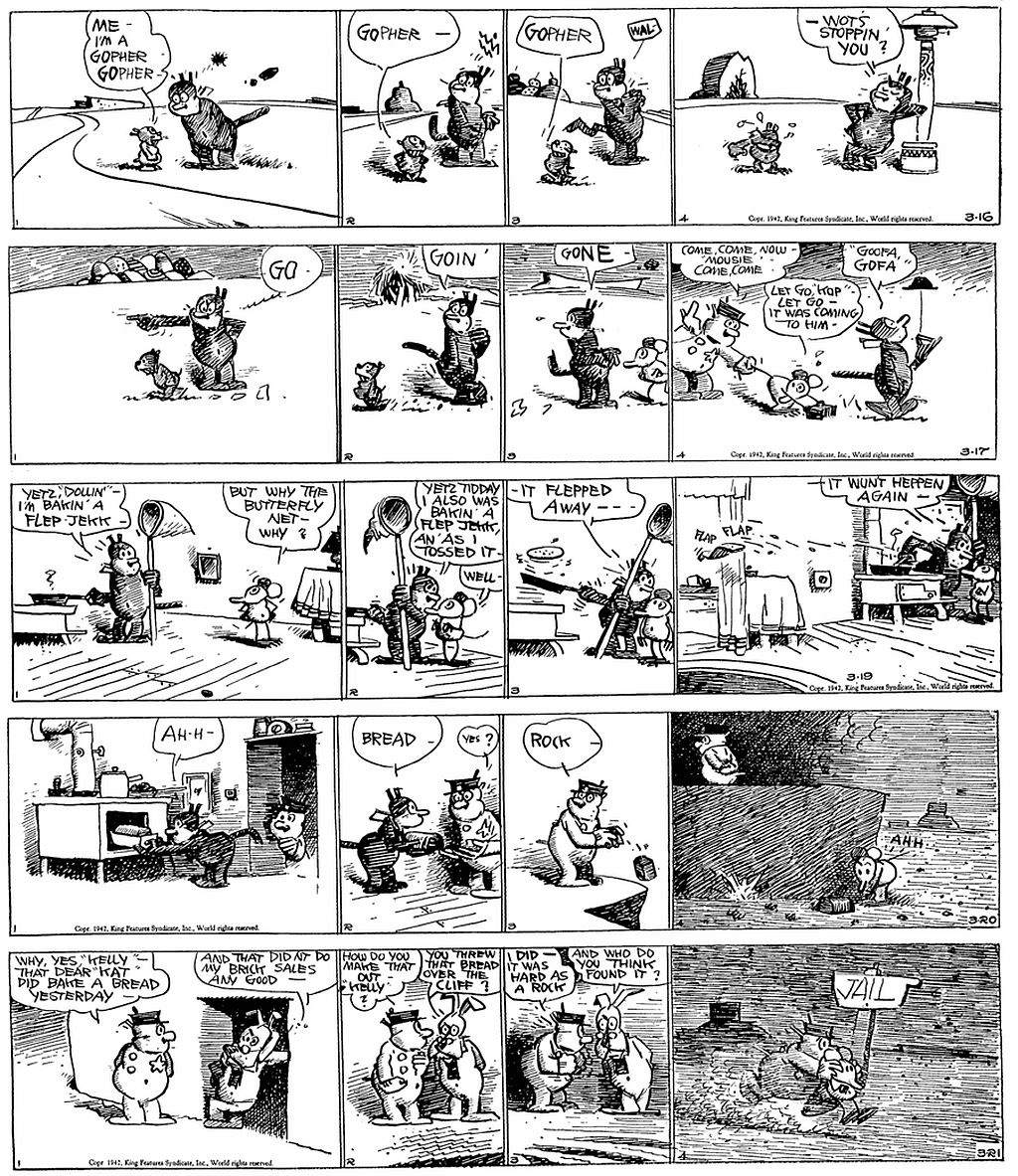 Â Here’s Krazy, from 3-16 to 3-21-1942, 3-18 is missing, anyone have it? It features a Gopher character in the first two, then features Krazy as a baker of flying flapjacks and brick-hard loaves of bread in the 3-19 to 3-21 episodes. I love the masterful pen shading in the last panels of the 3-20 and 3-21 strips, giving us the feeling of the Coconino desert at dusk.

Â Felix is from 3-5 to 3-11-1934 this outing, Felix is again in trouble on account of food. He listens to the radio in the 3-5 and 3-6 strips, and consequently can’t hear the dinner bell. In the 3-8 strip, Felix gallantly sacrifices his home with the Dooits, so that he can forage for his own food and be less of a burden on the family. The 3-9 is missing, can anyone supply it? (Our friend Yowp has supplied the missing daily, we now can see Felix’s first meeting with the artist! Thanks from the Cat to the Dog!) In the 3-10, Felix picks out a starving artist to live with and feeds the artist by means of a tube of paint. The Sunday still has Felix trapped on the Moon with Jupiter Pluvius and the March Wind collaborating on Climate Change. I love the long continuities that were the norm in newspaper comics in the 1920s and 1930s.

Â Myrtle, from 12-7 to 12-13-1947, features a beautiful Sunday page, with Dudley Fisher’s unique bird’s eye view format, and some energetic dailies, with MyrtleÂ finding both braids on the left side of her head in the 11-8. Snoggons kisses Myrtle in the 11-10, causing her parents to worry about romance dawning on the little tomboy, I love Fisher’s mid-air pose of Myrtle in this one. The 12-13 has a funny concluding panel as Myrtle tells Freddie how much a lady’s hat really costs, and he beats such a hasty exit that the chair and his daughter both flip over backwards! Until next time readers, study about the Keystone pipeline, you will be quizzed!