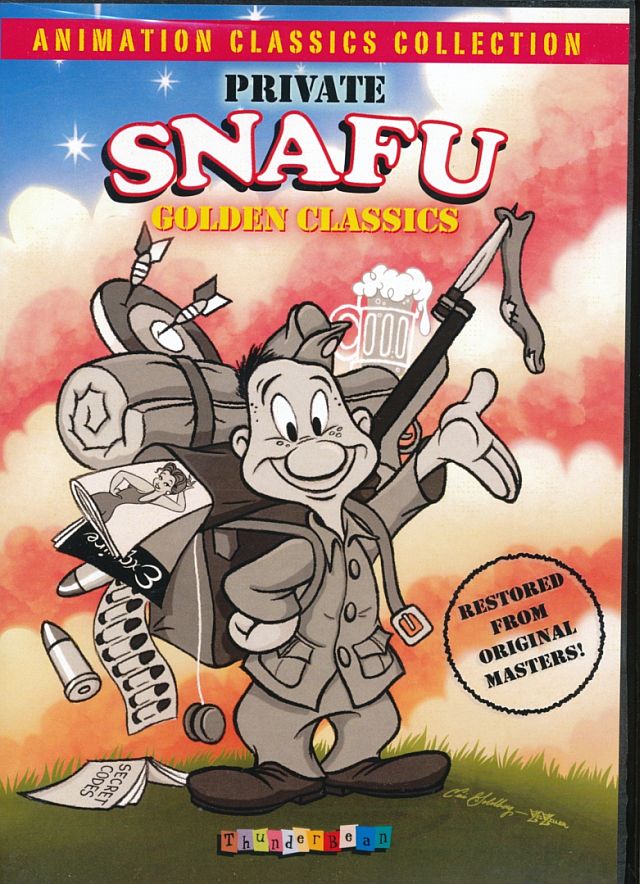 Erin Go Braugh! It’s a little early for St. Patrick’s day, but I’m Dublin’ Oop this week anyway, you’ll see what I mean further along. Steve Stanchfield’s magnum opus: Private Snafu: Golden Classics, is now available through Amazon.com or your favorite video retailer. I like it, but the first new animation I’ve done in quite a while is in there, so I’m prejudiced. The transfers are really first rate, almost all of them from 35mm, the few 16mm ones are almost as good as the 35mm stuff. It’s loaded with commentaries from John K., Mike Kazaleh, Eric Goldberg, Jerry Beck and Mark Mayerson! Mark rarely does commentaries, so get the disc just to hear his voice! I listened to all of them, and they seem pretty accurate for the most part, what can you say in three minutes? I can’t help wishing we could have had Bobe Cannon, Rod Scribner, Bob Clampett, Bob McKimson, Cal Dalton and Chuck Jones doing the commentaries, but they are looking on from another dimension. Eric Goldberg did the cover and supplied more than half the commentaries himself. He can spot Ken Harris’s animation almost every time, I can’t tell Ken’s stuff from Benny Washum. John K. didn’t spot Cal Dalton’s animation in “Booby Traps”, but he’s very accurate with the McKimson and Scribner scenes. Even the rarest “A Few Quick Facts” cartoons made it on to the disc. Steve struggled with the 35mm master materials in the National Archives for years to get the copies on this disc. He spent many hours and a lot of his own money to clean these up. The Snafus never looked better, so support the effort, buy two or three and store them away to give as gifts. Maybe donate one to your local library! Auction off your old “The Complete Private Snafu” VHS tapes on Ebay! (Just joshin’.)

Two weeks worth of your comic favorites are my New Year’s gift to you, readers. Here is Felix from 3-23 to 4-5-36. Felix brings home the diamond to Danny Dooit’s family, and the only thanks he gets are Father worrying about his income tax, the tough neighborhood dog wanting his “cut” and the snooty new English butler griping over Felix’s appetite. In the Sundays, Felix comes back to 1936 from the 6th century, and gets locked out of the Professor’s house again in the 4-5 episode.

Krazy is from 9-9 to 9-21-1940 this time. Herriman breaks the fourth wall a few times, in the 9-13, Krazy thanks Garge for the extra ink to disguise his black brick against a black sky. In the 9-14, Ignatz hides behind a fake background on a roller shade. In the 9-18, the Jail is just a set, and in the 9-19, Mrs. Kwakk-Wakk is confused about what is a set and what is real. The mysteries of Coconino continue next time.

The Patrick strips are from 6-13 to 6-24-1966, approximately. Not all the strips have the dates on them, but they are pretty close. Elsa is living her movie star fantasies, which makes Patrick so sick that he can’t slug her. Mal uses a very old joke in the 6-18 (?), “..with some it’s next to impossible.” Patrick lives very much in his own world, insulated by his selfishness, and Elsa, Suzy and Godfrey are each deluded in their own way, but usually serve as pawns for Patrick. Happy New Year, y’all. I’ll try to post more often in 2011, but that’s not a resolution! Remember to click on the thumbnails to enlarge the strips. Thanks for reading. 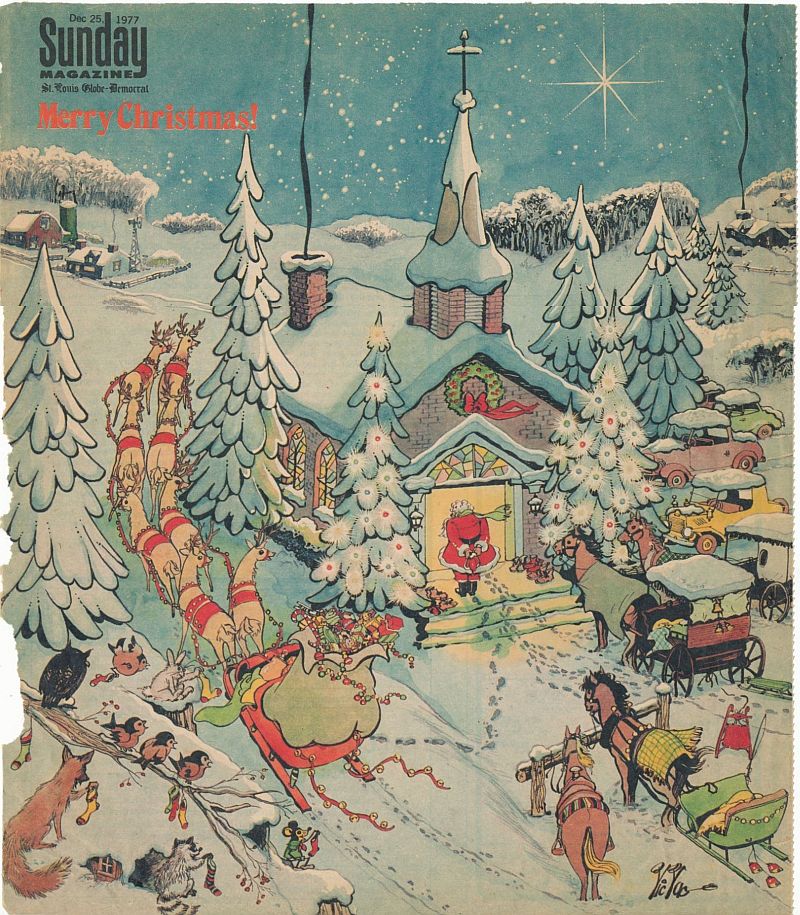 Dear Readers, Merry Christmas, Happy Chanukah and all the other Variant Celebrations! Vic Vac of the old St. Louis Globe-Democrat, did Christmas, Halloween and July 4th special covers for the Sunday Magazine through the 1930s to the 1980s. He was a staff cartoonist who liked to use aerial perspective in his work, as in the Halloween cover I uploaded a couple of posts ago. This one is from 12-25-1977, and shows Santa taking a break from driving the reindeer to worship at a little mid-western church. Maybe he’s listening to my Mother singing “Oh, Holy Night”. I like the little touches Vic Vac throws in, like the fox, raccoon, mouse and birds with their Christmas stockings, the old horses and sleighs, the barn and farmhouse in the distance, down to the boots and overshoes laid out by the church door. These drawings were never syndicated outside of St. Louis, and they really remind me of a hometown Christmas. 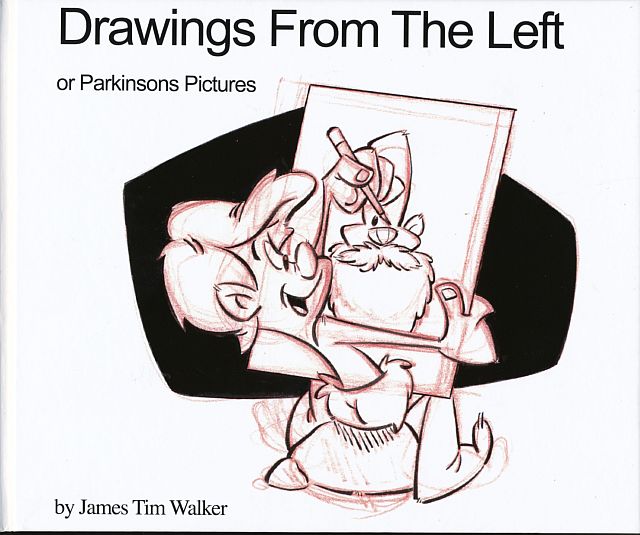 Here’s the front cover of a brand new book by my pal, Tim Walker. Tim has done animation, assistant animation, storyboard and sheet timing for cartoon studios from 1969 to the present, we met at Chouinard Art Institute in 1968. There are few people I know who love cartooning like Tim. It was a real shock for him, when in 2007 his right arm grew very weak, and what he thought was Carpal Tunnel was diagnosed as Lateral Parkinson’s Disease. Tim was very worried, because he had always been right-handed. How would he draw and write now? 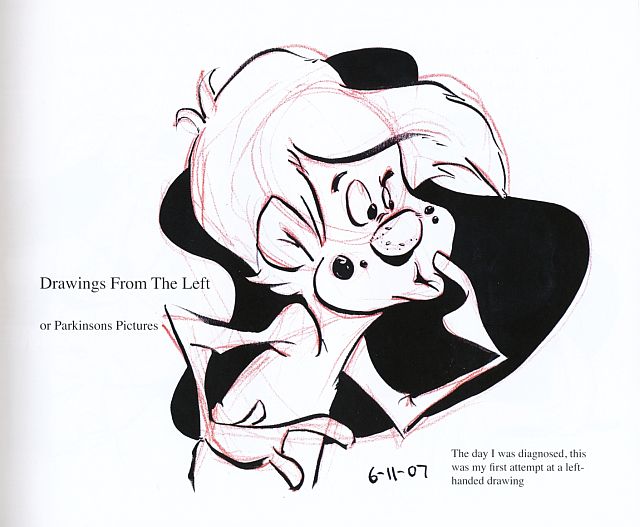 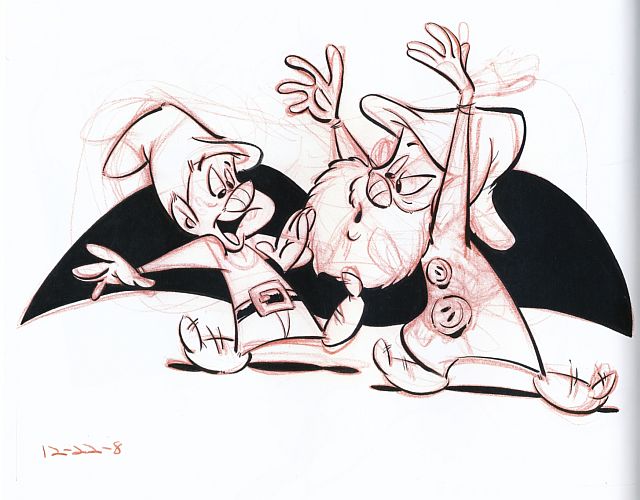 On June 11th, 2007, Tim took up his pencil and brush pen in his LEFT hand for the first time and drew the character above, his first drawing with his left hand. He kept working that hand, and soon began to fill sketchbooks with his appealing characters, gnomes, bearded dwarfs, batmen and batkids, cavegirls and caveboys and naked ladies. I like the shaded line he gets with the brush pen and the way he spots black shapes behind his figures helps to tie them together. The caveboy on the front cover is drawing a caricature of Tim with his left hand. Tim really loves to draw these characters, and almost always has a sketchbook with him. They are really fun to look at, and now he’s published this hardback book so everyone can share his story and the sketches. If you would like to order a copy, Paypal $25.00 to Tim Walker at gobofspitaa@yahoo.com . He will ship your copy to any place on earth. The binding is very nice on this book, it’s printed on beautiful paper as well.

Felix bids goodbye to Punk Chow and Fooy Tu Yu in the dailies from 3-16 to 3-21-1936 as he rides a gas balloon to the sky and boards Fooy’s airplane. Felix steals Fooy’s suitcase containing the diamond and waves goodbye to the escaping crooks. In the Sunday, 3-22, Felix is still trapped in the 6th century waiting for the scientist to bring him back to 1936 with the time-control. Bell-bottomed knights pursue him with axes and hope. Remember, just click on the thumbnails to blow them up.

Offissa Pupp becomes royalty in the Krazy strips from 9-2 to 9-7-1940. The 9-2 is a Herriman rarity, a continuity hold over from the previous week’s story. I like Ignatz’s defiant attitude toward Offissa Pupp’s royal assumptions as he finds that he is a Marquis. Does that make him a Don Marquis? 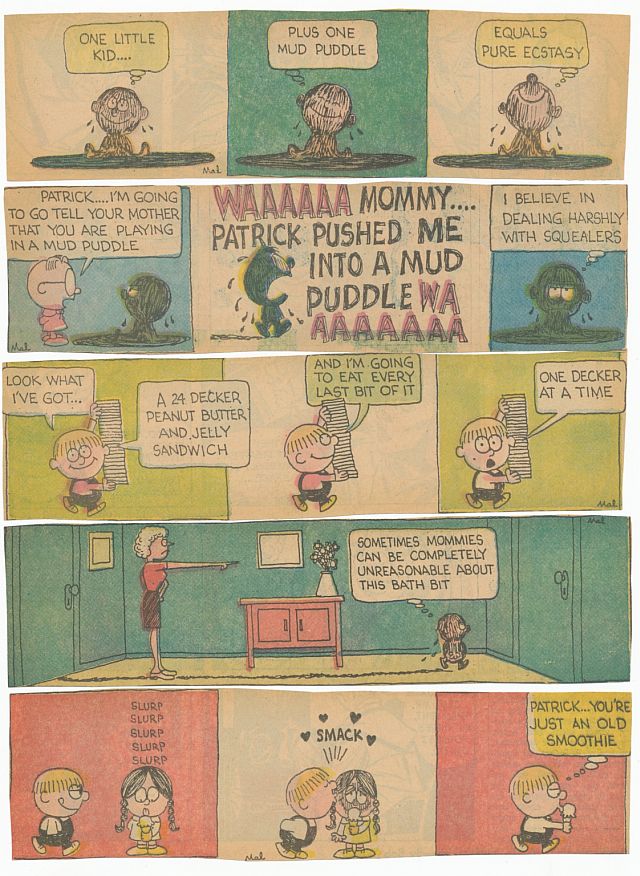 The Patrick strips this time are from 6-6, 6-7 possibly 6-8 or 6-9, 6-10 and 6-11-1966. There is at least one strip missing this week. Maybe one of my readers can supply it. Summers tended to be a little spotty with the newspaper, as Dad’s vacation time came around, the Post-Dispatch became scarce. Dad didn’t pick up a copy on his way home, he WAS home. Patrick beats Dagwood with his 24 decker peanut butter sandwich and apes Pigpen with mud puddle gags. Mommy is fully visible in the 6-10, a rare appearance.

Charlie Brubaker sent me this very early appearance of Patrick in an anthology strip called “Nibbles”, drawn by Mal Hancock, printed in an Ottawa paper.  It dates back to 4-17-1961, so Patrick has been around for quite some time for a little-known character. The link doesn’t work too well, so here’s the strip:

Thanks Charlie, for finding this!

Listen my readers and you shall hear a Christmas tale from Bret Harte, author of “The Outcasts of Poker Flat” and “The Luck of Roaring Camp”. Bret was famous for his stories about the California gold rush of 1848 and ’49, and the story I’m reading here: http://www.archive.org/details/HowSantaClausCameToSimpsonsBar/ is a good example of his short stories. It’s called “How Santa Claus Came To Simpsons Bar”, and is a tough yet sentimental tale of “The Old Man” and his sickly kid. It has a lot of Wild West action in the second half, takes about 19 minutes to tell. It is an abridgement of the original story, printed in a book called “Christmas Tales For Reading Aloud”. I’ll try to post again before New Year’s. Thanks for Listening!