It’s going to be a little short this week, dear readers. Felix is from 11/23 to 11/29/1936 and this timeÂ he is still working for Tanglefoot the detective, but is underfed. That doesn’t stop him from getting on the trail of some counterfeiters, however. In the Sunday, the art may be byÂ Jack Bogle, who drew the Felix daily strip in the late 1920s and early 1930s. It features Kitty and Bob Cat from the 11/8 strip, pursuing winter sports. 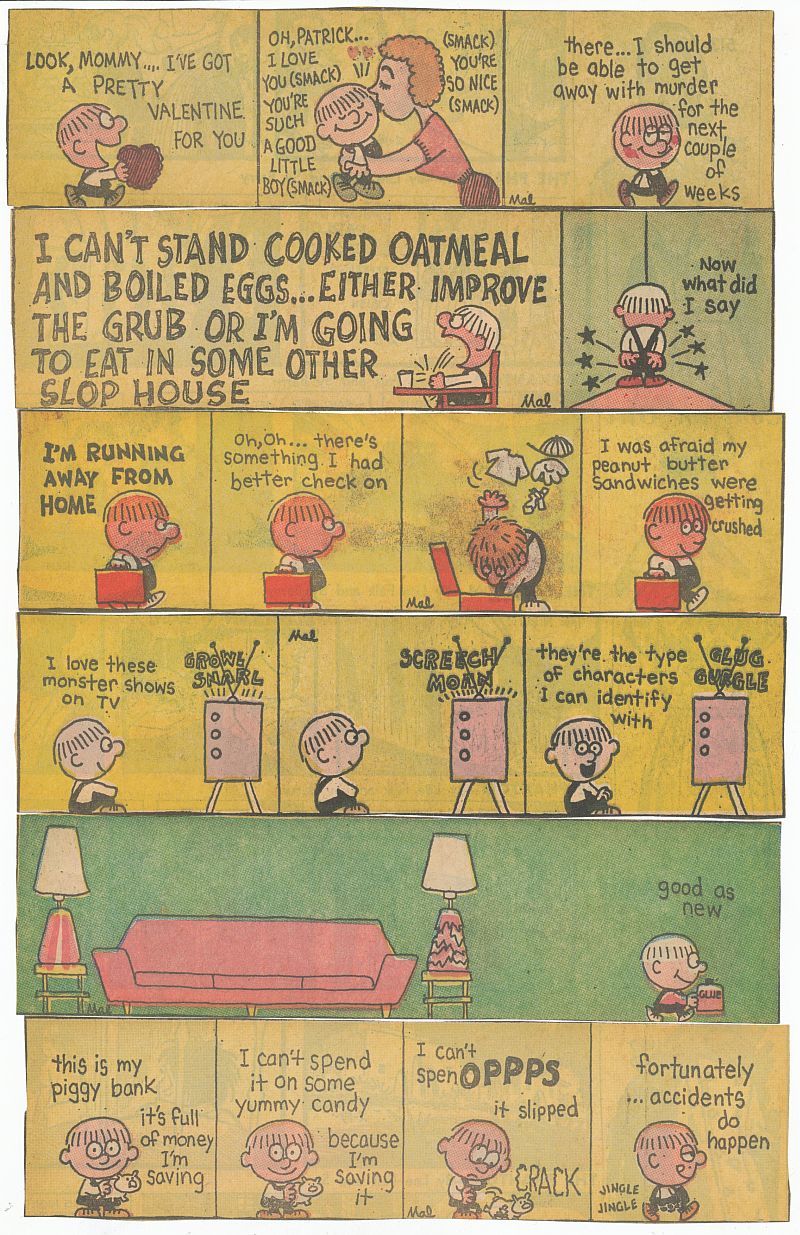 Patrick this time is from 2/14 to 2/19/1966. In the 2/14, Patrick’s mother makes a rare appearance. Mal, like Charles Schulz in the formative years of Peanuts, hadn’t yet made any hard and fast rules about full size humans in Patrick’s world, but outside of the Psychiatrist and this one appearance of Mom, they became more scarce as time went on.

Don’t forget to boycott Arco/BP. Their CEO wasn’t much help in the congressional hearings was he? BP just doesn’t know enough about oil drilling and safe deep water drilling to remain in business. If you stop buying their products, that day will come much sooner. President Obama can’t do it alone, let’s stop BP from doing this again!

Remember, if you want to donate to Greg Ford’s Fire Fund, just Paypal any amount you can afford to kausler@att.net. We have almost $300.00 collected so far, thanks to you wonderful readers. Remember, any amount, no matter how small, will help. Greg and his girlfriend Ronnie lost every possession they had in the fire, so put yourselves in their place, and help them if you can! Felix thanks you, Krazy thanks you, Patrick would probably punch you, and most of all, I thank you. Until the next time…

Charles Morgan was a news commentator on radio station KPFK here in Los Angeles, back in the 1960s and 70s.Â  He usually ended his broadcasts with “‘Persevere’, this is Charles Morgan”. I used to really enjoy his ultra-left wing views on everything, both foreign and domestic, usually a message about the working man or woman crept in to his commentaries, along with a pro-Union diatribe. I miss his tough stance, as tough as any Republican commentator today, and better educated. Anyway “Persevere” is a good motto. Please continue to “Persevere” on behalf of my friends, Greg Ford and Ronnie Scheib, whose apartment in New York City was nearly completely destroyed by fire last month. If you can give anything, no matter how small, please Paypal me at kausler@att.net, and I will forward it to Greg. Also, PLEASE continue to boycott Arco/BP here in Los Angeles and wherever you may be reading this. Think of all the Brown Pelicans, Dolphins and Sea Turtles who are dead or dying because of this heartless, greedy and reckless corporation’s wasteful drilling in the Gulf of Mexico. Think of gasoline pumped out of BP’s tanks as stained red with the blood of innocent wildlife and the future LIFEBLOOD of the region’s fishermen! This week’s Felix strips wind up the Clutching Hand mystery. (11-16 to 11-22-1936) As in the cartoon “Sure-Locked Homes”, the hand is really easily explained, see the 11-20 strip. Messmer leaves the mystery somewhat intact in the 11-21, however. In the Sunday, Felix makes another enemy, this time a musician.

In Krazy this time (5-6 to 5-11-1940), the Coconinians continue to try to impress Mimi the Poodle with their top hats and canes, until she falls for “Antoine” in the 5-11 strip with his “Apache” hat. The little peddler in the last panel is reminiscent of city street hawkers of the early twentieth century, walking around selling used clothing and crying “I Cash Clothes!” They were the mobile Goodwill stores of their day, along with the “Junkman”, who paid a small sum for household refuse, such as old egg beaters. What service! Somebody came to your house, paid you for your recyclable goods and then resold them later. Now, most of us get little or nothing for our “junk”, let’s hope we are at least saving the planet! 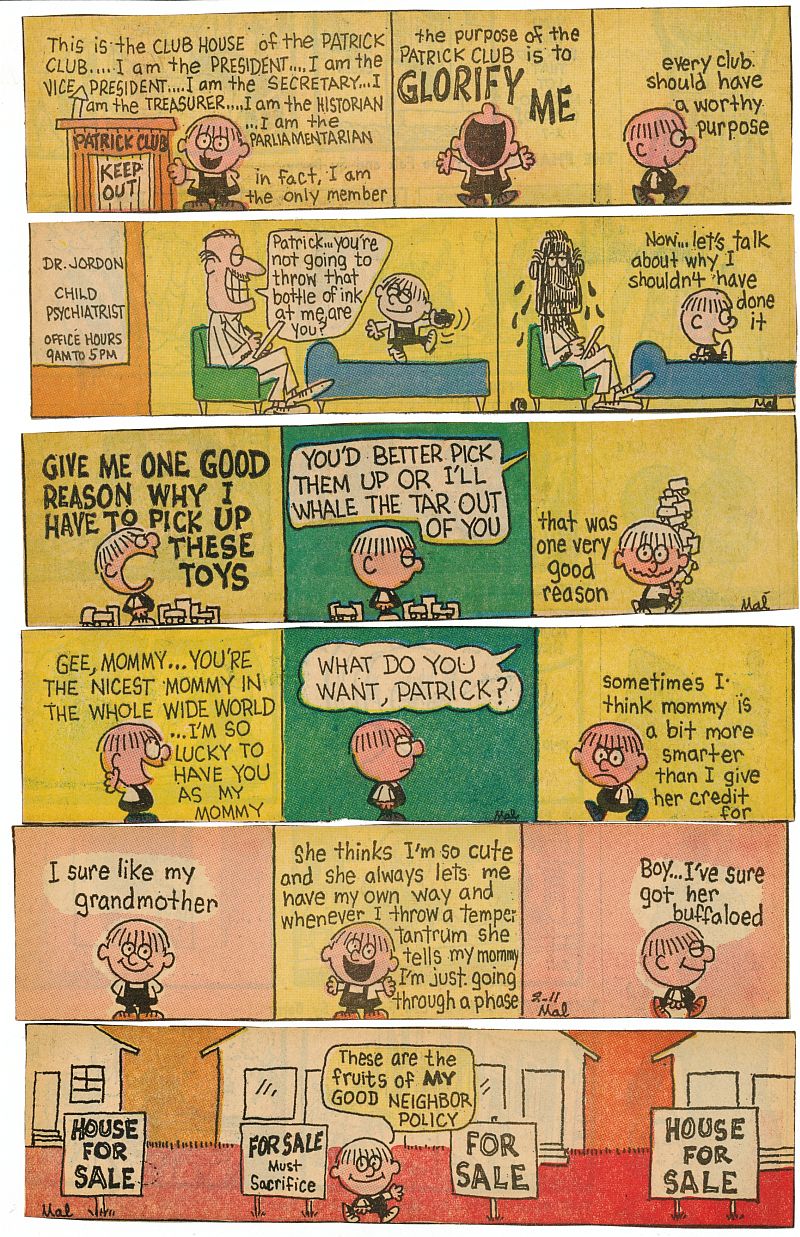 Patrick is the full week’s worth of strips this time (2-7 to 2-12-1966). Charles Brubaker commented last time that the Psychiatrist is the only adult actually shown in the strip so far, and I think he is right. The Shrink does an encore in the 2-8. I like the results of Patrick’s “Good Neighbor Policy” in the 2-12.

Thank You for Your Empathy!

Gosh, thanks, readers, six of you especially, forÂ helping my friend Greg Ford and his continuing problems with the horrible fire that burned out his and Ronnie Scheib’s apartment in New York. They say that the computer, with it’s instant communication, email, Facebook, Twitter, etc., social networking sites in general, has a tendency to mute the sense of empathy with our fellow human beings. At least here, my readers have proven that even though you read and interact with computers, you have not lost empathy or compassion for folks in need, like Greg and Ronnie. You may continue to donate, as this problem will be ongoing for quite some time. My paypal address is kausler@att.net, and you may contact Greg directly at: Greg Ford, 115 West 30th St., Suite 1204, New York, N.Y. 10001. Thanks again, everyone.

Felix this week (11-9 to 11-15-1936) has the little round cat trying to find out what makes the disembodied “Clutching Hand” move about the old house. In the 11-14, Tanglefoot the detective and all the cops leave Felix to face the Hand alone! In the Sunday, we get a beautiful Messmer chicken joke, Felix picks up another enemy, trying to secure the chicken coop for the winter.

Krazy, from 4-29 to 5-4-1940, takes up the ongoing saga of Mimi the French Poodle’s impact on Coconino. This week, everybody wants to wear a top hat and a cane to impress Mimi, even Krazy. When Krazy gets involved from 5-2 on, Offissa Pupp won’t interfere with his romantic designs on Mimi. Ignatz just won’t take Krazy seriously, jamming his top hat down over his head in the 5-4. 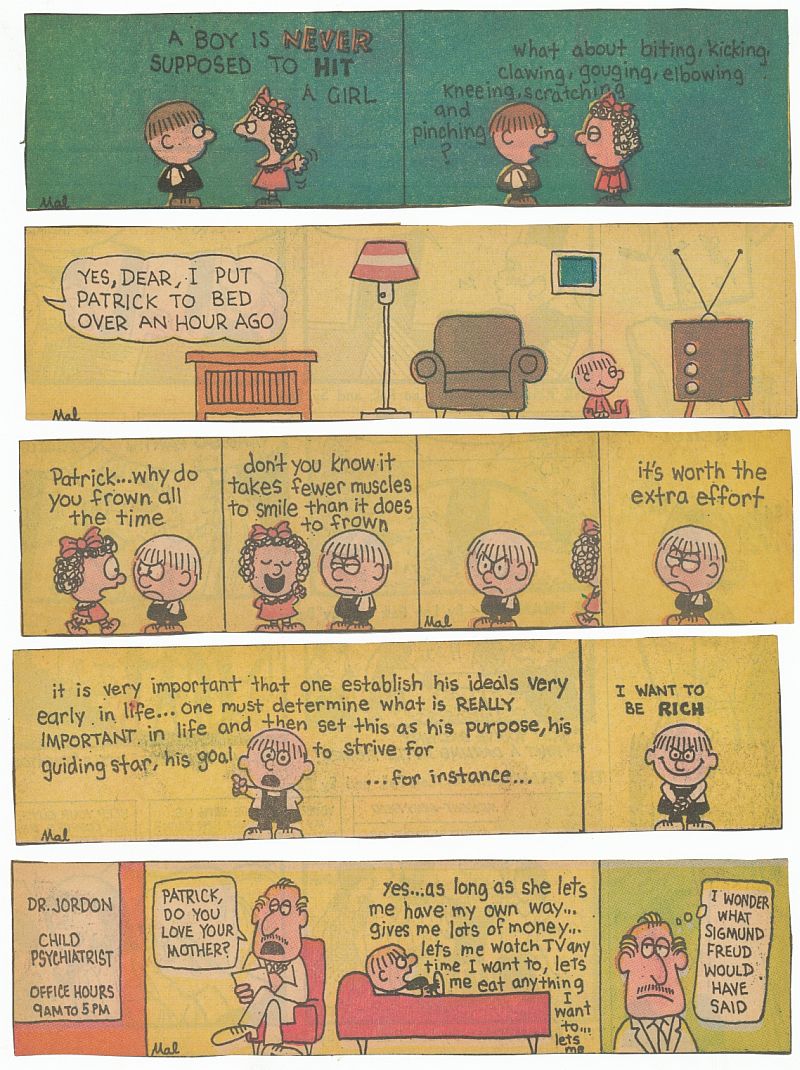 In Patrick, from 1/31 to 2/4/1966, Patrick seems to be pre-figuring Donald Trump, seldom smiling, taking pleasure from greed. I like the psychiatrist’s couch and Patrick’s extremely conditional love for his Mother, expressedÂ in the 2/4.

In keeping with the oral tradition I’ve started, here is another humorous short story from Dorothy Parker, “Mrs. Hofstadter on Josephine Street”, featuring a manservant named “Horace”. This story flirts with Black stereotypes, 1934 style, but Horace is a fascinating character, entirely revealed by his own continuous monologues about himself. This story was a lot of fun to read, especially the brief scenes between the Colonel and Horace. The New Yorker originally published it, on August 4, 1934. It runs about 17 minutes, so load up and enjoy, I’m using Archive.org now, and there are no annoying ads like over on ZShare. Go here: http://www.archive.org/details/Mrs.HofstadterOnJosephineStreet2

Remember to boycott BP oil, Arco here in the Southland, as they continue to kill the Gulf and fiddle clumsily with their various containment gadgets while the fishermen burn. Let me know what you think,Â my empathetic readers!