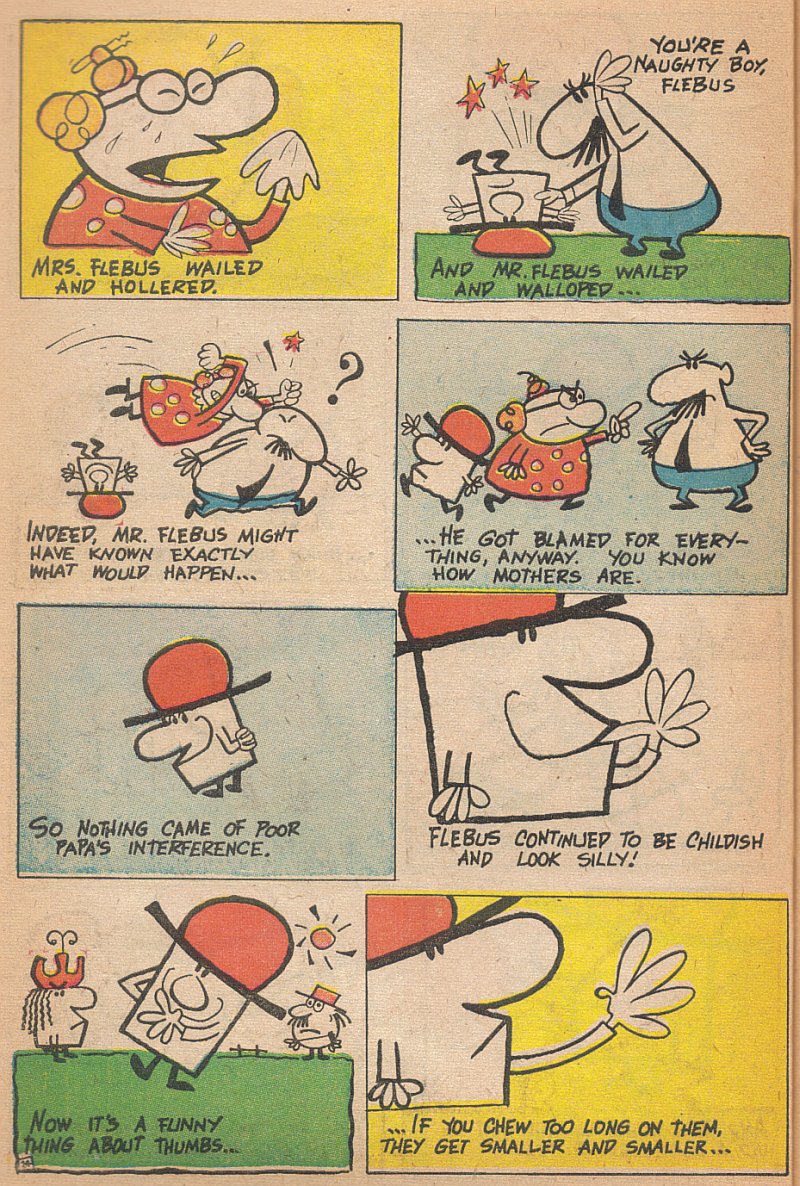 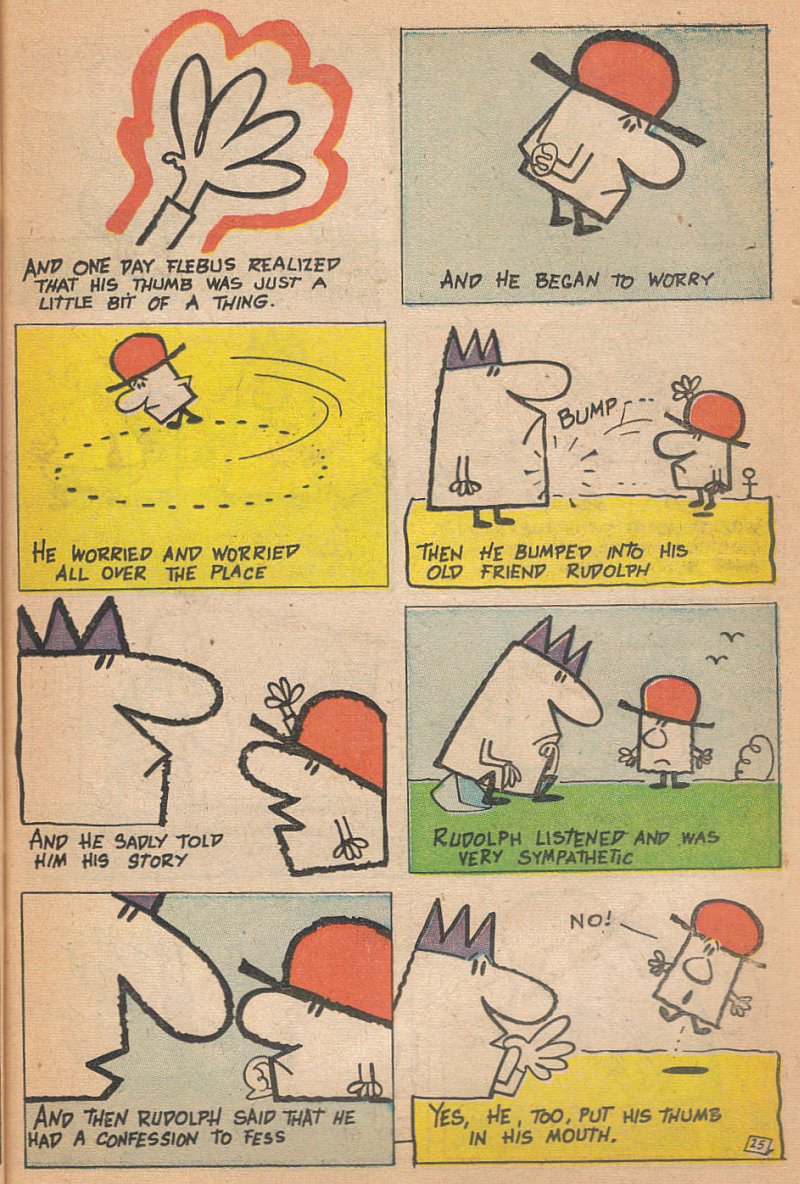 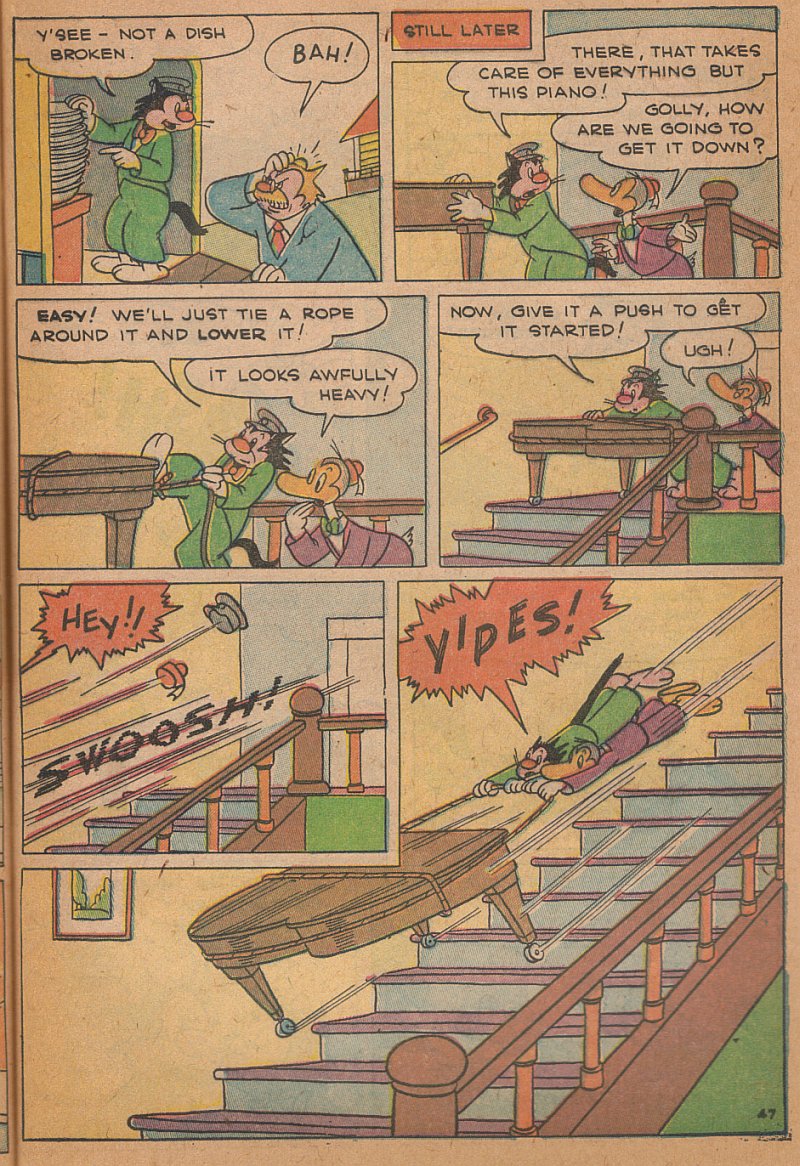 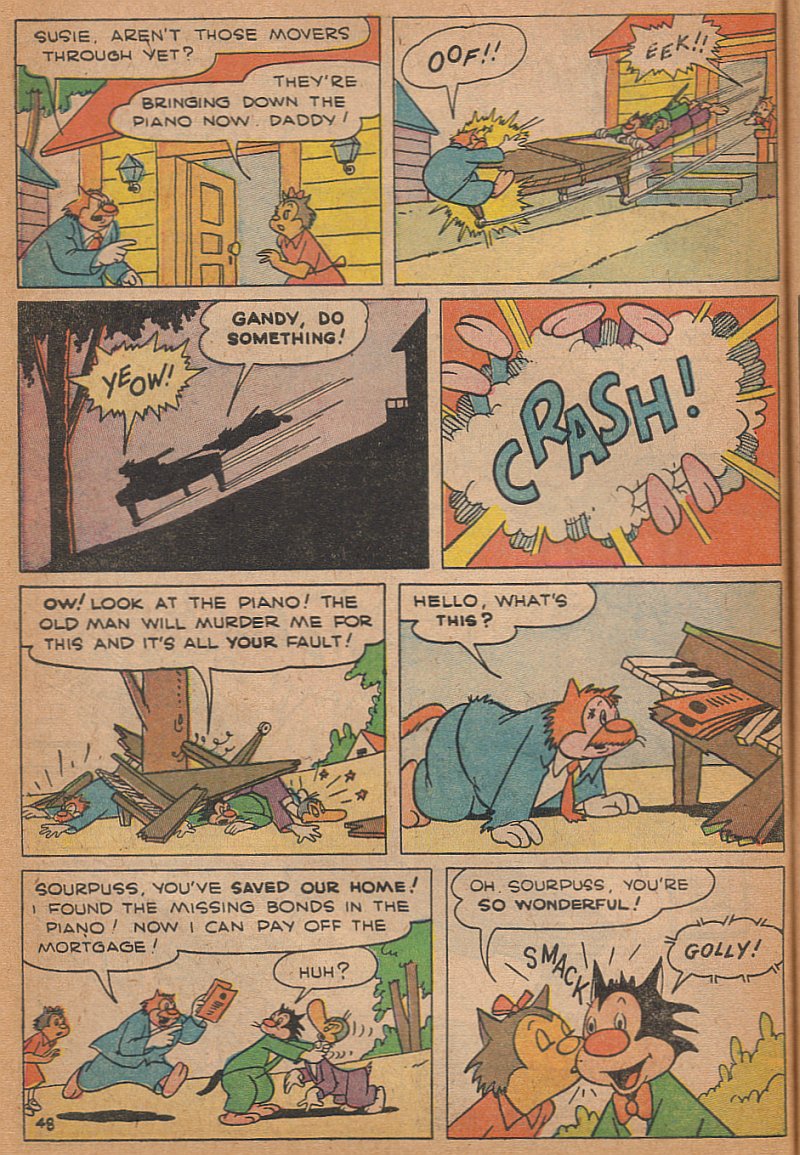 Hi Ya Pals, Happy Tanks’Givin’. I couldn’t resist reprinting this TV ad from the old St. Louis Post-Dispatch from 1956, promoting “The Cisco Kid”. I especially loved the beginning of each episode: “Here’s Adventure! Here’s Romance! Here’s That Robin Hood of the Old West, The Cisco Kid!” Of course Pancho, played by Leo Carrillo, was my favorite character, the funny guy. Westerns have just about vanished from TV now, the younger viewers can’t even relate to them at all. I have a few DVDs of the earliest “Gunsmoke” shows. IÂ think they are theÂ best TV westerns of all, especially the episodes that Sam Peckinpah wrote and that Robert Stevenson directed.

In comics this week, pgs. 3 and 4 of Flebus in “Thumb’s Up”, with a hilarious depiction of corporal punishment by Jim Tyer. Also, the last two pages of Sourpuss in “Moving Day”, evidently by Tom Morrison, veteran Terry storyman and the TV voice of Mighty Mouse. The drawing style is very close to Kuwahara’s, but I defer to Milton Knight’s opinion that the story is Morrison’s. Milton really knows Terry comics and the cartoonists’sÂ graphic thumbprints. Maybe one of you collectors out there can send me a scan of a page of Bob Kuwahara’s comic book work, I feel he must have done some. Marvelous Mike wraps up the Madame Le Moult story in episodes from Dec. 3, 1956 to Dec. 8th. Mike’s psychic abilitiesÂ actuallyÂ mystify HIMÂ in this story! Krazy Kat from April 24, 1939 to April 28, 1939Â (April 29th is missing) concerns “Mimi”, one of the strangest characters in the strip. Mimi is a French animal of some kind, perhaps a Poodle, who speaks in broadly accented French/English. Everyone in Coconino County seems a little in love with her, in this week’s strips, Krazy Kat is jealous of her. Mimi seems out of place in the desert environment of the Navajo Tribal Park, but most everything in Herriman’s world is one “brick” short of a monument. 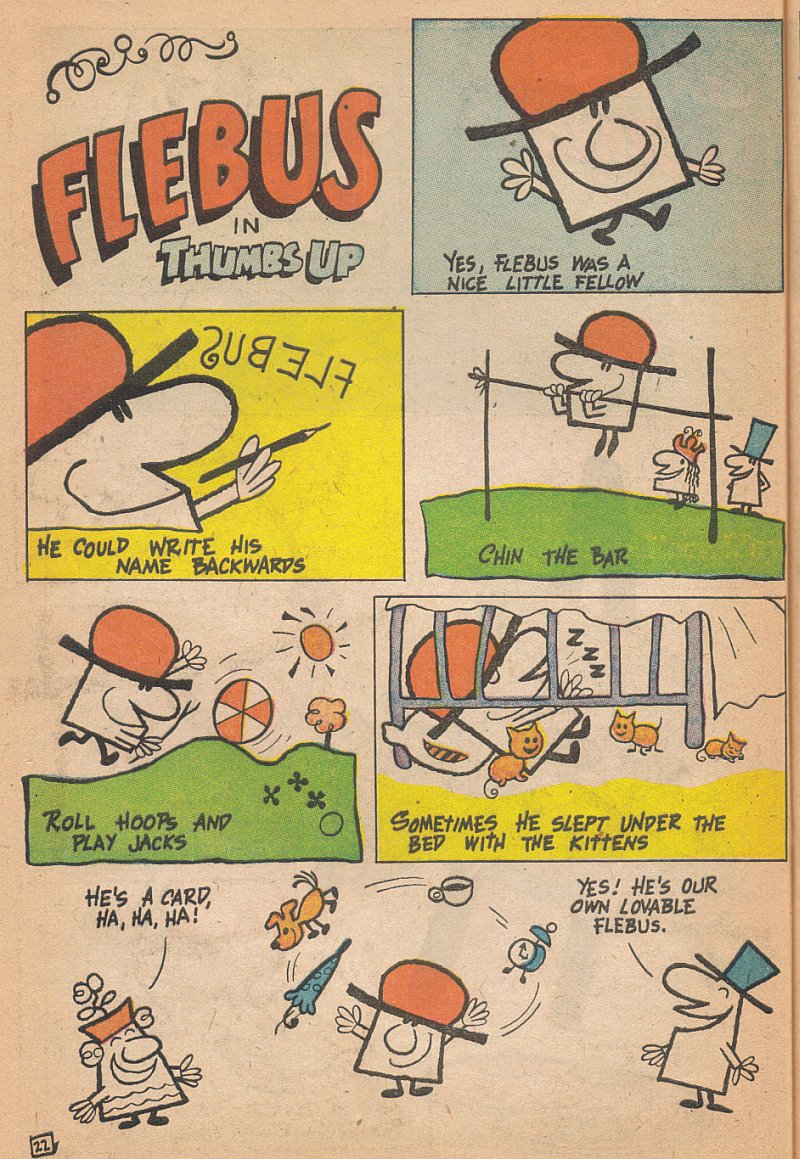 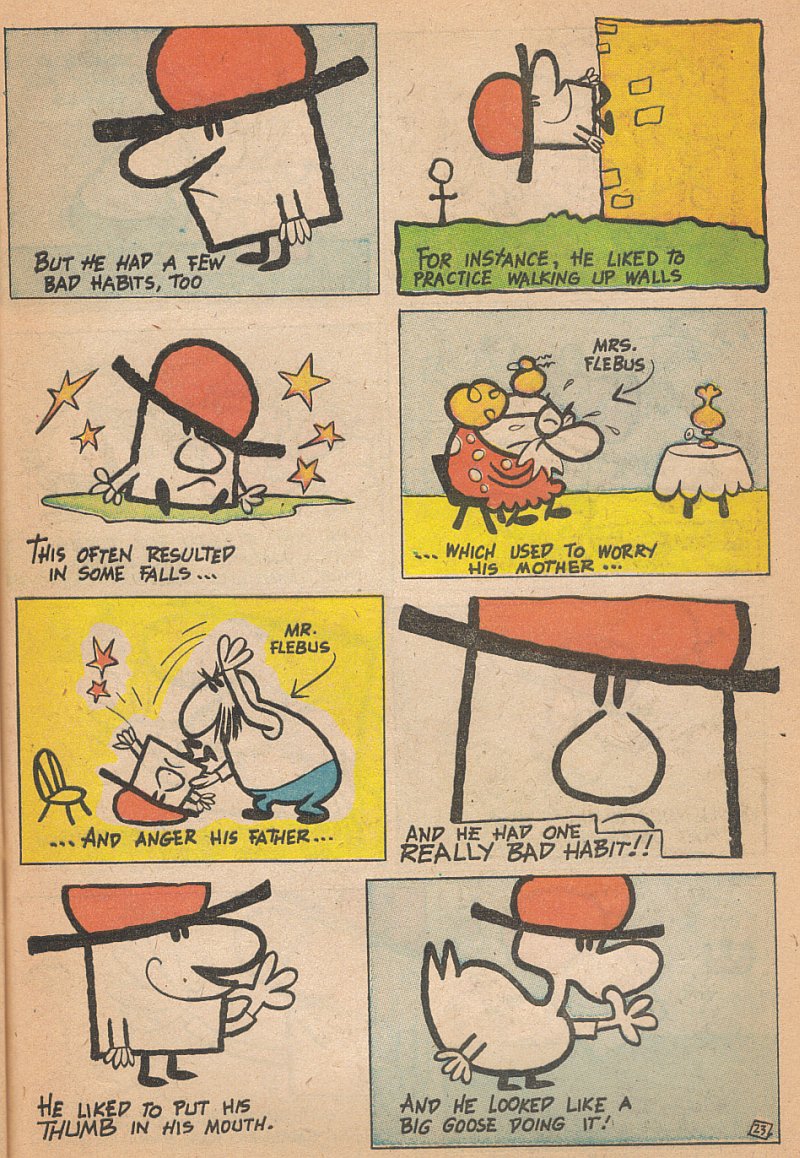 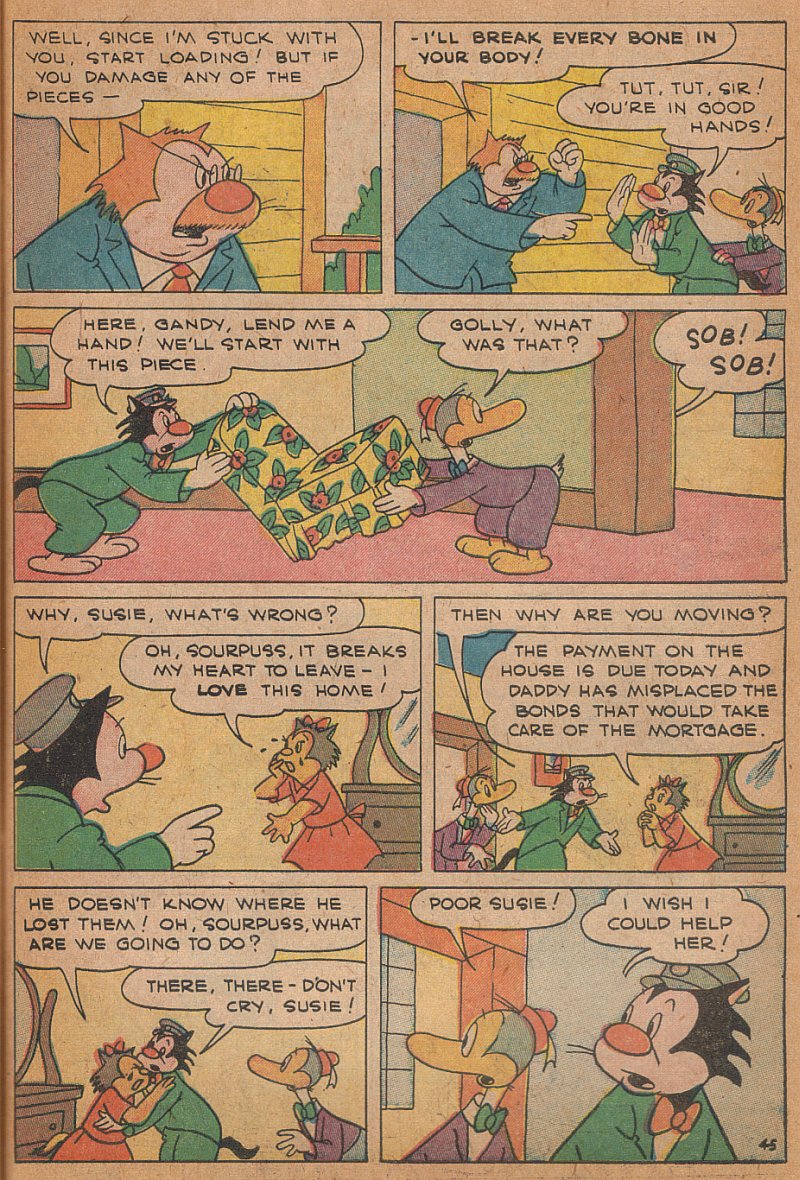 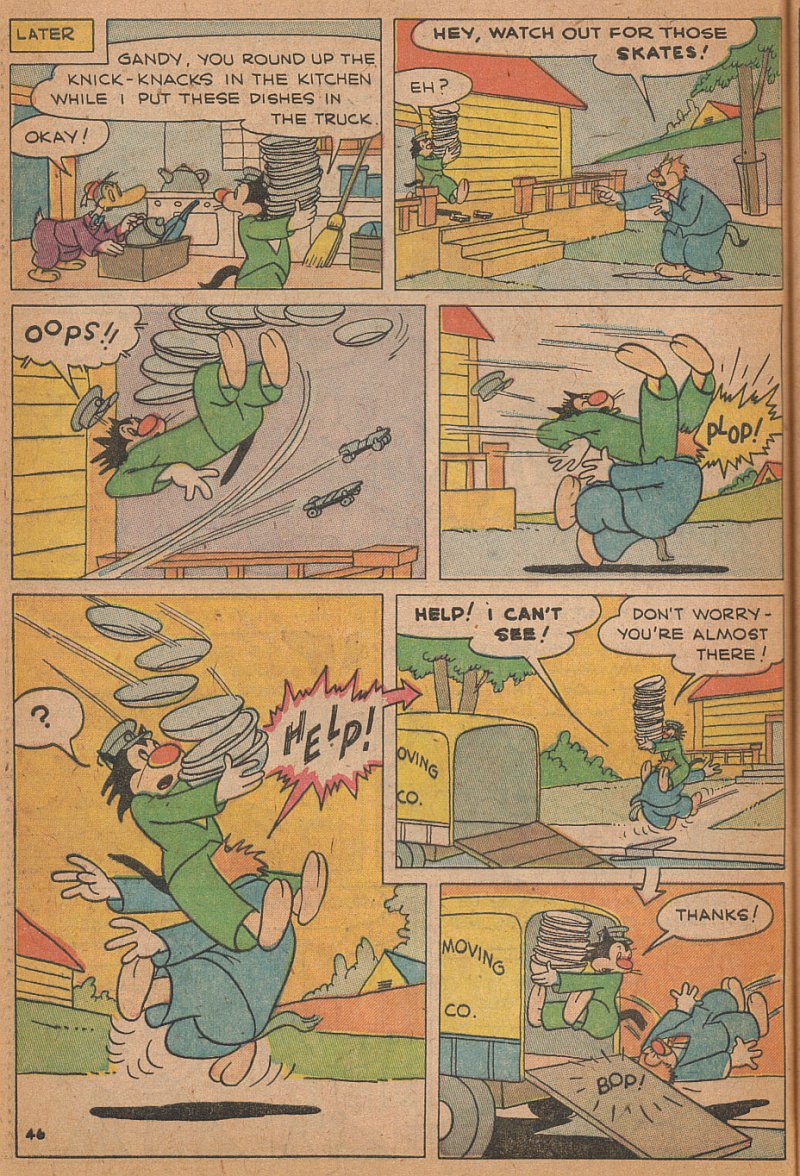 Hi everyone! I’ve been reading a proof copy of a new autobiography by Iwao Takamoto and Michael Mallory called: “Iwao Takamoto: My Life With A Thousand Characters”. It’s going to be published next year by the University of Mississippi. I will admit that I’m not the greatest fan of Iwao’s character designs, but I have a lot of respect for him as an artist. When you read the account of his life, including his experience in Manzanar internment camp during World War Two, you can’t help but empathize with him. I don’t want to reveal too much about the book right now, but I thought it was worth my time to read it. Watch for it next year! THIS year, get yourself a copy of the new Baby Huey comics collection which was compiled by Jerry Beck and Leslie Cabarga. It’s a real trove of Huey art and lore, the reproductions are from high quality stats made from the original artwork and there are lots of Dave Tendlar and Marty Taras pages along with excerpts from interviews with these two great cartoonists. Pick it up if you can, I’m really enjoying it. Marty Taras did that wild scene in “Quack A Doodle Doo” (1950) when HueyÂ pulls the fur off Mr. Fox’s head and the fur resembles a mask! The arcs and knowledge of weight and timing delay makes this scene fun to watch. Marty was one of the greatest New York animators, and his comics are very good too.

This week’s comics are the first two pages of Flebus in “Thumb’s Up” from a Mighty Mouse Fun Club Magazine. Of course it’s drawn by Jim Tyer, no one drew Flebus with as much flair and comic expression as Jim. When I was a child, I used to draw Flebus over and over again.Â He seemed so simple to draw, just a walking head really. I could never get him as funny as Tyer made him, Flebus is a lot harder toÂ get downÂ thanÂ you’d think. I have also re-printed the third and fourth pages of Sourpuss in “Moving Day” from the Mighty Mouse Fun Club Magazine. I still haven’t heard from anyone about whether this isÂ Bob Kuwahara’s art or not. Please let me know what you think. 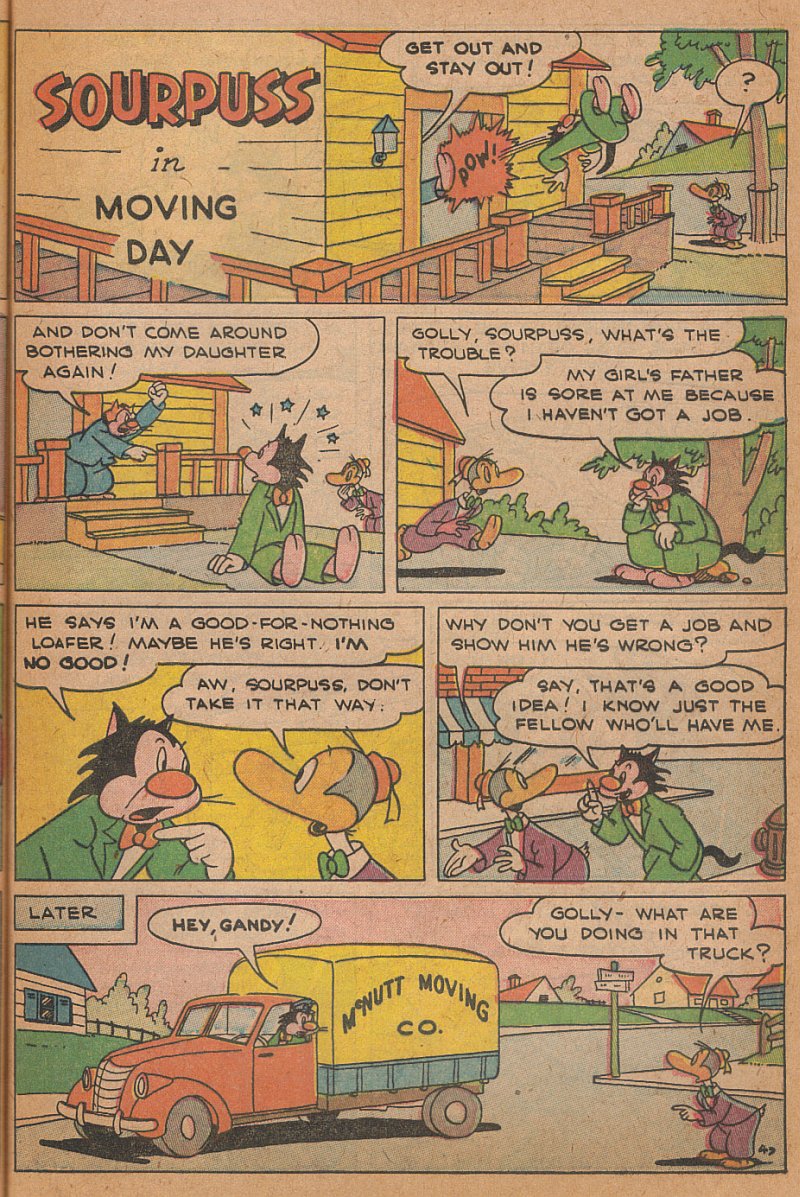 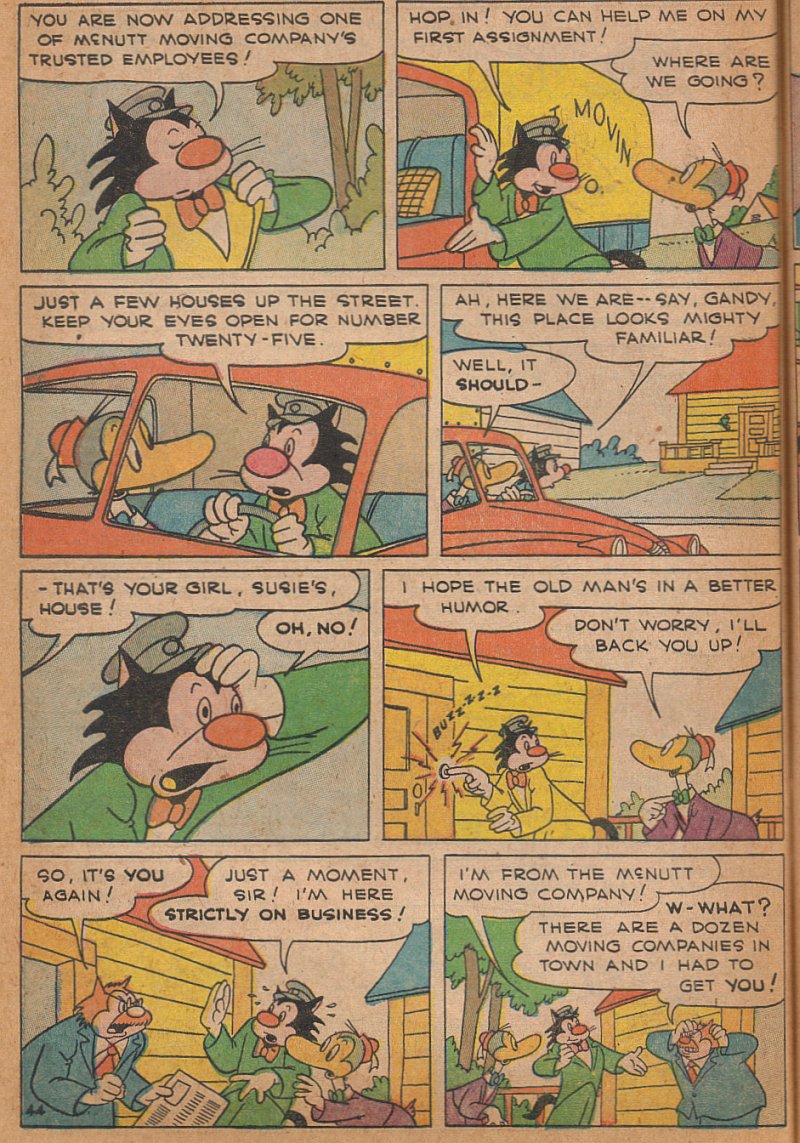 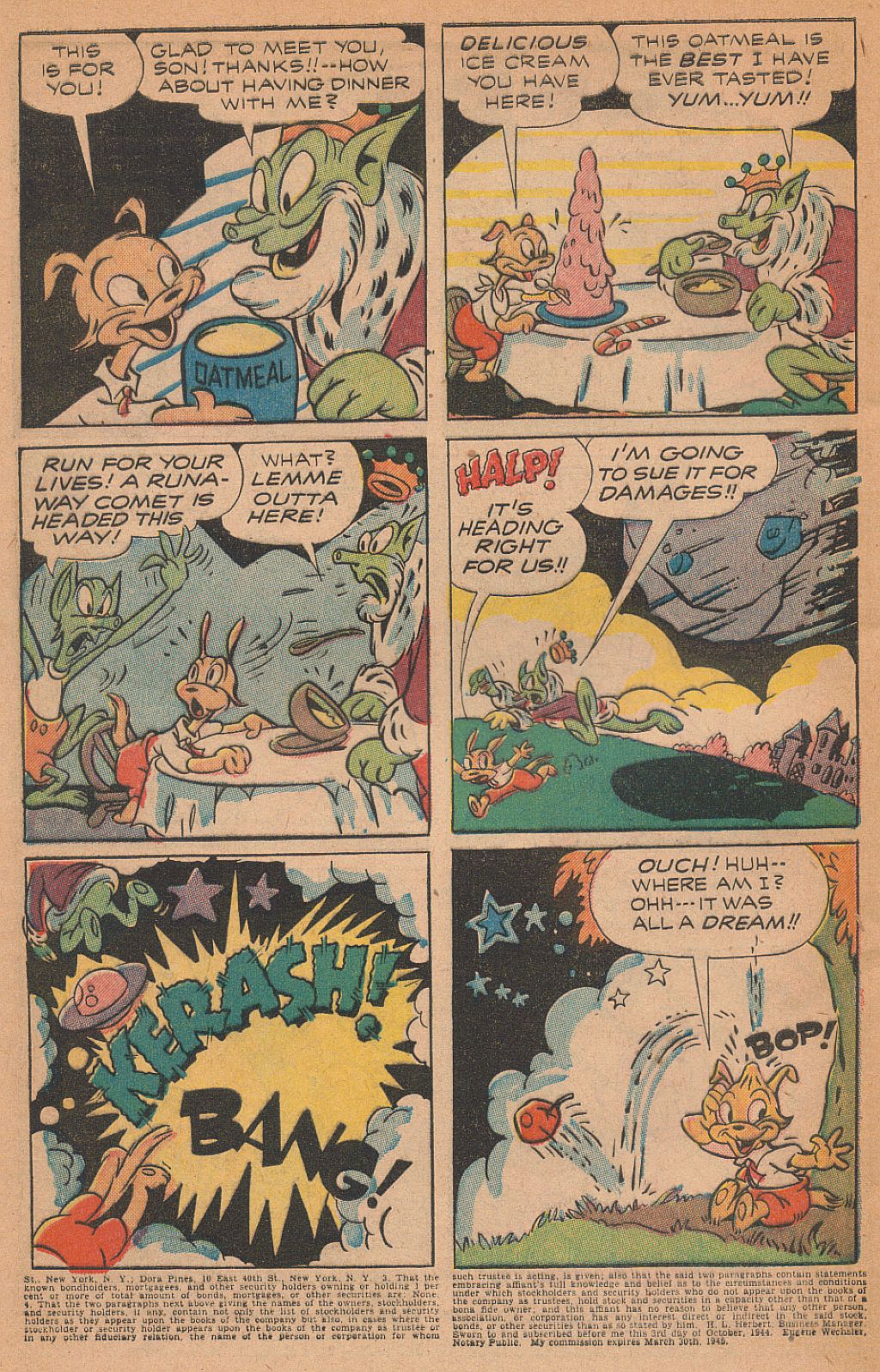 Hi Folks, this week I’m going to ask a few questions about Bob Kuwahara, who drew the Marvelous Mike strip that we feature each week. He worked for Paul Terry in New York and later was part of the Gene Deitch Terrytoons and Bill Weiss shops, where he created Hashimoto the Mouse for theatrical release.Â I think heÂ also contributed to the St. John Publishing and Pines Terrytoons comics, drawing mainly Gandy and Sourpuss stories. I’m reprinting the first two pages of a Sourpuss story called “Moving Day”, in an attempt to nail Kuwahara’s contribution. Is this his drawing, and writing too? It sure looks like it to me. Marvelous Mike is a bit more ambitious in the staging and story department, but it paid better than the comic book work and was Bob’s personal creation. If any of you Terry experts would help me out on this, we fans of obscure panels would love to find out!

In addition to “Moving Day”, I’ve reprinted the final page of “Tippy Takes A Trip” from Coo-Coo Comics #16, March 1945, drawn by Jim Tyer: Tippy trades Oatmeal for Ice Cream with the Star King, but wakes up Issac Newton style. Marvelous Mike this week is from 11/19/1956 to 11/24/1956, Mike is determined to expose the fake mystics that have moved in next door to the Crumps: Madame Le Moult and Cie.Â The Mike episode from 11/22 was missing from the Post-Dispatch microfilm, so I substituted a better scan of the 11/3/1956 strip. Â Krazy Kat is from 4/10/1939 to 4/15 this week, with an obscure set of jokes revolving around “gloom clouds”. Sometimes these clouds are generated by emotion, and sometimes they are faked by smuge pots. Any California or Florida resident is familiar with them, they keep the citrus trees warm on frosty nights. This is certainly one of the more mysterious KK sequences. Even Ignatz’s brick is gloomy at the end of the week’s strips.

Any comments, just post below, or write to me at blogmolasses@att.net. Please write especially if you know anything about the Bob Kuwahara Terry comics! 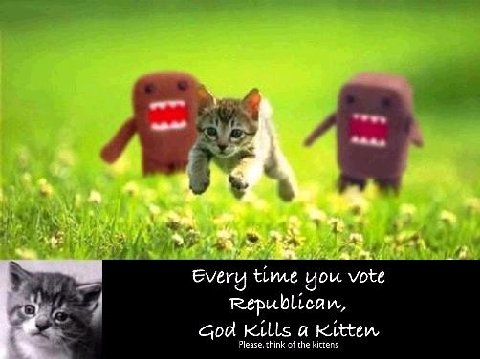 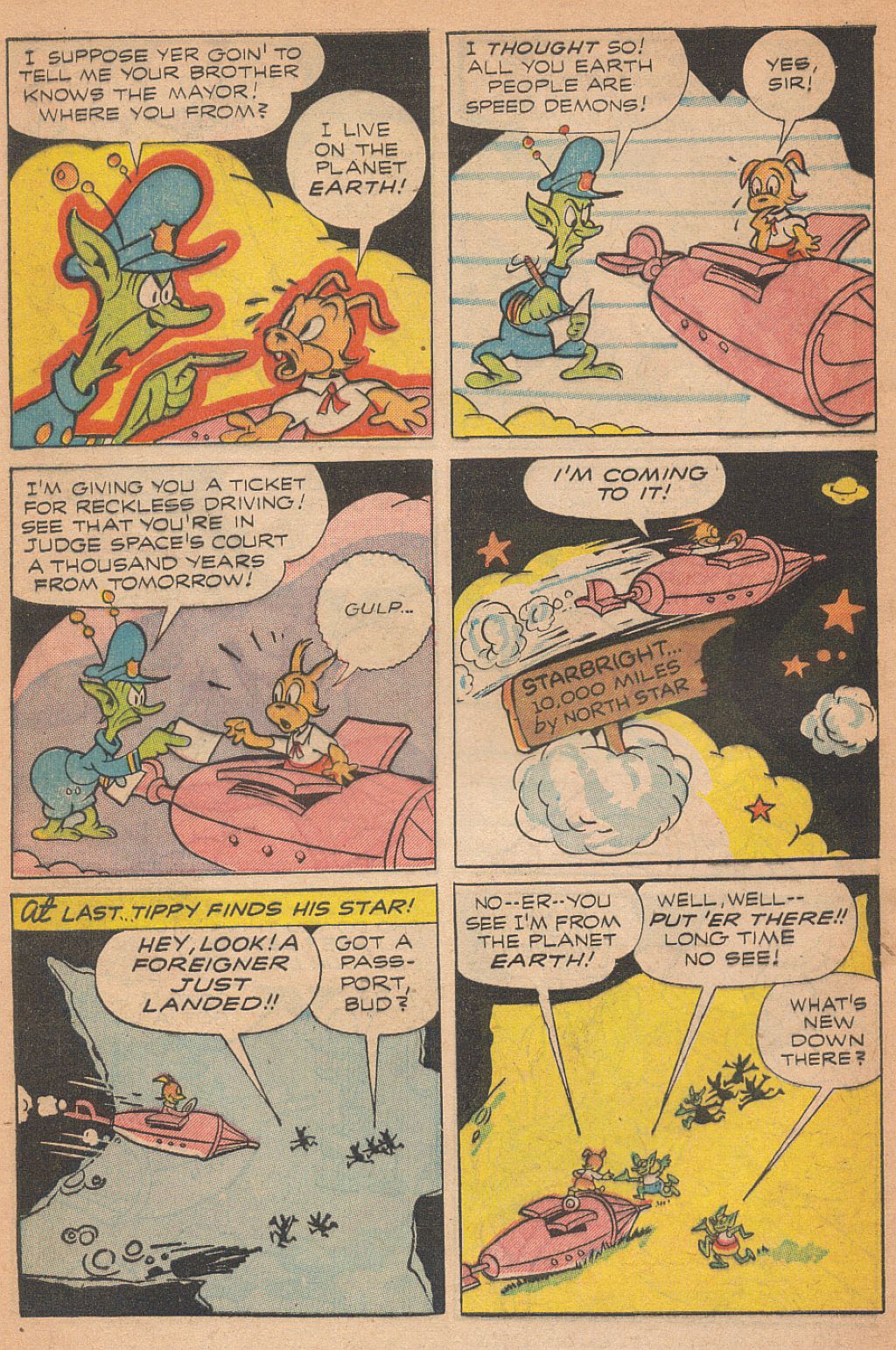 So, don’t just sit there, get down to the polls! Please take something to read with you, the lines could be long; maybe you can read this blog while you are waiting for a Diebolt if you have a Blackberry or Laptop. Above all, don’t kill any kittens. Please check your ballot carefully after voting, we’re trying not to let the Repub-bots steal another election.

This week’s comics are “Tippy Takes A Trip”, pages four and five from Coo-Coo comics #16, March 1945, art by Jim Tyer. Tippy comes to the star of his dreams, where the inhabitants want to trade candy for spinach and oatmeal. Marvelous Mike this week is from 11/12 to 11/17/1956 and concludes the “Relaxo” storyline and begins a new tale, “Madame Le Moult”. It looks like vaguely sinister “Cold War” types are moving in next door to the Crumps.Â  Krazy Kat is from 4/3 to 4/8/1939. The first three strips are about Krazy Kat kneading bread dough from every angle to avoid back strain, and the week concludes with Ignatz sprung from jail by door mice! Garge loved that pun. Speaking of puns, I’ll be “Barack” next week, remember to go to the polls and vote!

Â Â Â  Tues. Night, Thanks for not killing the kittens, fellow voters! I hope Barack Obama will be a great President!