Â Thanks to Yowp, who now has two blogs, which touch on animated cartoons and related topics, we have the first three weeks of the Barker Bill daily available to read. If you want to see the first week, from 9-27 to 10-2-54, head over to the new Tralfaz blog: http://tralfaz.blogspot.com/2011/11/barker-bill-by-bob-kuwahara.html. There you will be able to see the first week of the strip. I’ve reprinted the second and third weeks above, 10-4 through 10-16-1954. The first weeks involve Barker Bill’s efforts to save his circus from going under by getting into the race horse game. Puddy the Pup’s ability to speak English (but only to Barker Bill), together with his brilliant mind, come into play here as well. The Winnipeg run of the strip is much better than the Greensburg one I started with, having much fewer dropouts in the art. So, I’m starting over. Make sure you visit Tralfaz and Yowp’s blogs often. He almost always has something interesting to read.

Felix (4-8 to 4-14-1935) lands on the desert island and busies himself trying to survive. He devises kites and sends them up, hoping to attract the ship’s attention. In the Sunday, Felix controls a dog’s dream invasion of Dreamland, conjuring up a human skeleton!

Krazy (2-17 to 2-22-1941) has a special guest this week. A scotch terrier with a very thick brogue, compares notes with Mrs. Kwakk-Wakk and all the prominent citizens of Coconino, concerning high-class social connections. In the 2-22, the scotty reveals that he is Fala, President Roosevelt’s famous dog. This storyline must have appealed strongly to Garge Herriman, as he loved scotch terriers as well. 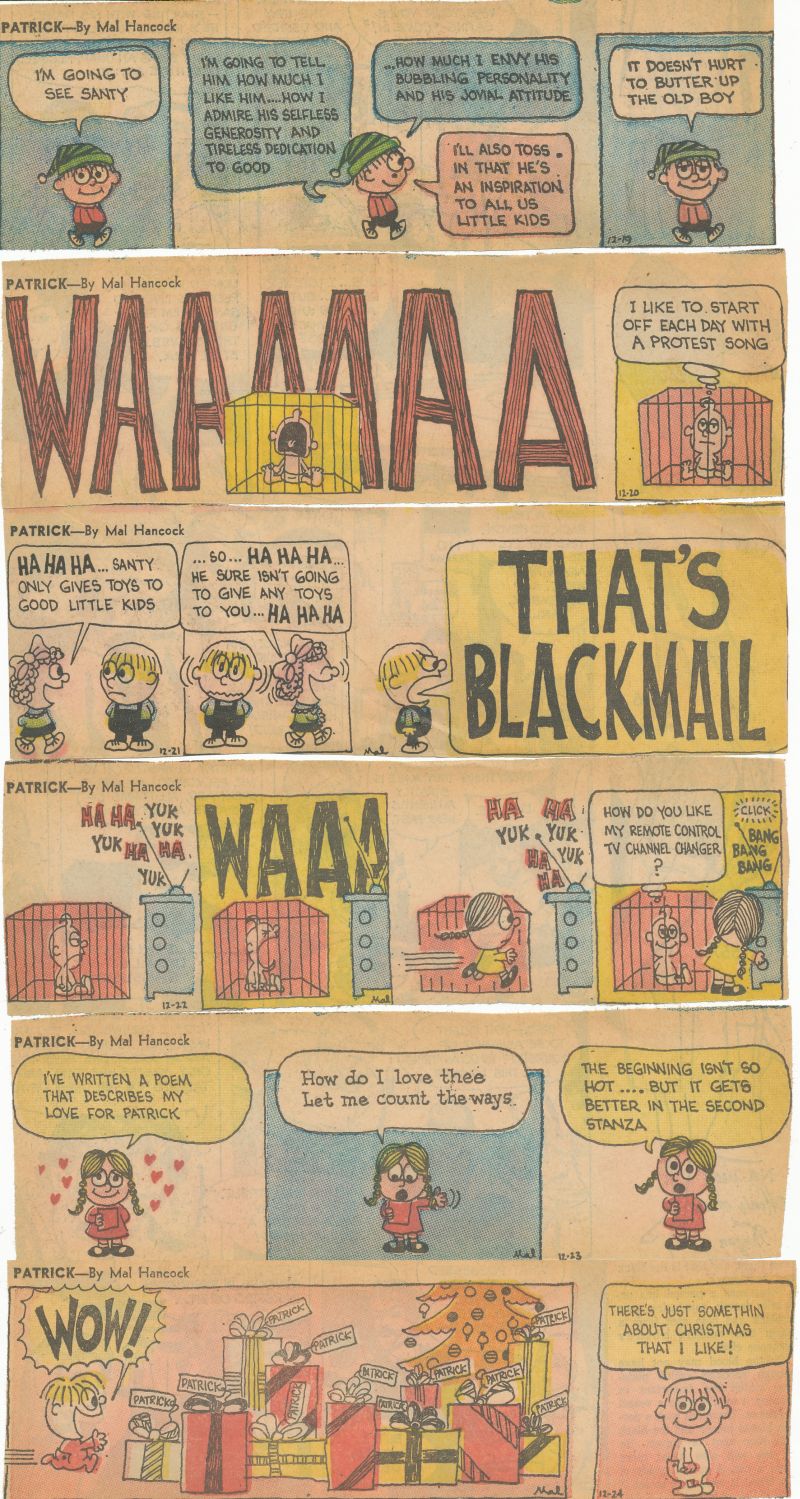 Happy Thanksgiving to everyone! Jerry Beck and I didn’t have a table at the CTN Expo as it turns out, and I didn’t stick around. Maybe next year things will work out better, and I’ll have some interesting artwork to sell. Friends who never comment on my blog tell me that they really enjoy it and read it regularly. It’s very gratifying to be reaching so many good folks! Keep your bicarbonate handy.

One of the “Holy Grails” of cartoon comic strips turned up in the Google News Archive! Direct from the Greensburg Daily Tribune we bring you some of the dailies that appeared in 1954-55, signed by Paul Terry, but drawn by Bob Kuwahara. Bob created “Marvelous Mike”, which has been reprinted almost complete here on this blog. The “Barker Bill” strip is a “hoomerous kontinooity”, with a touch of fantasy.Â I’m not sure exactly when “Barker Bill” started, but this strip from Nov. 8, 1954 is the earliest one in the Greensburg paper. We start mid-story as Bob Kuwahara introduces the “Gelt” from the African Veldt, a strange little character who does astonishing things (like eating paper money) to make Barker Bill’s top hat fly off. You will note that his hat flys off in nearly every strip, so he’s easily astonished. Puddy the Pup can talk in these strips, and is pretty intelligent, but he willÂ only speakÂ with Barker Bill. This reminds me of “Marvelous Mike”, the intelligent talking baby who would onlyÂ converse withÂ  his sister at first. The Greensburg paper only printed the strip four days out of the week, but at least we have SOME of the strip’s run to read again. It’s a minor work, only ran about a year, and evidently there was a Sunday page. Here are the next 7 strips in the collection:

Â I’m going to try to do these eight strips at a time, due to the strange way the Greensburg Daily TribuneÂ printed them. Barker Bill originally appeared in the 1942 Technicolor cartoon “Happy Circus Days”, directed by Connie Rasinski. The early 1940’s cartoons were about as polished as Paul Terry animateds got. Barker Bill was animated principally by Carlo Vinci inÂ the ringmaster’sÂ first and only screen appearance. About 10 years later, 1953, the Barker Bill Cartoon Show debuted on CBS. This was one of the earliest old theatrical cartoon packages to appear on network TV, and created an audience for Farmer Al Falfa, Kiko the Kangaroo, Puddy the Pup, Dinky Duck and the other citizens of early 1930s Terrytown. Evidently, the show was successful enough that CBS made their offer for Terry’s studio and film backlog, which Paul Terry sold to them in 1955.Â Even though Paul Terry did not draw the Barker Bill strip, he DID drawÂ Alonzo the Dog, here’s one of them:

Â It’s from June 26, 1909, you can see more of them if you go to Allen Holtz’s “Strippers Guide” blog. Click the link over to the right hand side of this page.Â  I love the first and last panel in this strip, it shows the roots of Paul Terry’s slightly off-kilter drawing style that Jim Tyer eventually brought to imperfection in the Terrytoons of the 1950s. Paul’s brother John also worked on Alonzo in 1909. I don’t know if Paul Terry’s byline appeared on any other comic strips, let me know if you’ve heard of any.

In the Felix strip, this time from 4-1 to 4-7-1935, Felix’s keg is pulled from the ocean by the ship’s crew, who discover their gold tied to it. However, the keg containing Felix is cast back in the drink without even being opened. Felix’s latest chance to be a hero mascotÂ is scuttled. He winds up on a jungle island, populated by strange birds. In the Sunday, Felix is still in Dreamland and manages to free himself from his bubble prison, saying his favorite word, “fine”, three times in one strip. The “Laura” topper expands to a third-page this week, replacing “The Sunny Side” feature.

Â Krazy Kat, from 2-10 to 2-15-1941 has Offissa Pupp longing to become clairvoyant, or at least to read the criminal thoughts of Ignatz. In the 2-15, the Pupp wishes he could read Krazy’s thoughts, butÂ the Kat’sÂ mind is devoid of any, hence the very moody cross-hatching in the last panel of the 2-15. 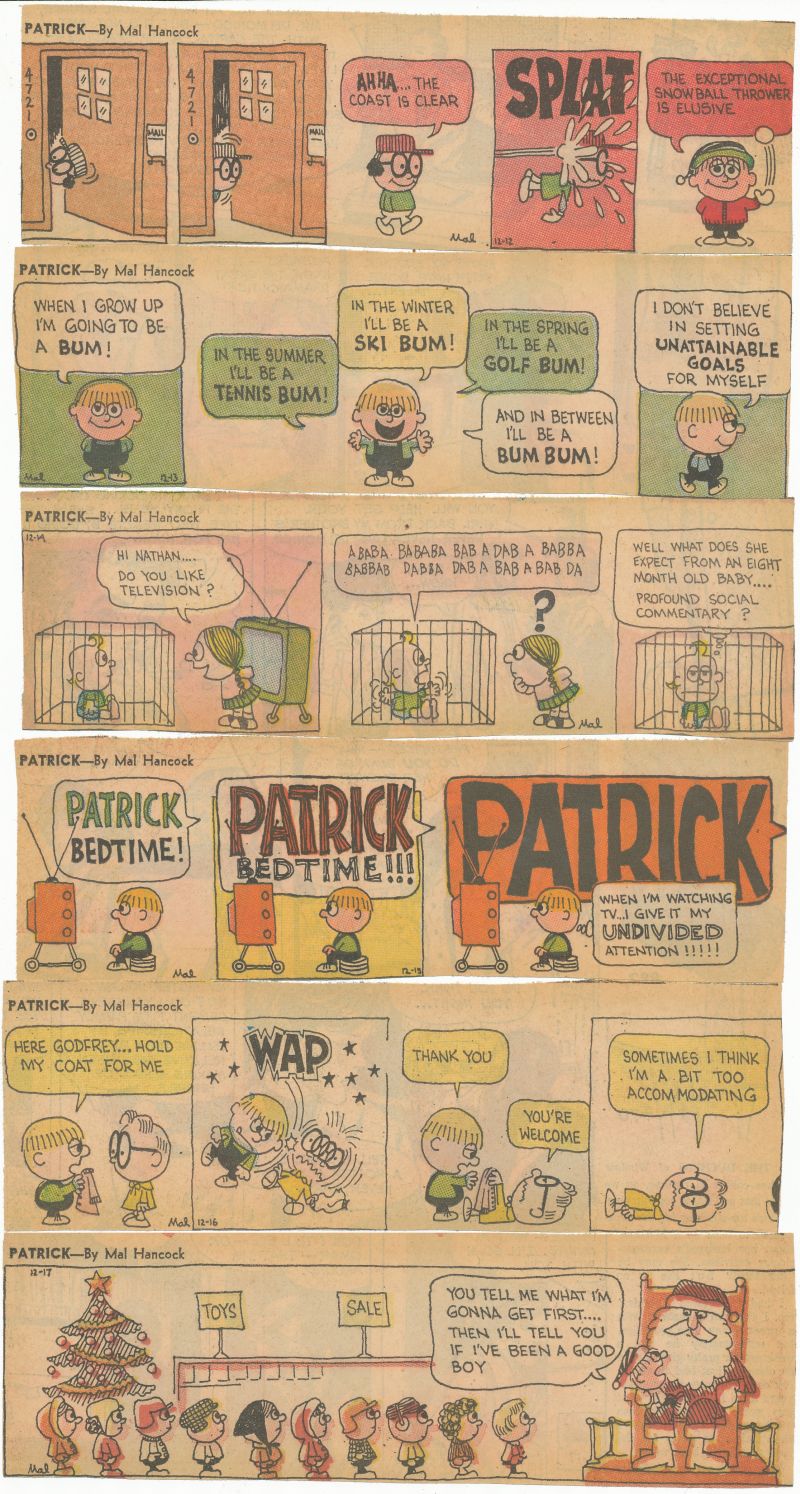 Â In the Patrick strip from 12-12 to 12-17-1966, Godfrey is clobbered twice, once by a snowball, then by Partick’s coat. Television provides amusement for both Patrick and Nathan, and Patrick tries to make a sweetheart deal with Santa in the 12-17.

With any luck at all, I’ll be around the Creative Talent Network Exposition this coming weekend, 11-18 to 11-20-2011. I’ll be at Jerry Beck’s table, come visit us there and maybe buy a cel or two from “It’s ‘The Cat'”, they make great Christmas gifts. A free DVD goes with every cel purchased. Jerry always has great cartoon books and chotskis to dispense as well. See you there! 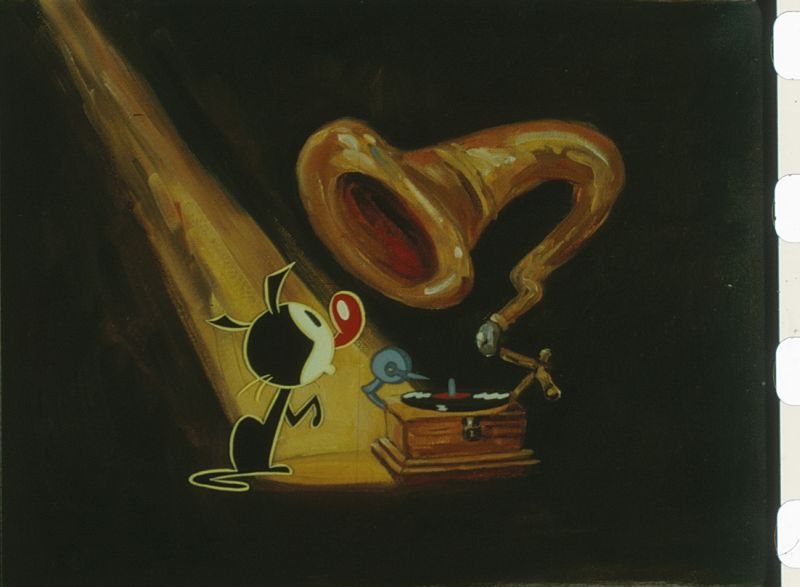 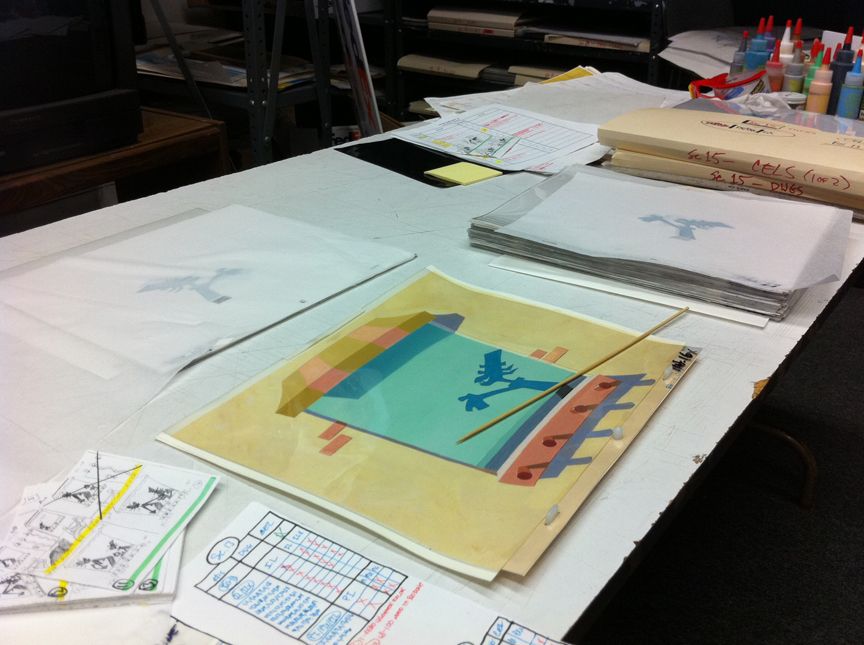 Right now, you’re probably asking yourself, “How’s ‘There Must Be Some Other Cat’ coming along? If you look above, you will see the only 35mm color material that is around right now, an exposure test frame from the “Pre-Credits” sequence, where the Cat flips a stylus on to a record played on an old gramophone. The purpose of the scene is to quiet the audience, and prepare them for the sound of an old acoustic record used on the soundtrack. The background was painted in oil by Catherine Hill, and the cel was inked and painted by Greg Ford Co. Inc. The other photograph is of a checking table at Greg’s Co. with the cels from Sc. 15 on top. The rival cat is whispering sultry nothings into Pearly’s ear in this shot where the characters are silhouettes on the window shade. It looks like there are several more scenes in the background of the photo. On this evidence, I’m basing my hopes for the cartoon’s completion. To my sorrow, it won’t be this year. This little short will have just as difficult a genesis as “It’s ‘The Cat'”. I can only hope that principle photography will begin soon. If you believe in cartoons, don’t send money (because I know you have none), but applaud real loud and think your best positive thoughts that “There Must Be Some Other Cat” can be completed. “The Cat” and I send our thanks.

Â Â Â  Speaking of exposure tests, here are a couple of frames scanned from a test shot for the “Adventures of Red Ryder” serial: 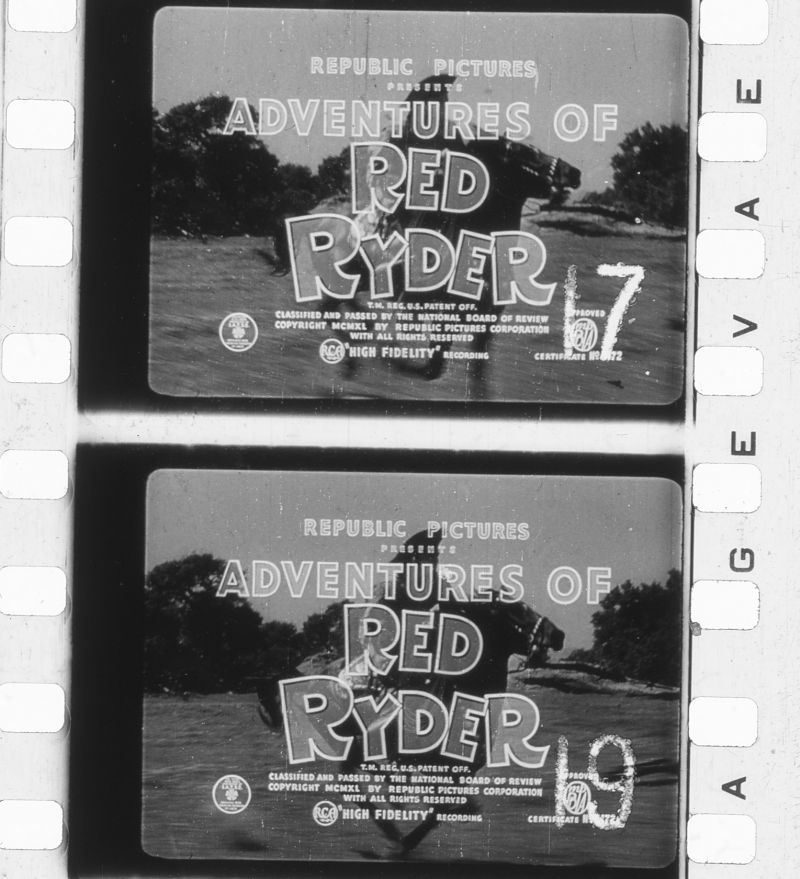 Â I’ve never had a way of sharing this little strip of film before, so thanks to these computers, you can see it. This Republic serial from 1940, starred Don “Red” Barry as Red Ryder and Noah Beery Sr., along with Tommy Cook of the Our Gang Comedies as Little Beaver. It was based on the comic strip created by Fred Harman, Hugh Harman’s brother, so there is a cartoon connection. The same year, Republic produced another 12 chapter serial, “King of the Royal Mounted” based on the Zane Grey comic strip. The cartoon connection here is that Zane Grey’s brother, Romer, was an early producer of sound cartoons with his “Binko the Cub” series from the early 1930s. They were never finished, although the artwork still exists, you can probably find images from Binko on the Web.

Â Â Â Â  As an adjunct to Yowp’s post for today, here are three out of the four Yogi Bear Sunday pages he posted, complete and in color:

Â These are from Nov. 5, 12th and 19th, 1961. I don’t have the strip from Nov. 26th, sorry. I will now scold my youthful self for failing to save it back in ’61. I especially like the Nov. 12th strip, featuring a guest appearance by Augie Doggie and Doggie Daddy. Please click the thumbnails to view at a readable size.

Felix from 3-25 to 3-31-1935, finds Danny using his Boy Scout skills to send a morse code message to the S.S. Sillatania, which picked up “One-Eye” and Spike on the high seas. They don’t have the gold they took with them, but Felix has that stowed. We’ll see if they pick him up next time. In the Sunday, Felix is still in Dreamland, in a frozen bubble from the Giant’s pipe. The King of Dreamland attempts to torture Felix with foodstuffs.

Krazy (2/3 to 2/8/1941) has a very funny continuity this week, featuring Ignatz’s indignant wife, Molly. Offissa Pupp’s jail becomes a refuge for Ignatz, as he uses it to escape his wife’s wrath. I love Ignatz’s vocal impression of the brick’s “Pow” that he uses to get thrown in jail on 2/6, and in the 2/8, both Ig and Offissa Pupp wind up in the clink to escape Molly. It’s the only time I can recall seeing the Pupp in prison. 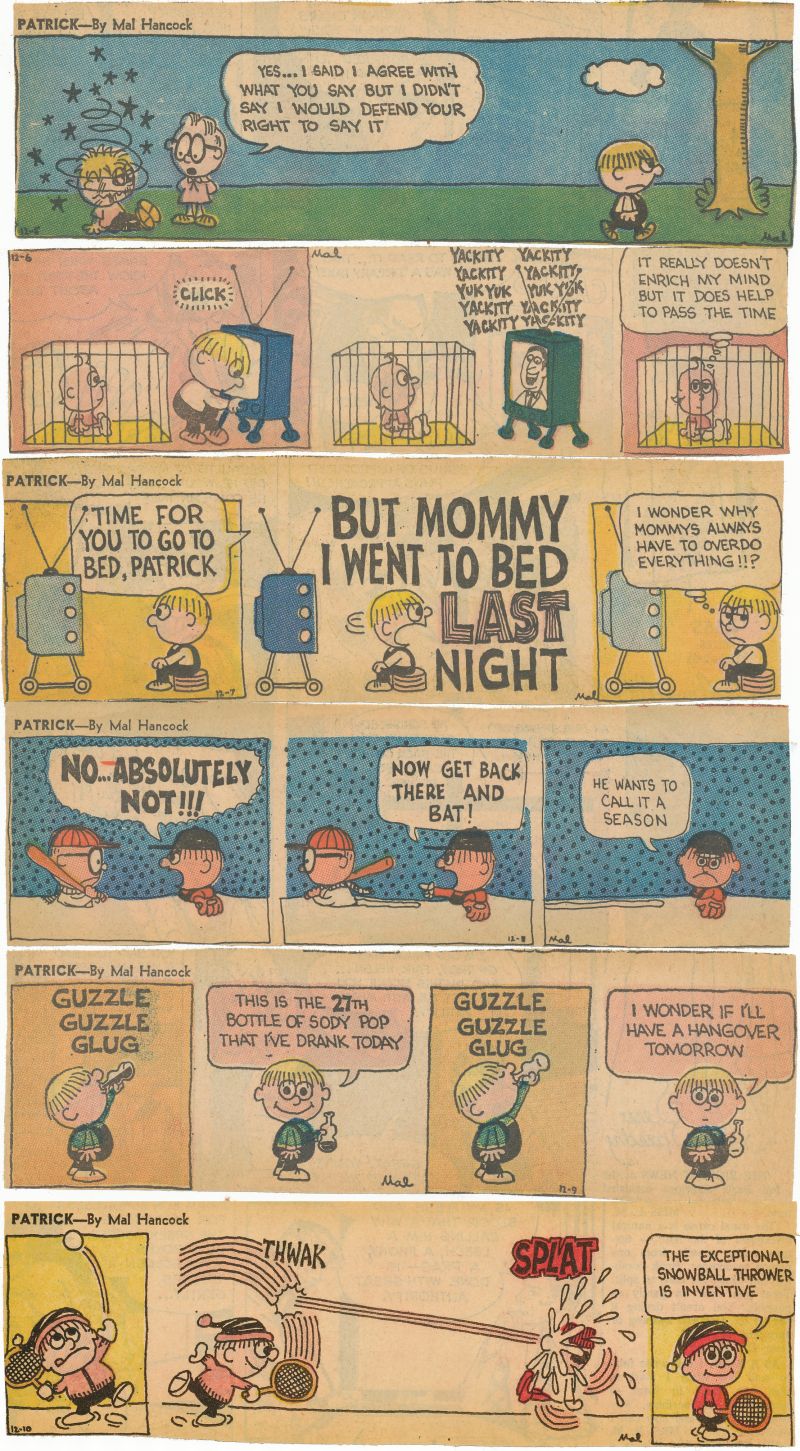 Patrick, from 12/5 to 12/10/1966, finds brother Nathan being “elevated” by television in the 12/6, and Patrick doing a sorta kinda Charlie Brown bit in the 12/8 as he chews out Godfrey for wanting to quit baseball in the deep snow. It’s amazing that Patrick is not obese from drinking 27 bottles of “sody pop”, as he confesses in the 12/9. Enjoy all the strips, folks, and think your best thoughts for “There Must Be Some Other Cat”.