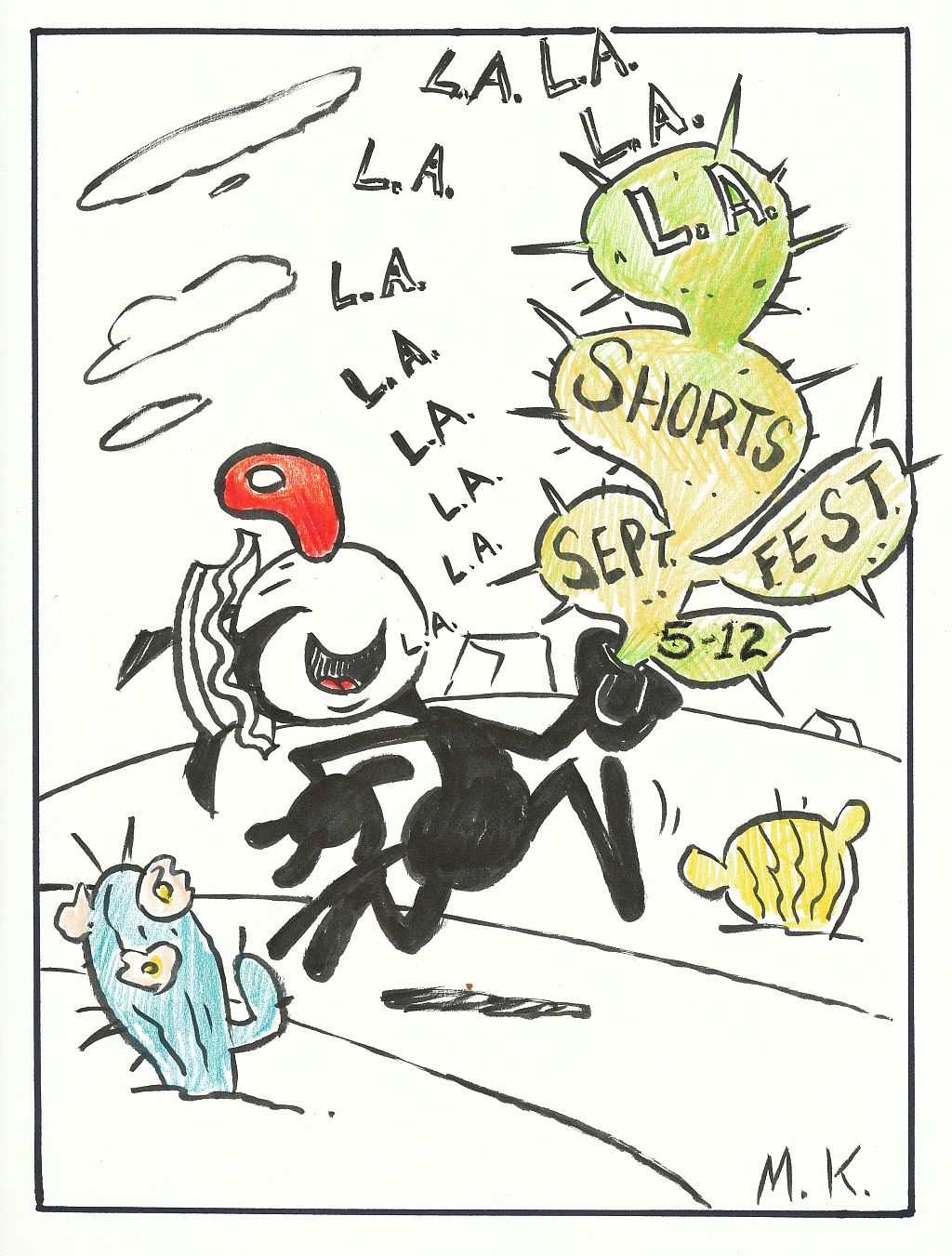 Â At last it can be told! “Some Other Cat”, formerly “There Must Be Some Other Cat”, will be having it’s world premiere at the L.A. Shorts Festival on Sept. 9th, 2013! It will be shown in a program of animated shorts (Program 22) beginning at 3:15 PM at the Laemmle NOHO 7 theaters. They are located at 5240 Lankershim Blvd. in North Hollywood, 91618. Just go to www.lashortsfest.comÂ for more information on parking and which off-ramp to take to get over there. Itza would love to have all his loyal readers there, this has been a very LONG time coming, Folks! If you can possibly get away on that Monday afternoon, you’ll be in the first west coast audience to see the short! If you feel your computer screen vibrating, that’s just Itza purring with delight. 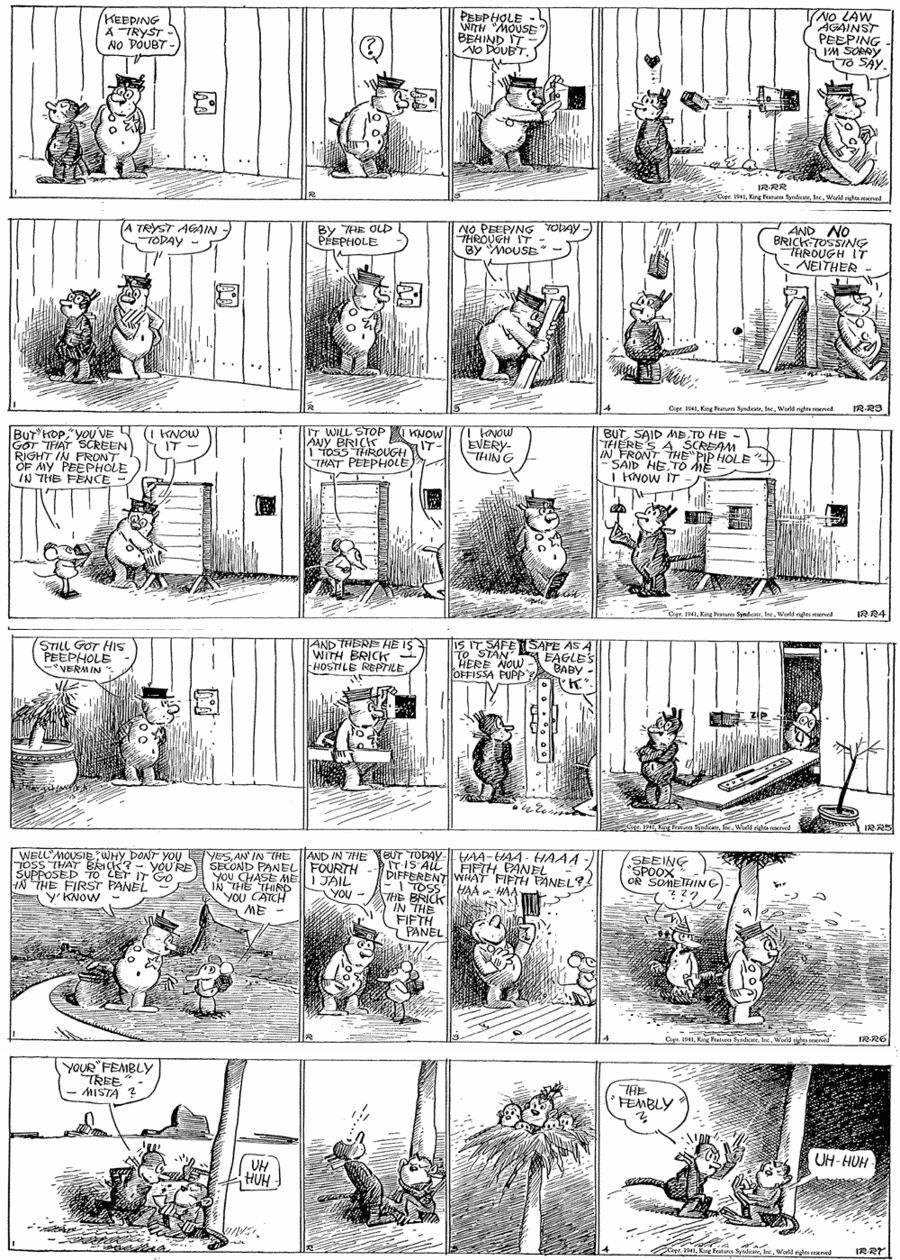 Â In Krazy, 12-22 to 12-27-1941, Garge does a four strip continuity about a brick shaped “peep hole” in the Coconino fence. I like the dead-pan expressions on both Krazy and Ignatz as Ig throws his brick through a collapsed fence board (12-25). Herriman does one of his rare insider strips in the 12-26, as Offissa Pupp and Ignatz discuss the order of the panels in a typical Krazy Kat daily, and in which panel the “Mice” will throw the brick. In this case it’s panel “5” which turns out to be off stage and Offissa Pupp is confined to Panel 4, so is once again powerless to stop the tryst. 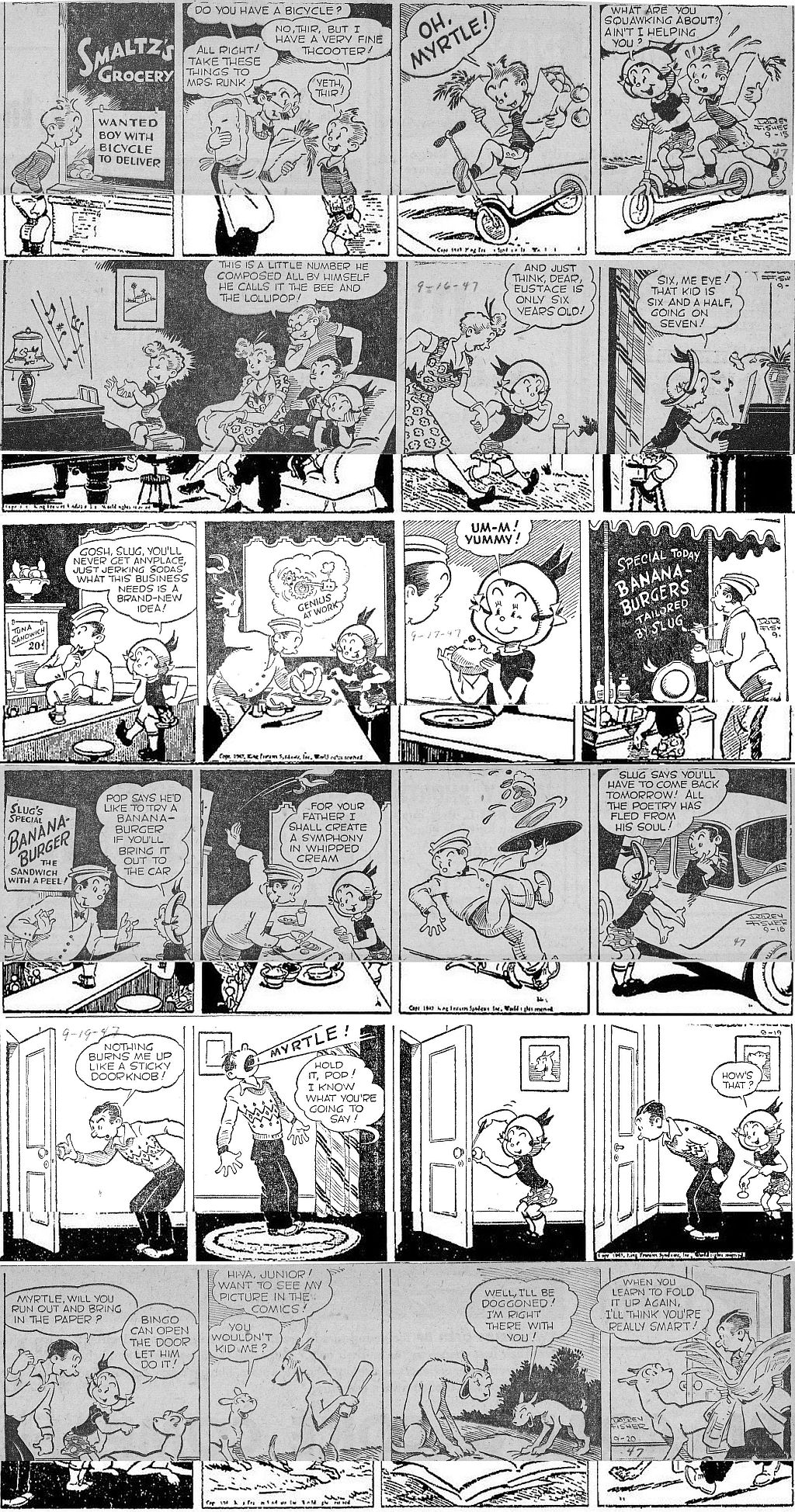 Â Myrtle is from 9-15 to 9-20-1947 this time, notice I’ve carefully matched the clipped strips to the Newspaper Archive copies to get Dudley Fisher’s complete drawings. The 9-15 continues the scooter gags from last week, and the 9-17 and 9-18 strips take place at Slug’s diner. Slug creates a new dish, the banana burger, the sandwich with a peel (Slug even slips on one).Â Slug was way ahead of his time, pioneeringÂ Vegan cuisine in 1947! The best strip in this batch is the 9-20, as Bingo goes out to fetch the paper and winds up readingÂ the “Myrtle” stripÂ with Junior. 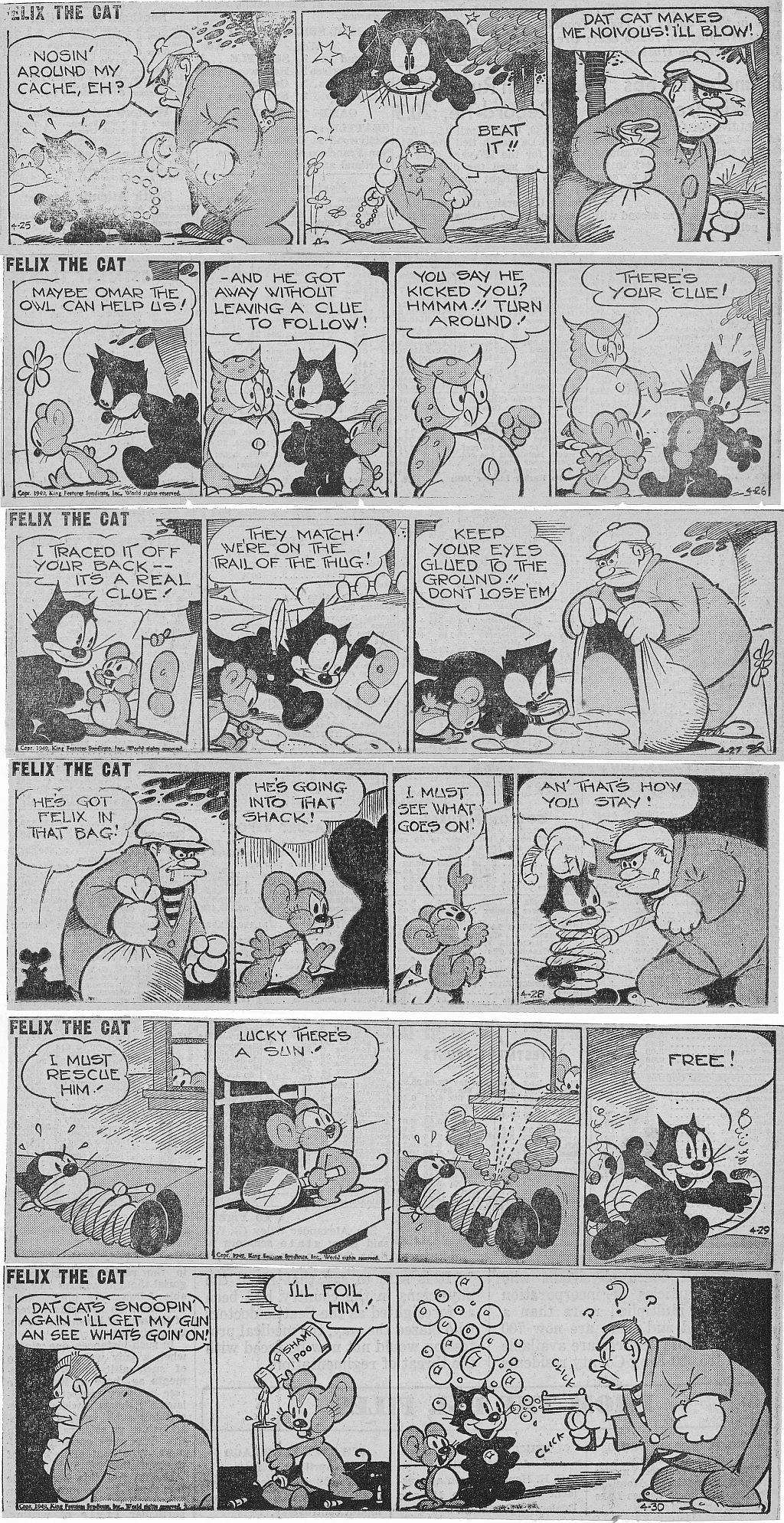 Â Felix is from 4-25 to 4-30-1949, as Felix and Moocher Mouse continue to chase the pearl thief as private detectives. My favorite panel is the second one in the 4-25, as the thief kicks Felix into the “camera”. Omar the Owl proves to be better at deductive reasoning than Felix and Moocher as he points out the thief’s shoe printÂ on Felix’s back in the 4-26 strip. Moocher and Felix work together in the balance of the week’s strips to foil the thief, quite a contrast to the previous strips where they were doing their “Tom and Jerry” gags.

See you at the Laemmle NOHO 7 very soon! 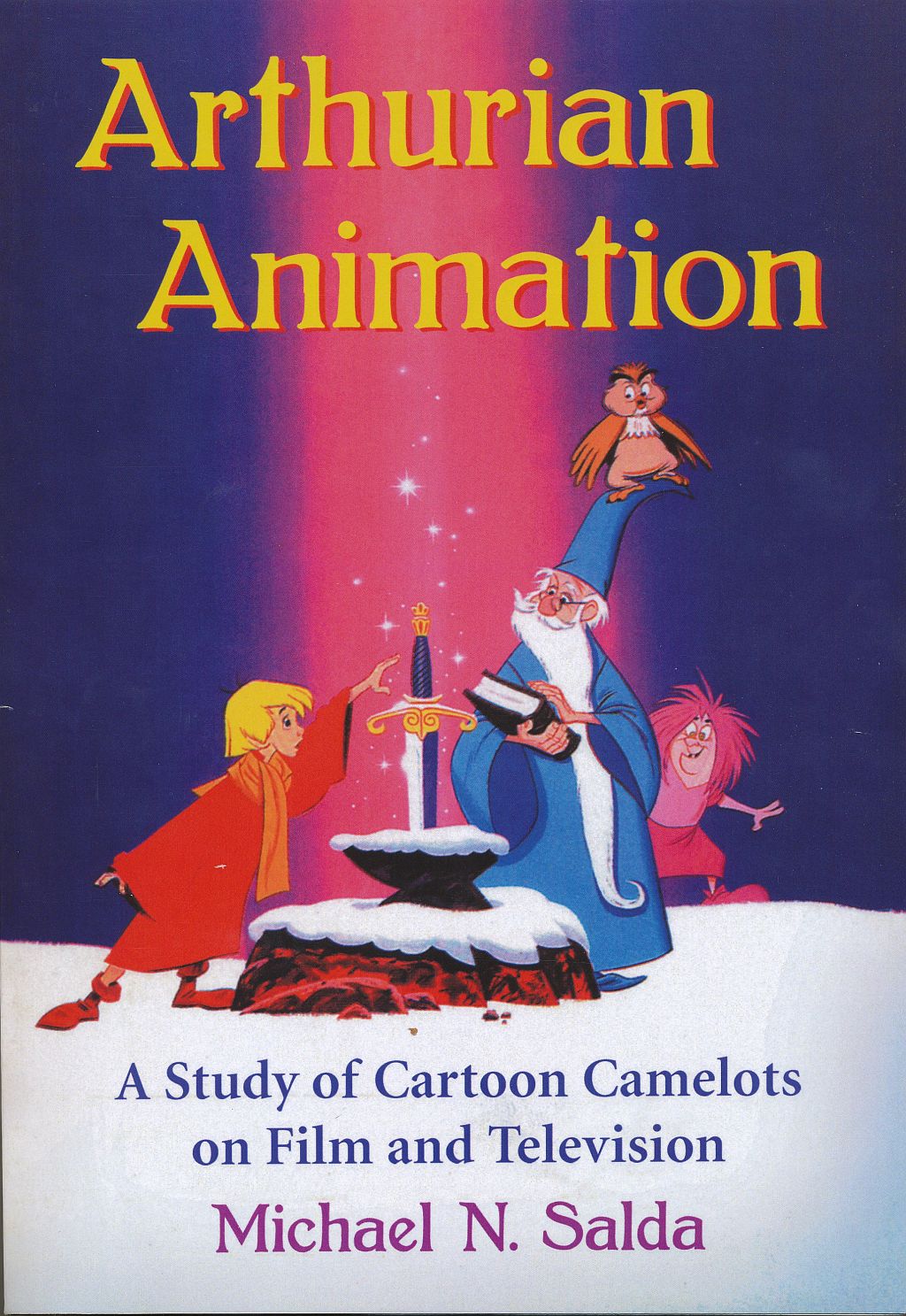 A new book by Michael N. Salda has just been published by McFarland and Company, ARTHURIAN ANIMATION. I received a review copy, courtesy of Michael, and I’m proud to say that the second chapter of this book was made possible by Hugh Harman’s archives, of which I am the custodian. Hugh’s script treatments for his proposed feature-length film, “King Arthur’s Knights” and the cost analysis for the project came in handy for Michael in writing his book on “Arthurianimation”, as he coins the term. This is an analysis and chronicle of all animated cartoons which derive from the Thomas Malory, Henry Gilbert and Mark Twain versions of the King Arthur legend. They range from the beginning of sound, (“Bosko’s Knight-Mare”) to 2002’s “Sir Gawain and the Green Knight”, an eduational film. I guess my favorite chapter is the first one, which gives Hugh Harman credit for being the first to animate a cartoon featuring the King Arthur legend. I haven’t read something this serious about Bosko inÂ  quite some time, and it won me over (I’m still a big Bosko fan). When you read the second chapter and see the summary of all the narrative sequences that were supposed to be in Hugh Harman’s “King Arthur’s Knights” feature length cartoon, you get a sense of why the project never found backers. The main reason was that there is so much emphasis on who did what to who where, that the “why” doesn’t surface. Without any dialog excerpts from the script treatment, we don’t gain much insight into the personalities that the lead characters Gareth, King Arthur, Lynette, Sir Modred, Merlin, Morganna and King Ban would have had. There are some of the original character sketches by Robert Stokes included, worth the price of the book, Stokes was really a master artist, and a prime animator of the Snow White character in the Disney film, among many other assignments. His drawing of Lynette looks quite a lot like the feature cartoon character Cinderella! The screenplay for the feature winds up with some World War Two era pro-British Union Jack waving, dating the story badly.Â Â Â Â Â Â Â Â Â Â Â Â Â Â Â Â Â Â Â Â Â Â Â Â Â Â Â Â Â Â Â Â Â Â Â Â Â Â Â Â Â Â Â Â Â Â Â Â Â Â Â Â Â Â Â  The book is quite well-written, not very many mistakes. There are some odd omissions here and there, most notably, the story line of “The Land of the Lost” (Paramount 1948), is said to be derived from Isabel Hewson’s 1945 children’s book. Although the story of “The Knives of the Square Table” is in that book, the tale originated from an earlier radio script that Hewson wrote for the weekly series. In listing the Arthurianimation films of the 1950s, Michael leaves out “When Mousehood Was In Flower”, (Mighty Mouse, Rasinski, 1953) one of the funniest Knighthood cartoons ever made, much funnier that the Disney short, “A Knight For A Day”, to which Michael devotes two pages. In Chapter 4, Michael goes to a great deal of trouble to name a lot of animated projects both TV and Theatrical, which featured Merlin the Magician from the King Arthur stories. He doesn’t seem to know about Mervyn the Magician, from the Sugar Bear episodes of the “Linus the Lionhearted” TV cartoons. The short tempered Mervyn, voiced by Carl Reiner, certainly acted like a refugee from Arthurian legends, as he battled Granny Goodwitch with magic spells and potions. I really like the critical history Michael gives of Walt Disney’s The Sword in the Stone, in the first part of Chapter 5. A principal flaw in the feature’s story is that the animal transformations that Merlin puts Wart through, don’t really teach him very much, whereas in T.H. White’s book, they educate the budding Arthur thoroughly. Walt Disney evidently did not have very high regard for the way The Sword in the Stone turned out. Get the book and read Chapter 5! Full disclosure, the book has 10 chapters, 5 of which detail the King Arthur cartoons and so-called animated films of the 1970s through 2002. I have not fully read the last five chapters, since I don’t have a rooting interest in the stuff of that era, but can recommend the first half of the book for all the never before published Hugh Harman history in it. It’s wonderful to be acknowledged for the materials I made available to Michael, I was glad to help, I know Hugh would have wanted me to. You may order this book ($45.00), through the McFarland website, www.mcfarlandpub.com. Their order line is 800-253-2187. You can also order the book as an ebook ($16.75), through Google Play, Amazon Kindle, and many others. 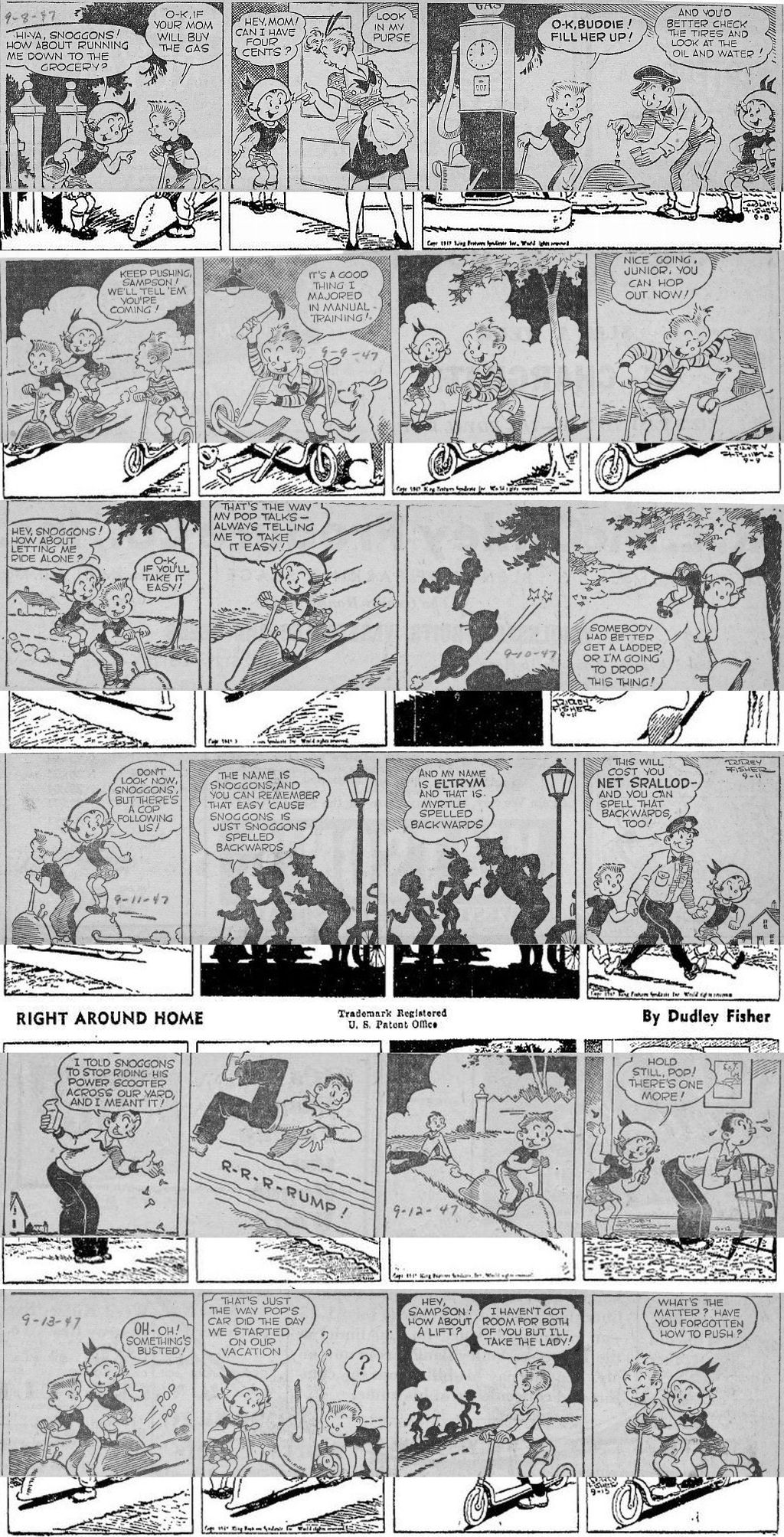 Snoggons and Sampson battle it out for Myrtle’s affection in the strips from 9-8 to 9-13-1947. I like how economical on gas Snoggons’s motorized scooter was, and how Sampson’s foot powered scooter ultimately won out when Snoggons’s engine broke down in the 9-13. We are now back to scanned newsprint clippings. Most of these are severely cropped by the newspaper they came out of, so I’ve integrated the full versions from the Newspaper Archive website. They don’t always line up exactly right, but at least you get the full Dudley Fisher images. 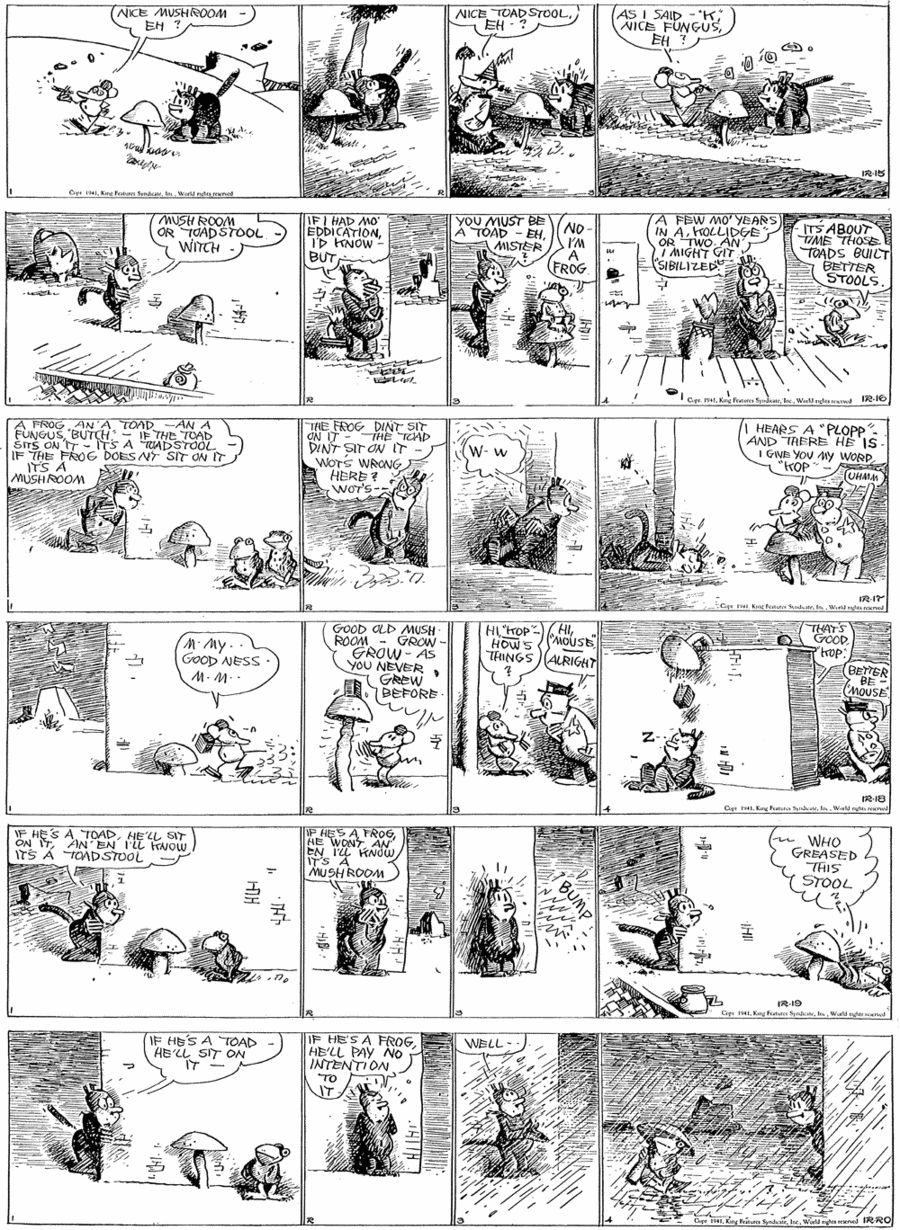 Krazy is from 12-15 to 12-20-1941. Herriman devoted the entire week to Frog and Toadstool gags. I love the way Garge drew frogs, the one in the last panel of the 12-20, carrying a toadstool as an umbrella, reminds me of Harrison Cady and Walt Kuhn, among many charming animal cartoonists. Krazy pulls a faint in the 12-17 when she sees that Ignatz is sitting on the “fungus butch” where the toad ought to be. 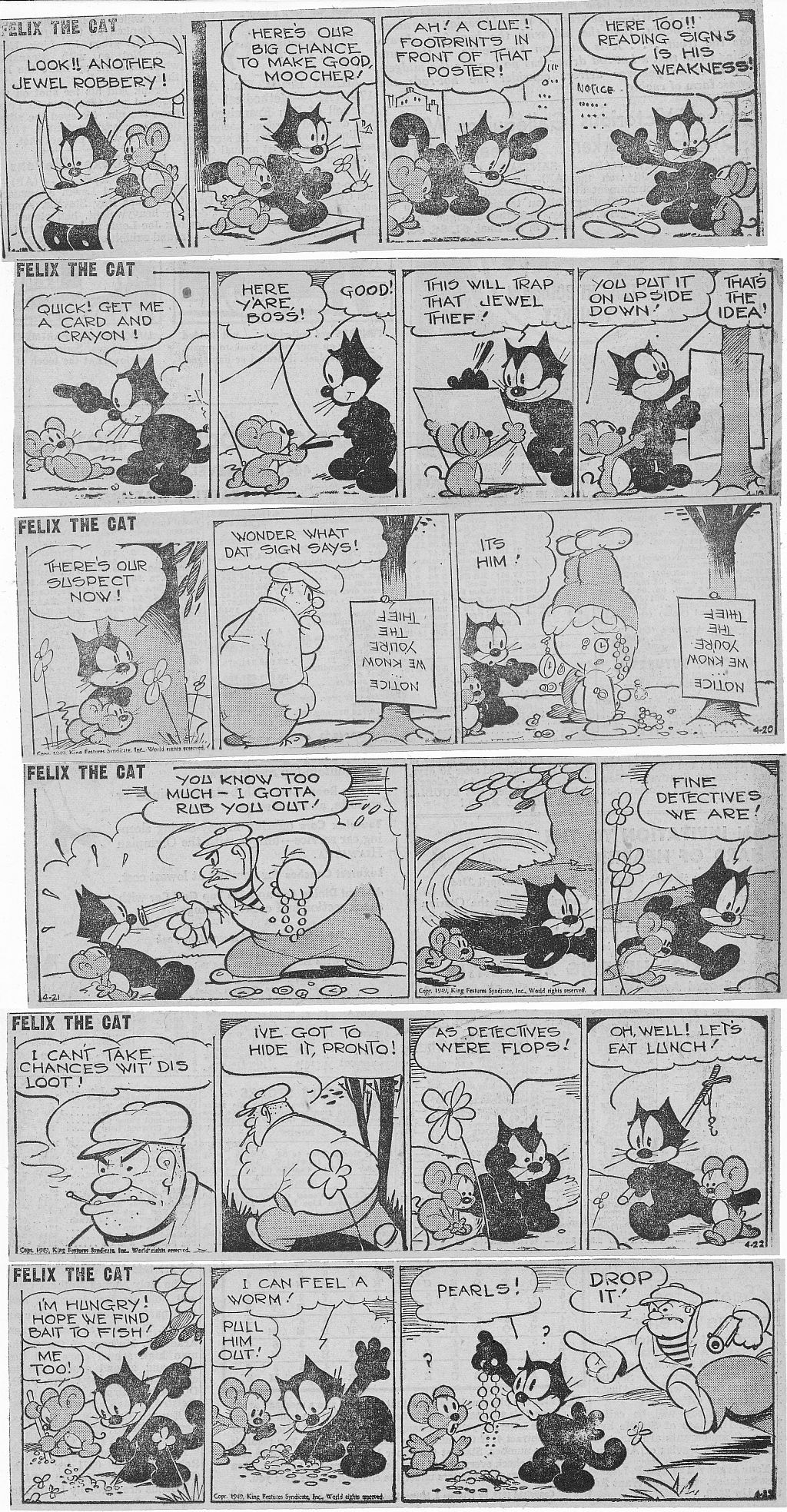 Felix is from 4-18 to 4-23-1949 and continues Felix and Moocher Mouse’s adventures as detectives. I love Felix’s reasoning powers as he letters a sign upside down, so that the nosy pearl thief will read it by standing on his hands, causing all his stolen swag to drop out of his pockets. That’s a great Messmer Felix “zip” drawing in the 4-21. We’ve still got several more weeks of these ’49 Felix strips coming up, keep us on your RSS feed!