Scout In Her New Home 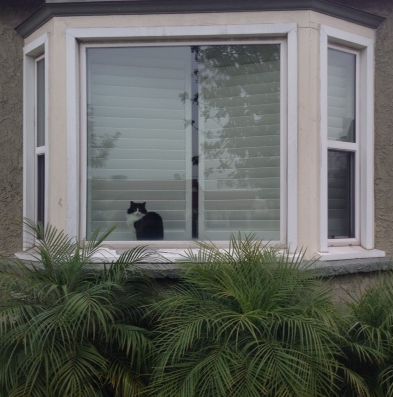 Â A reconnaissance photo of Little Scout in her new house in an undisclosed location in Los Angeles County. I’ll bet she’s looking for her leaves, but there’s naught but palm fronds in front of her. She’s obviously getting comfortable with her new place, so that’s what counts. 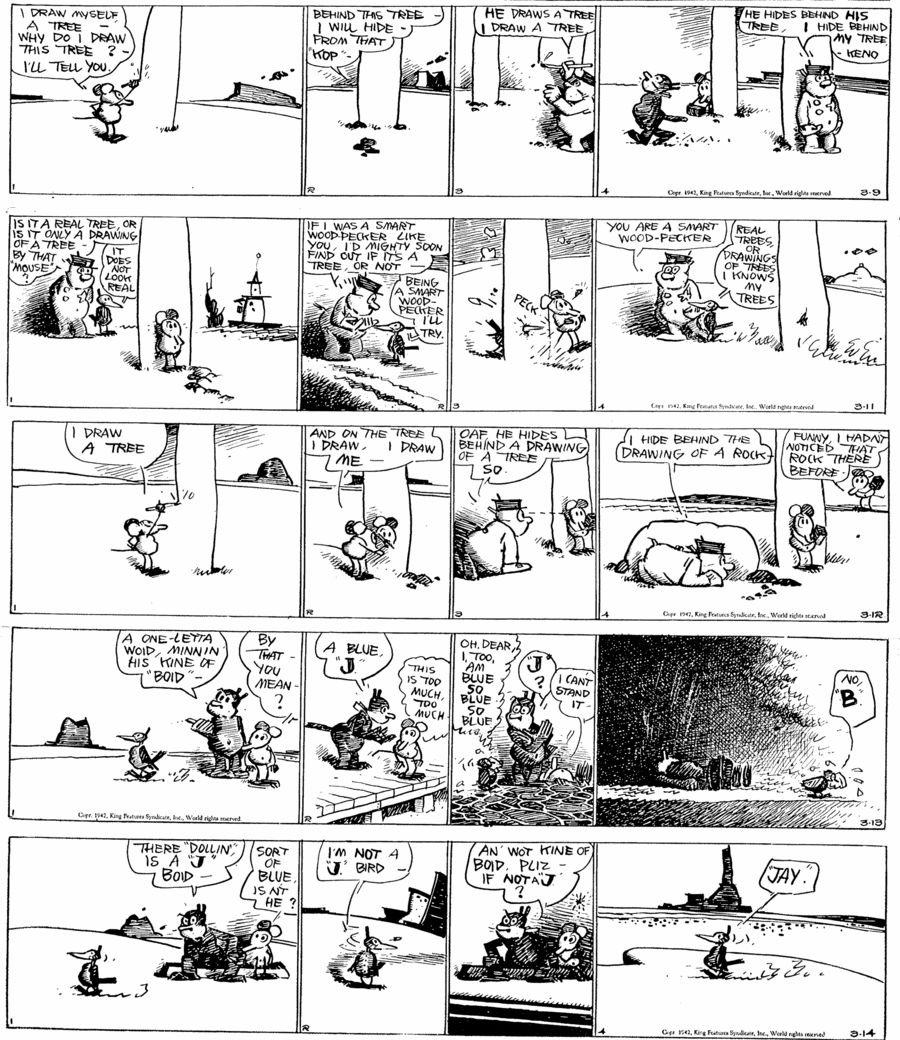 Â Krazy from 3-9 to 3-14-1942 is missing the 3-10 strip, anybody have it? The 3-9, 11 and 12 strips are looking forward to Crockett Johnson’s “Harold and the Purple Crayon”Â books, as Ignatz and Offissa Pupp draw trees and a rock on the paper in front of them and then hide behind them. Ignatz even draws himself in the 3-12 and his drawing is so lifelike it fools Offissa Pupp. The ability to simulate real trees, mice and rocks simply by drawing them on the paper you live in is rife with possibilities. I’ll bet the 3-10 strip was part of this dream-like continuity.

Â In Felix, from 2-26 to 3-4-1934, Felix helps the reformed burglar to escape the Dooit house by taking the blame for him. Felix is put out of the house in the 3-3, just look at the sympathetic pose on him in the second panel, Chaplin’s influence on Messmer is very much in evidence. The burglar does Felix a good turn by letting him back in the house, such is the redemptive power of kids remembering you in their prayers! The Sunday has Felix still visiting the home of Jupiter Pluvius and creating havoc with the weather by falling asleep on the weather control buttons! Felix, wake up!

Â Myrtle is here, from 11-30 to 12-6-1947.Â  I love the 12-2 as Myrtle’s Mom bounces on the bed in defiance of her own orders to Myrtle; now we know why Myrtle is such an irrepressible tomboy, she inherited the tendency from Mom! Dudley Fisher has fun with distorting his drawings of Myrtle and Sampson as they try on Freddie’s glasses in the 12-4, “no wonder he doesn’t wear them”.

Â The Yogi Bear Sunday pages by Harvey Eisenberg continue, this time from February, 1964. I love the gag in the 2-16, as the Ranger and Yogi’s snow boot buckles hook together. In this same strip we learn that Ranger Smith’s first name is Frank! There could be an insider gag here, as Frank Smith the animator was a very popular guy in the 1960s L.A. animation scene. I wonder if they still make rubber snow boots with the metal clasps anymore, I still have a pair. The guinea pigs in the 2-23 are typical Eisenberg cute little animals, sweat drops and all. In the 2-2 we get to meet the Ranger’s wife and little son, I don’t remember any TV cartoons that featured the Ranger’s home life. Remember to check Yowp’s blog at http://yowpyowp.blogspot.com/Â for the half-page versions of these Yogi Sundays in black and white with his informed and informative commentary. Comically yours, Mark. 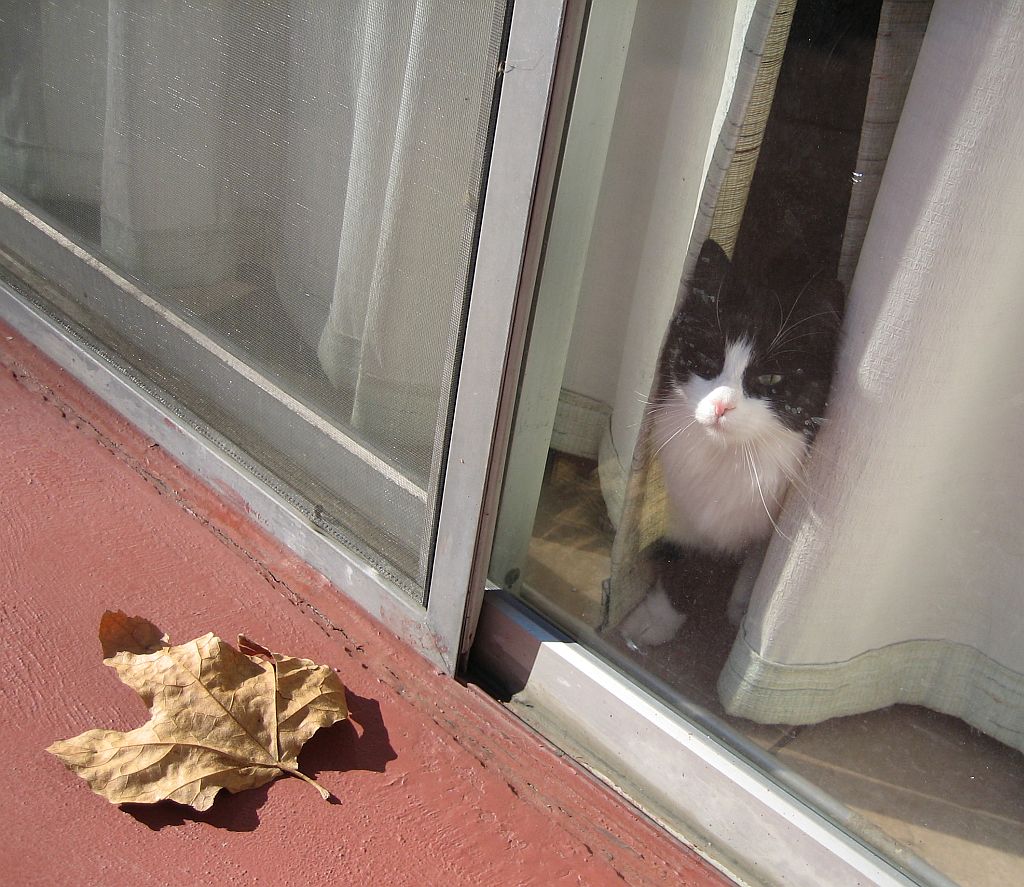 Â Scout seems to have gone over pretty well with you readers, so here she is once more.Â  Scout looks out of the sliding glass doors as she waits for me to play leaf hockey with her. I love the friendly half closed eyes, she’s relaxed and comfortable with the routine. That’s a typical sycamore leaf in the foreground, Scout loves big leaves! 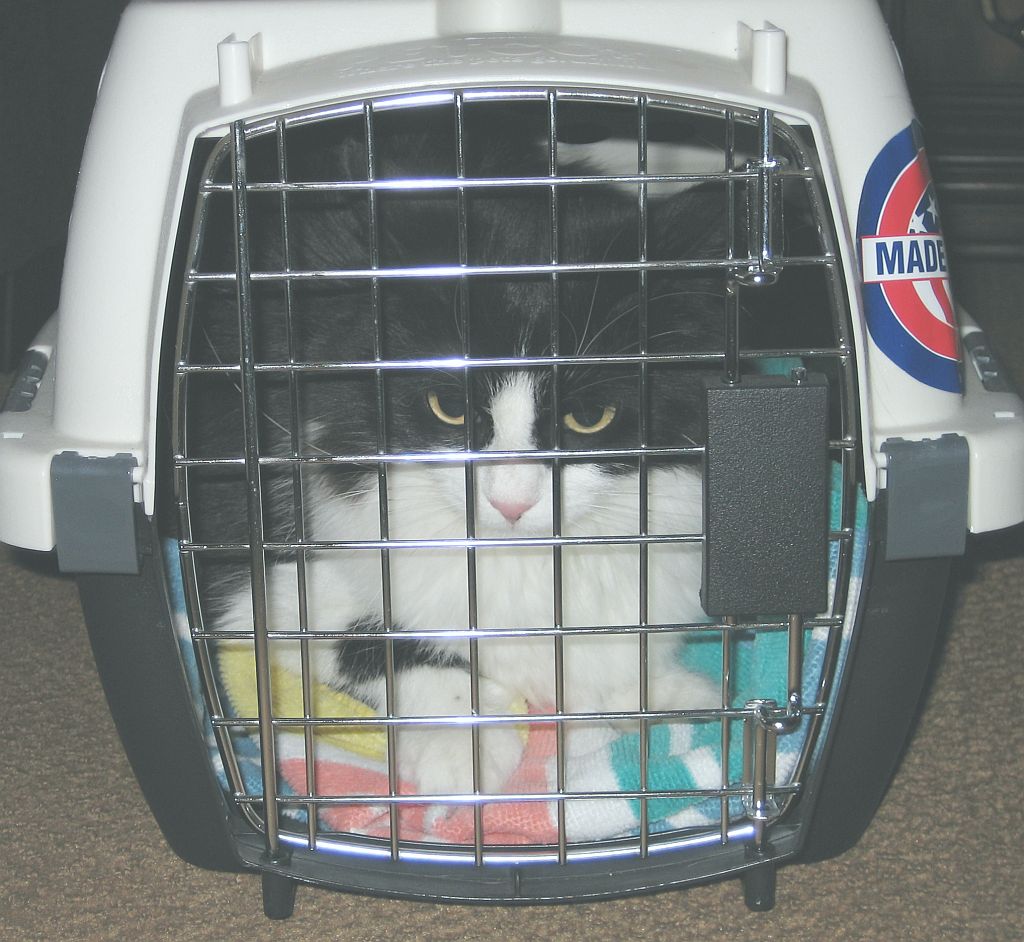 Â Here in marked contrast to the pose above, is Scout about to move to her new house! She doesn’t look too happy here. I held her against her will as her caregiver prepared the dreaded CAT CARRIER for transport. Poor little Scout struggled and kicked me with her back feet, but didn’t scratch or bite as she tried to escape. Cats don’t like travel, even in the most comfortable of cat carriers. I really miss my friend, but, the happy thing is, she’s alive, and will have a wonderful happy home with folks who love her. Don’t you wish all cats could have such a bright future ahead of them? 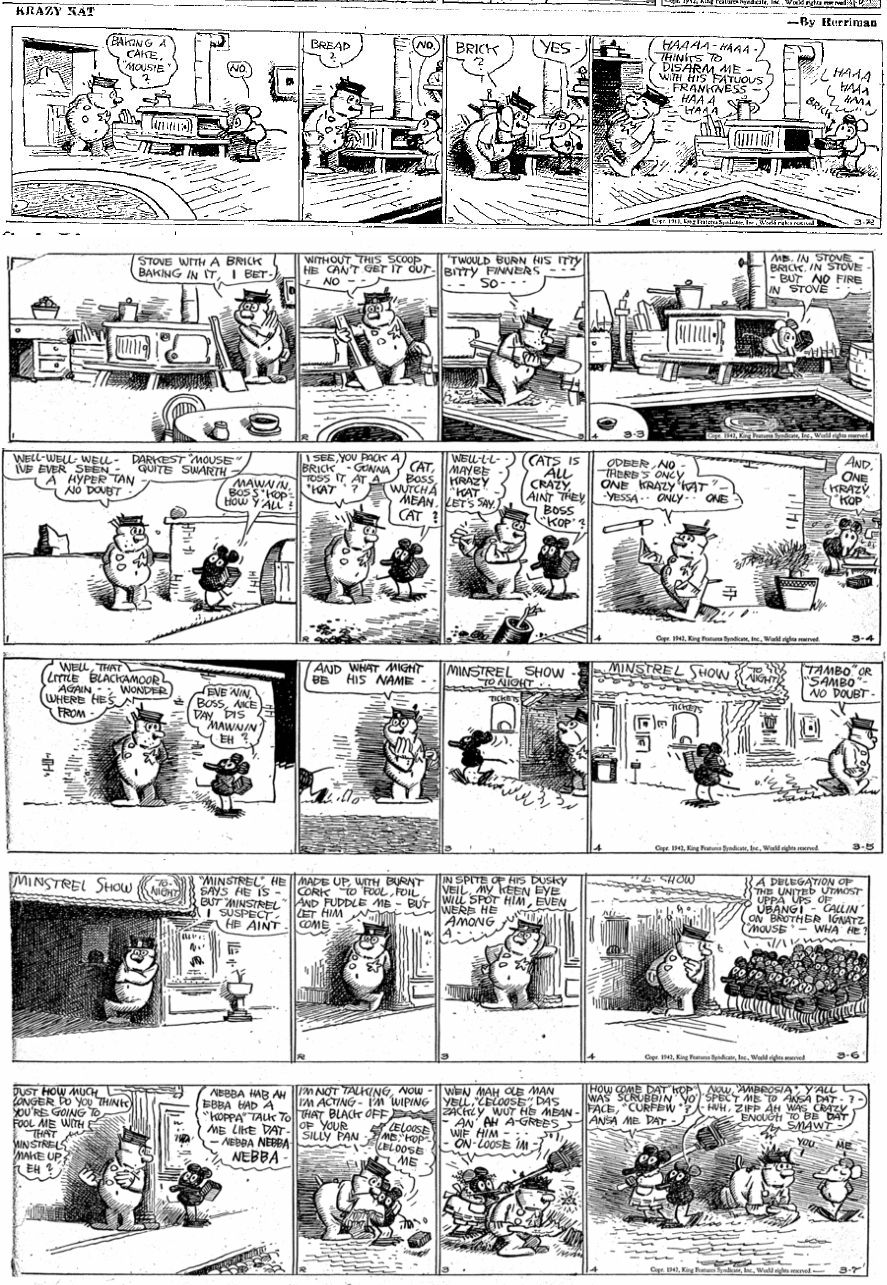 Â Here’s a whole week’s worth of Krazy strips that have minstrelsy in them. In other words, Ignatz in black face. These are from 3-2 to 3-7-1942. The black mice start in the 3-4 daily, and the dialect that Ignatz speaks isÂ spot-on, or should I say soot-on. Offissa Pupp finally has had enough in the 3-7 and tries to wash Ignatz’s face, only to discover an authentic black mouse named “Curfew”. His wife Ambrosia, lets Pupp have it with a broom and he “leloose”‘s Curfew. Note that the dialect becomes a lot more Joel Chandler Harris in the 3-7, when Ignatz speaks with a Southern black accent in the earlier strips, the wording is a little simpler. Herriman was of mixed heritage himself, but doesn’t shrink from the occasional black stereotype in his comics, that was the humor of Krazy Kat’s time.

Â In Felix from 2-19 to 2-25-1934, Danny’s home is invaded by a burglar pretending to be Santa Claus. In “Bedtime Worries”, an Our Gang comedy of the early 1930’s, a burglar tried to use the same ruse to fool Spanky. Danny and his brother are easily fooled by the burglar’s friendly demeanor, but Felix remains skeptical. In the Sunday, Felix still controls the weather from the planet Jupiter, freezing a tramp who is after Danny. I love the large expressive hands and fingers that Messmer puts on his human characters, the burglar in the 2/22 is especially interesting. Messmer draws many of his characters bodies as big barrel shapes, and the heads as simple ovals or bean shapes. He was an early practitioner of creating cartoon characters based on round, friendly forms.

Â Here’s Myrtle from 11-23 to 11-29-1947. In the 11-24, note how Dudley Fisher has a squirrel bopping Myrtle with a walnut. If this didn’t influence the nut boppin’ squirrels in “Mutts”, it should have. The 11-27 strip was scanned from my tear-sheet, because the strip was missing from Newspaper Archive. It’s a clearer looking image, but lacks the lower third of the drawing.Â I hope you enjoy all the comics!Â