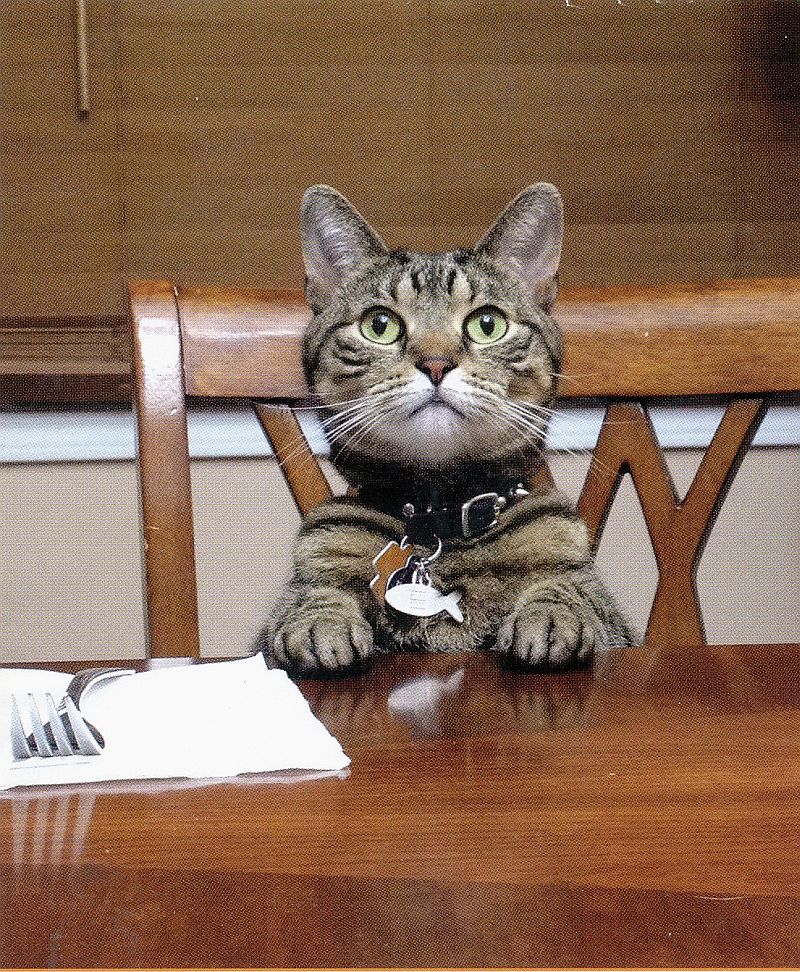 Â Cathy thought that this was a very funny cat photograph.Â  His name is Tucker, and we love his look of anticipation and the subtle touch of the fork and napkin on the left side. The little fish name tag seems to suggest what this kitty wants for dinner!

Â Felix is from 1-22 to 1-28-1933 this time. The Sunday page features Felix making a Northwest hero out of himself as he dons a borrowed pair of shoes, then accidentally lures a lot of game animals to the hunter’s cabin. In the dailies, Felix is still trying to quell the romance between Danny Dooit and little Doris. I like the cheap Scotty dog joke in the 1-27.

Â Myrtle is from 10-25 to 10-31-1948. I like the 10-25 as Myrtle squirts Sampson with her father’s fountain pen and quips that she’s “writing off a few debts”! Dudley Fisher’s poses are beautiful in the 10-30 as Susie hugs Freddie for bringing her flowers, she’s leaning so far over that she’s nearly off-balance. The Sunday page is a Halloween special, the little ghost that appears to Slug in theÂ right hand panel, and Hyacinth the cat looking into the apple tub are nice touches.

Â Krazy is from 2-1 to 2-6-1943 this time, War time. Ignatz combats the blackouts by painting Offissa Pupp’s buttons and star with phosphorous paint, Ignatz faints dead away over “synthetic” coffee (probably Postum) and Joe Stork delivers a “bindle” to Offissa Pupp by mistake due to the blackouts. Mrs. Kwakk-Wakk thinks that Pupp is kidnapping an infant! In Coconino County, the World War Two restrictions, rationing and blackouts are the stuff of Komedy. 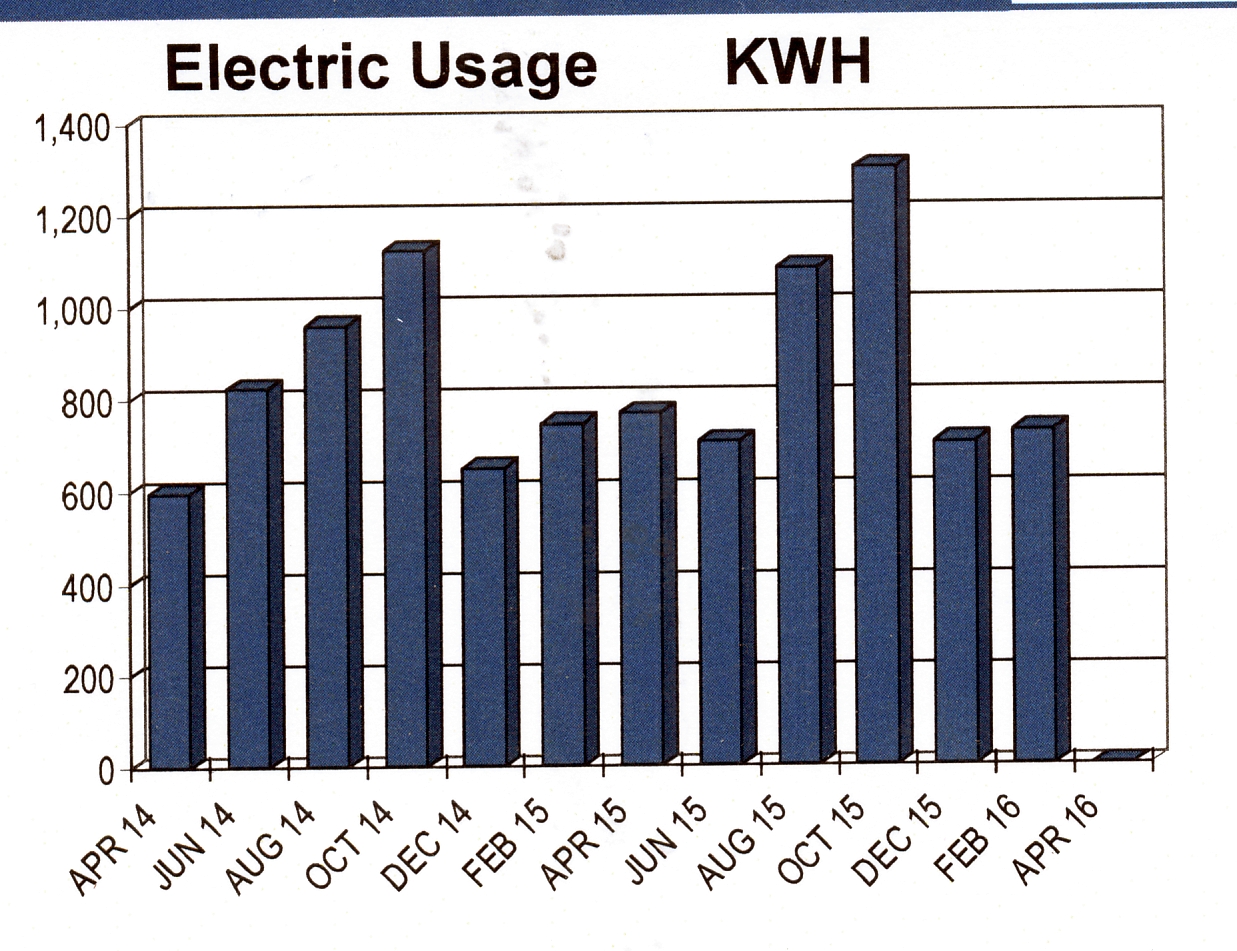 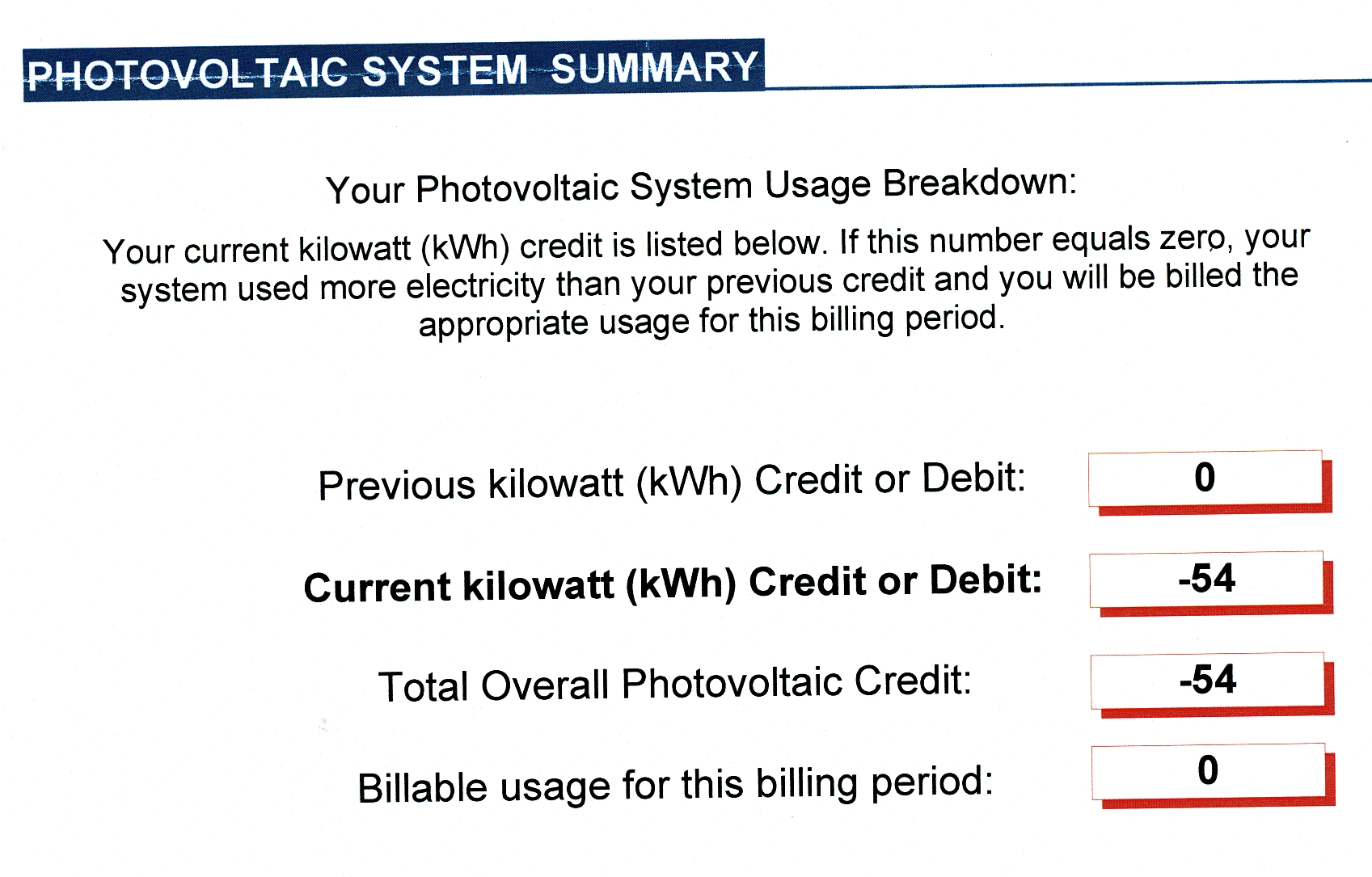 Gentle readers, Mr. Sun has really delivered the power! If you examine the statement above on the bottom, we generated 54 Kilowatt Hours more than we used. That power is now “banked” in the Glendale Power Grid for us to draw upon when we need it. The chart on the top took me awhile to figure out, but the “APR 16” Bar really says it all, we actually posted negative use for electricity in the current billing cycle! The Bar shrunk to a little blue rectangle at the bottom of the chart. Of course, you know that Kilowatt Hours are a measure of the power our Solar panels generate, and Watts or Watt Hours are a measure of the energy actually USED. Just think, ONE Kilowatt Hour is enough energy to power a TV set for 10 clock hours, a radio for 20 hours and a computer for 5 to 10 hours depending on how much the computer is doing. What I don’t understand is: Why aren’t MORE people doing this? WHY are people content to permit the big oil and coal companies to frack, drill, strip-mine and remove mountain tops when they can generate their own Kilowatt Hours and run a surplus? Why do the idiots still shout “Drill, Baby, Drill!”, when they could power an electric car from solar energy? More of us should have converted to Photovoltaic Panels 20 years ago, then maybe Global Warming wouldn’t be the problem that it is for us today. Readers, if you can look at the charts above, and NOT even CONSIDER what Solar Power can do for you, and for the EARTH, then your subscriptions to the Catblog are hereby terminated.

Â Felix is from 1-15 to 1-21-1933 this time out. In the Sunday, Felix and Frisky are left out in the cold; the farmer takes Frisky’s dog house away for firewood. Felix blows a giant bubble with his pipe and the two animal pals useÂ the frozen bubbleÂ for a transparent dog house. In the dailies, Felix still tries to discourage the romance between Danny Dooit and little Doris. I like the “one second elapses” continuity between the 1-20 and 1-21 strips. Felix is shocked into falling off the roof, then Danny thinks that Felix fell off doing pantomime comedy and wants an encore to make Doris laugh. Felix was expecting a Doctor.

Â Myrtle is from 10-18 to 10-24-1948. The 10-18 daily has some of Dudley Fisher’s patented gag timing, as Freddie forgives Myrtle for playing with his car and driving all over the lawn, because she confessed to the crime. In the last panel, Myrtle also tries to get forgiven for smashing the garage door with Freddie’s car by sneaking in a little extra confession. In the 10-21, Myrtle is all set to wreck the indoor playroom that Freddie just built for her by spreading mud all over it. I like the George McManus steal as the portrait of the rabbit on the wall comes to life and looks at the damage Myrtle is doing in the fourth panel. Hyacinth the cat appears in the Sunday page, risking her nine lives playing football with the family.

Â Krazy is from 1-25 to 1-30-1943. Garge continues his War gags and does a whole week of “Blackout” jokes. A blackout during the war was accomplished when a community turned out all it’s lights at night to prevent being spotted by enemy aircraft. In the 1-27, Psalm 23:13 is quoted as Offissa Pupp threatens to crush a blackout curtain like a “big bad Bull of Bashan”. Bashan refers to rich pasture land in Israel, east of the river Jordan where cattle thrived and grew especially strong and big. The 1-30 is a rare “inside” glimpse of Herriman’s drawing board as Ignatz pours a bottle of ink over the third panel.

I apologize for the long absense. I deserve to lose all my readers for this, I still enjoy blogging, but it’s a lot of effort for a little screed that you get for free. I used to print a hectograph newspaper when I was a kid and tried to get 3 cents a copy for it. Most of the time I was lucky to sell them for a penny. I used to print about 25 copies an issue. This here blog could be read by millions of people all over the world, but generates not one penny in income. Don’t get me started on the Domain Name fees!