Little Grey says We’re Up and Running! Go to www.itsthecat.com ! 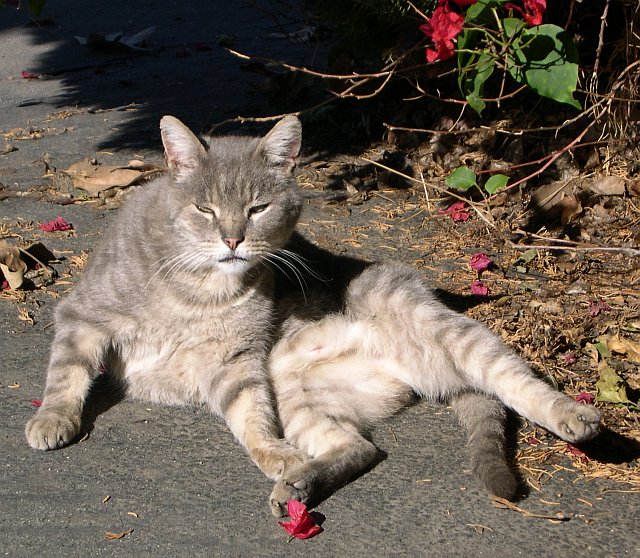 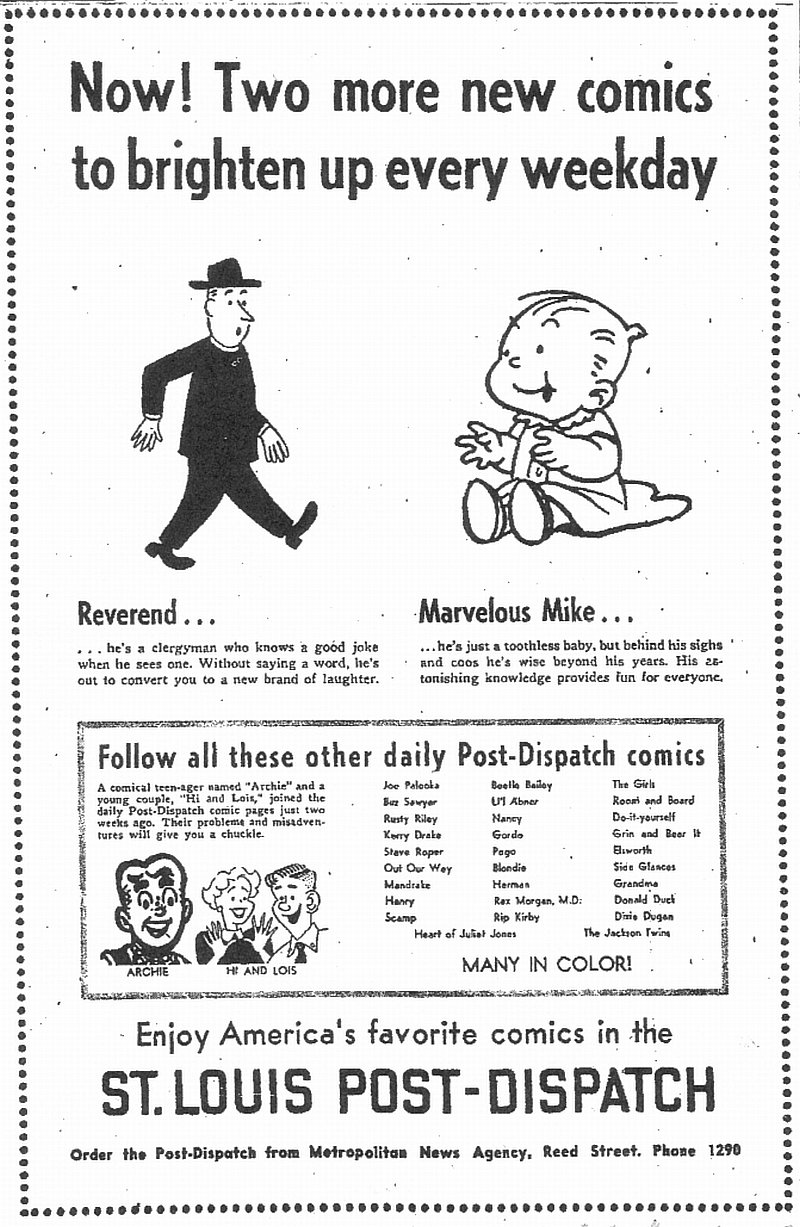 Hi readers! Thanks again for all your kind words about Little Grey, who is still very much in our thoughts around here. Here he is in mid-groom, looking very contented with squinty eyes.

Thanks to the expertise of our webmaster Adrian Urquidez and Top Producer Greg Ford, “itsthecat.com” is now fully updated and operational! Just go to www.itsthecat.com and click the “mouse” next to the word “gallery”. Â There you will see an updated page of cel set-ups for sale in three different price ranges, with Sc. Three (the most requested), well represented. The shipping is included with every cel and a free DVD of the cartoon: “It’s ‘The Cat'” will be included along with the cel. If you go to “movies” (“Movies, we NEVER go to movies!”) on the gallery page, you will find a Quick Time embedded movie of the original pencil test from “It’s ‘The Cat” to entertain you as you select the cels you would like to purchase. This is probably the last place on the Internet where you can buy actual PRODUCTION cels from a cartoon, and not reproduction or so called “sericels”. Most of these cels are HAND-INKED as well as HAND-PAINTED, production methods and skills which are increasingly rare or little used. With each cel comes a reproduction of the BACKGROUND, and in most cases the original DRAWING from which the cel was inked. Help us continueÂ to make short cartoon films, the first six scenes of our new short, “There Must Be Some Other CAT!” are almost ready for the production camera. Your purchase is appreciated by lovers of cartoons and cats everywhere. Thank You!

This week I’m re-printing an ad promoting the St. Louis Post-Dispatch comics which appeared in the Moberly (Mo.) Monitor-Index on March 7th, 1956. This is a rare instance of a newspaper actually printing an ad promoting a rival paper’s comic section. Both “Marvelous Mike” and “Reverend” were winners in a contest that United Feature Syndicate held to find new comic strips. I believe “Reverend” ran a little longer than “Mike” but neither strip proved to have “legs”. Our “Marvelous Mike” strips this weekÂ  are from 2/25 to 3/2/1957. Cliff Crump (who increasingly reminds me of Joe McDokes in the Warner Bros. shorts), is appointed judge by retiring Judge Hartshorn because Cliff is a “good citizen”. We’ll see if he can resist a bribe. Krazy Kat this week is from 7/17 to 7/22/1939, the subject being “music”. There are a lot of puns on the words “suites” and “fugues”. The 7/21 strip has me baffled, can one of you comic experts tell me what “fugues” are in “Ken-tuggy” and “Tennis Sea”? I’ve heard of the “Tennis Sea Walts” to paraphrase Krazy, but not a fugue. I like the fact that in the 7/19 strip the pose of Ignatz hurling the brick is now so familiar that GargeÂ can just draw Ignatz with his arm following through without even showing the offending missile! 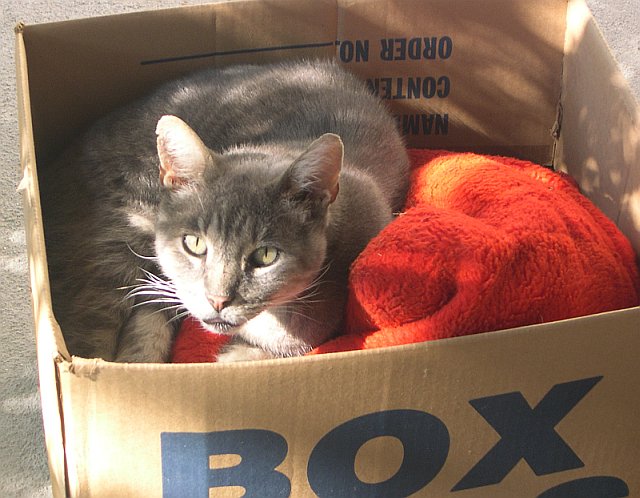 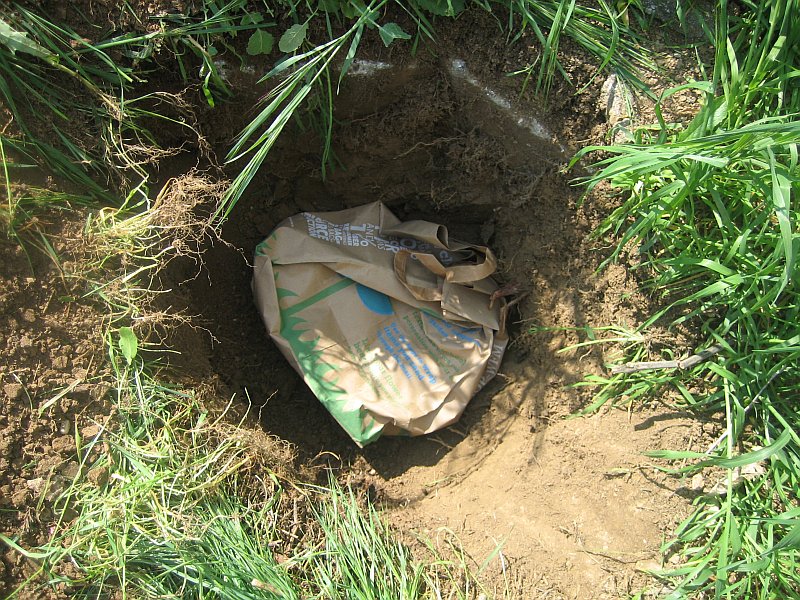 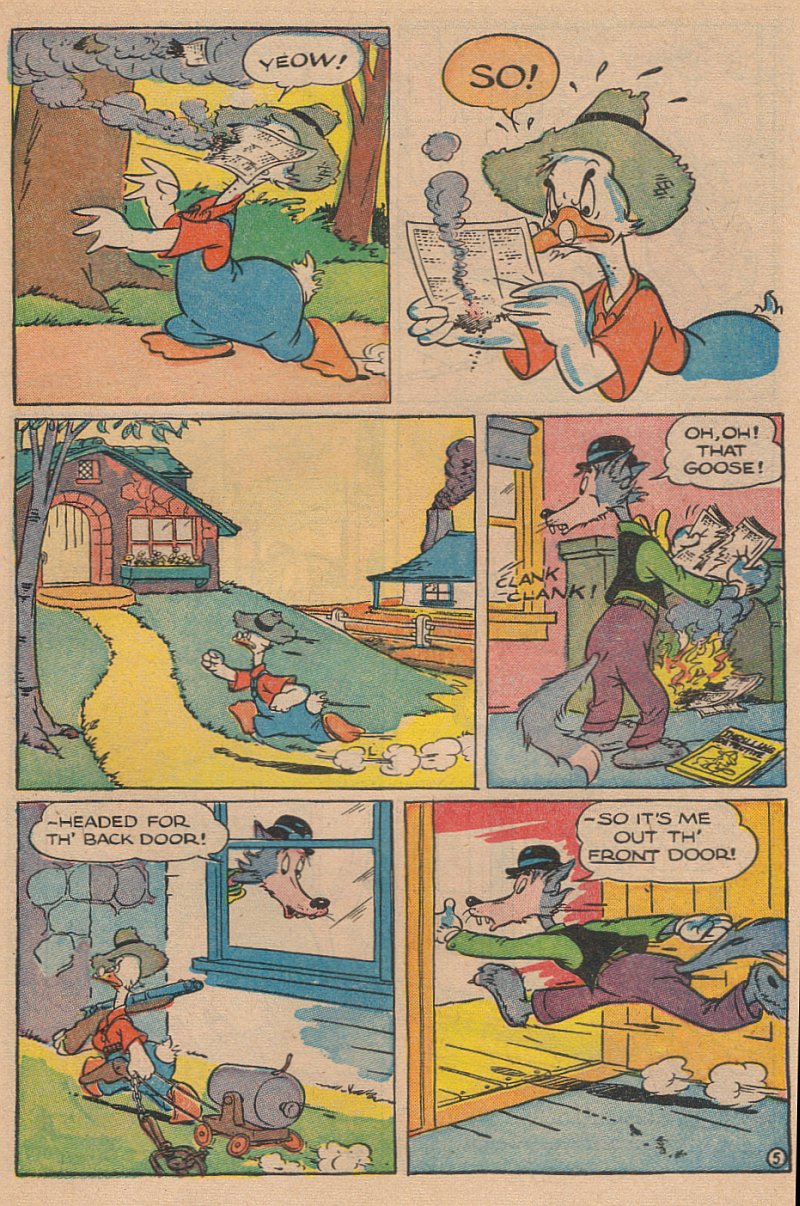 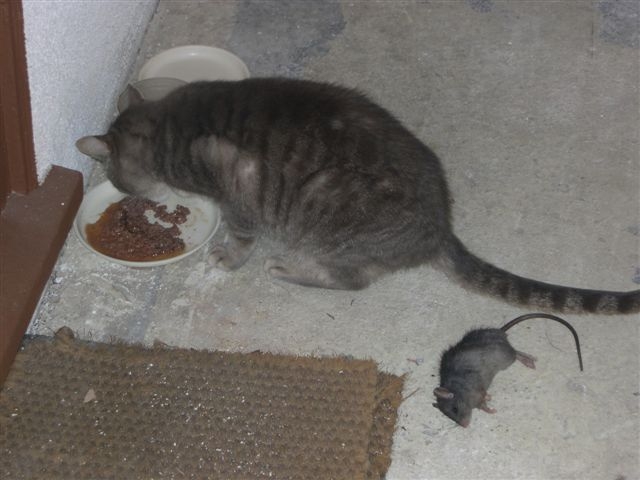 Dear readers, if you don’t want to read sentiment, please skip to the comics section. Otherwise: “He taught Laughing and Grief, they used to say.” Lewis Carroll from “Alice’s Adventures in Wonderland”.

Little Grey has come home. I found his little body out in the back yard, while I was preparing to cut grass a few days ago. He was evidently killed by a coyote. I dug a grave for him underneath the lemon tree, not far from the grave of Little Sister, another dear cat who was the victim of a coyote some years ago. That’s a photo of his final resting place above, next to one of my favorite pictures of Grey on our front porch,Â in his box with the red pillow. I also have included a picture which I have posted before, of Little Grey eating a well-earned meal, with his “catch” going unmolested. Grey was a good mouser and bird-catcher in his early years. For awhile, it looked like he was especially good at catching pigeons. Grey seemed to be coming up with a fresh kill nearly every day, until I realized that he was simply eating the pigeons that a neighbor hadÂ shot with his air rifle! As I posted last time, Little Grey was shy with a lot of people, but was never shy with me. He followed me everywhere, and jumped into my lap nearly every place I sat down, including the bathroom! Of course Grey liked to sit on my lap down here in the computer room, purring as I typed. He made me laugh every morning as he climbed the stairs, wide eyed and eager, with his paws taking the steps two at a time, then dashing into the kitchen and greedily chowing down without even looking up. This winter was quite hard on him, he was meowing at the kitchen and front doors quite a lot, sometimes very urgently. As I said last time, he was not box-trained, so we had to let him in selectively and supervise him. For the most part, Little Grey was used to an outdoor life, but lately he was slowing down a little and eating less. We always thought he could take care of himself in co-existing with the skunks, possums, raccoons and coyotes that live around here, and he did that quite well for a long time. Whenever a skunk would show up to eat his leftovers, Little Grey was smart enough to just sit back and relax until the black and white robber had eaten it’s fill. Sadly, he finally slowed down enough that a coyote caught him. I can still hear him meowing everywhere, his spirit is very strong. It’s especially sad in the morning without the little one sunning himself on the back steps waiting for breakfast. Cathy and I miss him very much.

Thanks Diana Rodriguez of the Hampa studio, Dave Nethery and Charlie Judkins for writing sympathetic letters about Little Grey. Your words mean so much at this time, I am very moved that you took the time to care! Grief is such a strange emotion, it just comes over me in waves. Little Grey was such a big part of my life that almost everything around here reminds me of him. No other family adopted him, he stayed near us for all of his life. I’m so glad he was with us for as long as he could be, and at least I know where he is.

“…who had died as he had lived, in absolute love and infinite devotion.” Charles Tazewell from “The Littlest Angel”.

Comics this week are “Pop Korn”, the conclusion from Coo-Coo Comics, #28, August 1946. The wolf is foiled by a loose board on the front porch as Pop happily finishes his detective story. Pop walking along with the rifle over his shoulder, towing a miniature cannon and animal traps strongly resembles Taliaferro’s Donald Duck poses. Pop even says “So..!” when hit by a scrap of paper, just as Donald would do. Even though the story is slight, I love the small town, Centerville atmosphere that Taliaferro conjures up so lovingly with his beautiful drawings.

Marvelous Mike from 2/18 to 2/23/1957 this week concludes the Mr. Kosno story, as the Crumps return home from their Florida vacation. I think that kids could really agree with Mr. Kosno’s line in the 2/20 strip as he reacts to Cliff’s corporal punishment of Merrie: “..how many times we adults mete out undeserved punishment to our children.” Of course to kids, almost ANY punishment feltÂ undeserved, especially spankings! Corporal punishment really seems to have vanished from modern parenting, about the worst a child gets now is a “time-out”. My brother and I were usually careful to tow the mark and avoid the belt when we were kids. We’ll find out what the policeman wanted to see Cliff about next time. Krazy Kat is from 7/10 to 7/15/1939 and the story could be called “Sixty/Forty”. Offisa Pupp, Mrs. Kwak-Wak, Krazy and Ignatz spend the week discussing physics, Pupp running 40 miles an hour, Ignatz hurling a brick at sixty. The boomerang brick in 7/12 is novel, but I like the 7/15 strip the best, as the brick reacts to a “stop” sign. 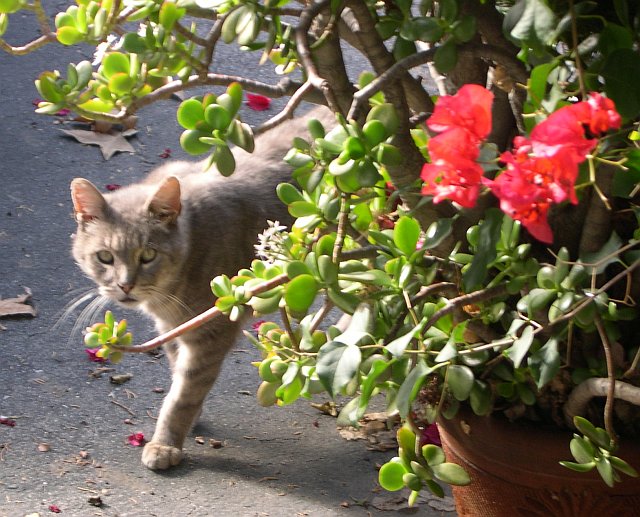 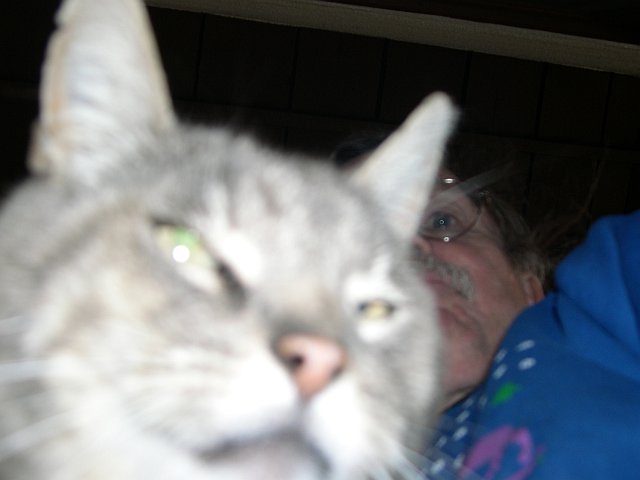 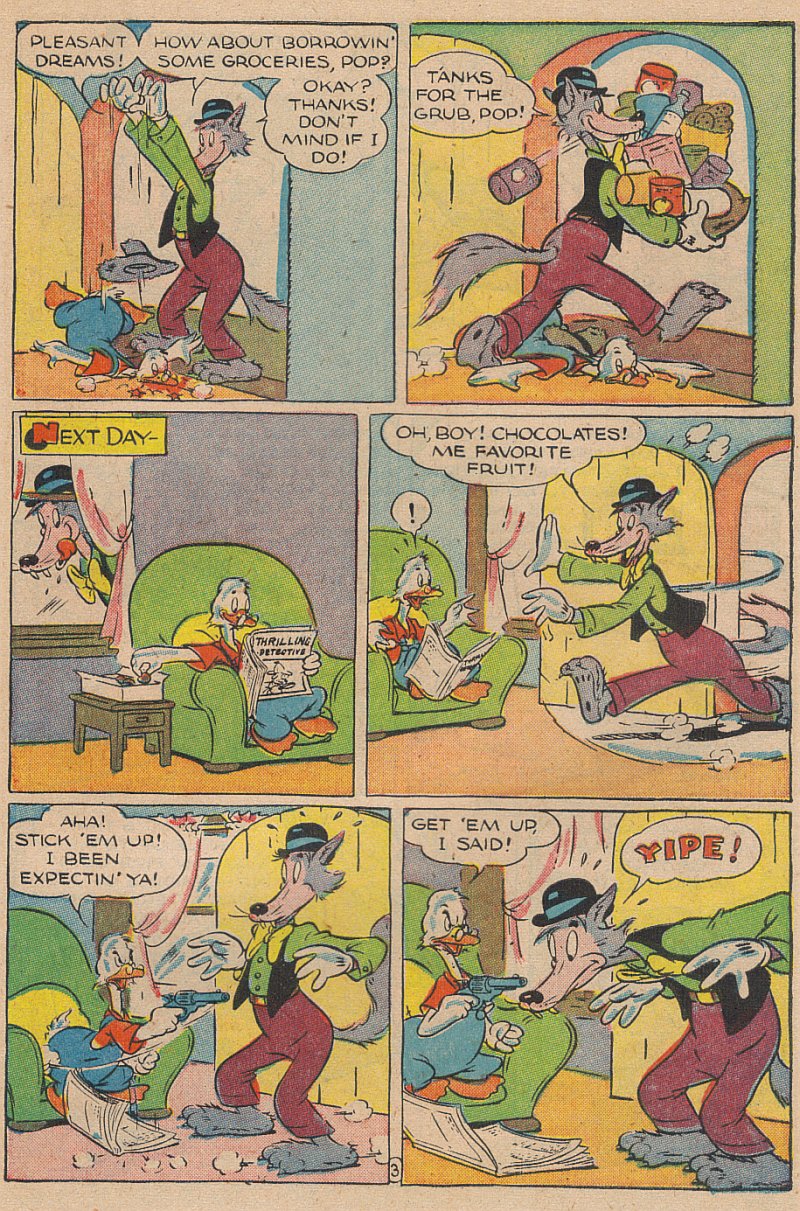 Well, dear readers, I’m going to take a little break from the ballyhoo for “It’s ‘The Cat'” over on My Toons. There is concern in our house tonight for our dear friend, Little Grey, the outdoor cat. You see he’s been missing now, for three days. Little Grey’s been with us since 2004, he came in to our lives (my wife Cathy’s and mine) hissing, spitting and suspicious. He was very young, little more than a kitten, and evidently had been mistreated. Gradually, the power of food won him over, and before many months went by, he let us touch him, and he let it be known that he was a “lap cat”. Grey liked nothing better than climbing up on my lap, to doze and purr. I think he would have stayed in my lap for 4 hours in a row if I wouldÂ let him. Little Grey must have been part Siamese, because he loved to “talk”. He would yowl for his breakfast and supper, and whenever we would stand around talking to our neighbor, Little Grey would sit close by our feet and try to join the “conversation”. Although there will never be a cat dearer to us than our cats Crispy and Little Sister, who are both gone now, Little Grey will never be forgotten. Crispy, who was with us nineteen years, was quite intolerant of other cats, and really hated Little Grey. As old as she was, one day she went on the attack and tried to scratch Grey. Little Grey could fight fiercely when he needed to, we saw him do it, but that day, he just rolled over and showed his belly to Crispy and that stopped the fight! Little Grey seemed to sense the social order around here and treated the senior cat with respect. That fuzzy close-up of him in my lap was a self-taken snap shot, that’s why he’s out of focus, but I think it’s a funny picture anyway.Â Little Grey has been in declining health lately, getting pretty thin and not eating very much. He is really a semi-wild creature, an outdoor cat, not box-trained, but really a nice, friendly kitty. I hope he got adopted by a caring family and will get some good medical care. We miss him.

Â Â Â Â Â  Comics this week are pages 3 and 4 of “Pop Korn” by Al Taliaferro from Coo-Coo Comics #28, August, 1946. The wolf grabs Pop’s food and candy, then takesÂ the old goose’sÂ Detective magazine. It looks like the wolf also bought up all the Detective mags at the local newsstand and is burning them in his stove so that Pop can’t finish his detective story! We’ll finish off thisÂ comic in the next post. Marvelous Mike this week, from 2/11/1957 to 2/16, continues the Mr. Kosno story. The dialog in the last panel of theÂ 2/13 strip is a little hard to read, due to the darkness of the microfilm copy. Mike says: (to Merrie): “Go back to the hotel man and wait for me, dear sister—if my plan works, I’ll see you within the hour–” Mike stows away in the spy’s car, causing them to fear a federal rap, kidnapping.Â  Thinking that they have the secret papers, they run out, leaving Mike with Mr. Kosno, but of course Mike has the real ones; more next time. Krazy Kat, from 7/3/1939 to 7/8, is primarily about a Coconut tree and the Coconino citizens who are bopped by coconuts dropping from the tree. Of course it’s mostly Ignatz doing the dropping and bopping. Remember, to see any picture larger, just click on the images with your mouse. I’ll be posting some more of my favorite pictures of Little Grey in the next few entries, after all, this is the Cat Blog. See you then.