Â I found this old greeting card in a stack of memorabilia that my Mother saved. It’s drawn for Hallmark Cards by Louie Schmitt, character designer and layout man for Tex Avery in 1945, animating shorts like “Bad Luck Blackie” and doing layout and design on “Lucky Ducky”, “The Cat That Hated People” and “Half-Pint Pygmy”. Â I’ve included one of his model sheets for “L’il ‘Tinker”, above. That’s the cartoon with the outrageous parodies of Vera Vague and Frank Sinatra. Louie Schmitt animated on Snow White and Bambi, and worked on Walt Disney shorts starting in 1932 with “The Klondike Kid”. He also animated onÂ “Toll Bridge Troubles” for Screen Gems with the Fox and Crow. Â I love how the Papa Rabbit is about to beat up the new-born rabbit with a baseball bat! Look at the sheepish grin he flashes at his wife as he tries to keep the bat hidden behind his back. The attitudes on this card are the essence of 1940s cartooning. You’re probably wondering why my Mom saved this little card. She wasÂ a Louie Schmitt fan! Honk! Naw! Hoaxed ya again, it was a card sent to my Mom congratulating her on my arrival! Who knew who Mr. Schmitt was in 1948, or Tex Avery for that matter? He didn’t get to even sign his name to the card, Hallmark liked to keep their artists anonymous.

Â Here’s Felix from 2-26 to 3-4-1933. In the Sunday, Felix is looking to bump himself off after his Gal rejects him. He accidentally socks a fish with his sinker rock and decides to eat instead. In the dailies, Felix and Danny are flying on their magic carpet to deliver a telegram to Colonel Snooper in the Arctic circle. Messmer loved to put Felix in snowy and desert locales, since his black fur made him stand out against very light backdrops. Felix drives an icicle into a polar bear in the 3-4, thinking it’s a snow bank. 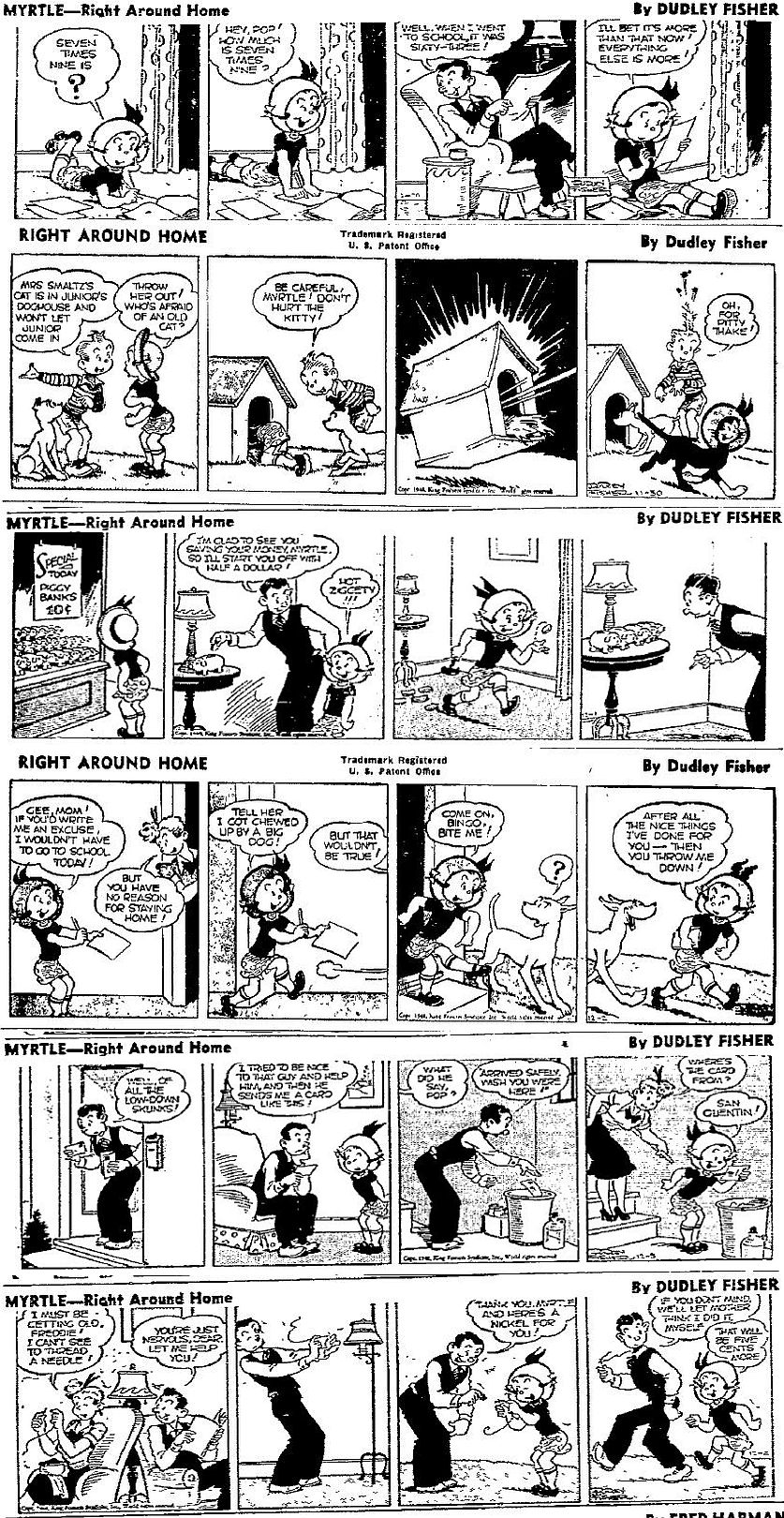 Â Here’s Myrtle from 11-29 to 12-4-1948. There’s a good cat gag in the 11-30, but it’s not Hyacinth. I also like the Dudley Fisher timing on the 12-4, as Freddie unsuccessfully tries to thread a needle for Susie and gets Myrtle to help him. He wants to get sole credit for the needle duty, but Myrtle wants a nickle tip from Freddie to keep it a secret that she helped him.

Â Krazy is from 3-8 to 3-13-1943. Garge is back to the War gags. The first three strips feature Ignatz’s mechanized brick-tosser. The tosser also can morph into a drone and drop bricks from the air. Â Offissa Pupp would have to be a Katfish to keep up with the submarine part of the masonry Monitor. In the last batch of strips, Krazy is working as an aircraft “Spotta”. He spots a Koach Dog, then decorates himself with spots and then mistakes Ignatz’s indigestion for “Patri Yock-tic” behavior.

CU in downtown L.A. for the next few days. Cathy and I will be doing some plein air painting.