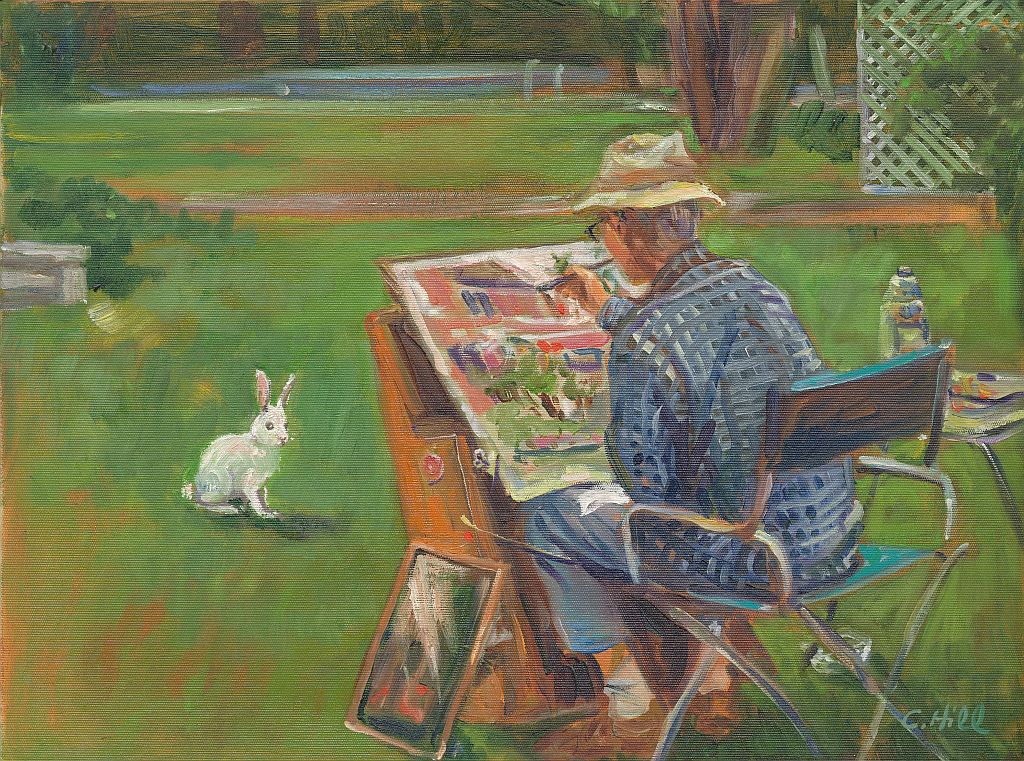 “John The Magician” by Catherine Hill 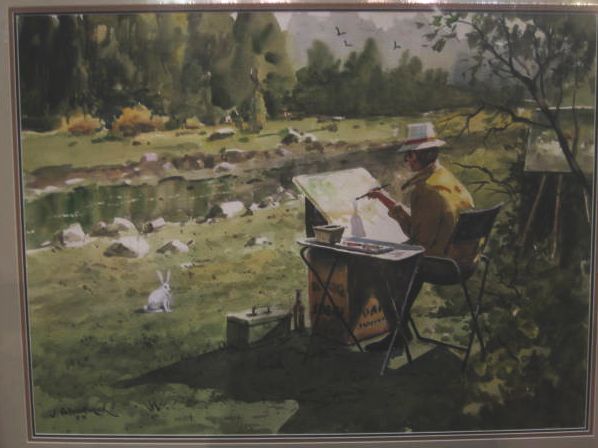 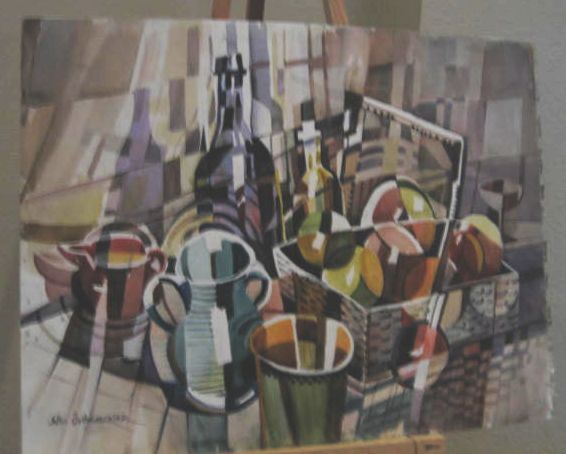 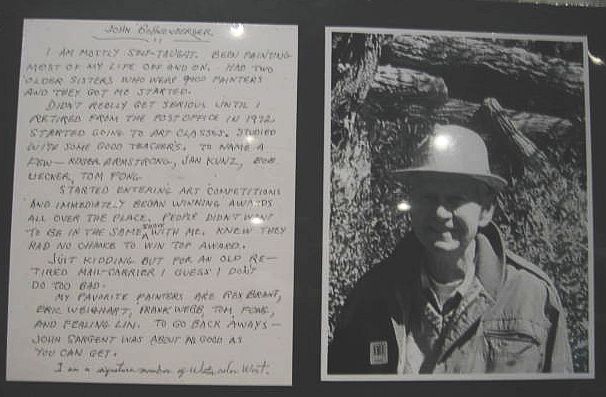 A Rare Written Statement about John by John.

What can you say about such a dear friend and great watercolorist as John Bohnenberger. He left us early in January, but his work will always be here. He belongs with the best California watercolorists, such as Hardie Gramatky, Phil Dyke, Charles Phillipi and Millard Sheets. He studied with Roger Armstrong, a great watercolorist and comic strip artist (assistant to Clifford McBride). The first painting you see up top is Cathy Hill’s oil tribute to John Bohnenberger; “John the Magician”. Our Thursday Morning Irregulars Painting group was painting at the home of Guy Rose, another historic California artist, and Cathy was moved to capture the elusive Mr. John B. at work. He always carried an old video display box with him, notched to hold his drawing board. Here is Cathy’s statement to go along with her painting:

I remember seeing his bold watercolor paintings many years ago. I thought, “Who is this amazing artist?”. Finally, in a San Gabriel Art Association show, someone said, “Thereâ€™s the great John Bohnenberger”â€“Where? I looked. There! I saw a thin little guy with a hat. I was impressed. Later I got to know him.

Mark and I painted with John on Thursdays in a plein air group from the San Gabriel Art Association. As the group changed, sometimes John and Mark and I were the only ones to show up. John always said if he went a day without painting, he didnâ€™t feel right. If he was really happy with his painting that day, he would slap it down and say: “Eat your heart out!” We loved it! He must have had enough award ribbons to stitch them together to make 12 quilts! John was an inspirational sightâ€“throwing water wildly from his brushes and using his self-made desk table from a VHS display box that he tied around his legs (for wind defense) and folded into a carrying suitcase. The last time I saw him was at Julie Abreauâ€™s funeral. She was a wonderful person and watercolor artist. She gave rides in her van to John Bohnenberger and Walter Zetlmaier on Thursdays. She called them “my boys”.

Johnâ€™s work had a bold and sure-of-itself quality, but he was shy about his talent, always avoiding doing demos, and was intimidated by professional artists. But all the professional artists were in awe of him. Painting seemed to come magically and easily to himâ€“even abstract watercolors.

He was truly John the Magician.

I was always begging John for a spot at his watercolor classes, but he turned me down. He said, “You don’t want to be in a class with a lot of old ladies.” (He taught at the retirement home where he lived.Â  Here is John’s statement about himself (original is upstairs):

Cathy and I were very surprised to find that John had done his own version of Cathy’s “John The Magician”. My photo of his painting is second from the top. He really expanded the composition, and depicted himself painting by a river, with Cathy’s rabbit keeping him company. This is one of the few watercolorsÂ John did of himself painting.Â  I’ve also included a snapshot of one of his fine abstract still-lifes. He was just as good at non-representational pictures as he was at painting “reality”. He actually preferred to work from photographs, painting on location didn’t “feel right”. Yet, his paintings from photographs never feel like he was bound by them, but he used the photo as a point of departure and made beautiful paintings of them. John was a master of value, light and shadow as well as color. He knew what to leave out, as well as what to paint. As he got older, John no longer drove, and he turned down rides he was offered, so we saw him less and less. He was a no-show at his one man show that the San Gabriel Art Association did for him last year. He was in the hospital at the time. However, just before they took the show down, John magically appeared and broke his shyness to chat with the patrons about art. Cathy and I didn’t see him there, as we didn’t know he had recovered sufficiently to be at the gallery. How we wish we could have seen him one more time!

John admired “pro” artists, he often told me he wished he could have worked in the animation industry. Maybe he liked comics too! Here’s some:

Â Barker Bill, from 12-13 to 12-26-1954, including the rare Christmas strip! Puddy defeats “Queer-money Quimby” the counterfeiter, after all, he’s 1/16th police dog. The little Gelt is still hungry for greenbacks. In the strips from 12/20 on, the sideshow cast is featured in circus gags, including “Peanuts Perkins”, a classic dumb-guy who is sort of the strip’s Zero. In the Sunday page for 12-26, we see Bob Kuwahara’s version of Kiko, the kangaroo! He is drawn a bit more realistically than the animated Kiko, and carries Puddy in his pouch.

Â Felix from 5-13 to 5-19-1935 continues Danny’s adventures on the Ape’s island. The Ape ties up the sailors who are trying to rescue Danny and Felix, but Felix leads the Ape back to the ship. The mascot is a hero again! In the Sunday, Felix is still cavorting with giants in Dreamland, securing dough for some Elves from the baker Giant. I love the “sock” in the 10th panel, Messmer and Segar really had a knack for action fighting poses. 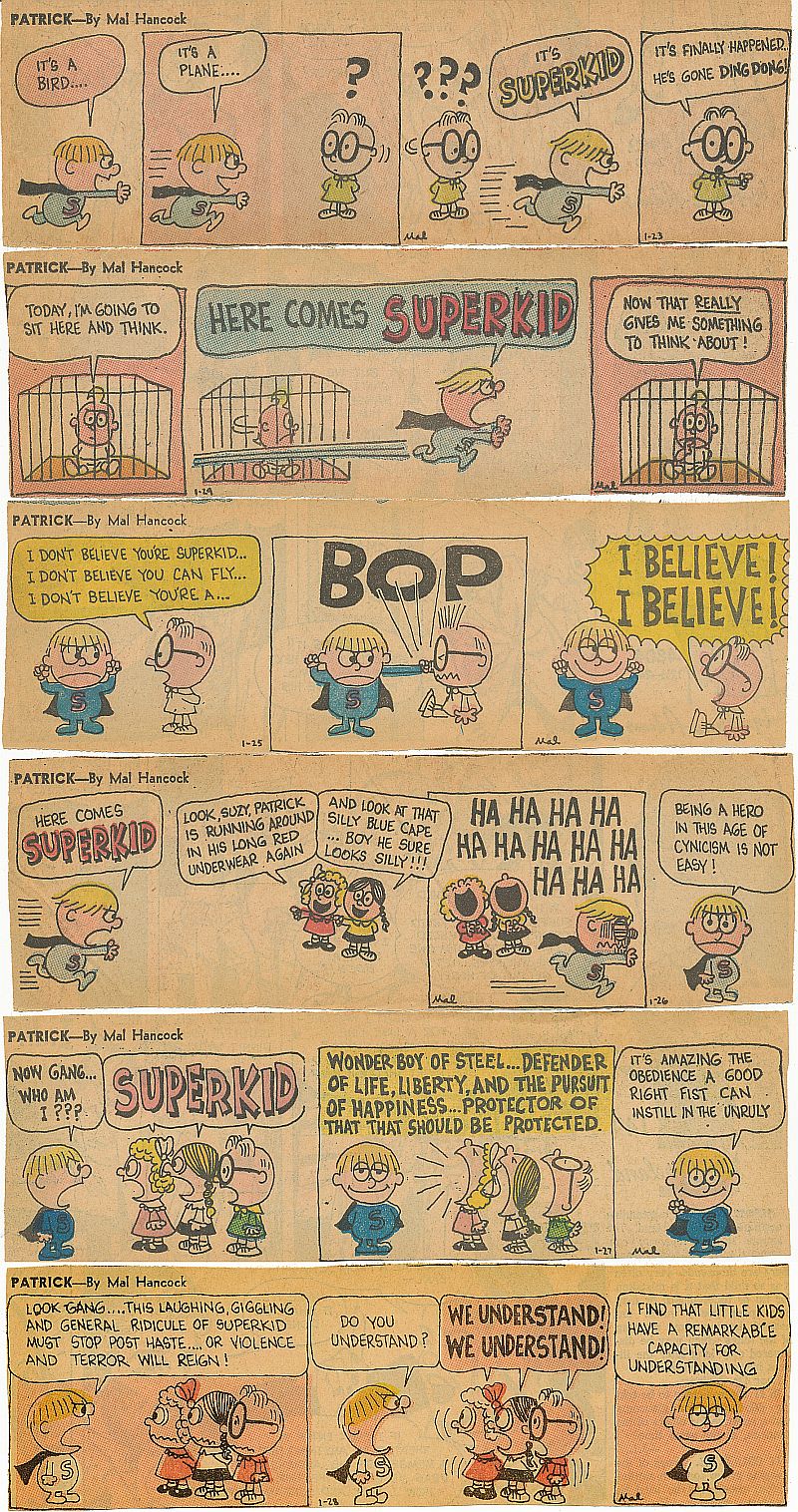 Â Patrick runs roughshod, or is it “supershod”, as Superkid! He lords it over Godfrey, Suzy and Elsa; his brother Nathan can’t understand what Patrick is up to. Maybe Godfrey is right, and Patrick has gone “Ding Dong”.Â  If it hadn’t been for my brother’s unselfish efforts in clipping this strip, we wouldn’t have such nice color scans to read today. I hope the next post will be released under happier circumstances. Farewell John!

Hi Readers, welcome to the first post this year. Barker Bill continues the “Gelt” story line from 11-29 to 12-11-1954. Gumshoe Googan, police detective, is on the job, looking for stolen money. The Gelt eats a counterfeit $50 bill, which makes him sick. Googan is so dumb that he changes five tens for one on the counterfeit fifties. More Kuwahara hi-jinks next time. All but the first two strips this time were courtesy of Yowp. Make sure you visit his blogs, “Yowp” and “Tralfaz” by clicking on the links in the blogroll.

Â Felix, from 5-6 to 5-12-1935, continues the adventures of Danny Dooit and Felix on the tropical island. They escape from the ape, only to be attacked by a panther, an adroit design halfway between real and cartoon. The ape clobbers the panther with a coconut and they fight. I love that beautiful silhouette of Felix and Danny in the 5-8. The Sunday has Felix still stealing food from the Giant, and fending off a dog who is after Felix’s buried bone. Note that Felix has three fingered white gloves in this page. Looks like the deadly Mouse fever has hit Felix’s Dreamland. 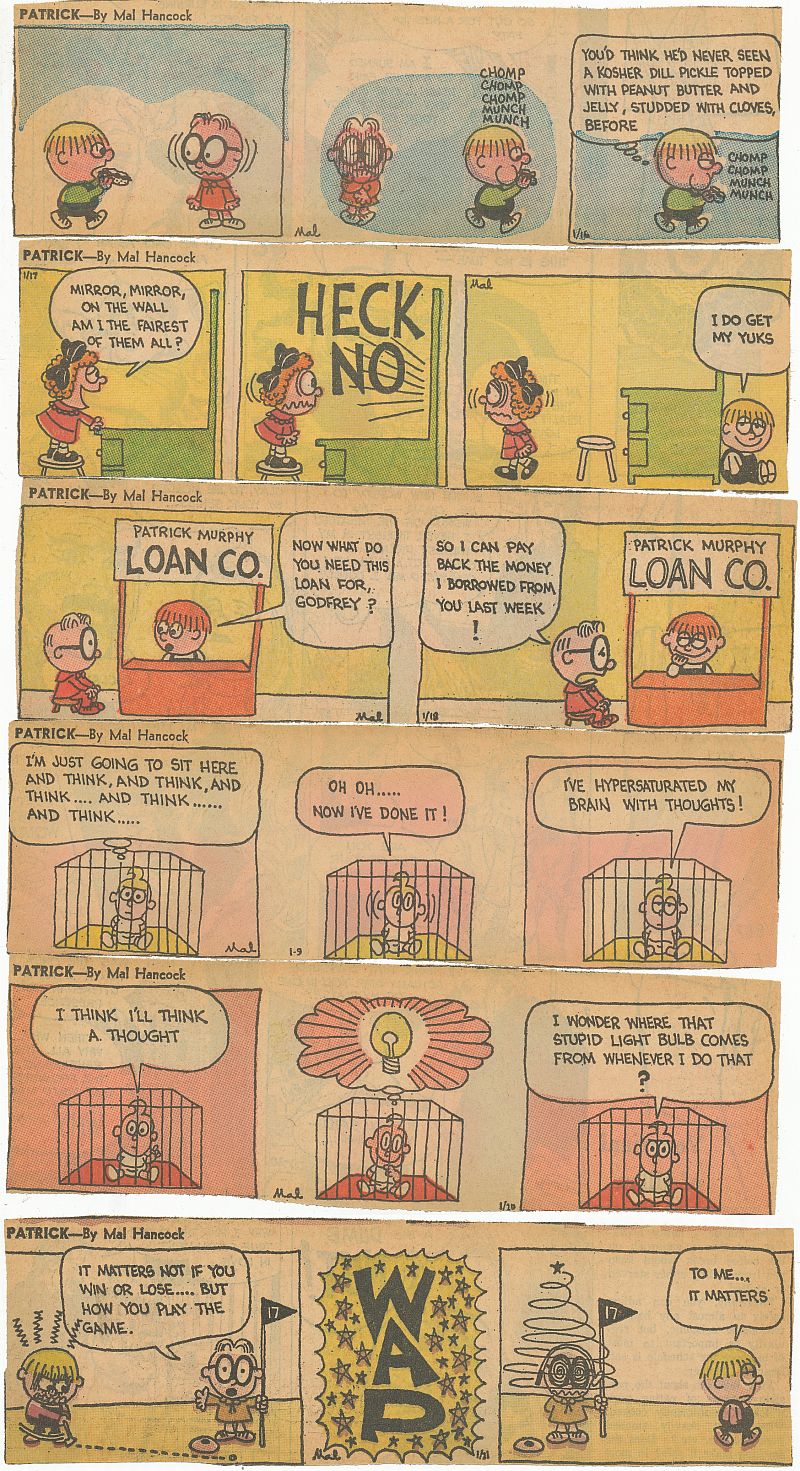 Patrick, from 1-16 to 1-21-1967, features Patrick emulating the early Charlie Brown in the 1-17, frustrating poor Elsa. Godfrey takes his usual lumps, and Nathan the baby makes fun of an icon of Comicana.

Here come the monthly Yogi pages in imitation of Yowp’s fine example. They are from 1-7 to 1-21-1962. Go over to his blog for notes on the strips and see a black and white “tab” version of the 1-28 strip with Quick Draw McGraw as a guest character. The art on the 1-14 and 1-21 episodes and perhaps the 1-7, seem to be the work of Harvey Eisenberg. Some of my readers don’t read me too often because they don’t like to read comics on the Internet. Mike Barrier gets terrible headaches when he tries to read them. My solution, always click on the small strips to enlarge them, and get a Logitech Mouse! There is a little wheel in the center of the mouse. When you spin it, it blows up the contents of the page in front of you. You can even fill the screen with the image, which makes the artwork and inking really stand out for study. If you get this tool, maybe your head won’t hurt so bad. Thanks again to our kind suppliers, my brother Kurt, the good dog Yowp and the fine people at ProQuest newspaper archive and the Glendale Public Library. See you soon.