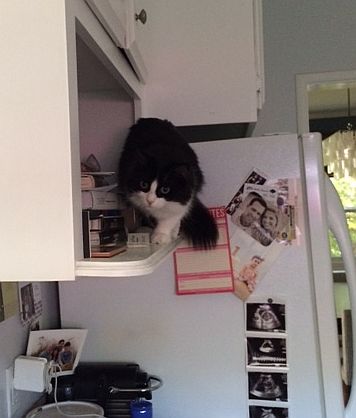 Scout is scouring the shelves in the komics kitchen to find this post’s oldies for you. 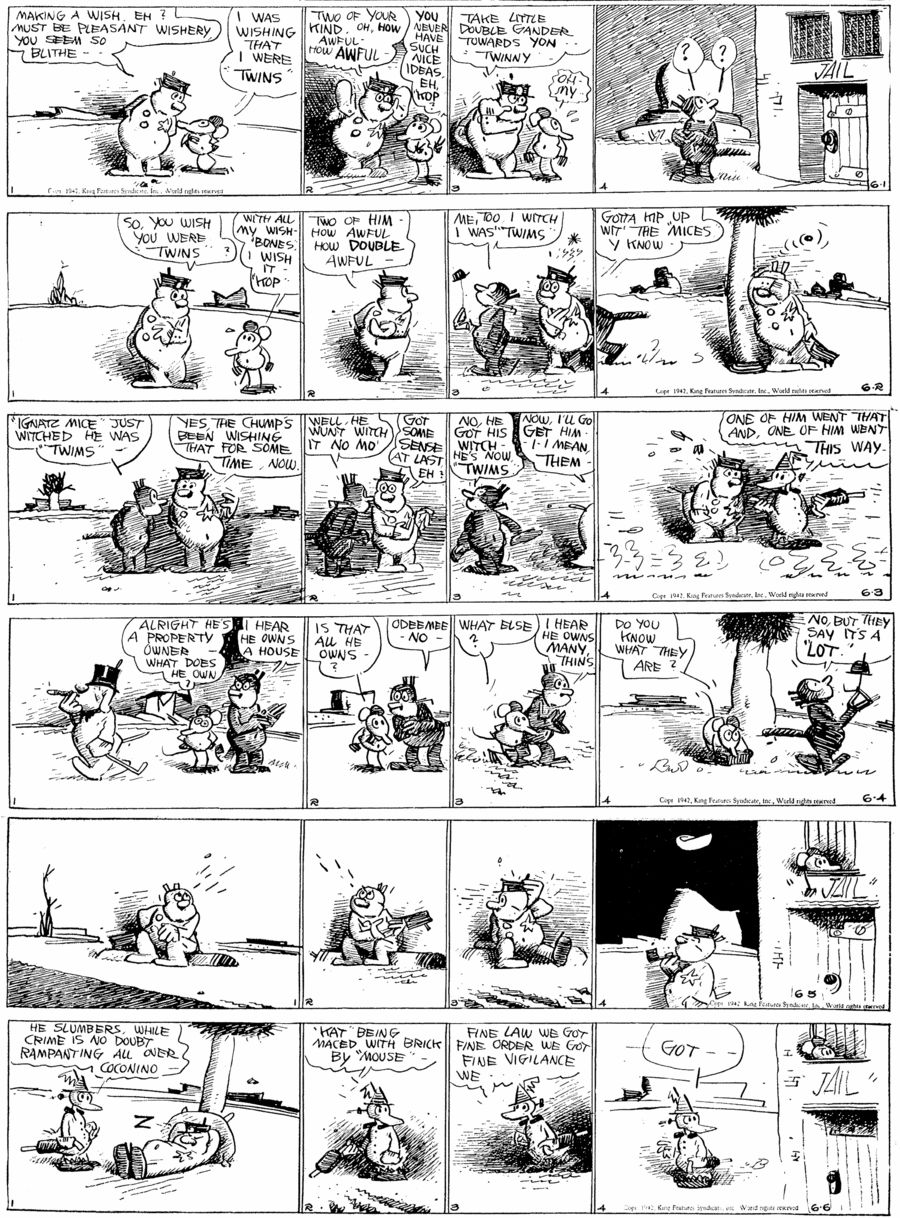 Scout turns up Krazy from 6-1 to 6-6-1942. Garge starts a promising story line in the 6-1 about Ignatz wishing he was twins, and Krazy “witching” she was “twims” in the 6-2. Rather than draw two sets of Kats and Mices, the twin Ignatzes are just suggested in the 6-3, not actually shown. The real winner for this week is the 6-5, told entirely in pantomime as Offissa watches the unseen brick hurtling over his head and puts Ignatz in his jail cell in the last panel. This strip assumes such comfortable familiarity with the tropes of the Krazy Kat characters, that explanation isn’t necessary. 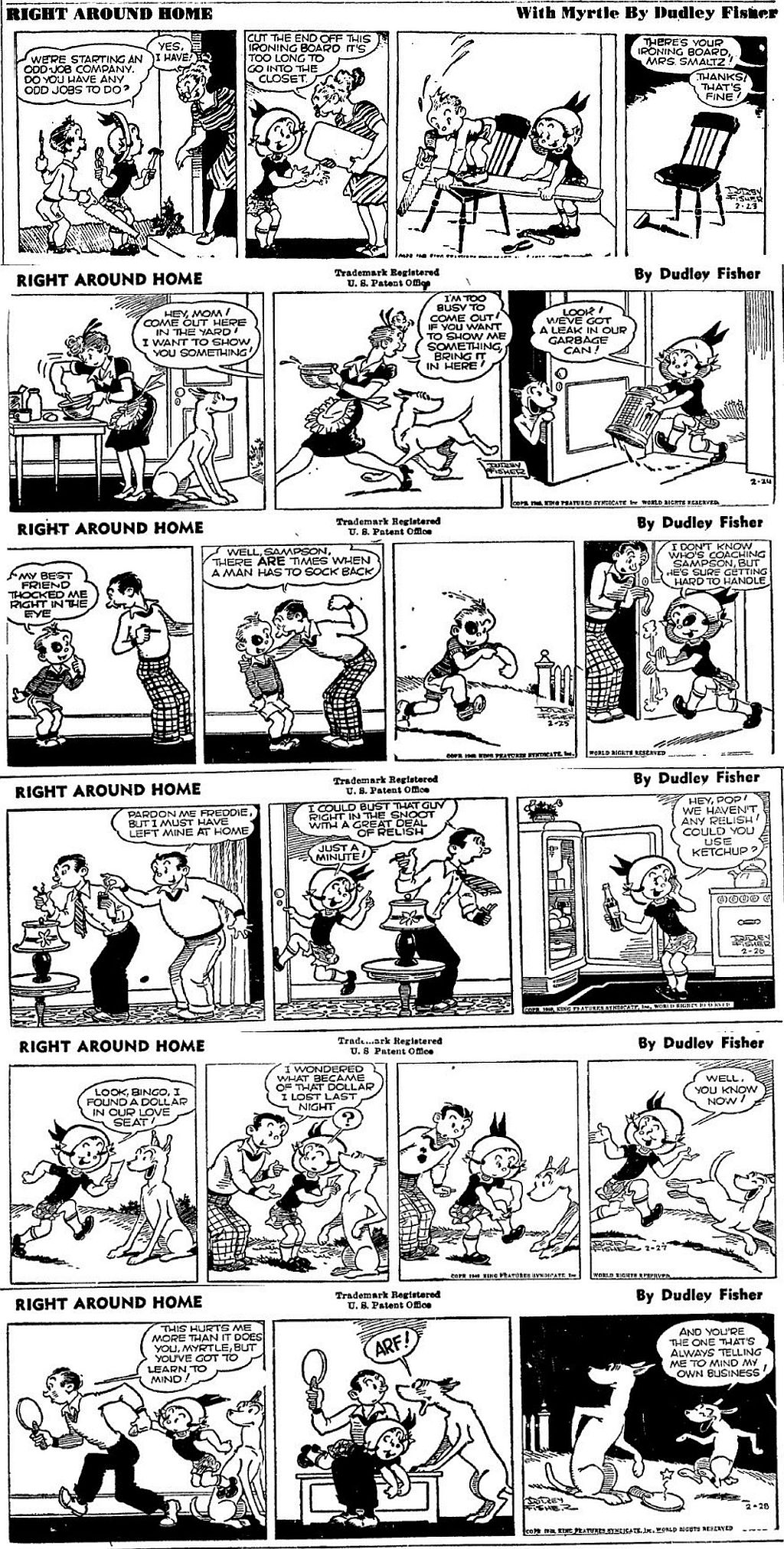 Myrtle this time is from 2-23 to 2-28-1948. The 2-24 is very funny, with Myrtle slopping up her Mom’s kitchen to show her a leaky garbage can, and the 2-28 highlights Bingo’s sacrifice as he takes Myrtle’s punishment. Freddie’s choice of words, “..you’ve got to learn to mind!” seems to apply to dogs more than little girls, anyway.

Felix is now the responsibility of Olaf Yiminy and Yimmy Yiminy, in the strips from 5-21 to 5-27-1934. Mr. Dooit ships Felix to Olaf while he takes the family on vacation, and poor Felix has to deliver himself to Mr. Yiminy’s house to save him the 5 bucks delivery fee. This endears Felix to the very cheap Mr. Yiminy. Of course his son Yimmy is going to be Felix’s great defender. In the Sunday page, Felix is snubbed by the sled dogs, and then he’s forced to pull the sled with every dog riding it. It’s lucky that Felix is at the South Pole or he’d really sweat from pulling that heavy load.

The Yogi Sundays from August 1964 are here! Yowp whose blog is located at: www.yowpyowp.blogspot.com is the unofficial champeen Hanna-Barbera historian, and claims that he can no longer supply the half-page Yogi Sunday comicsÂ  from his Canadian newspaper archive sources. So here are the third-page versions that I clipped from the St. Louis Post-Dispatch back then. The 8-2 and 8-16 strips are still on the “Hey There, It’s Yogi Bear” promotional band wagon. Yowp was especially interested in the 8-16, as Yogi’s namesake, Yogi Berra, the baseball man is shown in caricature. The key artist on these is Harvey Eisenberg, I don’t know if he did Mr. Berra’s caricature or not. (By the way, Don, if you want me to send you scans of any of these pages for your own blog, you have only to ask.)

I don’t know how to block robot comments on this blog, so she’s wide open for the one-size-doesn’t-fit-all letters we get by the ton. Most of them say, “Your blog is very well-written, I learned a lot from it”, or “what a wonderful article” or “I’ll bookmark your site and visit often”. If only these comments came from real people and not from gmail or insurance companies or other instant mail generators. Robots, if you want your comments to be seen by my readers, you’re barking up the wrong cat! Bug off, or I’ll send you to the moon, with my magic spoon! 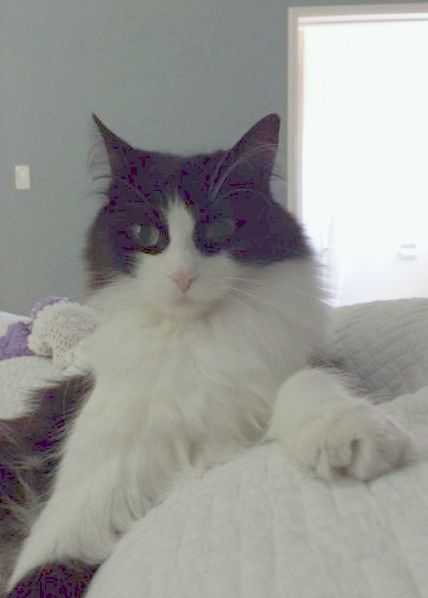 Scout welcomes you into the inner sanctum of her Comics Room for a new batch of old stuff! 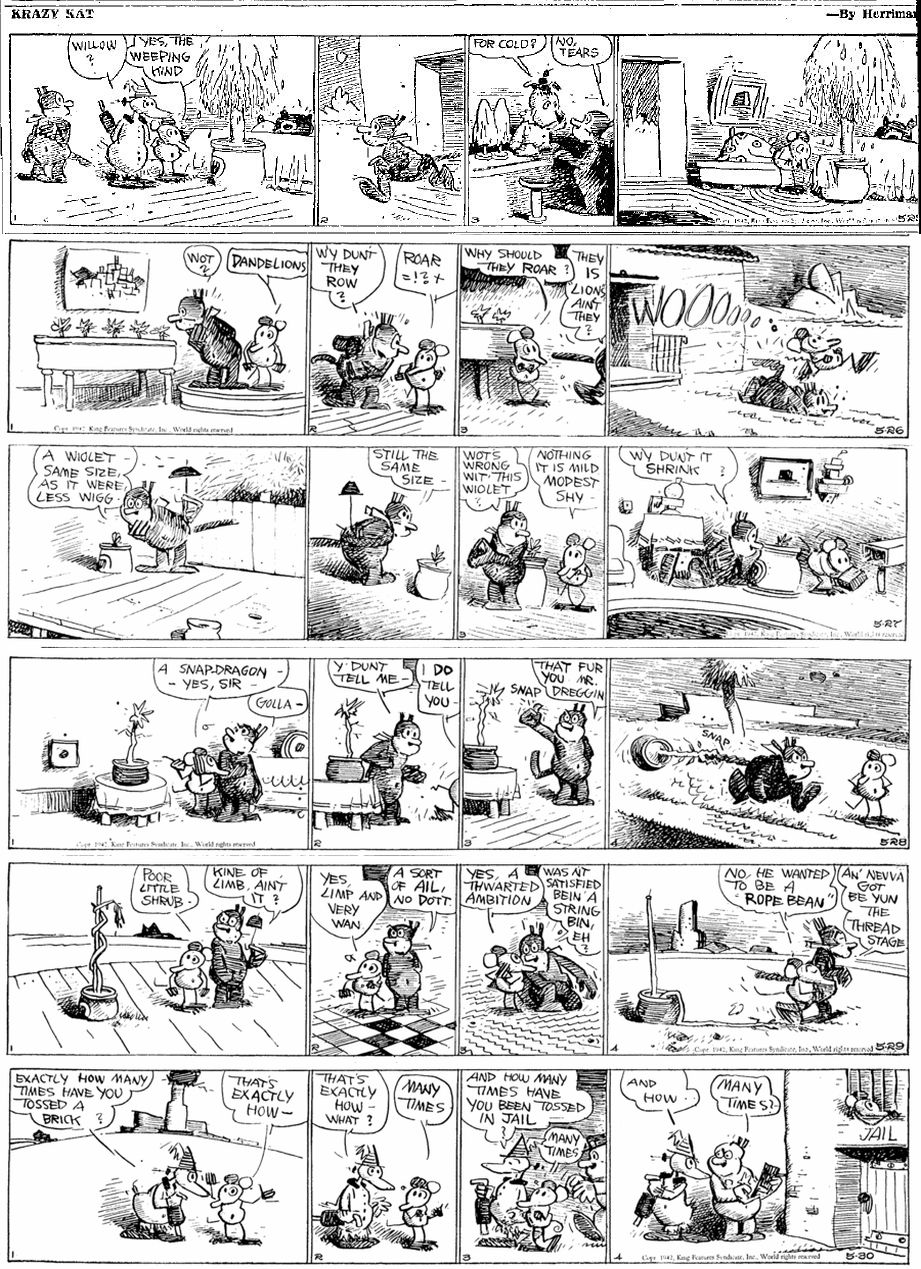 KK is from 5-25 to 5-30-1942 this time. You’ll note that all the gags except the 5-30 are potted plant jokes. Sort of Organic Krazy. The Kat Langwidge in the 5-27 stumped me for a bit, but I figured it out: “A Wiolet, same size as it were less wigg..” , that’s “last week” in the Kat tongue. The 5-25 was derived from the San Antonio Light of the same date, so much for the completeness of the King Features Archives.

Myrtle is from 2-16 to 2-22-1948 this time out. There are a lot of animal gags this time, featuring Hyacinth the cat, Junior the dog and Ebuceci the exotic Alaskan dog. Being that this is the Catblog, pay special attention to the 2-17, as Myrtle begs Hyacinth to catch just “One Little Mouse”, to cover her cookie thievery. We also have the Sunday page from 2-22, with Dudley Fisher’s patented downshot type layouts. These should be Uncle George’s favorite strips (that’s really an inside joke)!

Felix’s luck runs hot and cold as usual in the strips from 5-14 to 5-20-1934. Felix escapes the gas chamber at the Dog Pound, and gets back in the good graces of the Dooit family. It seems that the bulldogs he freed from the Pound were the property of a wealthy dog breeder and he rewards Mr. Dooit with a big check for Felix’s brave deed. However, Mr. Dooit decides to take the family to Europe with Felix’s check, and boxes Felix up to send him to Uncle Olaf for safe keeping. We’ll see what kind of cat care Felix gets from Olaf next time. In the Sunday, Felix gets into a chase with a fierce sled dog in Antarctica and gets a prop plane flying by mixing it up in the propeller with the aggravated canine. The pilots at last make Felix their mascot. I wonder how long will Felix’s good fortune last in the frozen wastes?