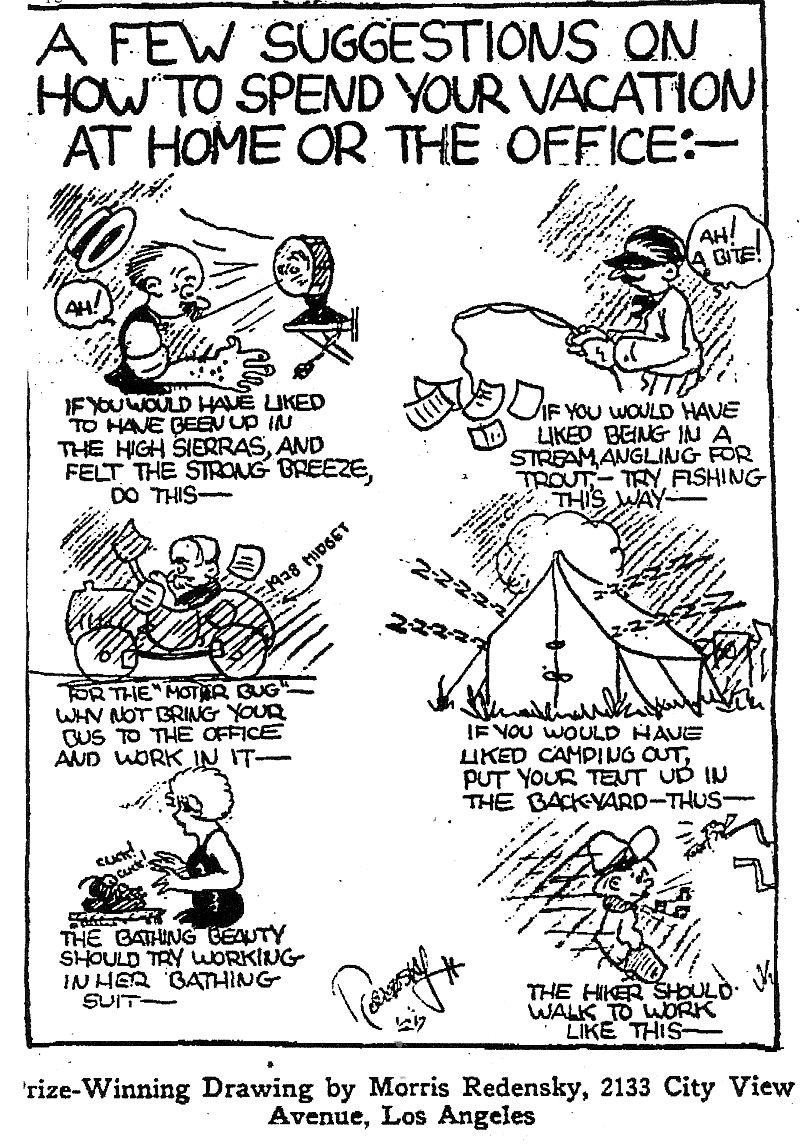 Â Welcome to another chapter of Los Angeles Junior Times comics and funny drawings from May 1927! We start off with the comics of Morris Redensky, later known as Morey Reden (1912-1981). Morey animated at Disney, did animation and story at Famous Studios and worked a long time at Hanna-Barbera. He created the characters Hank Hambone and Jim Dandy (before Pal) for Aunt Dolly’s paper. 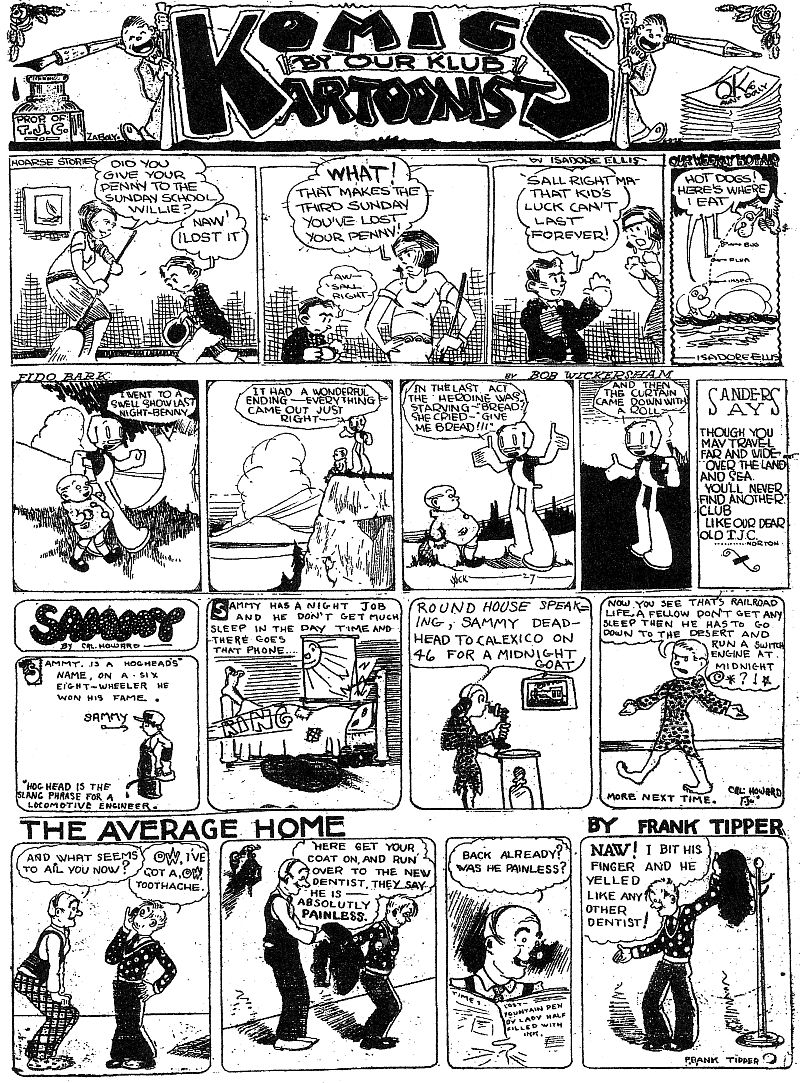 Â Here’s the other comic strips for the month of May, featuring the work of Louie Salkin (1913-1993, UPA, Disney), Frank Tipper (1909-1963, animator for Ted Eshbaugh-“Wizard of Oz” animator for Schlesinger and Lantz and painted B.G.S on the first Huckleberry Hound cartoons), Bob Wickersham (1911-1962, animator for Disney/Fleischer/Warner Bros., Director at Screen Gems-“Snap Happy Traps”, “Willoughby’s Magic Hat”, “Room and Bored”, developed the charactersÂ and drew comic books of the Fox and the Crow, wrote the screen adaptation for “Mr. Bug Goes To Town” with Cal Howard for Fleischer), Cal Howard (1911-1993, Directed “Katnip Kollege” for Schlesinger, did the voice of Gabby Goat in the Porky Pig cartoons, wrote the stories for “Snap Happy Traps”-Screen Gems, “Canned Feud”-Warner Bros., “Spookananny” and many others for Walter Lantz), Herbert Gramatky (Hardie Gramatky’s brother), Bill Zaboly (1910-1985, drew the comic strips Otto Honk and Thimble Theater), Isadore Ellis (1910-1994, animated on the Clampett classics: “Porky in Wackyland”, “Baby Bottleneck” and “The Great Piggy Bank Robbery” among others, also animated for Bob McKimson and Frank Tashlin at Schlesinger’s), Philip De Lara (1910-1994, animated on the Bob McKimson cartoons: “A Lad In His Lamp”, “A Fractured Leghorn”, “Early To Bet” and wrote the Daffy Duck cartoon “Quack Shot” for McKimson). So most of these boy cartoonists were 15 or 16 when they were published in the Junior Times. 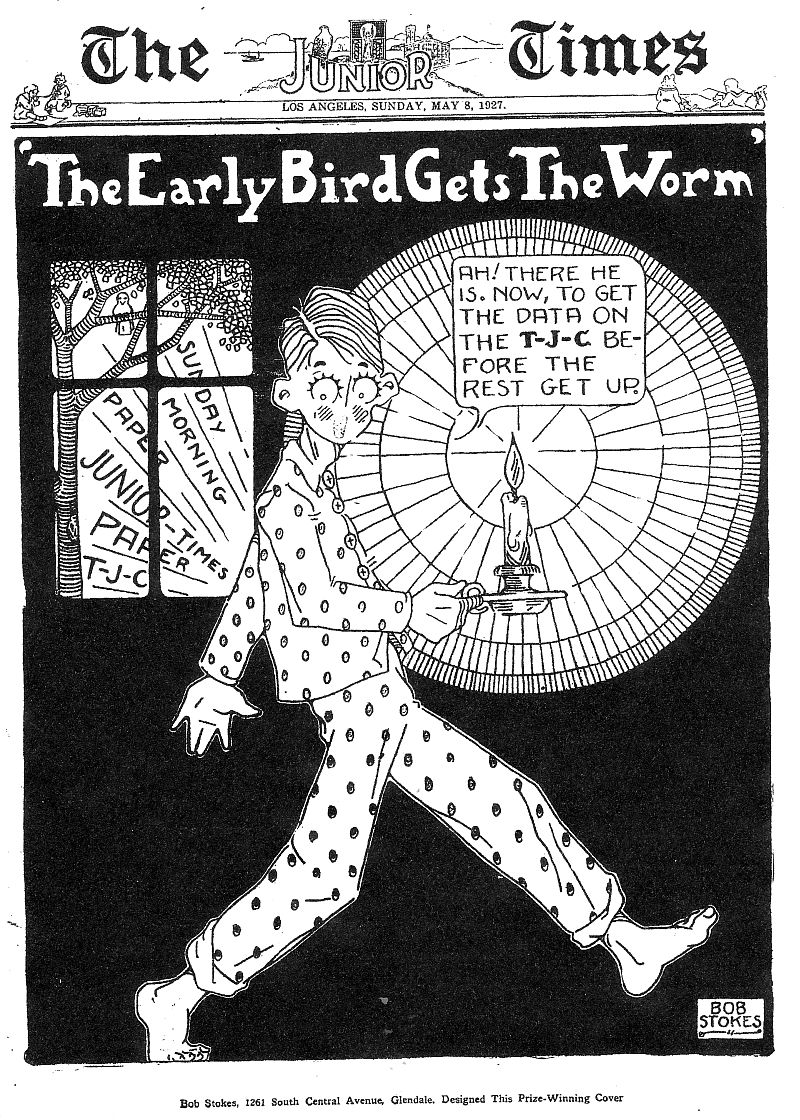 Â Here’s a cover drawing that Bob Stokes did for the May 8th issue (1908-1980, animated on Bosko for Hugh Harman, for Ub Iwerks-“Humpty Dumpty” and others, for Disney, “Woodland Cafe” and “Snow White and the Seven Dwarfs” among others). Hugh didn’t want to lose Stokes to Walt Disney, but admitted to me that he felt Stokes did great work on the character of Snow White, and thought him to be one of the great draughtsmen of animation. These Junior Times posts are a lot of work, hope you enjoy them! Next time, more comics!

Â Here is Duane Crowther’s letter from 4-12-1955 to “The Wonderful Balsers”. Matt Crowther’s coming birth is eagerly looked forward to by Duane and Susanne as Duane marvels over how active the baby is, kicking the mother! This was the prevailing attitude toward children in the 1950s, millions of peopleÂ died during World War 2, so let’s re-populate the world! Duane is eager to move to California, and he sizes up the TVÂ commercials scene in New York and Los Angeles very incisively: “The West Coast TV studios (Patin,Â Storyboard and the like) areÂ doing much better, sharper and more creative stuff; but for whom? That’s why outfits like Transfilm, Academy (Pictures)Â and Culhane (Shamus Culhane Productions) will always make more money turning out more crap than anywhere else.” I can hear Duane’s voice in my head as I read those lines, he could be quite caustic in summing upÂ the animation field, but he usually did it with a disarming smile. It’s interesting to note the pay differences between the two coasts in theÂ early days of TV commercials, and the lack of “prestige” among West Coast clients. Â 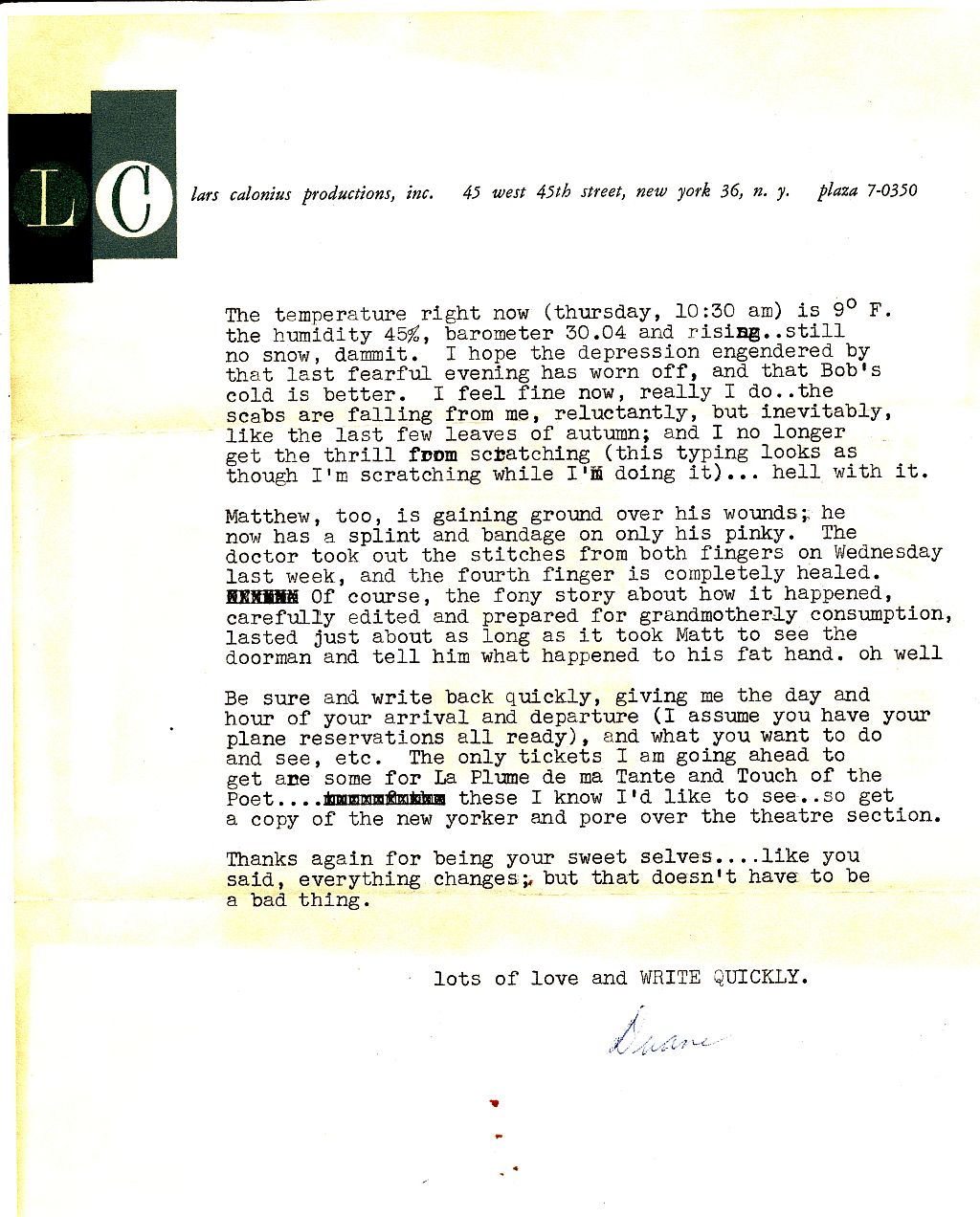 Â The final letter that the Balsers saved from Duane, is an undated one on Lars Calonius Productions stationery. It’s obviously a couple of years post-1955, as Duane relates a tale of an injury that young Matt Crowther experienced. By this time, Duane has changed jobs from Transfilm to Lars Calonius. I remember him talking a little about Lars, he liked the guy and had good memories of working for him. By this time Duane was directing as well as animating commercials and industrials. Duane was equally adept at both character and what they used to call “technical” animation, gears, pistons, bricks slapping down to create a building, charts, graphs and the like. I watched Duane turning out animation of a striped chart moving around in a cycle while he was working at Fred Calvert’s studio. He was animating with one hand and playing a game of chess with the other! 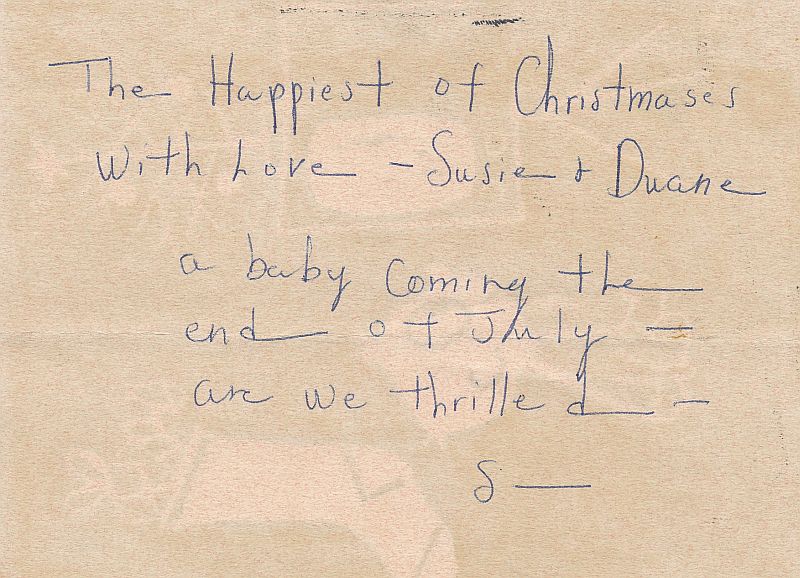 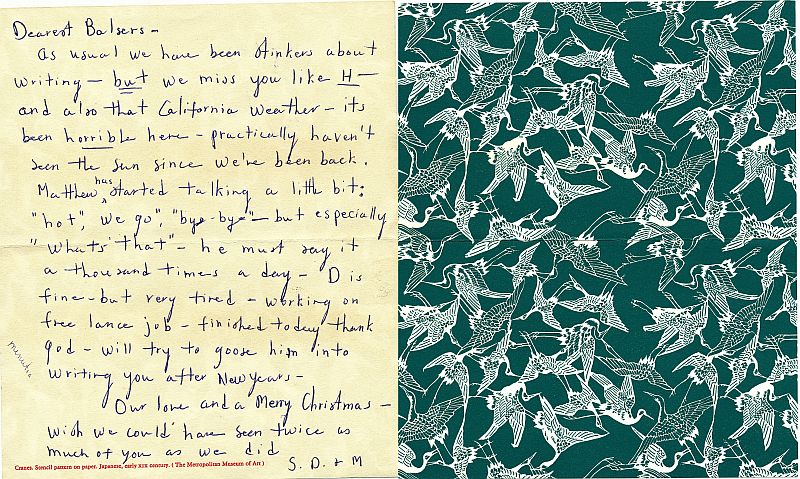 Â These last twoÂ letters are ChristmasÂ notesÂ from Susanne Crowther both before and after Matt’s birth. I like her description of teaching Matt to talk and what some of his first words were. Her description of New York weather, “It’s beenÂ horrible here..!”, certainly forecasts the Crowther’s eventual move to Malibu, California. I’m not sure where Duane was born in Cal., but maybe he was a beach kid. Â And with that, we close the archive of Duane’s letters to the Balsers for now. Many thanks again to Bob and Cima Balser for allowing me to print these here for the first time, and the kind permission of Duane’s widow, Cathy Karol-Crowther, to share them with you. If I’ve made any mistakes in my notes, please let me know and I’ll fix up the errors.

Â From Duane’s LEAST favorite studio, and in response to Yowp, here is the Flintstones Sunday page from 2-3-1963. It’s the third-page version. To see the half-page version and the rest of the Flintstones Sundays from February, 1963, just click on the link to Yowp’s blog over on your right. This could be another Dick Bickenbach effort. About this time, Wilma became pregnant with Pebbles, and the strip changed. I must have lost interest about this time, because I stoppedÂ cutting out the strip until July of 1963. Maybe Pebbles was just too cute for me. My flesh crawled when she plugged the sponsor’s product on the TV show (Welch’s grape juice) by calling it “Woo-Woo Gwape Joo”! Yeesh! 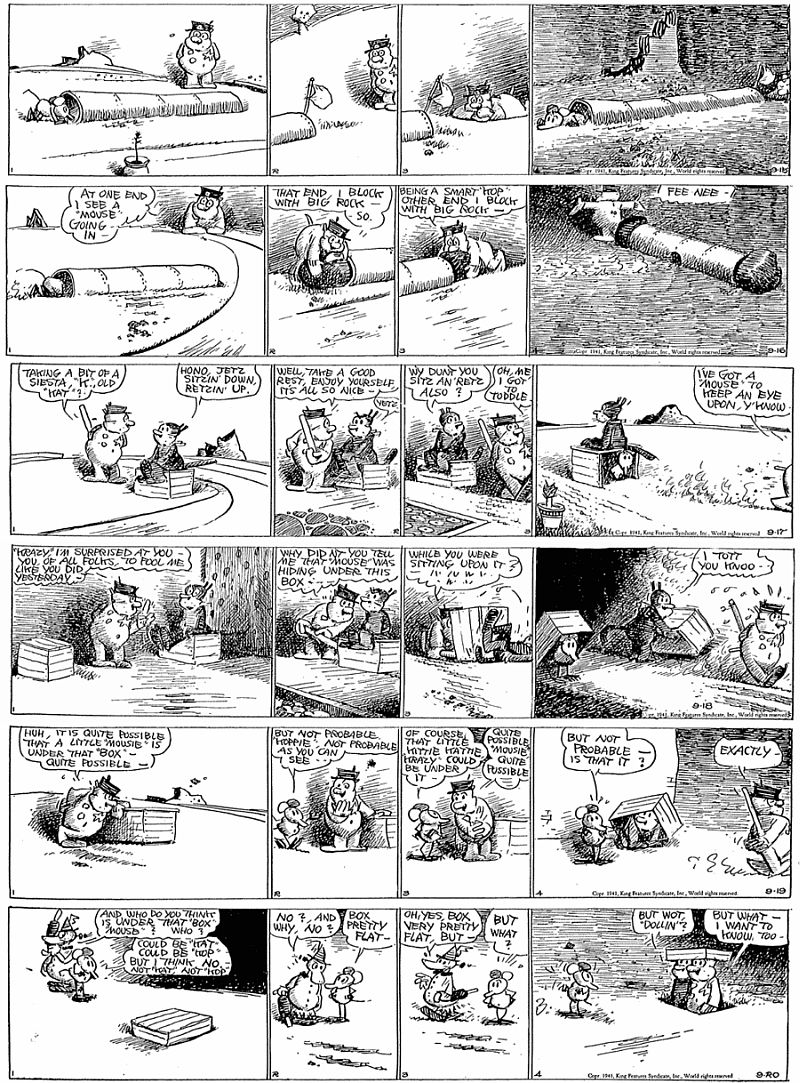 Â Hey Hey, here’s your comics page, infrequently but sincerely submitted with two kats, a little girl and a bear as your stars. Up first are the Krazys from 9-15 to 9-20-1941. The 9-15 and 9-16 eps. feature Ignatz crawling through a pipe to escape Offissa Pupp, which the mice pulls off quite neatly. In the 9-17 through 9-20 installments, Ignatz mostly hides in boxes of various sizes and shapes until Pupp and Kat figure out how to dig a hole in the ground underneath a box lid. Herriman can ring changes on the most ordinary of props for days and keep us entertained.

Â Felix continues to search for Danny’s diamond on board ship this time, from 11-4 to 11-10-1935. The sailor who now has the diamond hides it in his tobacco tin, then manages to hi-jack every one of his shipmates’ pipes and toss them overboard. His scheme is to remove the implements of smoking, so that no sailor will ask for a pinch of his tobacco. In spite of all this finagling, the diamond winds up in the soup (Chinese soup, that is). In the Sunday, Bobby Dazzler and Chip lament the lack of “Funnies”, as Dad reads the New York Times (without comics). Felix helps a hen-pecked husband with the Professor’s Noise Silencer, but gets clobbered by the baby in the last panel.

Â Myrtle from 6-9 to 6-14-1947 has quite a few gems among the straw. I like the 6-9 as Mr. Smaltz theÂ grocer is left to freeze to death, locked in his cooler as Myrtle’s friend Gussie pretends to be a ventriloquist imitating Smaltz’s voice asking for help! I like Myrtle’s embarrassed reaction in the last panel of the 6-12 as her Mom catches her with her hands in the cookie jar, and of course, I’m a puss-over for cat jokes as Hyacinth the cat is taken home by Myrtle in a sack with only her four legs exposed in the 6-14. It’s nice to see that Mr. Smaltz didn’t freeze to death after all. 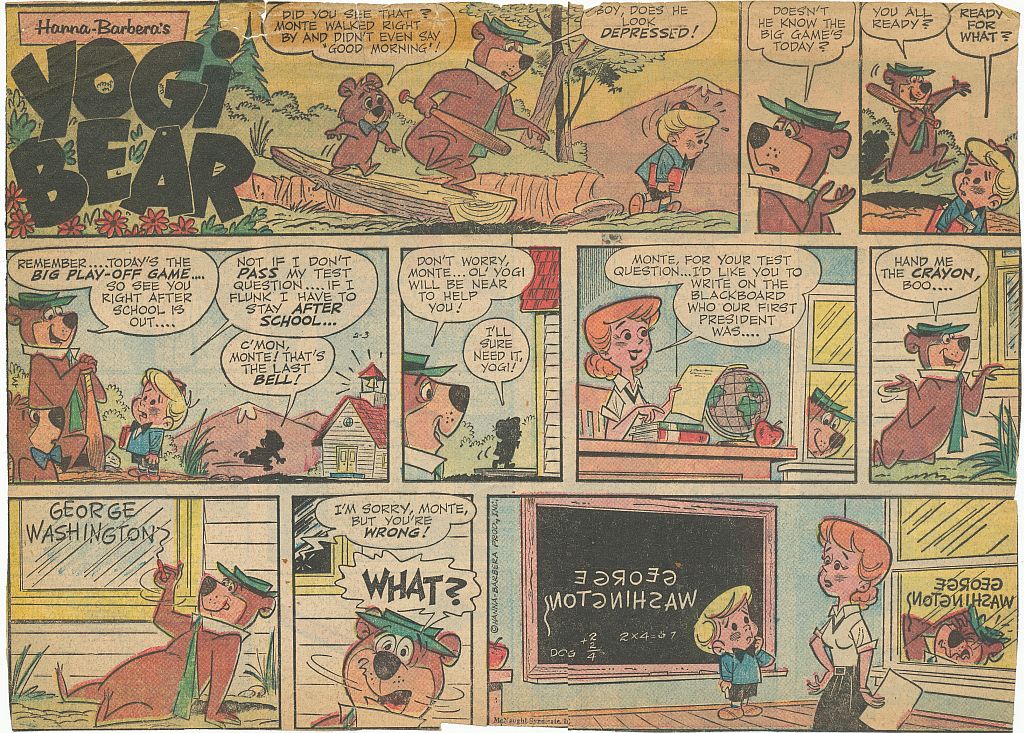 Once again Yowp has awakened me from a long winter’s nap to force another load of Yogi Sunday pages upon you. These are all from February, 1963. The 2-3 is the only half-page edition this time, I have the 2-10 and 2-24 strips in third page. I’m missing the 2-17. However, YOU know where to find the missing strip and see the half page versions of the Yogi Bear strip in beautiful black and white, don’t you? Just go to the right of the page and click on YOWP in the blogroll. You’ll find the pages and the dog’s comments along with them. He attributes the design of the kid characters in the above stripsÂ to Gene Hazelton. I vote for Harvey Eisenberg as the main artist on these. He also designed the “Yogi Bear” logo on the 2-3. The 2-3 is a bit brittle on the top, I had to piece it together for the scan. It’s not in too bad a shape, however for a piece of newsprint 50 years old this month! I should be back soon with a few more letters from Duane Crowther!