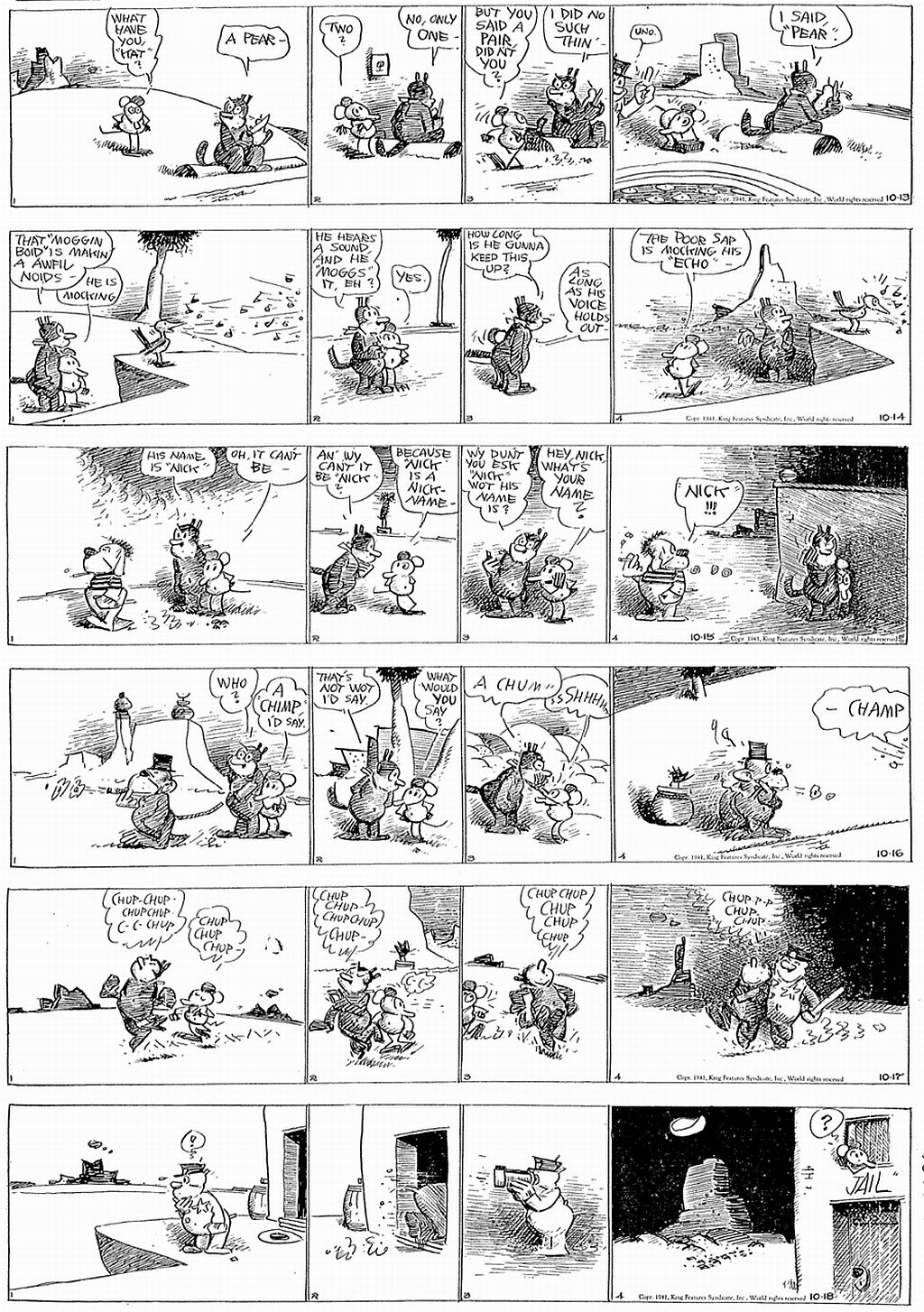 Â In Krazy this time from 10-13 to 10-18-1941, Garge is just doing separate gags for each day. The 10-17 may or not be related to the 10-16, as Krazy tries to call a “chimp”, a “chump”. The 10-17 has Krazy, Ignatz and Offissa Pupp trotting along singing “Chup, Chup, Chup, etc.”, may have been an extension of the “chimp, chump” idea, or it could be a salute to the Andrews Sisters’ #5 hit of 1939, “Well Alright!” in which the sisters sing “Well Alright, well chop, chop, chop, well alright..”. They repeat the “chop, chop” refrain throughout the record. Perhaps Garge heard the tune on the radio and worked it into the strip, just a theory. The 10-18 strip shows just intoÂ howÂ few panelsÂ the “Krazy, Ignatz, Brick, Jail” formula could be distilled. All we have to see is Offissa Pupp looking out to the Coconino horizon through field glasses, then cut to Ignatz in the cell.

Â In Felix, from 12-2 to 12-8-1935, Felix is at last smuggled ashore by Wong, the ship’s cook. Wong also manages to come up with Felix’s diamond, smuggled on land inside a fish! At last we meet Ah Fooy, the Tong leader who figures in much of the 1936 dailies. He’s more than happy to use the diamond to finance plans for his secret empire, Sax Rohmer would have been proud. In the Sunday, Felix inhales some Chameleon extract in the Professor’s lab and acquires the ability to change color with his mood. Now everybody, print the page out and color Felix according to the script, I’ll bet you’ll get better results than most papers of 1935 could come up with! 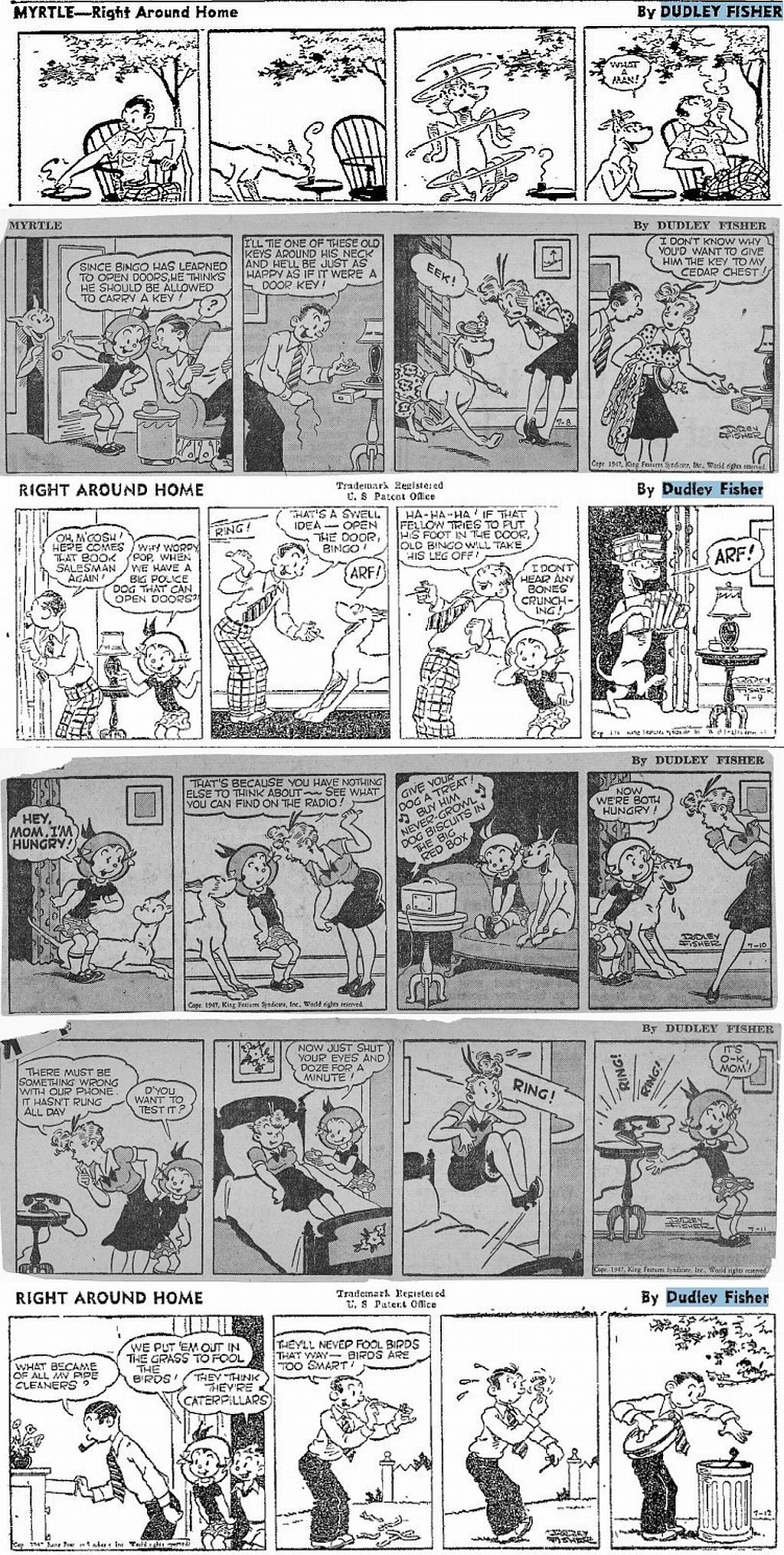 Â In Myrtle this time, (7-7 to 7-12-1947) Bingo stars in four strips. My favorite is the 7-9, where the fierce guard dog is supposed to chase the book salesman away, but winds up buying two pawloads of books! I remember the days of the door-to-door salesmen very vividly from childhood. In St. Louis in 1949 to 1954, we still had salesmen coming to the door with encyclopedias, as well as junkmen with horse-drawn wagons trying to pick up refuse cheap! They were the original “recyclers”. Photographers sometimes came around our house with a pony and a little cowboy outfit. My Mom fell for their line, and a photograph exists of my brother and I on ponies with cowboy hat, chaps and pistols. You’ll never see the likes of those photographers coming to your door anymore, now all we seem to get is Jehovah’s Witnesses! To get back to the strip, Freddie’s smelly pipe opens and closes the week, as Bingo admires Pop’s ability to smoke the darn thing in the 7-7, and a pipe cleaner (very cartoony idea) rebels at cleaningÂ the offending calabashÂ in the 7-12. The image quality of the Myrtles will dip a bit in the following weeks, as my run of original clipped dailies runs out. I have to substitute the missing strips from Newspaper Archive, and the quality is mostly on the down side. We’ll see you soon with more favorites from old newspapers. 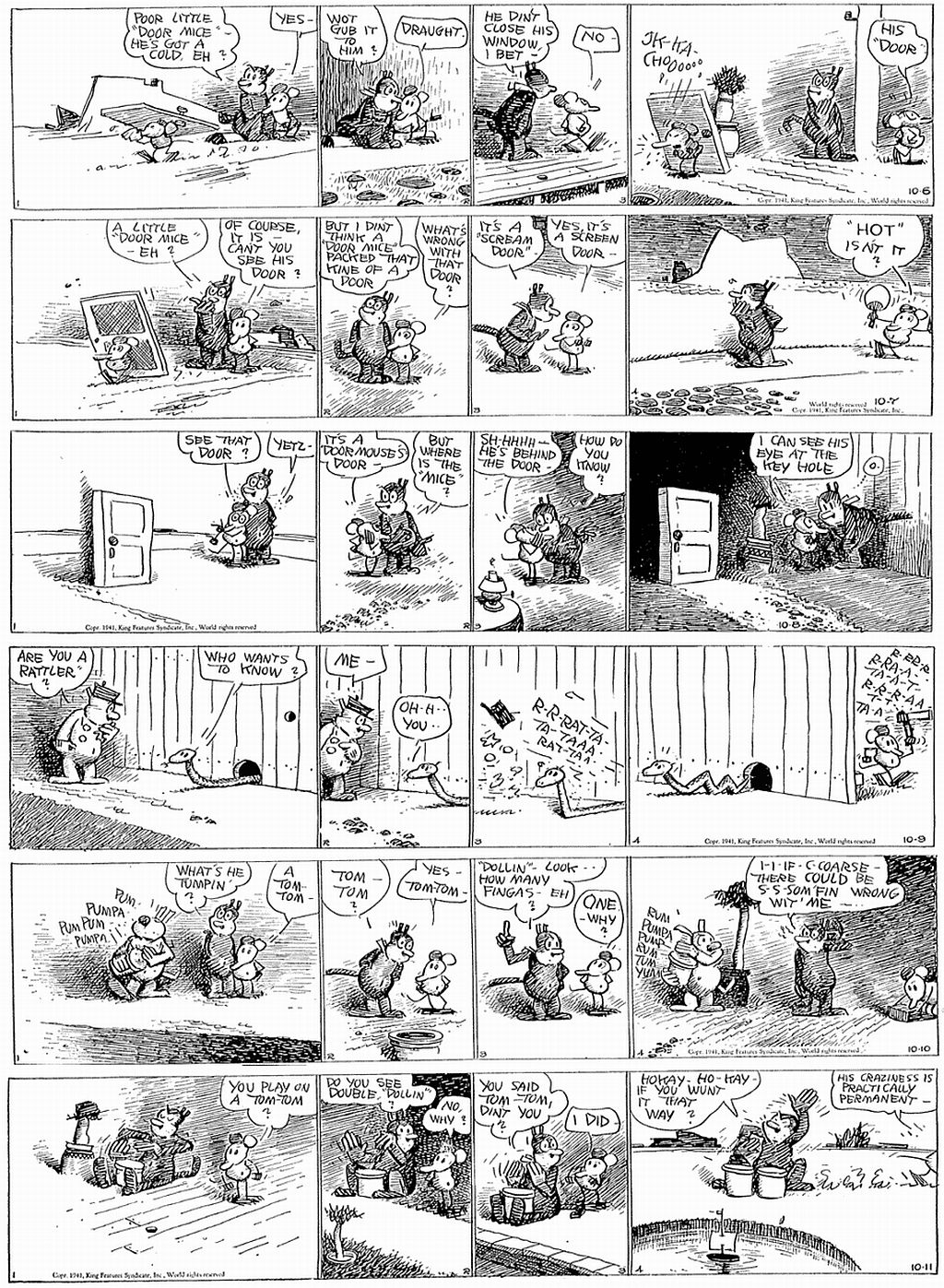 Â In Krazy this time, 10-6 to 10-11-1941, Garge trots out one of his favorite vehicles, the “Door-Mice”. He got a lot of mileage out of that basic pun, “Dormouse” and “Door-Mice”, and here he spins more gold out of that straw, to mix a metaphor. There is a visit from a Herriman rattle snake, then Krazy and Ignatz trade nonsequiters about a pair of Tom-Tom drums. Ignatz’s comment on KrazyÂ in the 10-11 is so iconic: “His craziness is practically permanent”.Â

Â It’s “Felix Pathetique” this time, as Felix strikes out in both the daily continuity and Sunday page, from 11-15 to 12-1-1935. Felix is very nearly reunited with the precious diamond aboard the ape’s ship in the 11-17, but loses it again and isn’t even allowed to come ashore in the 11-30, because the Captain won’t pay duty on Felix. In the Sunday page, Felix tries to rescue the professor’s mind-reading formula from a burglar, but only succeeds in attracting the metal box it was stored in with a giant magnet. We’ll see if Felix redeems himself next time. 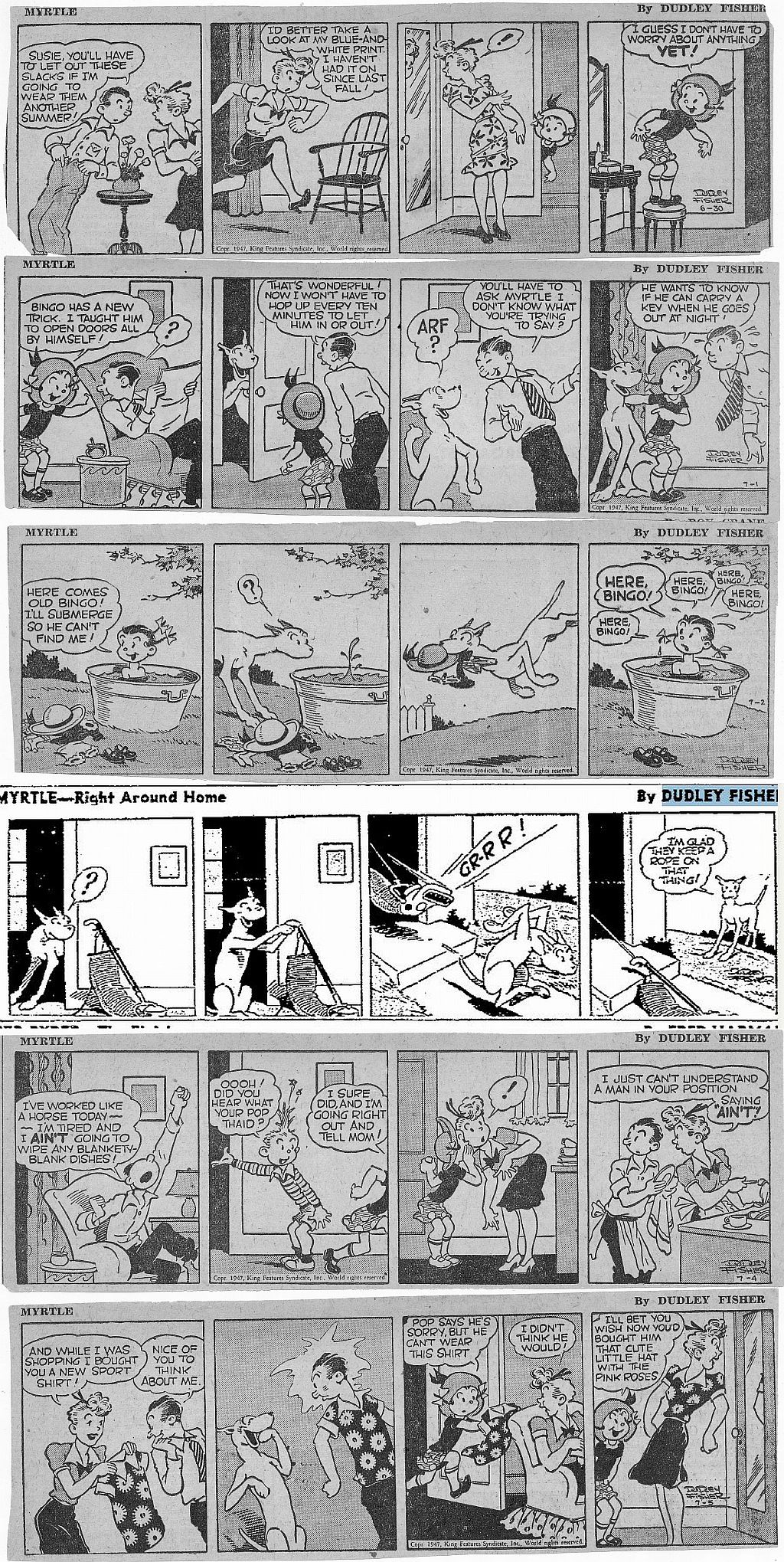 Â In Myrtle, from 6-30 to 7-5-1947, Myrtle is proud of her rear shape in the 6-30, Bingo steals her clothes while she is bathing in the 7-2, Freddie is punished for saying “Ain’t”, when he has actually used much sharper language in the 7-4, and Susie buys a rather “fem” shirt for Freddie, knowing full well that she will wind up with it in the 7-5.

Â Beautiful art by Harvey Eisenberg on this month’s Yogi Sunday pages, from April, 1963. Just click the thumbnails to blow them up. The 4-14 has a funny twist, with Cupid shooting Boo-Boo instead of Yogi. Boob winds up with Cindy Bear! In the 4-21, check out what life was like before Xerox photocopiers were commonplace, as Mister Ranger dreams that Yogi falls into his duplicating machine, mimeograph no doubt! In the 4-28, Mister Ranger does a real “Tom and Jerry” take, as he pulls out the entire electrical wiring system from his cabin! Check out Yogi’s understated pose in the same panel, niceÂ acting from the animated/comic strip bear.Â  Check the link to Yowp’s page in the Blogroll list, he will probably be posting the half-page versions of these strips very soon. I’m having fun posting these comic pages, I’ll do another Junior Times, one of these days. C ya.