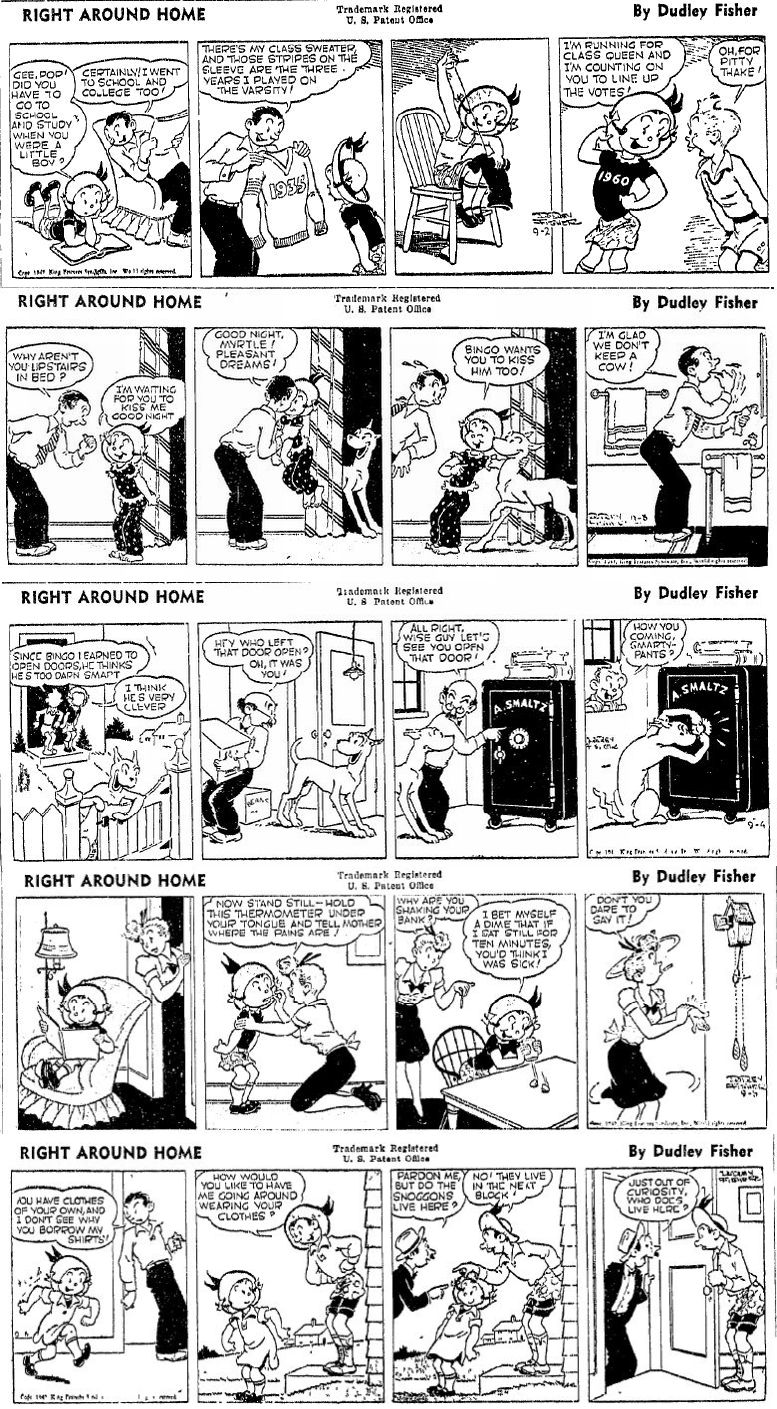 Well, here’s Myrtle from 9-2 to 9-6-1947. 9-1 is missing and didn’t turn up in the Newspaper Archive files. Bingo’s door opening skills are really put to the test in the 9-4, and Myrtle and her Dad switch clothes in the 9-6. Next time, we re-join the clipped run of the strip, hopefully there won’t be any missing ones. 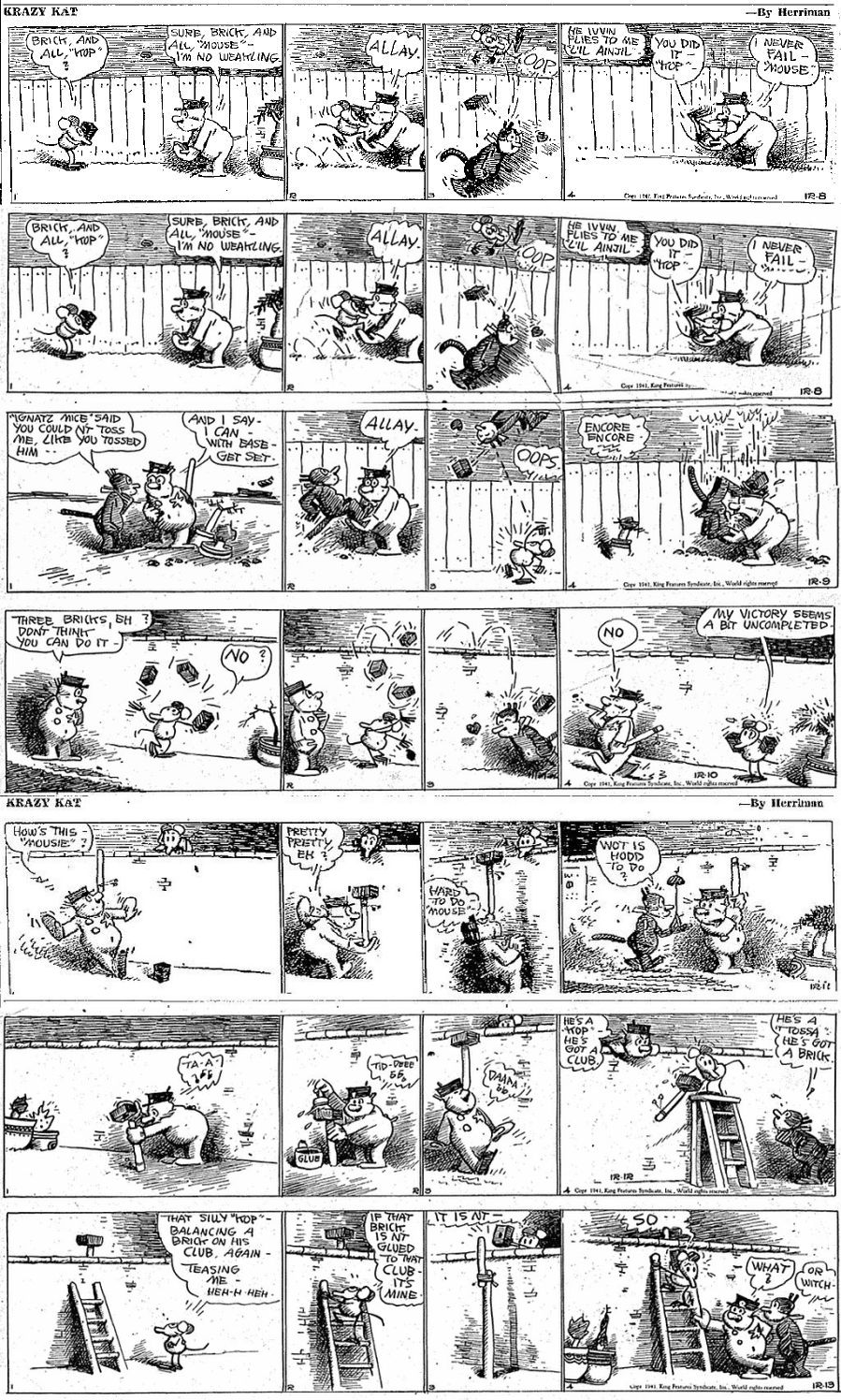 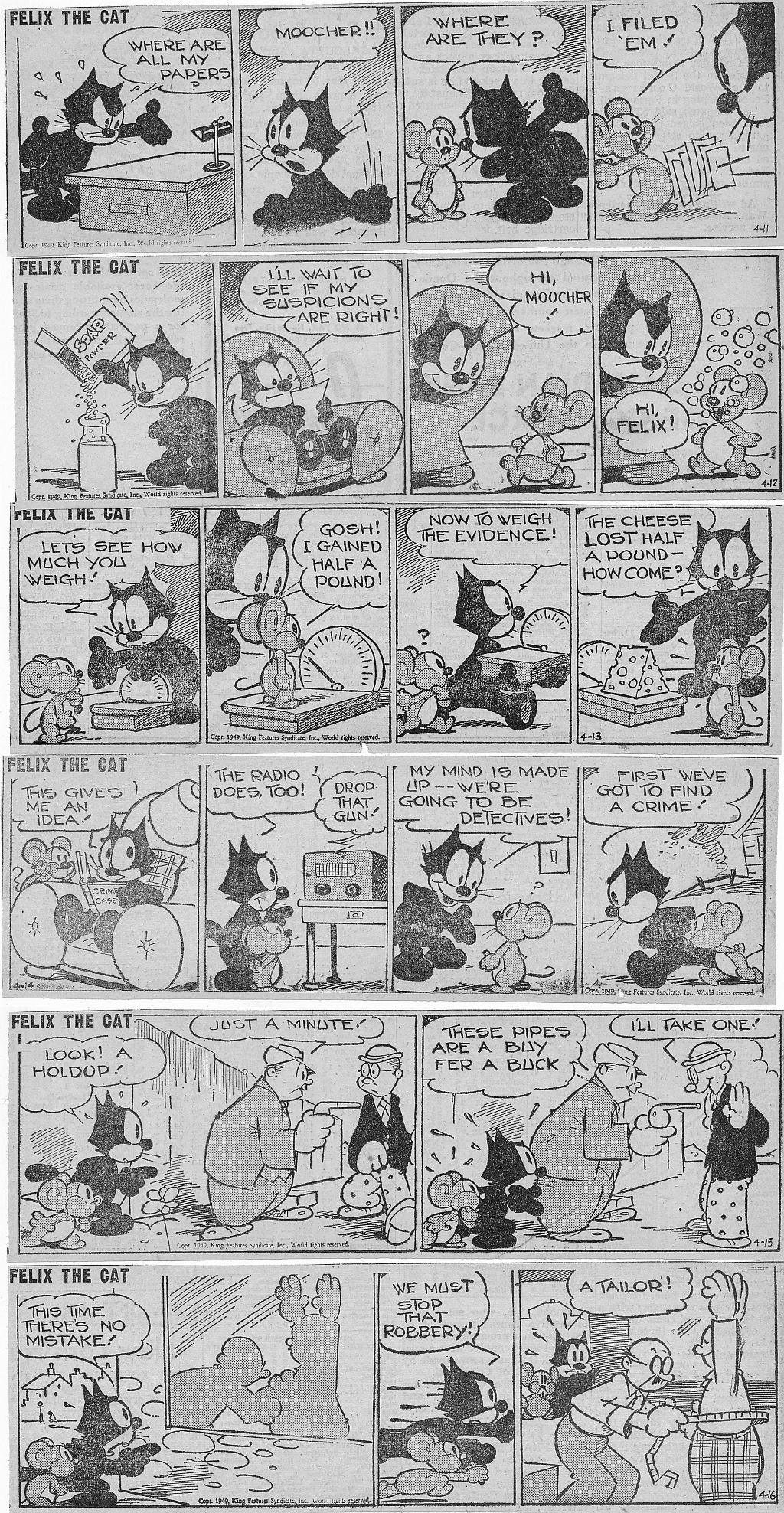 In anticipation of Yowp’s post next month, here are the Yogi Sundays from August, 1963, clipped from the St. Louis Post-Dispatch.Â  The 8-25 is my favorite of this batch, as Boo-Boo’s tooth is no match for the rear axle and differential of a full size Acme truck! Yowp will have the half-page versions of these strips coming soon. Give that old dog a visit. In the upcoming month, I will do a brief essay on retirement and other topics of interest to inveterate cartoonists.

Koko the Blue Review and Your Comics Page Too 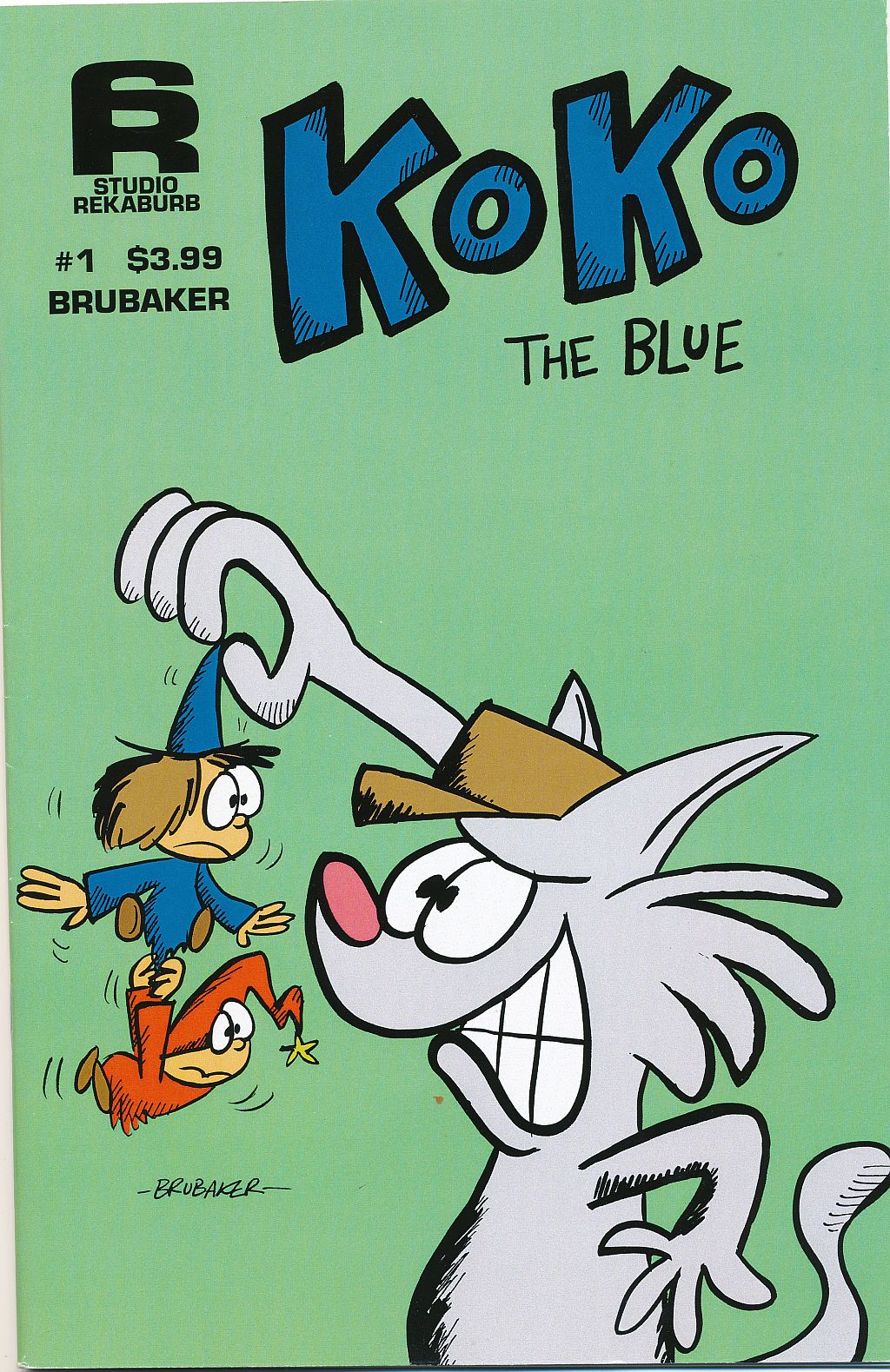 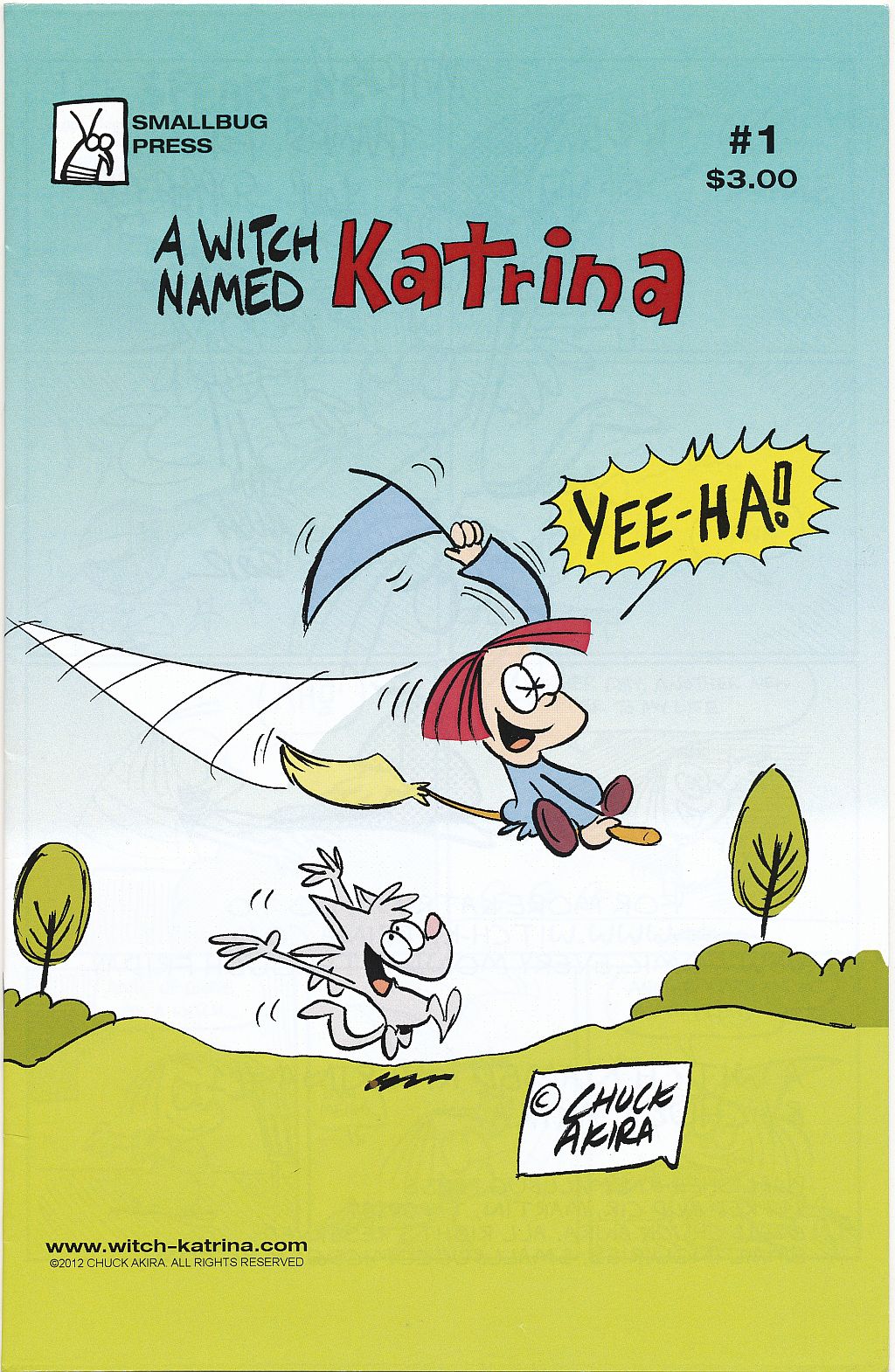 Here is a review of Charles Brubaker’s (aka Chuck Akira) new comic book “KoKo the Blue #1” and the earlierÂ “A Witch Named Katrina #1”. Charles began doing comic book stories with his little girl witch character KoKo (originally called Katrina), in 2012. He has a professional looking style for a relatively new cartoonist, and he has a lot of imagination he’s brought to his tales.Â  Being raised in both Japan and the USA, Charles has a Japanese and American bent to his comic narratives. That’s why when KoKo and TofuÂ  (her cat familiar and boss) are asleep, “snooze bubbles” emerge from their noses, and iconography that such Japanese comic artists as Osamu Tezuka used in his epic Manga series “Hinotori”, the Phoenix bird, form the lexus of the main story in KoKo the Blue #1: “a Witch-Hunting We Will Go.” The Phoenix is a sacred bird in Egyptian religion–once every 500 years the Phoenix sets fire to itself, to be reborn as a new Phoenix. In Chinese mythology, the Phoenix is a symbol of longevity. Since Chinese culture informs much of Japanese culture, the PhoenixÂ  is well known there. The Egyptian legend says that only one Phoenix at a time can be on the earth. In KoKo the Blue, there are a least two Phoenix nesting in the Brimson Forest. KoKo and her brother Jodo are sent to Brimson Forest to find Dangan Bullets (also Japanese cultural stuff), which turn out to beÂ magic bullets that poachers hunt PhoenixÂ with. Of course the subtext here is that the poachers who drink the Phoenix blood will have a very long life, a theme Tezuka used in Hinotori.

Charles’s American side emerges in funny poses and action situations as shown here on page seven from KoKo the Blue.

The multiple poses in panel 4 have a comic spirit of action as KoKo and Jodo make a crash landing in the forest. Charles is an aspiring animator, as you can sense from the multiple poses in this panel. The ending of the story has an American animated cartoon feel to it, as KoKo and Jodo rebel against their boss, Tofu the Cat, and chase him through Brimson Forest, shooting magic rays at him from KoKo’sÂ magic wand. I also like the use of color in KoKo the Blue, the color helps completeÂ the shapes in the characters, making them pleasing to look at.

Â Â Â  My favorite of Charles’s “Girl Witch” stories is “The Speakeasy Potion ” from “A Witch Called Katrina” (Koko’s original name), in which she invents a potion to enableÂ inanimate objects toÂ speak. The potion accidentally gets spilled on the floor in KoKo’s house, and the floor comes to life! There’s something very L.Â Frank Baum about this premise that really appeals to me. (Mombie the Witch sprinkling Jack Pumpkinhead with the “Magical Powder of Life” in “The Land of Oz” is brought to mind).

Â Â  Charles is still a young man, and works very hard on his tales of KoKo. So we have more stories to look forward to. There will be another issue out in August, so watch for it! Support an aspiring cartoonist and animator with a rich imagination. It’s tough out there for comic book independents, especially independent humorous books, to gain a foothold.Â Even Robert Crumb seems to have disappeared from the indy comic book scene.Â Order from Rekaburb, 247Â Red Bud Circle, Martin Tennessee, 38237. You can see the prices on the covers reproduced at the start of thisÂ post. 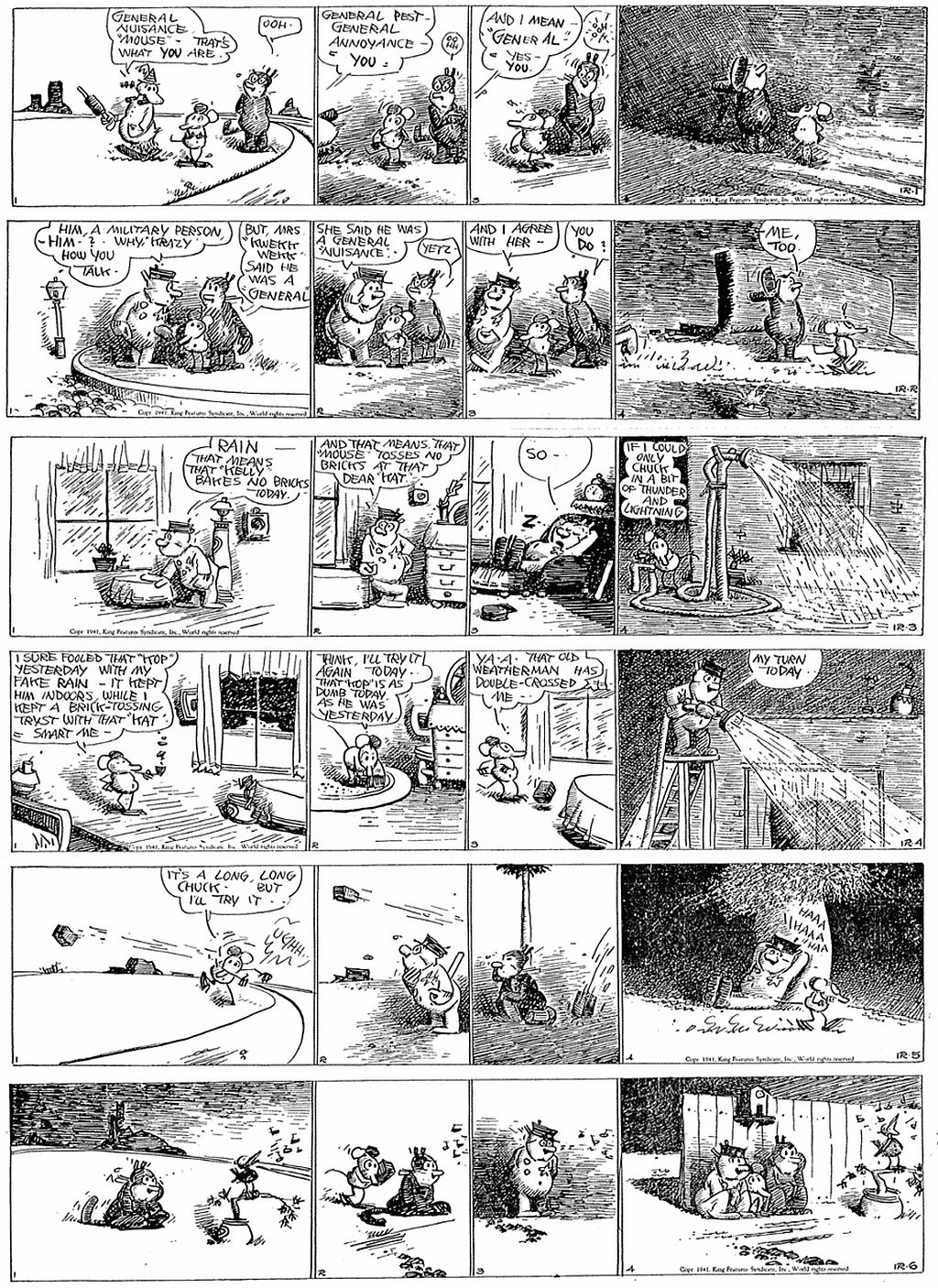 Â Â Â Krazy is from 12-1 to 12-6-1941 this time.Â Mrs. Kwakk-WakkÂ declares Ignatz to be a “General Nuisance” in the 12-1 and Krazy’s logicÂ makes him think thatÂ the Mice is in the military. In the 12-3 and 12-4 strips, Ignatz and Pupp take turns faking each other out withÂ a hose outside the window gag, producing fake rain.

Â Myrtle, from 8-25 to 8-30-1947, has a whole week of Coo Coo clock gags. Freddy has to baby-sit the Smaltz’s Coo-Coo clock while they are away. In the 8-27, Bingo is jealous of the Coo-Coo’s door-opening ability, and goes into competition in the old fashioned hutch. Fisher’s whimsy gets a work out in the 8-30, as the Coo Coo sits on a nest and hatches three little Coo Coo’s, each with it’s own miniature clock! 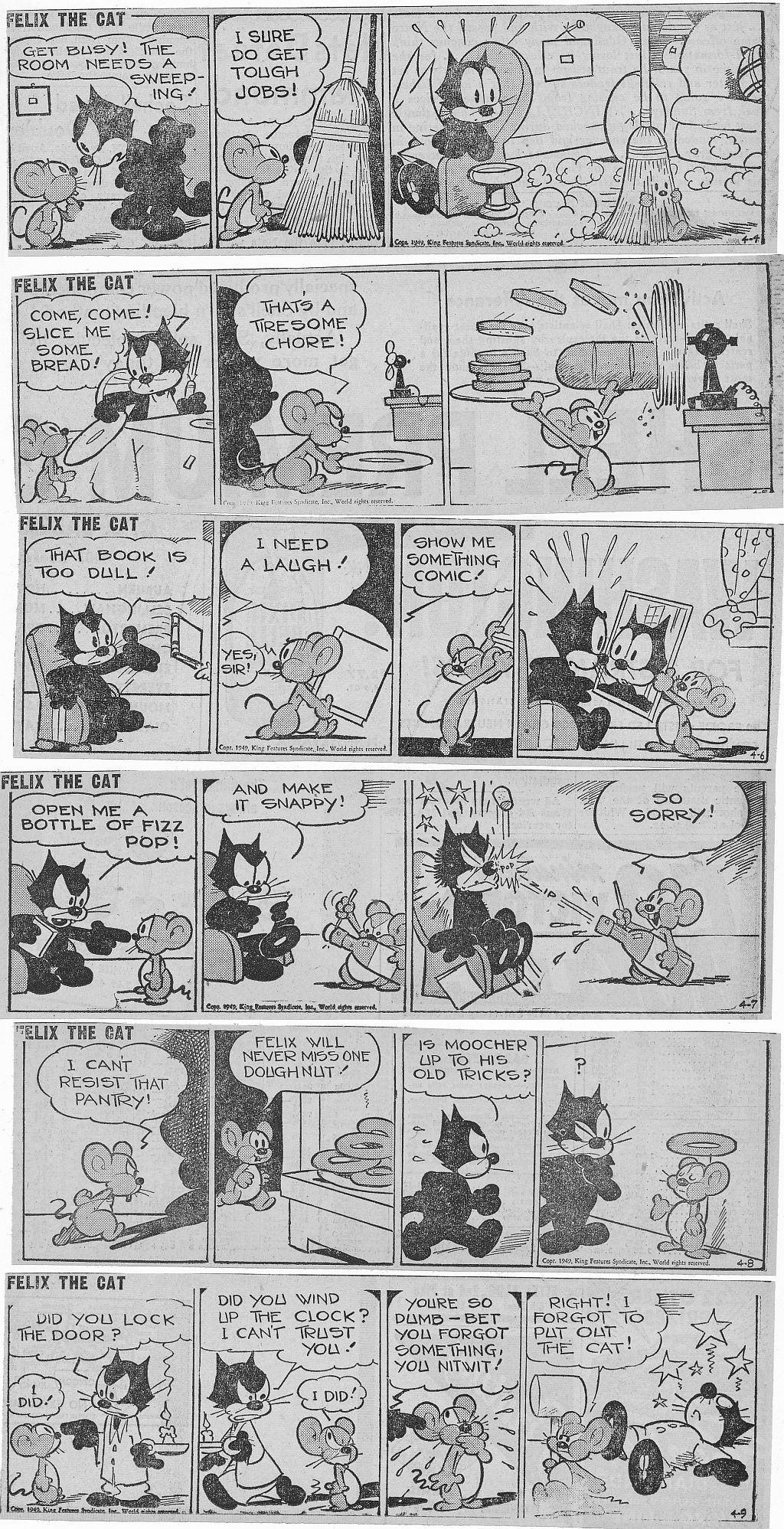 Â Felix, from 4-2 to 4-9-1949 goes through a whole week of humiliation at the hands of Moocher Mouse. Moocher holds a mirror up to Felix’s face when he longs to see “something comic” in the 4-6, Felix gets a soda pop stopper in the face in the 4-7 and in the 4-8, Moocher swipes a Tom and Jerry gag as he “puts out the cat” with a big mallet. It’s interesting how slim Felix looks in hisÂ pajamas! Enjoy the post, readers! 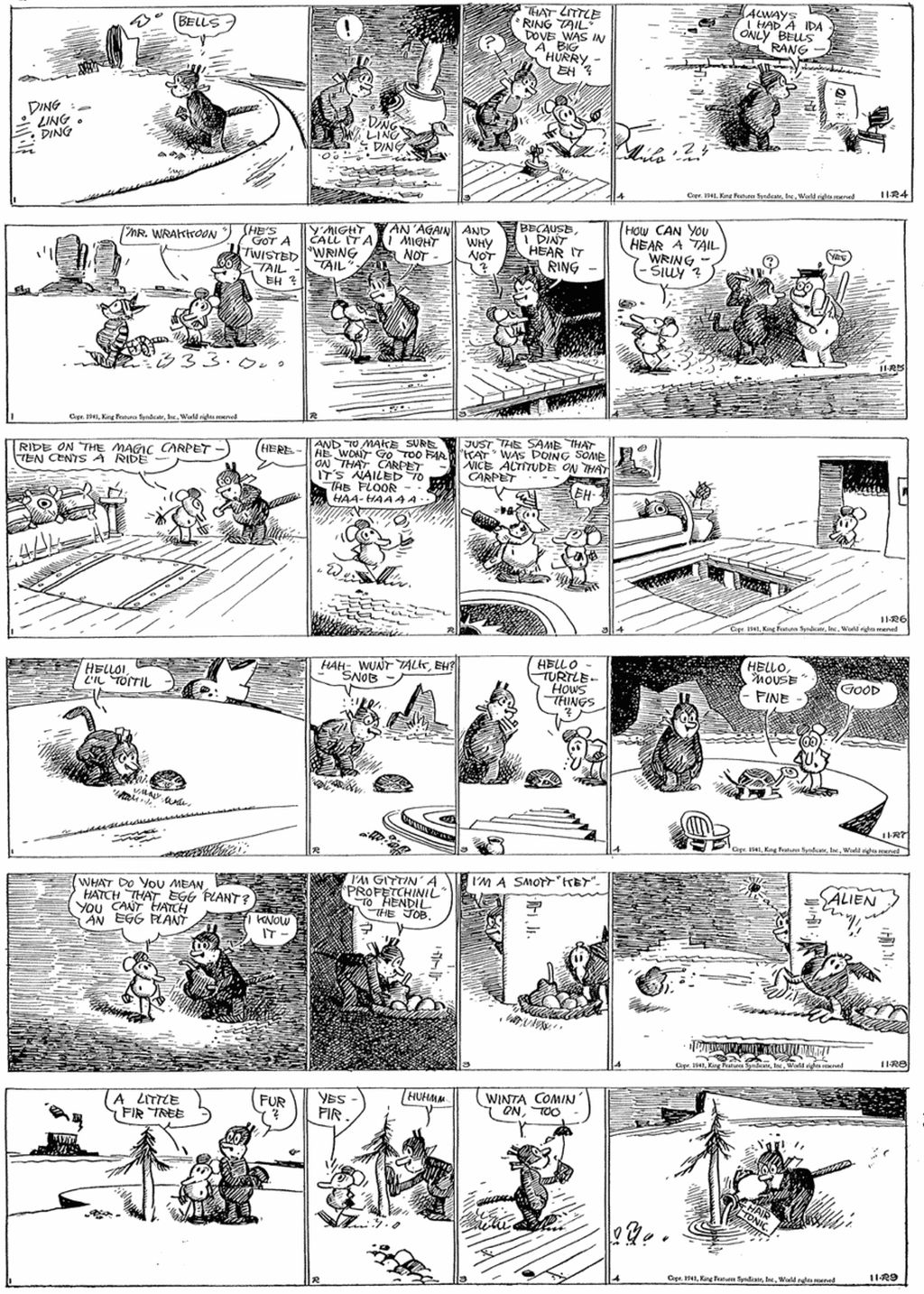 Â Folks, I’m very excited to announce that our new cartoon short, THERE MUST BE SOME OTHER CAT, had been accepted into competition at the Ottawa International Animation Festival in September! Out last short, “It’s ‘The Cat'”, was screened out of competish at the Ottawa Festival, but this time they’ve opened the doors to us fully. September looks to be a good month for Itza, we’ll keep you posted.

Krazy is from 11-24 to 11-30-1941 this time. Loaded with visual and aural puns, Krazy tackles “Belles”, “Eggplents”, “Megic Coppets” and “Fur Trees” among other outlandish extensions of reason, all or most taking place on Herriman’s stage floorboards. Garge often thought of “Krazy Kat” as taking place on a little stage, you can see below the floorboards in the 11-26.

Â Myrtle from 8-18 to 8-23-47, tries out a little continuity as Myrtle spends the first three days training Bingo to be a racing dog, only to be bested by a cat. Myrtle is kissed by a fish in the 8-21, goes on a handlebar date with Snoggons in the 8-22 and in the 8-23, we see a good example of Fisher’s panel gag timing between the third and fourth panel as Myrtle decides not to tell her Pop about the price of lampshades. 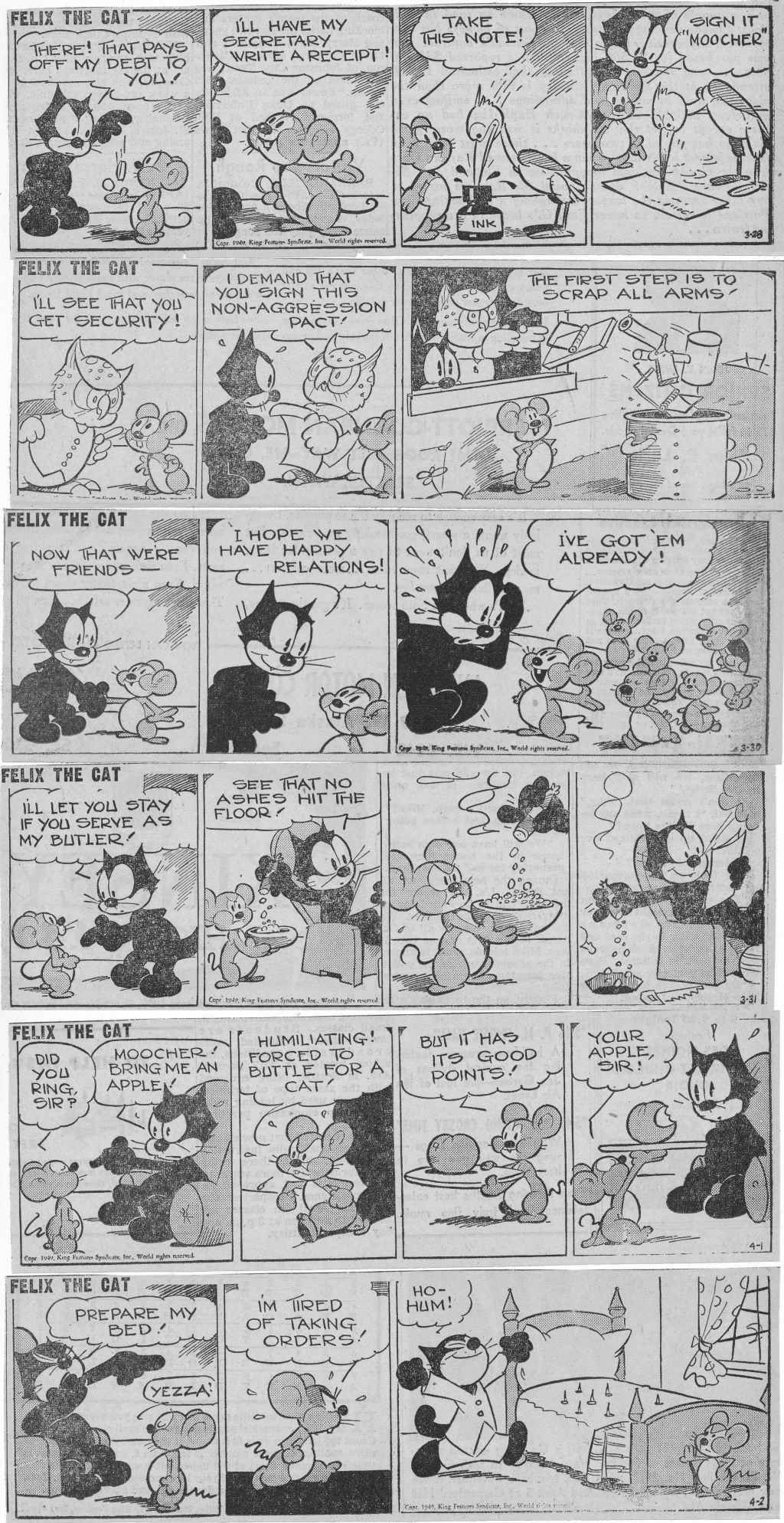 Â In Felix, from 3-28 to 4-2-1949, Felix has to pay off his debt to Moocher Mouse, then in the 3-31, Moocher reverts to being Felix’s butler. It only takes two days for Moocher to rebel against buttling, and puts tacks in Felix’s bed in the 4-2. As David Gerstein suggested, this type of back and forth between Felix and Moocher suggests Tom and Jerry type conflict, which was at it’s height in 1949 in movie theaters.

Â Here’s Yogi Bear from July, 1963. I’m missing July 14th, because I pasted over it in a comic scrapbook I was keeping back in ’63. If I’d had more foresight at the time, I would have kept the entire Sunday Comics supplement, but instead, foolishly spent a lot of time carefully clipping my favorites. I almost didn’t find the 7-21 and 7-28 episodes, but they turned up on the backs of POGO, which I also saved from the St. Louis Post-Dispatch. I didn’t know who Harvey Eisenberg was in ’63, but I knew I liked his style. I loved the Tom and Jerry comic books he drew.Â Â He developed such a beautiful ink line, and his feel for forms in action was so appealing that when any other artist attempted to draw the Hanna-Barbera characters for print, they just didn’t look right to me. Joe Barbera had great respect for Harvey’s drawing, and went into business with him to produce the “Red Rabbit” and “Foxy Fagan” comic books for Dearfield Comics in 1947, without MGM’s participation. To see the full versions in black and white, including the missing 7-14 strip, go here: http://yowpyowp.blogspot.com/2013/07/yogi-bear-weekend-comics-july-1963.htmlÂ over to Yowp’s blog and take a look.

I’ve had a lot of computer problems lately, I have an “old” OS, Windows XP, which is being orphaned by Microsoft at a swift clip, already YouTube and Daily Ink don’t work well with it. I upgraded the browser to IE 8, and then was forced to upgrade to the latest version of Yahoo mail, and that little click disabled my computer so that I couldn’t upload or download any pictures. This effectively derailed my blog for quite a few weeks. Thanks to brother-in-law Roger, who is a retired Physics professor and computer genius, all is now fixed up. I’m happy to be back again, see you soon, unless Microsoft has some more “upgrades” lurking in the background.