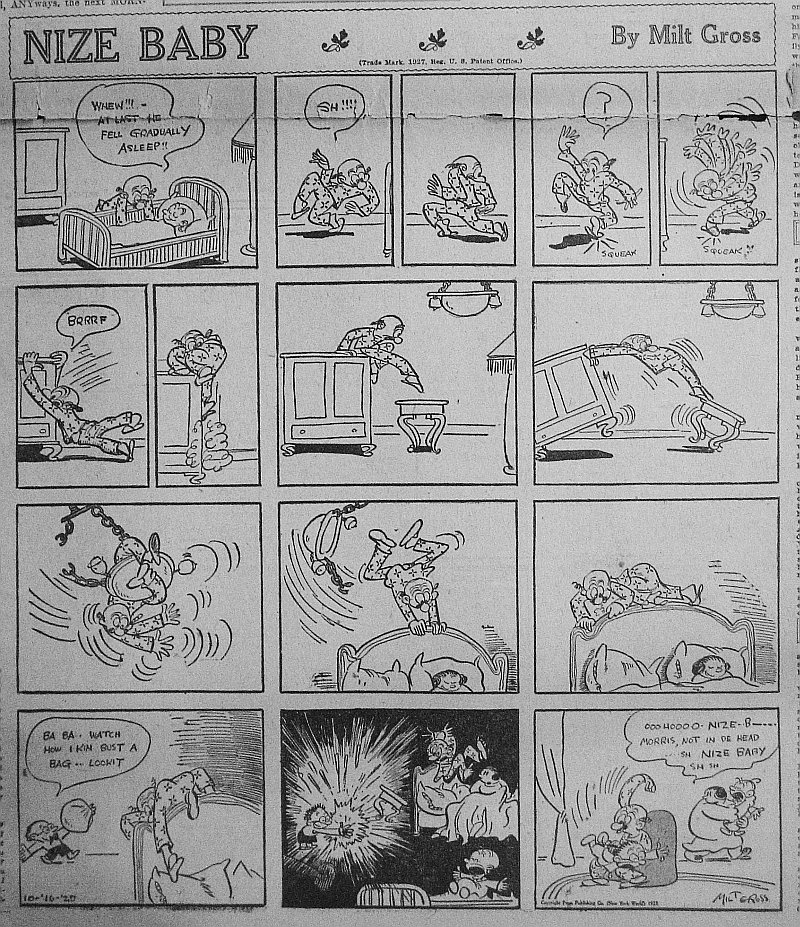 It looks like Isidore is up to no good in NIZE BABY from 10/16/1927.Â  Again, Milt Gross the wanna-be animator comes to the fore as “Baba” struggles manfully to keep from waking up the baby.Â Gross uses speed lines galore and some really tortured anatomy to show Papa’s extreme caution. I love the dialog in the last panel, “Morris, not in the head…”

Krazy Kat (11/6/1939 to 11/11) is mostly visual gags about a “Road Closed” sign, with Krazy, Ignatz and Pupp mixing it up along the route. Garge evidently ran out of Road gags about Friday, so brings in Joe Stork to wind up the week. Krazy, Ignatz and Pupp run away from the stork when they suspect that he carries an infant. Ignatz has the most right to run off, he already has three kids!

Marvelous Mike (6/17/1957 to 6/22) continues the “Puttin’ Mike” storyline as Crump gears up for the big match against Smith. Smith has agreed to let Mike hit Crump’s putt shots for him, but first Cliff has to get a ball on the green and in the 6/22 he makes a real duffer shot into the rough. We’ll see if he can recover the match next time.

Â Felix the Cat (5/25/1936Â  to 5/29) continues Felix’s adventures in the Dooit home. I love the visual pun of Snobb’s dropping his “H’s” on Felix’s tail in the 5/27 episode. Uncle Minus figures quite a bit in these strips as well. Otto Messmer gets a lot of comedy mileage out of Snobb’s easily offended aristocratic attitude. The run of Felix dailies I am using has quite a lot of missing episodes, like 5/30/1936 this time, which was a Saturday. These are rare, so I’ll keep running what I can find. Does anyone know if Dell’s “Popular Comics” from the 1940s ever ran these Felix dailies?

Look out in stores or on Amazon for “The Toon Treasury of Classic Children’s Comics”, edited by Art Spiegelman and Francoise Mouly, published by Abrams ComicArts, New York. Mike Barrier and Kim Deitch were both advisers on the book, which is a collection of comic book stories from the 1940s and 1950s aimed at children. Of course at $40.00 a copy, I doubt if many children today will be buying this one. Hopefully their local libraries will carry it. It’s a nice selection of stories by Barks, Kelly, Carlson, Davis, Mayer and many more. The reason I have the book is, Francoise Mouly borrowed my copy of “Laffy-Daffy Comics #1” at Mike Barrier’s suggestion (Thanks, Mike!). They used one page from it, “Droopy (not Avery’s) in ‘Snow Day'” by Dan Gordon. Look for it on page 206, an eerie little story. The reproduction in the book is good, not too fussed over or “restored” looking, I like my comic book reprints looking a bit yellowed with out-of-register color, and that’s what you will get here. Of course for your $40.00, you now have these comic pages on much better paper with much less acid. I don’t think we’ll ever see such a rich legacy of so-called “children’s” comic book stories ever again. These days, it’s “Super-Heroes” or die! This old kid will really enjoy this book, that’s certain.

The Cat’s Out! Scanner Log-Jam Broken! 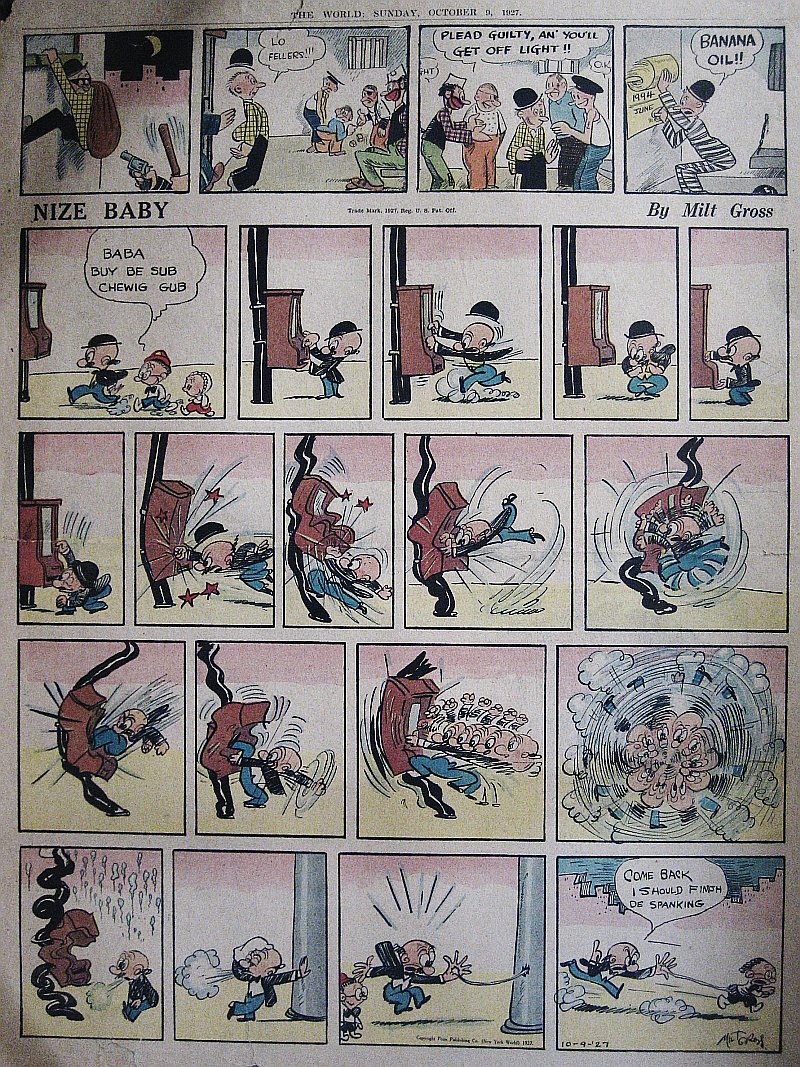 Hi again, Folks! I finally managed to scan some Felix The Cat dailies from 1936, the first three will be in this post. We lead off with an episode of Nize Baby, in color this time, from 10/9/1927.Â  In the “Banana Oil” topper, the convict doesn’t get out until 1994, really puts the Gross era into time perspective. This episode has even more animation than some of the previous strips I’ve posted. The drawings of Papa wrestling with the gum machine “scan” well, would look delightful animated. I love the payoff panel with Papa’sÂ  hand stuck to his son’s well-paddled rear end, no “time-outs” here!

Marvelous Mike is from 6/10/1957 to 6/15 this time. Mike astounds Cliff on the clubhouse green with his scientific putting. It looks like Mike is going to hit Cliff’s putts for him in the match with Mr. Smith, although Mike is developing some theories about mental application in golf that will bear watching!

Out first Felix dailies come from 5/20 to 5/22/1936. At this point in the continuity, Felix is a house pet of the Dooit family. His best friend in the family is the little boy, Danny Dooit, his worst enemy is Snobbs, the butler. Cousin Minus from Texas visits in the 5/21 strip, much to Snobbs’s disgust. Felix at times seems to be a minor character in his own strip! Felix constantly wins and loses, being thrown out and sneaking back in the house again. 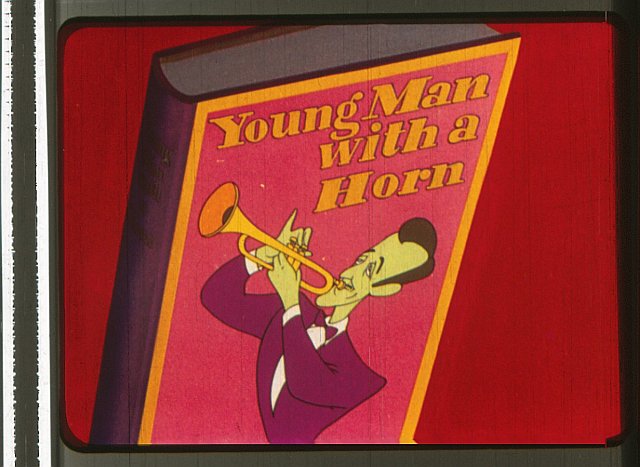 Wow, look what the scanner can do with 35mm Technicolor frames! This is a frame from Bob Clampett’s “Book Revue”, Harry James on trumpet. I even “tricked” the scanner into doing some 16mm frame enlargements that look quite nice, almost like projected film. I’ll sprinkle them into the mix here from time to time, just to keep the animated cartoons from fading out of the blog. Remember to click on the small images to see them larger. Did ya know that this little blog is among the TOP 16 Comic Scannin’ Blogs according to the STWALLSKULL blog list which reviews comic sites! Check it out at www.stwallskull.com/blog. It’s humbling to be singled out like that, I hope whatever readers I have will keep coming back. 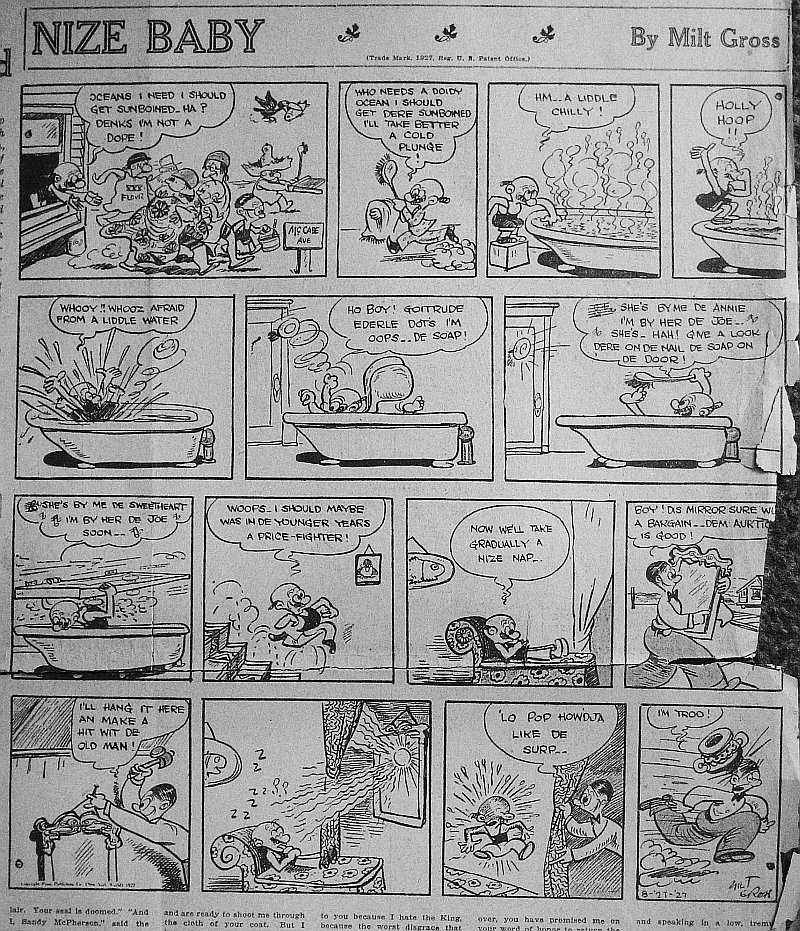 Hi Folks, this is NIZE BABY from 8/21/27.Â  Looey just can’t please Papa with his present of a mirror won at auction. “Gertrude Ederle” whom Papa refers to when he’s in the tub, was big news in 1926. She was the first woman to swim the English Channel and was known as “Queen of the Waves”.Â  She lived quite a long time, dying in 2003 at the age of 98. Completely deaf in her later years, she taught deaf children how to swim. Please excuse some of the missing chunks from Nize Baby this time, the original was very brittle and had to be pieced together on the basement floor for it’s appearance here.

Krazy Kat from 10/23/1939 to 10/28 is about throwing curves. Not with a baseball, but with bricks and bats. Offissa Pupp unwittingly beans Krazy with a brick, and in the 10/28 strip, humors Krazy by letting him toss a brick. I love the last panel as Pupp runs through a Herriman forest of trees, dodging the brick as it makes it’s circuitous route through the thick trunks.

Marvelous Mike this time is from 6/3/1957 to 6/8. The storyline is beginning to feel a bit like AMC’s “Mad Men” series, as Cliff Crump is matched in a golf game with Bill Smith, of a rival ad agency. Mr. Kimball gives orders to Cliff to “win that match or else”. Cliff’s weak spot is putting.Â Naturally, baby Mike is a whizz at putting, knocking 500 straight putts into a glass on the living room carpet! Can Mike do that on a green? Come back next time and find out! The sepia tint to the Mike episodes this week was accidentally mixed into my resizing and enhancing efforts from the original microfilm print-outs. It makes the strip look a bit more antique, but, it’s readable.