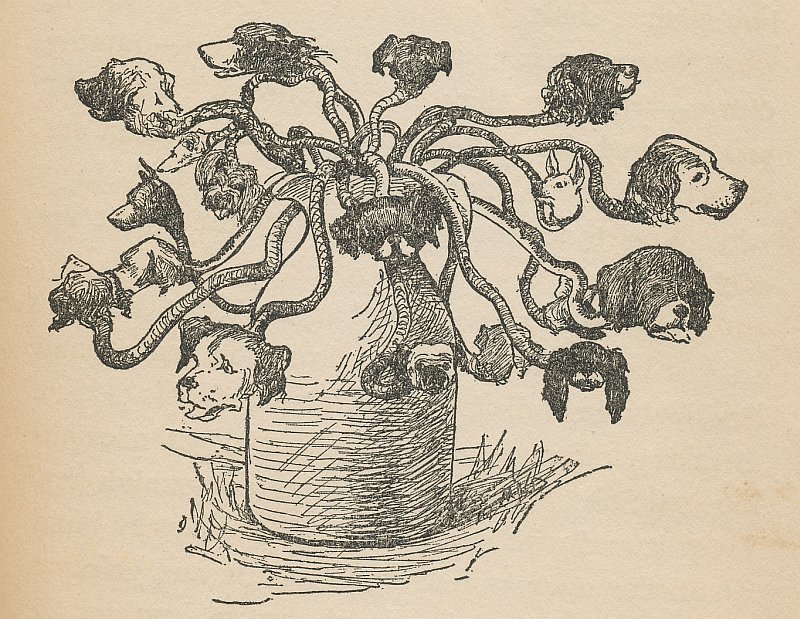 Hi Folks, here is my story-telling effort for the month; “The Bosh-Bosh Oil” by Alicia Aspinwall. The strange drawing above is an original illustration for the story by Marie L. Danforth. Â It was originally printed in 1896; collected in the anthology “Short Stories for Short People”. I read “Tulla Oolah” from that book before, now here’s another of my favorite tales. It must be one of the first stories I can remember being read aloud by our wonderful librarian at Bristol School, Miss Bedell. She always read everything with great dignity and a serious air that keptÂ all us first-gradersÂ in rapt attention. I have a little more relaxed attitude toward the story and characters, corning it up a bit. Give it a listen while you go about your internet business: www.zshare.net/audio/727905061e166b03/

Felix is from 9/7 to 9/13/1936 this time. The Messmer elephant adopts Felix and is so grateful to him for kicking the mouse that he won’t leave Felix alone! In the Sunday, Snobbs gets arrested for impersonating an officer and Felix sleeps in Snobbs’s bed. 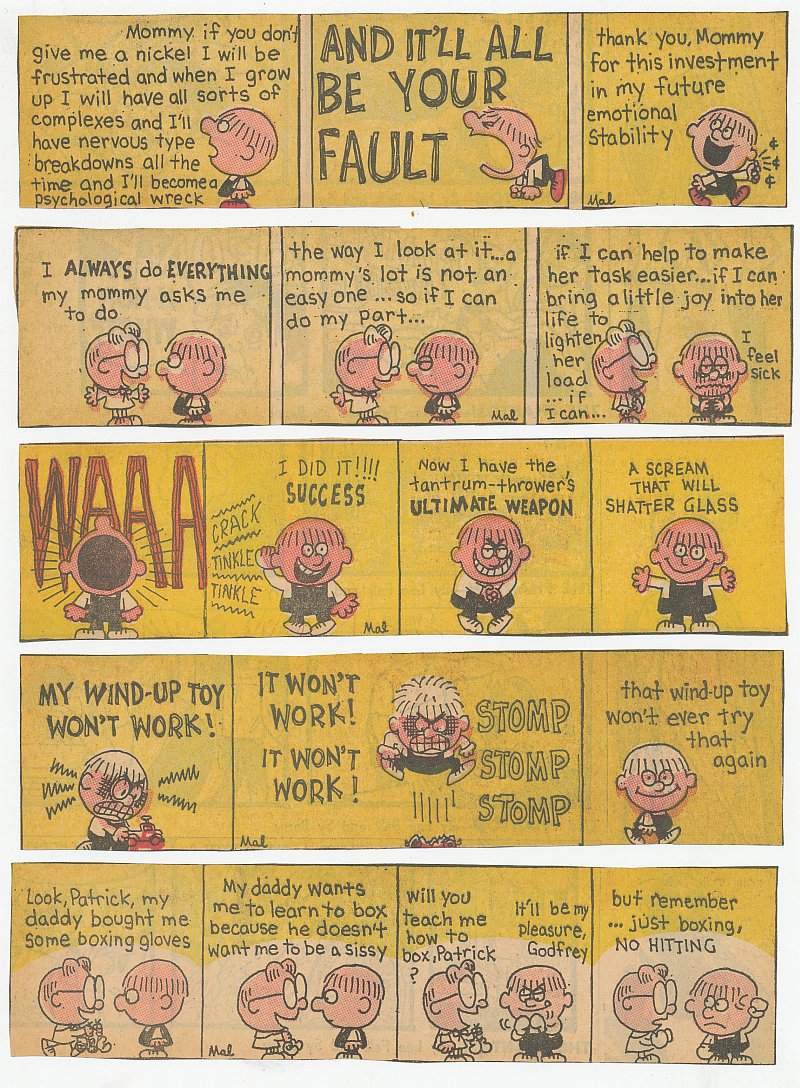 Patrick is from 11/29 to 12/3/1965 this time out. I love the intensity of feeling as Patrick jumps up and down on his wind-up toy and his Lucy-like joy in his “scream that will shatter glass”, without a “throat-mike” yet! The pose in the 11/29 strip as Patrick declares; “And It’ll All Be Your Fault” looks a little like a “Miss Peach” character, butÂ pushed to the brink. Have fun with the blog, and I’ll see you next time.

Hi Folks, thanks for coming back to the old blog. It seems that blogs are “out” and Twitter and Facebook are “in”. I read an article in the L.A. Times that says that only “old folks” use Blogs anymore. I tried Facebook and thought it nothing but a waste of time, I don’t even care to look at Twitter. If you want to comment you have only to click on the link, or email me at blogmolasses@att.netÂ if you don’t want the comments published. If that’s acting old, to want to avoid Facebook and Twitter, then I prefer the word “mature”. Here’s Felix from 8/31 to 9/6/1936. Great stuff with the animals, Socky and Snobbs in the woods this week, I especially love the Sunday page. I just can’t resist kittens! We also learn from the Sunday that Felix is a really valuable cat!

Krazy this time is from 2/19 to 2/24/1940 and has one storyline for the whole week. Offissa Pupp and Judge Pupp are one and the same person, and they work separately, but in concert to arrest and try Ignatz for brick-tossing. I like all the mice “like-alooks” in the jury box in the 2/20 strip. 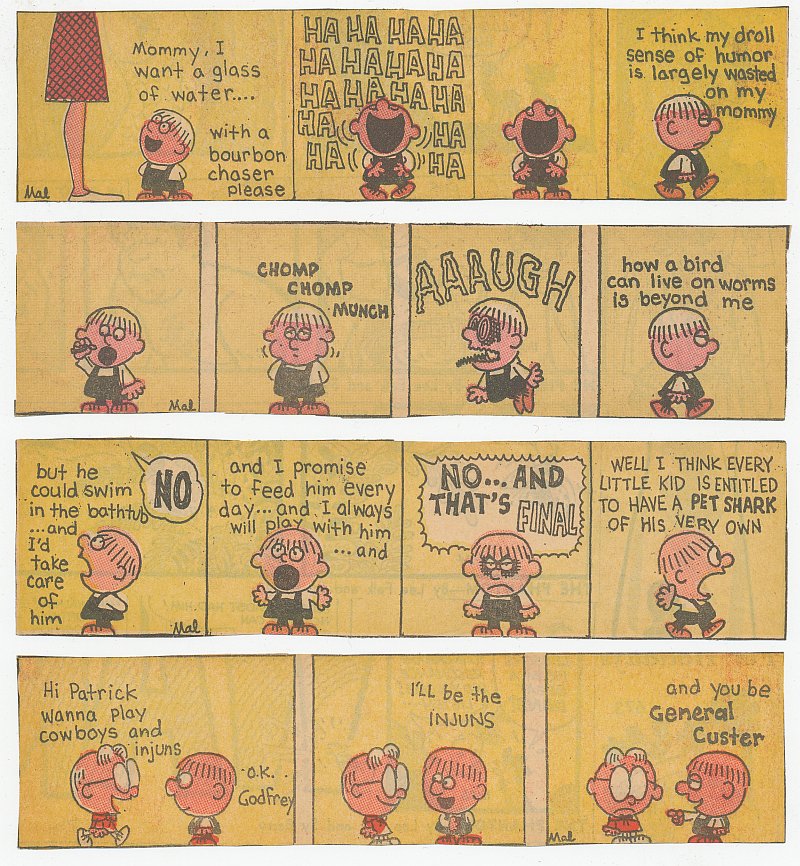 Patrick is from 11/22 to 11/26/1965 thisÂ time, with the Thanksgiving strip missing, as the Post-Dispatch did not print on holidays. I like the timing of the joke in the 11/22, as Patrick looks expectantly over at his mother (in the third panel)Â to see if she will respond favorably to his gibe. Mal Hancock even uses Schulz’s patentedÂ “AAAUGH” in the 11/23 strip. See you next time.

Please Bear With Me 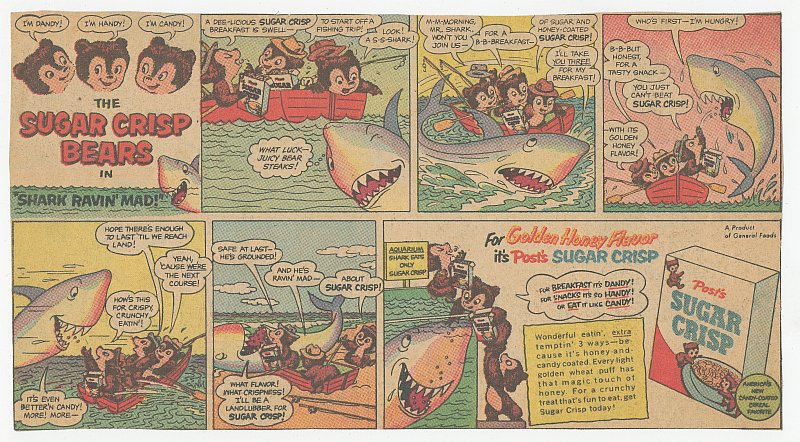 Here’s part two of my tribute to Dandy, Handy and Candy, the original Sugar Crisp Bears. Read about their escape from a shark, many years before “Jaws”, and then listen to this old children’s record about the bears. See if you can guess who is the principal singer on the record: http://www.zshare.net/audio/72056233966bcdac/. The scratches, pops and ticks are from more than 50 years of well-loved play!

Felix this time is from 8/24 to 8/30/1936. It’s a spooky week in the forest for Danny and Felix as they encounter an elephant, a lion, a crocodile, a monkey and an ostrich, all beautifully designed by Otto Messmer. The Sunday features Snobbs in a big dog suit, as he once again becomes Felix’s enemy. Oh, what a short memory has Snobbs, and how ungrateful he is for past favors!

In the Kat this time, (from 2/12 t0 2/17/1940)Â Offissa Pupp just can’t win. First he is continuously fooled by the ruse of storing bricks in Ignatz’s big Beaver hat, then, even Joe Stork is in league with Ignatz as he smuggles in a brick hidden in his “bindle” (2-17). 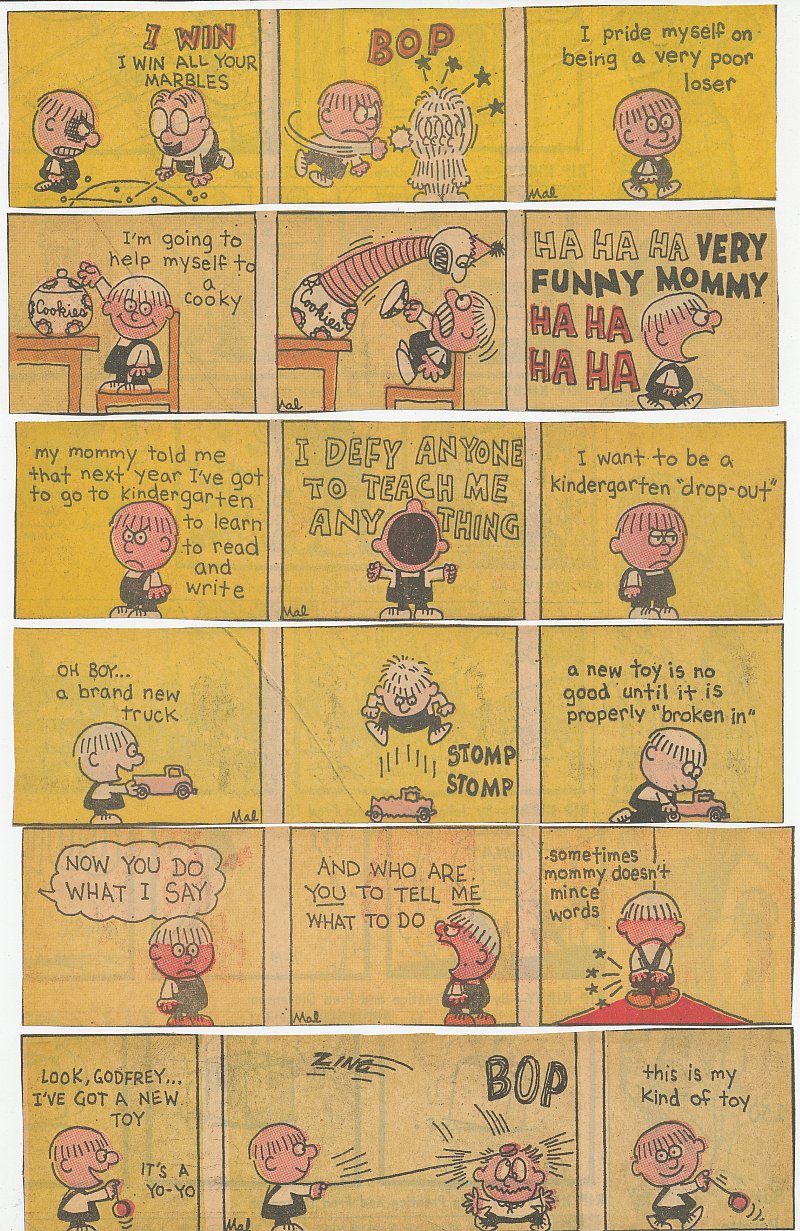 Notice the link over to “Yowp” over to the right. Click on it, and visitÂ a great blog devoted toÂ  pre-Iwao Hanna-Barbera cartoons, when the world was safe for the silly puns of Charlie Shows, and the designs of Ed Benedict and Dick Bickenbach, not to mention the animation of Ken Muse, Carlo Vinci, Ed Love, Lewis MarshallÂ and many others. Yowp writes in a very entertaining and non-worshipful fashion about these cartoons. He likes some of them and is dismissive of others, but it’s heartening to read his analysis of the stories and the tricksÂ that the animators used to liven up the limited animation of the late 1950s and early 1960s. He singles out Carlo Vinci for the extra effort he put into making funny extremes, for instance. Yowp also points out how powerful a two drawing cycle or just a “pop” to a strong pose can be in limited animation. It was Ward Kimball who once defined animation as “the difference between two drawings”, and there are numerous examples of the power of two drawings on Yowp’s blog.

The best part of Yowp’s blog is his emphasis on the stock music that these cartoons drew on, and the stories behind the composers like Jack Schaindlin and Geordie Hormel. You can listen to the musical clips without effects or dialogue over them. Find the music that accompanied the Augie Doggie cartoons, by Bluestone, Cadkin and Phil Green;Â it’s quite appealing andÂ even moving.Â Â Of course, I think the theatrical cartoons of the 1930s and 1940s are the very best, but there is a dusty little corner of my heart and my brain where the early H-B Enterprises cartoons reside. Yogi Bear, Huck Hound and Quick Draw McGraw were like old friends to me, and the cozy, 1950s library music that Bill and Joe used for chases, like Jack Shaindlin’s “Toboggan Run” or “On The Run” played endlessly in my head as my brother and I rode our bikes fast through old St. Louis neighborhoods. These cartoons were on at a time of my life when I responded strongly to animated TV comedy, the watershed was Magilla Gorilla. When Magilla came on, I enjoyed them, but I knew that something was missing. Daws Butler was not the star voice anymore, for one, and the stock music that I loved was no longer there. I better quit blabbing about H-B stuff before Mike Barrier throws his computer at me, but I was a fan, so what.

Â Â Â Â Â  By the way, I wish Yowp could teach me how to embed sound files in this here WordPress type blog, then I wouldn’t have to use ZShare! Oh well, head on over there and tell Yowp that I sent you.