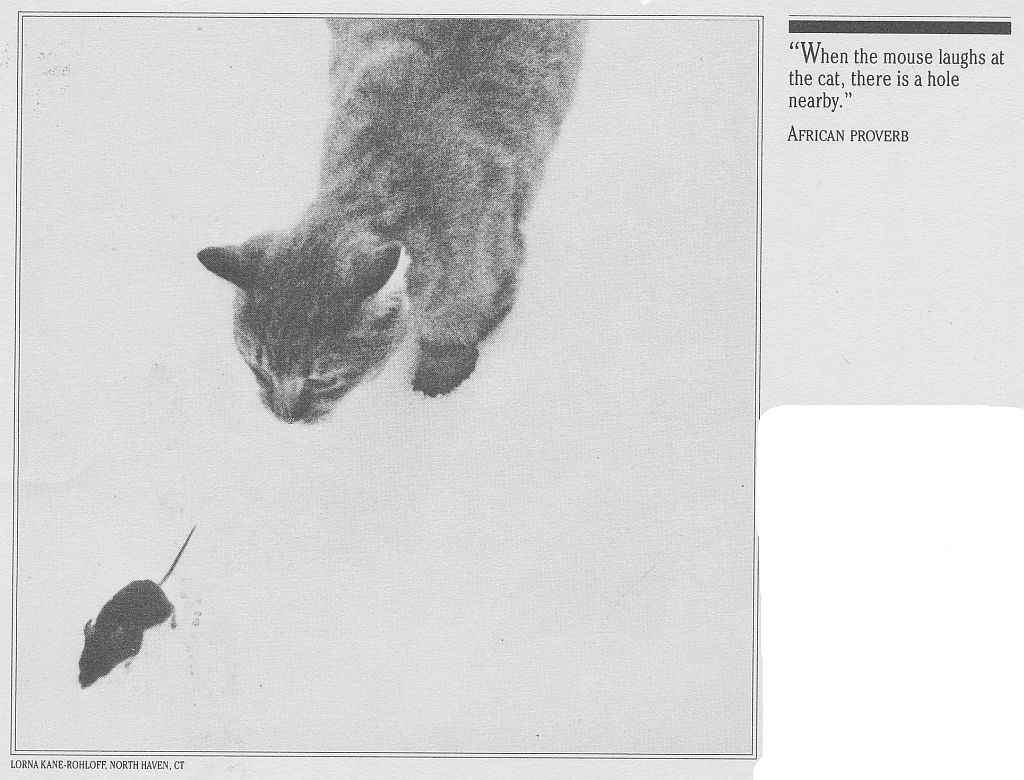 I’ve saved a lot of crazy cat pictures over the years, here’s one of my favorites. Reminds me of a real life Tom and Jerry or Ignatz and Krazy on the flip side.

Â Krazy from 8-31 to 9-5-42 displays theÂ incursion of the second World War into Garge’s Coconino County. In the 8-31, Krazy is singing “There’s Something About A Soldier” as Ignatz goes into the infantry as a Colonel. Offissa Pupp is an M.P. In the 9-5, a Dog who says he’s a General marches into the strip and says to Ignatz: “Hi Private, What’s Cooking?” The General seems to be Irish, since he has the craves for potatoes, and Ignatz makes a hasty retreat, having no potatoes cooking, or otherwise.

Â In Myrtle, 5-24 to 5-30-1948, Myrtle and Sampson put out their own typewritten newspaper, with an “e” missing. Slug, in the 5-27, submits a comic strip to the fledgling paper, but Myrtle,Â Sampson and BingoÂ reject it. I love the panel with Slug keeping his job as a soda jerk, looking at his strip: “I still think it’s good!” The Sunday from 5-30 has the whole family painting the house, Slug defiantly walks under the ladder and look what Hyacinth the cat pushes over!

Â Felix, 8-20 to 8-26-1934 has Felix trying to find a new “owner” as the crook he was bound to is now in the clink. He finds himself being given away to Miss Daisy Pipp, who is expecting flowers and instead receives a “common cat”. In the Sunday, Felix manages to get the whole battleship to himself as he plays around in the hold with explosives and the whole crew take to the lifeboats. We’ll see whether Felix blows himself up or becomes an Admiral! 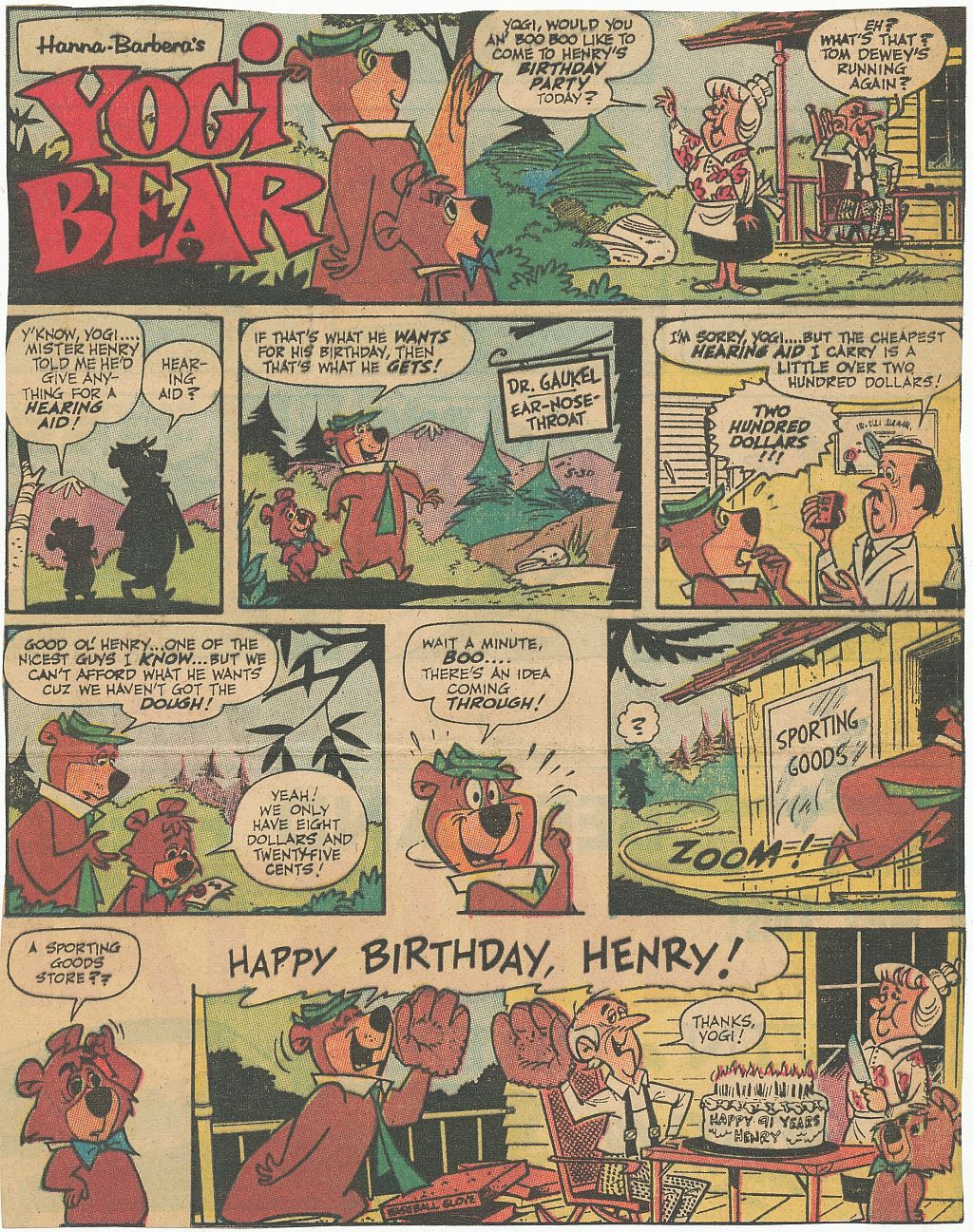 Â Here are the Yogi Bear Sundays from May, 1965. Harvey Eisenberg is still represented by the comics he left behind, and he managed to create quite a backlog of Yogi pages while he lived. My favorites here are the 5-16 (click to enlarge the thumbnails) in which Yogi leads his own humming group of hummingbirds. Harvey was very good at drawing realistic birds, his “Bertie Bird” text illos in many of the Tom and Jerry comic books attest to that. The hummingbirds he designed for this strip are very appealing. The 5-30 episode is a little bit puzzling to me, who’s Henry? He’s a bit hard of hearing, and celebrating his 91st birthday. Does this Henry have anything to do with Henry Orbit, from “The Jetsons”? Henry Orbit was an old-timer, and as I remember, a little hard of hearing. Maybe the Henry in this Yogi Bear page is the great-great-great grandfather of Henry Orbit? I know nozzink. Maybe Yowp can help with this H-B puzzler. So long for now. 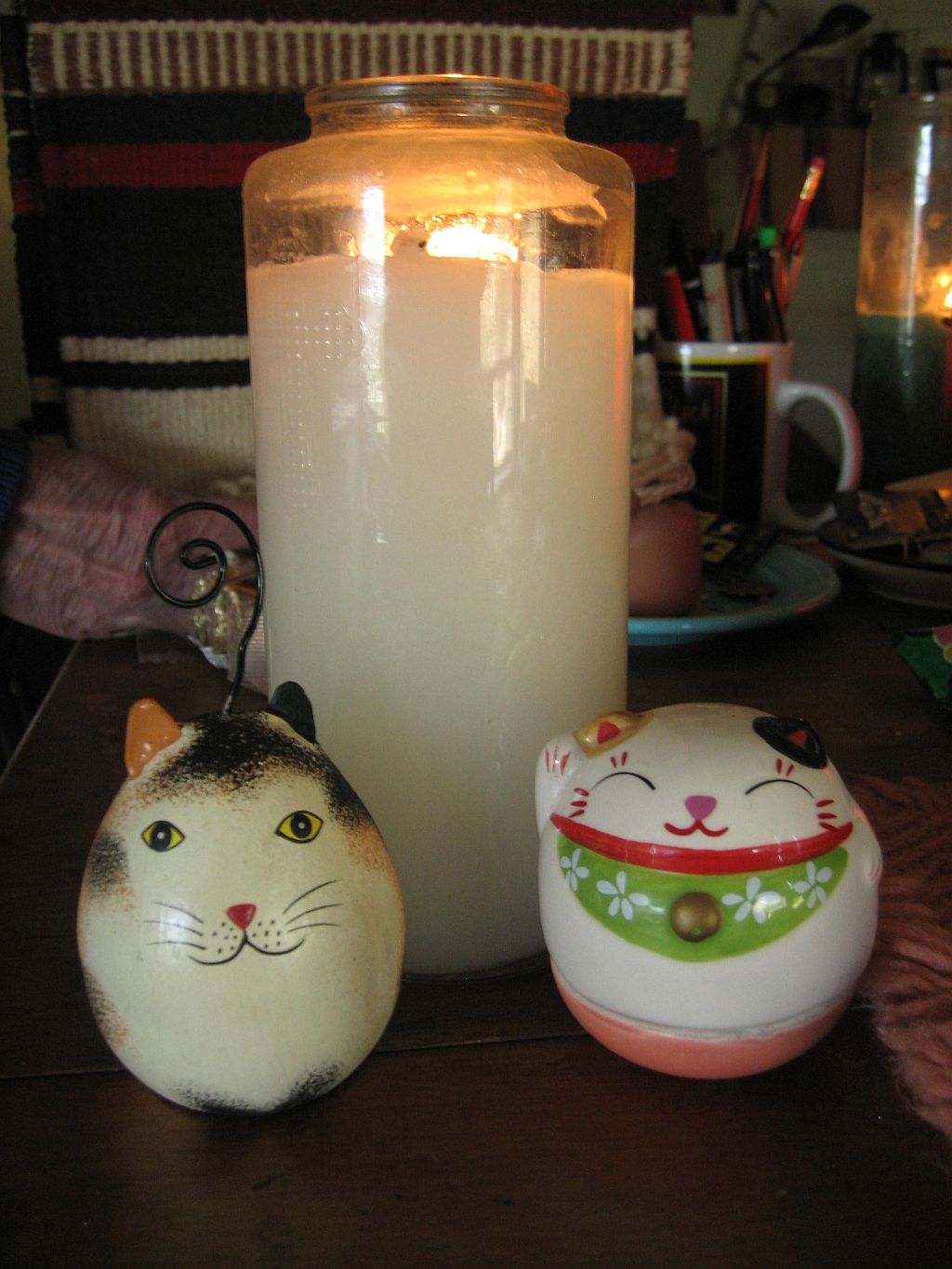 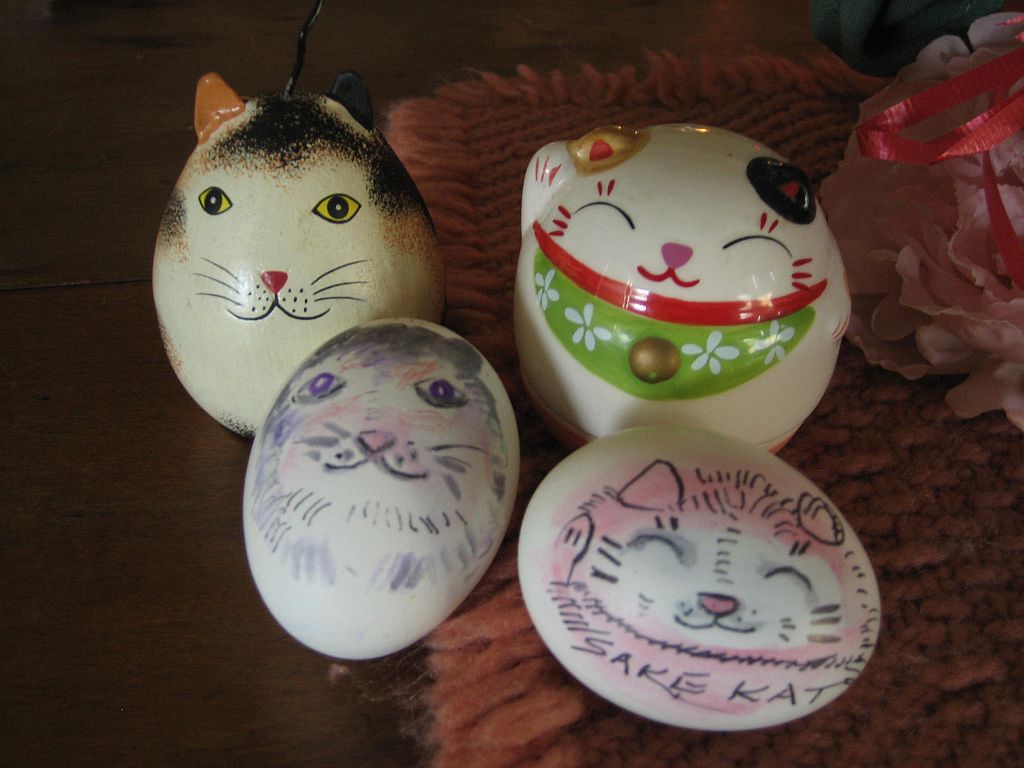 Â My dear wife, Cathy, makes up a little Easter basket and decorates eggs with her wonderful drawings each year. She found a little egg-shaped wooden cat head at a local store and re-created it’s face on one of the eggs. The other egg is a small Japanese ceramic cat she found in the same store which she named “Sake Cat”; this one was an Anniversary gift. Now they are both featured on Easter eggs. If you go to Itza Cat’s Facebook page: https://www.facebook.com/someothercat, you’ll see another one of Cathy’s Easter egg creations featuring Itza’s face.

Â Here’s a cozy shot of our Easter basket, made up by Cathy. In it, you’ll see a dark chocolate bunny, a couple of Cadbury Caramel eggs (my favorite), a jar of apple butter and some cloth roses. We’re still sampling the delicacies, well into April. I gave Cathy a special card and about 10 pink roses, so it wasn’t an entirely one-sided Easter. It was a happy, peaceful and memorable one.

Â Felix, from 8-13 to 8-19-1934, at last foils the robber who has been in a black-face disguise to fool the police.Â The disguiseÂ works until a stray bullet punctures a water pipe and washes off the burnt cork. In the Sunday, Felix tightrope-walks over to an immense battle ship and locks the Admiral in his cabin with the whole crew standing at attention. The crafty cat then proceeds to eat his dinner in the Officer’s Mess. The “Funny Films” topper features a black artful dodger, if you put the toy together you can see him dodge the baseballs that Felix throws at his head. If you want to see Popeye throwing balls at another black dodger, just find the first Fleischer Popeye cartoon (actually a Betty Boop) called: “Popeye the Sailor”.

Here’s Myrtle from 5-17 to 5-23-1948. My favorites this week? The 5-18, one of those “makes you think” gags, where Myrtle is wearing her pajamas underneath her skirt as she writes on the blackboard, and the 5-21, a Fisher Fantasy touch as the vacuum cleaner sucks up a cookie crumb and burps, sending Myrtle to the corner. I also found the Sunday page called “Another New House” where the whole neighborhood has fun with a steam-shovel, including Hyacinth the cat!

Here’s Krazy, from 8-24 to 8-29-1942. The first three strips feature the infrequently featured character, Mr. Bum Bill Bee. In the 8-27, Krazy seems to be suggesting the “heavy light” of Neutron Stars, or is he just being silly? The 8-29 strip doesn’t register with me, I can’t remember the “old watermelon gag” that Offissa Pupp is referring to. Does Ignatz usually hide inside a watermelon each year? Maybe one of my readers can help crack this Kat puzzler. UPDATE: The mighty Pat Ventura, cartoonist extraordinaire has shed light on this Kat puzzler. Here:

Â is the Sunday page from 7-11-1927 in which Ignatz not only hides in a watermelon, but goes over a waterfall in it. Look at the comments below to find out more about this page. If the Kats will stay out of the Korn field, I should be back before the end of the month with another post filled with comics, including the next batch of Yogi Bear Sundays. Remember to click on any image to enlarge it.