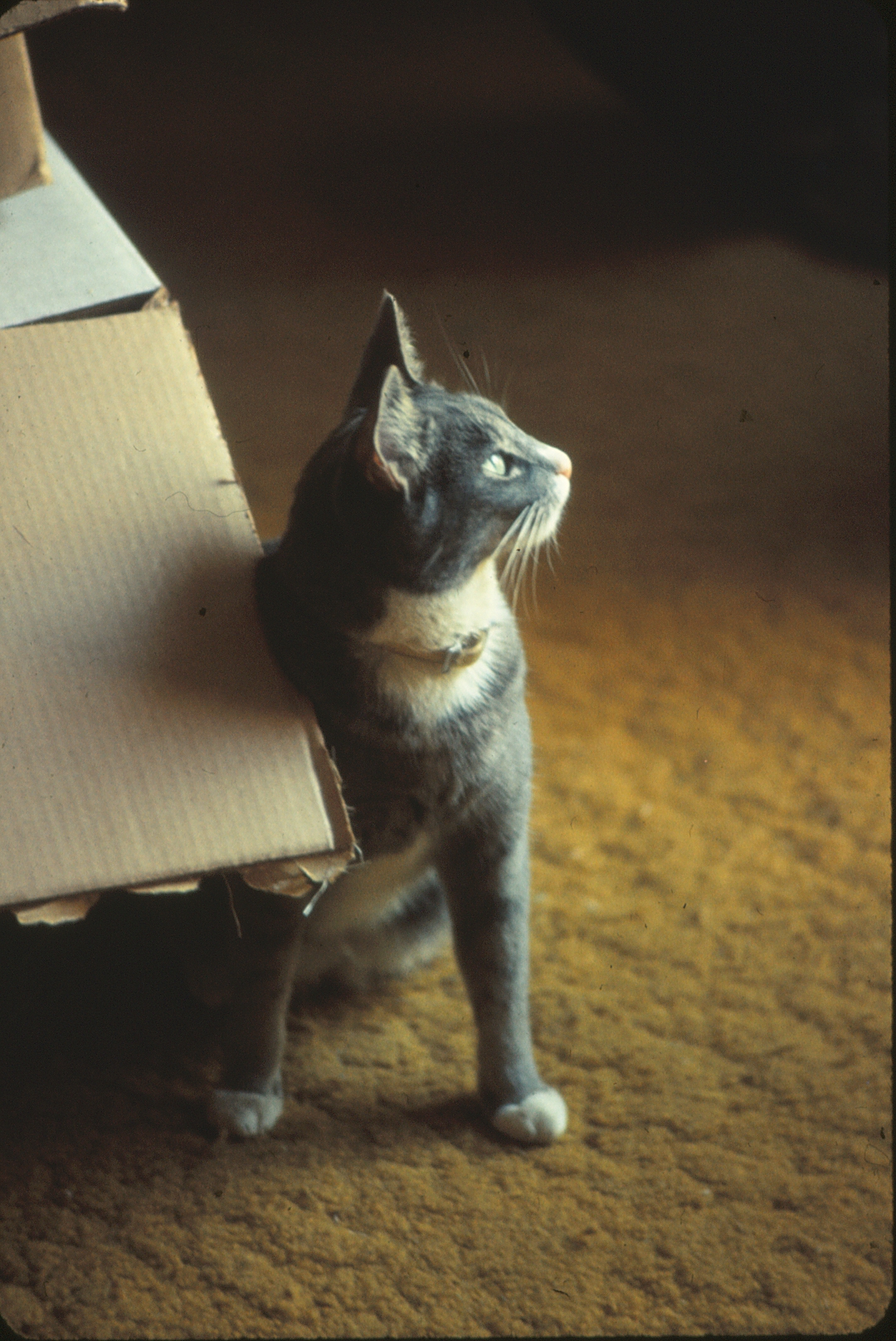 Â Here’s the third cat that ever lived with me, Stephanie, posing by a boxful of 16mm film, sometime in the early 1970s. Stephanie was loyal, sweet, long-suffering and a true friend. She came to me as a kitten, given to me by my old friend Mike Sanger. She was named after our favorite waitress at the old Van de Kamp’s coffee shop over on Fletcher Drive. Stephanie the waitress served us our morning coffee and bear claws several times a week, as Mike and I spun tales and built animated air castles. Stephanie the cat was always around the little rented house I had on Fargo Street. She loved to eat Kitty Queen cat food, mostly liver and kidney flavors. I had a somewhat cruel little game I played with her. I squeezed her, and she growled. When I squeezed her in rhythm, she seemed to growl out: “Way, down upon the Swanee RIV-ER!” The word “Riv-er” was always growled out in two quick squeezes. I really deserved to get scratched or clawed for playing rough with her that way, but the sweet little cat never lashed out. After I did my trick with her, to the entertainment of folks, Stephanie usually jumped out the window and didn’t return for awhile. But in the morning, I’d wake up and she would be snuggled next to me in bed. She didn’t usually make much noise except for when I squeezed her, and when she was hungry. She had a gentle, high-pitched “meow”. Â As the years went by, Stephanie, an already gray cat, got a bit grayer. But she was still always nearby, never a lap cat, but quite a companion. I admit I took her pretty much for granted and was never very sentimental about her. I found out how much I cared for her, when tooth problems led to mouth cancer which ultimately killed her. I had to have her put “to sleep” by our veterinarian, and I refused to look at her body, with tears in my eyes. 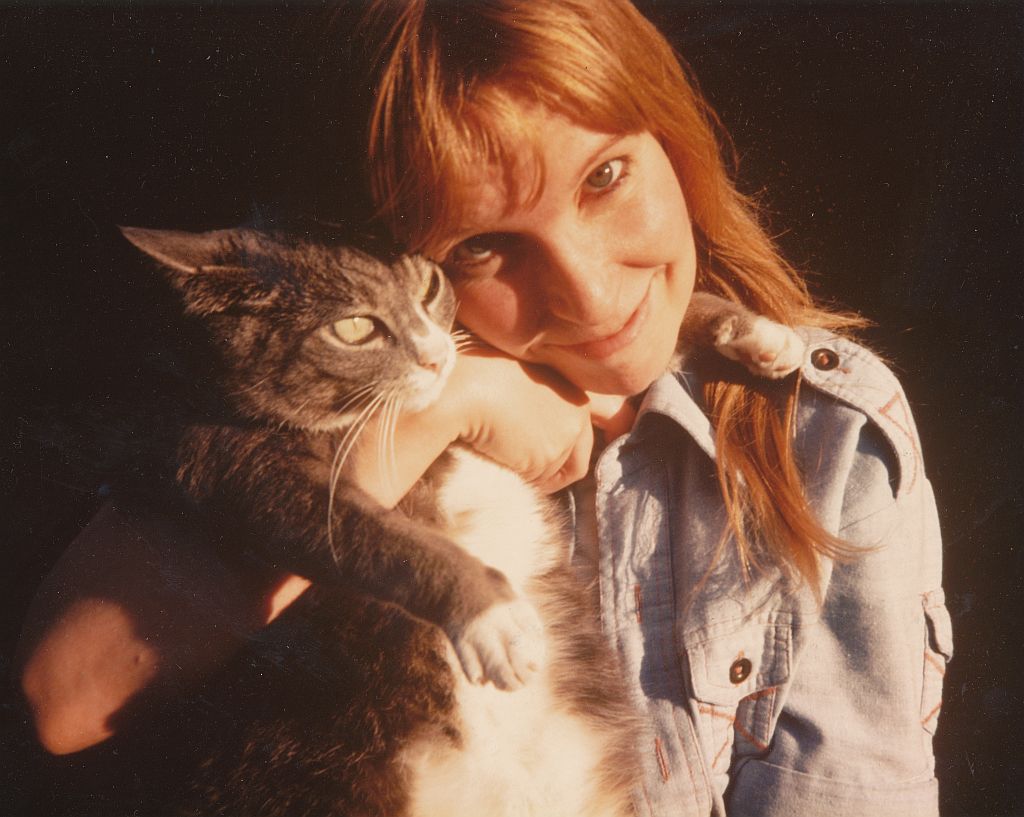 Â Here’s another portrait of my wife Cathy, holding Stephanie. Steph is her usual compliant self, and you can see just how much Cathy loves cats by her expression. Cathy was much more gentle with her than I was. These two pictures were taken by my dear friend, Vincent Davis, and I have many more photos of Stephanie, even a black and white 16mm movie of Steph roaming the yard at the old Fargo Street house. She was with me more than 10 years, and I’ll never forget her.

Â Here’s Felix, 1-29 through 2-4-1933. The Sunday is the first chapter of a continuity involving Felix and his girlfriend Phyllis. I love Otto’s little feminine poses he uses on Phyllis. A frozen soap bubble becomes a Crystal Ball to reveal the couple’s future. In the dailies, Felix gets Danny a job as a delivery boy so that he won’t pay so much attention to Doris. The story develops as a package that Danny is assigned to deliver ticks like a bomb. In the 2-4, you’ll see the conclusion of the “fish story”.

Â Myrtle is from 11-1 to 11-7-1948. My two favorite dailes are the 11-3, in which Junior talks Bingo out of learning to twirl a Yo-Yo, for a very “canine” reason. I also like the 11-6, as Freddie stops an annoying “thumping” noise by putting his foot on Bingo’s tail. There’s something extra “right-around-homey” about this gag. In the Sunday, Freddie is putting anti-freeze in his car which turns out to be a can of maple syrup, and Bingo and Junior want to chase Hyacinth the Cat from “here to Christmas”.

Â Krazy is from 2-8 to 2-10-1943 this time, with 2-9 missing. The whole week revolves around egg rationing in Coconino, everyone is allowed one egg a week. This story reflects World War Two rationing, you’ll note there aren’t any ration cards yet. Ignatz of course, rebels against this state of affairs by getting an Ostrich egg and adopting his own chicken. I like the 2-14 best, as Offissa Pupp gets spanked by an egg-juggling stranger who thinks that Pupp and Ignatz are running a confidence racket. We’ll see you next, when the cats learn to make cream from moonbeams! (By the way, do any of you readers have the Krazy Kat daily from 2-9-1943? I offer a lifetime subscription to the Catblog if you do.)

LATE EXTRA: Our faithful reader, G. Heinlein, has contributed the missing Krazy daily from 2-9-1943 which you will find included above. This isn’t the first time Mr. or Ms. Heinlein has contributed to our little enterprise, and we ain’t fergitten!