Â Happy Thanksgiving y’all! Here are the next two letters that Duane Crowther wrote to Bob Balser in January and February 1953. Duane keeps trying to get in touch with Flora Mock, whom he apparently met while he was a student of William Shull at UCLA . He describes the atmosphere at UPA New York, thriving in spite of the Actor’s strike then going on. They were doing the “Howdy Doody and the Magic Hat” cartoon for Bob Smith, and the theatrical cartoon “Spare The Child”. Duane does quite an analysis of “Spare The Child” in his letterÂ of 2-28-1953. He criticizes Abe Liss, the director of the picture, and sites an “Oedipus situation” in the story. UPA hired Cliff Roberts to do design and backgrounds, effectively relieving Duane of the responsibility. Duane remained in touch with Cliff and was still using him for jobs at Duck Soup in the 1980s and 90s. You’ll see a few opening chess moves on page one of the 2-28-53 letter, Duane played chess all his life. Bob Balser told me that Duane learned a lot of advanced moves from a chess master that Duane met in Japan when he was in the Armed Forces (see The Duane Crowther Letters, Part One). This knowledge served Duane very well, even to the time of his illness, when he could hardly talk, Duane was still playing chess in his sick bed, and LETTING BOB WIN! Evidently Duane was interested in cryptography as well, look at the back of the envelope for the 2-28-53 letter above, and you’ll see an alphabet with odd symbols next to the letters. Either they are code, or Greek, I can’t tell. More of these little pieces of Duane’s history to come.

Â In response to Yowp’s blog, here are the Flintstones 1/3rd page Sundays from November, 1962. Some of these may have been the work of Dick Bickenbach, but the 4th and the 11th seem to be the work of an animator to me, judging by how pushed the poses are. Let me know what you think. To see the 1/2 page versions of these in black and white, head over to Yowp’s blog (link is to the right of the page). You’ll see many fascinating historic screeds, although how Yowp has time to write and assemble them all continues to puzzle me. Remember, just click on the thumbnails above to see them full size. May you all have good things to eat on Thanksgiving.

Â Here are two more in my continuing series of Duane Crowther’s letters to Bob Balser from New York, dated 12-23-52 and 1-6-53. In the 12-23, Duane continues his running joke with Bob about typewriter snafus and the mistakes caused by the “touch system”. Duane was quite the student of pantomime, and went to see the Jean Louis-Barrault Troupe perform a 20 minute sketch. Duane has to sit through a 2 and a half-hour drawing room comedy beforehand, though, and he didn’t speak French! He also ribs Gene Deitch for being into “the straight design stuff” and “Doesn’t UNDERSTAND us animators..(knows) NOTHING ABOUT IT.” Duane really liked Gene’s design ability, as you’ll read. Duane had moved out of the YMCA by this time, and his description of his apartment is very funny, cost him a whopping 75 bucks a month! Note the little drawing of Duane with his new coat and the little dog at the left margin. In the 1-6 letter, Duane criticizes Chaplin’s “Limelight”, asks for a print of “Waiting” by Flora Mock (see his March 5, 1952 letter in “The Duane Crowther Letters Pt. 1”), and fakes Bob Balser out by deliberately not putting a page one in his letter, because Bob failed to put a header on his letter. It would be interesting to read Bob Balser’s side of the correspondence, but Duane probably didn’tÂ keep them. He was not a “saver”, as I remember. Duane concludes the letter with a little drawing of a lady being scared by a spider hiding in a typewriter, which seems to be another running gag between Bob Balser and Duane. Charles Brubaker and Mike Sporn both like these letters and want to see more! I’m especially pleased that Mike is reading them, since he is a consummate film-maker, blogger, and New Yorker, choose your own order.

Felix, from 9-30 to 10-6-1935, continues Felix’s adventures as a stowaway. Thanks to the little gold idol he stole from the Ape’s island, Felix continues to elude the sailors who are after him. The Chinese cook, Wong, in the 10-3, is a harbinger of the Tong intrigue coming to Felix’s world. In the 10-6 Sunday, the Professor swabs Felix with a powerful anesthetic, which makes him insensible to pain! Felix swipes two hamburgers from a lunch counter and is unhurt by the blows from Joe, the proprietor. Felix proves his humanity in the last panel, as he vows to chase the mice out of Joe’s place someday, to pay him for the hamburgers.

Â Krazy continues to entertain Current, his Jelly Fish visitor in the 8-11 through 8-16-1941 strips. This adds to the story begun in the previous week’s strips, posted in “The Duane Crowther Letters Pt. One”. Herriman spins all kinds of verbal and visual puns out of the parade of fishy characters that flop in Krazy’s house all week, including an Angel Fish, a Flying “Fitch”, a Star Fish and an Electric Eel. Keep reading, folks, I’ll be seeing you soon. 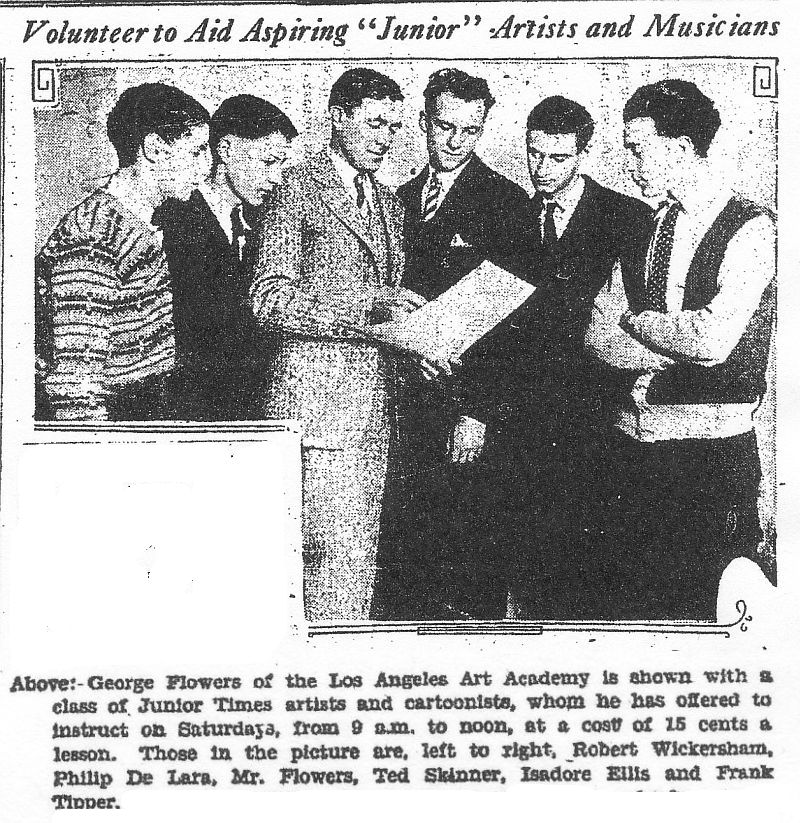 Â Wow, art instruction for 15 cents a lesson! That’s what the future animators of the 1930s were paying in 1927 courtesy of the Los Angeles Junior Times. You’ll note that Bob Wickersham, Phil De Lara, Izzy Ellis and Frank Tipper were among the students on those halcyon Saturdays in Los Angeles. You’ll also note Bob Wickersham doing his best Chaplin impression for Aunt Dolly’s Hi-Jinks in the photo below. Also if you look down the page, you’ll see the comic strips and editorial drawings for the Junior Times by Izzy Ellis (Hezy Tate, Pearl Handle), Bill Zaboly (Lucky Lem), Bob Wickersham (Fido Bark), Morey Reden (Highshine Joe, Jim Dandy), Isadore Ellis (Incidents inÂ Lives of Famous Characters)Â and Frank Tipper (The Average Home). These cartoons all appeared in February of 1927. Even though Aunt Dolly expressly forbade continuity, you will notice that Jim Dandy and Fido Bark still use it. Fido Bark is a printed out of sequence. 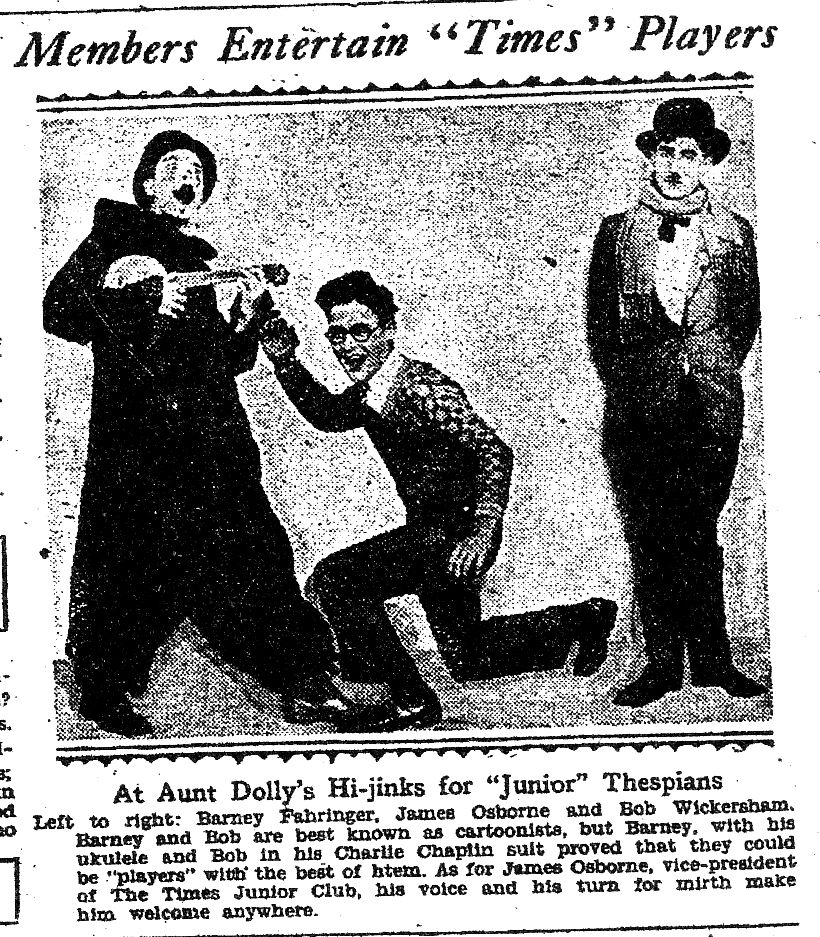 Â Hardie Gramatky was a busy little guy, according to his bio printed in the Junior Times. He took cartooning classes with correspondence school, the Landon School of Cartooning. Like Joe Barbera, Hardie worked in a bank before becoming a full time cartoonist. I don’t know if the Junior Times ever ran a part two of this biography, I couldn’t find it. These Junior Times posts are the most labor intensive ones I do, so I hope you readers enjoy them. 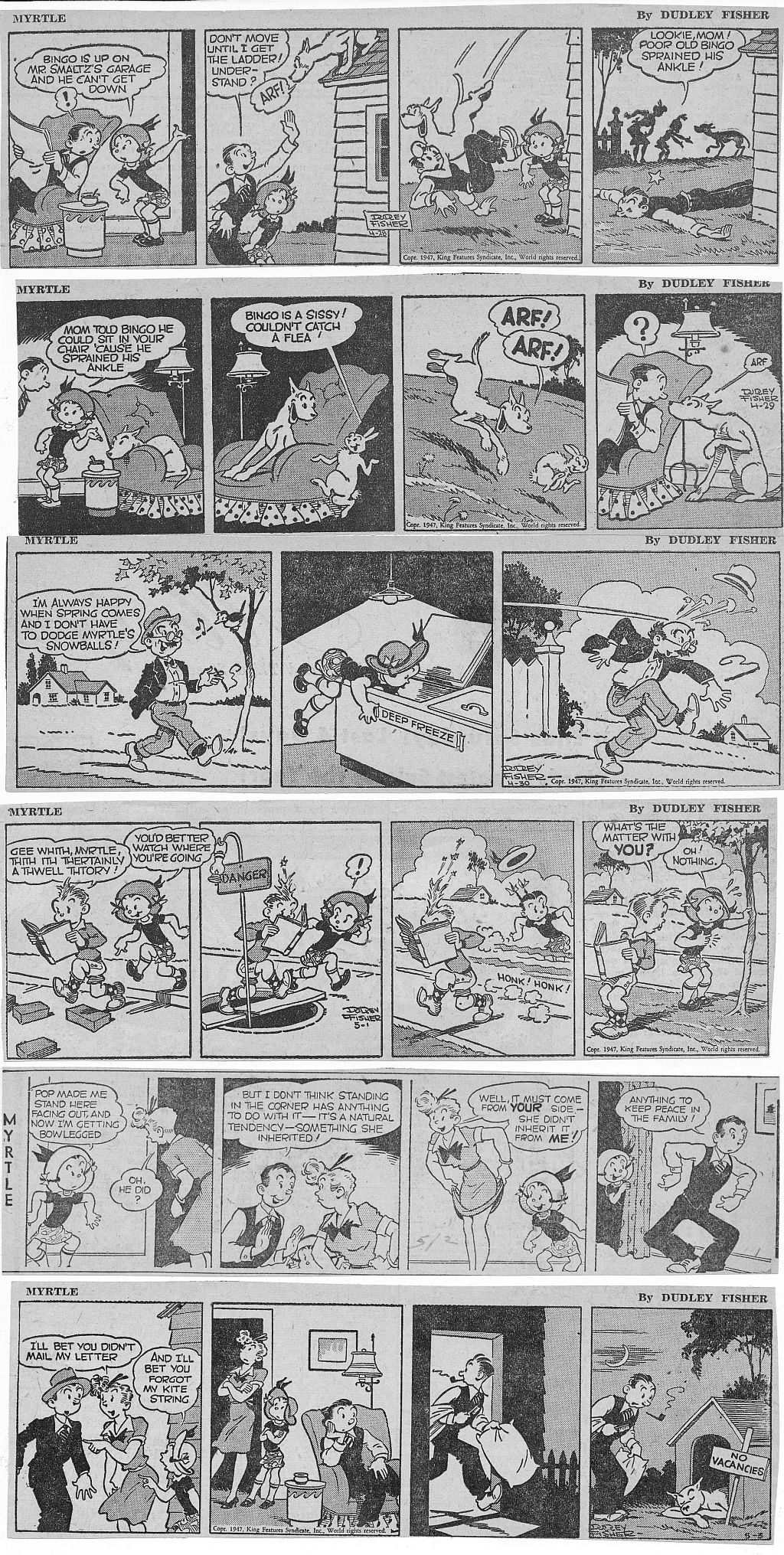 Â Here’s Myrtle, from 4-28 to 5-3-1947. Dudley Fisher is really in top form in the 4-28 and 4-29 strips, I love how Bingo leaps off the roof and graps Pa’s head in his two paws in a really human looking grip. I like the use of silhouette in the last panel with Pa lying prone in the foreground with a star coming out of his head. I love the business in the 4-29 of Bingo chasing his friend the rabbit with his sprained ankle, and then appealing to Pa for sympathy in the last panel. These strips are loaded with great poses and appealing drawing. The Myrtle dailies featured the kind of cartooning we used to take for granted. See you next time. 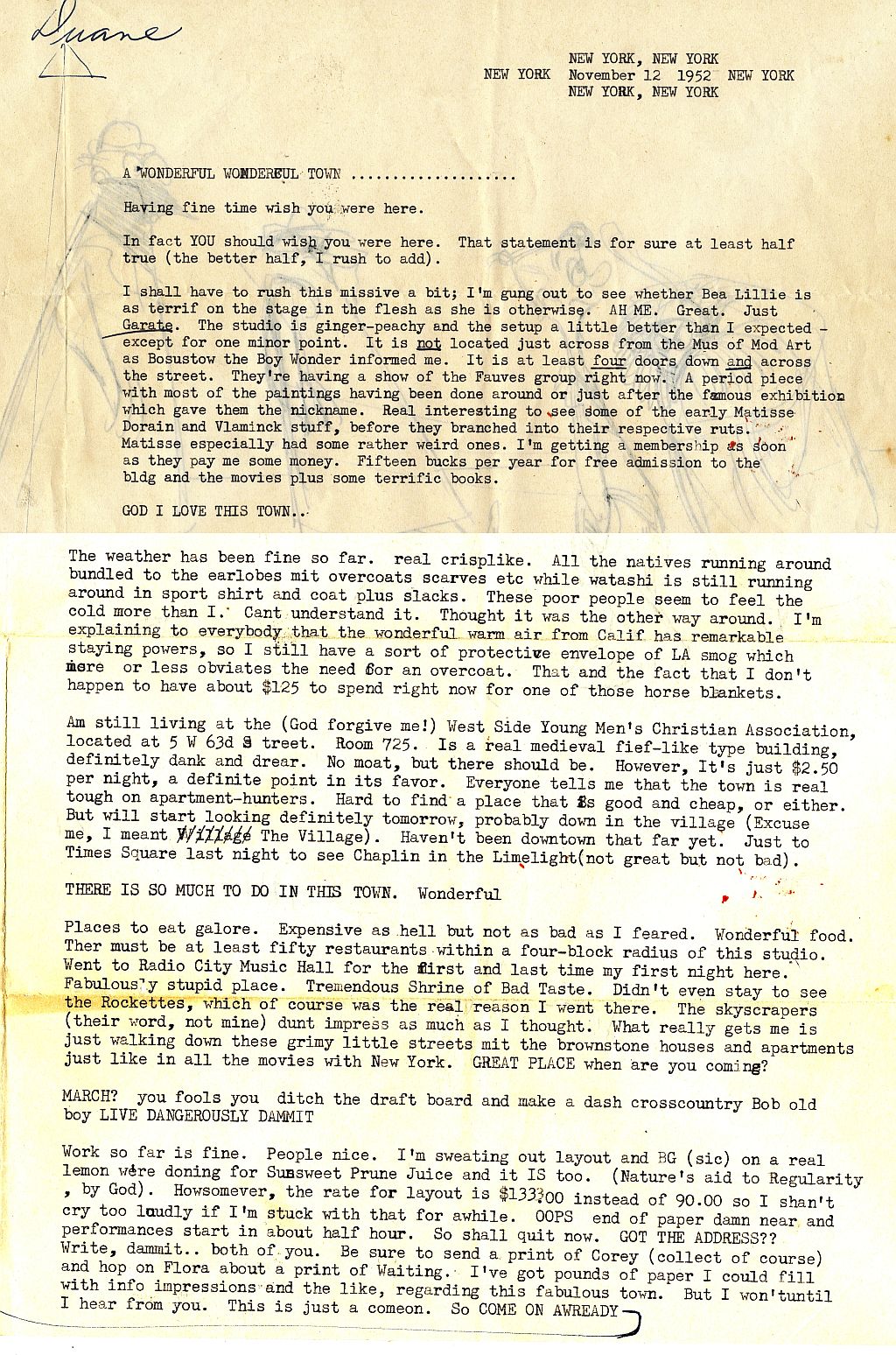 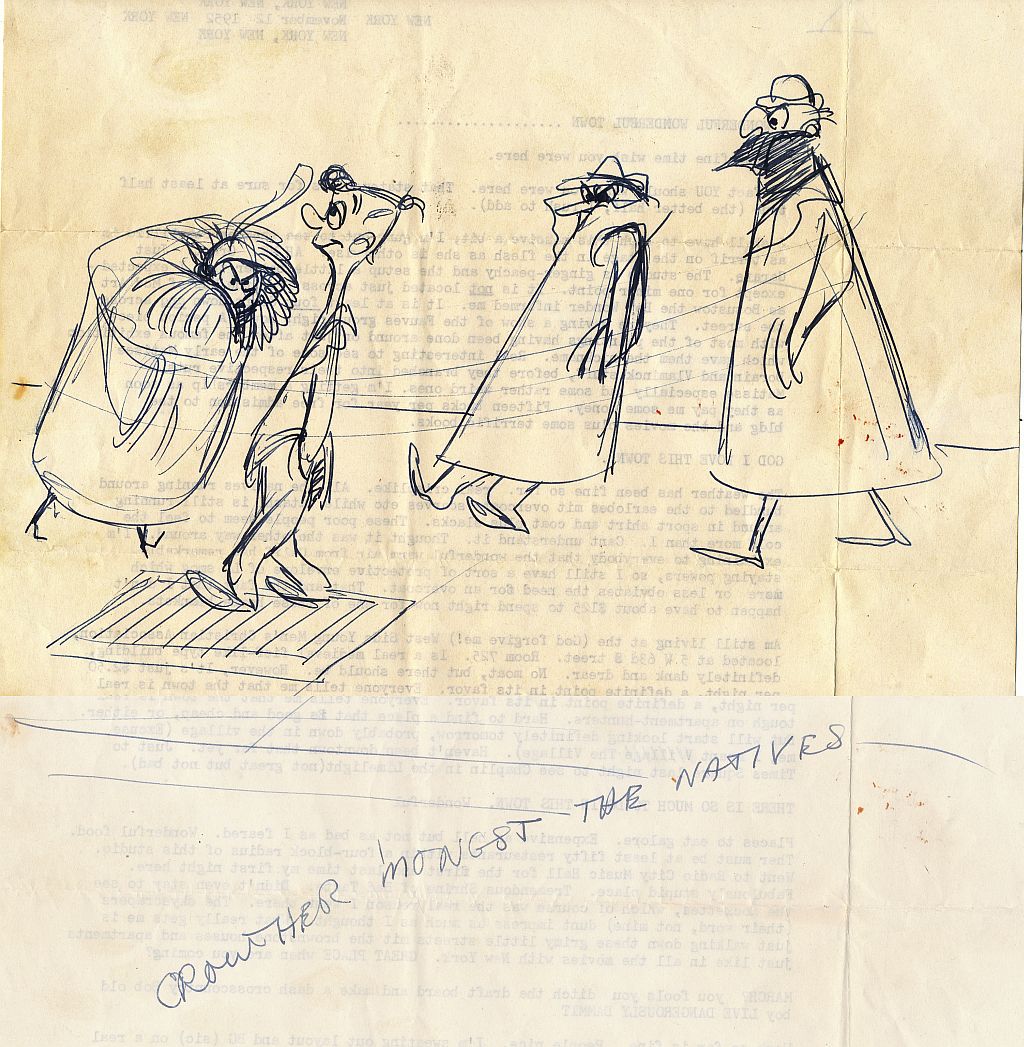 Â As a tribute to both Duane Crowther and the fine (battered) city of New York, we present his letters to Bob (Bobbert) and Cima Balser from Nov. 12th and 25th, 1952. Duane could stay at the YMCA in N.Y. in those days for $2.50 a night! Winter coats were only $125.00, and he was doing TV commercial layout for the great Gene Deitch! What a life, seeing Beatrice Lillie performing live, dishing on Radio City Music Hall and the Rockettes, going to art shows at the Museum of Modern Art. This was New York City at it’s most artistic and user-friendly. I thought that Mike Sporn and Greg Ford in particular might enjoy reading these. I love Duane’s drawing on the back of the Nov. 12th letter, note he’s walking on a sidewalk heating grate! He draws himself a little like Waldo, don’t you think? I love Duane’s jokes about the Sunsweet Prunes commercial he worked on in the 11-25 letter: “Looseness goes with prune juice, anyway.” (He writes in the margin: “Note! Joke..((It’s a bit cut-off from my scanner.))) These letters are reproduced through the courtesy of Cathy Karol-Crowther, Duane’s widow. It’s so wonderful that Bob and Cima Balser kept these letters. 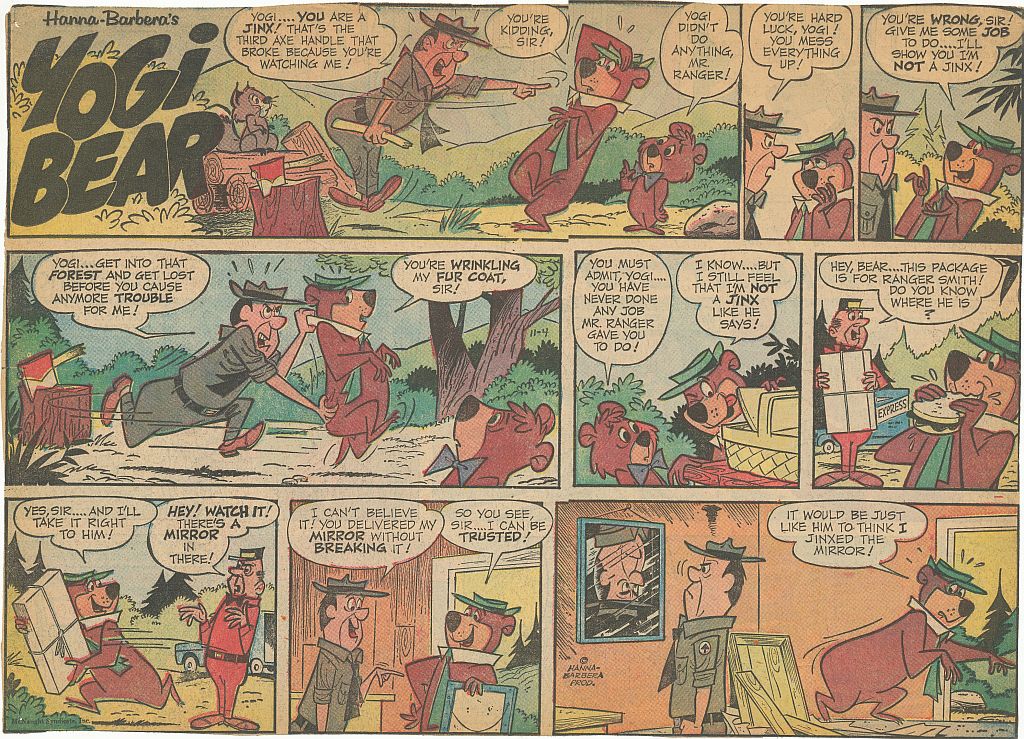 Â Yowp just put the b/w “tab’ versions of these half-page Yogi Bear Sunday pages from Nov. 1962 on his website. Go there by clicking the link to your right and read what he has to say about the comics. Harvey Eisenberg drew and lettered all four of these. His “Yogi Bear” logos were always distinctive, in a very slick way. I, too like the cow/fresh buttermilk gag in the 11-25 page. Duane would hate his letters being on the same page as these H-B Sundays. He never had any respect for their cartoons, going all the way back to the first Tom and Jerrys. He DID like some of the artists who worked on the H-B stuff, however. He really got along well with George Nicholas, and I remember the two of them playing chess at Fred Calvert’s old studio. Remember California readers, vote “Yes” on Prop. 37! Go to Itza Cat’s Facebook page: www.facebook.com/someothercatÂ to see his political posters about “Frankenfoods”. See you here again soon!