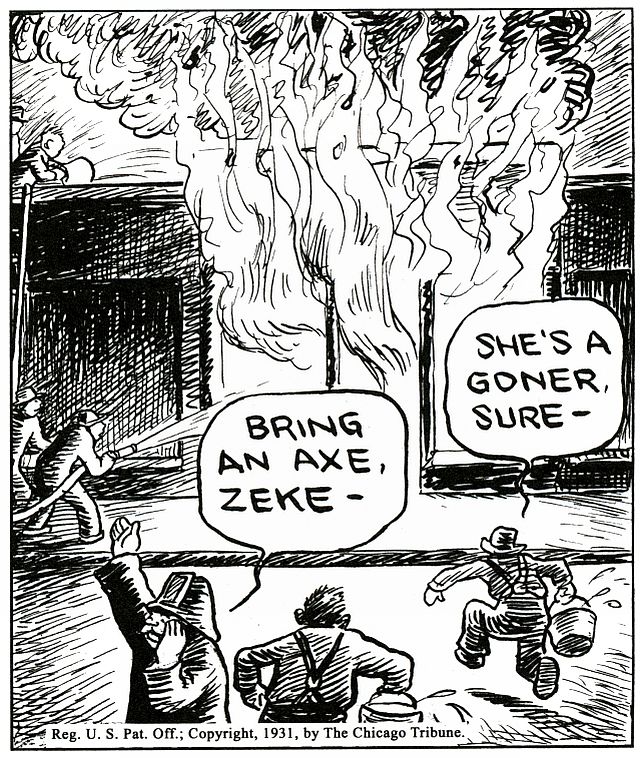 This is an additional post, which I’m doing separately to call attention to my producer and partner Greg Ford’s horrible apartment fire which happened on Tuesday, May 4th. He and his girlfriend and writing partnerÂ Ronnie Scheib lost about 90% of their belongings in an electrical fire at their Crosby Street apartment in New York City. The building dates to 1864, and may have the original “Edison wiring” in it. Be that as it may, most of their manuscripts, both published and un-published were destroyed (they write film criticism for Daily Variety and many other publications), allÂ their clothes, books and most of their live-action film collection. They have lived in Crosby street over 35 years, so you can imagine all the precious family mementos and treasures that are now gone. They are living in temporary quarters at our art director Kim Miskoe’s apartment now. I’m asking for my readers to donate a little money to help them get back on their feet. You may send it to my Paypal account, C/O kausler@att.net, and I’ll get the funds to Greg and Ronnie. Of course I’ll be donating, too. I should have a new mailing address for Greg soon, for those who would wish to write to him directly. It’s very fortunate that Greg and Ronnie were not injured in the fire, andÂ managed to escape with the few clothes on their backs. Evidently this fire happened close to bedtime. Ronnie’s purse and Greg’s passport were recovered from the gutted apartment, and they are going to go through the wreckage to salvage what they can. Ronnie’s computer hard disc may be salvageable, they’re going to try.

Â Â Â Â  Greg wouldn’t want me to ask you readers for help, he’s a pretty independent guy. But without Greg, this blog wouldn’t exist, and my short “It’s ‘The Cat'” wouldn’t be a reality. So if you can donate, even a few dollars, I would appreciate it very much on mine and Greg’s behalf.

Â Â Â Â  By the way, for those who care, the artwork to the next Cat short, “There Must Be Some Other Cat”, was undamaged and is at Greg’s office, awaiting photography. It may be a long time before Greg can once again turn attention to such trifling matters as cartoons. Again, if you can, please help. Greg is a friend of very long and honored standing. Thank You.

This time, Felix meets the Clutching Hand of old time mystery fame. In strips from 11-2 to 11-8-1936, Felix is locked in a haunted house with the Hand.Â These are fine examples of Otto Messmer’s adept depictions of the mysterious and hauntingly ethereal ectoplasmic denizens of the subconscious, in other words, good spook stuff. In the Sunday, you will notice that the art is NOT by Otto, but quite possibly Tom Palmer or Joe Oriolo. The designs of the supporting characters in particular look like something out of a color Van Beuren cartoon, like a Molly Moo Cow or Toonerville Trolley short. 1936 was the year that the Van Beuren closed shop, and some of his last releases were Felix the Cat color cartoons. So maybe Otto let some unemployed Van Beuren staffer handle a few Sundays for him?

Krazy this time is from 4-22 to 4-27-1940, and Mimi the French Poodle (?) wanders back into Coconino (in the 4-24) to eventually teach school again. Offissa Pupp is too fat for Mimi, and there is a rather subtle gag in the 4-27 concerning Krazy’s gender confusion. Mimi has mistaken him for a tomcat, (this time). Mimi, along with her male predecessor, Kiskidi Kuku, are some of the strangest characters that Garge ever designed, they don’t look so much like dogs as giant rats. They speak in French accents, so the Coconino denizens instantly accept these creatures as their superiors. Mimi looks very attractive to almost all the guys, Krazy only feels love for Mimi intermittently, when his “male” side is dominant. More of this creepiness to follow. 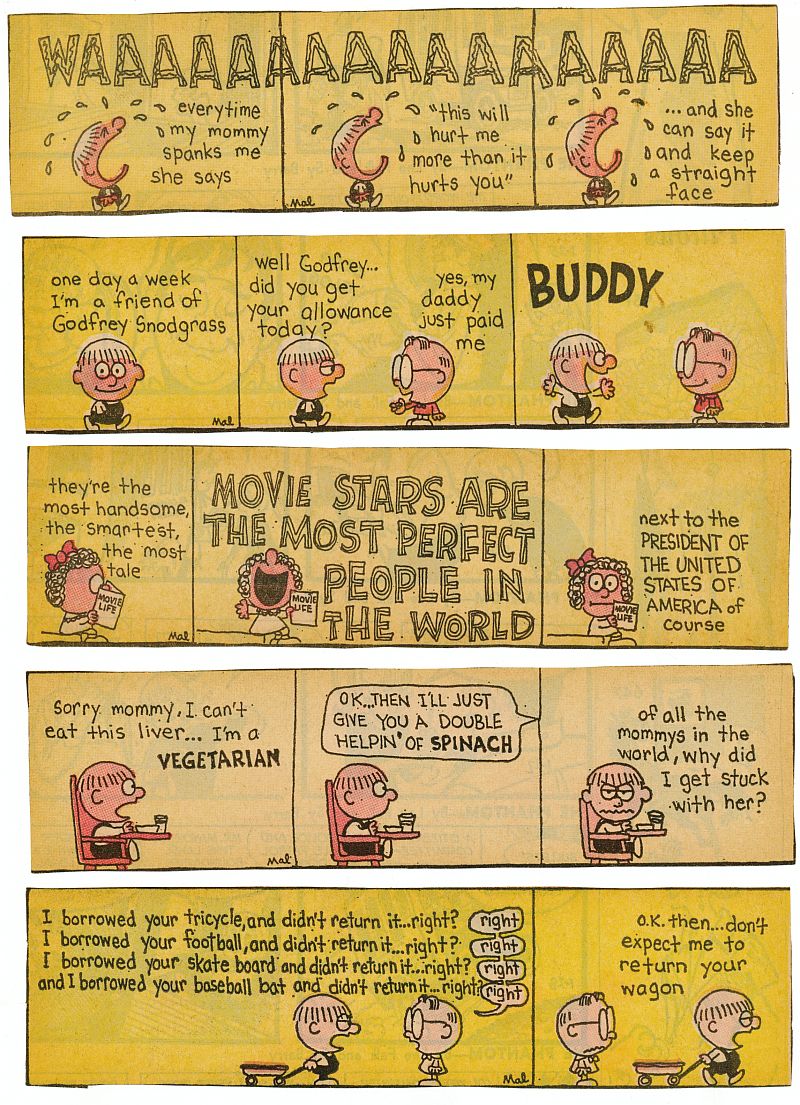 Patrick is from 1-24 to 1-28-1966 this time. The 1/25 is iconographic, Patrick only likes Godfrey on allowance day. This one little strip really touches on an essential truth about friendship, does anybody truly like another human being just for himself or herself, or for what we can GET from that human being? Patrick is an unrepentant hedonist. Next time, y’all. And remember, DON’T BUY BP!!!

All my readers, you know what’s going on in the Gulf of Mexico right now stands to be one of the most horrible environmental catastrophes in United States history. To a large extent, the fault is with ourselves for our insatiable appetite for oil, and also to British Petroleum and our own government. BP got special dispensation from the US Government to drill in the Gulf without proper safeguards and the equipment standing by to contain any possible spills before they spread. They were excused from this by our Government, no doubt due to BP’s lobby. BP has cloaked themselves in a mantle of green, advertising that they invest heavily in solar and wind power, take care of animals in the path of oil exploration, etc. This horrible tragedy in the Gulf shows that this is all lies and propaganda. Here in Southern California, BP oil is Arco Gas. PLEASE, all my readers, DO NOT BUY ARCO GAS OR OIL! In other states, please ask your local gasoline dealers if they get oil from BP or the Gulf, and if they do, don’t buy it! This is the best and most powerful way to send a message to BP that their poor safety practices in the Gulf will not be tolerated. BP and Arco consistently undersell every other oil company. The reason they can do it is that they don’t spend money on the extra ships and equipment to contain oil spills. What seems to be “cheap” gas comes at a terrible price, poisoning of all fish, crustacean and animal life in the Gulf region, and possibly up the Eastern seaboard. Our food supply, navigation on the Mississippi river, and the lives and livelihoods of the Shrimpers, fishermen, the port of New Orleans, and so much else are in grave danger from this ongoing spill. It may cost a little more per gallon to buy elsewhere than BP, but eventually BP/Arco’s prices will spike. After all, they will want us to pay “our share” of their botched efforts to drill oil so deep undersea in the Gulf.

Remember that the oil companies buy up all real progress in electric and solar powered motor vehicles by buying all new solar battery patents! Just watch the documentary “Who Killed the Electric Car?” the next time it’s on your PBS station. You will see the story of Stanford R. Ovshinsky, inventor of the Nickel Metal Hydride Battery trade named Ovonic. Before Mr. Ovshinksy developed his battery, electric vehicles (EVs) could only travel about 60 miles on a charge, due to inefficient batteries. The Ovonic battery expanded the cruising range to 300 miles on a charge. The automotive and oil industries deep-sixed this invention with a one-two punch, first General Motors bought a 60% stake in Ovonic Batteries, then they sold it off on Oct. 23rd, 2000 to Chevron/Texaco! It hasn’t been heard of since. When I saw that part of “Who Killed the Electric Car?”, it was a life-changing experience for me. The Oil companies want to kill us, and kill the entire planet for the last 3 or 4 trillion dollars of oil left in the ground and under the sea. The BATTERY EXISTED!!! The breakthrough that would make Solar charging of cars possible, and about the same cruising range as a gasoline powered car per charge!! But the oil companies and car manufacturers don’t want the world to have the battery, it would make them lose money. They have put profits ahead of animals, mankind, food, clean water, fish and LIFE ITSELF! And where is the outrage? Who cares if the battery that would mean clean, safe, non-polluting, low-costÂ transportation is now in the hands of Chevron/Texaco, who have a vested interest in never letting the public use it. How many other battery patents were made to disappear by big oil? I don’t know how much more proof is needed to show that humanityÂ is on a suicide path ifÂ it remains wedded to theÂ oil dynasty. Remember, DON’T BUY BP!!!

Normally, I resist the soapbox, but this incident has really touched me, so back to the comics and thanks for letting me vent: Felix this time is from 10-26 to 11-1-1936. In the dailies, Felix helps Tanglefoot the detective solve several mysteries, including a missing toupee! Felix gets little reward or respect for his crime solving, sad to say. In the Sunday, Felix accidentally blows up a bull. Big changes coming up in the Sunday page next time, wait until you see it! 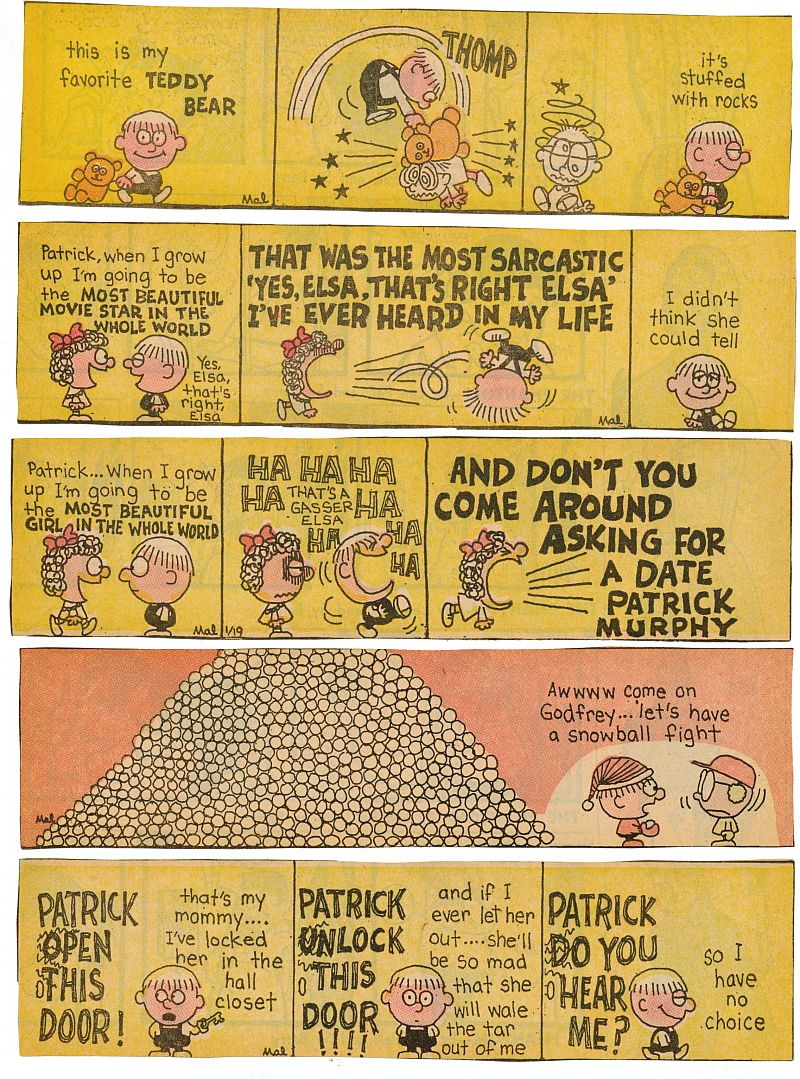 Patrick is from 1-17 to 1-21-1966. Patrick is really good at pushing Elsa’s buttons in the 1-18 and 1-19 strips, and the coda for the week has Mommy locked in the hall closet. After all, Patrick has no choice. I’m getting a lot of good comments on the Patrick strips, more interest than I thought would be there. That’s good, but remember that this is the CATblog, so don’t fail to click on the Felix and Krazy strips to blow them up to reading size. The design in Patrick is so simple that it almost reads in thumbnail form. See you next time, and remember, DON’T BUY BP!!!

Felix (10-19 to 10-25-36) solves the clock mystery for Tanglefoot the detective, but it’s a little confusingly written. Seems the man of the house hid all the clocks in the attic so they wouldn’t gong in the middle of the night and give away his punch-drunkenness to his wife! He’s making money at those prize fights in lieu of a job and doesn’t want his cover blown. It’s a little near-fetched that he’d have to hide the clocks for such an obscure reason, but what the heck, it’s comics! In the Sunday, Poppa Dud is once again mad at our Felix for making him buy a washing machine, so tries to do away with him at a Carnival. Felix is a good luck charm for him, though, so once again the Cat is back in Dud’s good graces. 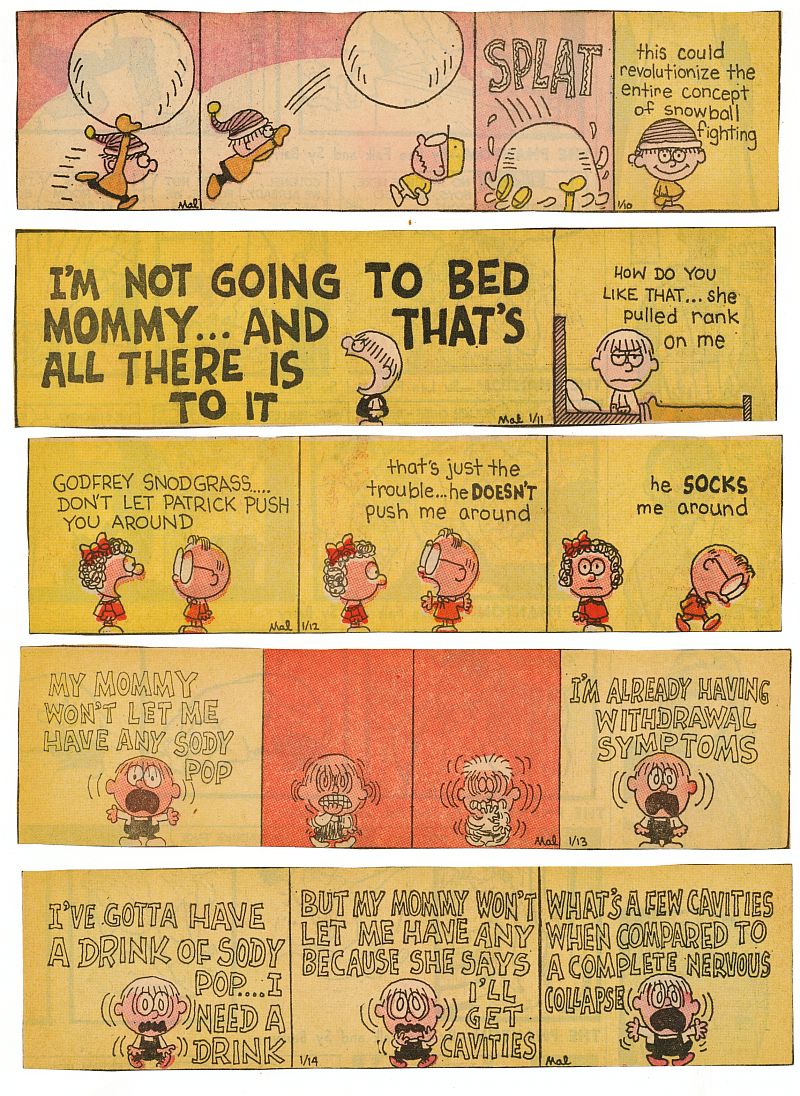 Patrick is from 1/10 to 1/14/1966 this time. He is his usual disagreeable self, sockingÂ Godfrey with snowballs and other things, and having an especially emotional withdrawal from “Sody Pop” in the 1/13 and 1/14 strips. This was long before all the “high fructose corn syrup” they lace “Sody Pop” with today, so Patrick was a genuine Cane Sugar freak! Believe it or not, he was better off with the Sugar than with the Fructose!

This week, my friend Milt Gray has started his “Viagri Ampleten” blog. Go to www.viagriampleten.comÂ to see a very colorful and lushly drawn “strip” (in many senses of the word). These panels are really animation layouts, arranged as an Internet comic strip to attract attention to Milt’s long-in-gestation 12 minute animated film featuring Miss Ampleten and a lot of mysterious “spy” drama. I will also put a permanent link to Milt’s blog on this site, so that you can visit Viagri whenever you wish. TellÂ him I sent you! (Milt’s strip is a bit on the spicy side, so parents may wish to supervise it’s use.) See you next time in the land of Internet strips!