In this post, â€œRacketty Ann and the Lost Worldâ€ reaches itâ€™s fifth and final chapter. My favorite page is number 18, as Racketty Ann confides to her captivated audience, that she â€œmoved the island.â€ I love the lightly inked dinosaurs in the clouds over Racketty Annâ€™s head and the bold darkness surrounding the raccoons at the bottom of the page. Note the confused expressions on the raccoons faces at the top of page 19 as they try to figure out â€œHow Can You Do That?â€ and â€œCAN she do that?â€ The next panel on page 19 is a dynamic triangular composition as Racketty Ann declaims to the admiring crowd and their pointy little faces seem to be holding up her airplane. On page 20, Racketty Ann revs up her plane and saying â€œGotta Go! Iâ€™ve got a summit meeting!â€, takes off for the last time on a mysterious journey. Cathy gets in a subtle gag in the last panel as the raccoons muse about the fate of the dinosaur island: â€œShe probably moved it to MARS or something.â€, and Virgil (or a friend of his) concludes with â€œShe has friends in HIGH PLACES.â€ In many of her stories, a fantastic premise is gracefully brought back down to normal with a little remark, an understated â€œshaggy racoonâ€ ending. I hope you enjoyed Cathyâ€™s epic story, an exclusive CATBLOG feature! 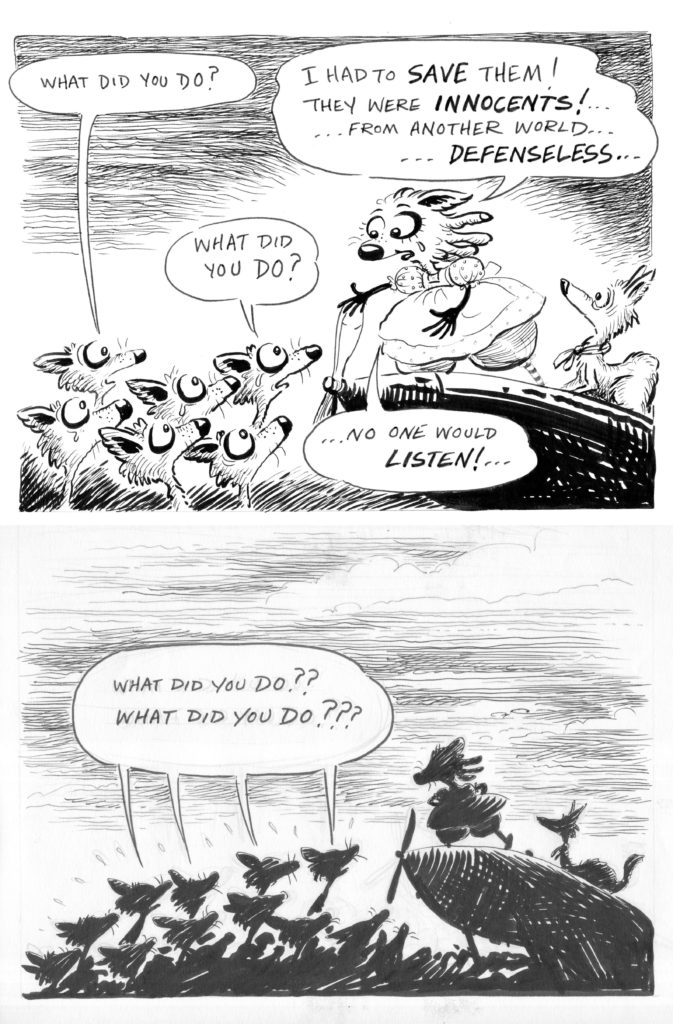 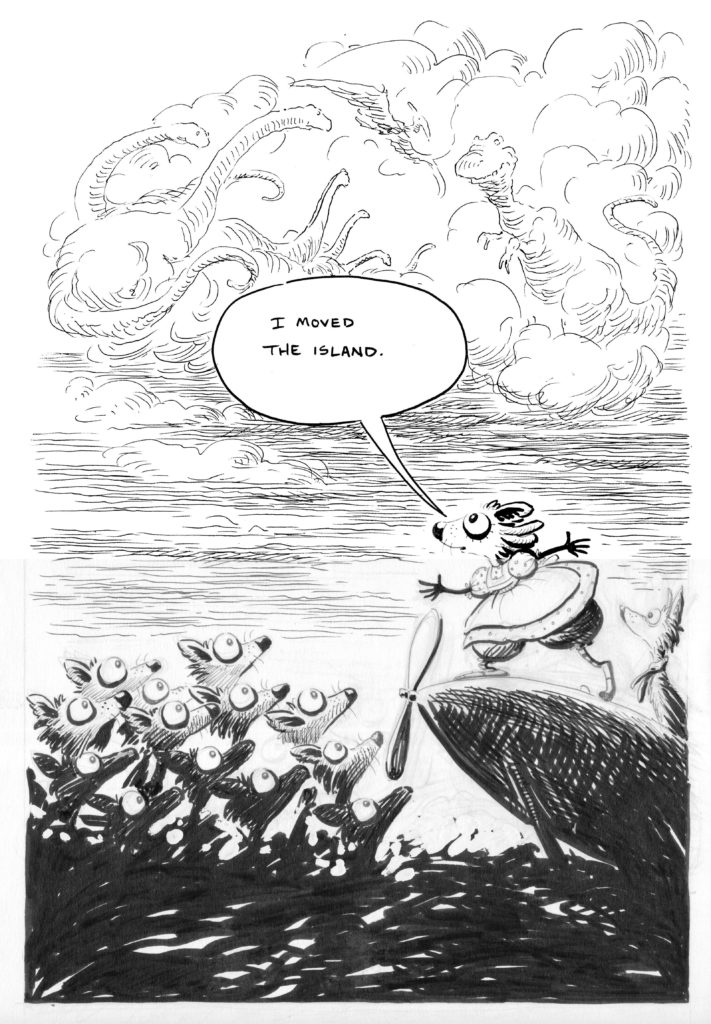 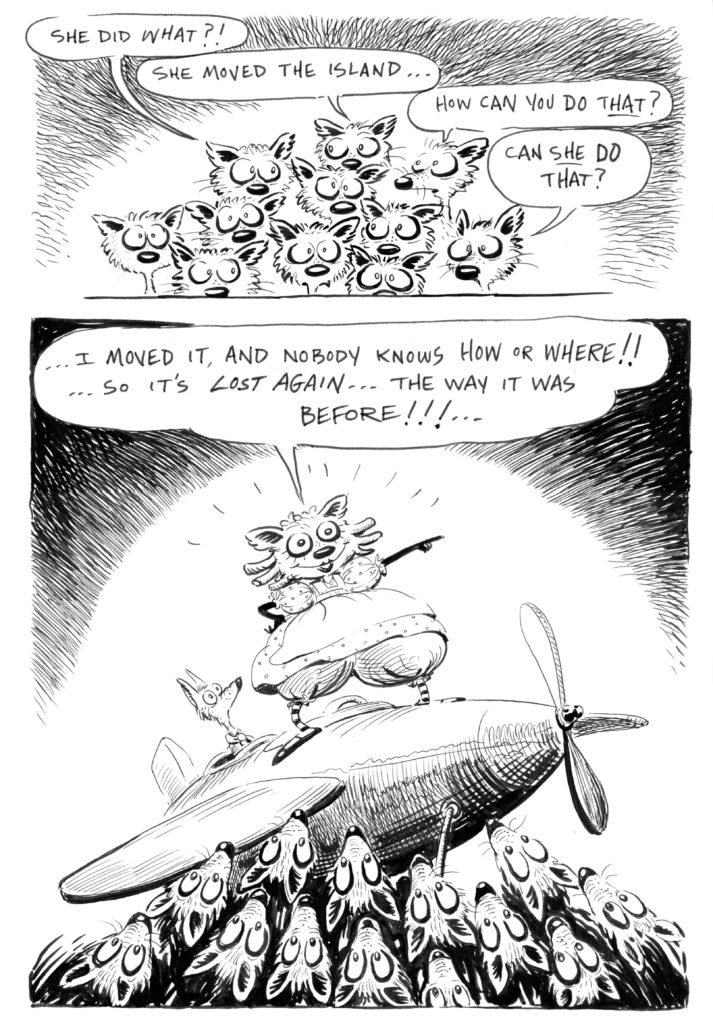 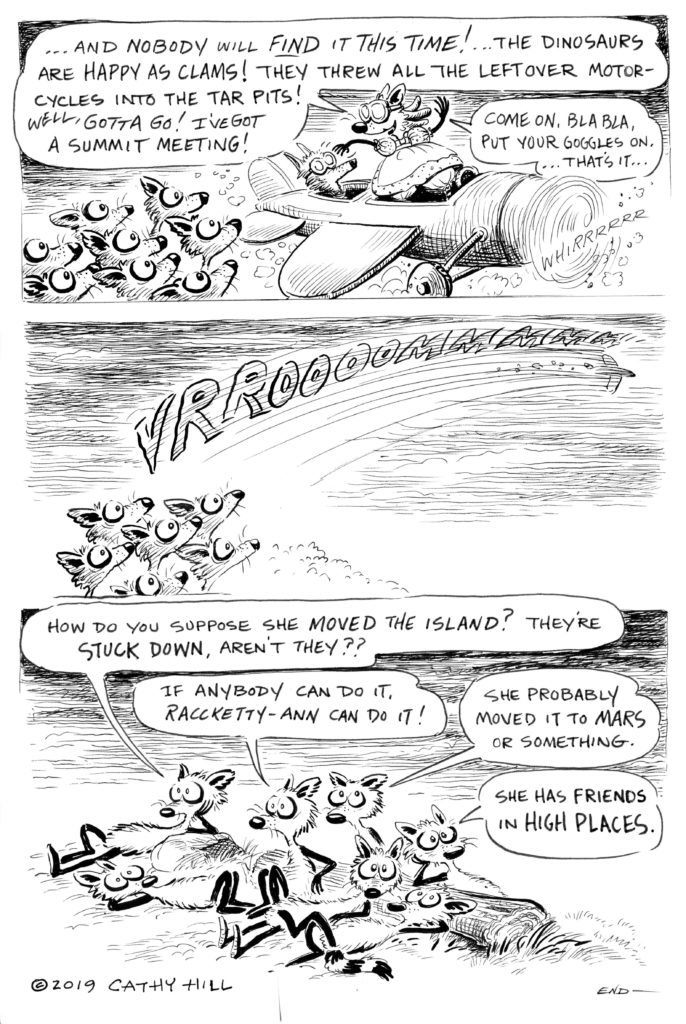 Felix is from 8-21 to 8-27-1933 this time. The Dooits visit to the farm is coming to an end, as Felix tries to make the boarders feel at home, farm style. In the 8-26, Danny is afraid his beloved cat will be left behind in the move back to the city, so he puts old fashioned luggage decals all over Felix’s body. The 8-27 Sunday page is full of funny drawings as Felix and Danny get side-tracked to the Circus on their way to the grocery store.  I love those wacky heads of Felix that Otto Messmer drew for the “Felix Movies” toy that’s on top of the page.

Myrtle, from 5-23 to 5-29-1949, continues Myrtle’s fleeting romance with rich kid Walton. I love the 5-23, which contains a rare moment of sentiment as Myrtle hugs Bimbo to comfort him after Walton refuses to shake hands with the sensitive canine.  The 5-28 again features Myrtle’s bi-sexuality as she nearly becomes a he as she disrobes to put on a boy scout uniform, and Sampson tops her by putting on her dress and hat complete with braids! In the Sunday page, 5-29, Hyacinth the cat appears in both panels as Freddie tries to get Arnold to sneak out to a golf match by putting on false whiskers to fool his wife.

Krazy from 12-13 to 12-25-1943, features the never ending battle of wits between Offissa Pupp and Ignatz. They try disguises in the 12-14, Ignatz tries to look like his portrait in the 12-15, and in the 12-16 Iggy tries to manufacture a brick in a mold right in front of the confused Pupp. The 12-20 to 12-25 strips feature a wacky woodpecker. Perhaps Garge saw a Woody Woodpecker in a cinema in 1943. Herriman’s woodpecker taps a hole in Krazy’s door, taps an iron tree trunk, taps Offissa Pupp’s wooden head, and makes iron and clay sculptures of himself to fool the Pupp. The Officer’s Christmas present to the woodpecker is to throw him in jail with Ignatz. “Kwee Pippils, them Wood Peckas”, says Krazy. 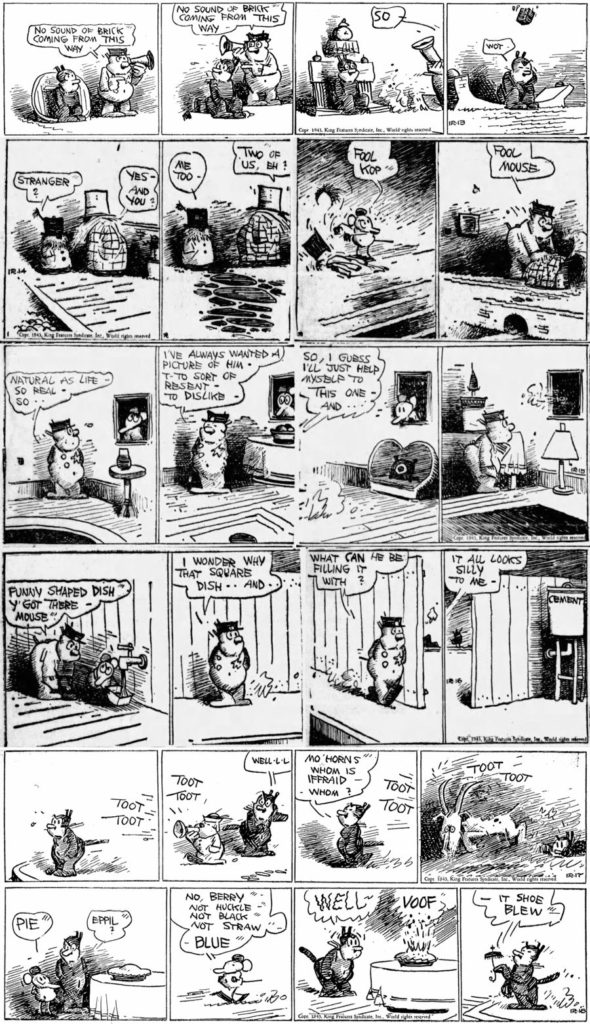 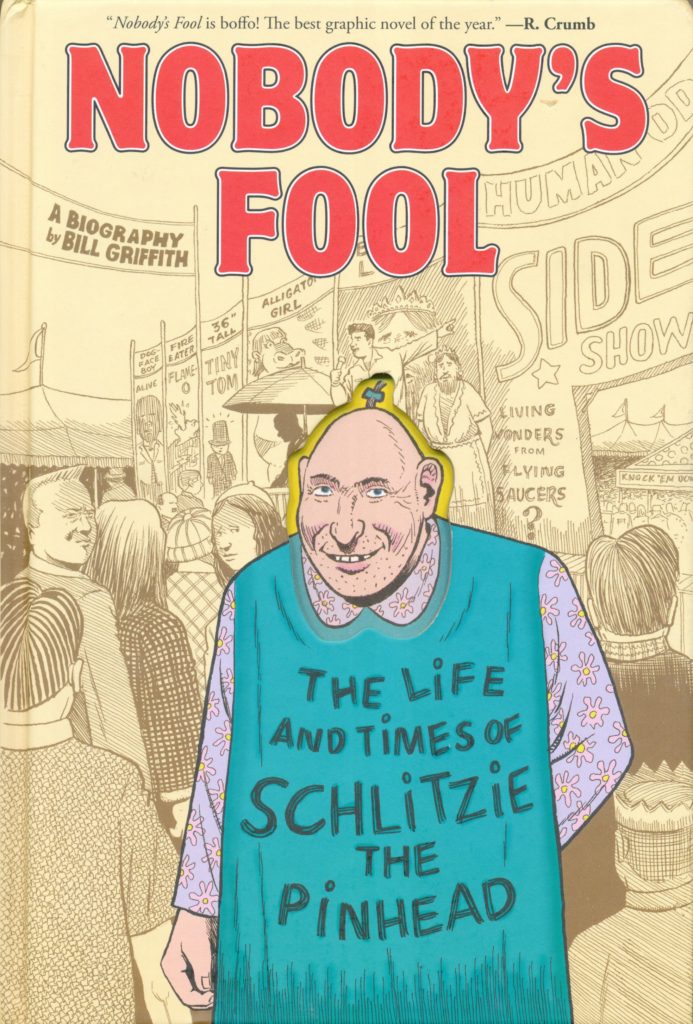 Boffo!
You will enjoy reading Bill Griffithâ€™s graphic novel biography of Schlitzie, the famous pinhead, star of MGMâ€™s â€œFreaksâ€. This book would make a terrific feature picture in itself, you can just see it in black and white with a few color scenes, and maybe getting a real pinhead (or digitally modified) to play the main part. The carnival settings are really well done and well thought out. The ink lines and meticulous attention to the details of the buildings are wonderful to look at. If you are a fan of Carnival or old time Midway subjects-â€œFreaksâ€, â€œCarny (1980)â€, â€œNightmare Alleyâ€; the details of Schlitzieâ€™s life should be especially interesting. There are intense dramatic moments where Schlitzie gets riled up and says â€œYâ€™SEE!â€ repeatedly. He is at his most monstrous at these points in the story, yet vulnerable. The making of â€œFreaksâ€ sequence was of course very involving; pg. 100 was especially good as Bill Griffith provides a translation of Schlitzieâ€™s garbled dialog. Pg. 233 really resonated with me, as Griffith draws Schlitzieâ€™s time hanging out in MacArthur Park. I went to Chouinard on Seventh street, which was right across from MacArthur Park and I used to frequent the area quite a bit in 1971, so I could have seen Schlitzie, but sadly, never did. This is a very well done graphic novel and made a very sympathetic character out of a so-called â€œfreakâ€. Pgs. 240, 241 and 242 are a poignant farewell. Did you ever see the old Jimmy Durante TV show? At the end of every show, Jimmy put on a battered hat and coat, wished Mrs. Calabash â€œGoodnightâ€ and walked away from camera into a dark set lit with star spotlights back to infinity. Schlitzie walking over the stars of Hollywood Blvd. reminded me of Duranteâ€™s finale. The die-cut cover is attention-getting as well. Bill Griffith reportedly spent five years working on this book. Quite an accomplishment when you consider the hours he spends each week on the â€œZippy the Pinheadâ€ comic strip. Note that Robert Crumb rates this book as â€œthe best graphic novel of the yearâ€, and Mr. Crumb is never too lavish with his praise.