Hi Y’all! Hope you had a great Thanksgiving! Cathy and I just stuck around home this year and made up a feast out of turkey parts, (breast and tails) baked yams, green beans, stuffing and pineapple pie for dessert. We saw two new movies: Into The Wild and American Gangster. Into The Wild is very good, a haunting story that is hard to stop thinking about, even though I am not crazy about the ending. American Gangster had a lot of potential, but I wanted the two stars, Denzel Washington and Russell Crowe to meet much earlier in the film than they actually do. As a result, the story seems to drift and mark time until the fated meeting comes up and when that happens, the film only runs 15 more minutes! Imagine if you had two lead actors under contract to be in your movie, would you have them on parallel tracks for over two hours? I don’t think you would, the temptation to have them meet would be too great.

Are you looking at Allan Holtz’s Stripper’s Guide blog every Saturday? There is a link to his site on the right side of this page. He reprints a lot of rare George Herriman editorial cartoons from 1906, San Francisco Examiner I believe. This should give you a good dose of Garge until Krazy Kat returns some day.

Here are the next two pages of “Beaux and Arrows” from Jim Tyer in 1963, and the next episode of “Lane Allen’s Diary”. I don’t know if Tyer wrote these stories as well as drawing them, maybe Mark Evanier would know. Cathy and I got some painting in on Thursday morning at the Pasadena Tournament of Roses headquarters. They occupy the former Wrigley mansion over on Orange Grove. It’s certainly impressive what a fortune Wrigley made out of chewing gum! We enjoyed painting the mansion in the morning light, it was 80 degrees! About 32 painters were there, including master painter, Jason Situ, and our leader Walter McNall. Walter used to work for Mrs. Wrigley when he was a teenager, cutting palm fronds off the trees. He learned to shinny up palms when he was stationed in the South Pacific during World War 2. Unfortunately, Walter lost his job when he made Mrs. Wrigley nervous with his death defying antics. He also told me a story on Eisenhower. It seems that the bathroom on the first floor of the mansion is called the “Eisenhower Bathroom”. Ike was supposed to be Grand Marshal of a Rose Parade (1950s?) and they were holding up the parade while Ike visited the “facilities” in the Wrigley mansion. Well, a long time went by and Eisenhower didn’t emerge. Finally, a frantic knock on the door and hurry up call revealed that Eisenhower couldn’t get out of the bathroom. He locked himself in! Of course, Ike was finally released in time to assume his seat on the float.

At the critique, Â Walter chastised me for making my palm fronds too detailed, with too many small brush strokes. It’s always a juggling act to do a good watercolor, between drawing, light and shadow and composition, it’s easy to get too caught up in the details. Cathy did much better with her oil of the mansion, doing her shadows in lavender hues and the light parts of the building in a light gamboge/ochre. I don’t know what we will do for Turkey day, but I hope all you dear readers have a great Thanksgiving! Enjoy these comics and we’ll see you soon.

Hi Folks. Well, in the absence of Krazy, Felix (drawn by Jim Tyer) will take his place for awhile. Here (in reverse order) are the first two pages of “Beaux and Arrows” from Felix The Cat No. 2 Jan.-Mar. 1963, published by Dell. This story was requested by Milton Knight. Felix and Kitty are wonderful, but Pussyfoot seems to have fired Tyer’s imagination. It’s a treat to see all the crafty and malevolent expressions with which JT has endowed his villain. I’ll be reprinting more pages from this story over the next few weeks, along with the next episodes of “Lane Allen’s Diary”. Of course, you know the drill, just click on the images to enlarge them. The Felix pages are small files, so you may have to click twice to get them to display at the best viewing size.

I’ve also uploaded another snapshot from our trip to Mexico, this one of Acapulco. I like the contrast of the poor fishermen with the giant hotels and housing developments in the background. The fishermen of Acapulco don’t seem to use rods, but stand hip-deep in ocean water and cast their lines from reels that they carry in their hands. They cast like a cowboy, looping the fishing line over their heads like a lasso. They seem to catch plenty of fish with this method, as we saw a large pile of fish for sale along the boardwalk. I’ll try to scan some of our watercolors so that you may see what we painted in the next few posts. I did a little more animation on “There Must Be Some Other Cat” this week, doing a 10 second opening tag for the picture with “The Cat” listening to a Victrola. I sent the test to my producer, so we’ll see if he likes it or not. Hi Greg, are ya listenin’? 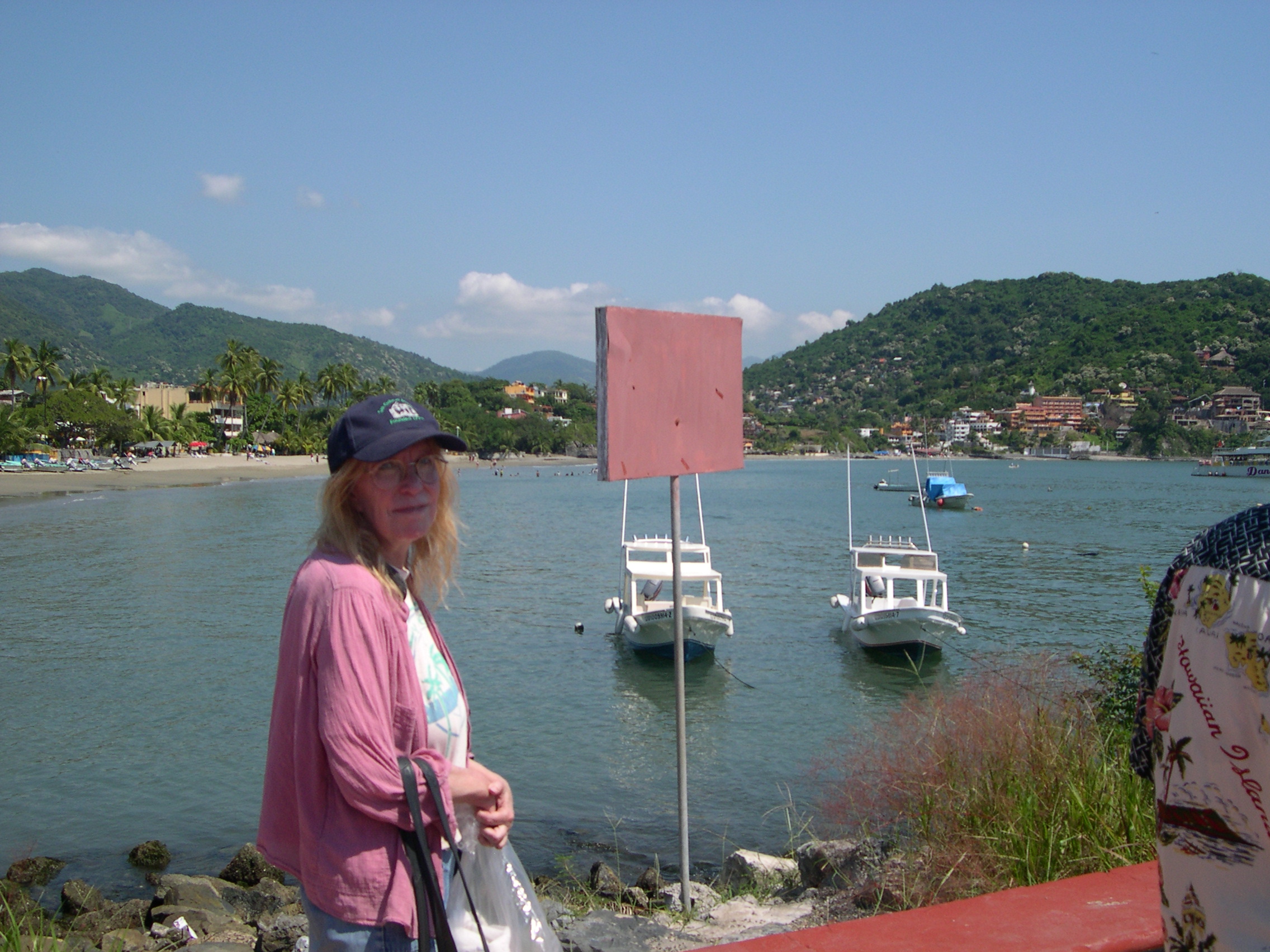 Como Esta Usted? Cathy and I are back from our painting trip. We went on the Norwegian Star cruise ship to the Mexican riviera! The McNalls, a couple we paint with every week, talked us into coming with them to the coastal towns of Mexico, including Acapulco, Zihuatenajo/Ixtapa, Puerto Vallarta and Cabo San Lucas. What a great trip, the food on board the ship was never ending, you could eat at all hours of the day and night, breakfast being especially good. All the ports were a fascinating combination of old and new. Such as Zihuatenajo, which combined an old Mexican fishing village (with Yamaha outboard motors) right next to Ixtapa, a vast area of sandy beaches that looks like a parking lot for giant hotels. That’s a photo of my wife, Cathy, standing next to the water in Zihuatenajo. We painted the old church there from a cafe. For the price of a cerveza (don’t drink the water), the owner let us sit there for a couple of hours and paint watercolors. We worked entirely in watercolor this trip, as oils have a bit of a hard time travelling. Our friend Walter McNall even gave us all an art lesson one morning on how to indicate figures in a landscape, by just painting simple shapes, he calls them his “carrot people”. He paints a carrot shape for the shoulders and body, then adds a small dot for a head afterwards. We also devised shapes to represent horses, dogs and cats. On the way to Acapulco, we were standing near the pool on deck 12, when the ship lurched and started to tip to the port side. About 4 feet of water from the pool started to pour down the deck, frightening the girls and knocking several men down. Then the boat tipped to starboard and I found out that my shoes were waterproof. The water seeped into the ship’s elevators, light fixtures and soaked the carpet for at least 4 decks below us! A lot of speculation as to what happened was put to rest when the Captain came onto the PA and quietly explained that he had to stop the ship because he “didn’t want to hurt a humpbacked whale” that was in our path. I resisted the urge to send the Cap. a cartoon of him wearing a T-shirt that said: “I brake for whales”. We found ourselves painting mostly churches on this trip, but in Cabo San Lucas, Cathy did a study of Sammy Hagar’s famous club, the Cabo Wabo. We also took a glass-bottom boat out to “Los Arcos”, the famous rocks, featuring an arched formation that looks like a big window. There were many fish swarming about that the Captain fed. We could see their colorful scales through the glass bottom. The boat sailed very close to some seals basking on the rocks that looked like big brown burritos. We painted some watercolors of the rocks later from the Norwegian Star’s deck. We had a balcony off our stateroom that was a good place to paint from as well. In Puerto Vallarta, we found the statue of John Huston that the citizensÂ put thereÂ to commemorate the filming of “The Night of the Iguana”. Elizabeth Taylor still has a house in Puerto, but we couldn’t get too near it. The park that the statue of Huston is in is a narrow little strip of island right in the center of town. We also found a friendly little tabby cat on the islandÂ with very sleek fur who meowed (I swear) with a Mexican accent! Of course, perros and gatos are not permitted there, but cats don’t believe in signs. It was a greatÂ eight days, filled with painting, fellowship and fun.Â  The stewards and the people were all as nice as could be. We met one very amusing lady from Chicago who was filling a photo album with pictures of all the “fat ladies” she saw on board. Maybe fat women are rare in Chicago. She certainly had a bumper crop of heavies to snap, some of them so portly that they had to get around in motorized chairs. They must have loved the never ending buffets!

These will be the last Krazy strips I will be reprinting for awhile, as we have reached the end of 1938, and I don’t have 1939 yet. When I get more, you will see them here. Lane Allan will saunter forth for awhile yet. I am working on gettingÂ another strip for this blog, may or may not be cat related. I have been doing several things DVD related, but I’d better not talk about them, I might get quoted! See ya next time.