Â Felix is from 12-24 to 12-31-1934 this time. The 12-31 daily strip is displayed BEFORE the 12-30 Sunday page. The Sandusky Register did not publish on Christmas Day in 1934, so the Felix daily from that date is missing. If anyone can supply the missing daily, you’ll get a lifetime subscription to the Catblog. Felix is struggling mightily to keep his happy new home with the Dooits. He even makes himself into a footstool for Father Dooit in the 12-31. Felix seems to have crossed over into Bringing Up Father territory in the 12-30 Sunday, as he clobbers the Millionaire’s wife with a snowball, stopping her 0ff-key singing, much to the joy of Mr. Millionaire. If you want to continue reading Felix in date order, go to May 27, 2011 in the archives and click on the thumbnails. If you come back here next time, Felix will be skipping back in time to Jan. 1st, 1933. I’m curious where he was living then.

Â Myrtle is from 9-27 to 10-3-1948. The dailies tell a continuous story about Bingo talking “real human speech”. Of course, it’s just a gag that Sampson and Myrtle have cooked up, Sampson hides in the closet and talks, while Bingo stands in front of the closed closet door and mouths the words, in an attempt to fool Myrtle’s gullible family. I chuckled at the 10-2, as Bingo gives out with some naughty words. Look at the strip to find out why. Isn’t that lighting effect beautiful in the second panel of the Sunday page? Alas, Hyacinth isn’t with us this time.

Â Krazy, from 1-4 to 1-9-1943 still reflects wartime conditions. This time it’s blackouts. Wardens would go around neighborhoods in the WW 2 days, making sure everyone turned their lights out or drew blackout curtains over the windows so that enemy planes would think there were no houses under them. In Coconino County, the citizenry seem to think that if they walk around with blindfolds on, they are sufficiently blacked-out and no enemy can see them. This all leads up to the 1-9, as Krazy points out that blackouts don’t apply to him as he can see in the “dokk”. I love the last panel as an unseen Kat converses with “Mr. Owl”, who has Ignatz with him. Mr. Owl explains to Krazy that he is Ignatz’s “eyes..in the dark”. There is a sinister undertone to this strip, as Owls feed on mice, and maybe Ignatz just escaped becoming owl chow, thanks to Krazy’s natural night vision goggles. 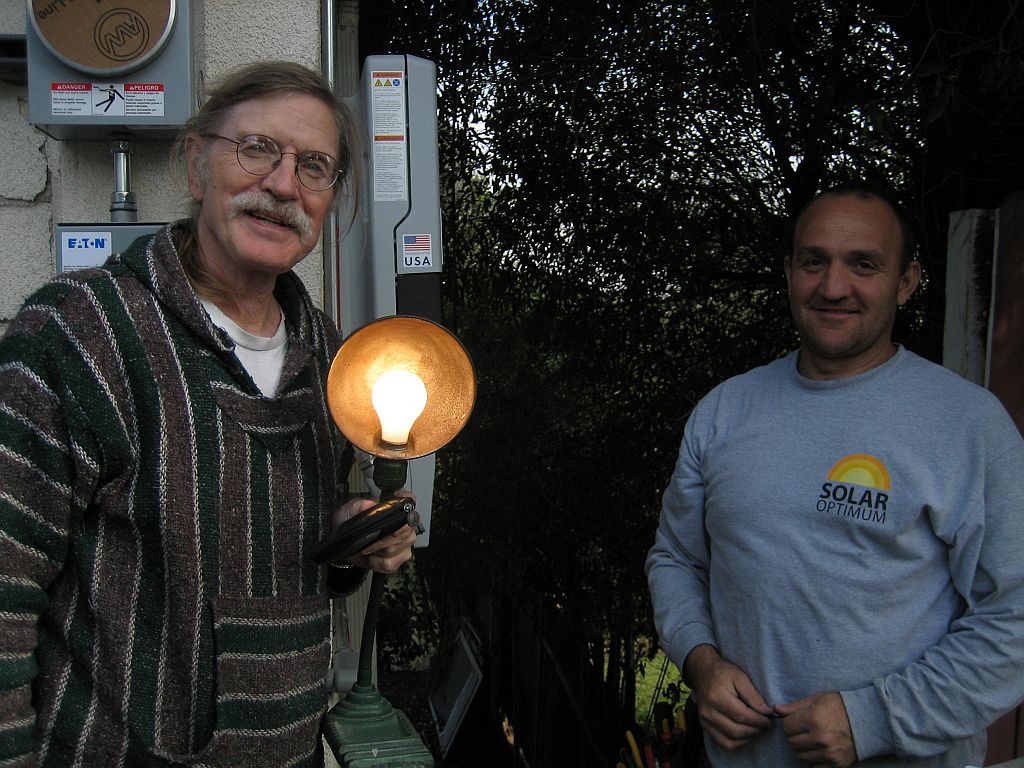 Â Hey, don’t ever let ’em tell you that solar power is easy. We had some panels installed on the roof and it took from last July to January of 2016 to complete the job. The roof had to be re-shingled, then we had to design the system (which took a lot of emails), then they put on the panels, then upgraded the meter to 200 amp service, then installed the inverter to change DC to AC power, then the Glendale Water and Power folks had to inspect the system (3 trips), then install a second meter, then give PTO (Permission To Operate). I threw the switch myself to turn the system on. We are now actually generating power from the sun! The photo above was shot before we got the official PTO. The inverter we got has an outlet on it which you can plug things into during the day if the electric grid does a Ken Lay and shuts down. This was my first brush with solar power and I was very excited and happy! The guy on the right side of the photo is an electrician who works for the solar company we used, Solar Optimum. They STILL aren’t through! A special little computer reader has to be installed to keep track of our generation and usage. Everytime I look at the panels I remember the Bell System Science Series show: “Our Mr. Sun” from 1956, SIXTY years ago. This wonderful TV show, directed by Frank Capra and Bill Hurtz (animation),

Â predicted that the solar energy from Mr. Sun would solve the Earth’s fuel problem and even predicted the Solar Battery! After all this time, there still isn’t a really efficient and low cost Solar Battery, but the Tesla company is working on one. Hopefully Big Oil won’t buy up the patent THIS time! At last, part of the scenario of “Our Mr. Sun” is a reality.

Â Felix, 12-17 to 12-23-1934, features Felix’s happy reunion with the Danny Dooit family, and their cantankerous Dachshund. Plenty of long dog gags here. In the Sunday page, Felix continues to stay with the Millionaire’s family, feeding his bonanza of fresh milk to his alley cat buddies.

Â Myrtle is from 9-20 to 9-26-1948 this time. I like the 9-24, as Myrtle discovers a box of candy on the upstairs bed, then has to pretend she knows nothingÂ when Freddy asks her about it. I like the little coy pose she does in the last panel. Myrtle’s bare head makes a rare appearance in the 9-22 as her hat flies off in surprise when the clock Sampson is repairing strikes 13. In the Sunday, Hyacinth the cat holds her nose at Myrtle’s fish catch in the second panel.

Â Some WW 2 “Spy” points get made in the Krazy dailies from 12-28-1942 to 1-2-1943. Ignatz is in the “Sicritt Soivitz” and gets all his information from the “Grape Wine”.Â  Check out Garge’s mastery of knife technique in the 1-1 and 1-2-1943 strips, especially the final panel of the 1-2, as a character emerges from the “Grape Wine” who reminds me of Winston Churchill. The delicate knife scratches look like fine branches of fernsÂ that surround theÂ “Churchill” character. Probably by this time in his career, George Herriman’s arthritis problems were starting to affect his drawing, as was the reduction in daily strip space caused by the wartime demand for newsprint.