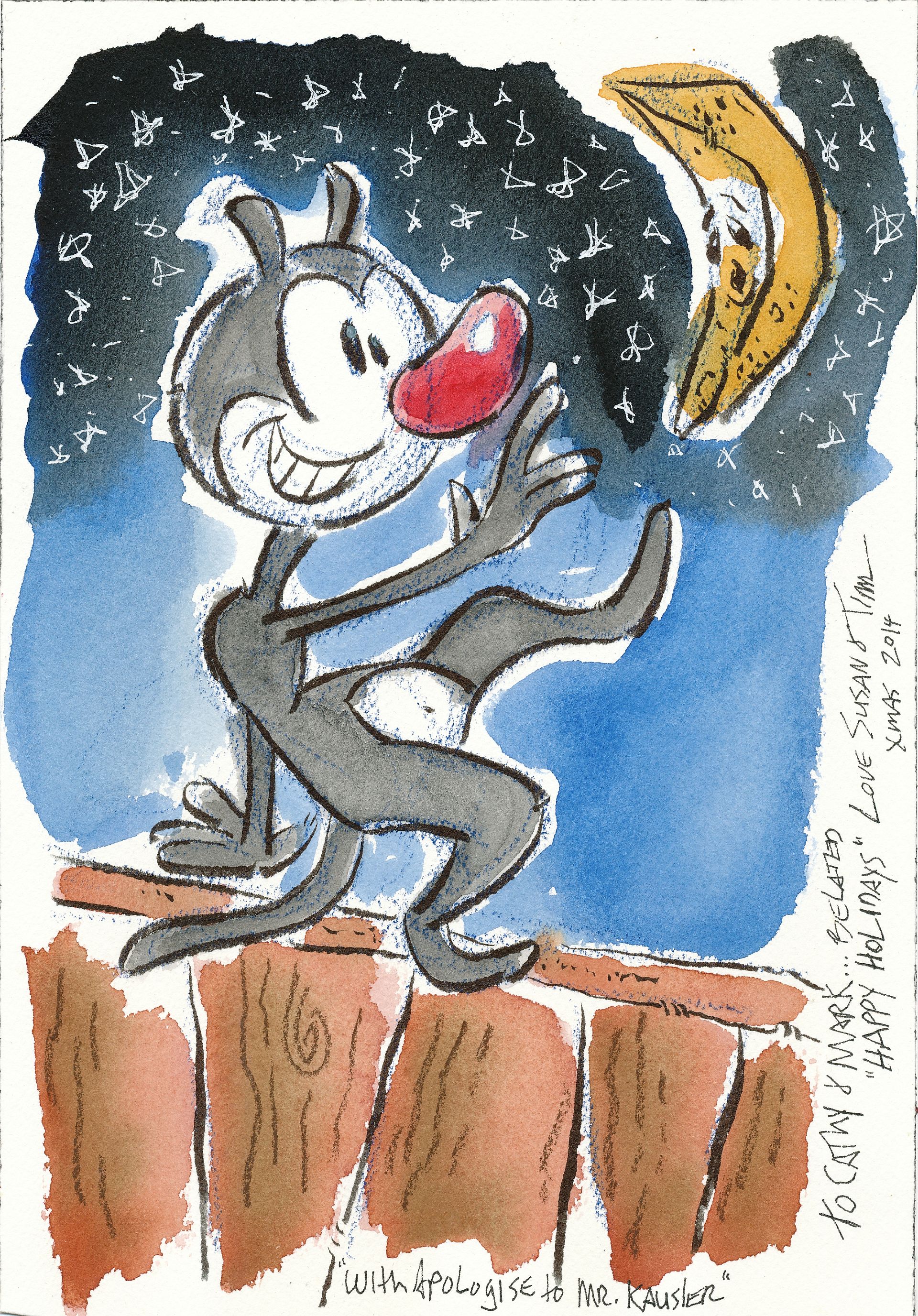 “Til’ the mistletoe comes down, ’til the evergreen turns brown, once again, there’s Christmas in my heart..” as the old song goes. Here’s a great post-holiday treat, my old pal James (Tim) Walker sent me this original watercolor painting inspired by “It’s ‘The Cat””! Tim has Parkinson’s disease, as anyone who follows his website: www.jamestimwalker.comÂ , knows. He published a book a couple years back called “Drawings From The Left”, which showcased artwork Tim has done with his left hand after the Parkinson’s made his right hand too feeble to hold a pencil. Now, the medical science has advanced to the point that Tim can make a transition back to drawing with his right hand again. The painting above was done with that hand, if he keeps this up Tim will become another Alex Lovy! I love the boldness of this watercolor, the white abstract shapes that stand in for stars, and the crazy, antic pose of Itza. The banana-yellow moon and the ultramarine blue background are eye-catching colors. Tim’s health battles haven’t dimmed his bold approach to color and design. I hope you will enjoy this new painting and visit him on the web! 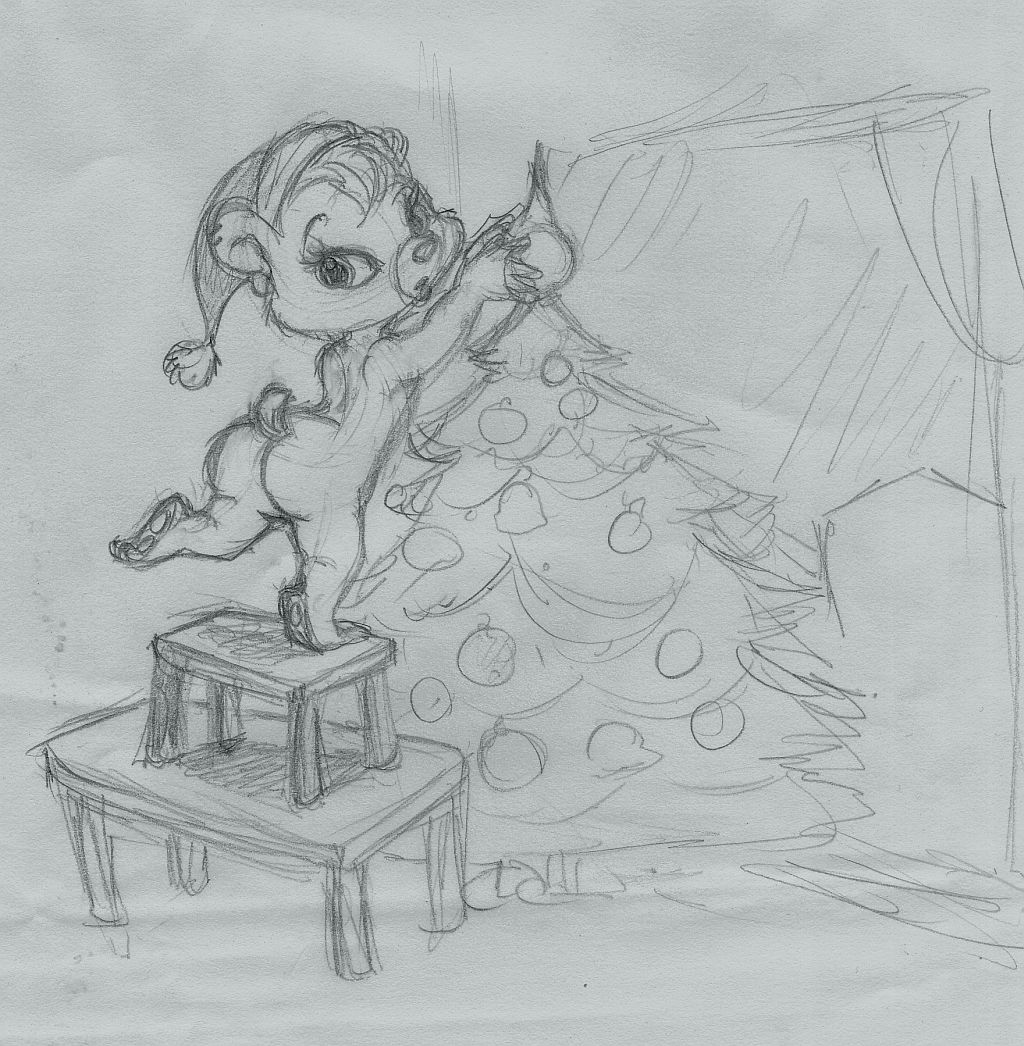 Â My friend and retired post office delivery man Juan Alfonso, did this little pencil sketch for me featuring one of his cute little bear characters. She’s putting the topmost ornament on her tree. Juan is a fixture in furry fandom, he’s drawn many comics for fanzines. I don’t know if he’s done much on the Internet, but you can always Ixquick him. Juan lives in Miami, Florida. He sent me an old Willie Whopper pencil box for Christmas along with this drawing. If you go to Jerry Beck’s Cartoon Research blog, you can find a picture of it there. The Whopper pencil box features scenes from “Davy Jones’s Locker” one of the CineColor Whoppers.

Â In Felix from 7-23 to 7-29-1934, Felix is enslaved by the crook into helping him with his burglaries. In the 7-25, it’s a little chilling to hear how dispassionate the crook and the cop are about drowning their cats. The attitude toward felines has definitely softened since Felix’s heyday. In the Sunday, 7-29, Felix is stranded on the abandoned ship and finds that he has company: a crowd of hungry wild animals! Felix is forced to toss them the ship’s food supply to appease them. Maybe next time the animals will be ready for a Felix feast!

Â In Myrtle from 4-26 to 5-2-1948, Dudley Fisher pulls a lot of his switcheroo gags. My favorite is the 4-27, as Myrtle’s parents try to figure out which one is the most intelligent while Myrtle hangs out in the backyard with Bingo. I like the 4-30 as well: Sampson’s pop foils Freddie’s boast that he can out run him in a race, by stealing his bathrobe! This is what I mean by a switcheroo, it’s unexpected that Sampson’s pop would resort to bathrobe robbery to thwart a potential defeat. The Sunday page is beautifully organized, as Slug’s car breaks down and the whole town’s talking about it, including the gas pumps! 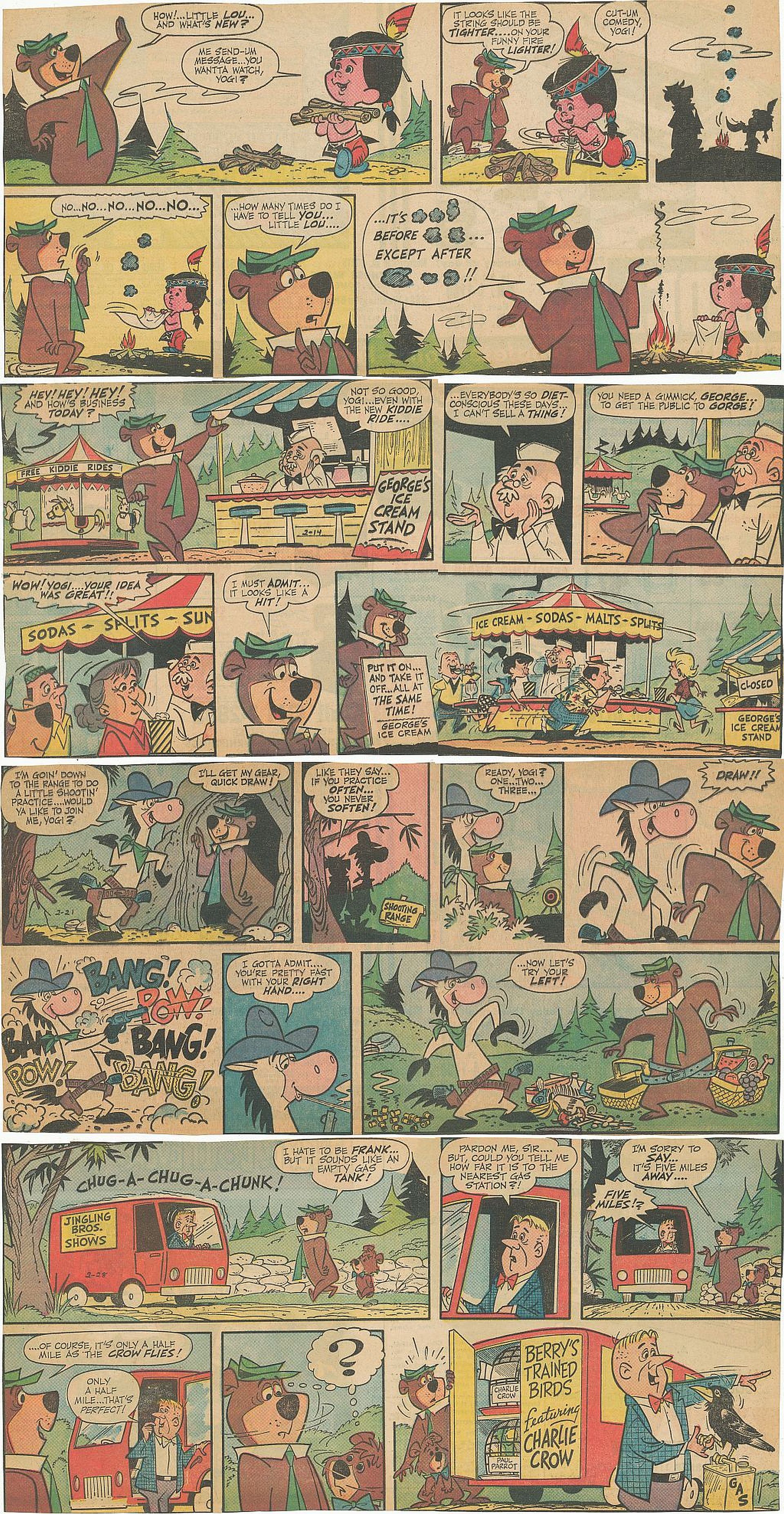 In the next week or so, Yowp at www.yowpyowp.blogspot.com will be putting up these same Yogi pages in the half-page size in black and white, from Canadian newspapers. So keep checking in with the old dog, he never disappoints (he’s a pointer, not a disappointer). C U Soon.