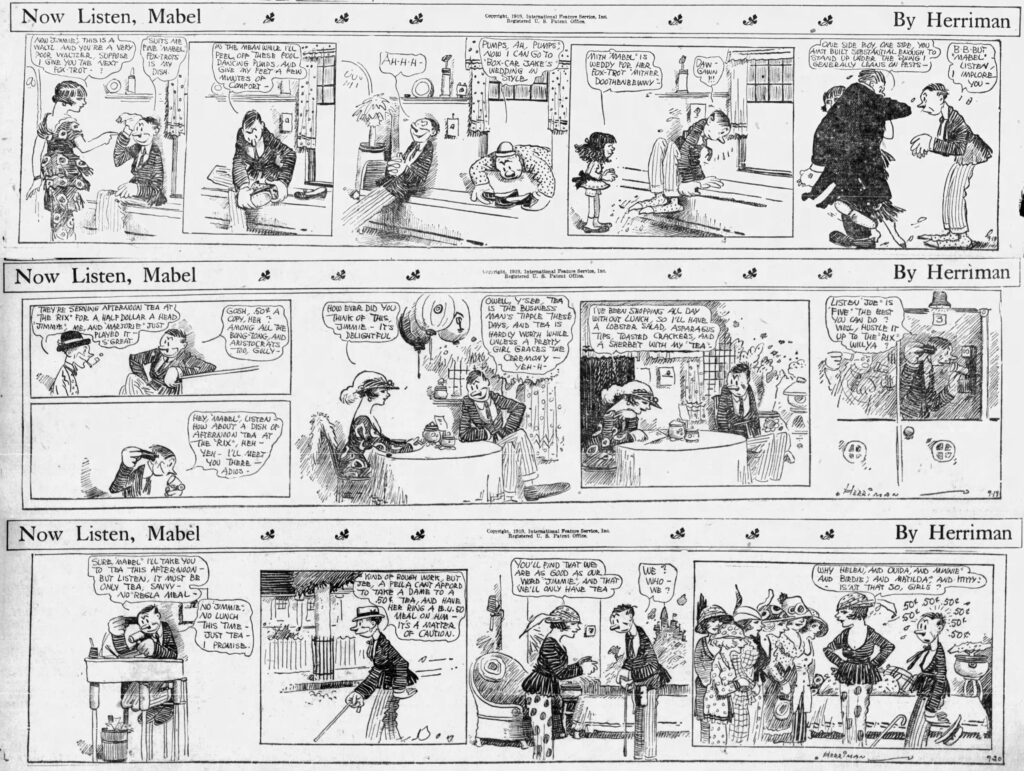 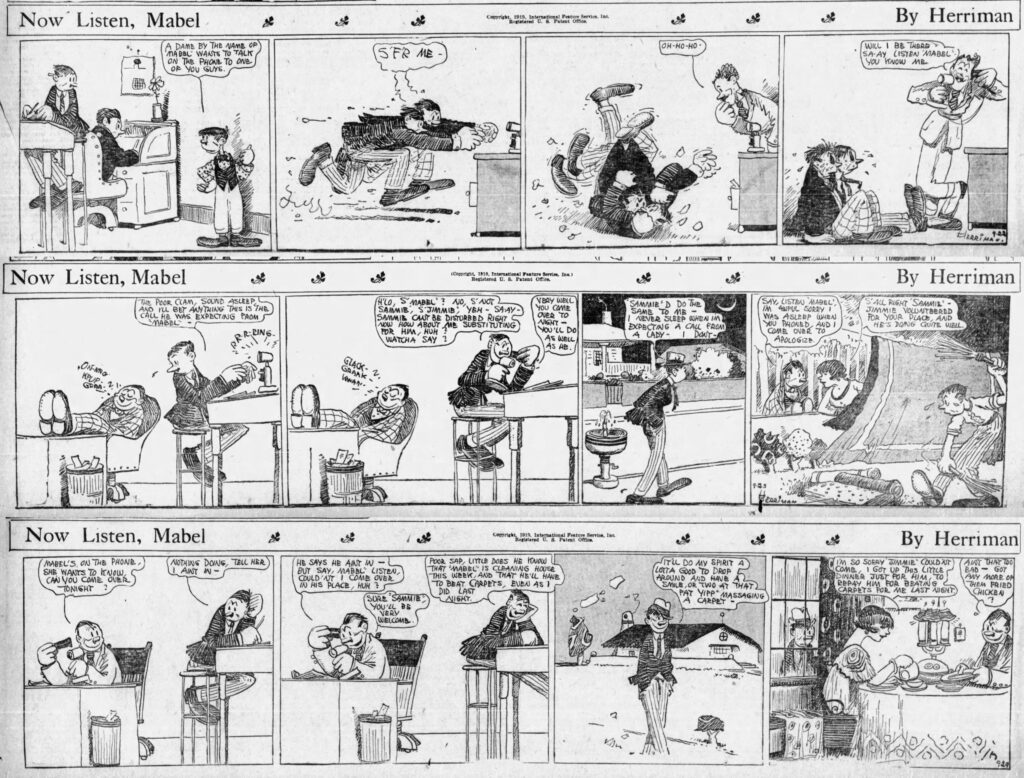 Here’s “Now Listen, Mabel” from 9-18 to 9-24-1919. “Mabel” seems to me like a forerunner of “Blondie” in the early 1930s when Blondie and Dagwood were courting. The 9-20 strip is especially close to the writing in “Blondie”, as Mabel seems determined to spend all of Jimmie Doozinberry’s money, even at a tea date for two! Also the 9-24 has a Chic Young situation, as Mabel winds up with “Sammie” at a thank-you dinner she is supposedly throwing for Jimmie. Mabel is not quite the ditz that Blondie was in the early 1930s, however. She seems just a bit craftier, and is more deliberately playing the field. I also like the way Garge depicts office life in 1919, with simple desks all grouped together in a big room, no partitions or cubicles in those days. The big boss was the only guy who got an office with a closable door.

Magnifying these images is still a bit of a chore. But there may be a “built in” magnifier in the blog, just pass your cursor over the images and they “may” enlarge in a small window to the right of the comics. If that doesn’t work, just open them in a new window. You know how, don’t you? Enjoy!

Felix Goes Under the “Blanket Code” 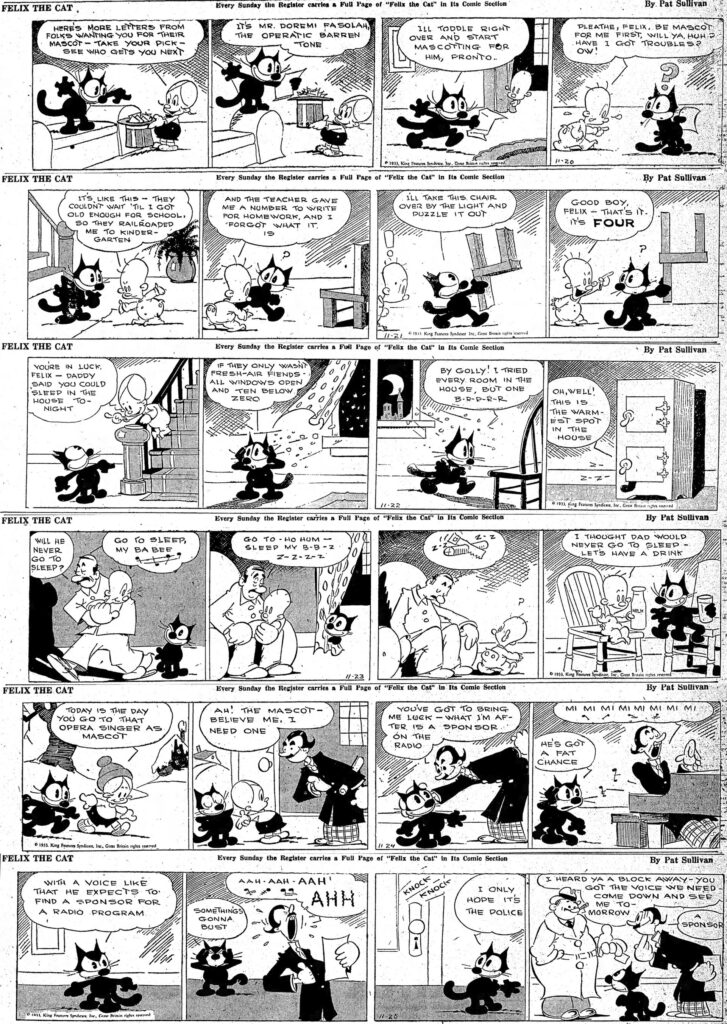 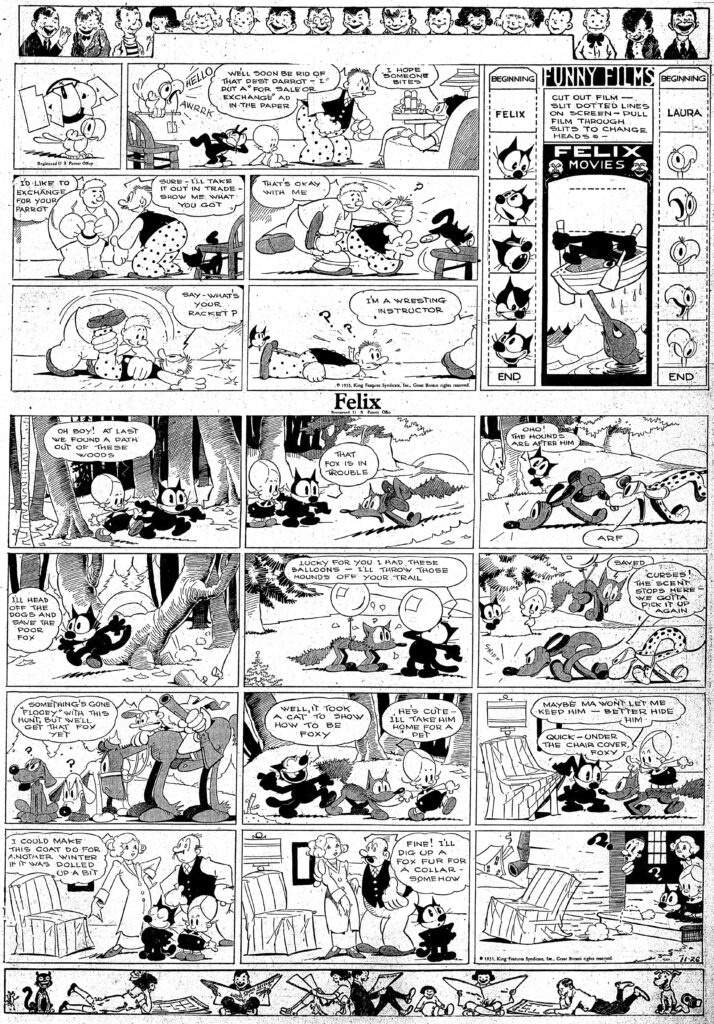 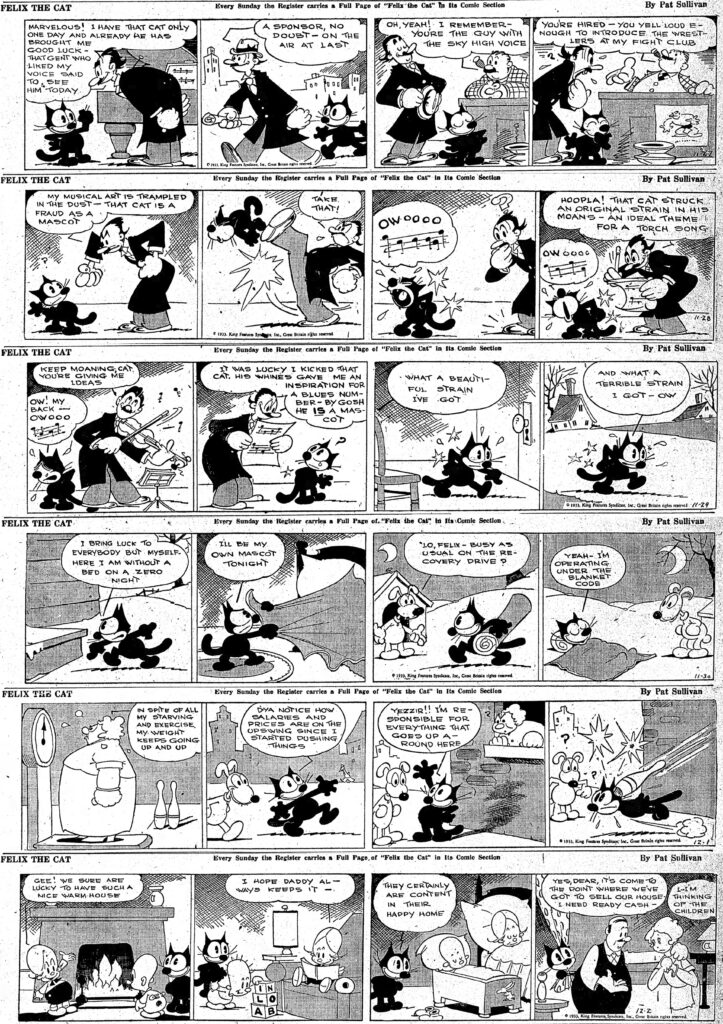 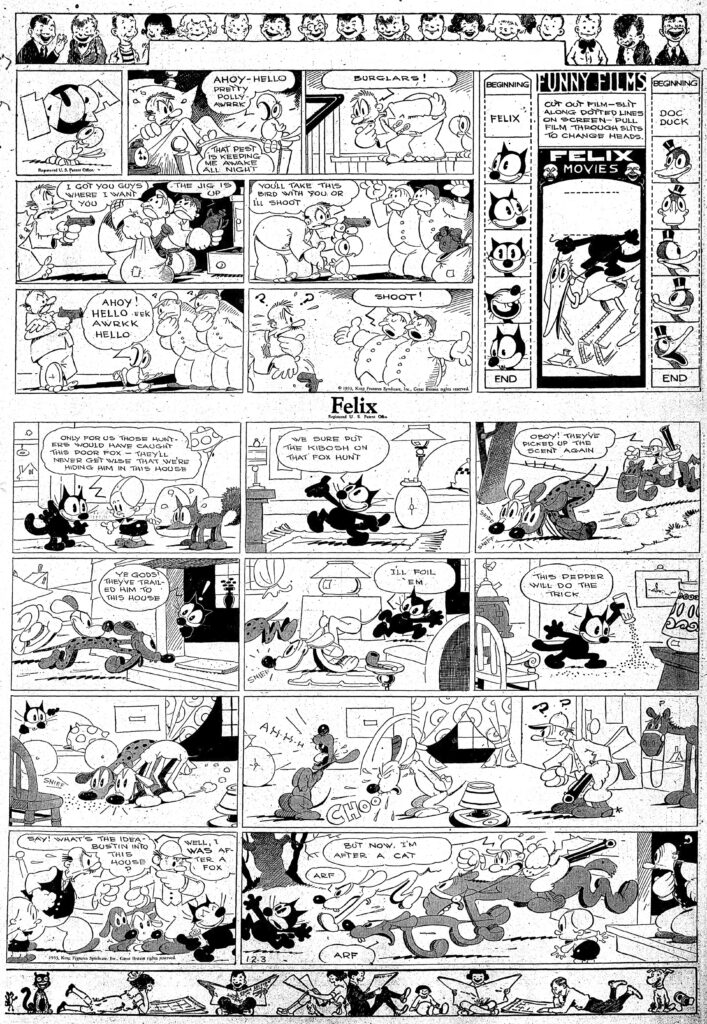 Felix this time is reprinted from 19331120 to 19331203. Felix is once again hired out as a mascot to Mr. Doremi Fasola, the Operatic “Barren Tone”. Mr. Fasola cruelly kicks poor Felix, resulting in yowls and moans that sound like music to Fasola. In the 11-30 and 12-1 strips, the Depression really comes to the fore. In the 11-30, a dog remarks to Felix: “..busy as usual on the recovery drive?”, to which Felix replies, “Yeah, I’m operating under the blanket code”. The Blanket Code was an early version of the National Recovery Re-employment Act, which was generally adopted in July, 1933. Among other reforms, such as making child labor a crime, it set minimum wages at between .35 to .40 cents an hour in most jobs. It’s hard to even conceive of wages that low in our inflated age, but that’s what they were. By August 1933, the NRA code “Blue Eagle” signs were printed and posted in merchant’s and employer’s windows to show that they honored the minimum wage standards and the other labor standards covered in the Blue Eagle guidelines. These helped put a floor under the plunging economy in the mid-1930s. By the end of the thirties, the Blue Eagle was no more, ruled unconstitutional by the Supreme Court. You can look it up. In movies of the 1930s, you will often see the NRA Blue Eagle at the beginning and end of a feature picture. In the Sunday pages, Felix and Danny emerge from the woods and their adventures with the bear family, to intercept a little fox being chased by hounds. Felix shows his cartoon license and breathes in oxygen and exhales helium in to balloons which he attaches to the little fox, lifting him out of the hounds’ path. The fox has one word of dialog: “Saved”. In the 12-3, Felix distracts the hounds with pepper, but the huntsman decides to pursue Felix instead of the Fox. If you want to see the comics larger, just pass your mouse over the comics and right-click to reveal the command: “Open image in new window”. When you have a new window with the comic in it, you can enlarge it and read it more easily. Enjoy!